The new toy is an incredible piece of electronic genius. Our daughter's new watch keeps time and so much more, such as calorie burn, steps taken, iMessage, among other things, and on a swipe screen. It is a long way from the wind-up wrist watches we used for so long. This watch is almost anything but a time piece, as my grandparents called a watch or clock. It may be the only type of watch that our grandchildren know.
My mother had a watch which her father brought home to her one autumn after he sold the season's salt fish. It had been a good season and Granda settled his account but had more money than usual left over. He bought the time piece as a surprise for Mom who wore it proudly to school that year.
As a child, my husband, Rick had a new watch and he was so proud of it. He said, "Dad, this must be a good watch because the tick is so loud."
I remember whilst in high school, I wanted a watch with a black suede strap for Christmas. This was in the days when watch straps, bought separately, were not very common. Mom and Dad went all over St. John's to buy that watch for me. The watch outlasted that strap and I still use it today.
Mom and Dad had a new battery-operated watch for my brother, Francis, for his birthday when he was a teenager. This was the first electric watch in our house. Mom asked, "What happens when the power goes off?"
Then there's the clock at my Grandfather Pretty's house. The sound startled you at first, but it grew on you. It was my grandfather's mantel clock, that told the hour with the appropriate number of chimes and the half hour with one. Pop wound the clock every day, not considered a chore in those days because that was what everyone did. This mantel clock had a winding key.
That chime was comforting during the night when you woke. It broke the quiet, so that you did not feel alone. However, the most comforting part was its tick tock. Often inaudible when the residents of the house were busy, the same sound was drum-like when the room was quiet. This audible passage of time filled such moments with company. Sometimes though, depending on your frame of mind, the tick tock sounded like a roar. At such times, one left the room, too preoccupied with the ticking to endure it.
Rick's grandparents, the Mercers, had such a clock on the mantle as well. We have this clock now though it is never wound. We have it for its sentimental value. 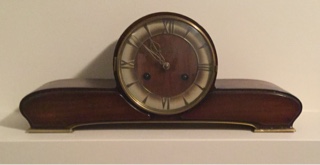 Aunt Marie Smith talks about the one alarm clock the Smiths had in their home when she was young. Every night her father, Ern, took the clock upstairs to the bedroom, wound it, set the alarm. In the morning, he took it downstairs where he wound it again. Marie described this daily ritual to her young grandson.
His response was, "What do you mean by wound the clock?"
Posted by Marie Smith at 16:39

December 2015
My Grandmother (born in 1900) had a mantle clock, and I remember loving the sound that it made on the hour and on the half hour. Wonderful how memories linger....
I loved her clock.
Sending you hugs and wishing you a beautiful year.
Jackie

Same to you Jackie. Those clocks had personalities of their own, didn't they?

Merry Christmas to you too, Angela.

Your post about watches and clocks brought back some memories for me too.
My parents gave Hubby and I a clock that used to be on their mantle. I always loved it, with its tick tock and bonging chime every 15 minutes...loved it until we had it in our home. the loud bonging every 15 minutes drove us nuts and we had to stop it. Now it's just a decorative piece on top of our hutch. I think it hurt our parents feelings but we just couldn't take it any longer.
I think I will have to photograph it sometime and show the world. It really is quite lovely.

You should take a photo and write about it. Those clocks are from another time and it is a nice reminder of those times I think.

Yes I definitely need to do that.
I keep forgetting about it.
Perhaps I will have to wait until the letter T on ABC Wednesday.
Thanks for visiting my blog.

Oddly I hated the grandfather clock we got from my husbands parents. His father was blind and liked hearing the time while I hated to be reminded of each hour's passing.

I love the various ways that people experience the same thing. Variety is what makes life so interesting. What is comforting for one is a nightmare for another. Imagine how boring if we were all the same.

I have a love/hate relationship with clocks as age and they track the passage of time. I cannot bear a chime clock in the house. It just makes me sad. I know that I am a bit of a freak of nature, but I got rid of the grandfather clock years ago. By the way, thanks for stopping by.

I could take such a clock but not my husband. It is easier to look at than get accustomed to it.

My MIL collected clocks, mostly wall and grandfather. There was ticking in every room, sometimes from more than one clock, and they were not synchronized, so it was non stop ticking. Not all had chimes. Some had chimes louder than others. Across from the dining table was a Seth Thomas wall clock. I looked at that clock so often that when I became pregnant with my second child we decided to name him Seth if it was a boy. It was a boy and we did name him Seth. Sometimes I think Huck Finn would have worked too but Seth fit him just fine.

It is amazing to me how many of us have a clock story. Thank you for sharing yours, Barbara. Loved it!

Time is a mystery, I agree, Baili.

hope all is going so pleasant in your lovely world dear

I so enjoyed your clock stories. My son has a mantle clock that belonged to my mother-in-law. My daughter has a rare wall clock from her as well. My first watch kept burning my arm. It had been a Christmas present from my parents. I told them it was hot but they said I would get used to the feel of it. When a blister formed on my arm they finally believed me. They took it back to the store. The store sent it back to the manufacturer who said they found that the tiny drop of lubricant had not been put in during assembly. I got a new watch.

Imagine a blister from a watch. Incredible, Emma. Thanks for visiting!

have a lovely days ahead along with joy and peace

thank you so much for kind words dear,hope all is blooming peacefully in your pretty world