It has been a busy few days. With the preparation for Christmas all done, we settled into the event itself. And what an event it was! Two pre-schoolers make the excitement of Santa real again as they marvel over every item of clothing, piece of candy or toy. Unlike their mother as a child, they love getting clothes for Christmas. And their excitement over an orange and an apple in their stockings was something to see.
It reminds me of the stories of friends and family, such as my mother, who was thrilled with an orange in her sock on Christmas morning. An orange was an unusual item in Newfoundland in those days. It was a treat to have one yourself as they were often shared among the family members.
Except for Granda Brien...The stories about him live on in our family history seventy-five years after his death. The stories were told by my mother, Mary, who loved her grandfather very much. One story came from the times Granda accompanied his family to visit neighbours after supper to listen to one of the few radios in Maddox Cove, Newfoundland. 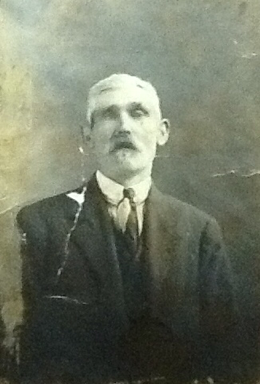 Granda Brien
One evening in particular stood out in Mom's memory. On this evening, everyone gathered to listen to the program, The Adventures of the Irene B. Mellon. The musical program told the story of a fictional schooner and her adventures around the world. Neighbours gathered together to listen to the program, written by Jack Withers. Everyone looked forward to those evenings.
This was during the 1930s and times were tough. Rarely did the group share any food because people did not have anything extra to share. However, this night the hostess had an orange which was quite rare indeed. She saved it for the occasion to share with her guests.
She sectioned the fruit, and started with my great grandfather, saying, "Age is honourable," as she passed the plate of orange sections to him.
Granda took the plate and said, "Thank ya, moy dear," and proceeded to eat the whole orange. The others looked on with mouths watering as Granda ate the orange. Nothing was said.
When his family told him later what he had done, Granda was embarrassed . "Why didn'a ya say someting. I was delighted tinkin' t'was all moine. An' it was some good too."
You can imagine that food never appeared during the radio broadcasts again.
Poor Granda, I doubt he ever had a whole orange for himself. He thought he had the world and enjoyed every section.
Here in Prince Edward Island, after the flurry of activity the last few days and the weeks of preparation leading up to Christmas, it is time for a day of rest. With leftovers on the menu and an orange for dessert, the most stressful thing we'll do today is take the dog, Georgie, for a walk. With her visit, we will be busy enough.
Posted by Marie Smith at 03:49

That's a wonderful story. Poor Granda! He couldn't do anything any differently once it was gone, and he enjoyed the entire thing, for once in his life. You're a good writer, Marie! More, please. :-)

Oh, my, an orange in the toe of a stocking ! You took me back to my very own childhood. That was always there with walnuts in the shell and an apple or two. Thanks for the memory.

An orange was a standard item in many stockings it seems.

This made me smile!
God bless him....
I remember the days of listening to the radio....and enjoying every moment of having a radio and being able to listen to it.
Memories here in this post. Many memories!
Sending you and yours hugs and wishes for a blessed 2015.
Jackie

Jackie, thank you for the well wishes. We wish the same for you and your family.

What a fine anecdote. How wonderful that you have these stories in your history and repertoire.

Everyone has stories to tell. It's a matter of finding your voice to tell them.