It is early December and winter is already settling in this year. The combination of snow and Christmas decorations at the sport facility is a shock to the system this morning. 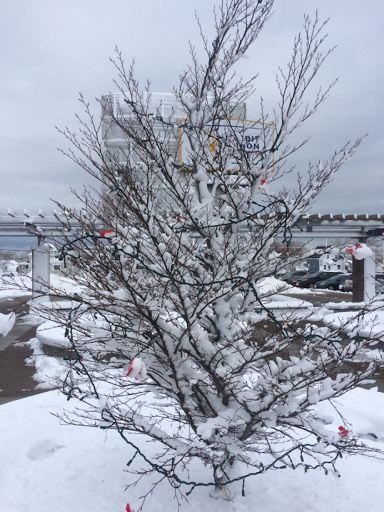 I have not come to terms with the advent of either this year.
As I do the laps of the walking track, on the main ice surface young boys are playing hockey, with one team blanking the other by seven goals. At the end, the teams shake hands, then line up for the announcement of the three stars of the game. Afterwards, the Zamboni clears the ice and two more teams take their places. 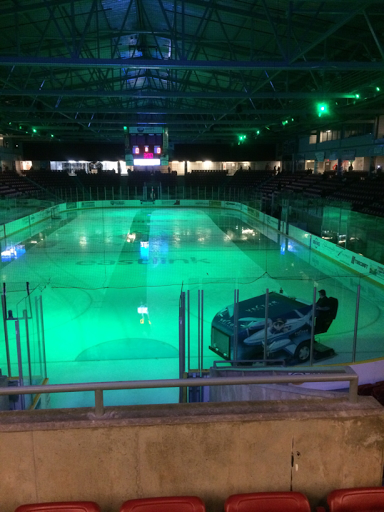 Each team member is announced with great fanfare and in the stands, parents use noise makers to salute them. This game has two girls' teams, about the same age as the boys, facing off for three periods of twelve minutes each.
The girls practise for five minutes 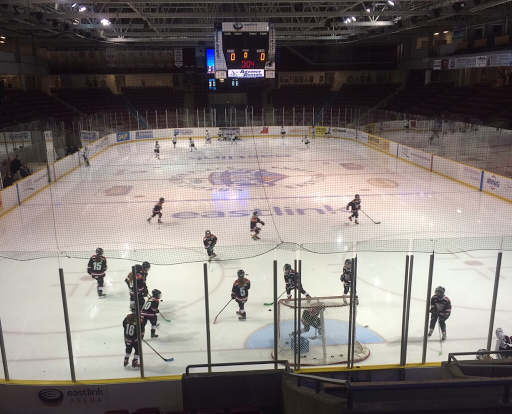 then do a group cheer.

There is no body contact in this game; the most serious thing that happens occurs when girls trip over sticks or get caught in another's skates. Many girls are good skaters and have the concepts of their position on the ice and their role.

It is interesting to watch them as they play. In the stands, parents talk about how their girls are improving as the weeks progress. 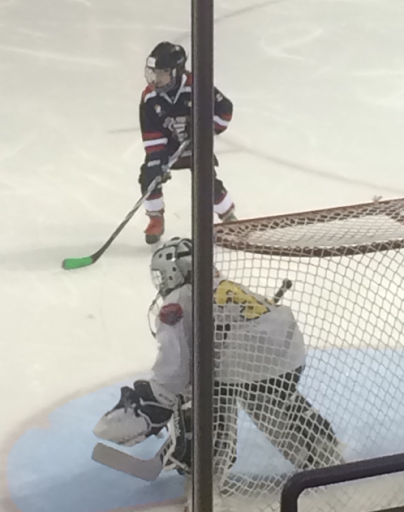 This is a Canadian moment. It is a country where Saturday nights are sacred for their worship of hockey icons. Watching the National Hockey League games becomes the focus of many social gatherings or quiet nights at home. Backyard rinks are being readied in our neighbourhood over the last few days as the temperature dropped. Road hockey is a way of life the remainder of the year. Canada is a hockey nation in a big way!
Our family has never understood the hockey craze. My husband is not a sports fan and neither am I, though I was as a teenager. Our daughter and her British husband are football fans, or soccer as North Americans call it. That is the extent of our interest in spectator sport. We did not get the gene for interest in hockey.
These parents spend their Saturday morning at the rink, where they use the noise makers and shout occasionally, as they cheer on their girls. Discussions of an up-coming tournament which will take them out of town next weekend, occur between cheers. These hockey parents are dedicated, investing time and money in pursuit of the puck.
Outside the rink, the Christmas decorations reinforce the hockey theme. 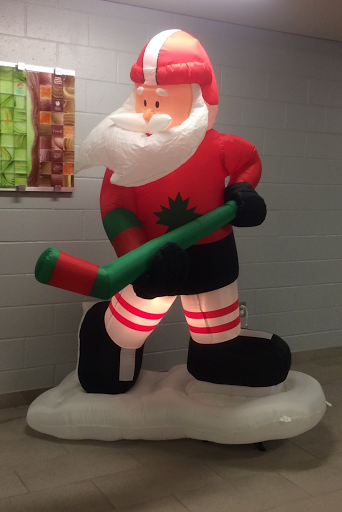 You don't get any more Canadian than this. 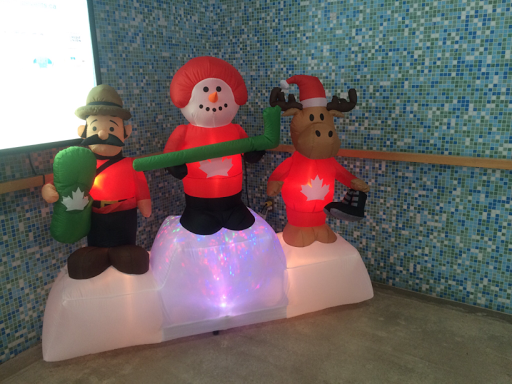 Reminds me of another Stompin' Tom song. The Hockey Song. "Hello out there,we're on the air,It's hockey night tonight"! Hockey Night in Canada still is the number one TV show in the land.

Just looking at your photo of the snow scene makes me feel cold!
I had not realised quite how much enthusiasm there is for ice hockey in your part of the world.
Lets hope Santa does not get so carried away with the hockey that he forgets he has a lot of presents to deliver Christmas Eve. (I was trying to work out if he is an inflatable Santa, or if he made of plastic).

It should have been the music for the Canadian NHL I think.

Inflatable decorations are everywhere these days, even at the sports complex.

Yeah hockey! Both my older grandsons (7 and 6) are learning to skate and play hockey, which is great for them, as we are not a skating and hockey family. I never learned to skate.... don't have the skating gene I suppose, being born in UK nowhere near a skating rink. When both sons lived at home, I used to watch Hockey Night in Canada with them, but since they moved away, I don't really follow it. But given the chance, I love going to Leafs games.

When I was in elementary school I followed the Leafs. They won the cup in those days. I've never been to a NHL game but would like to go. I'd never pay my husband enough to do that however.

Hockey Night in Canada was sacred in my house when I was a kid growing up. I'm still a hockey fan all these years later. I envy these little girls today who can learn to play the sport. In my day, it was forbidden for girls to play hockey. At most, girls could play ringette but not the National Sport itself. Glad things have changed!

It is just understood that girls play and it was wonderful to see them. Women's olympic hockey has helped I think. There are wonderful role models for the girls today.

Somewhere in Ottawa, my grandson is playing hockey right now, and the girl had skating lessons this morning. Otherwise it is not winter-like here.

There was figure skating on the other ice surface that day as well. The scene repeats itself all over the country.

Many things unite us.. hockey is certainly one of them. The only thing that could make that last image more Canadian is a cup of Tim Horton's coffee. ;)