The year was 1977. We were married the previous year and teaching in Buchans, Newfoundland. On a weekend trip to Corner Brook to visit Rick's parents, we saw the movie Star Wars at the Majestic Theatre with Rick's Uncle Carl and have never forgotten it.
The cantina scene in that movie is my favourite scene of all time. It was memorable because of the many species of aliens sat around in the bar and the bartender telling C3PO that droids were not welcome. Then the bar fight, a light saber, the master and his young protégé were all reminiscent of a wild west saloon with weapons of the future and an incredible cast of characters.
Looking back almost forty years later, I appreciate the cantina for the small amount of computer generated imaging, and the imagination and work of the creature designers and wardrobe department. They created an intriguing world that I would love to visit.
At the same time, my husband's Aunt Marie and her son, Jeff vacationed at Disney World in Florida with Marie's brother, Fred. They visited the usual tourist attractions and also saw Star Wars. One of the many items for sale at the gift shops was a Darth Vader mask. 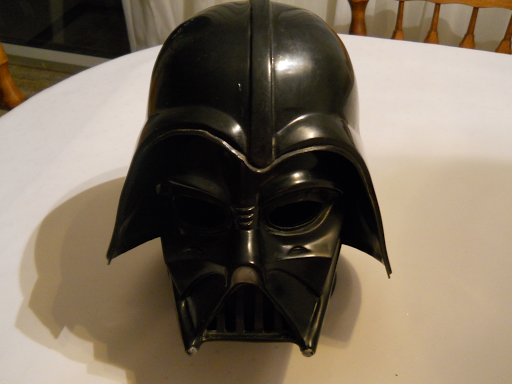 Jeff was eleven and wanted that mask with the desire that only an eleven year old boy would understand. However the mask was $40.00, a lot of money for 1977 and Marie had to say, "No."
That was when a doting Uncle stepped in and bought the mask for Jeff, a mask that still has a place in Marie's home. It honours the first Star Wars in the series and the new movie.
Rick and I will see that movie this week. I cannot imagine any scene will equal the original cantina scene from that first movie but maybe...
Posted by Marie Smith at 03:59
Email ThisBlogThis!Share to TwitterShare to FacebookShare to Pinterest

Jeff grew up and left home but Darth has always been with me. When my grandsons visit they always want to put on the mask!

Oh, I well remember that cantina scene too. I haven't seen the new movie but will wait until the furor dies down a little. Everything I have read says it's really good. And people have been really careful not to have spoilers. :-)

Yeah, that original cantina scene was fun! I'm going to go see the new movie too but not for a month or two until the crowds die down. I hate sitting cheek by jowl in a packed theatre.

They will associate Darth with Grandma.

It won't be at our local theatre for very long so we'll have to get there this week.

Lol. I know what you mean. Enjoy!

Ahhh... Star Wars, love those movies. My 2 sons and the 2 grandsons went to see the new movie yesterday, I have yet to hear whether they liked it, but I`m sure it was a success!
Happy Christmas to you and your family and all the best for blogging in 2016!

Where did you find this photograph of me?

Merry Christmas to you, Shammickite. I'll be reading you in 2016.

I just acquired it from a relative. I'll have to ask her! Happy holidays to you!

I am probably one of only a few who haven't seen the Star Wars movies.
I love the fact that the doting Uncle bought this mask for him.
Beautiful memories for you all.
Love,
Jackie

They are great memories. I can't wait to see the new one.

I think that Star Wars reinvigorated movies. Along with Raiders. Of course, perhaps it just reinvigorated me. We are due to see the next movie next week. We have tickets already, but we are expecting a major snowfall that day, and I'm not looking forward to driving into the city.