On a beautiful autumn day, my friend, Eleanor and I went to O'Leary, an hour west of Summerside, to buy some material for a project. O'Leary has a wonderful store for crafters, but that is another story. While in O'Leary, we drove by the Canadian Potato Museum, 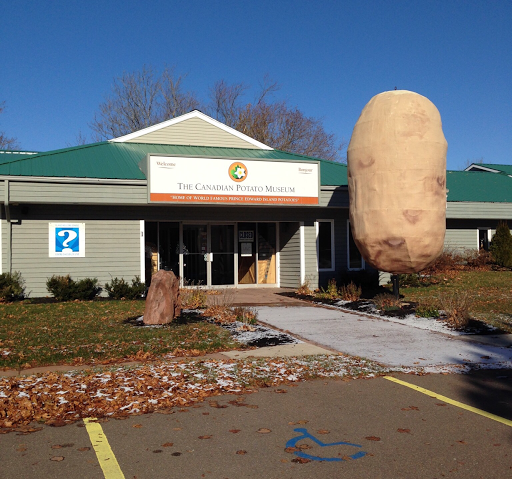 which I visited with my family years ago.
Potatoes are a favourite vegetable in our family. My husband and daughter are huge potato fans, and the type of potato has never mattered, Yukon gold, 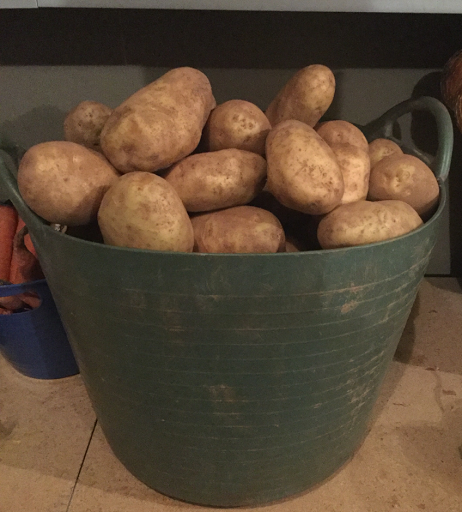 Russet or any of the new varieties; my family has never met a potato it did not like.
This museum details the history of the potato in Prince Edward Island and houses artifacts of course. For us, it was interesting and fun to see the history of the vegetable and the island that grew so many of those which we consumed.
Our family friend, Clara, was a potato lover too. Clara so loved the starchy tuber that if she did not consume potato during the day, she cooked and ate it overnight. She was happy when her family purchased a microwave because then she did not have to boil potato in the middle of the night. Any time Clara was asked out to dinner, she hoped potato was on the menu, to prevent her from cooking it later.
It is not surprising that there is a potato museum in a place which grows over a million tonnes of them every year. There are some serious potato lovers in this country! Two of them are in my family with two more in training.

There is a song about the potatoes from Prince Edward Island, by Canadian icon Stompin' Tom Connors. Tom was raised in PEI and wrote about "Bud the Spud...from the bright red mud." Tom is a Canadian gem, who wrote about life across the country he loved.
You can hear Stompin' Tom sing Bud the Spud below.

Posted by Marie Smith at 15:29
Email ThisBlogThis!Share to TwitterShare to FacebookShare to Pinterest

I love that one too. Thanks for the reminder, Marie.

I am a devourer of potatoes. The only ones I am not fussed about are the purple coloured ones.

We have a mural of Stompin Tom here in Carleton Place. He spent a few weeks here and composed a song. There's a little more info in the link if you're interested. https://flic.kr/p/nsf4Sc

I'll have a look. Thanks.

And wasn't Stompin' Tom born in PEI, in Skinner's Pond?

I always thought that too. However he was born in New Brunswick and raised in PEI. He considered Skinner's Pond his hometown.

Stompin' Tom certainly got me tapping my foot. I have grown many type of potato, including the Yukon Gold on shown (a heritage variety originally from Canada. )I found them to make an excellent baking potato, nearly as good as Picasso's. I one grew some Salad Blue potatoes, but no one would eat them as they were put off by their colour.
The best place I have found to eat baked potato's is the Baked Potato shop in Edinburgh, though it is many years since I was there (it's worth googling).
And finally, did you know that the toy Mr Potato Head was invented in 1952?

Stompin' Tom was a Canadian original, a toe tapper for sure. Rest in peace, Tom.

I did not know that about Mr. potato head. My granddaughters have one today. Lots of play value here.

Dinner isn't dinner if there are no potatoes on my plate! Definitely had potatoes with every meal when I was growing up in UK. My dad grew lots of them, and we lived off them all winter. I used to pick the pretty purple flowers!
Sad to say, I was a deprived child. My mum wouldn't let me have a Mr Potato Head toy.....because back then you had to stick the eyes, noses and mouth on a REAL potato, she said it was a waste of good food. Today the potato is made of plastic!

Potatoes were valuable food to our families when times were harder. Our family still values them.

All those years I believed misinformation!?!!

Tom had a difficult childhood but hard work made him successful. Here is a musical about his life which is quite good.

wow specially thank you for sharing the pic of potato museum,i myself and my kids are also huge fans of potato ,i think it is most eatable thing in this whole world easy to cook and very delicious in each dish ,loved the little angle enjoying meal and basket full of potatoes is teasing me to grab and make french fries

The potato museum is an interesting place to visit with small children too. There is a great play area outside. We'll take our grandchildren there this year.