Rick, my husband, had occasion to return an item to a local retailer one night this past week. Our car is parked in the garage on the side of the house, 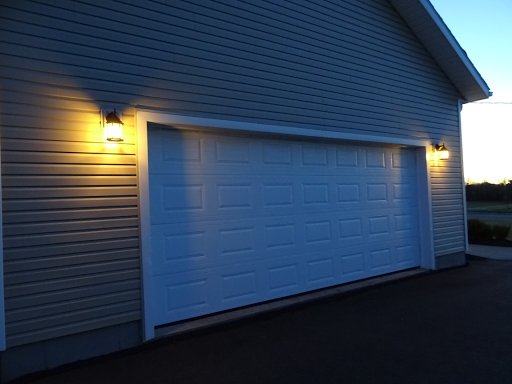 and if you turn on the garage light from the porch, the light stays on when you drive away. Not one ever to waste electricity, Rick never turns the light on in the garage as he exits the house. Sneakers are on the step of the garage and he picked out his sneakers in the darkness, put them on, entered the car and drove to the store.
In the parking lot, Rick bent to tie one sneaker. It was then he realized he was wearing one black and one gray sneaker which were not at all alike. 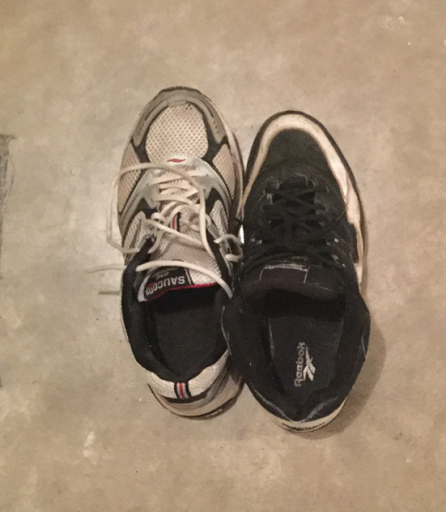 Rick proceeded to enter the store and return the item. It did not occur to him to return home because he is a fashion forward man after all. Before long others would be wearing similar footwear.
At the return desk, the clerk was serving another customer and having difficulty. Meanwhile, Rick tried to hide his feet as he waited. However, he was prepared to say to anyone who noticed his unusual footwear that he had another pair at home just like them. 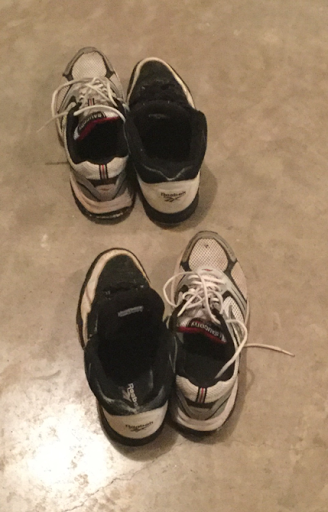 For the last year and a half I have suffered periodically with a painful right knee which I hurt doing exercise. Physiotherapy helps during those painful bouts. Between those times, I can do very light exercise but if I am not careful, I re-injure it. I need a more permanent fix. Meanwhile I am suffering through a painful bout now, having overdone it on the the treadmill again.
As anyone with knee or hip problems knows, getting in and out of a vehicle is very difficult. Entrance and exit can be excruciatingly painful and it reduces the number of times one is willing to suffer the pain. Not only do you reduce the number of outings in your vehicle, you also invent ways to cope, especially if you are driving.
Recently I drove to my latest physiotherapy appointment. When I parked the car in the limited space available, it was a major, painful effort to get out of the vehicle. Our car has unintended, self-closing doors and that day the door insisted on slamming into the good leg which was planted in a puddle of water. I attempted to lift the bad leg out of the car but to no avail. The anticipation of the pain precluded the effort. I was frustrated and ready to swear verbally which I was doing mentally. Meanwhile the door had hit the other leg several times by now as I continued to push it open.
The effort to lift the bad leg meant that I hit the horn somehow which alerted others in the area. Several attempts and several horn blasts later, I decided to lie in sideways across the passenger seat, keep my good leg out the door, and with some painful effort, ease the bad leg out as well. Of course the self-closing door hit both legs then. It took about five minutes to maneuver out of the vehicle.
At the end of the physiotherapy session, I mentioned to the therapist how painful it was to enter and exit the car. He looked at me and said casually, "Put the seat back."
Posted by Marie Smith at 03:56

We all have Homer Simpson-ish "D'oh!" moments like that, don't we. And hey, Fashion Santa has nothing on your husband!

It's not a bad idea to come home to a lighted driveway. Just sayin.

My knees aren't as bad as yours, but the right one troubles me when walking, and the left one doesn't like going up and down stairs.

Lol. Fashion Santa could learn a few things from Rick.

At least I have one good knee but the hip is painful on that leg. These golden years are for the birds.

Oh my.. as painful as that sounds, your physio's remark is too funny. Painfully obvious, eh? Have you tried it since.. and does it help? Or are both of your legs now just too battered and bruised to know?

Your husband sounds like a hoot, and his remark about the shoes is something my dad would have said.. and probably did. :)

Rick has a joke or story for most situations. He is a hoot.

Putting the seat back really works. Such a simple fix for something so painful.

Yes, you can always pull the seat forward again.
Oh, I do like these. Wonderful stories to keep.

It is amazing what an easy fix it is!

When I was recovering from surgery for a fractured hip I had the "pleasure" of a group of physical therapists. They were a tough bunch and I didn't get away with anything ... but they did the job ! Hope you both have a merry holiday despite mis-matches and pain !!

I'm sure we will, Ginnie. Any time with our girls is great.

Obviously your therapist has a honours degree in "Stating the Obvious"!

Rick is obviously a "Dedicated Follower of Fashion". Who remembers the 1966 single by the Kinks?
I hope your knee gets better soon. So you hurt it whilst doing exercise. I have always had a sneaking suspicion that keeping healthy is bad for you.

My efforts to stay healthy are slowly killing me.

It is from the Scarlet Pimpernel, isn't it? The song makes a statement about the fashion industry. Thanks for the reminder. Hadn't thought of that song in a long time!

I was playing some 60s records recently, twenty year old grandson listened for a while then said "is that what you used to listen to back in the day?". This "back in the day" saying amuses me.

And we walked to school twenty miles a day, uphill both ways!

That's one of those moments I have occasionally and never live down. Or forget. Love the story! :-)

Thank you. We may as well enjoy those moments!

What a delightful post.
I smiled at Rick's shoes....and his ready retort should anyone mention them. Clever guy, he is!
And....your predicament with your knee getting out of the car...I'm so sorry. But, may I add that I had to smile at the antics you endured through your pain as you tried to get out of the car. (Great reply from your physical therapist.)
Sending you another hug,
Jackie

Thanks for the hug. The day of the antics getting out of the car, I really needed it.