It's a Matter of Habit

Growing up in Newfoundland, in many communities, the people knew of the divide between Protestants and Catholics. In places like Petty Harbour, the two groups lived on opposite sides of the harbour. Other communities had people of one religious affiliation. In larger communities, you knew where the other group lived but you did not go to school with those children. Each group had their own denominational school.
As Catholics living in the St. John's area, my brother and I went to a Catholic school several miles from our home although there was another school in our neighbourhood. It was never a consideration for us to attend the nearby school even though walking to and from our own school was a challenge for us as young children. We had Presentation sisters at our school, with one as principal and our church in the same building.
Meanwhile, on the west coast of Newfoundland, my husband's family went to the Protestant school, knew who the Catholics were in their neighbourhood but did not affiliate with them. The Smith family home was near a convent and the family was accustomed to seeing the nuns in the area. This was in the days of the habits which covered the women from head to foot, leaving only their faces and hands exposed. You did not see their feet often so it looked as if they floated across the earth.
My husband's Aunt Marie and her son, Jeff, lived in the family home with her widowed father, Ern. 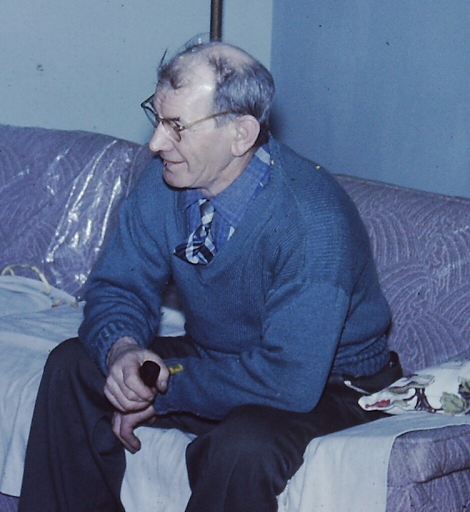 Mr. Smith had a Fix It shop attached to the house where he spent his days working on locks and keys, as his surname would suggest. Among his customers were the sisters of the nearby convent.
Jeff, a preschooler, loved his grandfather and spent every minute he could in the shop. One day, Marie went into the shop to find Jeff staring up at two nuns who were waiting for Ern to finish a key. When he saw his mother, Jeff ran to her and said, "Look Mommy. Batman."
Marie was shocked and speechless, not knowing nuns at all or how they would react. A split second of silence followed, then the nuns burst into laughter. It was a relief to the Smiths.
Hearing this story years later and having worked with them, I knew nuns as regular people. However, had I witnessed this incident as a child, I would have been surprised, even shocked. From my experience, I would have expected the nuns to be stern and to admonish Jeff. It just goes to prove that there can be a change of habit.
Posted by Marie Smith at 04:24

Have you ever seen those calendars "Nuns Having Fun" -- pretty hilarious! A few months ago, I read Alan Doyle's autobiography about growing up in Petty Harbour and he had a lot to say about the Protestant/Catholic divide too.

Didn't know about the Protestsnt and Catholic divide where you live.
What a great story about the Sisters being referred to as Batman. Glad they got a chuckle out of it. So did I.

There was a divide in Montreal too. Sadly. We still have Separate (Catholic) Schools in Ontario, which I think is very poor in the era.

Part of my family was from Petty Harbour so I know about it first hand. I enjoyed at book.

I did too when I first heard the story. The sisters I worked with would have enjoyed it as well.

The days of public funded denominational schools in Newfoundland are long over. It is peculiar that they still exist for one denomination in Ontario.

Lots of private funded denominational schools in Australia. In some capital cities your status is ranked by which school you attended and in others it's all to do with which football team you barrack for. This goes for all levels of society lol

Plenty of divide in the north of Ireland - think of the recent 'troubles'. I lived with it having a strong protestant (read orangeman) father and a mother who in a earlier generation on her maternal side had boys who were Catholics and girls who were Church of Ireland. The mother (my gt grandmother) came from a scottish protestant family and fought for this. Gt Grandad Doyle agreed feeling the girls would more than likely marry catholic boys so the children would be raised in that faith. My grandmother married a protestant (after John Joseph Patrick Doyle died). Not sure she would have got away with while he was alive!

"...a change of habit." A great closing to an interesting post. I am going to recommend your blog to my niece who spent part of her childhood in Newfoundland.

Wow---I can relate. I vividly recall when the two junior high schools amalgamated on that first day. It was in the early 70's, but we all very quickly became fast friends. It was very exciting times.

What a fascinating history you have. You must have many wonderful stories to write. I would love to read more of your history.

I welcome your niece to the blog, Ginnie.

Kids will be kids and just get on with it, won't they, if given a chance.

Some years ago I lived in a community where Catholics and Protestants did not have a good word to say about each other. I did not understand it then and I don't now. Oxford seems to be a very tolerant place, with peoples of many cultures and faiths living in harmony for most of the time. There is the odd occasion when some bigot will attempt to stir things up, happily that does not happen often.

I don't understand the religious divide either. So much strife happens in the name of religion in this world.

One town I lived in when I was a child was large enough to have a Catholic school as well as the public school. Protestant and Catholic children did not socialize with each other. I think we just did not make the effort to get to know the other group. As an interesting side note there were seven children in my family. Of the six who married five married Catholics.

Interesting that the two groups didn't mix where you were either, Emma.