Going through some pictures this week, I discovered this photo of a tall ship in Summerside, Prince Edward Island in 2014 to commemorate the Charlottetown Convention. 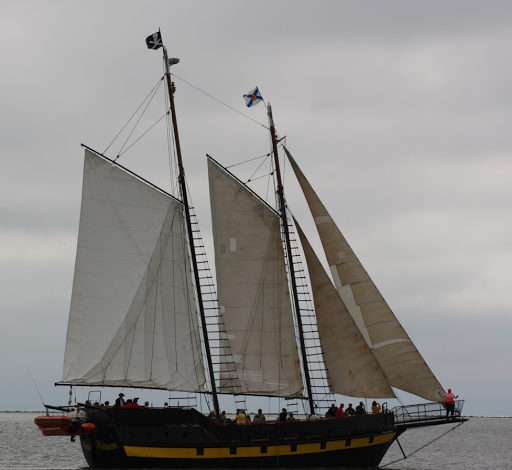 The convention marked the beginning of the process which formed Canada as a nation in 1867.
This ship has two staysails, triangular sails set forward of the foremast. The foremost sail is the jib which acts as an airfoil, reducing turbulence on the leeward or downwind side of the mainsail. It increases performance and stability of the vessel.
Newfoundland, a British colony until 1949 when it joined Canada, is steeped in British culture and traditions, though often with a local twist. One example is from the British Navy, where the wish, "Long may your big jib draw," is a holdover from the era of the tall ships and a hope that one experiences clear sailing. It is a common saying in Newfoundland as well, especially during Screech-In ceremonies when people become honorary Newfoundlanders and are wished lives of clear sailing.
The vessel also brings to mind the replica of the tall ship, Hector, 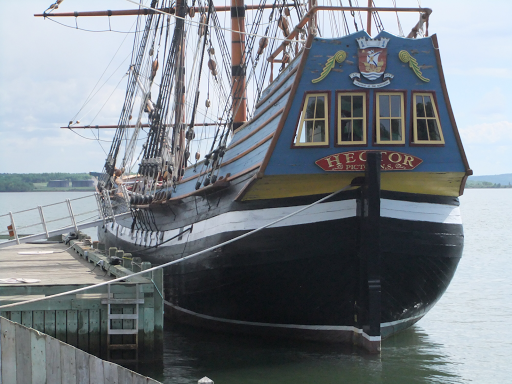 which we saw in Pictou, Nova Scotia. 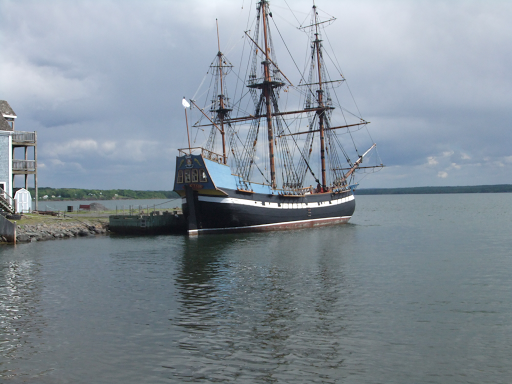 The original Hector brought early Scottish immigrants to the Pictou area in 1773, almost a century before Canada was founded.
One branch of my family is from the Scots in Nova Scotia. There was a connection to the Hector in that branch of the family and in the 1880s, one ancestor, Thomas Stewart, moved to Newfoundland. 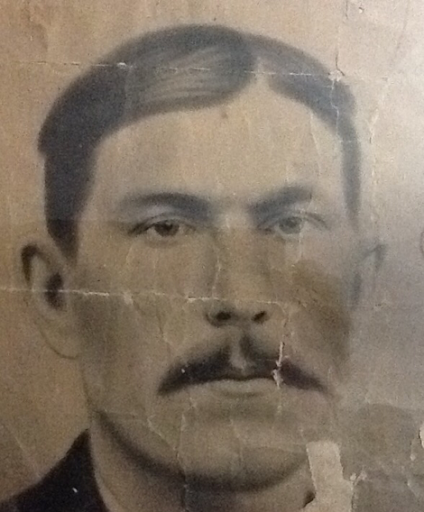 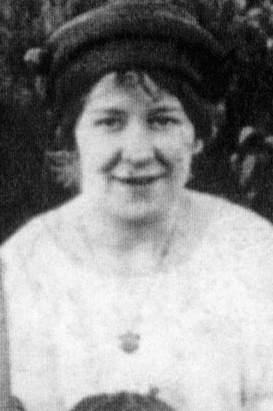 Ida Stewart
One can only imagine what conditions were like on that vessel in the North Atlantic in the 1770s, with cramped conditions, above and below deck. 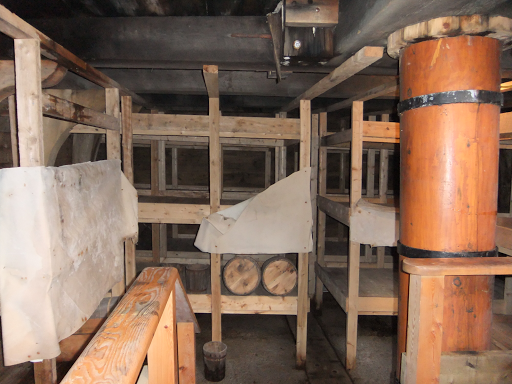 The vessel arrived in September at the height of hurricane season. How many ships were lost due to the storm-tossed Atlantic, sailing without the benefit of engine, weather forecasts or modern navigational aids? These were brave people, looking to better their lives, sailing into the unknown. 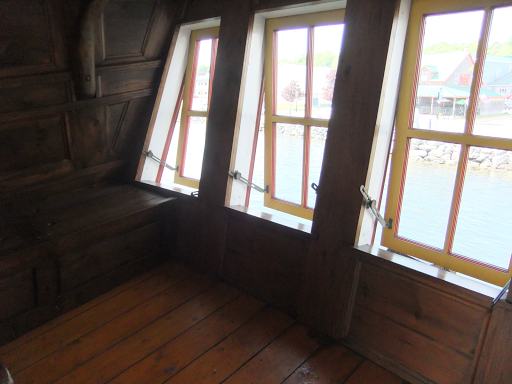 In a small way, they parallel the journeys of people making the dangerous ocean crossings today, in lesser vessels, looking for better lives for themselves and their children. The immigrants who formed Canada and other nations were hardy, brave people, taking risks to improve their lives. 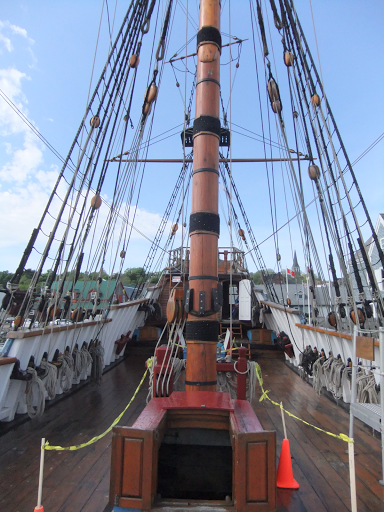 We are seeing a reflection of our own heritage laid out before us today in the travails of the millions of refugees searching for safe homelands.
In keeping with my own immigrant heritage and my Newfoundland culture, I say to each newcomer to Canada, "Long may your big jib draw."
Note:
Screech is a rum associated with Newfoundland. It is a strong rum of forty percent alcohol by volume, 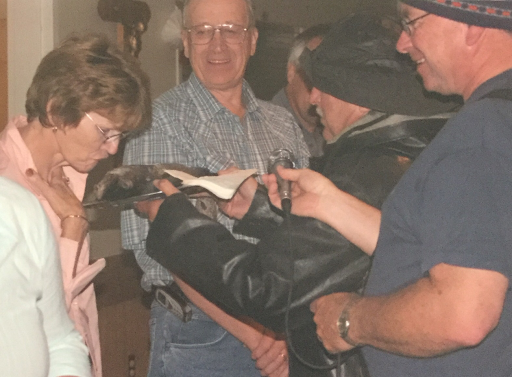 Kissing the codfish
which makes people "screech" when consumed. At a Screech-In, people say a verse, kiss a codfish, then drink a shot of Screech. 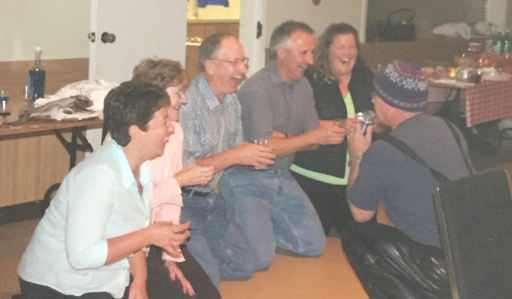 Some Prince Edward Islanders trying Screech
The ceremony is popular among tourists and is performed at bars or privately with local families. 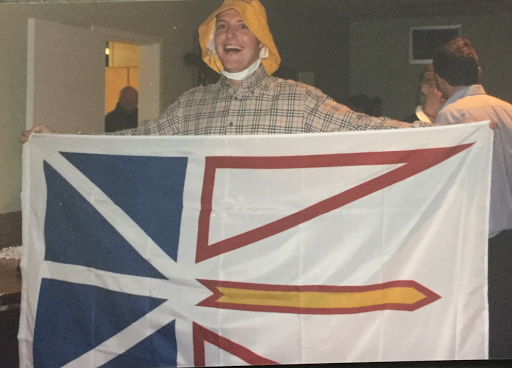 My goodness, I just learned a lot about Newfoundlanders and how they got here! I never heard of Screech before, either! :-)

I'm looking forward to going to The Rock someday and getting screeched-in!

Those ships sure are a fine sight, they must look splendid in full sail. You say the Hector brought over Scottish immigrants, I wonder if the ship was named after Sir Hector Maclean who died in battle 1651 (family connections, hence the interest).
What a wonderful saying ""Long may your big jib draw." I am sure there are many more nautical sayings, but perhaps some of them are not suitable for a family blog!

I love reading your blog. Canadian adventures can skip the Screech for me. LOL What fun.

Newfoundland, like other parts of the world, has an interesting history and I love to write about it.

Debra, i hope you get to visit Newfoundland at some point and become an honourary Newfoundlander as well.

I can't find anything about who the ship was anmed for. I wonder was it your ancestor? How are you connected to Sir Hector Maclean?

Mage, any time I have seen a Screech-In, it is hilarious. Screech is not for me however.

I'm so glad you like the blog. It gives me encouragement to continue. There's so much to write!

I can't even imagine the work involved on those ships.

I have visited the Rock so many times, but have never been officially screeched in, however I do have a small bottle of screech in the kitchen cupboard, maybe I should do a DIY screeech-in, but it probably wouldn't count!
I was in Halifax back in 2000 when they had the tall ships there, wonderful sights, perhaps I should scan the photos and post them one day,.

"Long may your big jib draw." What a fine expression and wish.

I have not delved much into my mother’s family history, although the research has been carried out by a member of the family, but I remember my mother telling me that one of her ancestors hailed from the Maclean Clan. She told me that the Maclean’s had a slogan “Another one for Hector”. Now to me it sounds like a toast one might here in a pub, but when I look further,I see it is more of a battle cry. In the battle where the chief of the clan Hector met his demise, seven brothers took it in turns to protect their chief. As each brother lost his life, the next brother stepped forward saying “Another one for Hector”.

You should post those photos. People love those ships.

It is a great expression for sure.

I read that about the seven brothers. Very interesting history.

This ship was built in the Netherlands but I can't find too much more about it. Wouldn't that be incredible if it was named after your ancestor?

I'm afraid that my Screech days are in the past ... but I'd love to take a jaunt in one of those beautiful tall ships. I agree that they were very hardy people to make those treacherous journeys.

A voyage on a tall ship would be exciting I think but as a passenger rather than crew member.

I've been to Novia Scotia and PEI, Marie, but would love to go back to see it all with new eyes...and maybe even try the Screech! :)

There is a lot to take in on both islands! Thank you for visiting this blog.