It was a pleasant surprise to see two American black ducks busy in the river by the boardwalk during a recent visit. They were absent for months. 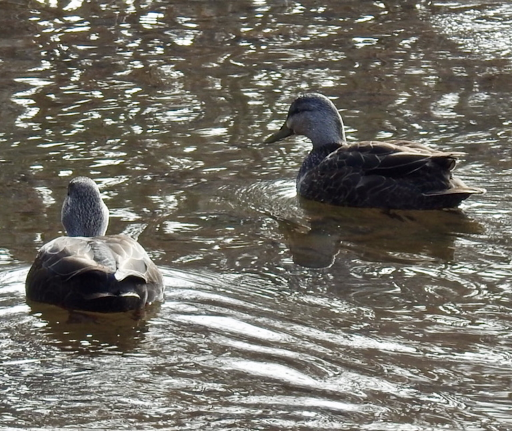 Part of the river was in the shade and it was difficult to see the ducks on the black water. My husband and I watched them for a time and they came into the light long enough for us to take some photos. 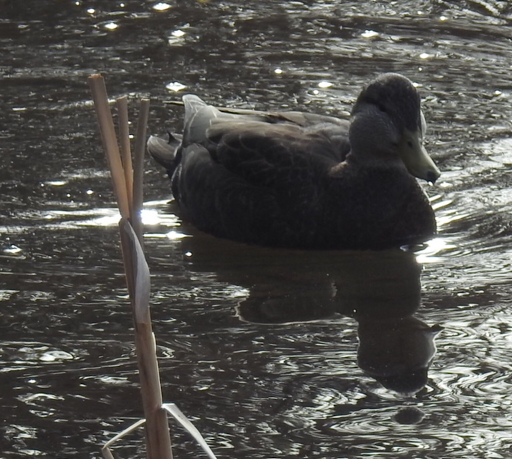 These are dabbling ducks. They do not dive but rather dip their heads underwater in a "bottoms up" motion to feed near or on the surface. 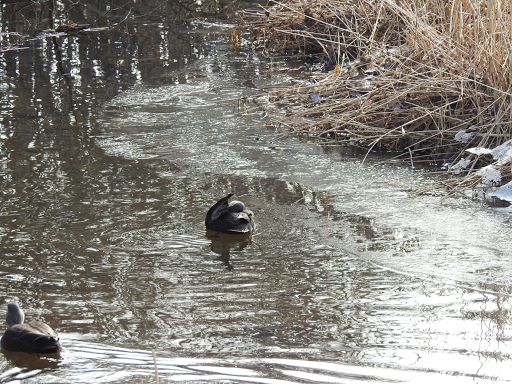 They are also know as puddle ducks, frequenting rivers and marshes rather than large bodies of water.
We were not as successful taking a photo of the beaver who shared the river with the ducks. There were beavers in this area early last year but the city moved them. They dammed a stream which flows into the river and cut many trees from the greenbelt in the process. Beavers have powerful jaws and teeth as testified by the stump which remains along the trail. 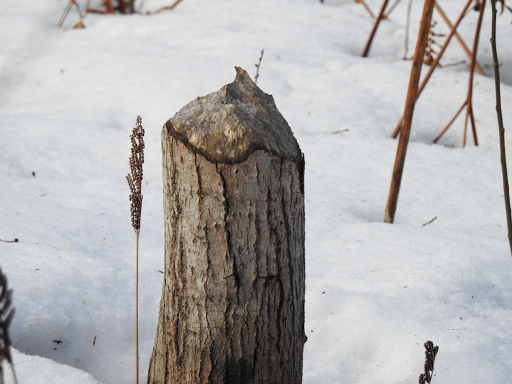 There is at least one beaver here again.
The beaver swam with its head just above the surface of the water but dived often, making it hard to find it again when it re-surfaced. I enjoy seeing beavers in the area, though I imagine it will be a short stay.
The variety of wildlife makes the boardwalk such a lovely place for a walk.
Posted by Marie Smith at 04:15

I've seen signs of beaver around here but never have even barely sighted one! Love the ducks. :-)

I hope black ducks mean spring is around the corner, not just nearer.

Oh golly....I would love to see some ducks...that would be such a hopeful sign of spring! Andrea

Beavers must be illusive, Jan.

I wish. We are having another storm tonight, Joanne.

There are lots of ducks around this winter, Andrea.

Ducks are a delight to me. It's always good to see them. I've never seen a beaver myself. That would really be something.

I'm not sure I have ever seen a beaver in its natural habitat, Marie, so you're quite lucky, even if you couldn't capture it with your camera. How fun. I am so delighted that you go out-n-about often to see what's out there. You inspire me!

That is a lovely place to walk.

I hope to see it again, Ratty but he'll probably be shipped out soon.

It really is, HW.

Thanks for dropping by my place today.

I always enjoy a visit with you, HW.