Hunter in the neighbourhood

It was a beautiful winter day and we expected to see squirrels on the boardwalk after the recent terrible weather. We were disappointed, not a squirrel in sight. Then we discovered the reason.
A red-tailed hawk was hunting. A few days before, we had taken pictures of a such a hawk with breakfast in her beak. 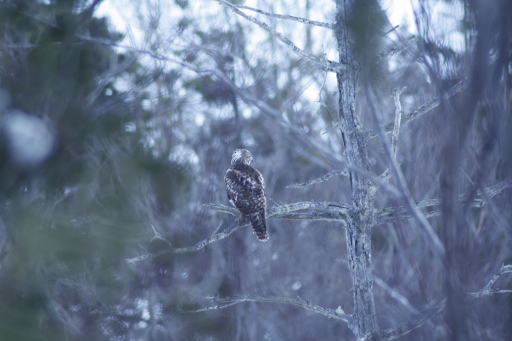 Today, she was in the branches on the far side of the greenbelt, barely visible through the trees. She surveyed her domain, waiting for any movement. After several minutes surveillance, she'd fly to another location and resume her watch. Any time the hawk took flight, the crows in the area all cawed excitedly, sending an alarm. 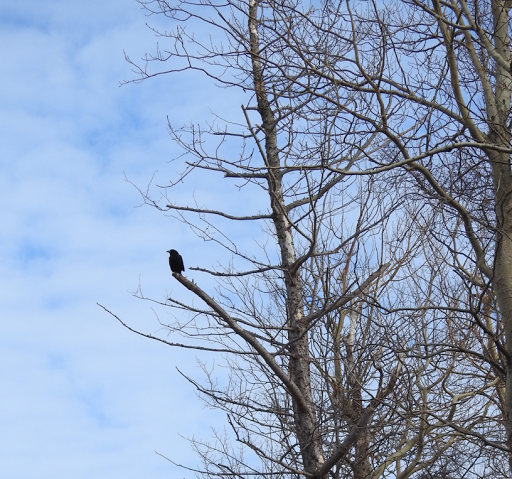 This happened several times as my husband and I watched the hawk move to various locations.
We continued on the boardwalk and on our return, the squirrels were back. 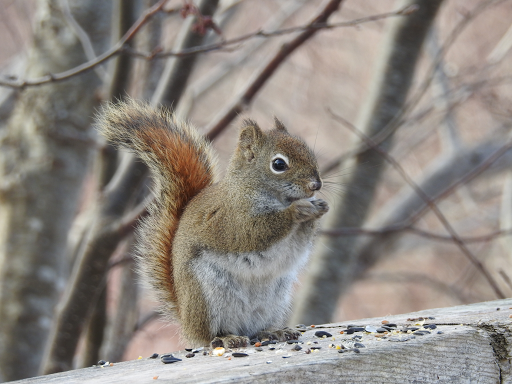 Obviously the hawk had succeeded. The crows were quiet and the blue jays were visible again. Everything was back to normal. The queen of the food chain had breakfast. 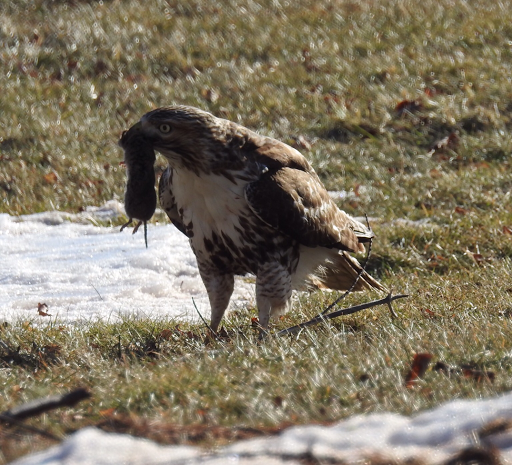 Your pictures tell the tale, don't they? I'd seen that last picture before, the Queen and her feast. :-)

I enjoy watching the great bird ballet. I especially like watching a sparrow chasing away a hawk, and a falcon dive from a lamp standard to snatch prey from the grassy median.

I thought that hawks rarely tried to capture squirrels as they are just as nasty and could eat a claw while being carried away. Our hawks just go for birds and small rodents, rather than our large and healthy squirrels.

Before I moved from my house there was a red tailed hawk who used to bring his meals to our back fence, a shrubby spot backed up by trees. You've captured a great nature story here.

that's a clever title you came up with - nice captures!!!

Considering how many nervous eyes are watching for them (and shrieking about their presence) it is a wonder they ever find food.
Wonderful post. Thank you.

I like how you called her the Queen of the Food Chain!

That picture worked well with this post too. She is the queen of that neighbourhood, Jan.

Birds are incredible creatures. I enjoy them too, Joanne.

Our red squirrels are not as big as some species of squirrels, Tabor. The squirrels here disappear when the hawks are around.

Thank you, Celia. It must have been fascinating to watch that hawk, Celia.

They really are, HW.

I agree, EC. The hawks are so fast and powerful I guess. It is amazing how the crows react to them.

She really is Debra.

Thank you, Mildred. You too.

Whau! I love all the photos you took. I like the little squirrels so I was glad the hawk got a mouse instead.

I love the squirrels too, Angela.

Second post I have read just now about hawks scaring the critters away.

It is amazing to see, AC.

Glad to see your animals have enough food even in the cold season. Squirrels, bird and hawk too!
Have a wonderful weekend.

The food chain is a natural wonder, Tomoko. Have a great weekend.

I love birds of prey...I have such respect for them. Pure beauty. I love that last capture.

Thank you, OE. I love them too!

Oh you can definitely tell when there is a hawk nearby.. the little squirrels are so cute Marie, I would hate to think of them becoming a hawk meal!

At least most of the animals were satisfied. A hawk can clear out an area real quick. I did watch a few squirrels try to get revenge on a hawk one time in a forest I used to travel though.

We were happy the squirrels were safe too, PDP.

Ratty, we know when the hawk is hunting now because of how the crows react and the squirrels disappear.

Nature seems cruel at times doesn't it, but yet, it is all part of the cycle of life. How amazing that you got to witness that cycle, and the reactions of the wildlife to the hawk! Amazing picture of the hawk and her breakfast!

That neighbourhood amazes us every time we visit, SUI.

I absolutely LOVE to watch the birds. I can tell from watching our sparrows, finches, and cardinals when a hawk is in the area. After one has watched birds for a while, you learn to know their every sound....happy AND warning.
The red-tailed hawk is an awesome bird of prey. They are majestic to watch, but I do keep an eye out as my birds feed (and bathe) in the back yard. I have been known to go out and "speak" to a hawk that thinks it is going to graze at my feeder. Nope. It will have to go back into the woods and find something else. Not my li'l birds.
Thank you for your visit to my blog, sweet friend.
You are so kind to visit and comment. I thank you for that.
Hugs from south Georgia.
Love,
Jackie

Birds are amazing creatures, aren't they, Jackie? Retirement has given us time to stop and observe them. We are fortunate to have the time to do it.

Hope you're having a great start to your week.