The squirrels who live along the boardwalk in Summerside, Prince Edward Island, are a delight to the residents who frequent the area. Residents, from children to seniors, enjoy watching and feeding the squirrels and the little red rodents take advantage of their generosity. 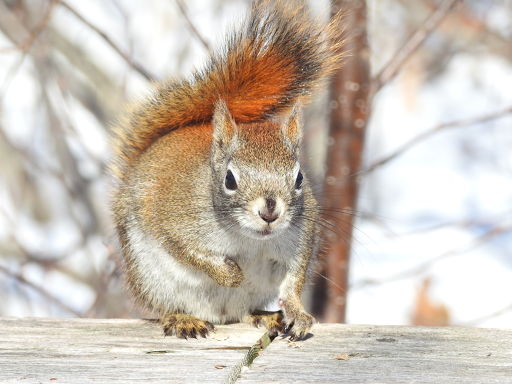 Squirrels who live near the river are tame and will take peanuts from one's hand. At least they did. This past week, those same squirrels were skittish. When they saw peanuts, they approached but would not come close enough to take them. This was strange behaviour for these usually brave creatures. 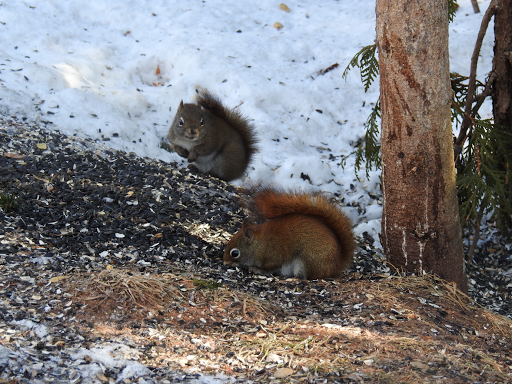 We left some peanuts for them and continued our walk. Near the turn around, where few squirrels lived before, there was a scurry, at least ten of them, running through the woods, some approaching walkers who offered them food. 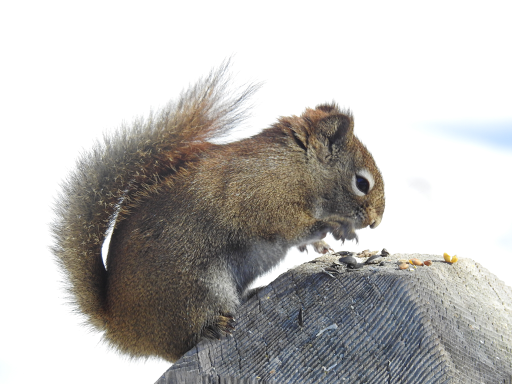 As usual, people stopped, talking about the animals, sharing stories of their antics. "These squirrels are more friendly than the ones we encountered earlier," I said.
A man nearby added, "That's because two young fellas shot two squirrels with BB guns back there. The lads were caught though," he said.
Could it be that the squirrels by the river had not forgotten the incident and did not trust people as a result?
Meanwhile, the squirrels at the end of the trail were tame enough to touch. Sat on one of the light posts, one young squirrel ate the peanuts left for him and allowed people to touch him, which we had never seen before. Let's hope nobody has to go to Emergency! 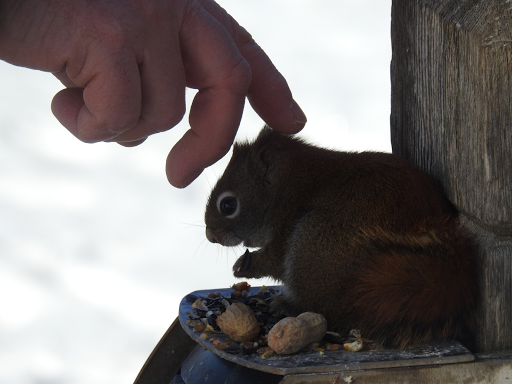 My husband put two peanuts on the ground, a double nut peanut and a single. One squirrel chased off his buddy and took the larger shell, leaving the single nut for the other. Size matters to squirrels!
The cute red rodents along the boardwalk are fascinating creatures who are appreciated by the adoring public. It will be interesting to see if two misguided young people will cause a permanent change to how one group of squirrels react to people. 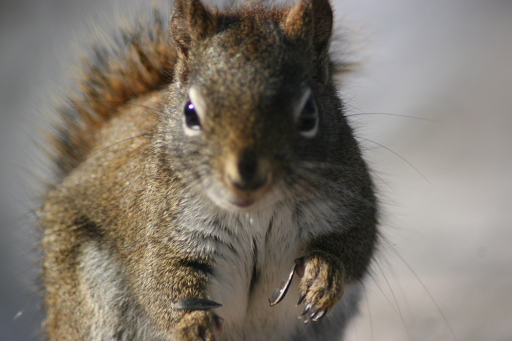 Very interesting story about how squirrels seem to remember such an incident. And what is up with that strange claw? I loved the pictures and learning about your tame squirrels. :-)

Nice that you have little red squirrels. Most of the furry tree-rats around here are huge black or grey ones, a lot larger than the red squirrels. But recently there has been a fox prowling around and there are definitely fewer squirrels than there used to be.
I bet Edward Scissorclaw belongs to a secret faction of the Squirrel mafia.

That effects of that incident could linger for a long time as parents teach their offspring to beware.

I can't get over what cute little faces your squirrels have! And I like the colors. Andrea

Sad that those 2 boys would take advantage of the tameness of the squirrels.

oooh they are so sweet. i like the red, we have gray squirrels!! so sad about those boys, i hope they are punished and never do that again.

I like to watch squirrels, but I'd never approach one. They can carry the plague, I have heard. (not sure if that's an old wive's tale. LOL)

'Dumb' animals aren't. Sadly they were right to be wary.
Beautiful creatures.

Oh this is such a great blogpost, I LOVE squirrels. Not generally, but in the area I was brought up, they were known locally as Skudgies, which I still refer to them as. Trouble is, some people haven't a clue what I'm on about, lol.

How could those thugs use BB's on them though, I guess every generation has them!!!! Glad they got caught and I hope dealt with appropriately.

Incredible claw, for sure, Debra.

Those little creatures give hours of pleasure to the residents here, Jan.

Lol. I think you are right about Edward, Shammi.

It will be interesting to see what happens, AC.

They are cute, tame and red, that's for sure, Andrea.

Red back and tails, Joanne.

I know, Mildred. I am glad they were caught!

Debbie, I hope they learn from this big mistake!

I'd get a tetanus shot after a bit, that's for sure, SW.

My thoughts exactly, EC. Nothing dumb about any of the animals we encounter along the boardwalk.

Skudgies is a great name, Ann. I've never heard them called skudgies before!

Oh, Marie, you are so much kinder about squirrels than I am. They are in such abundance around my house and make it almost impossible to keep the birds fed. I certainly don't approve of the BB shootings however.

Oh they are so sweet Marie but what long nails they have. Fabulous photos you got here. Makes me so mad when people do things like that. Every now and then we get some louts on Rottnest Island throwing stones at our Quokkas, can't understand it!

I wouldn't want to live near them, Ginnie. The squirrels are lovely where they are and I can visit them.

I don't understand such cruelty either, PDP. I hope the lads learn from the experience.

Beautiful pictures you have captured of the squirrels! I sure hope no one gets bit by one of them, quite some claws on that last squirrel!

I have concerns avout touching the squirrels too, SUI.