Two degrees Celcius and the sun is shining. The frozen bay is spread before us! My husband and I are dressed for the cold as we park by the boardwalk in North Rustico on the central north shore of Prince Edward Island. We haven't been back here since July and everything is covered in its frozen shroud. We are curious to compare the scenes of summer with winter in North Rustico.
The Acadian monument is partially buried in the snow now, waiting for its time to remind visitors of that proud heritage. The shrubs behind the monument are mere skeletons of their former selves. 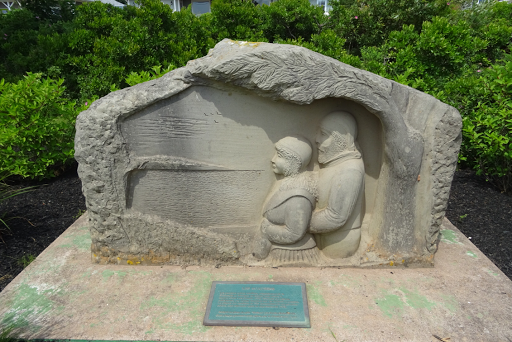 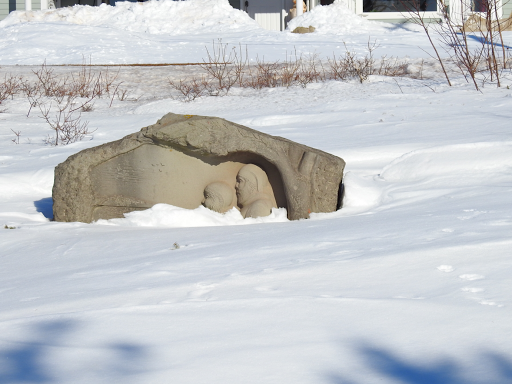 Only vestiges of some plants, such as Queen Anne's Lace, remain now, the stalks and seed pods having survived the worst nature can dispense. 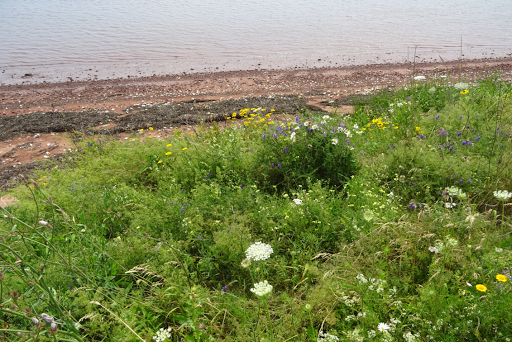 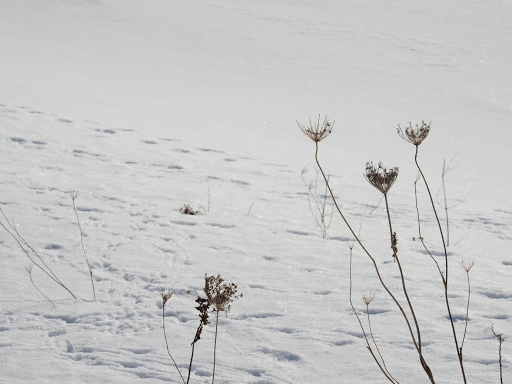 The entrance to the bay is the only open water in the March setting. 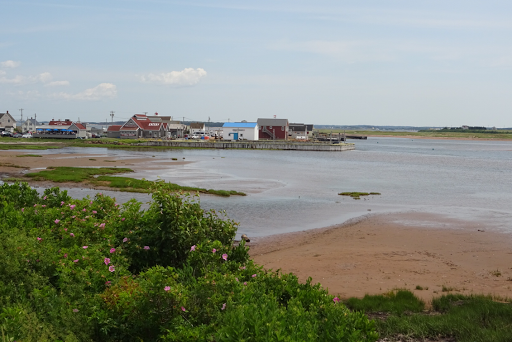 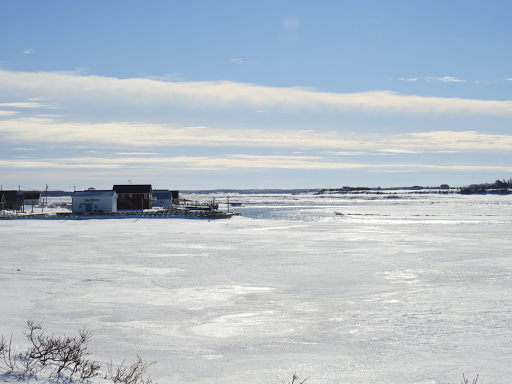 Winds have taken their toll on the patriotic display at Court's Wharf. 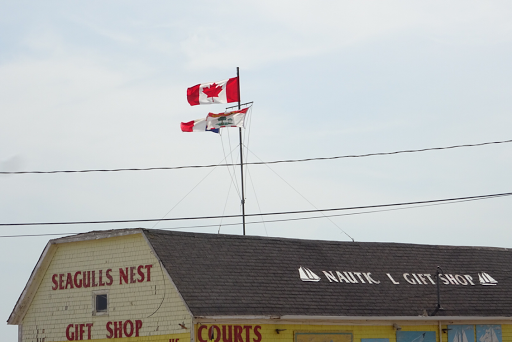 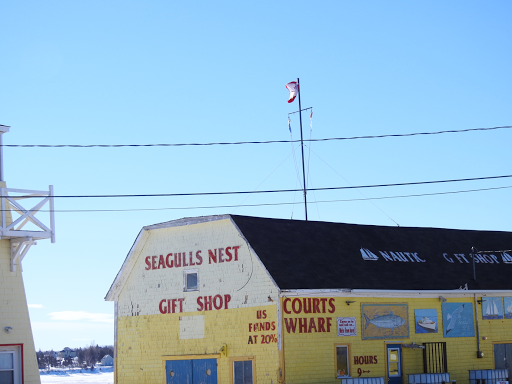 The pine trees have lost their brilliant green as a result of the decrease in daylight hours in the cold season. 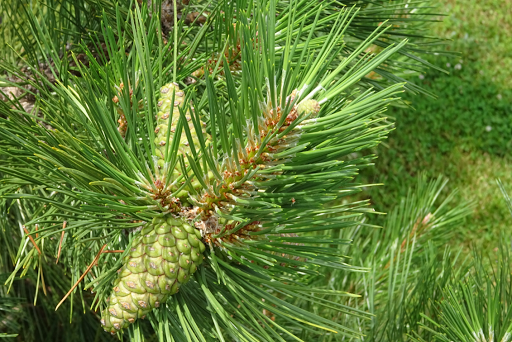 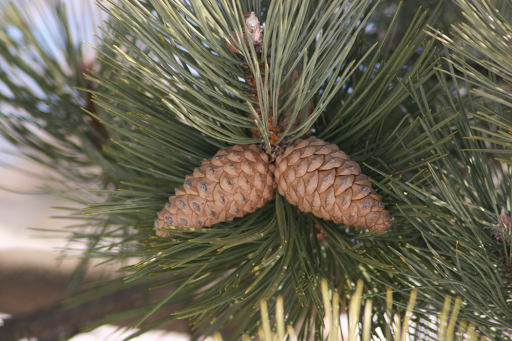 Ouside the bay, the breakwater is encased in ice and snow. 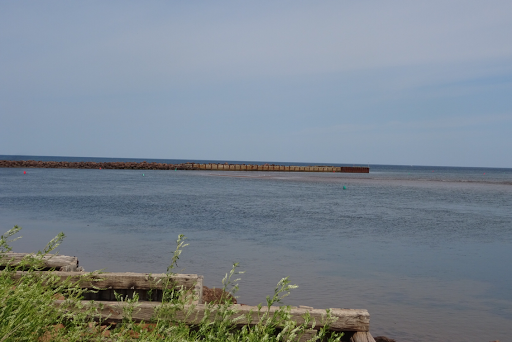 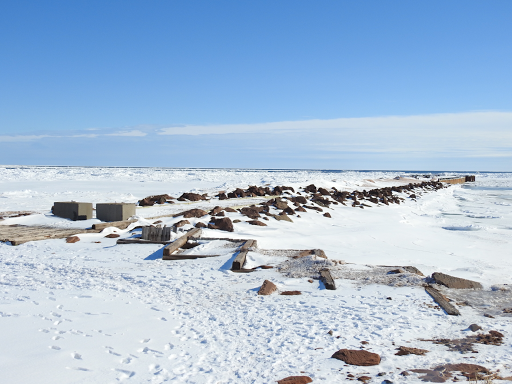 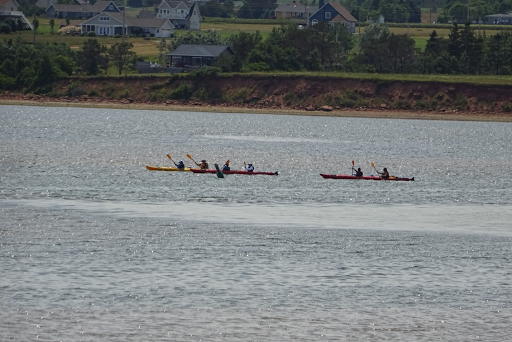 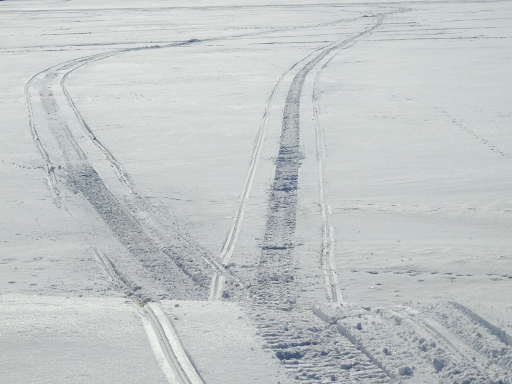 Yet, some things never change. The lighthouse stands vigil as it has for almost a century and a half, though it might be ready for spring. We are! 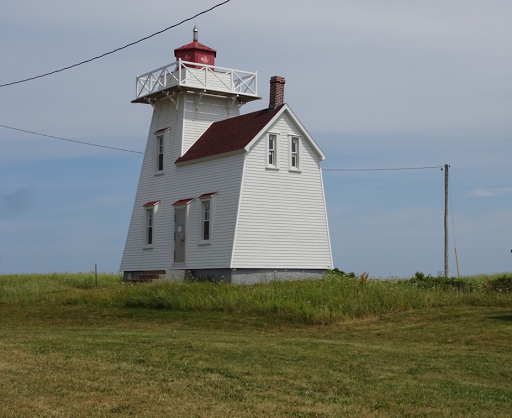 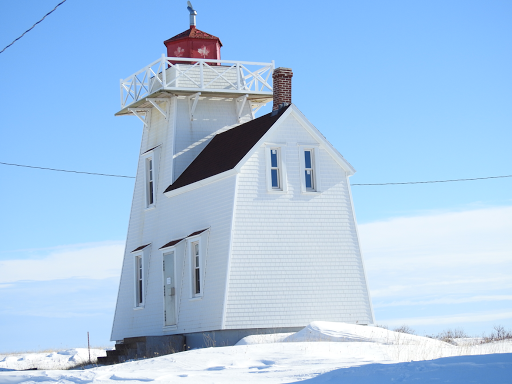 Nice to see the views in different seasons.... you have to plan ahead by 6 months!!!! You still have quite a bit of snow, ours is all gone now, but that doesn't mean we have seen the last snowflake. Plenty of time for more.

Wonderful comparison pictures. I think you're a great photographer, Marie. Thanks for sharing! :-0

What a great idea to contrast summer and winter photos of the same sites! Very interesting!

Oh what a wonderful way to end this excellent series of weather comparison shots Marie.. I love lighthouses with a passion ☺ and this beauty would look incroyable whatever the weather throws at it. Goodness it looks so well looked after.

Loved this photo journey through the seasons with you.
And Spring will come. She is reliable. Not always punctual, but reliable.

I enjoyed seeing the summer vs. winter contrasting pictures! Summer sure is amazing! Andrea

The. Snow has disappeared a bit since I look these photos earlier this month. We had some rain. Snow in the forecast for next week again and it is bitterly cold again. Winter is not finished with us yet, Shammi.

I like taking photos as much as the writing Jan. It is fun! I would never use a camera with a bunch of lenses though. My simple camera suits me fine. Thank you.

It is a well maintained lighthouse, PDP. I love them too.

She's slow to return here, EC. That's normal for us though. We get tired of the cold however.

This too shall pass. I keep saying that anyway, Andrea.

I enjoyed your pictures so very much. I love the lighthouse.
Happy Weekend.

Thank you for the lovely photos and I like the "before" and "now" to compare with all the snow. It sounds like a very Wintery place! We are almost in the same story in terms of Winter, I wonder when our Spring is going to get here. We had 10 degrees Fahrenheit today. I love to see light houses, this is beautiful! Thank you so much for the great photos and the informative reading.

What a splendid idea.

This is a really fun post of differences between warm and cold. I really liked seeing the comparisons a lot.

Such contrasting scenes. there's not much of a contrast between the seasons these days in the UK.

It is a bit sad to see the second photo but I enjoyed those different seasons.
Have a good weekend!

these are such fun comparison shots - what a great idea!! i love the pinecone images and the lighthouse, both are gorgeous in any season!!!

What a great set of photos! You are a super photographer. I've never seen a lighthouse like that one. You live in a place of wonders.

Thank you soooo much for these comparison photos. Beautifully done!
Winter will soon be over.....and spring will show its glory as well.
Sending you love and hugs,
Jackie

It looks so different and it is good to compare the two seasons. Sarah x

The seasons change everything, AC.

I am glad you liked it, Ratty.

I didn't realize the UK had such little seasonal change, John. I haven't been there in the winter.

There are a number of monuments along that trail which are snow covered this time of year, Tomoko. They will e exposed soon.

I couldn't believe the difference in the shades of green of the needles, Debbie.

Thank you, Celia. We think it is too.

Thank you, Jackie. More snow on the horizon for us I fear.

imagine what that lighthouse has seen in its lifetime, Angela.

Happy weekend to you too, Mildred. I am glad you enjoyed the photos.

Enjoy the snow, my friend. Winter is about to be history, and the snow will be gone for a while.
Thank you for your replies to comments. You are very kind.
Hugs,
Jackie

It will be a welcome relief, Jackie.

The snow is nothing this year compared to two years ago, SW.

i can see how amazing location is for visitors .
here summers are heading to their peak and spring has decorated the whole land so nicely

It is a lovely setting for tourists, Baili.