The old farm is in the rolling countryside of Prince Edward Island, away from the cities and the shoreline, deep in farm country. 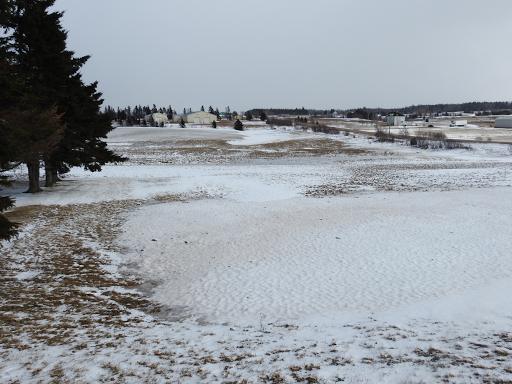 There, on this bitterly cold March afternoon, it feels cold enough to freeze time itself. And in a way, it is. My friend, Lucy, has purchased the old farm and is renovating the house for her future, with all the necessities on the ground level. During renovations, the house provides a glimpse of the past and stirs up some great memories.
The original house was built in the 1880s and just beneath the surface, it is a time capsule. Underneath the plaster covering the walls are the laths used in house construction in Canada until the 1950s. 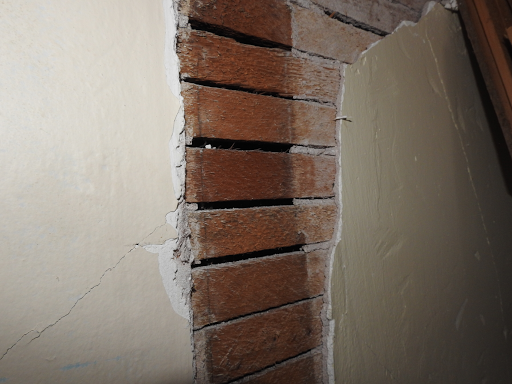 A closer look at the beams in the ceiling is interesting as well. Who knew that nails were square at one time? 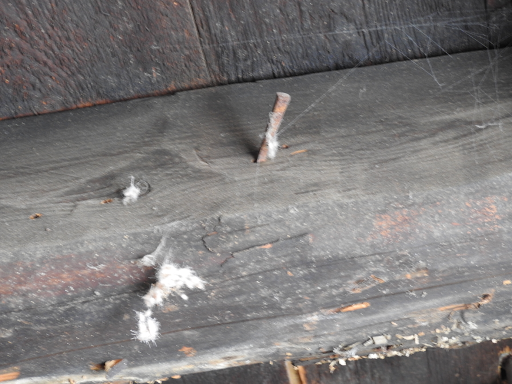 And who nailed them there so long ago? Their identities are in the genetic code and records of other families, pictures faded in old boxes, stories passed on through the generations.
The wood on the exterior of the house, under the siding, is varied in size and not finely milled as one would see today. Those old wood forests are gone from the island now, cut for construction of railway, homes, barns and buildings more than a century ago. The individual boards, some quite wide, stood the test of time. 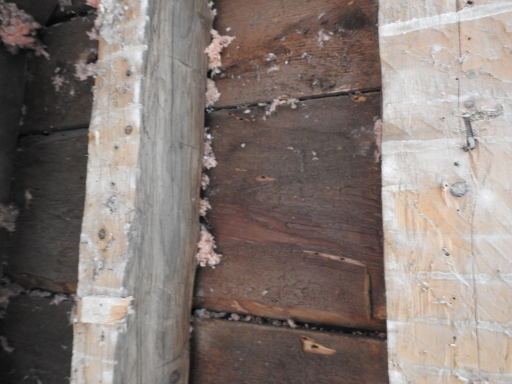 A wood stove heated the home against the wind which could bite through the walls. In more recent times, the owners had insulation blown into the walls, so the old house was warmer than it had been a century ago.
The stairs are narrow, leading to an upper floor with sloped ceilings. 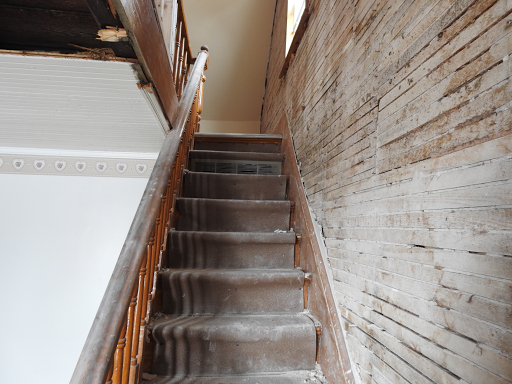 Walking up those stairs takes me back to my childhood in Newfoundland to my great grandmother's house. There, similar stairs led to an attic where I loved to play. It was magical to me with its sloped ceilings, giving it a cozy feel, the beds tucked under the roof line.
The old tub was like the one in my grandfather's house where I spent the first few years of my life. As a teenager, a bath in that tub felt luxurious! 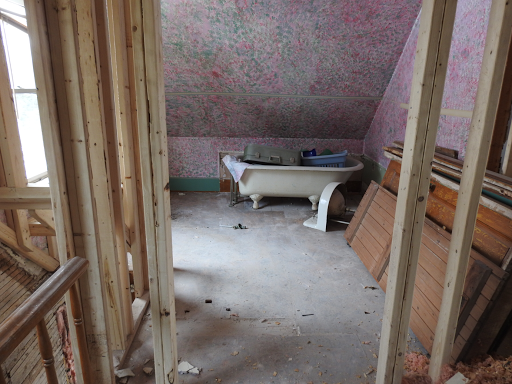 Up those stairs, time turned back sixty years with memories of places and people I loved!
Like many of the farm houses in Prince Edward Island, this home is a combination of two houses. As the family grew, the owner purchased another house, moved it to the site and attached it to his original home. The newer house is the kitchen of this home and an attic extension upstairs. It is a huge home, for a farming family who worked dawn to dusk, on the fields, caring for animals, working hard. If those wall could talk... 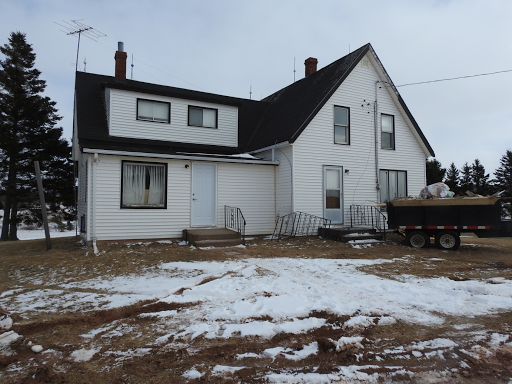 Outside, the old trees include pine and poplar which are dead, their skeletons making interesting designs again the sky. 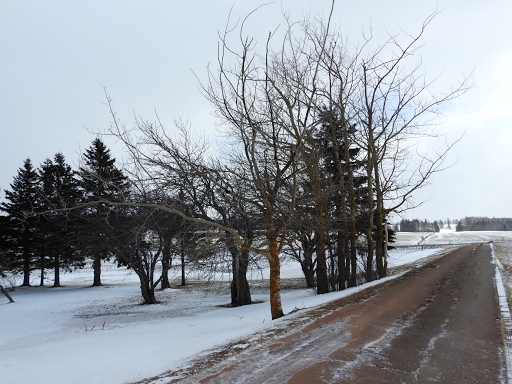 Nature has begun to reclaim them already and Lucy will do the rest. She plans to sit on her patio in the morning sun and look out over the countryside, which includes a little stream that runs through the valley. Knowing Lucy, she will have a spectacular garden like she does at her present home.
One old barn is fire wood now 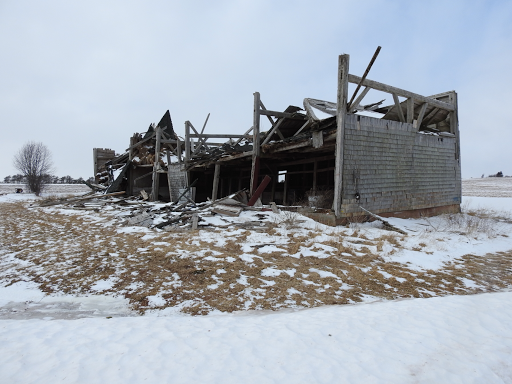 while another building may house some animals. 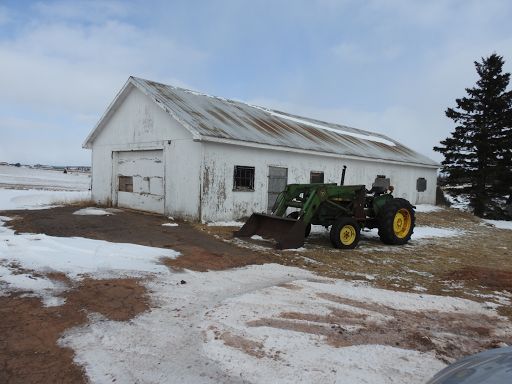 Lucy's son will use the old tractor which still operates. Some of the thirty-three acres will grow crops. Nearby, some of the neighbours look on. 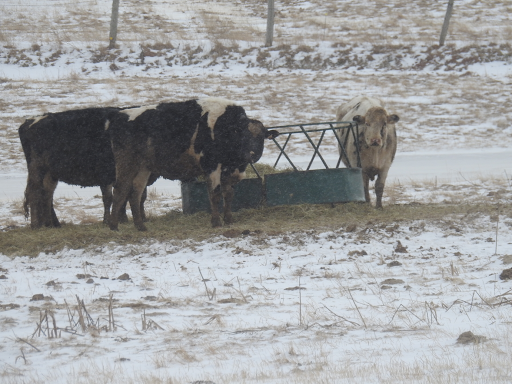 The old farm is moving into the twenty-first century but I wonder when the next renovation will be? Will those people in the future ponder its construction, builders, and owners like we did on this cold day? Only time will tell.
Posted by Marie Smith at 04:30

Such interesting collection of photos! The old house is silent but telling its histories.
It is impressive to see "the old barn is fire wood now".
Stay warm!

What an interesting place. The construction is different, perhaps, but the home will be used as all homes are. I like the look of the old homestead. I hope you'll share a post once it's finished and ready for her to live in. I am so enjoying learning about your neighborhood, Marie. :-)

When I was a kid, my grandparents ran an old country hotel in a small prairie town. The hotel was from the Victorian era like your friend's house. The back stairs from the kitchen to the second floor rooms -- the "servants stairs" -- were small, wooden and narrow like the ones in your photo, unlike the stairs that led from the guests lounge to the second floor rooms -- the "guests stairs" -- which were wide and carpeted.

I think they will Marie, every generation is fascinated by times past. I'm totally hooked on old house renovations, hopefully we will get to see Lucy's old farmhouse as it develops.

How amazing to renovate a home with such unique memories embedded in its walls! A workhorse of a home for sure... as any old farmhouse would be. I can't imagine how cold it must have been in there during those cold Island winters! They were a hardier bunch years ago than us now with our comfy temperatures. The house will be a dream,I'm sure when your friend gets done with it! Love the possibilities :) And yes, I remember those bitter cold March winds! Brr!

farming - the heart of america. what a task to renovate this place, your images are beautiful and will be great "before's"!! i hope she saved that beautiful tub!!!

I love historic homes! I wish today's homes would be built the same way. So neat you can reminisce of your childhood. I know that brings a joy! I would like to think that farmhouse could have been Anne of Green Gables'-type of experience. Andrea

Oh the stories those walls could tell...
How I love that the home is being restored. Thank you. And Lucy. A big job. A worthwhile job.

Memories....
The photos of the interior of the old home bring back a few of them for me.
Construction is much different today....but I do love the time and love that builders in "the old days" put in their work.
Thank you for sharing these...

Yes, the old house is indeed telling its stories, Tomoko.

The old farm is about twenty-five minutes from where I live, Jan. I will report on it again!

Debra, we had friends who owned an old "company" management house in a mill town. The maid's quarters on the attic on the thrid level had those same stairs. Hardly wide enough for one person!

I will keep you posted, PDP.

March is always so cold with the wind and all the ice around this island, as you know,SUI.

The old house will be lovely when Lucy is finished with it I am sure.

It's like a time capsule covered over in newer materials isn't it? Interesting that two houses would be joined to allow for a larger family. I've never seen that done in Ontario, additions - and several added on though.
I hope you'll revisit your friend Lucy when the house is completely renovated to share more photos.

I'm not sure about the tub, Debbie. Farm houses are an important part of this part of Canada for sure.

I welcome any memories of my grandparents. They were a big part of making me who I am today.

I plan to visit Green Gables in the next few months. I haven't any digital photos of the place.

It is a lot of work but it will be worth it for sure, EC. I will post other photos as the project progresses.

They are so narrow, aren't they, Mage?

I enjoyed seeing the old construction materials, Jackie. The memories were a wonderful bonus!

I will post more as the project progresses, Judith. Some of the farm houses here have three joined homes.

Me too! I was close to my one grandma especially. I'd like to add, the Amish (and you can see this in Lancaster, PA) add onto their homes. At least that was what I was told when I took a tour of an Amish farm. When the parents grew old and couldn't do the farming, and the farming was handed over to the son/daughter and their family, the parents went to live in the added -on portion of the house. Andrea

Those square nails probably were hand forged. I grew up in a lathe and plaster house like that, with a claw foot tub under the eaves. My dad built my dresser in under the eaves; the drawers extending into that "dead" space back there.

Generations of families lived on the farms here too. Some of these old farm houses are gigantic!

It was a good use of that space, Joanne. I bet you're right about those old nails too.

What a lovely bit of discovery as you uncover one thing after another.

How wonderful for your friend. I enjoyed all the photos and reading your sweet memories too. I remember the attic at my great aunt's house and how much fun I had playing there. Have a cozy day.

It is an interesting reveal in an old farmhouse, AC,

Many of us have great memories of such home, Celia. We were fortunate, for sure.

Quite the project to take on! Good luck to her!

History past and present, still in the making! If these walls could talk, indeed. I love how you have shared this story, Marie, of PLACE. Place and HOME!

Lucy is such a capable person! She is up to the challenge.

Thank you, Ginnie. The farm is a walk through herstory for sure.

That is fascinating to see. Sarah x

The verticals in the closeup of the structure are hand hewn. They are roughly squared and you can see the adze marks in them. The carpenters would cut the grain of the wood crosswise here and there to keep the adze from digging too deep as they shaped the timber. Also, nails were square because the blacksmith made them in the forge. In spare time, he would make thousands of nails a day from bits and pieces of iron; then, sell them to any and all that needed them. The timber-framed barns of the day were held together with big wooden pegs. Some of the hand hewn timber barns and cabins had boards 25" wide and 30' long in them made from mighty big, straight trees. On the US east coast the favored woods were Chestnut (which became extinct, early, due to a blight), then White Oak and Poplar. She's got a really old gem of a house there. I wonder what the outside is like under all that siding? Thank you so much for the walks, even though I'm chilled to the bone at the end of my read! Kathie in Odessa, WA, where spring has, finally, sprung....if the creek doesn't carry us away.....

Thank you for all of the information, PS. I have passed the info on to Lucy.

you friend seems really a wonderful and very strong lady to buy an old house and renovate it to make her dream farm house.
this area sounds really cold and snowy.
you captured so well ,square nails? how strange.
in our country we do not insert cooling or heating systems in walls so heaters and air conditioners are visible appliances.
i can imagine your wave of memories that arouse when you look at those stairs .
wishing your friend all the best for her ventures dear!

My friend is an incredibly capable woman, you are right, Baili.