We stood in silence and watched the flames. The heat, which had been intense, was not so much now as the old barn was consumed by the fiery beast. It belched a huge cloud of smoke which was carried away from us by the wind. The sounds of the burning timbers drowned out the noise of the pumps, vehicles and fire fighters.

The old barn was on my friend, Lucy’s property. 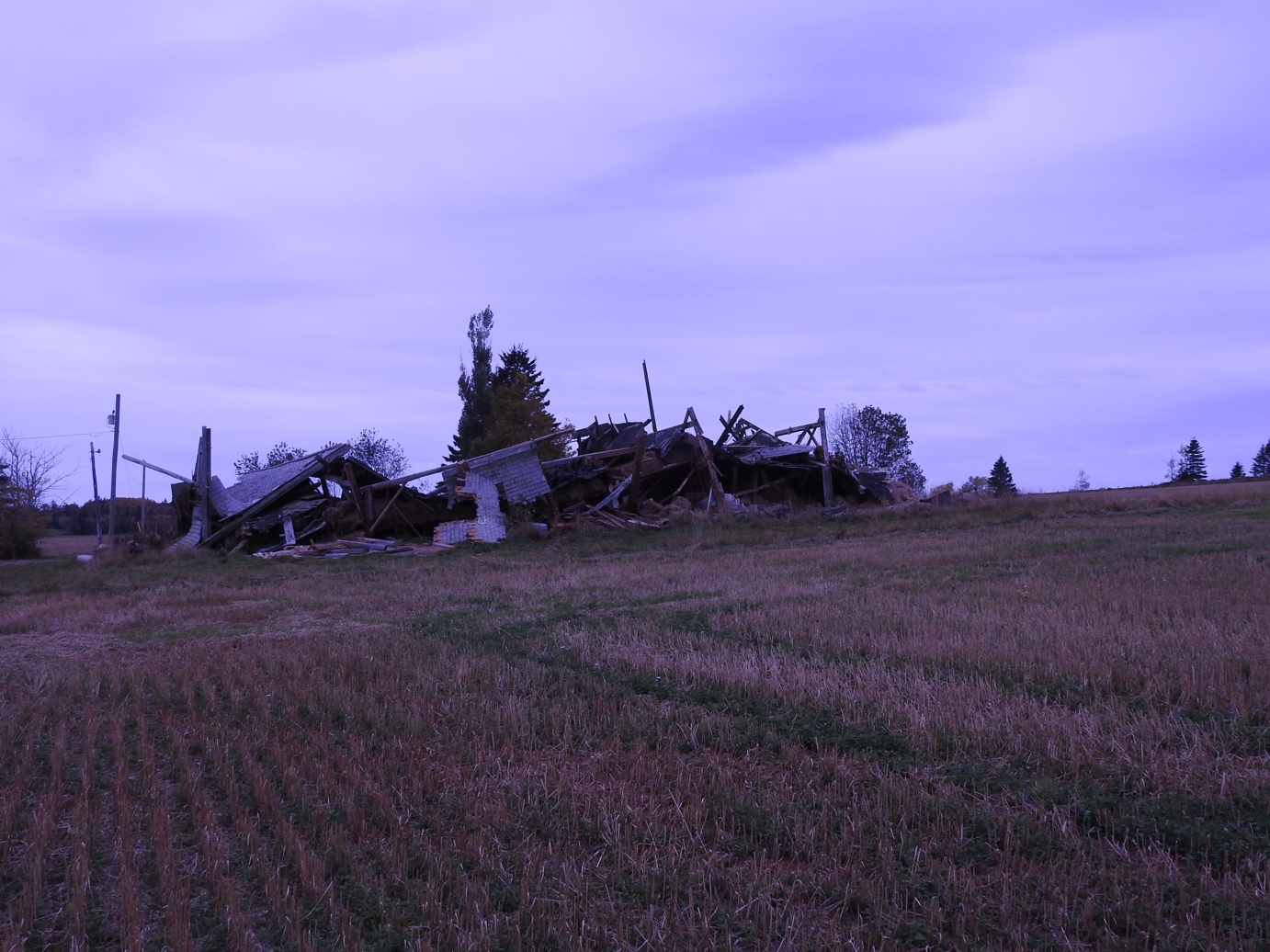 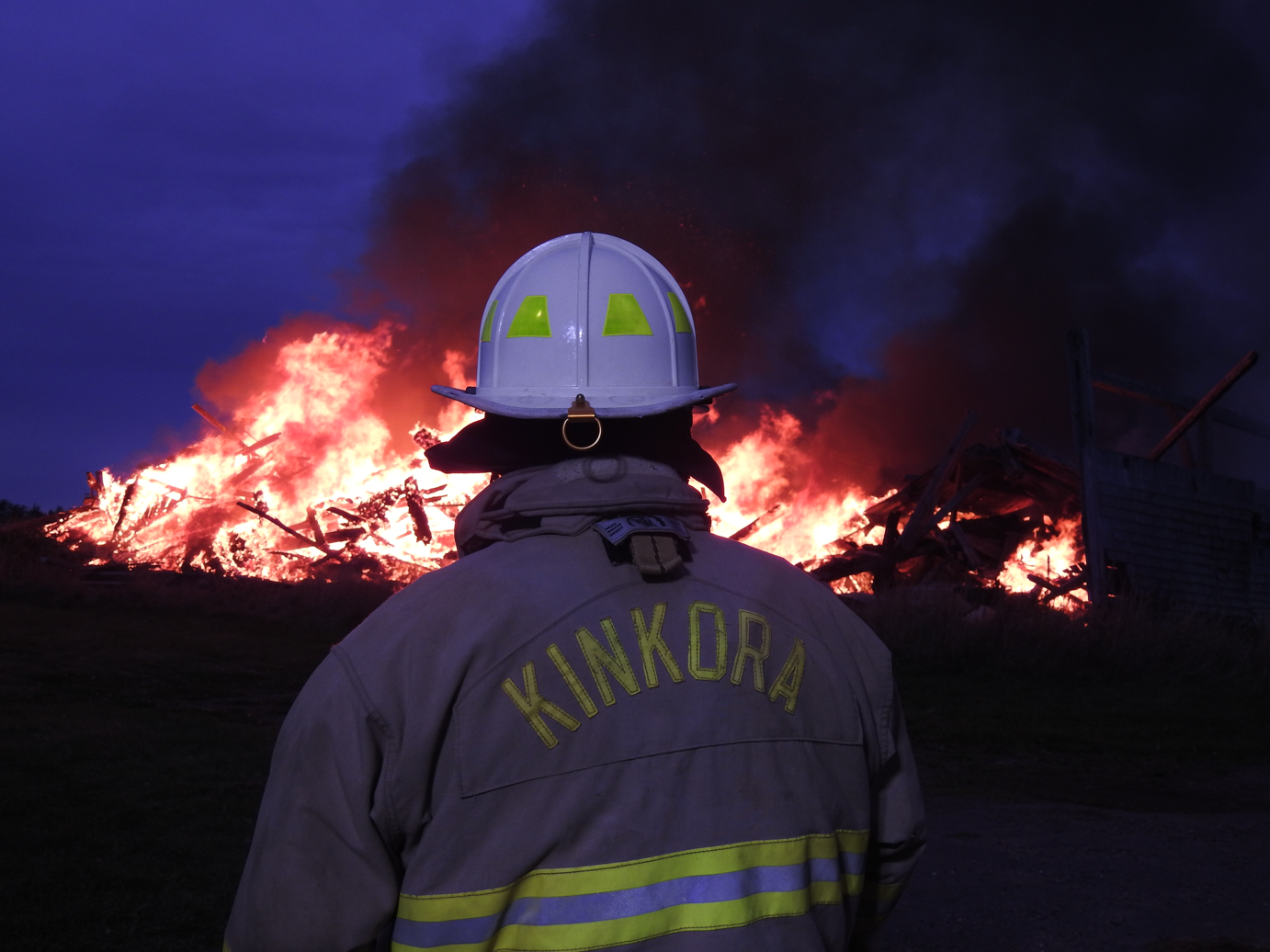 a and a quick way to dispose of the dilapidated structure. Lucy had purchased the property from her friend, Gerard, who was there to watch the proceedings.

Lucy, Gerard and I watched as the ten fire fighters arrived with trucks including a tanker, two pumper trucks, and a rescue vehicle and set up their equipment. Rural Prince Edward Island has artesian wells which don’t have enough water pressure to supply the hoses. Because pumper trucks have a limited amount of water on them when they arrive at a fire, water must be tanked to a fire site where the pumper trucks provide the pressure to force the water through the hoses.

We watched as the water was emptied from the tanker into two reservoirs and it took only a few minutes to fill one of them and part of the other. 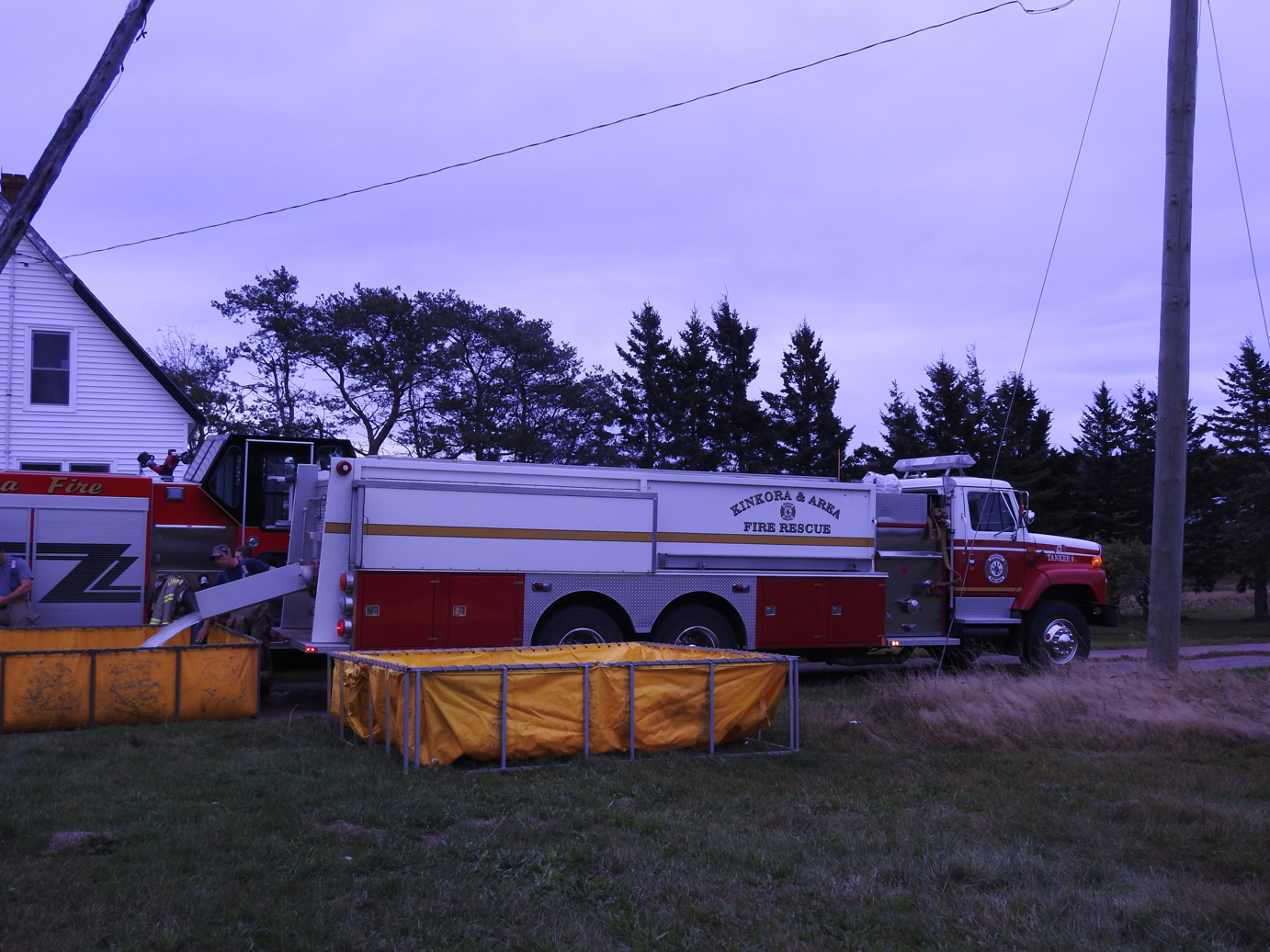 Then the tanker left to refill. The fire fighters worked efficiently to set up the equipment necessary to spray the grass around the old structure. The chief kept a sharp eye on the situation and directed his crew where he saw a need.

Sparks rose high into the air though they posed no threat to the house or the out building. The fire fighters checked the buildings periodically to see if they were hot, then sprayed them down with water via the pumper trucks. They were concerned especially about the windows of the house which, if too hot, would break when the cold water hit the glass. As the last of the tallest timbers disappeared, Gerard said, “I wonder what father would think of this.” 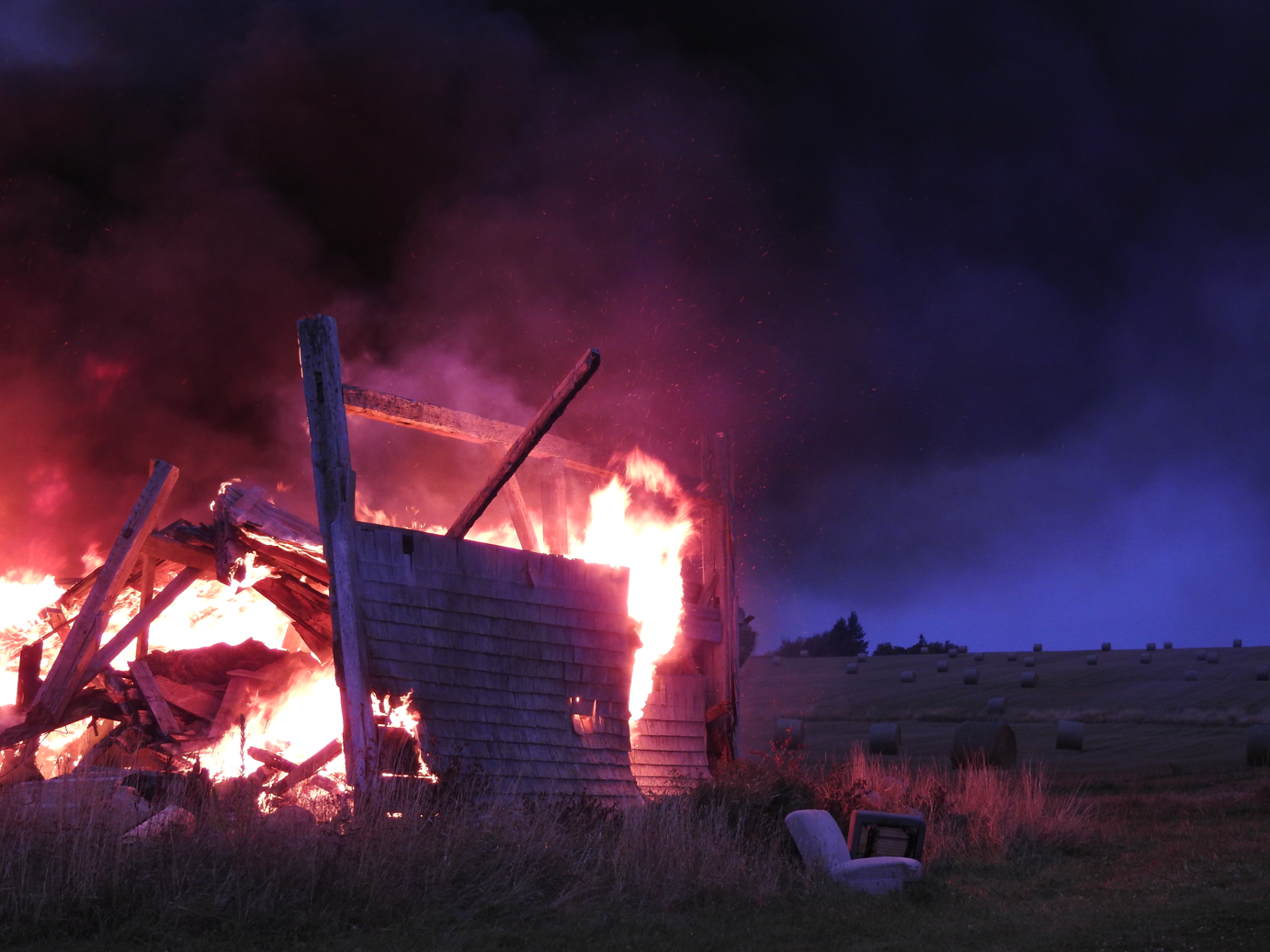 “I wondered how you felt about it,” I said. Then added, “How old was the barn?”

Gerard, from the seat of his walker, spoke of the one hundred and fifty year old building which his father had bought from the Duffy family. His earliest memories of the barn go back to age four. By the time he was six, he was driving a tractor.

He remembered both his mother and father around the barn where they kept cows and the horses used to plow the fields. They both worked hard, as did the children as they grew.

Gerard remembered how his father reconfigured the barn over time and you could see, as the flames reflected in his fading eyes, the memories were easily accessible in his mind’s eye. He didn’t want to miss this occasion, the end of Duffy’s barn.

Later, Lucy asked Gerard if he wanted to go back to the Home and he said, “Yes.”

You can't burn the memories from a mind and the feelings from a heart.

Powerful post Marie. I can only imagine what must have been coming to mind for Gerard. I still go by to see my grandparents' places when I am in town. Such good memories.

Glad that it was used in some way. Wish they could have recycled the wood, though. Old barn wood can fetch good prices down here.

I had a discussion with a friend the other day. First responders are the bravest, most highly trained people I know, fire and police. The bravest.

A poignant and beautiful post.
LOVE your final sentence.
And agree with Debra. It is sad. Positive, but sad.

Seems so very sad but I guess it was beyond repair. That is something I love about France so many buildings are many hundreds of years old and are so well restored. Have a great weekend Diane

It must have been an emotional event for Gerard. All the memories, still fresh in his mind. It must be tough for the firefighters to battle a fire there especially if they have to truck in water. Wonderful post Marie.

It must have been a hard thing to do for Gerard. I know I like to hold on to old memorable things, probably too long.

Always sad to see an old building go but some are too unsafe to save. I'm glad Gerard could be there and that he shared some of his memories with you.

A pretty interesting sequence with a bit of wistfulness added into the mix.

How bittersweet to write about the old barn and the old man with such love. And that would have been very hard to watch, for me at least, as I saw history going up in flames. Very well written, and it pulled me right in. Thank you.

wow, that would be a tough pill to swallow....

Gerard had great memories too, Celia.

I felt the same, Debra.

There was nothing to salvage there, Tabor.

That s a great thing about France for sure, Diane.

Thanks, Bill. In a real fire situation, neighbouring fire departments bring their equipment too so that helps for sure.

I can understand why Gerard would want to see the end of the old barn, Ratty.

I was glad to hear the memories, Mildred.

Thanks, Jan. It was hard to watch! It showed me how time marches on consuming our present as it does.

The barn was rubble, SW. The memories remain.

all my feeling...stirring around, what an interesting post. i'm not sure i could watch this, or tell this story with so much detail and dignity. today, this made me think of the poor souls in california and how necessary fire training is!!

It's frightening how quickly fire can take hold, the pictures from California have been awful this week. It must have be sad to say goodbye to Duffy's Barn. Sarah x

Sad, for sure. It's good that Gerard was able to go watch since he wished to do so. By this age, he likely has had to accept quite a few changes, and understands what you wrote in your final sentence. But still sad.

Glad it was a controlled burn!

Not a pleasant thing to see...

It was, Sarah. Seeing the work of this volunteer fire department was encouraging to me as my daughter and her family live in a rural area.

You certainly can't Marie but if the experience and training here helps the young firemen deal with real fire situations in the future at least something good came out of it.

I recently had to burn my father's old garden shed and, while it was on a much smaller scale than burning a whole barn, made me feel much as Gerard must have felt. I enjoyed watching the flames but then suddenly it was all over, just smoke and ashes.

It did indeed, PDP.

It must have been kind of a sad thing for you to see, in a way, considering the age of the barn and what it represented. That is what I meant.

It was sad and reinforced how important memories are, Catarina.