The rocks and hills of Nova Scotia are a welcome sight to this transplanted Newfoundlander living in Prince Edward Island. While I love our little island home, it is flat and made of red soil and sandstone, so unlike Newfoundland. 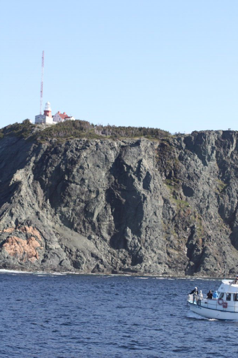 I didn’t realize I missed the granite cliffs of home until our recent visit to Nova Scotia.

While there, with our friends, Carlo and Hiltrud, my husband and I followed the Sunrise Trail from Antigonish north along St. George’s Bay to Cape George. It was over a winding road through the forested countryside, rocky outcrops of granite and hills dressed in their autumn splendor. Beaches were rocky like many in Newfoundland, instead of sandy like PEI. 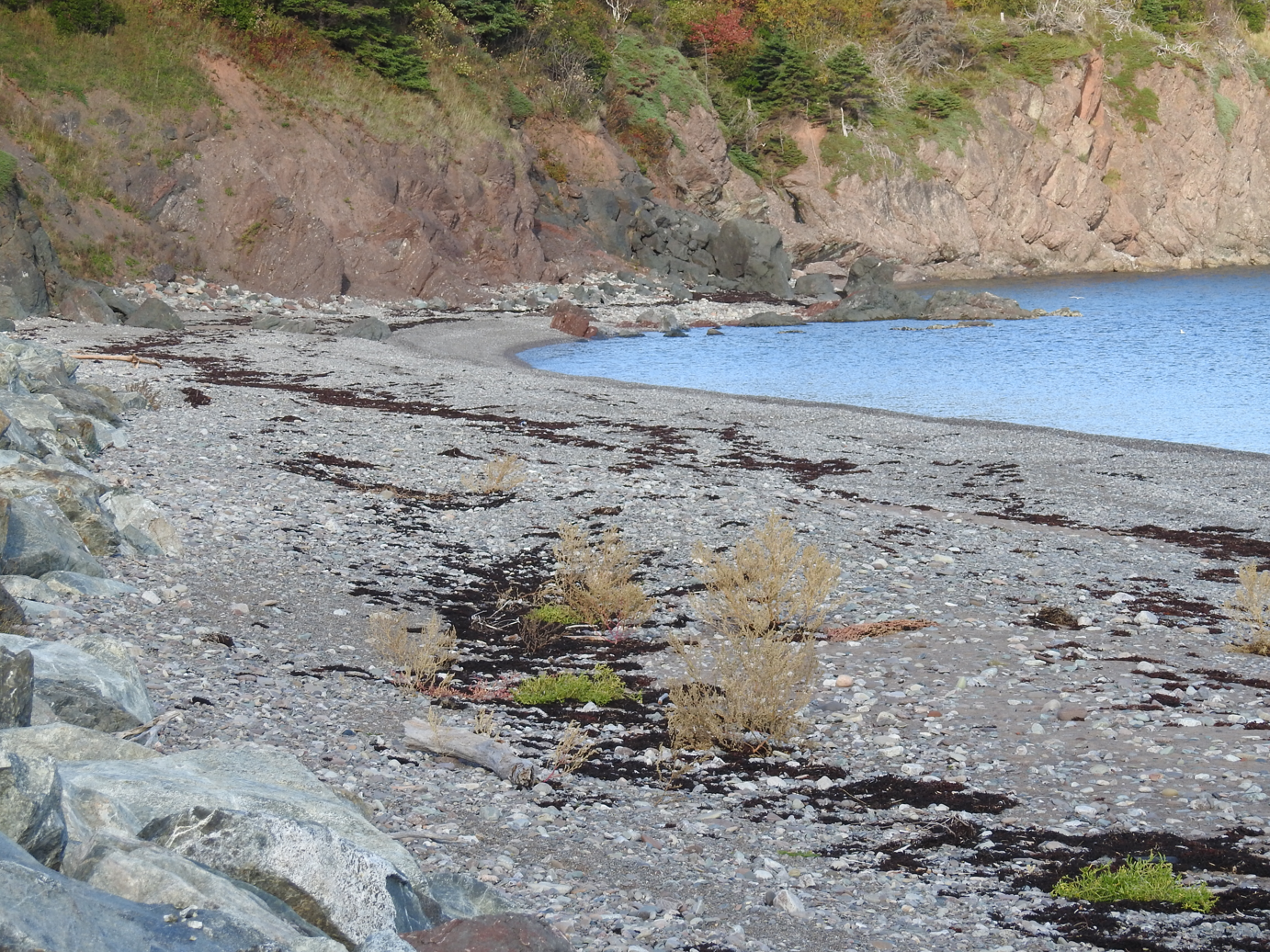 Such a strange world to us now, but familiar to our bones.

The area isn’t all farmland, like Prince Edward Island. Fishing is an important industry in this area as well. In Lakevale, dredging was underway in the channel from the lake to the bay. 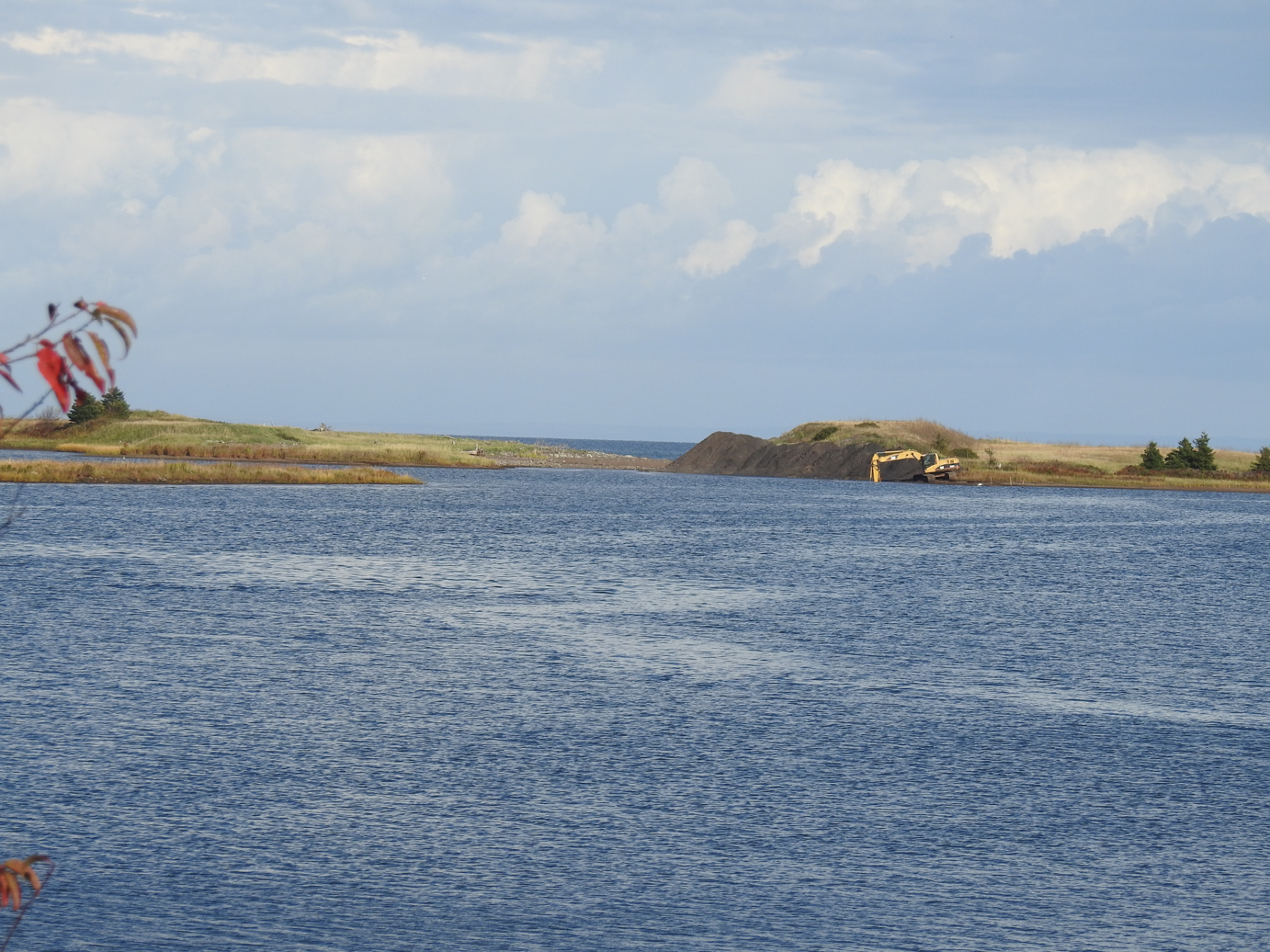 while ducks swam nearby. Further along the shoreline, Ballantyne’s Cove was a boat basin for pleasure craft and fishing boats. We walked the wharf and observed the area from a nearby hill. 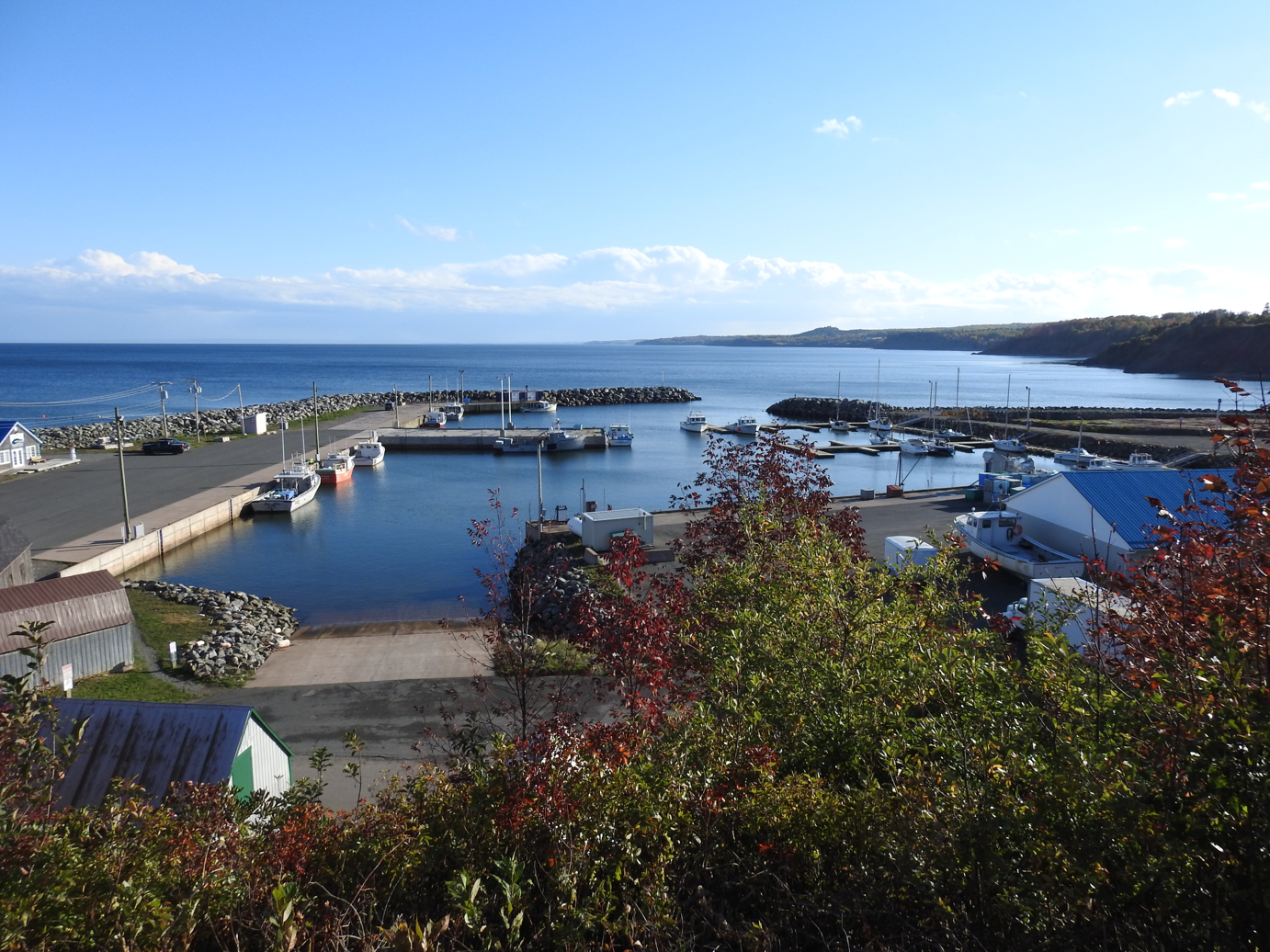 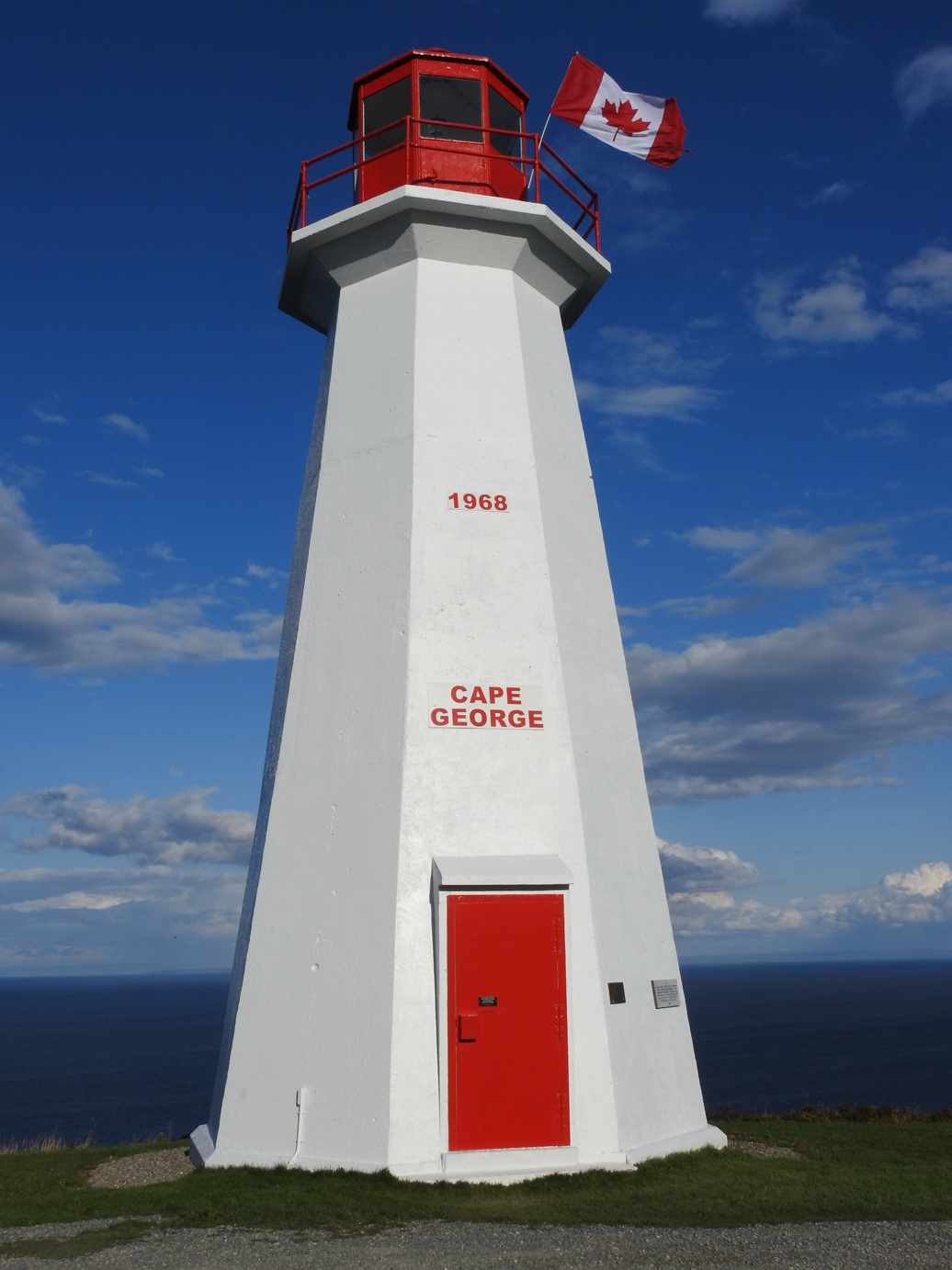 and the clear, sunny day enabled us to see Cape Breton across the bay. 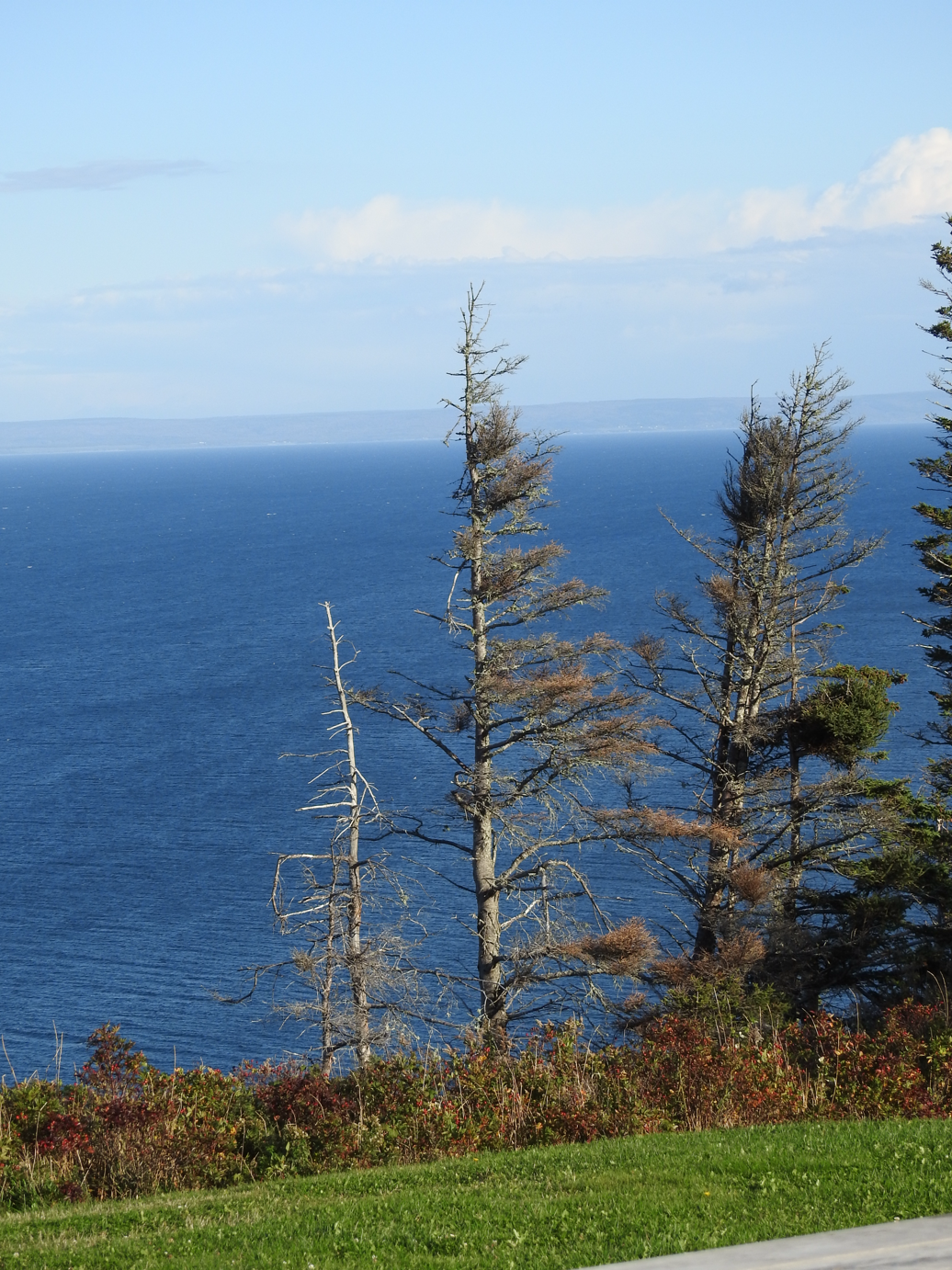 It is the island part of Nova Scotia attached to the mainland of the province by the Canso Causeway.

Nova Scotia feels and looks like Newfoundland more than Prince Edward Island does. Even though we have come to love our red island home, a visit to the land of our birth is overdue. Nova Scotia was a good teaser.

It is definitely a lovely place. The gorgeous sunshine and the lighthouse caught my eye. Thanks for taking me along to Nova Scotia, my first time. :-)

Oh yes, I remember driving the Canso Causeway, then on to catch the ferry to Newfoundland. We were in a hurry so didn't really have time to explore.

When we used to live in Mafikeng I hated it as it was sooooooo flat. The wind and dust just used to blow with no hills to break it. We used to cycle a lot and it was so boring, flat, flat, flat!! I love hills and I love your photos. Diane

Coming "home" is so important. The rest of the world is lovely or interesting, but the rolling hills the glaciers left in NE Ohio are home.

While I was married I lived in the country in Louisiana. I absolutely loved nature and living in the country but when we would go to Houston to visit, I realized I missed all the concrete and tall buildings. Guess I got to have the best of both worlds - Country life and City life.

Lovely. And isn't it fascinating to learn just what home is to us. For me it is a magpie's call rather than landscape...

What a beautiful world you live in. Thanks for sharing it with us.

Beautiful images Marie. I always wanted to visit Newfoundland, it looks rugged and gorgeous. Thanks for the tour.

Our Canada is so beautiful... rich sceneries, amazing people.

The connection between Nfld and NS makes some sense that I had never thought about before.

N.S. Is a great place to explore, Shammi.

I love it in PEI, Diane. Nova Scotia is more like the geography of home however.

It's all about where we were raised, Joanne!

You sure did, Barbara!

I don't recall hearing magpies, EC, though I probably heard then when we visited Australia. I did a search to hear their sound. Such interesting sounding creatures. I can understand loving their voices.

It is beautiful in eastern Camada, Mage.

Newfoundland is similar to parts of Nova Scotia but much more rugged, Bill.

Canada is a beautiful country, Catarina, with such variety of landscape and people! It's partly why I love it so.

I have never been but I know that I would love it there. So flippin' pretty.

A Beautiful lighthouse, it looks so tiny off in the distance.

I enjoyed this post with your tour around Nova Scotia. I had never been to Newfoundland but I can imagine it would be a lot similar to Nova Scotia with its steep Cliffs and somewhat rugged landscape. The lighthouse picture is amazing with the blue skies in the background, wow what a lovely capture!

It is indeed, HW.

The Twillingate Lighthouse is hugh, Debbie.

You should be writing our tourist brochures for us, Marie! An outstanding series of posts on NS - well done.

PEI is kind of unique among the Atlantic provinces.

N.S. Is so beautiful, Jenny. It is easy to show it well.

PEI is different. One of these things is not like the others, FG.