When one looks at the community now, it is hard to imagine the time when ship and boatbuilding were in their heyday here. Mahone Bay, Nova Scotia, is a small town which has some modern homes around the water and an area of older homes nearby. 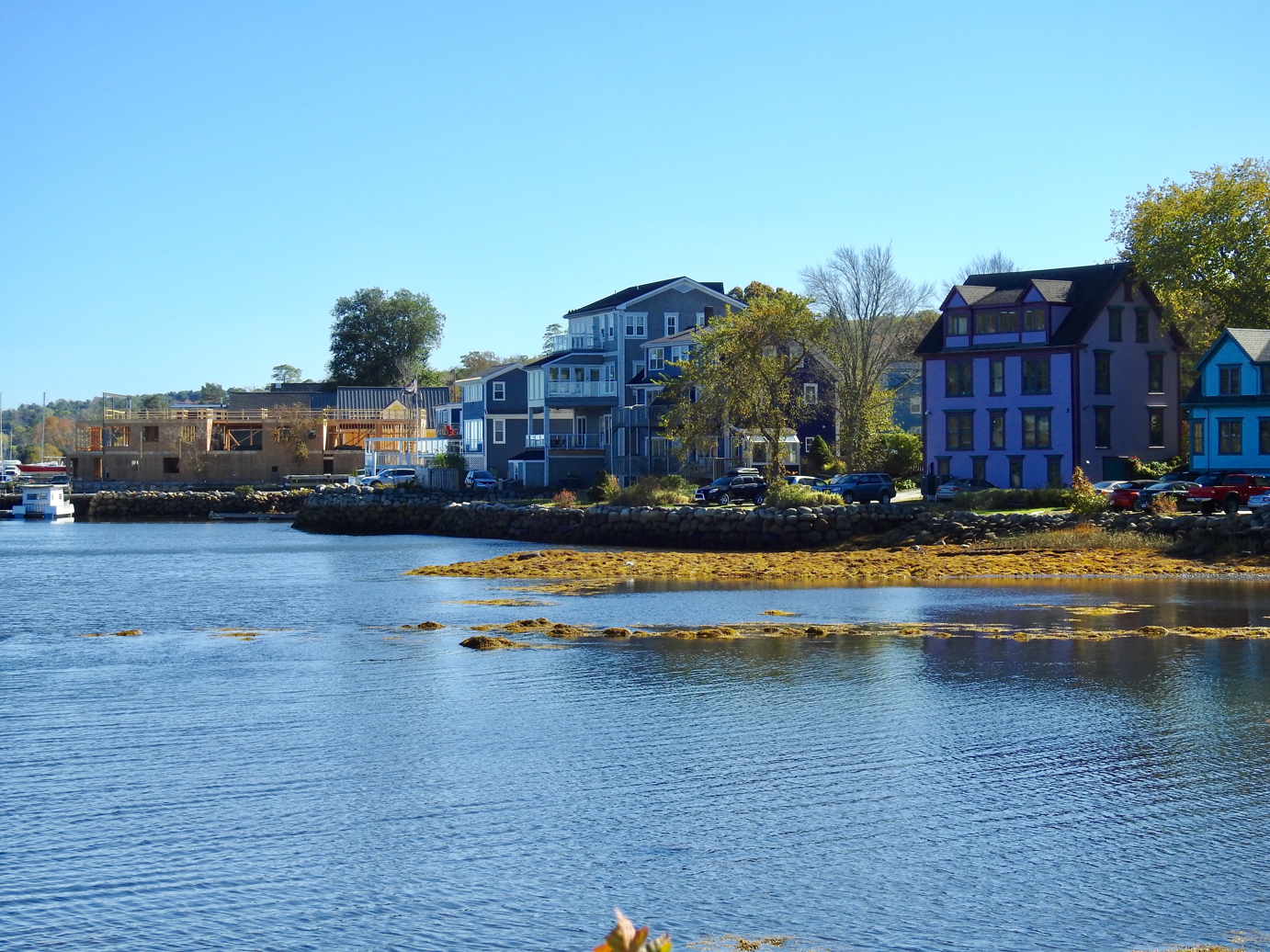 There are pleasure craft anchored in the bay while a marina further out the bay looks busy. 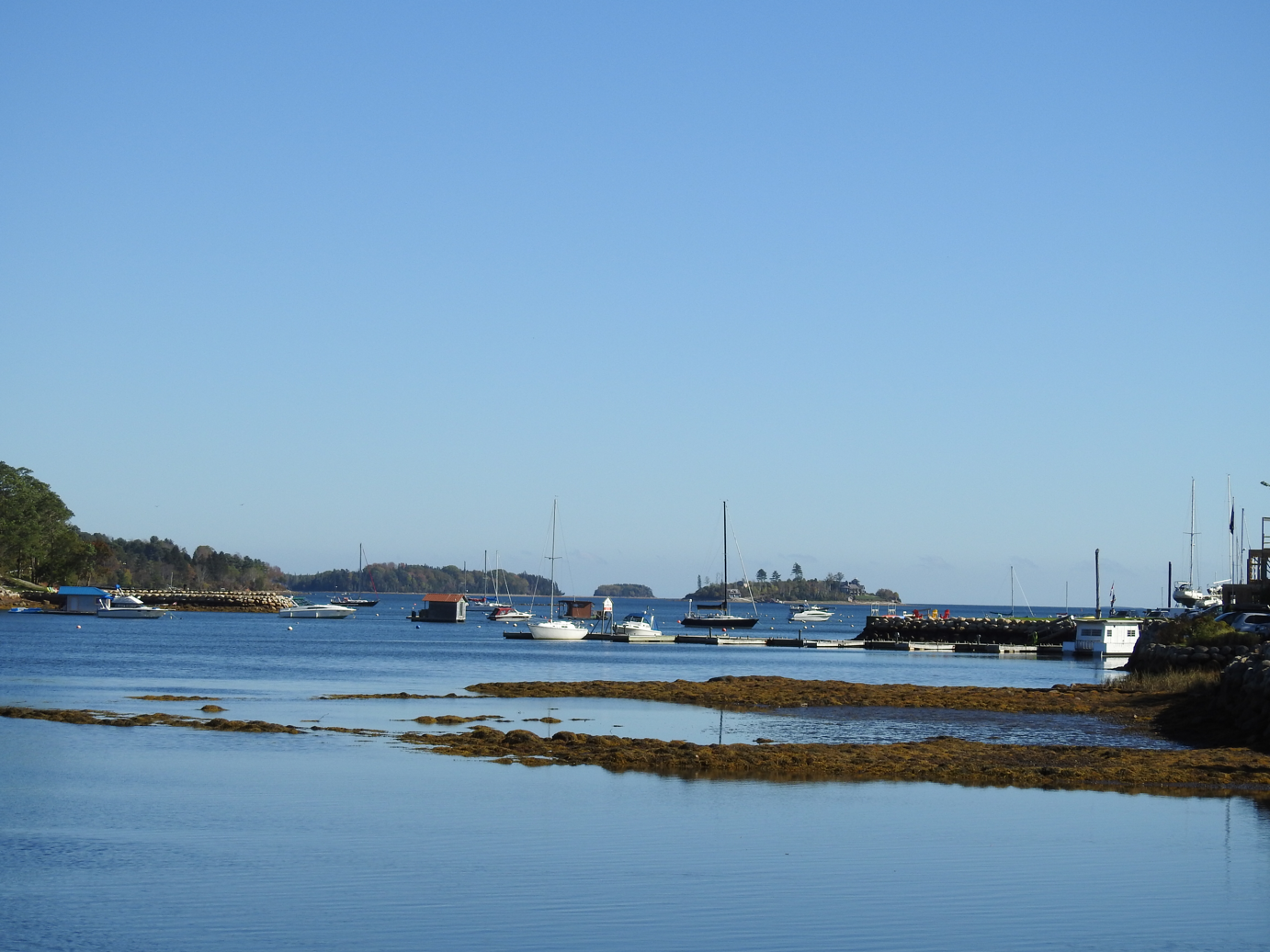 During our recent visit to Nova Scotia, we stopped twice in Mahone Bay on our way to and from Lunenburg. The community of 1000 people was busy with tourists late in October. We enjoyed a walk along the bay on both occasions.

The bay was a mirror when we stopped for breakfast one morning. We could hear pigeons on their gazebo perch across the channel. A flock of mallards bathed and showered in the channel, as they flapped their wings and sprayed water high into the air. 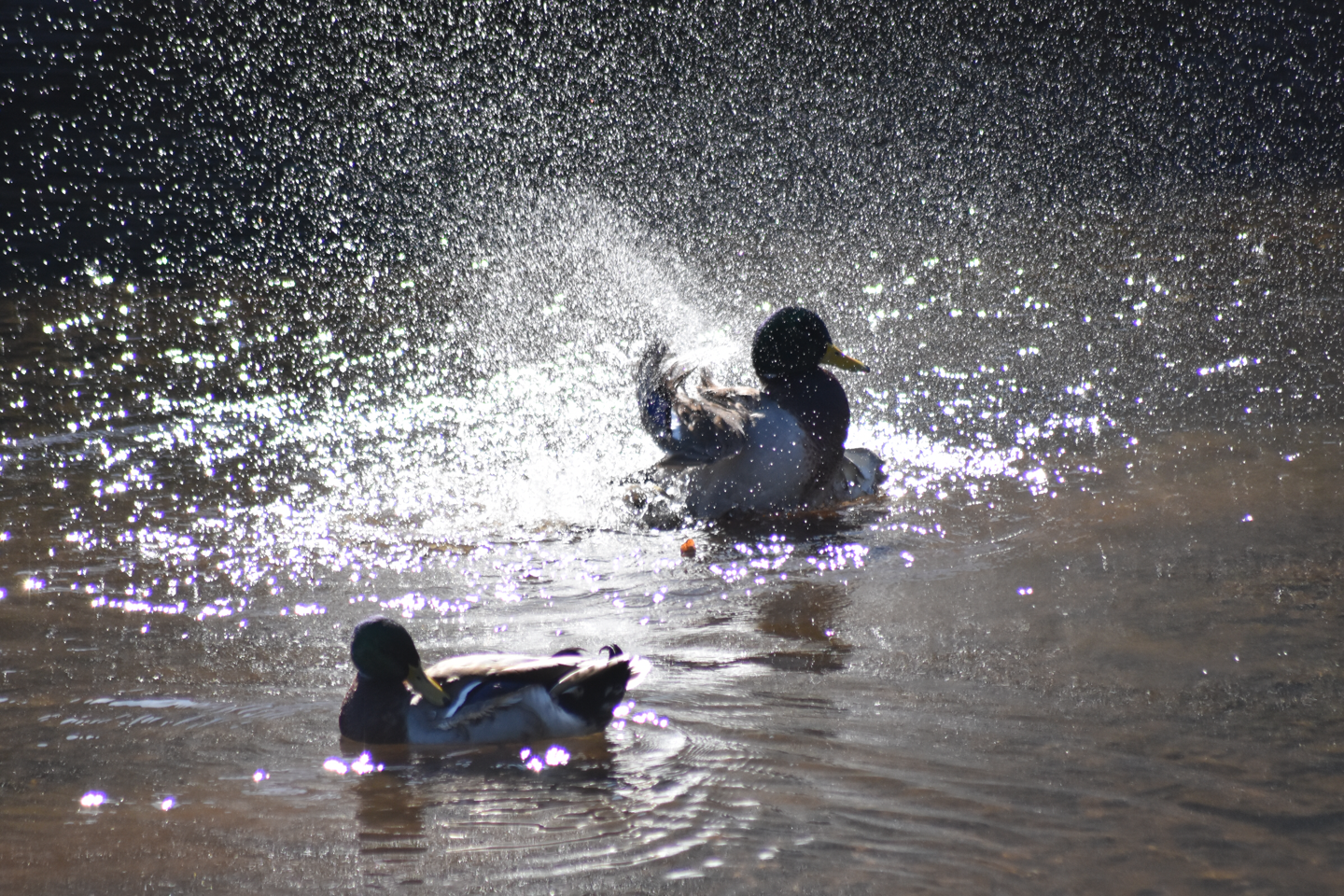 A house at the head of the bay looked its best reflected in the water. 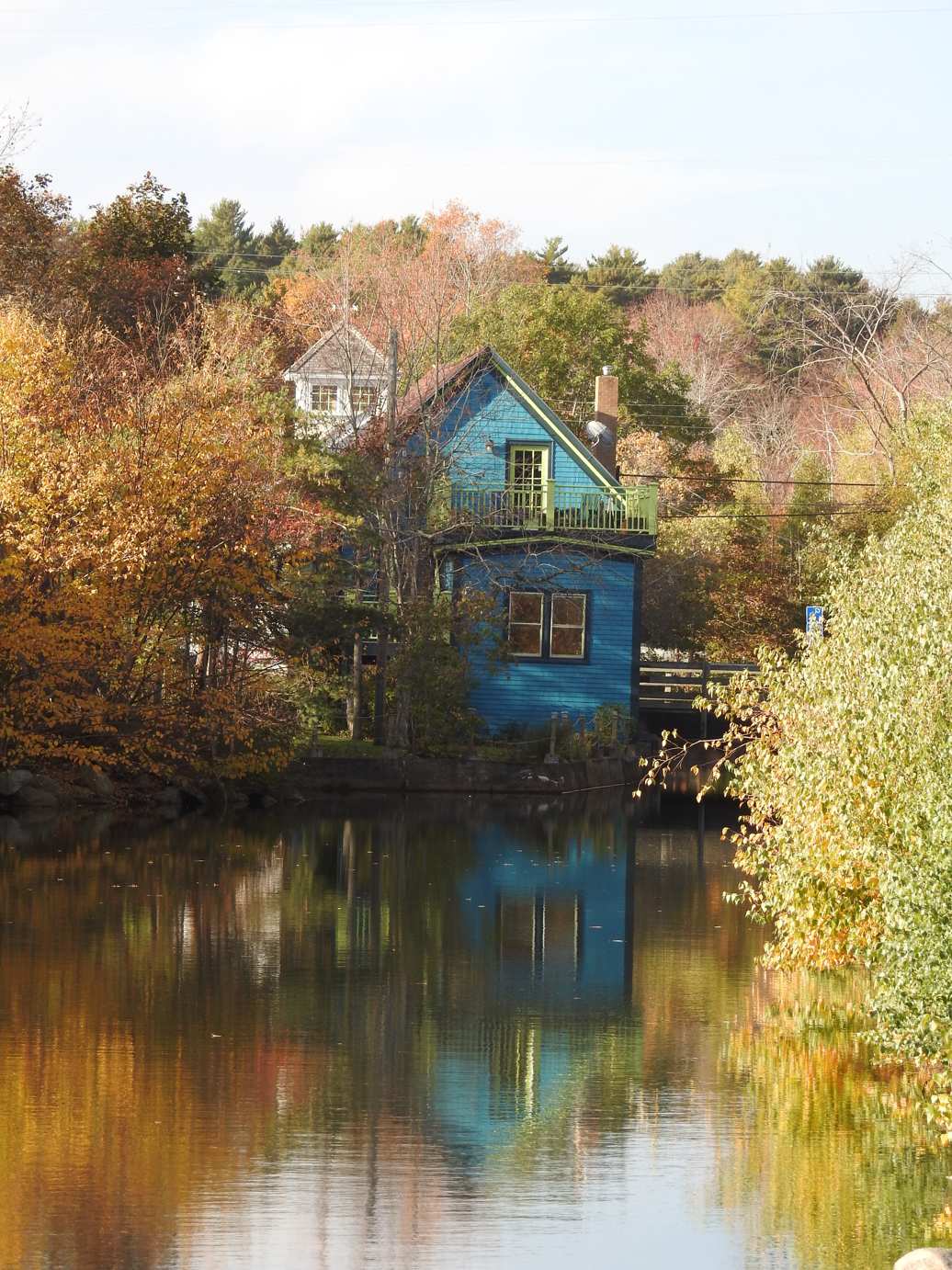 On the bay, several floating cottages looked like ideal retreats. 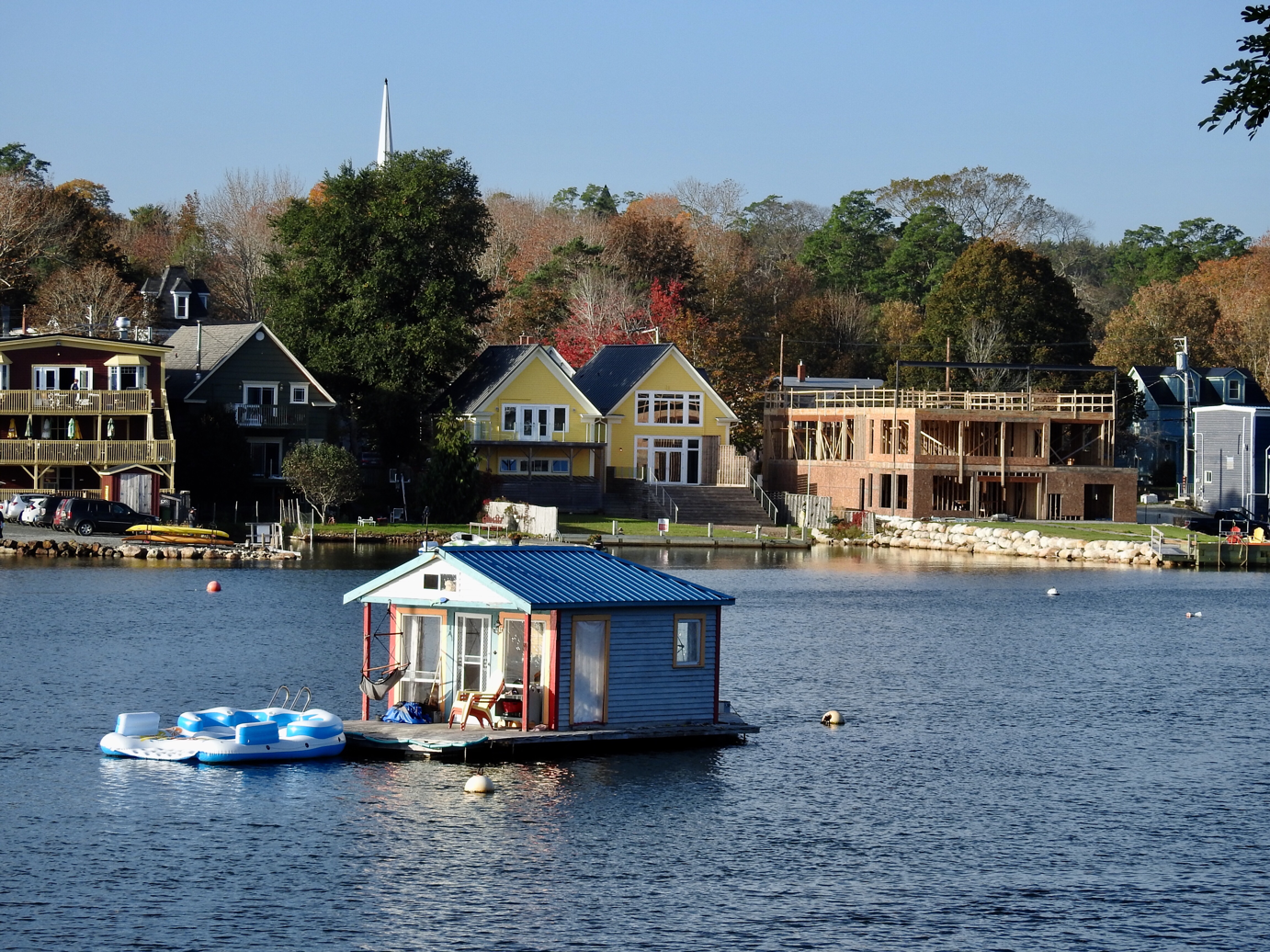 The three churches, famous in pictures of Mahone Bay, were difficult to photograph because of the light. This was the best photo. 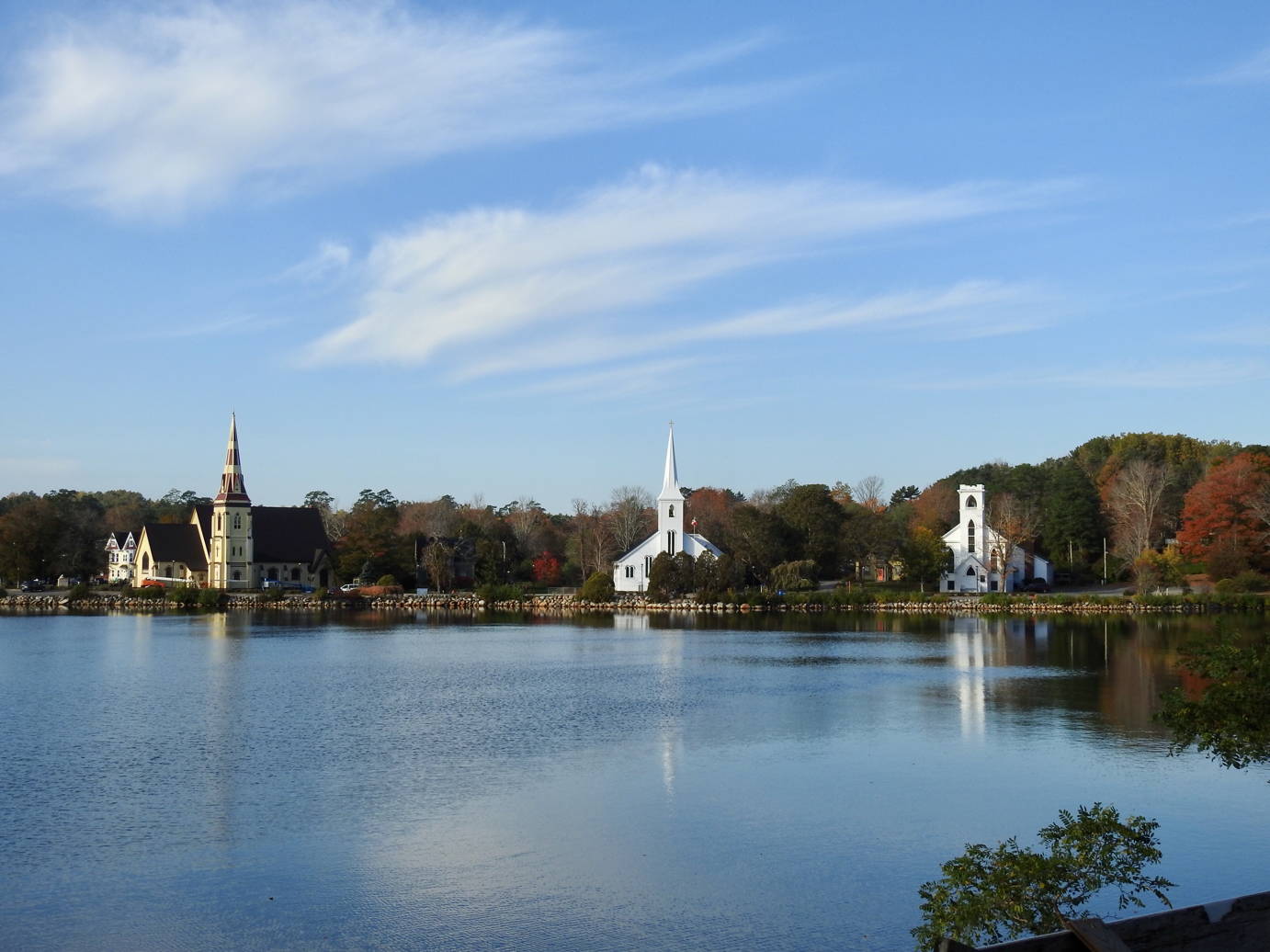 Trinity United in on the right.

St. John’s Lutheran is in the middle.

St. James Anglican is on the left.

I will visit Mahone Bay again in pursuit of a great photo of the three churches.

What a beautiful place, calm and serene atmosphere. The photos look wonderful indeed. Thanks for sharing.

Mahone Bay is a gorgeous place alright. And those famous Three Churches!

They are all lovely photos, but I'm glad you'll return to take more pictures, since it's such a beautiful place. I like the picture you did capture of the churches. :-)

so much beauty, there at the bay. the last picture of the three churches is really stunning!!!

Wow!! Love the photos. Can I live in that blue house on the bay?? I love an old church...seeing 3 like that together in a photo is spectacular!

What an absolutely GLORIOUS place. Thank you.

Those photos are great, Marie. The blue house and its reflection is my favorite, the photo is perfect! The image with the three churches looks fantastic, I like it.
Thanks for the impressive tour.

For some reason I am having trouble looking at the photos, but I have been to Mahone Bay so I am using my imagination!!!!!!

All your photos are wonderful, but the third from the end is GLORIOUS!

I love water reflections, and I love the 3 churches, not many places could you get 3 of them in one photo. Take care, Cheers Diane

We drove through way back when. We stopped at Tims and I took a photo of those three churches. Although it was 7+ years ago, I pictured the churches right away.

It is serene for sure, B.

Love the churches refelcted in the water, Debra. Have to take that shot one day!

The church photo here is the best of many, taken at different locations, Jan. I look forward to going back to try for a better one. Now I know what location to start from.

Thanks, Debbie. It's not too bad but there are better to be had.

That blue house was so pretty reflected in the water, Jenn.

I love the blue house photo too, Bill.

The photos are big files, Shammi.

i would love to visit those cottages on the bay, FG. My husband, not so much!

The blue house is too close to the water for my comfort but it is so pretty, Jenny.

The church photo is THE one to take in Mahone Bay, AC.

Beautiful little place. Love the houseboat. Now that is my idea of boating.

It must have looked so different during those ship building days. It looks so beautiful and serene now. Sarah x

I loved those cottages on the bay on a calm day, Barbara.

It is gorgeous there, Sarah.

These are the most gorgeous pictures. I appreciate you sharing with us.