It was a day of celebration. Our grandson Owen turned one and we were also celebrating Mother’s Day on the first opportunity we could all be together. After our traditional Mother’s Day lobster dinner, fishing with our daughter and the kids was on the agenda.

When they arrived, the kids dug for worms with Poppy in Nanny’s vegetable patch. 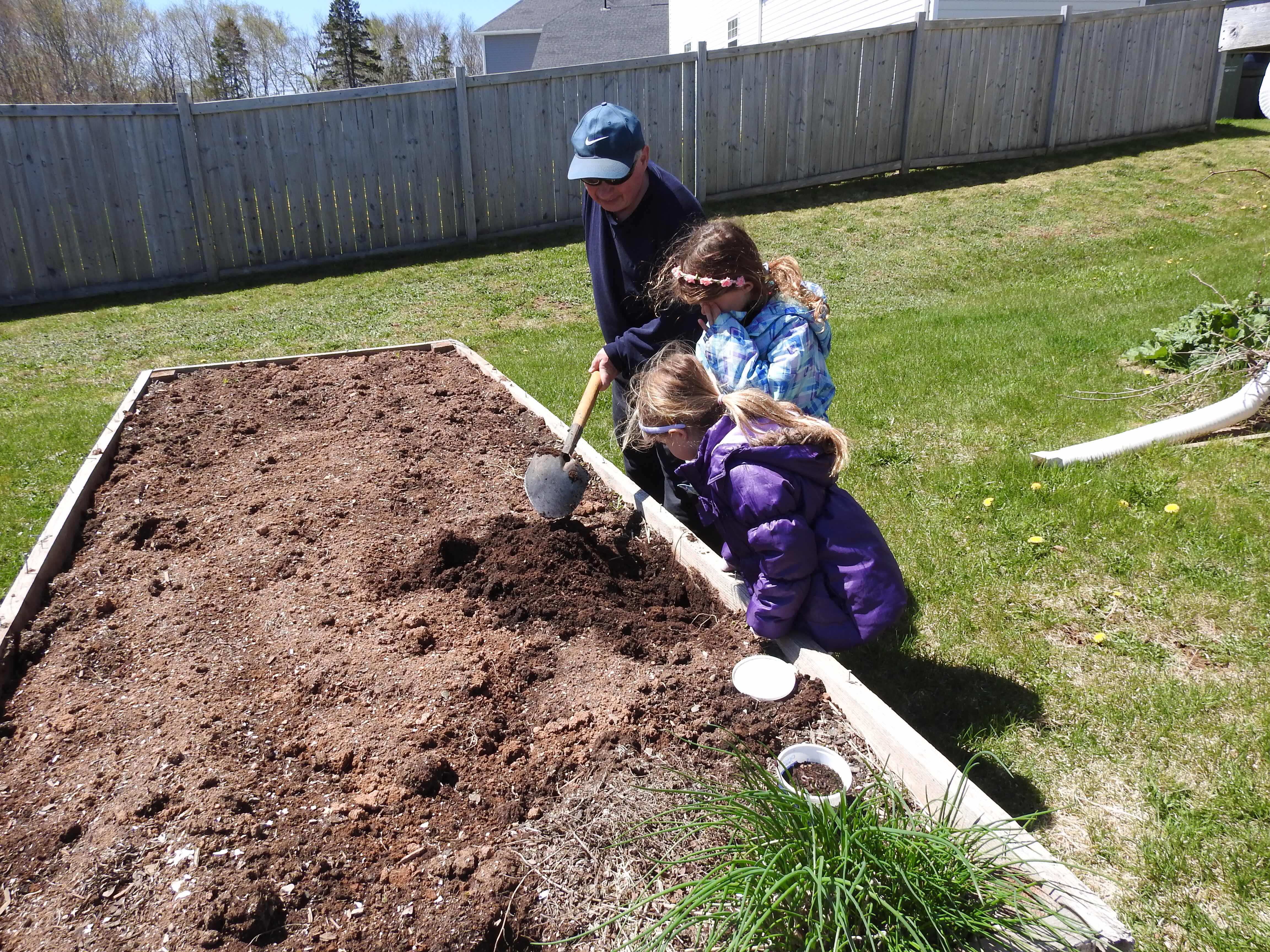 Both girls looked for the fattest, longest and most active worms and were happy to handle them. Caitlin referred to them as, “The juicy ones.” 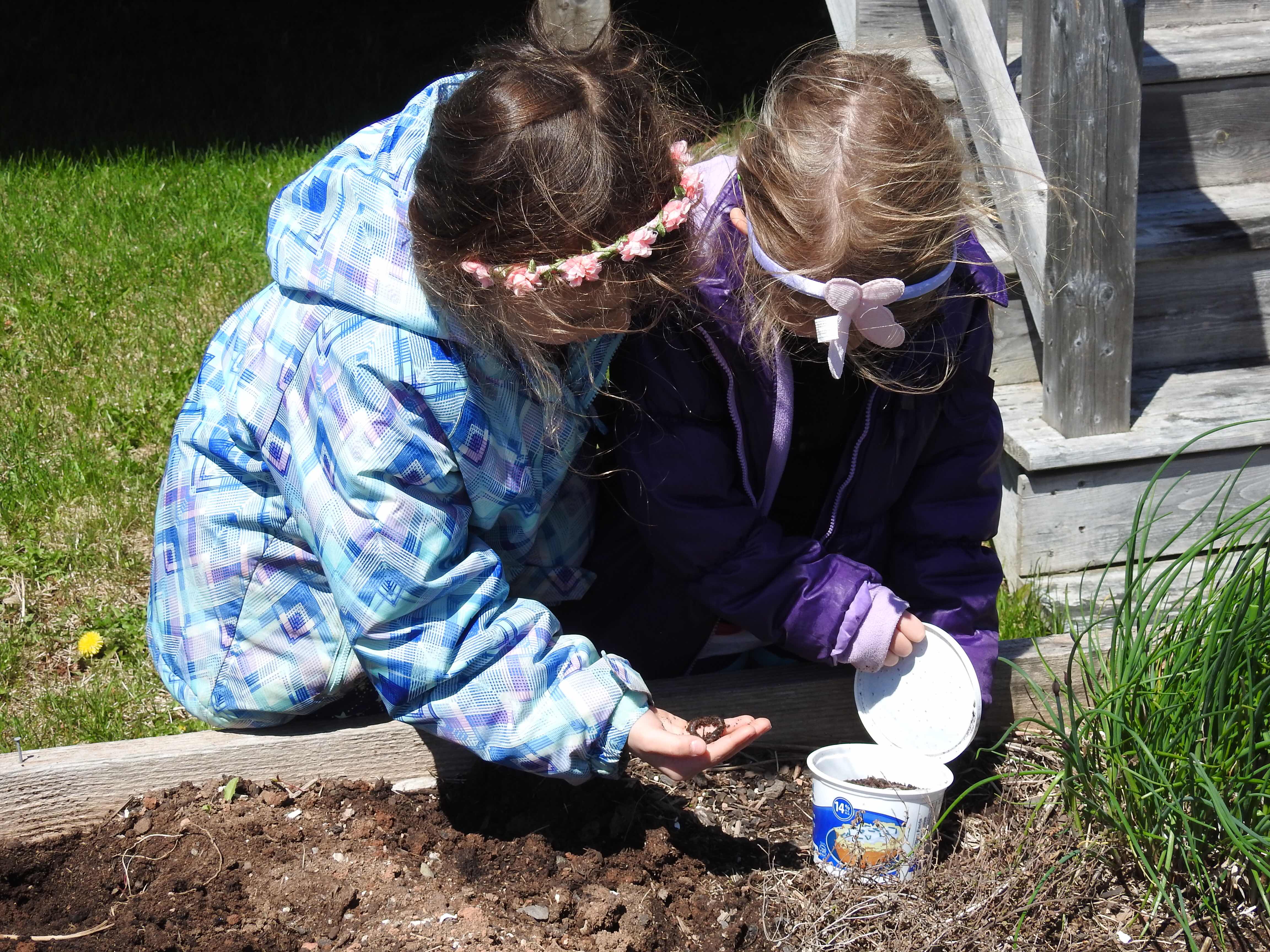 Lobster for Mother’s Day is usually our first lobster of the season. This year, we also had fresh snow crab, a real treat that we will add to our menu more often this time of year. The kids, including Owen, love crab as well as lobster.

Dessert was chocolate cake and since it was his first birthday, as is our tradition, Owen fed himself the cake. 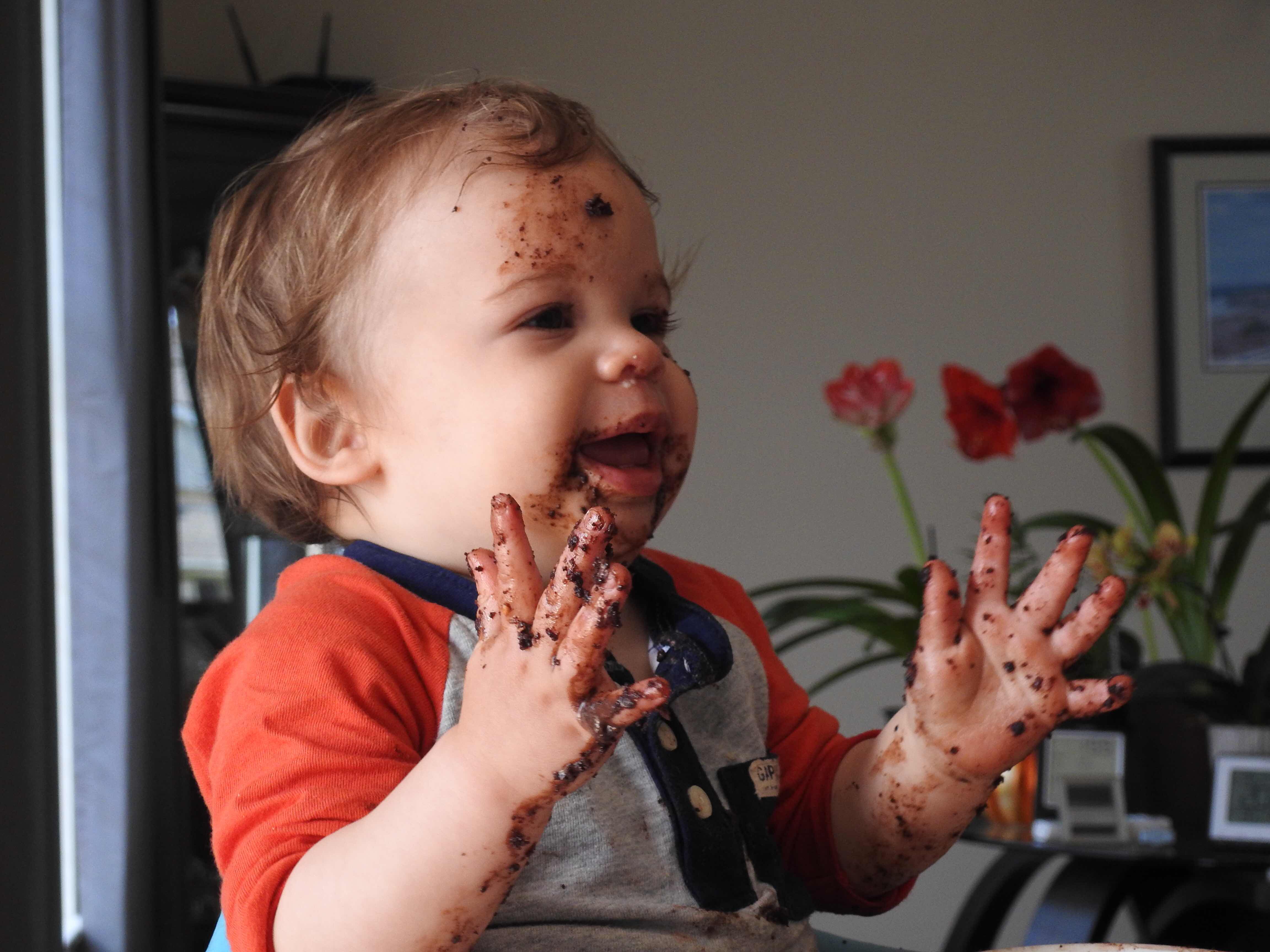 He needed a bath before we headed out to the pond for an afternoon of fishing.

This expedition on this beautiful spring day was perfect in every way. Sylvie, who didn’t catch any trout last time, caught six. 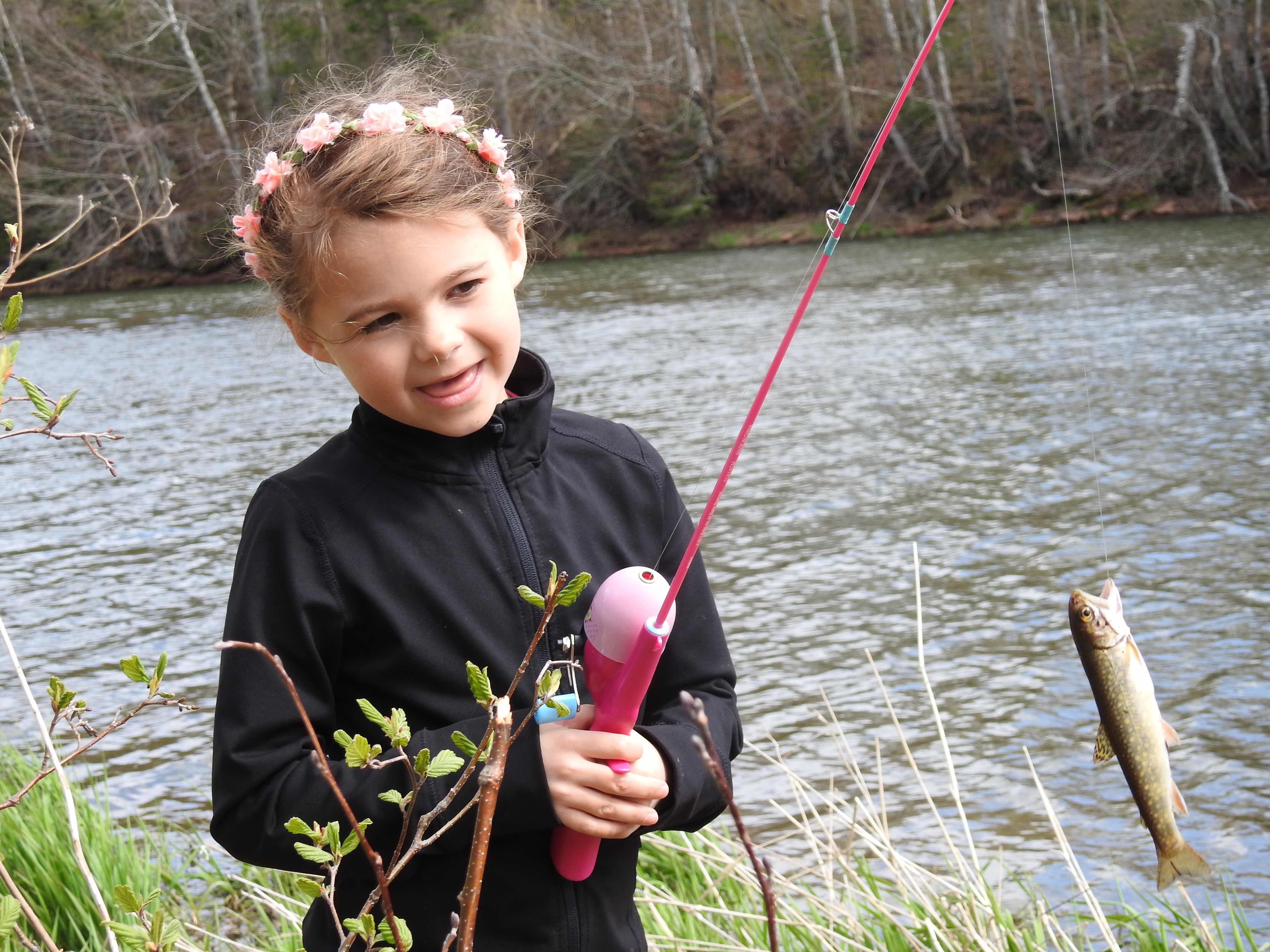 Caitlin eventually caught four as did our daughter, though all were released back to grow bigger. 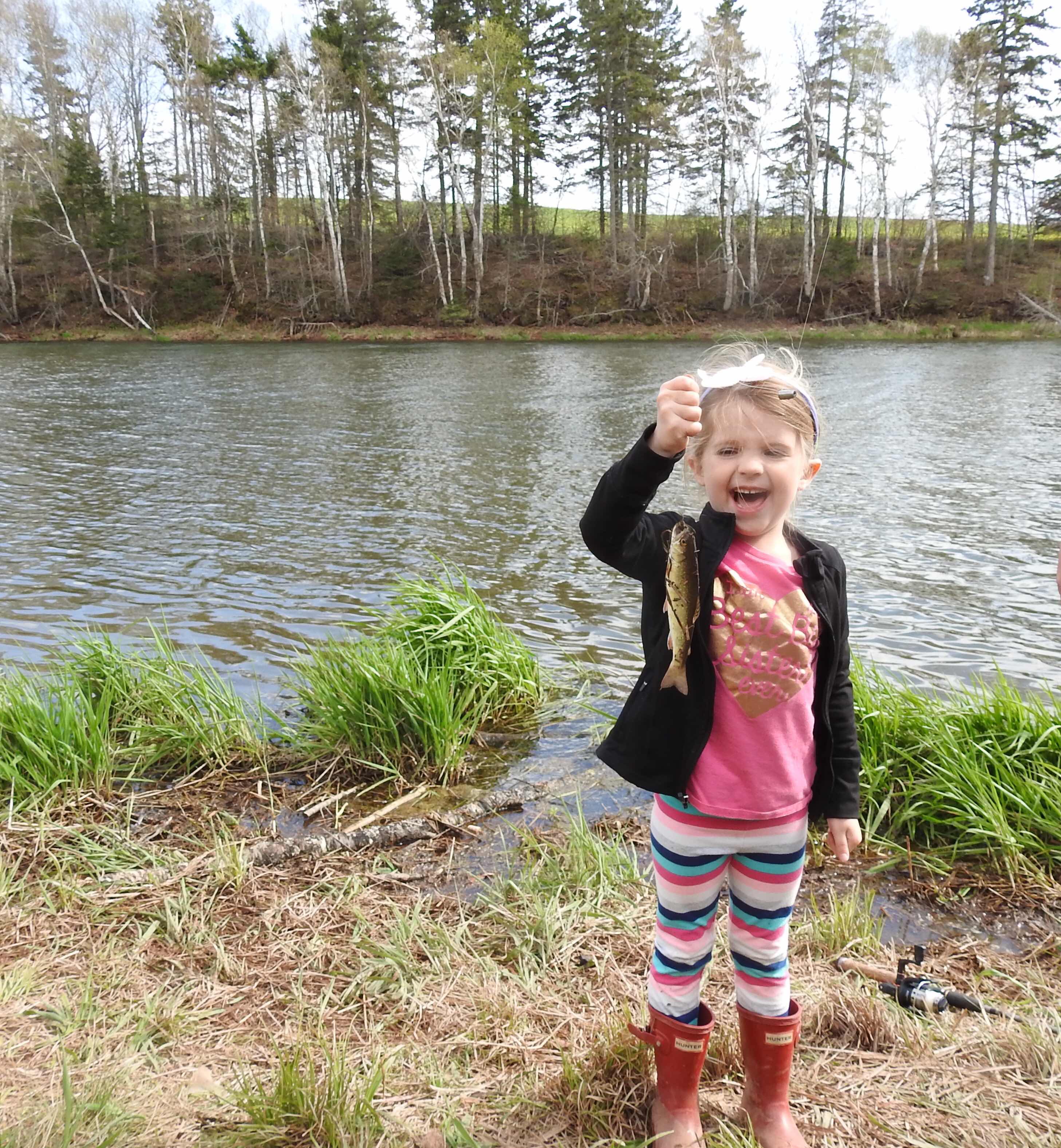 Owen, Poppy and I were observers. And happy ones at that!

It was a perfect celebration.

What beautiful children! And it looks like it was just the best Mother's Day ever. You are such a fortunate mother, Marie. Thank you for sharing your grands with me in these pictures. :-)

It does indeed sound like a perfect day Marie.. your grandchildren are gorgeous, I wish so much that we were a bit closer to ours ✨

Happy Birthday to Owen. All three are beautiful children and they have the best smiles!
Sounds like a lovely time together.

SIX trout! FOUR trout! Man, those worms must have been EXTRA juicy!

Wonderful time with the kids! You are a lucky gal.

Love the look on Owen's face, your grandkids are sweeties.

Owen seems to have enjoyed the cake!

Sounds like a fun day and I love Owens face with the chocolate over everything. LOL. Keep well Diane

Looks like a lot of fun! The cutest pictures are those of a child with his/her fish! Andrea

I love babies who need a bath to leave the table, and little girls who befriend worms.

What a great tradition! I hope it last awhile longer.

It sounds and looks like the PEFECT day. Love that face-painting with cake is an early birthday tradition too.

A great day had by all! Owen really enjoyed the chocolate cake. :)

That is wonderful!!
All together enjoying the day.
:)

What a wonderful time for all are together!Your grandchildren are sweet.
I notice that the pink fishing pole your granddaughter uses is pretty!!

Thank you posting all this joy. You allowed us to be very happy observers too.

What cute kids, all of them. I remember fishing with my Dad and my two sisters. He was so busy putting worms on the line, until we learned how, that he didn't get to fish at first.

oh how wonderful...and that will be a great fish story!! happy birthday owen!!

It sounds like the perfect day. And your dinner sounds delicious!

I am well and truly blessed Jan.

It was the best thing we ever did when we moved near our daughter PDP.

We were sll smiles that day Mildred.

It was fantastic Linda.

He certainly did William.

First birthdays are the best Diane.

Catching a fish is an exciting time for the kids for sure Andrea.

I hope so too AC.

First birthdays are the best EC.

It was a fantastic day Bill.

It was a perfect day Catarina.

It was a joyful day Mage.

There were three of us baiting the lines for the kids. They kept us busy Barbara.

THe seafood was wonderful Danielle.

I love seeing the cake smeared birthday boy! That is our tradition, too. Your dinner of lobster and crab sounds delicious - both those foods are my husband’s dream come true. Lovely photos of the happy grandchildren.


Caitlin said her tish was 70 pounds. She’s got the fishing stories down already, Debbie.

It was a marvelous day, Barb.