It’s called the Goat Trail, on the eastern side of the Bonshaw Hills in Prince Edward Island. For my husband and I, accustomed to walks on this relatively flat island, this trail requires the skills of a mountain goat. The trail provides challenges but much to see. We were happy to accept the challenge with the golden grand-dog off-lead on the deserted trail.

One of the challenges is the grade of the trail. It descends to the West River from the Bonshaw Hills and travels up the hills again. While part of the trail is at river level, another part is above the river, a trail which clings to the edge of a slope. 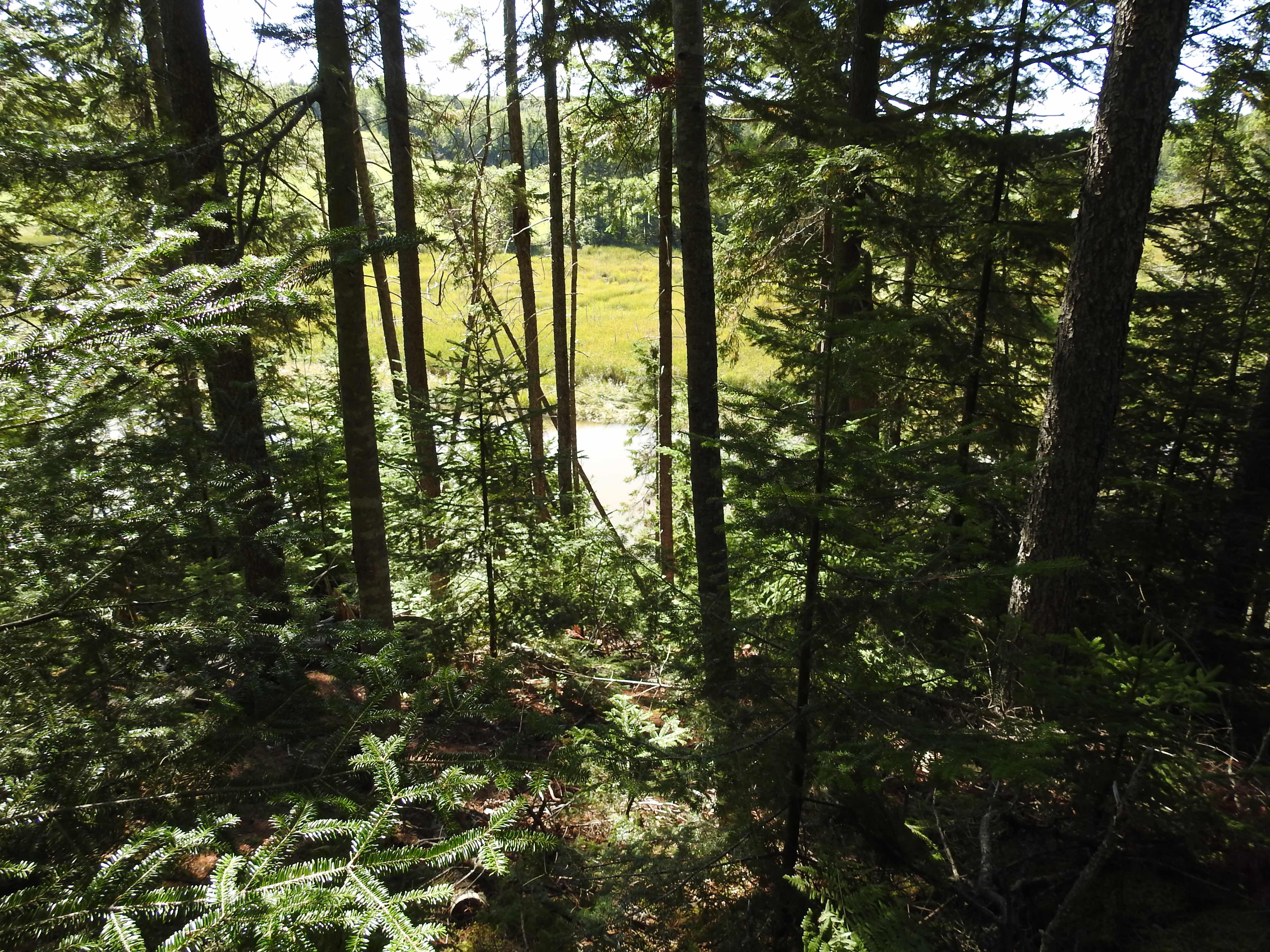 The trail has rocks along part of its length too 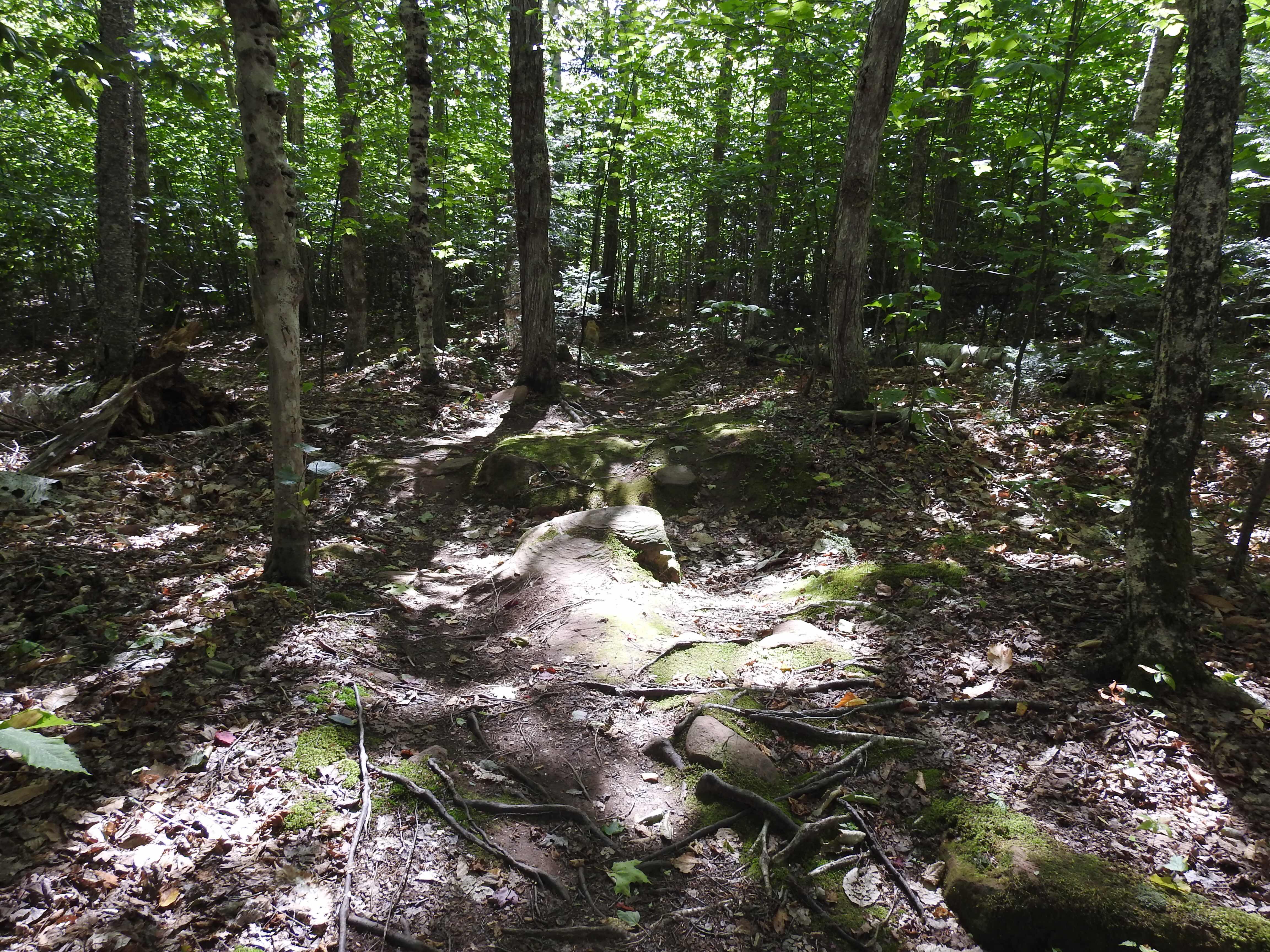 and many tree roots. 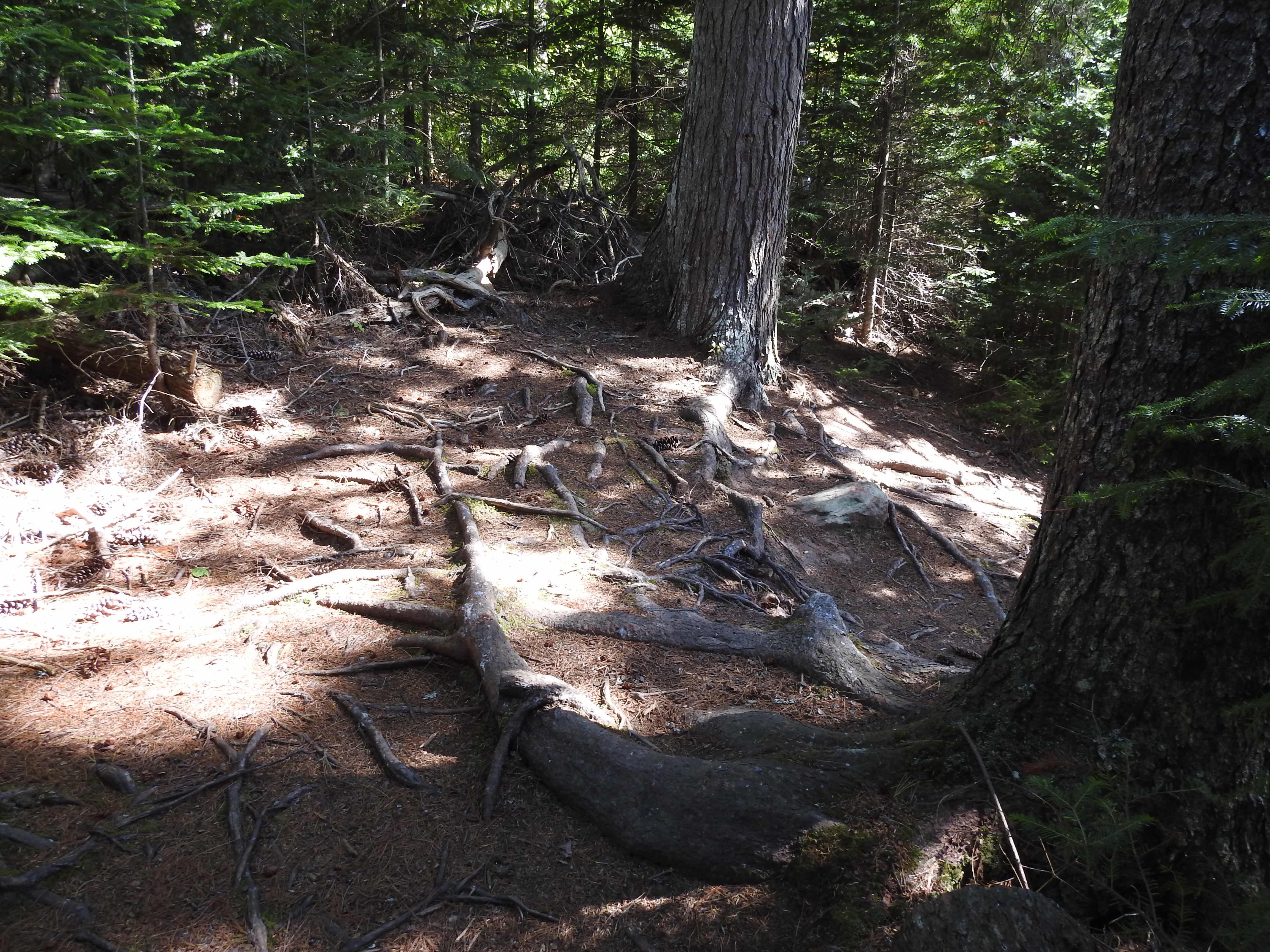 These make it necessary to keep your eyes on the trail at all times to prevent injury. We considered how we would describe where we were to rescuers and how anyone could take us out if we were injured. Therefore, we kept our eyes glued to the trail, measured every step and occasionally stopped to look around. It was so worth the effort.

The pines were tall and stately, huge trunks erupted through the needle and cone-covered earth, 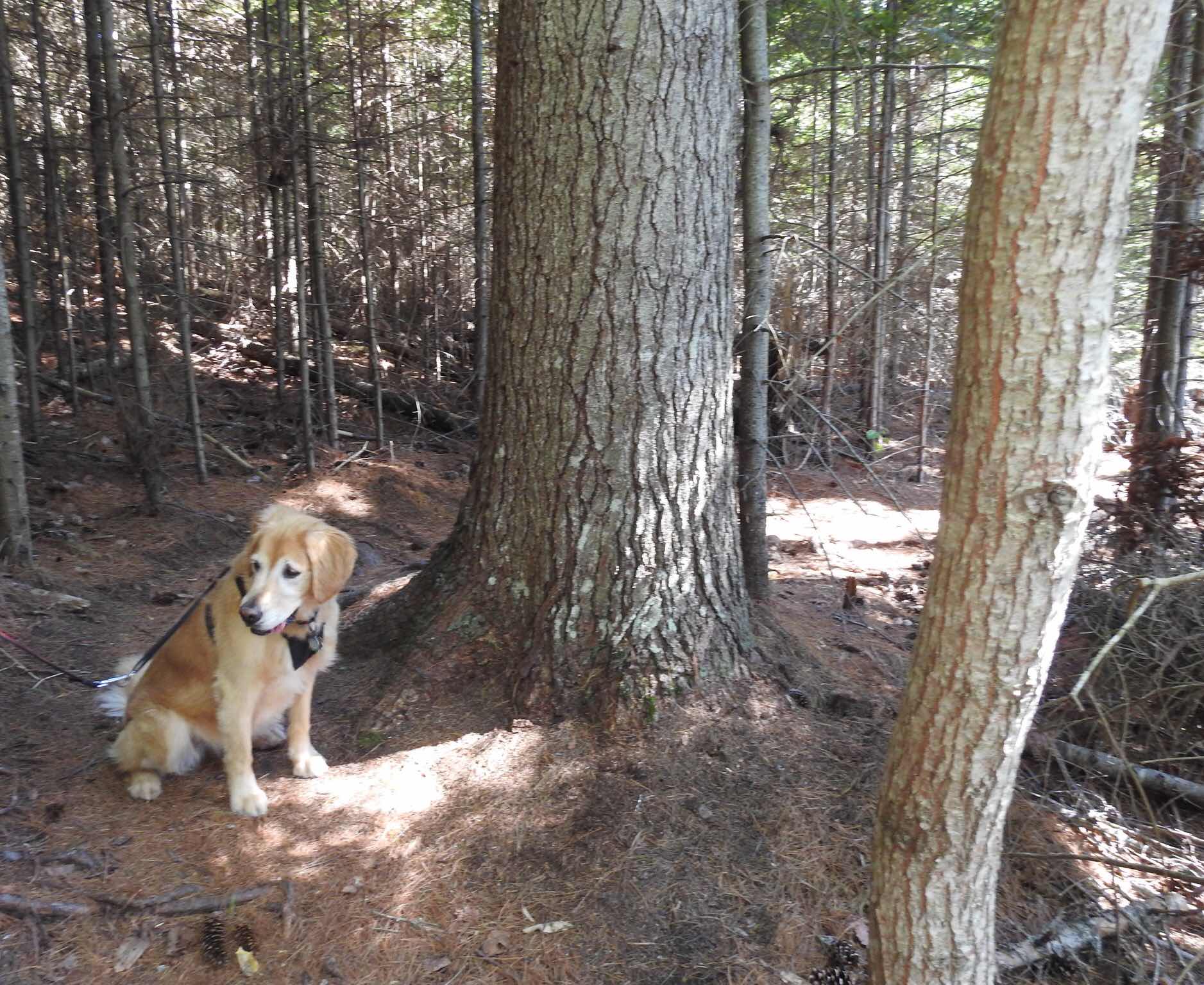 with green needles in the top canopy. 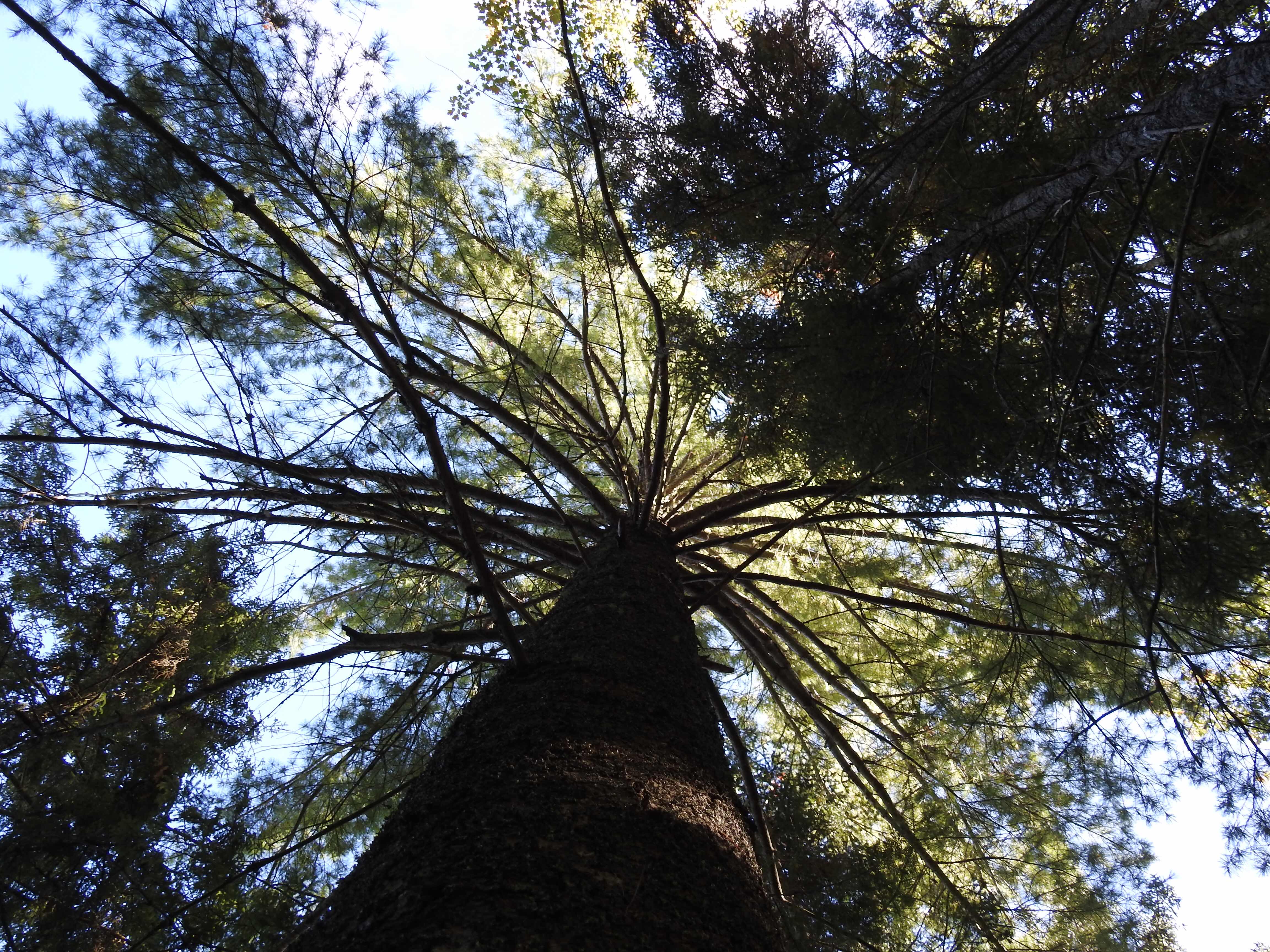 As we trekked downhill and the river came within reach, Georgie, the golden grand-dog, ran down the slope into the water and rolled around in the red mud on the shore. We called her back and were sprayed with water and mud as she shook the mess over us. 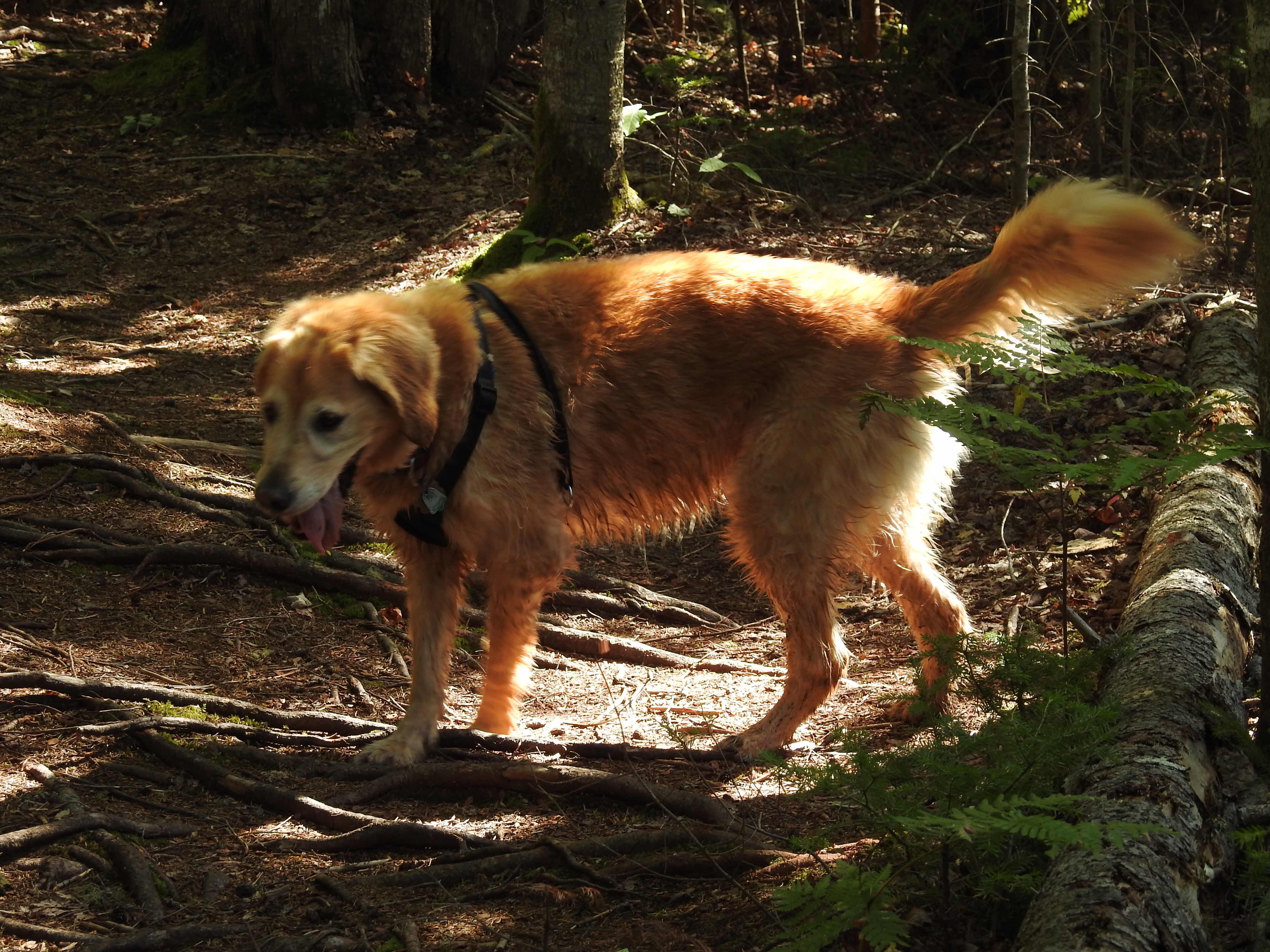 All we could do was laugh.

One trunk was split at ground level upward, 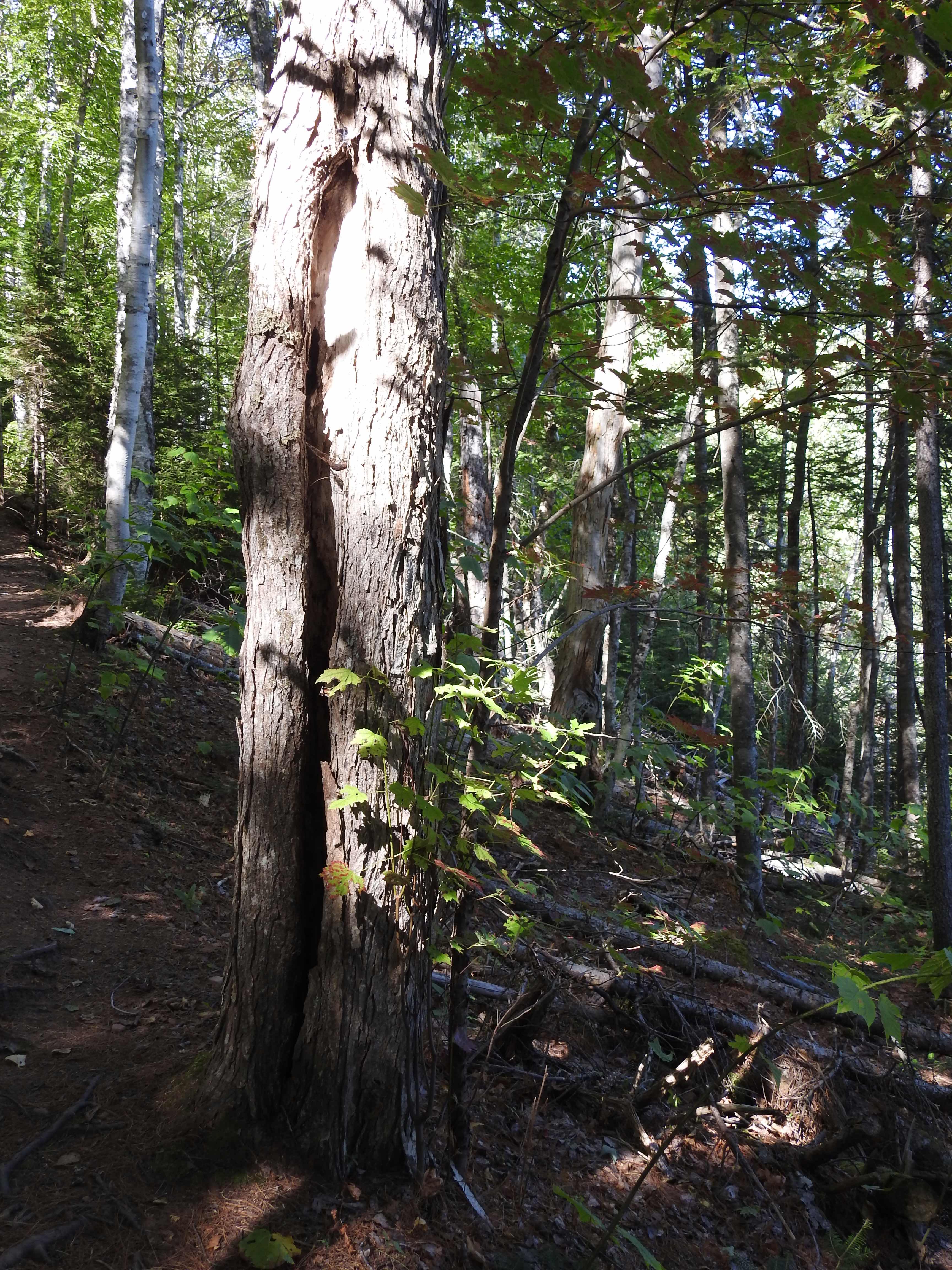 another had a burr, 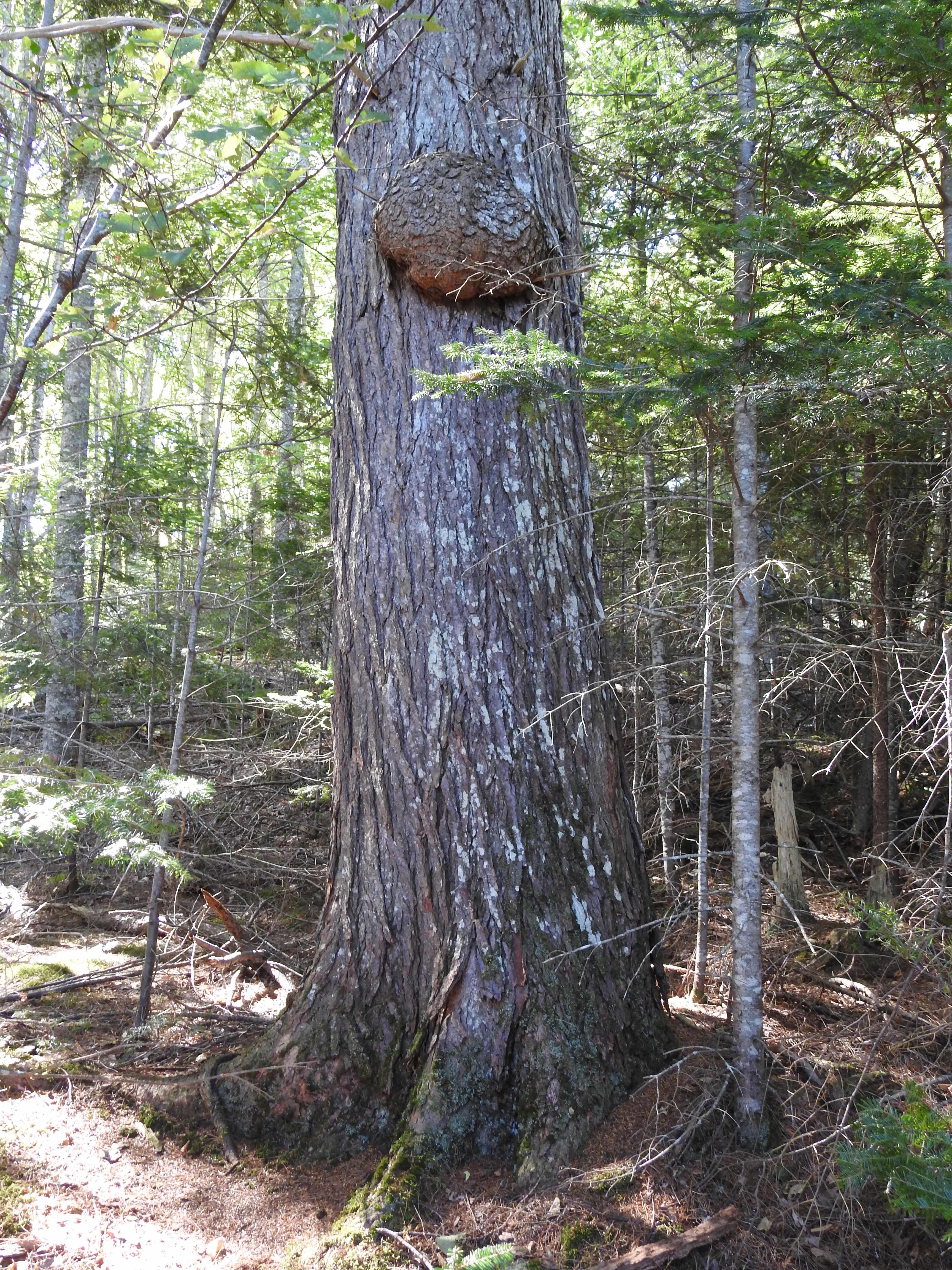 while another had a hole through the roots at ground level. 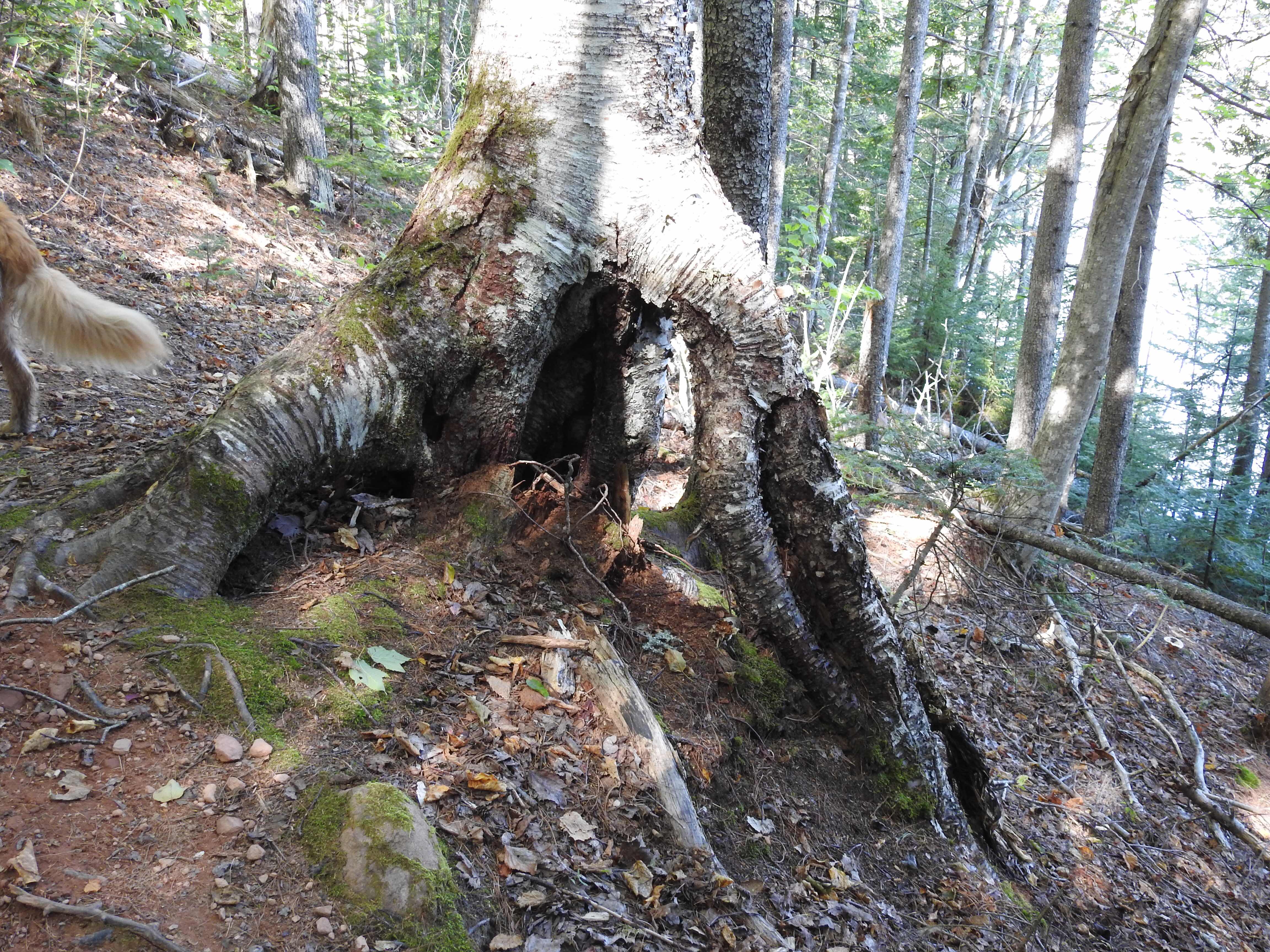 The colourful signs of autumn at ground level were missing but overhead, an occasional deciduous tree showed its autumn glory. 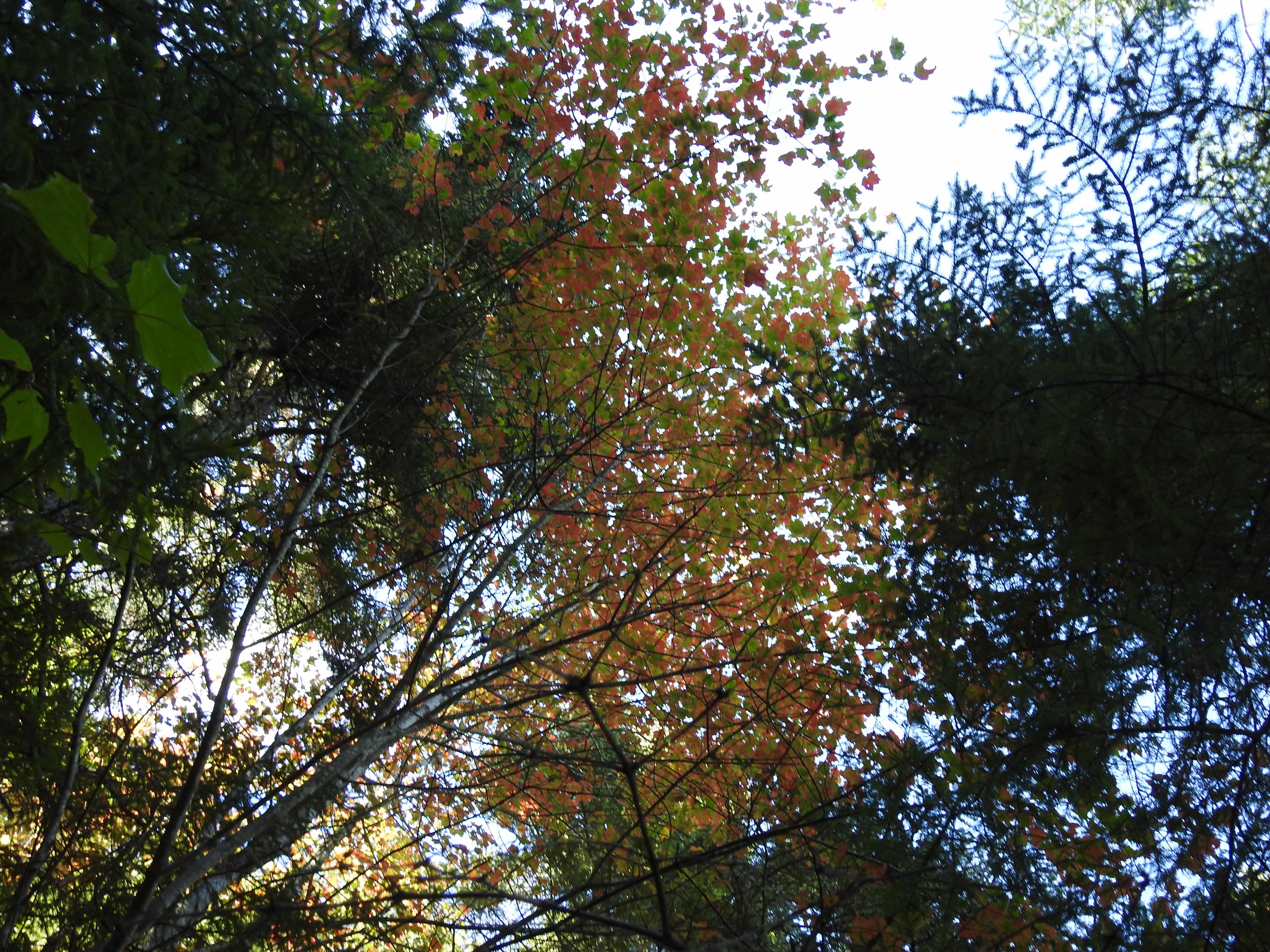 As we neared the end of the Goat, a tangle of roots on the path was pure tree artistry which humans rarely see. 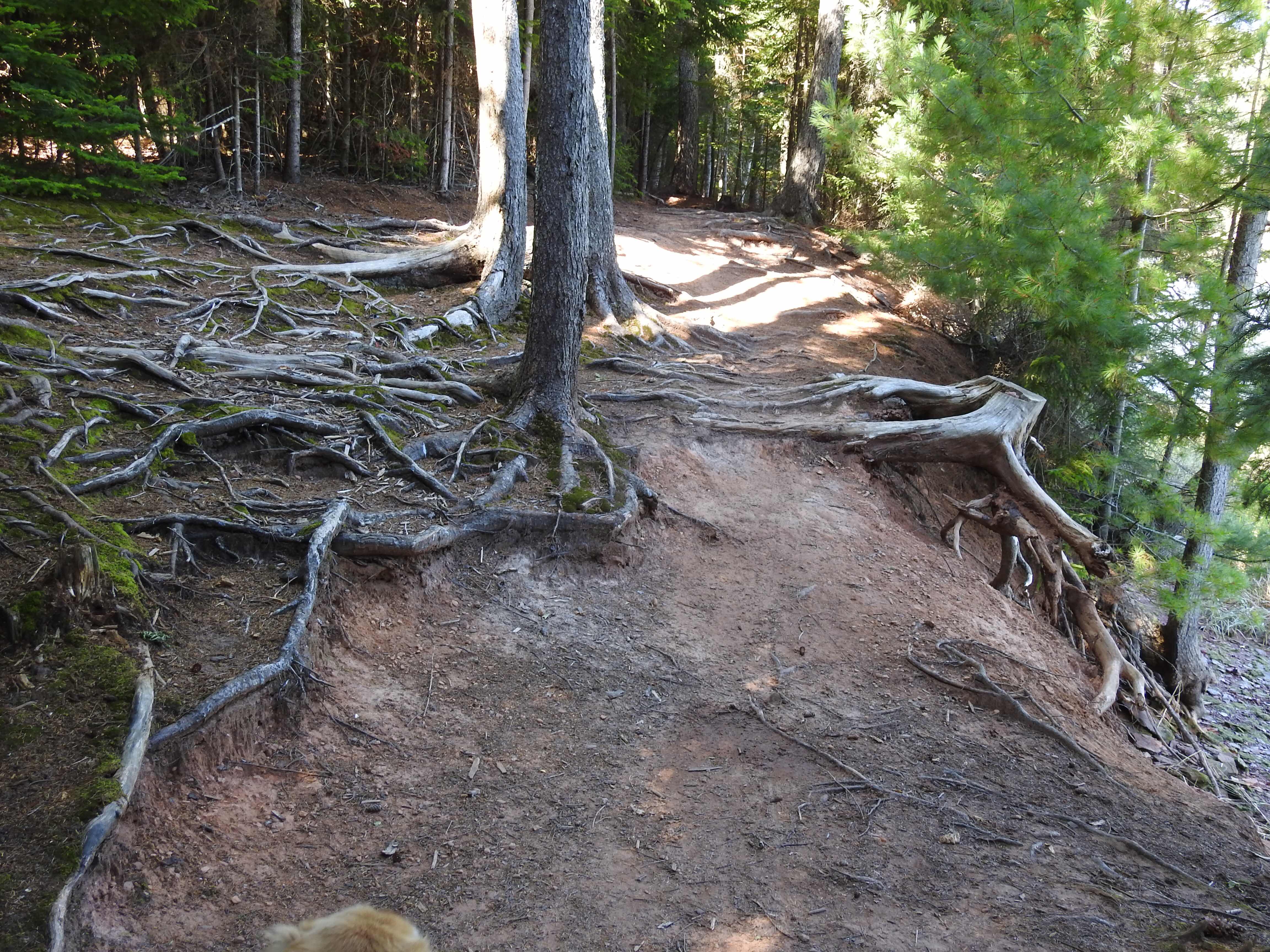 Goat trail is a difficult one but we will go back. 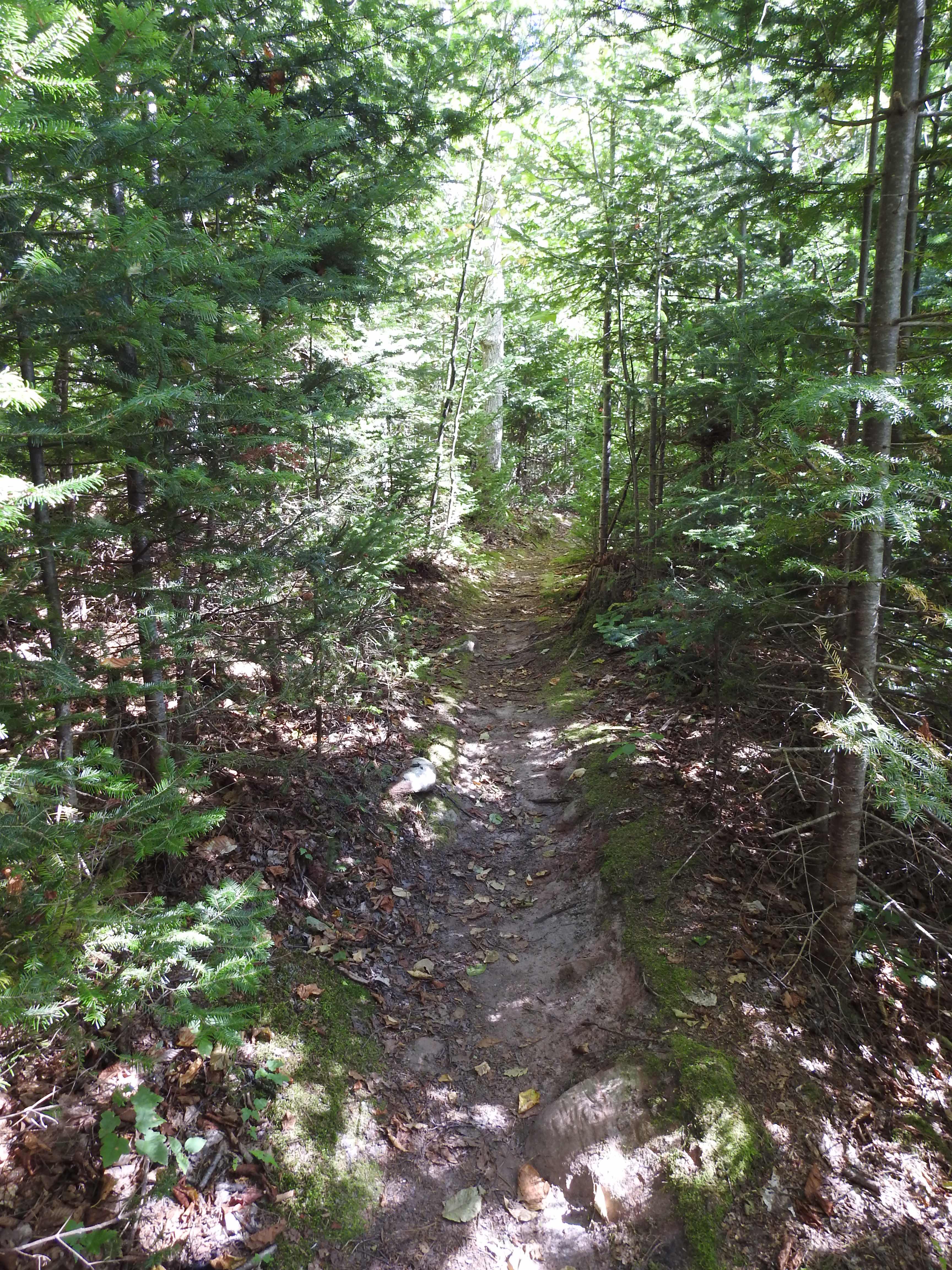 Love those gnarly old roots and magnificent trees! Glad you showed me Goat trail, I'd be on it if I lived there, too. How long is it, I wonder? :-)

Lovey quiet looking place. Just the sounds of nature I'd imagine. So wise to take care to be safe.

Goat Trail is a rather pedestrian name for such a lovely place. But to be honest, I love goats....they make me laugh. Great pictures Marie. Love the way you and the hubs explore.

Very difficult for me, but utterly delightful. I think I would personally skip the dog spray tho.

We are also staring to get the colours of autumn now, very pretty but I hate the temperature change!! Love those roots, very artistic in nature. Have a good day, Diane

Dogs will be dogs!

The trail reminds me somewhat of those in Algonquin Park.

Looks like as lovely trail! Reminds me of many I have been on in the mountains here with the tree roots and rocks!

What a nice trail to hike. I can see why one should pay attention, a trip over those roots could be devastating. Georgie probably enjoys the hike as much as you do. Great photos, Marie.

It does indeed look like a very challenging walk. And also worth it. Not sure I could do it - but I would certainly try. And I am glad you triumphed.

Good gracious. You'd better have your rescue plans laid out. I'd call that an obstacle course. A very pretty one but full of obstacles for sure.

I love it! Thank you so much for your great photos.

I'd love that walk. As far as any potential rescuers are concerned they'd probably have to come along the trail. The real problem, I'm informed by a friend who volunteered in mountain rescue for many years, is when people stray from the trail. On balance it's probably still wise to look where you're putting your feet!

When my husband and I could hike - we used to love those kinds of trails.

Challenging walks are so worth it Marie, but I agree, you definitely have to watch your step! You've put me in the mood for a hike this weekend 😊

Such a beautiful place. All your photos are wonderful but I'm especially thrilled with the one taken looking up the tree trunk - it's so hard to get a good shot like that and you have succeeded so well.

Wouldn't it be nice to be as sure-footed as our four legged friends?