The winds were high and it was bitterly cold with drifting snow for two days. During that time, few people walked the boardwalk in Summerside which meant the animals living along its length didn’t have their normal treats. They were hungry.

I saw them before I heard them, dozens of crows near the entrance to the boardwalk. When I opened the car door, their chorus of crow voices included tenors and bases singing harmony. As I approached the trails, they took to wing. 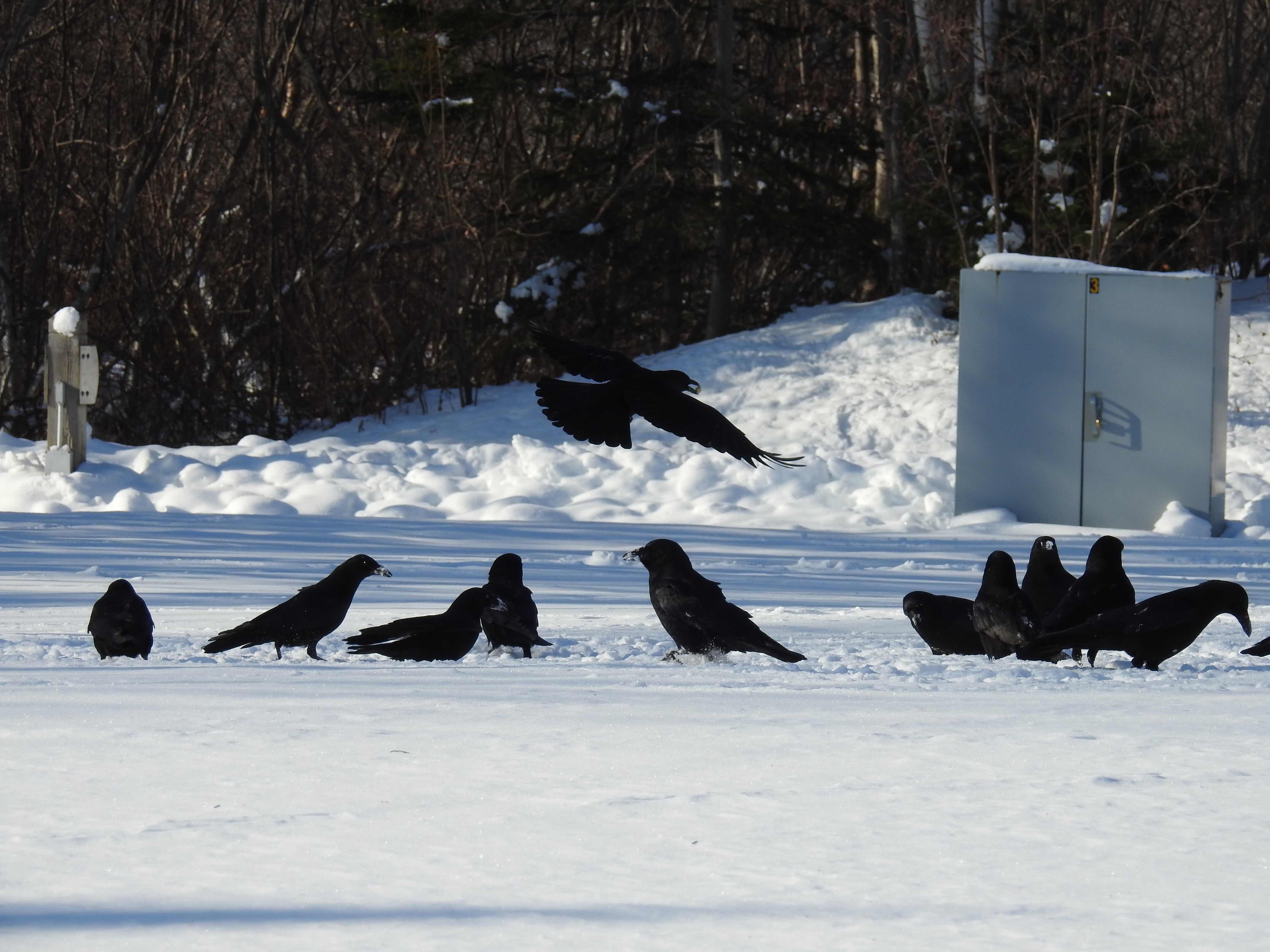 Crows are always present in this area though they are usually inconspicuous. Not this day. The murder filled the trees, 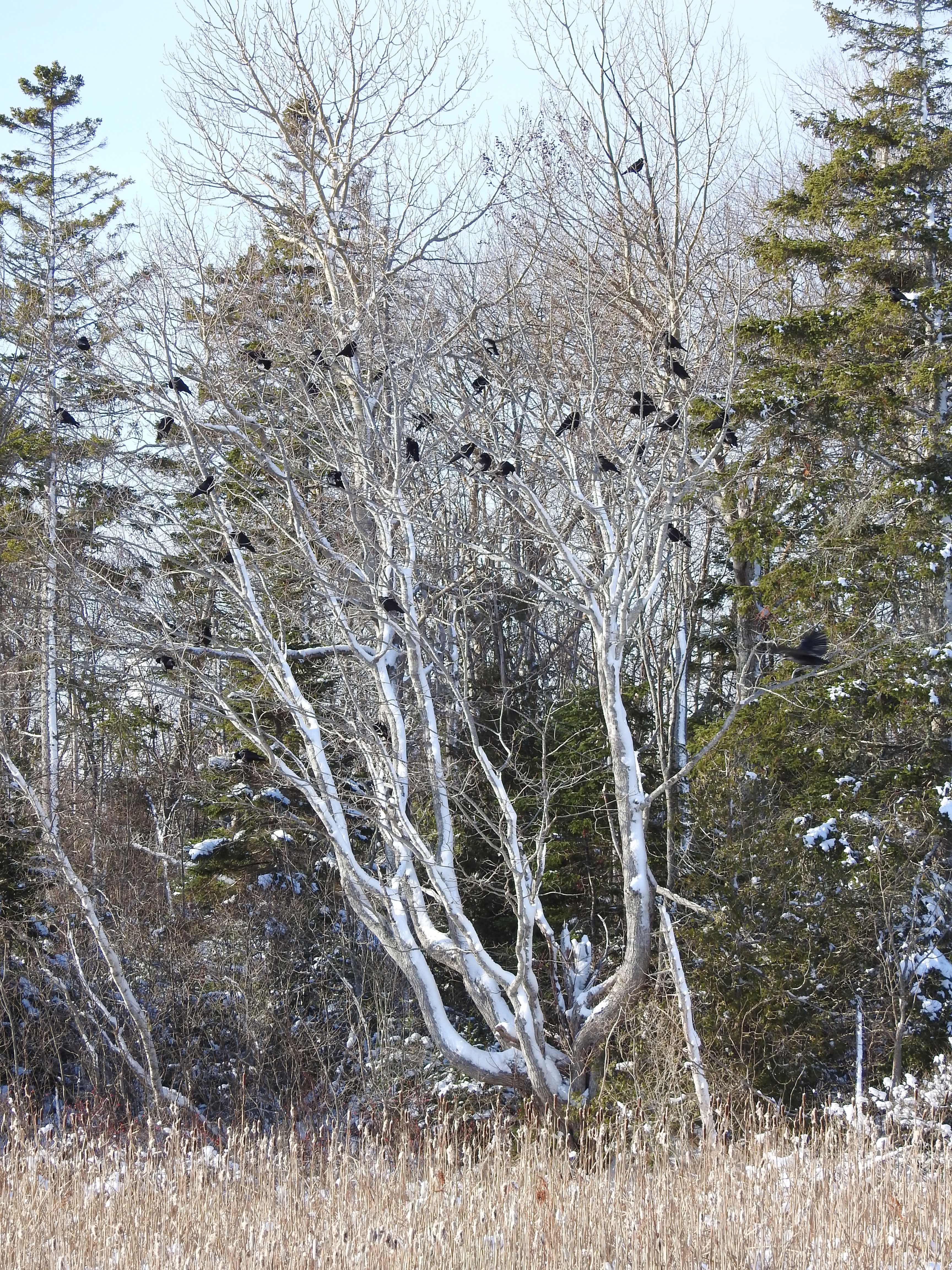 flew across the now frozen stream, 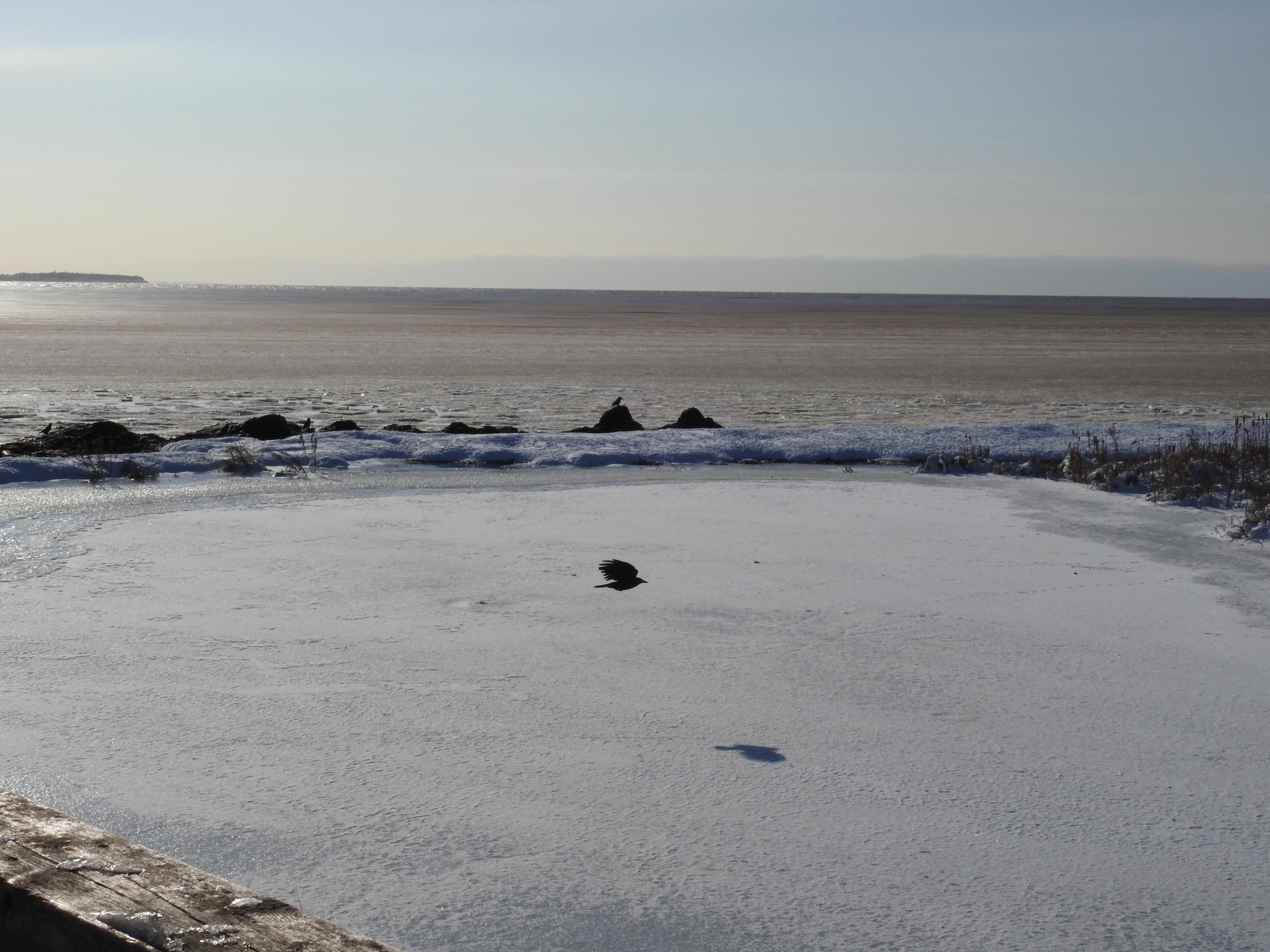 or landed on the bridge. 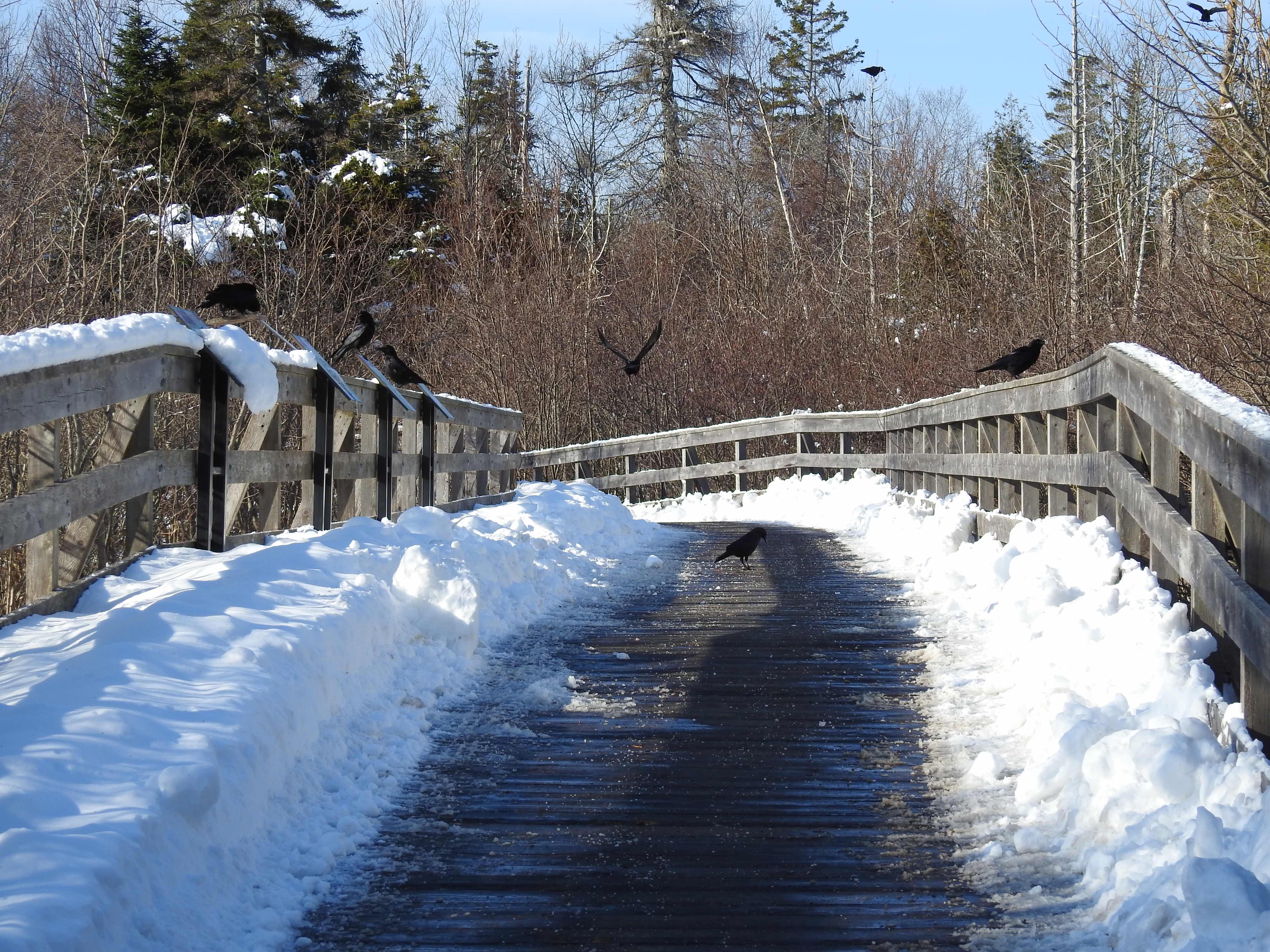 The chorus became solo performances and the whole area was alarmed. 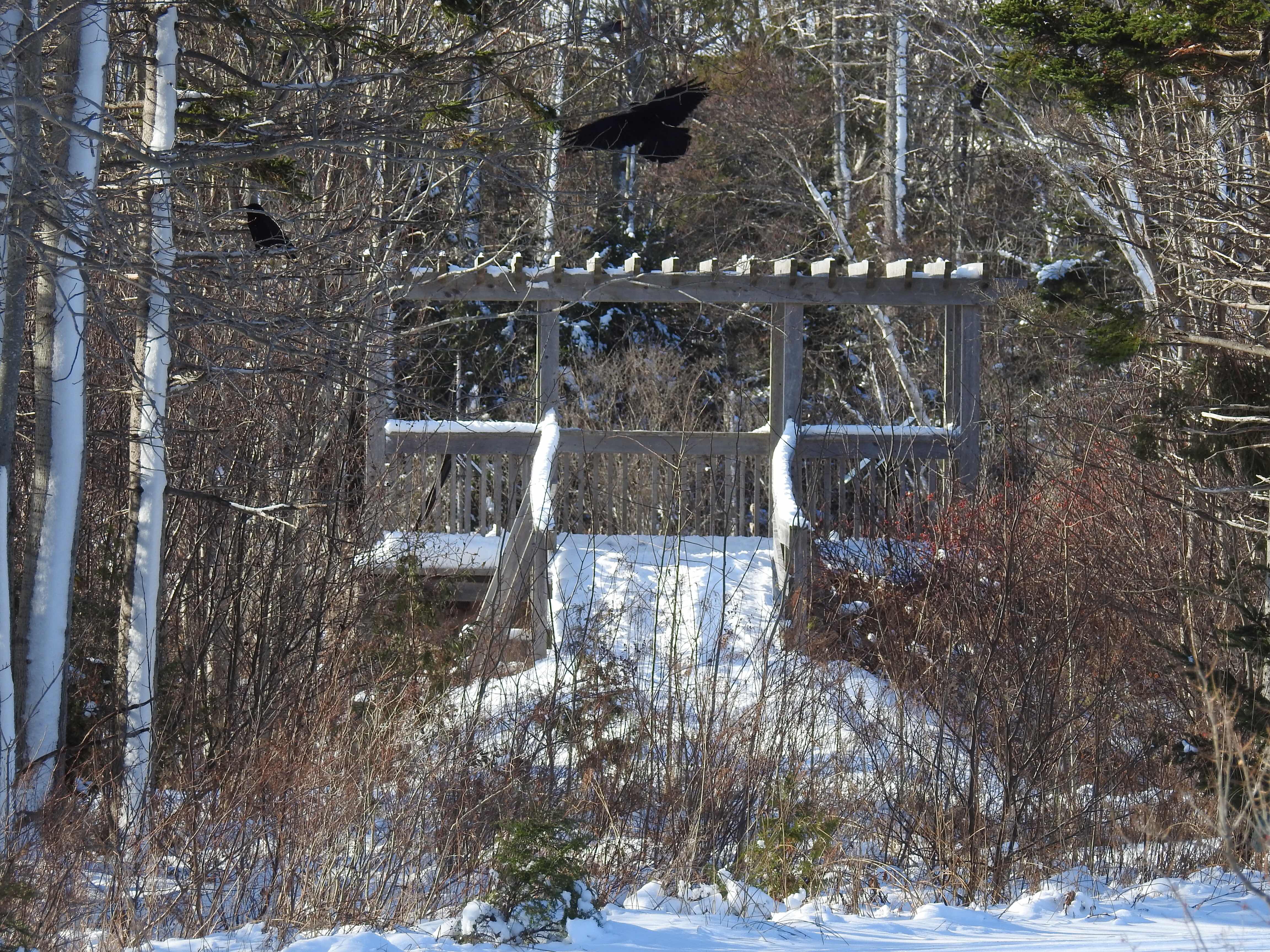 Meanwhile residents had been busy already, spreading peanuts and seeds in the usual places along the boardwalk as they walked. 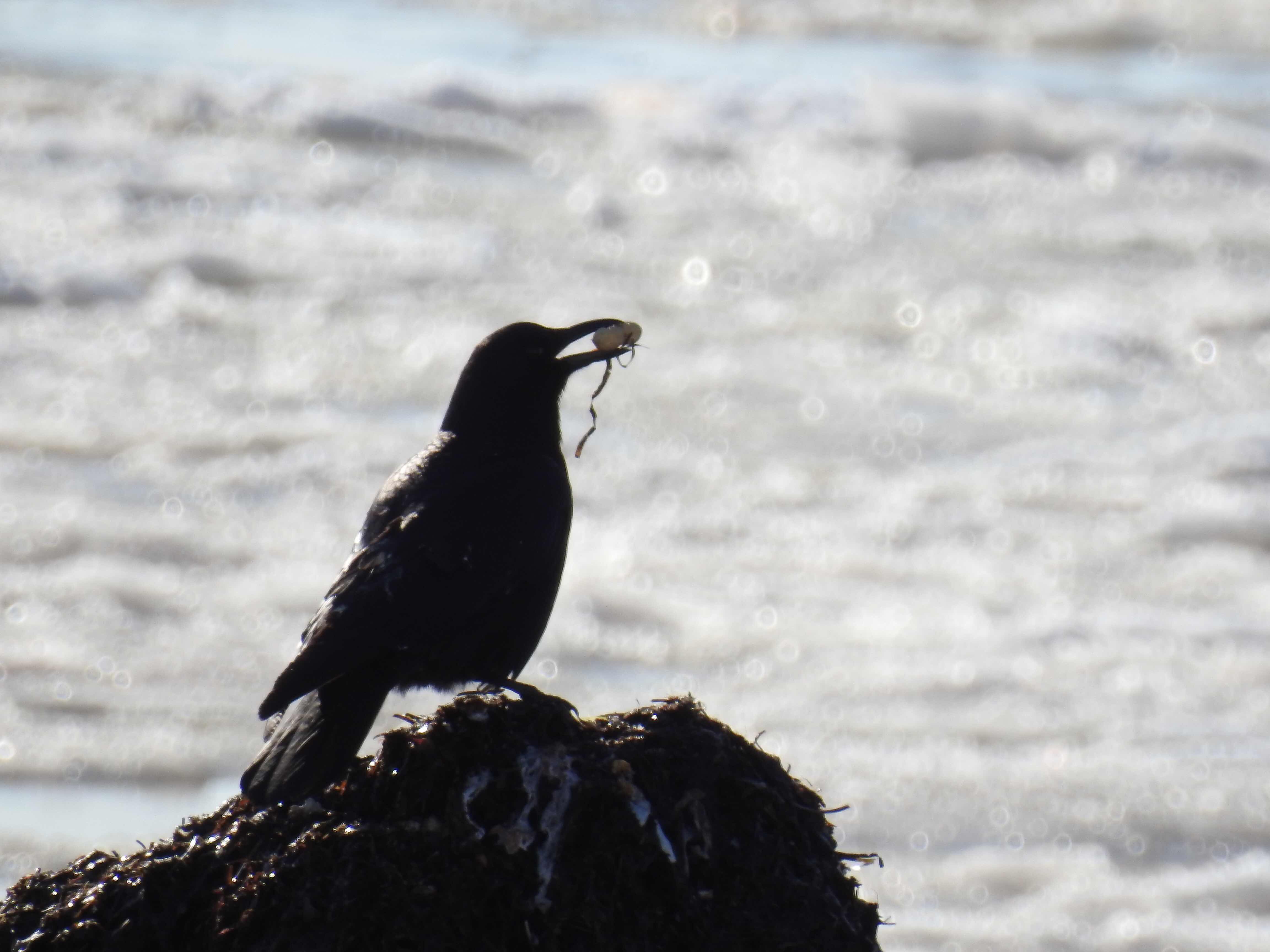 The crows watched them with interest and commented as people walked by. The people noticed them and remarked about them too.

“The crows are alarmed about this early winter,” was the common sentiment.

They aren’t the only ones! 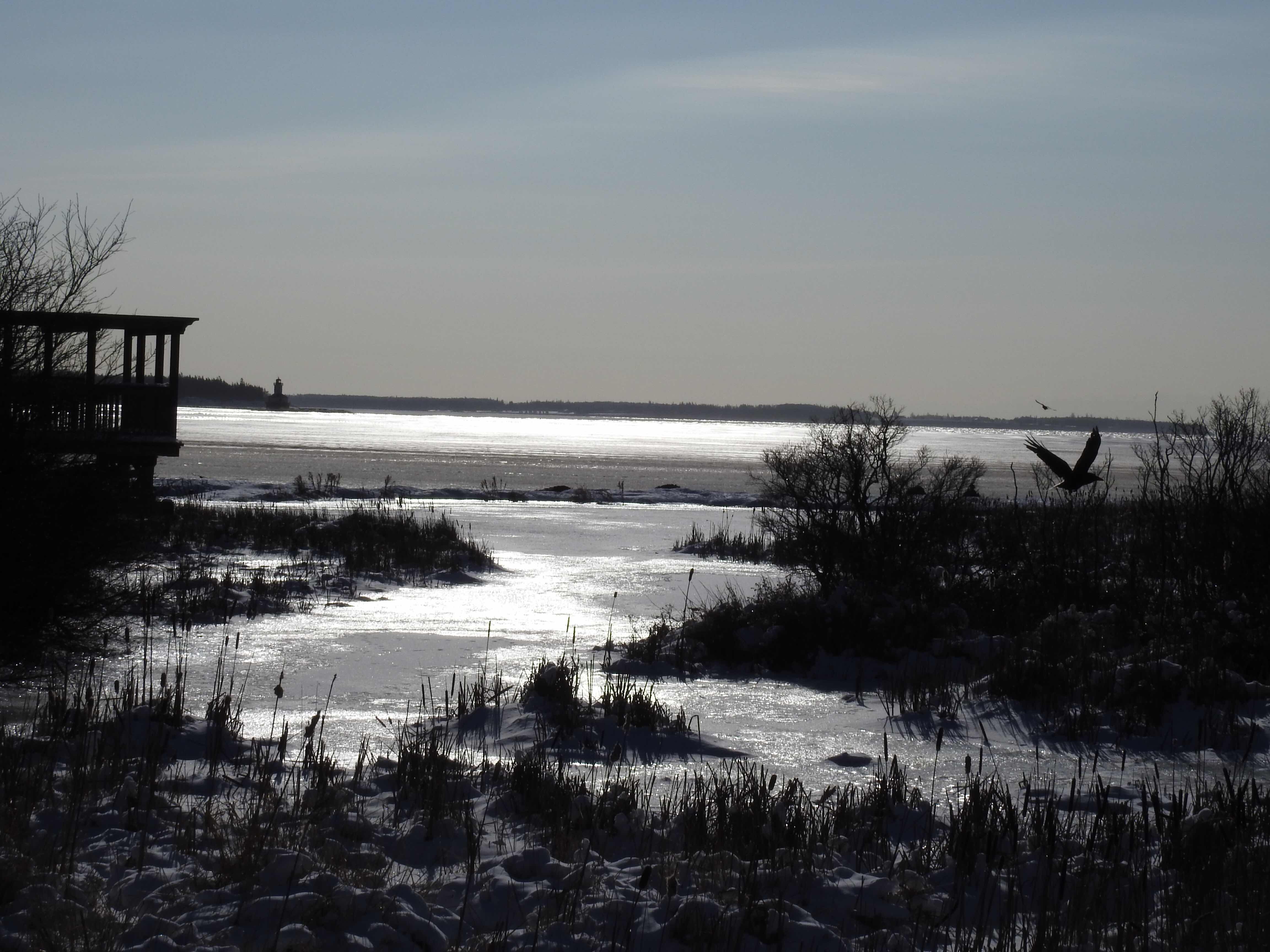 Hello, I often wonder what the wildlife think about the weather. I am sure they are affected by the cold and ice. Neat series on the crows. Happy Wednesday, enjoy your day!

It sure does look cold there. And we are complaining about our much more mild temperatures! Love your crow pictures. :-)

Gosh that is a lot of crows. There are a few who live near me and they can be so noisy! But not as many as you have there.

beautiful captures...they look "pretty" in the white birch tree!! it sure does look cold in your pictures!!

The crows know. THE CROWS KNOW!

They really do sound as if they are having a conversation. I have a pair that have taken a liking to my birdbath.. they wake me up every morning with their conversation, sometimes it sounds like they're having more of an argument than a chat 😊

I have a huge weakness for crows. Intelligent, family minded bird. And loved walking with you. Thank you.

There are lots of crows nearby when I go out walking but I never get any photos, they move away far too quickly. Roll on spring 😊 Take care Diane

A crow rebellion, their mantra, "where are the treats, we want treats". :)

It is such a dangerous time for all of the outside animals. I tend to worry about dogs and cats left out but there is a whole slew of animals in the wild that must find safety in bad weather.

What a fun collection. Crows are interesting to try to photograph. They are very smart.

such fabulous photos! I love the bridge ones the most! Nothing like old, rustic wood to bring a smile to my face!

I like the photo of them all in that photogenic tree.

We sometimes have a roost of Rooks and Jackdaws near here - I say "sometimes" because although they have favourite roosts they move around between different sites in what seems a random manner - I love to here their chatter as they settle down for the night.

You have a nice fresh snow! We have ravens here....they help rid of all the road-kill! Andrea

Great shots, Marie. I'm glad people brought along the usual fare for the crows after the snowfall. It's hard for nature's children to find food in rough weather.

Ohh you have shared a fresh snow and those birds. I think I have not seen such view in my life.
You have a new winter header too!
Here we still have a warm winter.

Happy weekend to you!

I always wonder what an early winter means, Marie...even though last year we had our only snow of the season the first week of December and then it was gone. This year may be different? A murder of crows. If no humans are there to feed them, I suppose they figure it out for themselves???

Those are birds I am not very fond of.
So much snow already...

I love crows. My crow quilt is at a standstill, but I shall start on the small details after the holidays. Love your crows too.