There were few walkers along the boardwalk. It was after 3 p.m. and many of the regulars to the area had been there already. The sun was headed to the horizon in the next hour. 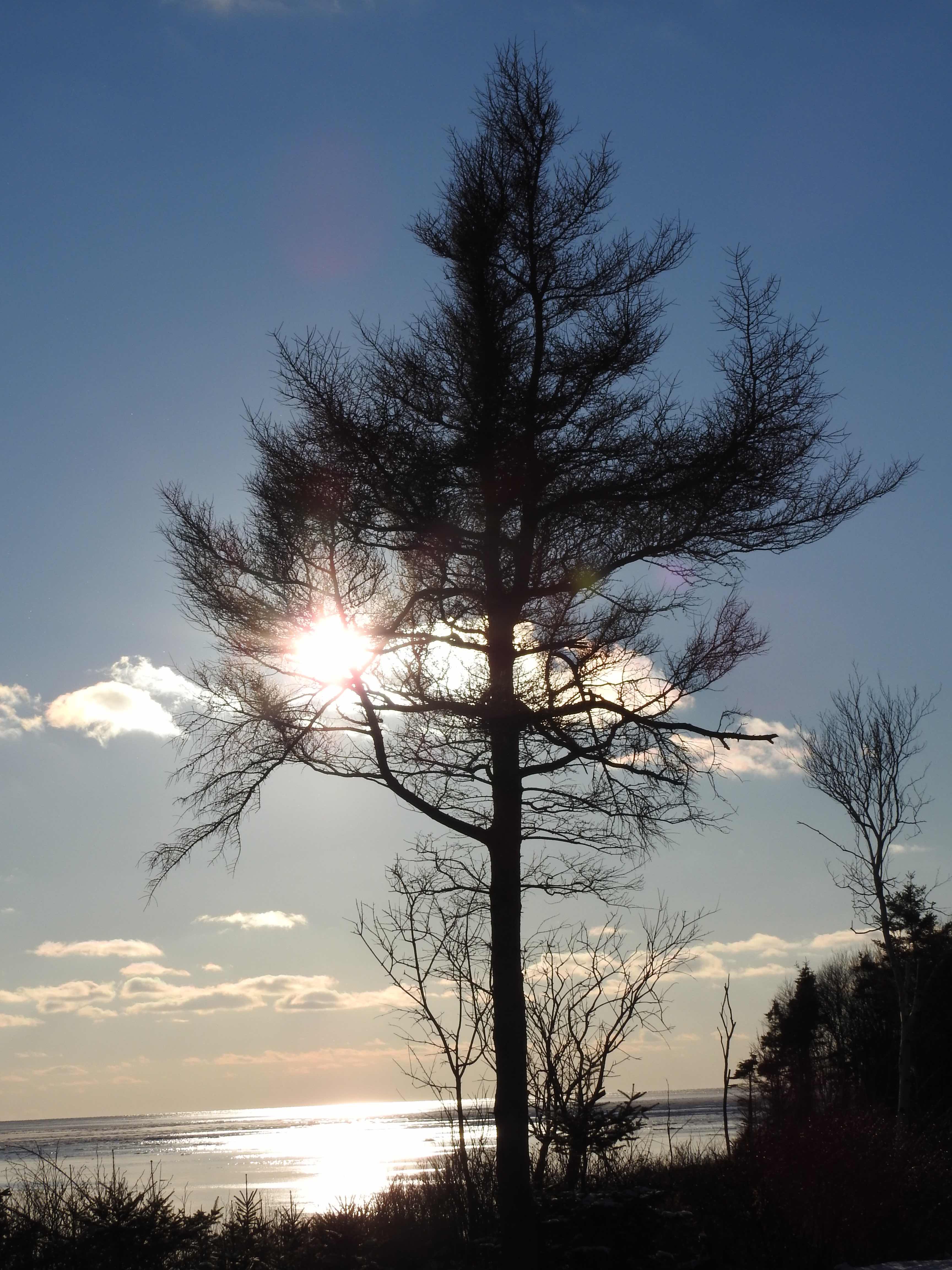 I was alone as I did the usual trek in silence, except for the sounds of the birds. They were busy feeding on the seeds and peanuts left by the earlier walkers and chatting amongst themselves. Even a woodpecker made an appearance. 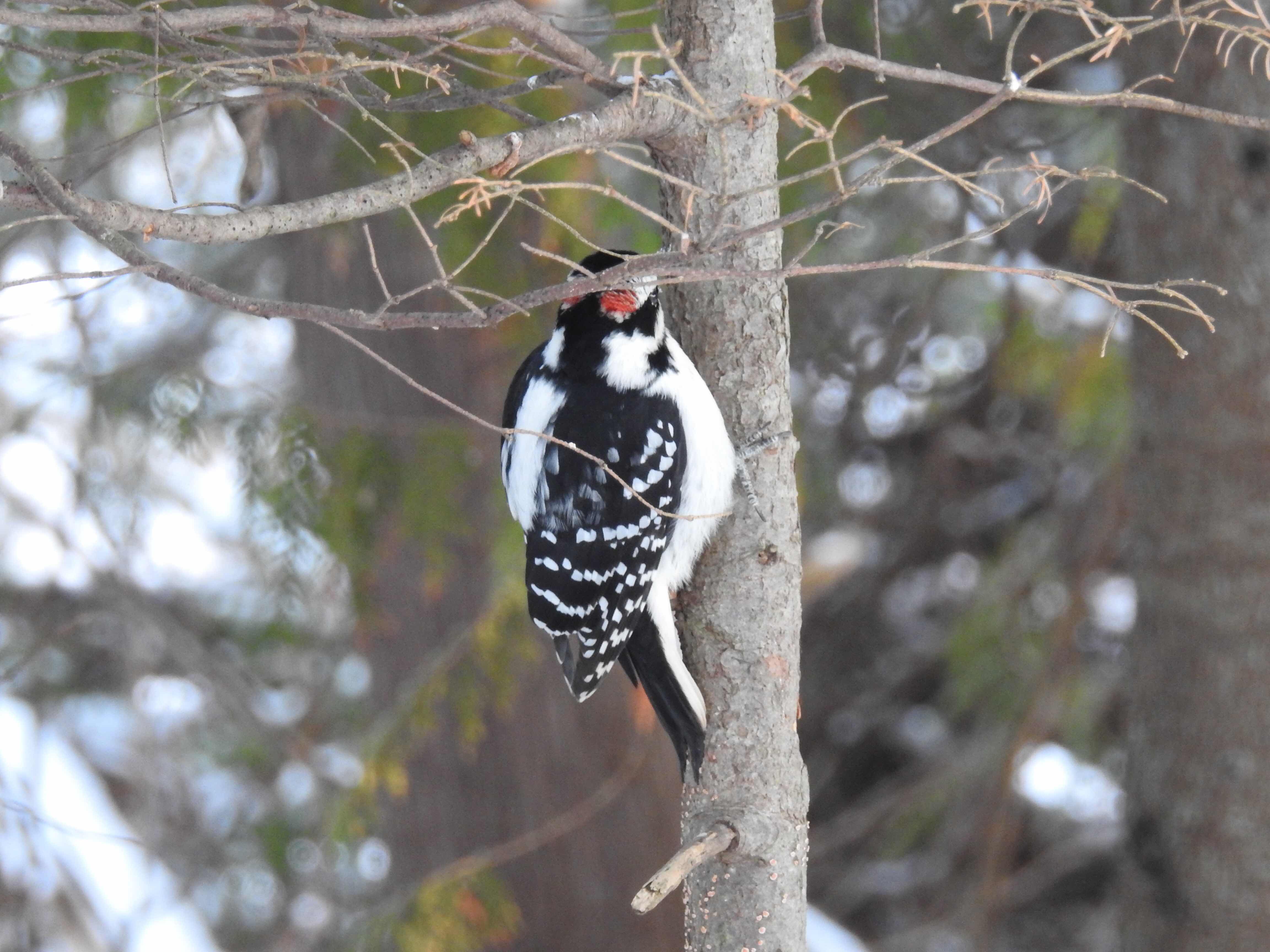 I had forgotten to take the seeds from the car. The birds didn’t know that. The blue jays were in the trees around the bridge, some puffed up, warming the captured air around their bodies. 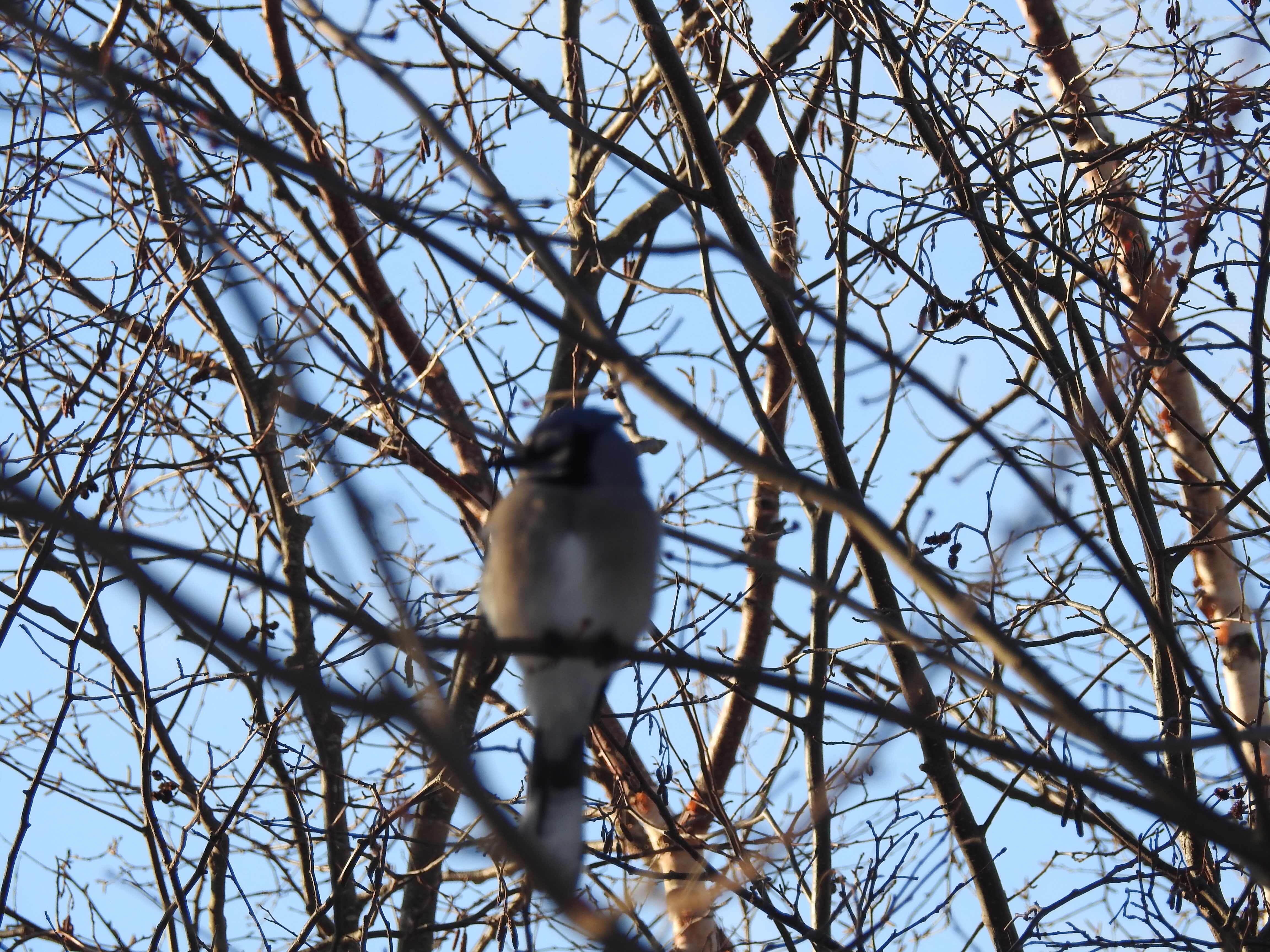 They watched every move I made, ready to swoop by if more food appeared.

At least eight chickadees came around as I stopped on the bridge to look for muskrats in the water below. These Black-capped chickadees hopped along the railing, approaching as I stood there. I reached into my pockets for a tissue and the tiny birds took flight around me. I could hear the vibrations of their wings as they circled. They expected sunflower seeds. It was impossible to take photos of the swarm however. I held up my empty hands and off they flew. I captured a photo when one landed. 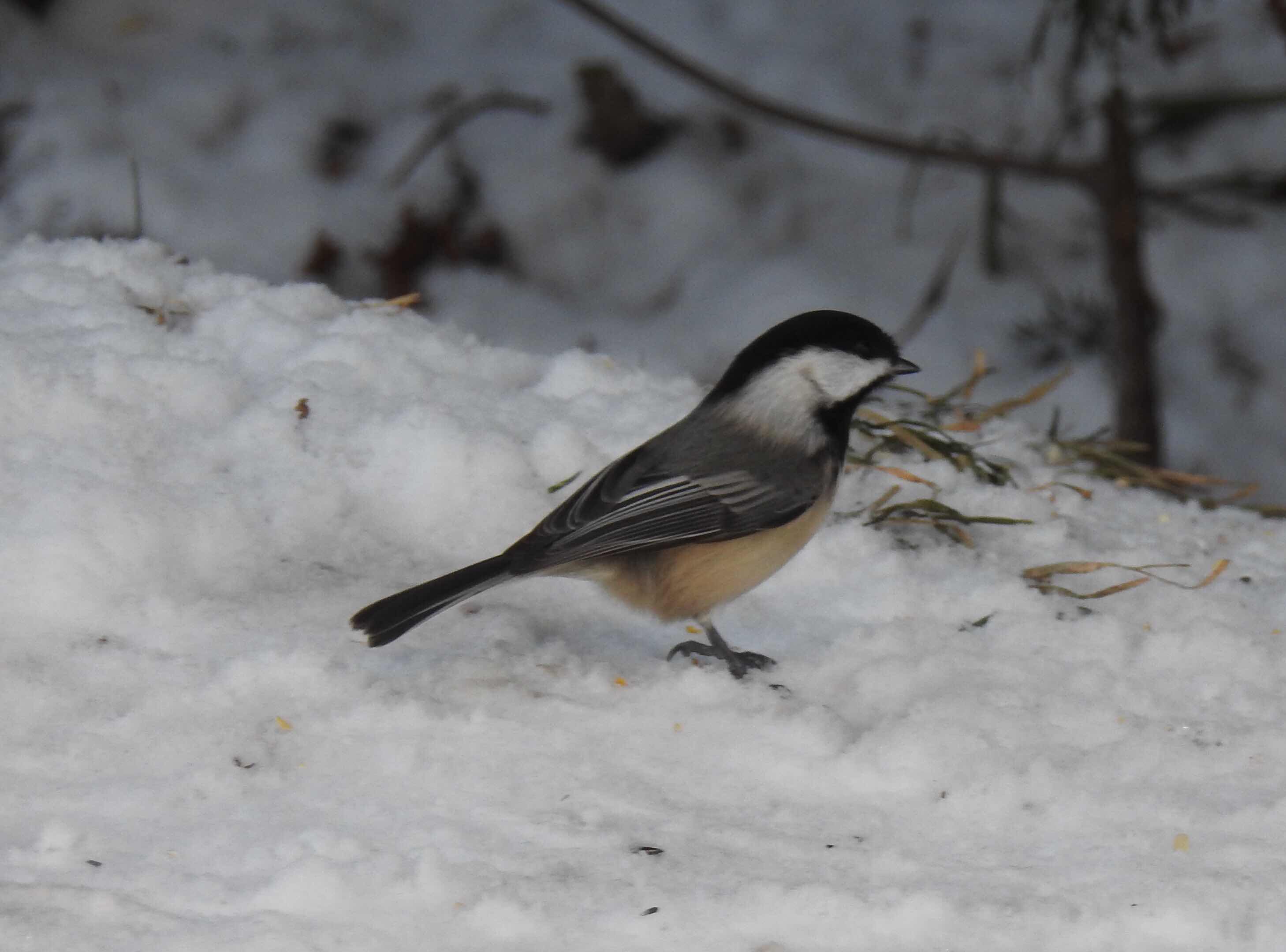 Someone had attached a new feeder to the bridge railing, replacing a feeder destroyed by the recent storms. A young squirrel was busy eating seeds in the house-like structure, but he paused long enough to see if I had any peanuts to offer. His presence kept the chickadees away from the feeder. 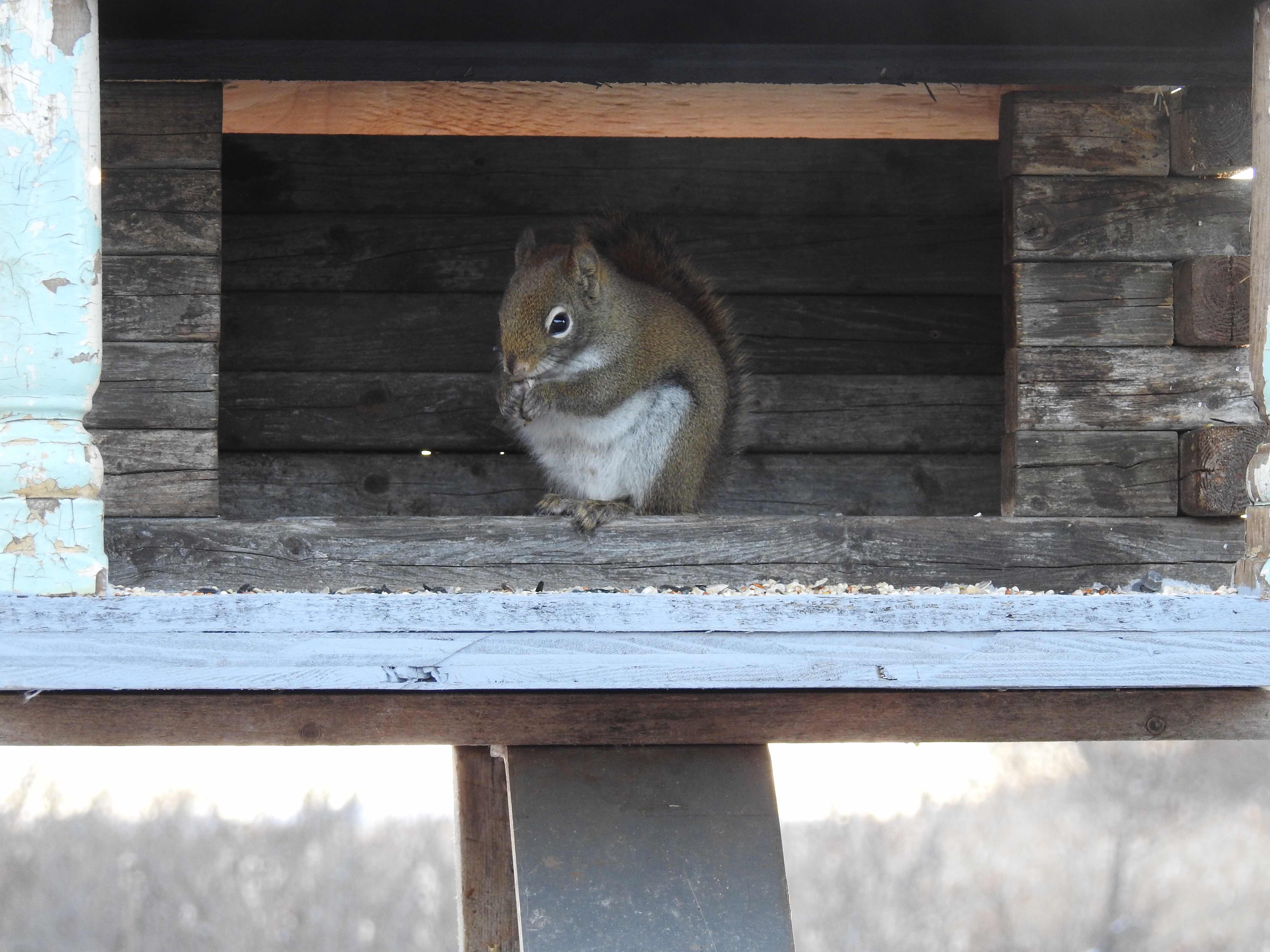 I stood on the gazebo to take in the scene. It was too cold to wait for the magical moments of sunset. Another day! 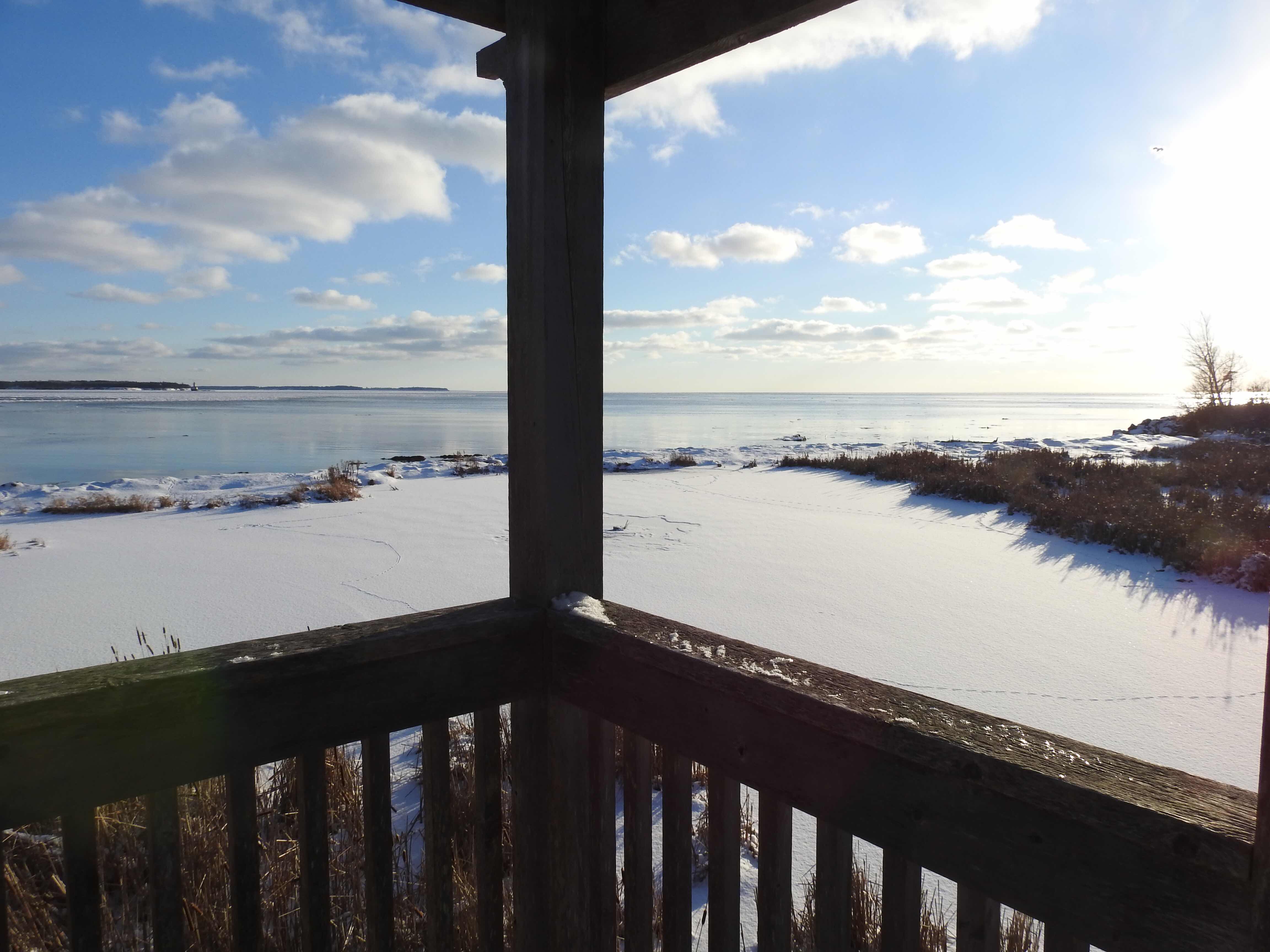 It does look cold, but clear and delightful. Thanks for the great shots, Marie. :-)

I like chickadees. So impertinent, and in your face, or in your pocket, as the case may be. Their personality is equaled only by hummingbirds, who, sadly, do not stand still often.

What a pretty area for a walkabout. The squirrel knows where the food's easiest to get.

Thank you so much for taking us along.
How very, very beautiful (albeit cold). I am glad to hear that the critters get fed. It must be hard to forage through snow.

What a nice walk, Marie. The birds are watching for anything that is food. The squirrel found the new dwelling to his liking especially being stocked with some seeds.

That must have been a bit disappointing for both you and the birds, but I'm sure the walk was good, and you got pictures.

You had a nice walk as usual. the woodpecker and the squirrel you captured are sweet!

Gorgeous view. Be careful out there alone. Slip and falls on icy walks and all. I'm being particularly careful these days. No ice but slippery rain.

You gave me a big smile with this post, Marie, especially when I got to the chickadees. My ex-husband often called me his "little chickadee." :)


Happy New Year, Marie. I wonder if/how your blog is working these days. I hate that you've had "challenges" with it. In the mean time, thank you for following my own blog!