It was -7C without any wind. I was eager to spend time outside after a week without a walk in nature. My husband decided to come along though he would prefer to forego the nature walks in the cold.

And it was cold, the damp cold that cuts to the bones. We drove around to some of our favourite haunts but unplowed side roads 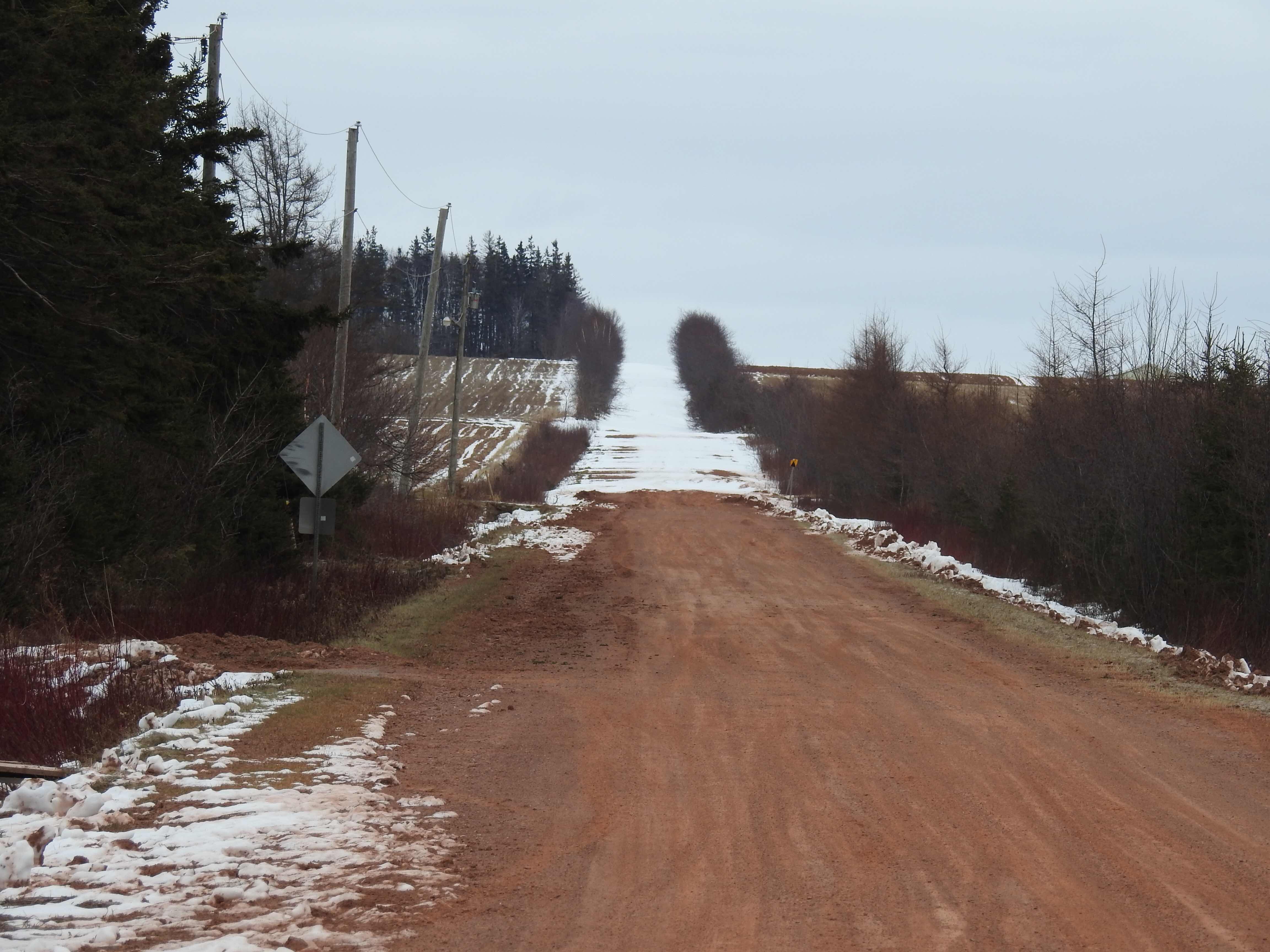 prevented access so we headed to Chelton. We knew one of the roads there would be plowed.

Chelton Beach lies along the Northumberland Strait on the south coast of Prince Edward Island, in the shadow of the Confederation Bridge. We have visited there before in the off-season, when the cottagers are long gone back to their winter lives. The location is the draw for us, a place you’d find by accident if you make the wrong turn.

Overcast heavy blue-gray skies made the bridge look like it was suspended in a gray medium. 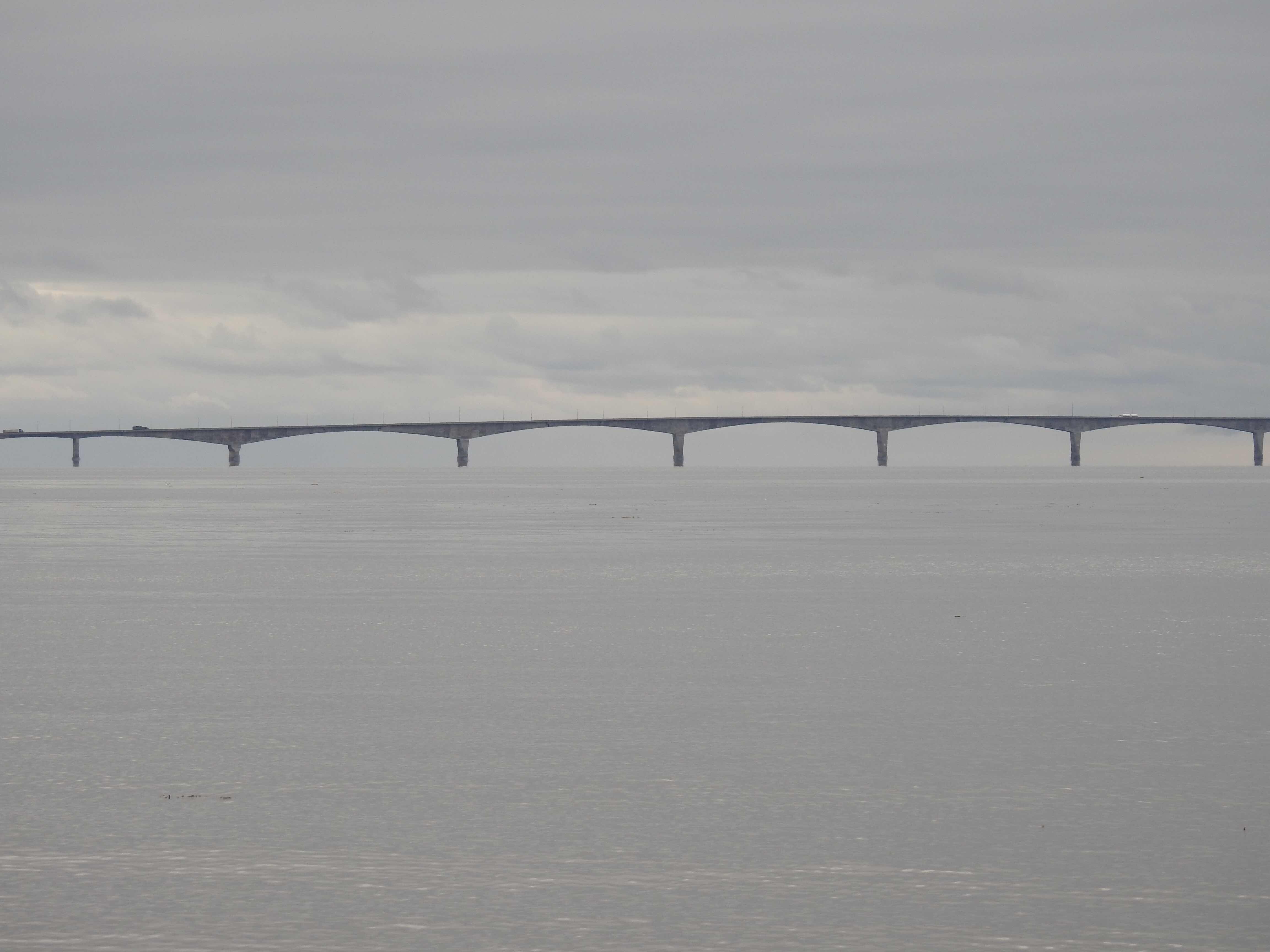 Without the sunshine, the muted light this time of year gives a twilight appearance to the late morning.

We walked the beach until we were too cold to stay any longer. As we were leaving, the sun gave a valiant effort to peek through the clouds. It illuminated the sky enough to brighten the scene and I took my favourite photo of the day. 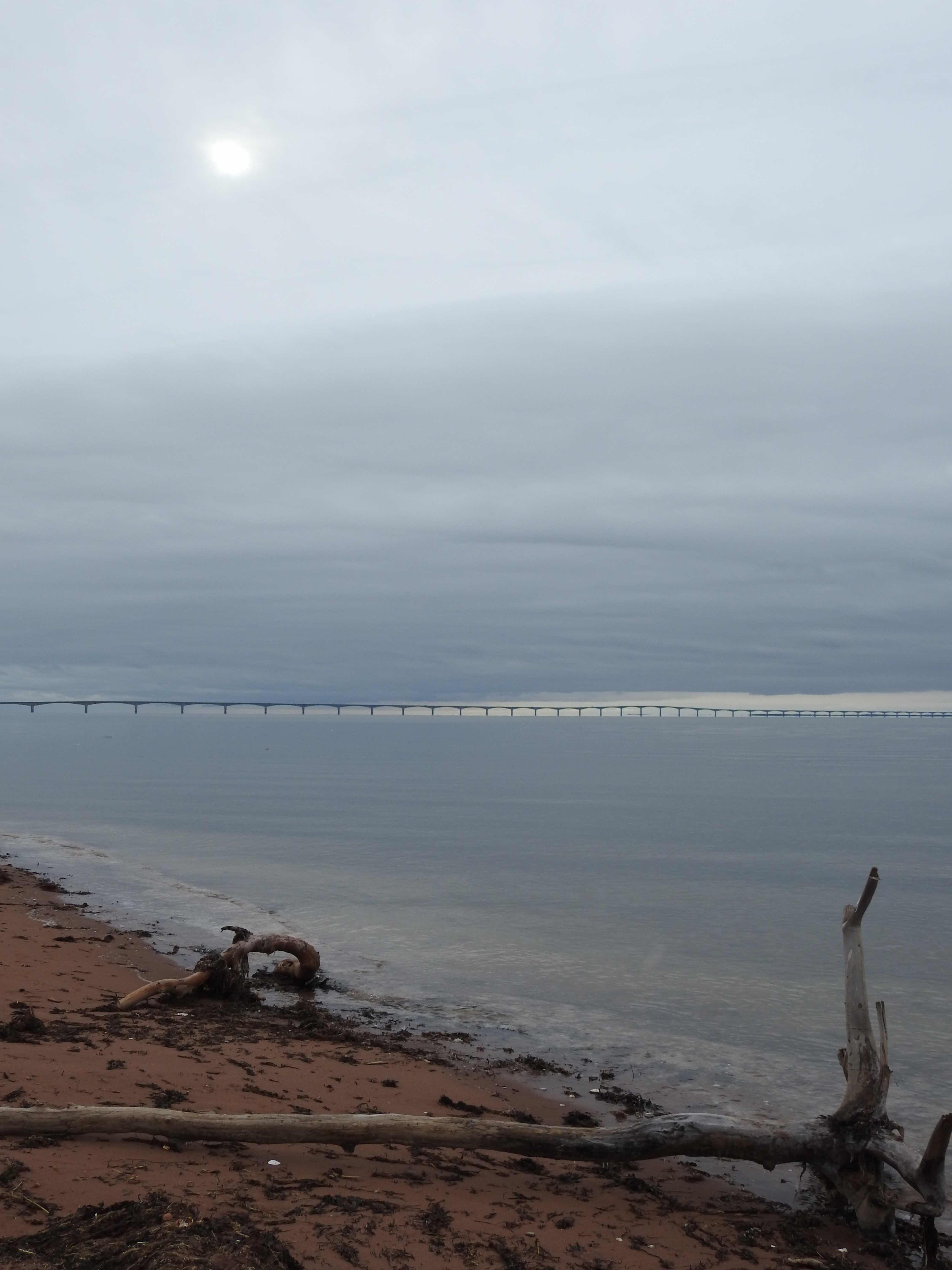 The heater in the car didn’t warm us enough and we both felt chilled all evening. It’s going to be a long winter!

Email ThisBlogThis!Share to TwitterShare to FacebookShare to Pinterest
Labels: Chelton

Hello, beautiful scenic views and photos. The last scene and photo is my favorite. Enjoy your day and have a great new week!

You are so much braver than I am!!! Keep warm Diane

Hi Marie: That LOOOONG bridge would scare me even if the sun were out … but how eerie it was in your picture. You and your husband are brave souls to get out in that weather !

Those are amazing pictures. I can see why you love that one so much. And that is cold and uncomfortable weather, for sure. It is going to be a long winter. Our cold has retreated for the moment and feels balmy in comparison. :-)

Ohh such beautiful photos!! You are brave to go for walks in such cold weather! We are -6 this am here in N.D. Keep warm!

Oh no, the dreaded Damp Cold! Thank goodness we don't get that here on the prairies. It may be colder than hell, but it's a Dry Cold!

It seems almost unbelievable to me that you went walking in -7 degree weather Marie, I can't even imagine that kind of cold! You got gorgeous shots as a reward ✨

The bridge views are stunning!

you are SUCH a trooper! And well rewarded, I might add. :)

Marie, Marie, Marie--you are a wonder woman to venture on our behalf. I side with your husband. I hate cold.

Amazingly beautiful photos.
We do get a few -7 days, but they are usually bright and sunny. Which makes a big difference.
Thank you and your husband for suffering the damp cold and giving us the magic.

Beautiful scenery, I really enjoy the look of the bridge, it's very impressive.

Oh....My....Gosh. That is incredibly cold. I can't imagine being out in that weather but then again don't have the kind of apparel that might make it bearable. I get the opposite down here. It is so hot for so long and I don't want to leave the house but finally can't stand it and have to move my body.

Such a goregeous view. I would definitely want my quilted underwear and outwear but to be honest I probably wouldn't be out there.

This is great. I love walking and exploring in the cold of winter. I don't get to do it often anymore because I have trouble navigating mildly deep snow because of my messed up back.

I know. I can seldom be motivated to poke my head out the door to take photos. Yes, it's going to be a long one.

Cold for sure - the pictures showed that as well - but oh so beautiful. You are so lucky to live in a beautiful place when you can walk and enjoy the beauty of nature in all its seasons.

What gorgeous shots, Marie. This winter is shaping up to be raw and snowy, I think. Or maybe I'm just minding the cold more the older I get! Take care on your walks.

I can understand your need for a nice walk, but so nice to come home to a warm house!

I know that it looks cold - but I really do like that grey winter light.

PS: commenting now seems to be working properly - but only from my lap top!

That is COLD, Marie. Often we say here in the Netherlands that it's a "water cold" temp that cuts to the bone, so I know what you mean, even though our temps don't get as cold as yours. Right now we're hovering above freezing, which is actually colder than it usually has been during my past winters here. But look at you, braving the temps, regardless, to get your nature "fix." BRAVO to you you both. And I, too, really like that last image!

the last picture is gorgeous!! it is indeed, going to be a long winter for you!!

Beautiful and quiet winter scenery. Especially I like the second.
Have a good weekend.