Old homesteads always catch my eye as my husband and I drive around rural Prince Edward Island. On my own on a calm sunny day this month, I stopped occasionally to take some photos of old houses.

The most interesting one this day is mere meters from the road with a view to the sea not 100 meters away. 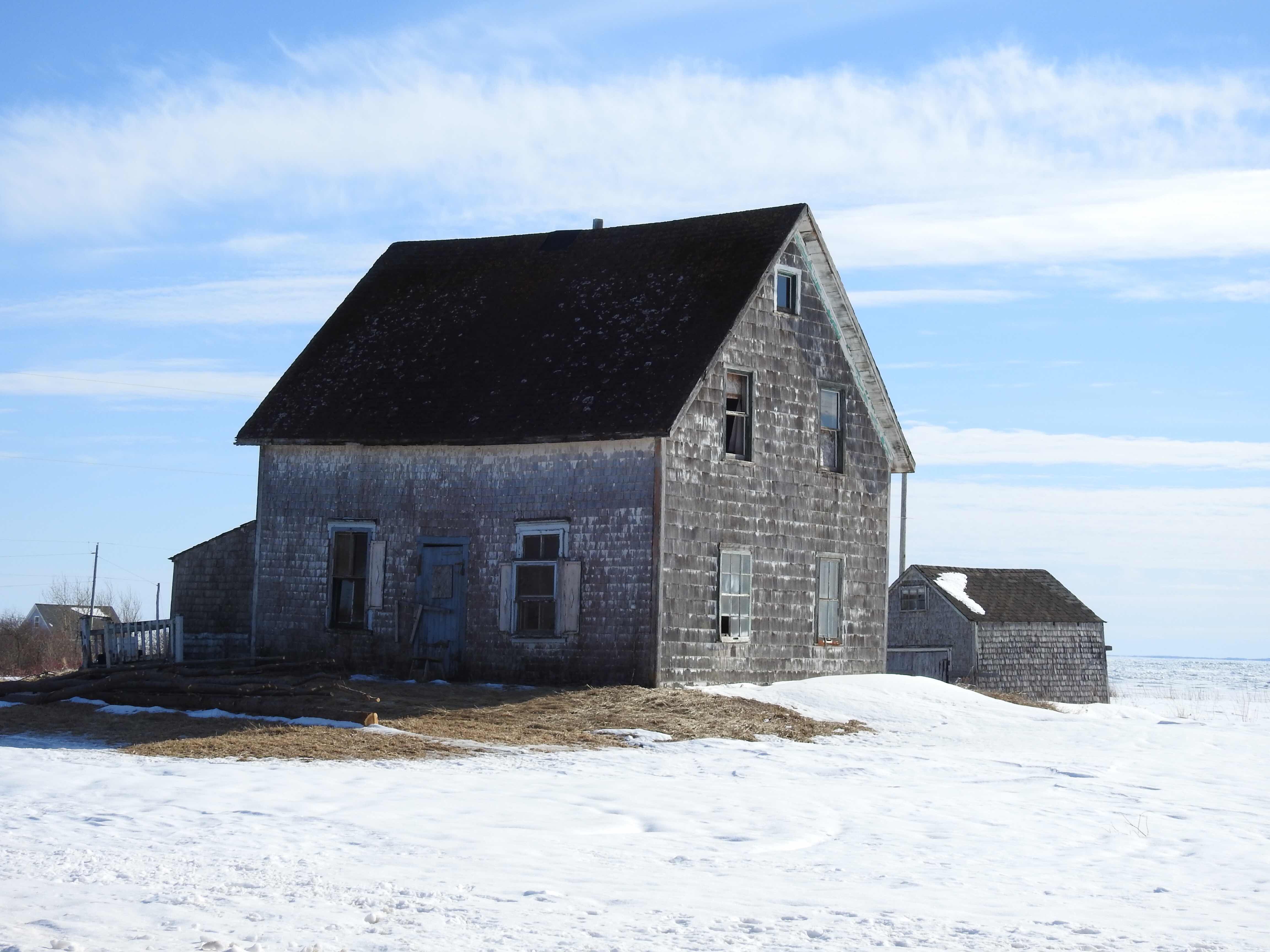 The two story single dwelling looks to have been white in its day with a blue storm door. There is a window in the attic and a shed attached on one side. Light shines into the main floor from the windows on the back of the house and is visible through the front windows. The roof is sagging and may be leaking. 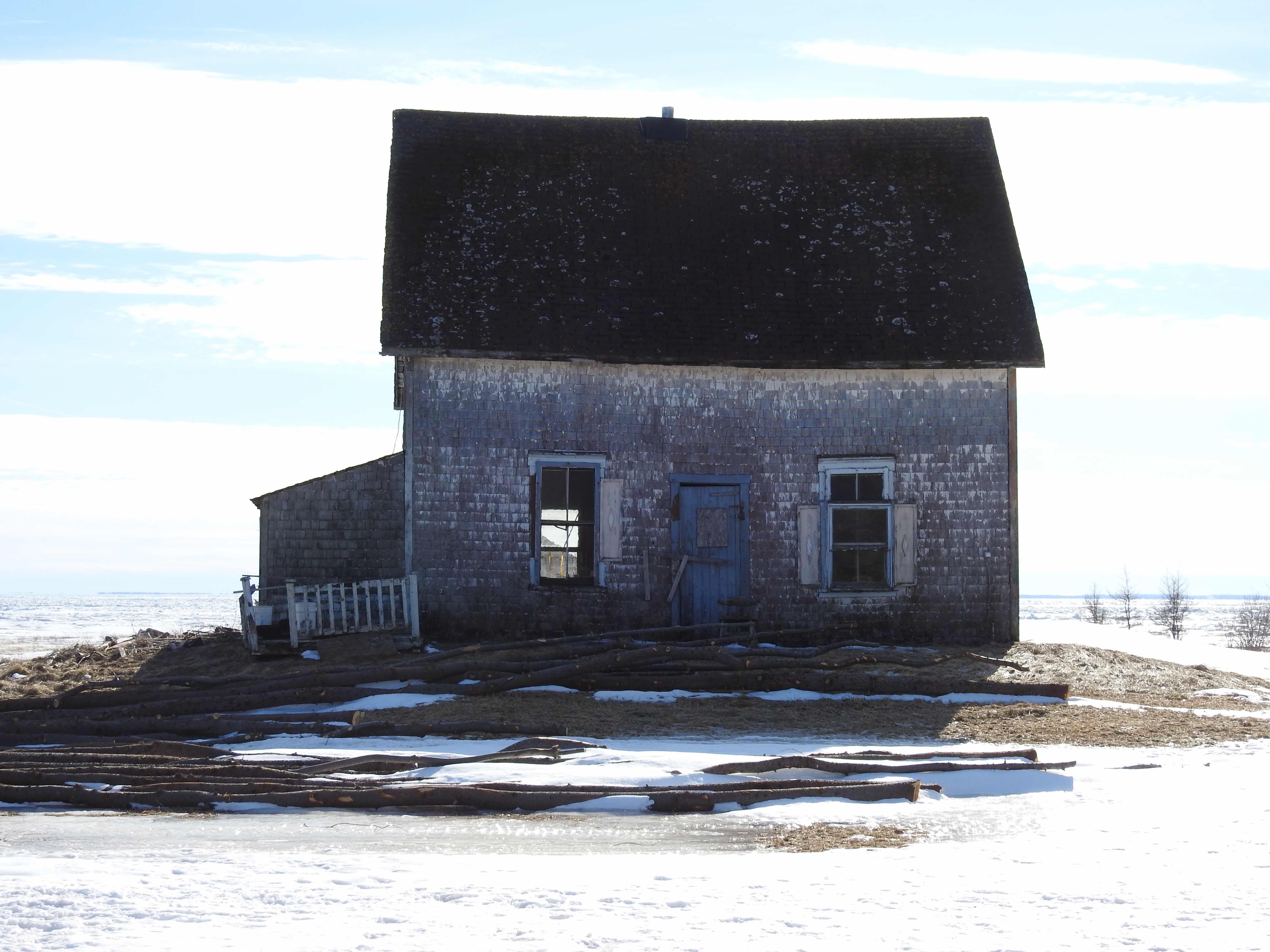 I can imagine its history. Those walls witnessed the young man bring his shy young bride into her in-laws’ home. They absorbed the cries of the woman’s pain in childbirth and delighted in a young child’s hesitant first steps.

The old house cradled his dying parents as the grandchildren played in hushed tones by the fire. The repeated lessons done at the kitchen table almost made the old walls learn the times tables too. Almost.

Then the young ones were gone, the girls married in a simple white dress which they all wore. How handsome the men looked in their best Sunday clothes. Then my imagination fails me as the scene approaches my current life story and I have questions.

Who was the last resident of this house? Is that person in care somewhere on the island or is the older generation deceased? Who owns the old place now? Are any family members left on the island? What will become of the old place?

Once this house stood proud against the elements as children were conceived, born, raised and death took some family members. Time and the elements can be cruel to the old homes which wrapped their walls around the tears, pain, love and joy of a family.

Love the old house. It's location looks beautiful, maybe too close to the water? I am sure the house has many stories to tell. Wishing you a happy day!

Yes, old homes can be so evocative.

I wonder, too, what the story of that old homestead was. It's definitely been abandoned for awhile. There are outbuildings, making me wonder about livestock or maybe a place to store vegetables? I wish there were a way to find out. :-)

It makes me feel quite sad. An empty house with nothing but it’s memories.

You are such a storyteller: a gift that I lack.

A similar image inspired this haiku:

How sad the old thing is coming to an end.

I love old buildings and there is no shortage of them in France. Our own house is over 200 years old but we cannot go back any further. Take care Diane

An old house, old memories, brought to life once again by a storyteller.
Thank you, Marie.

A lovely post. I have those questions, too. The house is wonderful - it evokes the past.

This one has a lot of character.

I, too, wonder about the family or families who resided there. What a view!

Fascinating, there's a number of deserted farm/ranch houses in E Washington and Oregon. They grab my imagination and I too want to know who lived there and where they went. They almost talk to us.

The house is wonderful.I love old houses. There is always something nostalgic and, I too wonder the people that lived and worked there....
Have a good day.

By the time I got to the end of this post, Marie, I could already see a movie being made!

Great old home. Wish we had the answers to those questions. I used to wonder the same things when we drove down old country roads in Louisiana and old and sometimes leaning homesteads. I always wondered about its history.

I think you should try to find out the real story of the previous occupants.... I'm sure it would be fascinating!

Absolutely beautiful post!! I often have a sad feeling about these abandoned places. I wonder how come no one bought the property and made it beautiful again. Who lived there, what happened there and where are the relatives of the people who lived there. I bet one can write a book.

i always find them so fascinating Marie!

how sublimely your unfolded all the thoughts that come in mind instantly when i look at such old houses !

i am so impressed!