You couldn’t call it a storm. We’d had 10-15 centimetres of snow but without significant wind. Many of the conifers were snow laden. 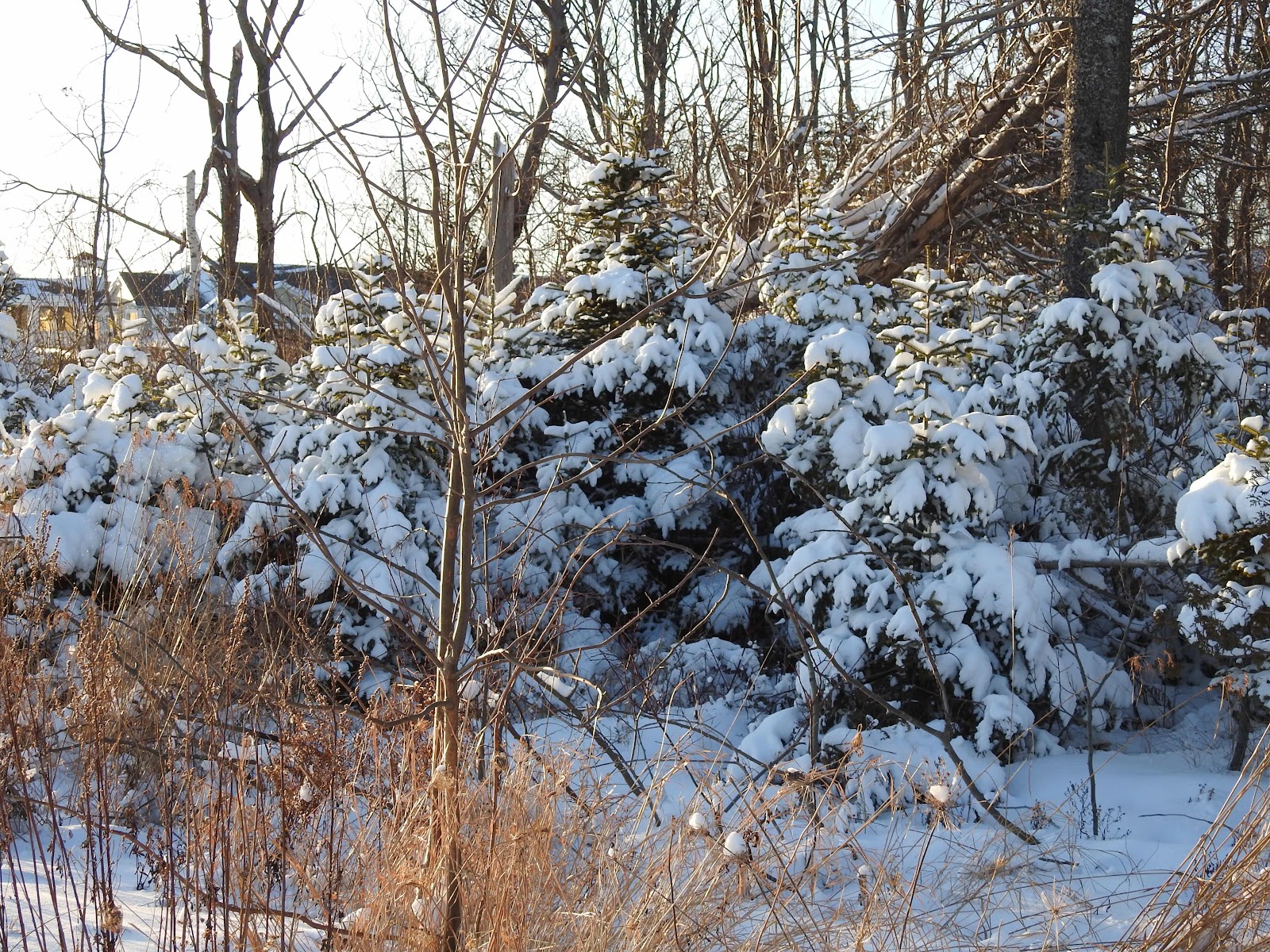 When I arrived at the boardwalk, the parking lot was empty. I felt safe in the area although I was alone so I grabbed the camera and headed to the trail for the hour during my granddaughter’s dance class. It was a great opportunity to get some fresh air after a day indoors.

It was cold but I was dressed for it. I started at the gazebo as I often did. The view out the harbour was always a great place to begin, looking out to sea in the Northumberland Strait. The sea was frozen in places but the stream and the saltwater marsh were completely frozen. An animal, possible a fox, had crossed the snow covered ice. 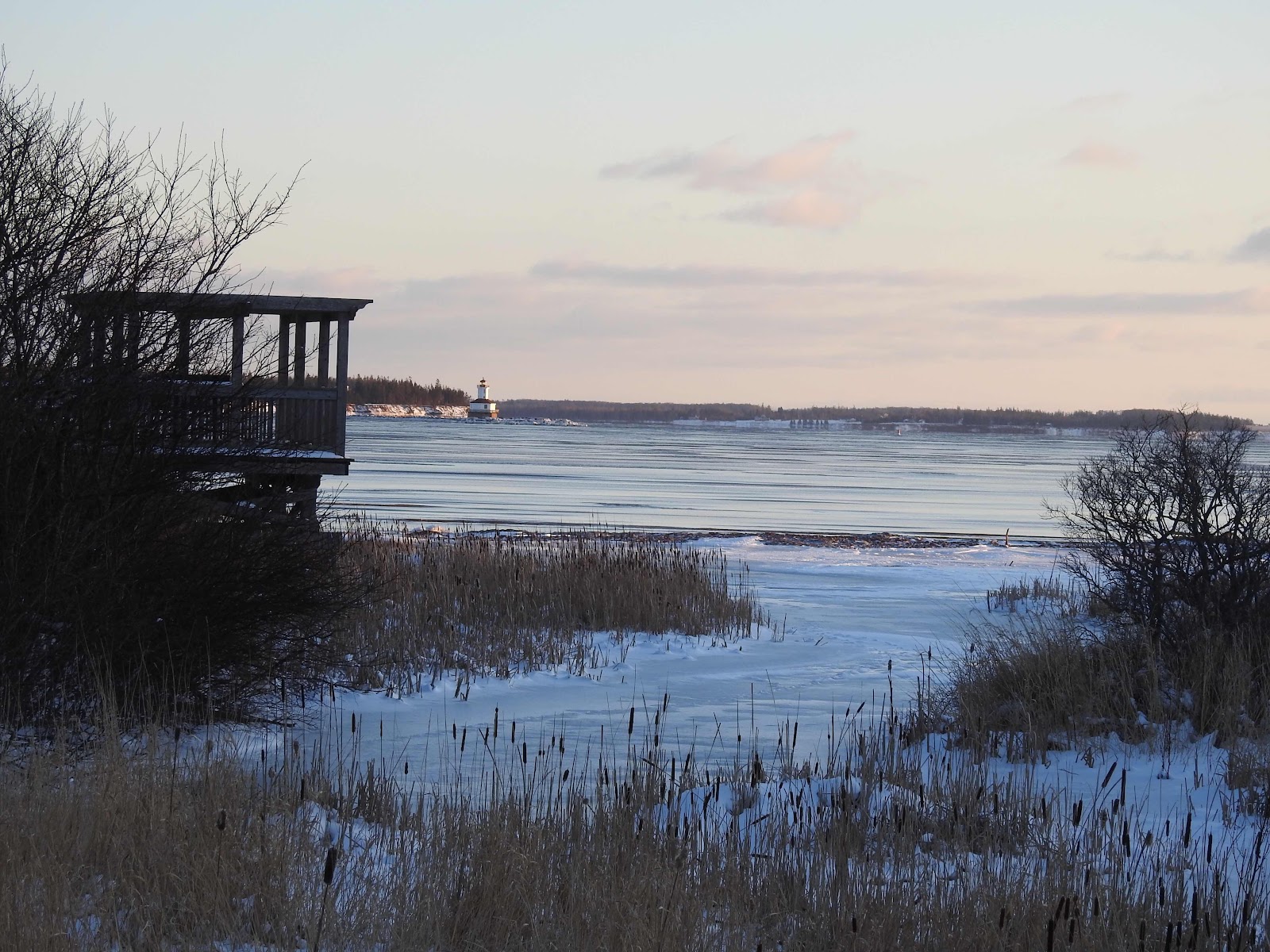 As I headed out from the gazebo, I heard a woodpecker. I followed the sound to a feeder which was new to the area and the woodpecker was busy pecking at the feeder. Then he found the suet. 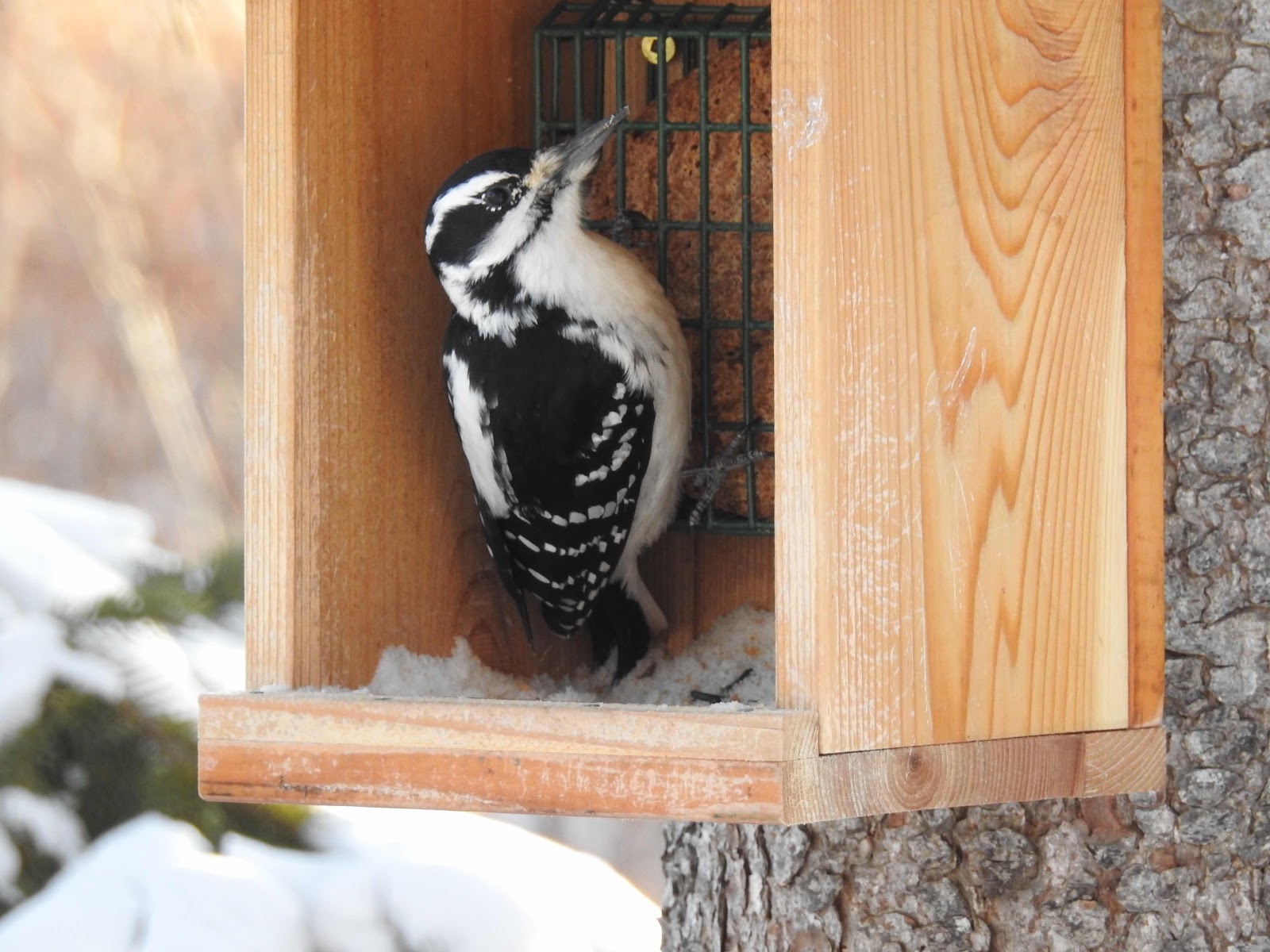 A plow clears the bike trail alongside the boardwalk in the winter and early going, among the trees, was perfect. Further along, in an open area, the snow had drifted so the walk was more of a challenge. 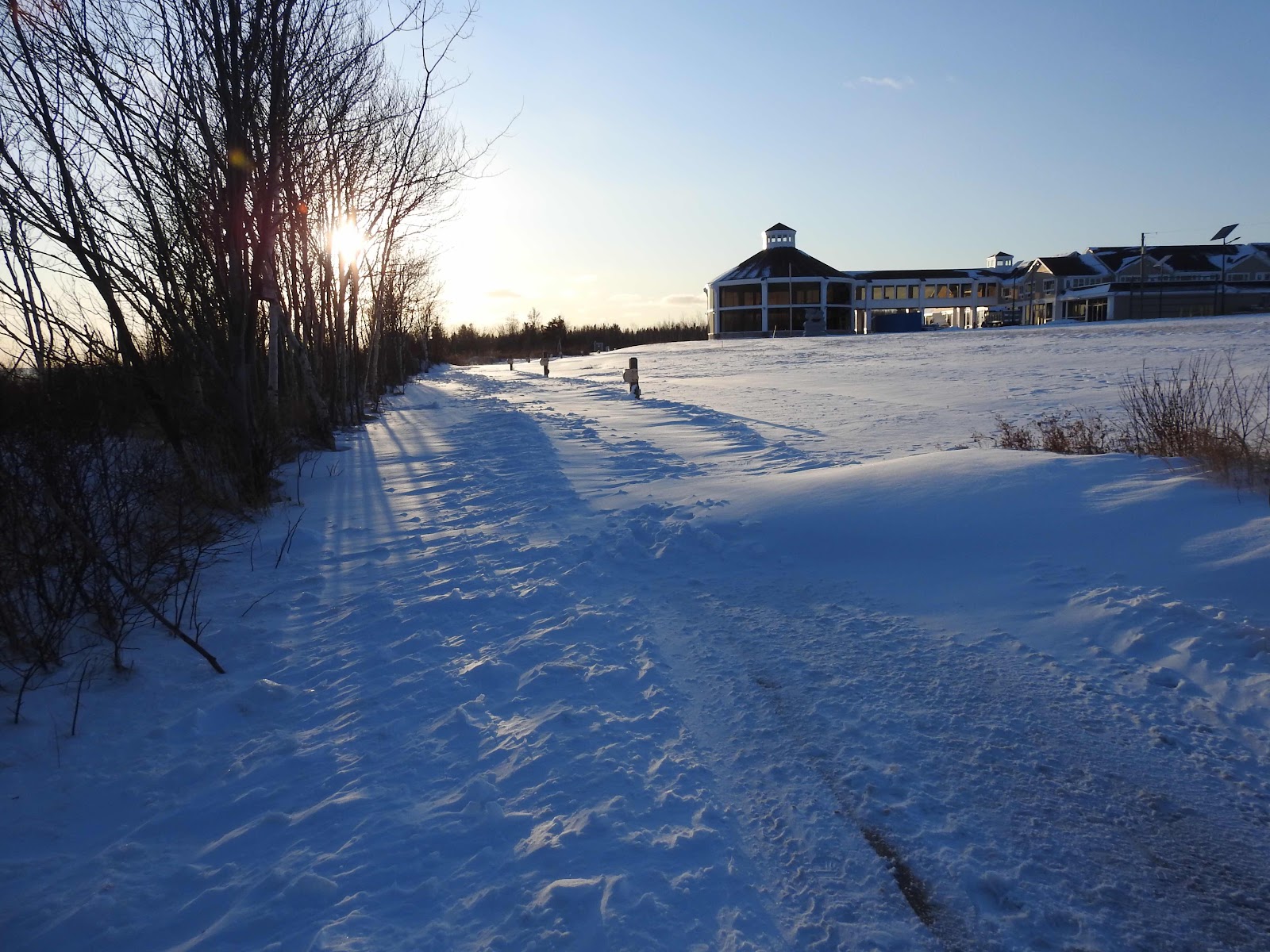 Among the trees again, the path was perfect but the bench at the end of the trail didn’t have many guests. 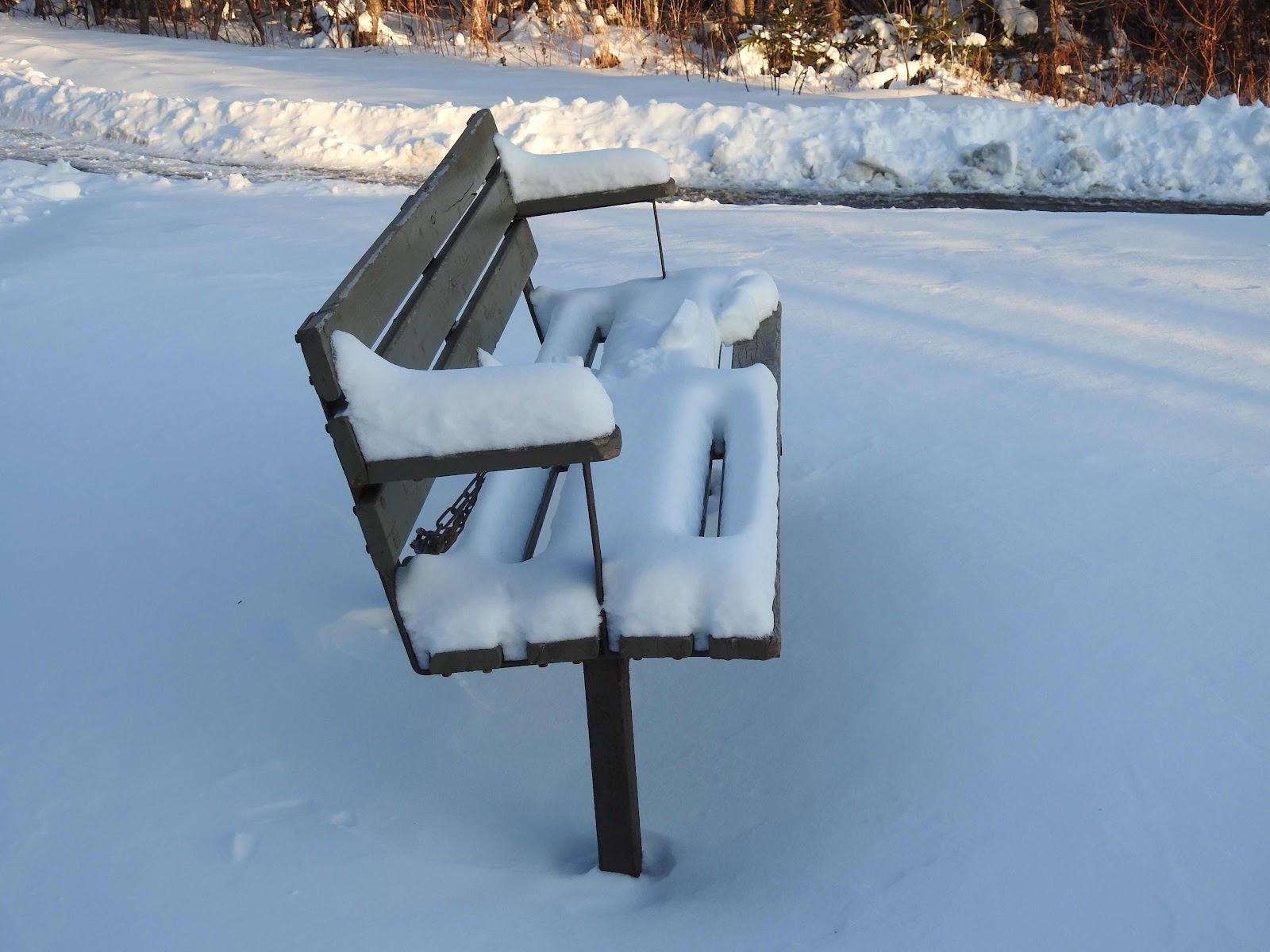 As I walked back, the trail plow/salter made its way towards the drifted areas. The trail was cleared for the evening. 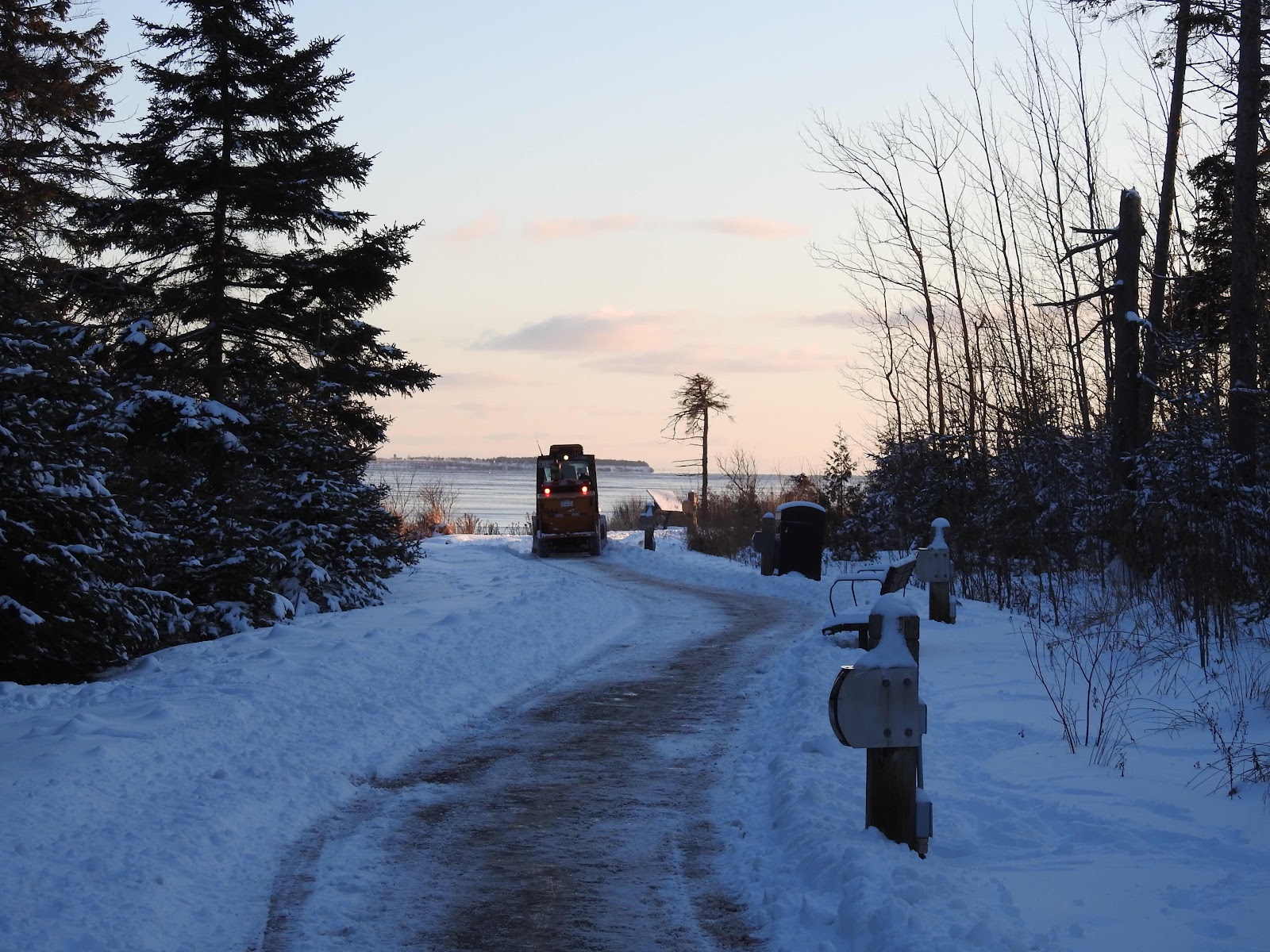 On my way to collect my granddaughter, I stopped along Water Street to take in the setting sun. It was a perfect outing. 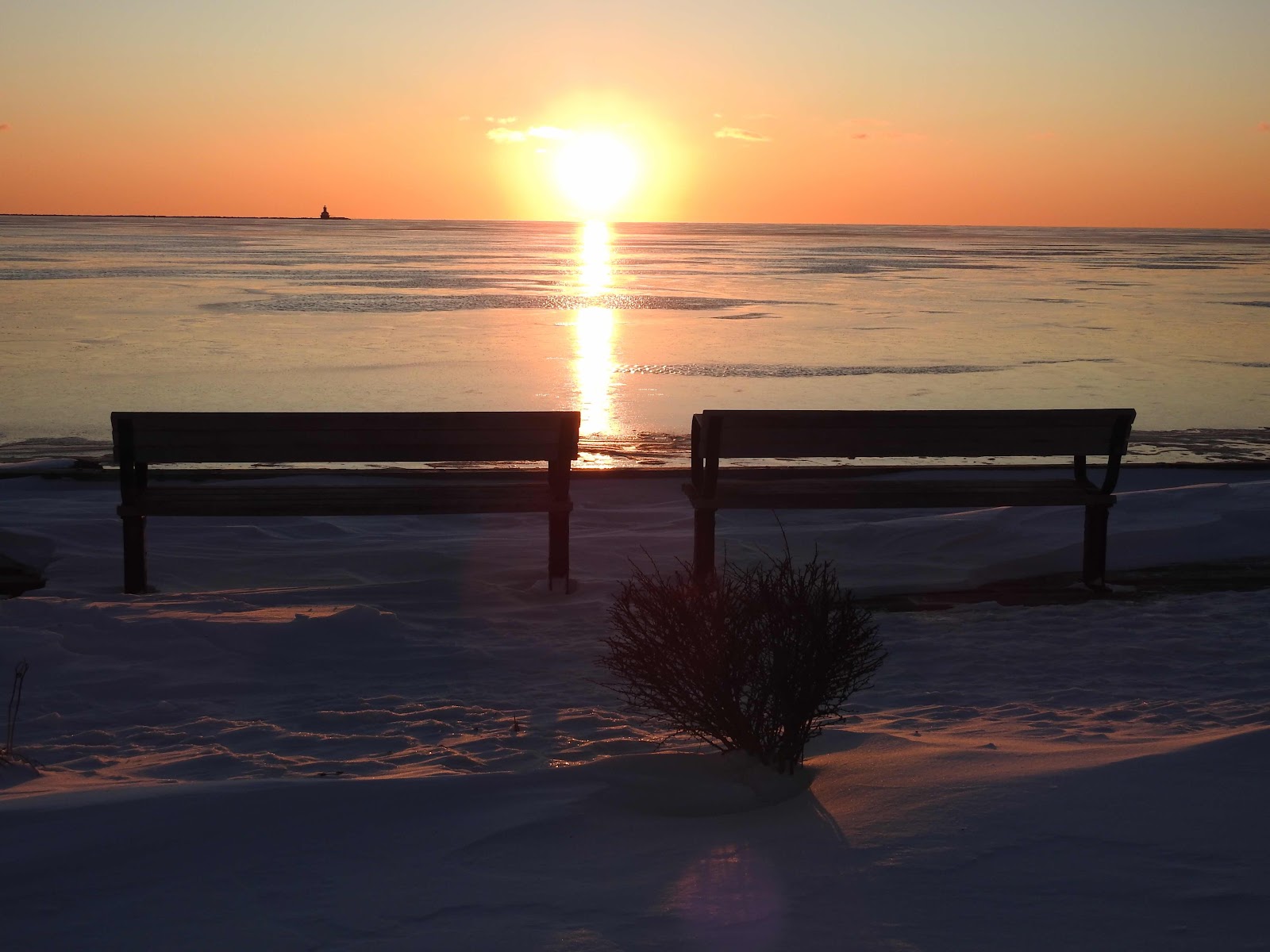 Such a lovely walk, Marie. I enjoyed every minute of it. Thank you for taking me along. :-)

the snow is so beautiful!! i LOVE the day after and how bright the snow is. the last picture is gorgeous!!

and nice that someone is keeping the suet feeder filled!! and the picture of the downy is awesome!!!

We just had our first snow about 5" but it's pretty but not like your spectacular scenery. What wonderful photos.

We have snow forecast for the overnight.

Beautiful pictures . Walking in winter can be fun, if it's not too bitterly cold.

How incredibly beautiful. Thank you so much for taking us along.

Sounds like a perfect way to spend an hour. Love your photos.

You sure put that hour to good use! And ended it with a bang. All images are lovely, though, not just the last.

Looks like a great walk, Marie. The suet feeder looks well made and is different from the ones I normally see which do not provide shelter for the bird. The only downside that I can see is that if the wind were blowing toward it, it could fill up with snow very quickly.

Looks like a cold but beautiful walk. I love the views, the distant lighthouse and the last shot of the sunset. Cute shot of the woodie.
Enjoy your day, have a great weekend ahead!

A beautiful walk in the winter wonderland. The woodpecker looks like it's making a house call. :)
Great photos, Marie.

A beautiful place to spend that hour wait. So much better than inside a store or mall. LOL.

Oh!!! It was indeed a perfect outing!
Gorgeous!!

i always be lost within your observation dear Marie

you hare so skilled to share them so intellectually