On a weekend in the middle of December when the wind was particularly high, the dredge boat, tow boat and barge which had been working in the harbour at Summerside, were tied up at the wharf. They left the next week, their work completed. 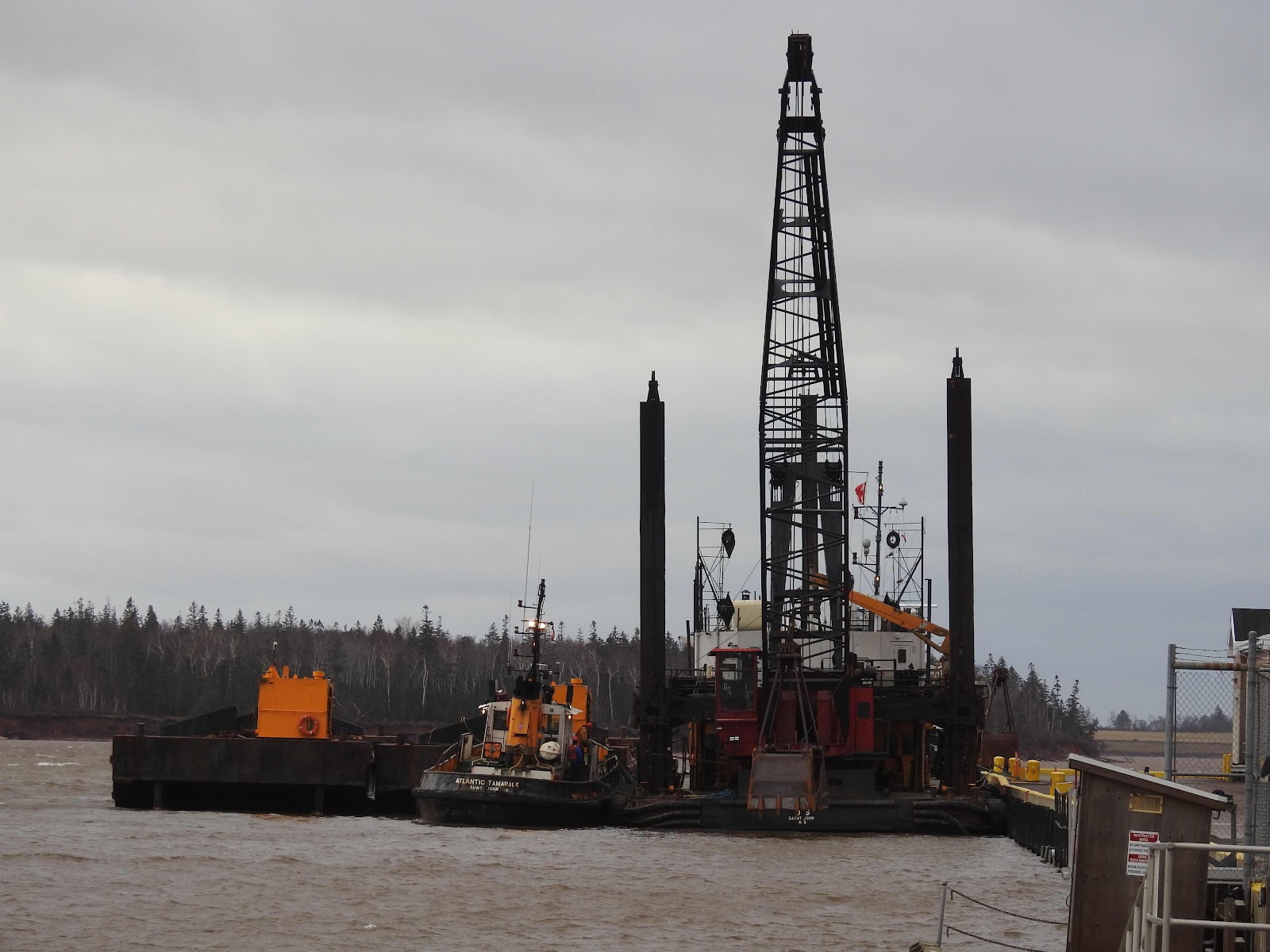 It was difficult to take photos of the vessels since they were in a secure area but I took a few photos from the shore. The tow boat, Atlantic Tamarack, was small compared to the barge and the dredger. 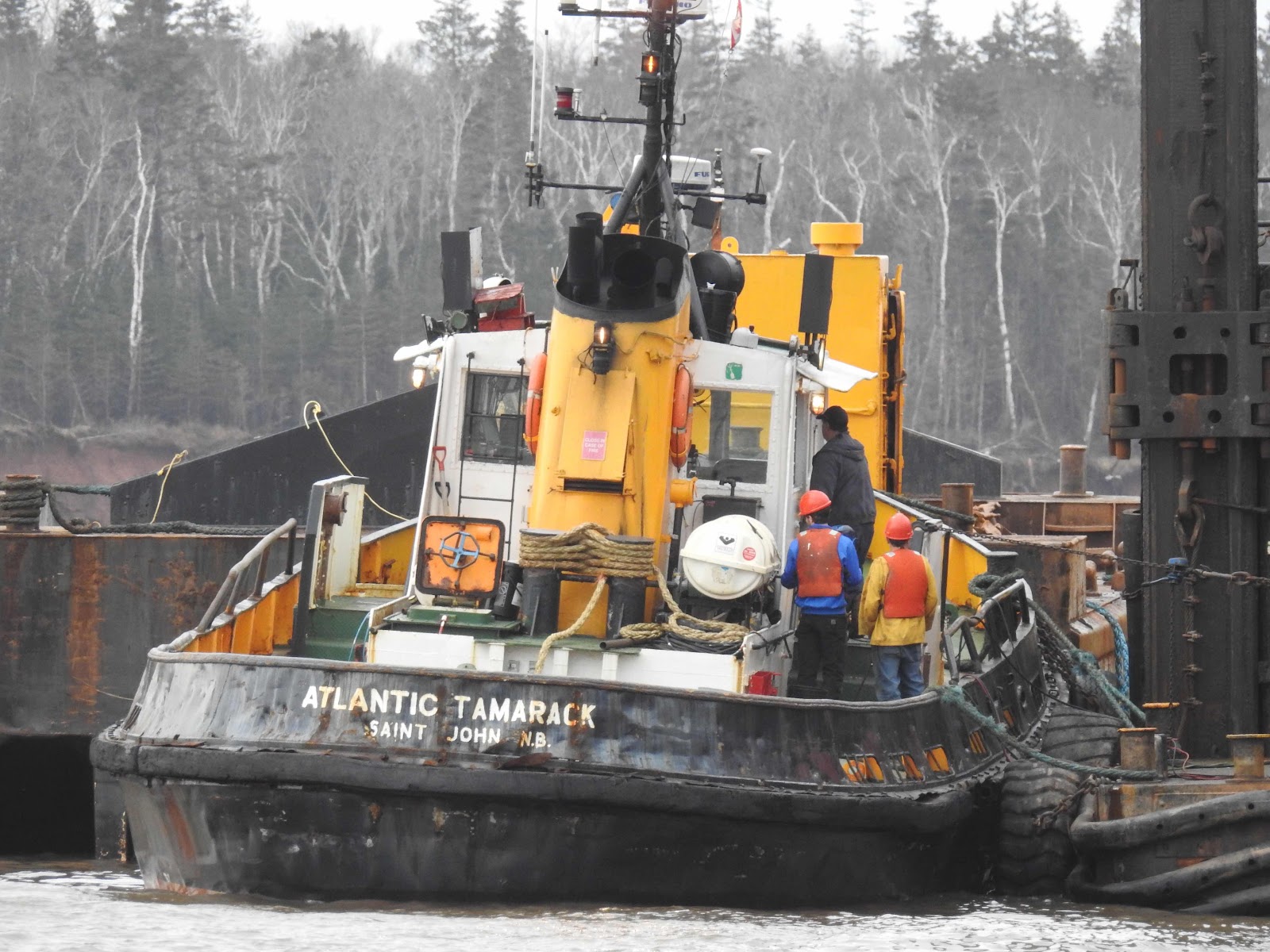 This area is home to the marina as well, which sits between a popular tourist area known as Spinnaker’s Landing and a breakwater. 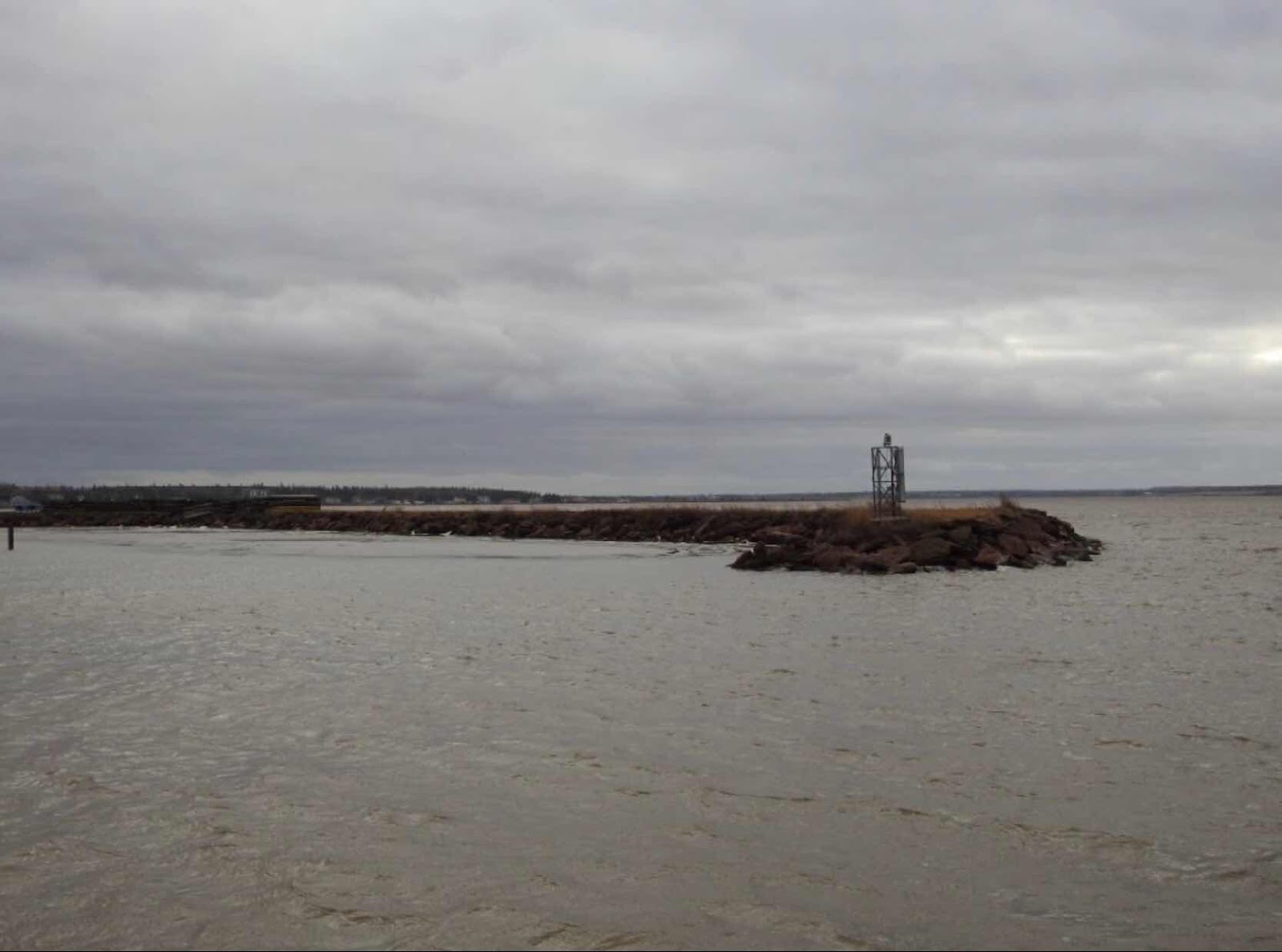 The colourful shops of Spinnaker’s Landing are always busy in the summer. 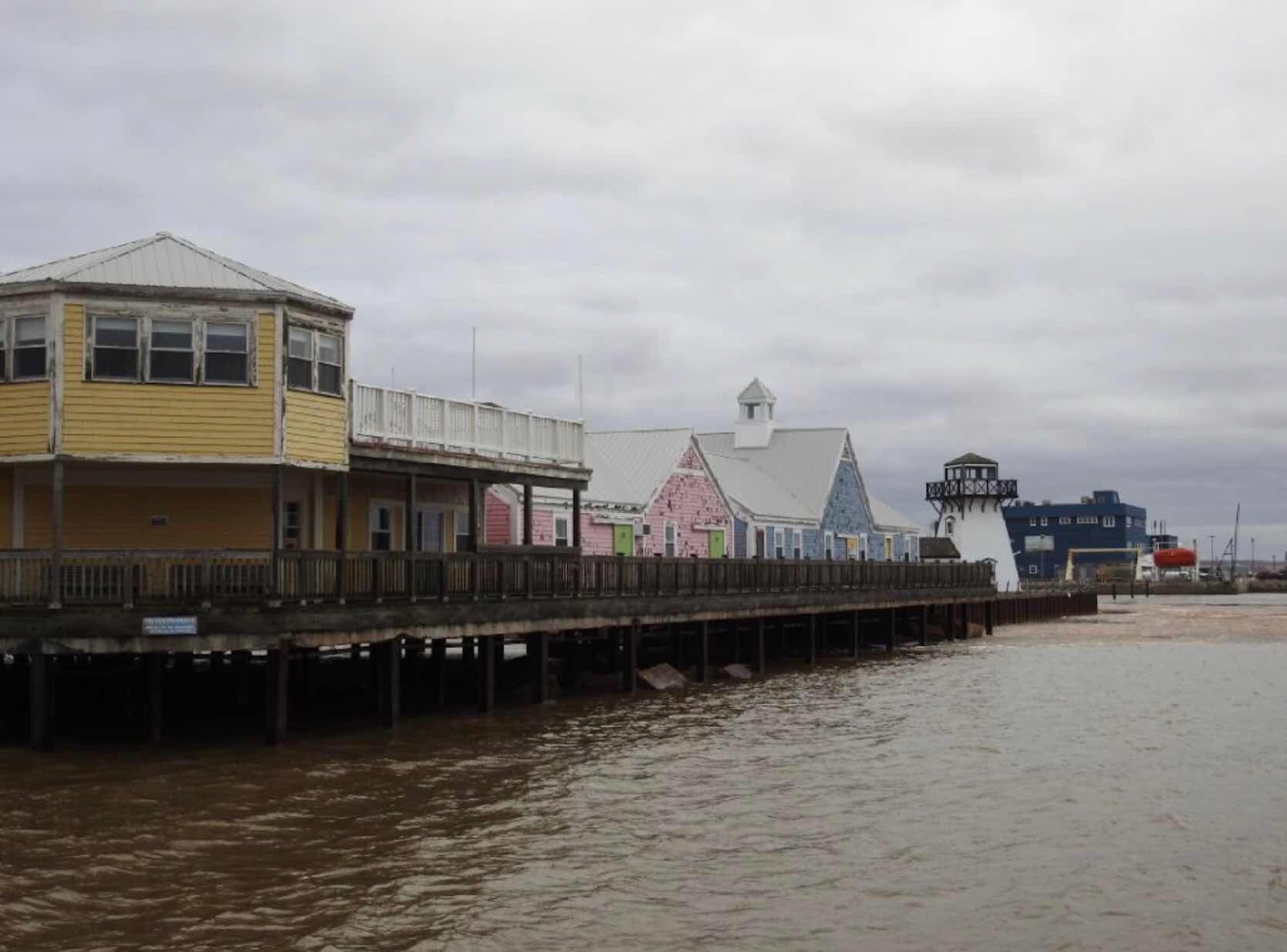 The marina is empty, the boats all ashore for the winter. 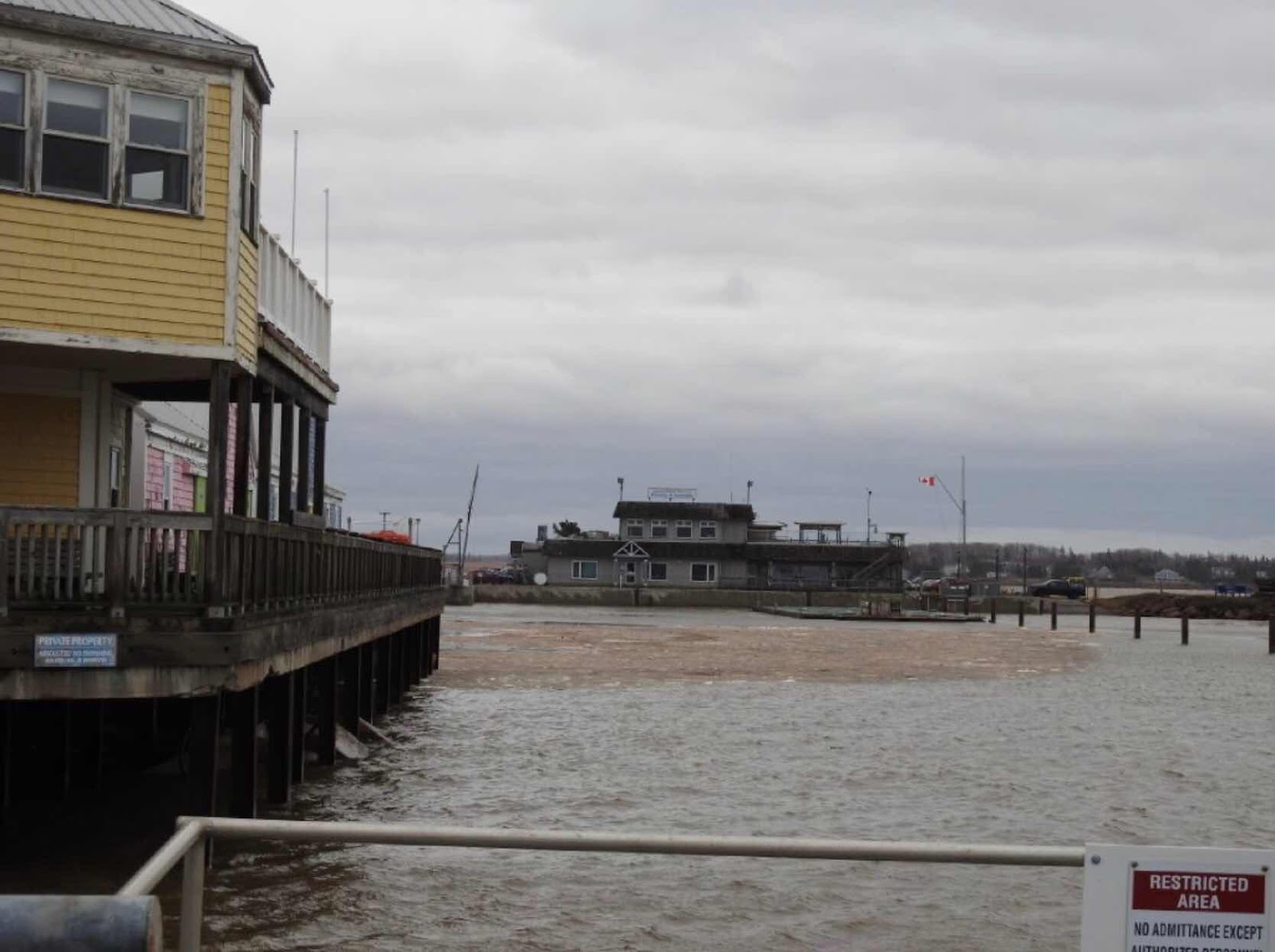 However, every summer, the area is alive with marine activity when the recreational boaters tie up there.

Ice was forming in the marina in December, though into the second week of January, the harbour has yet to freeze. 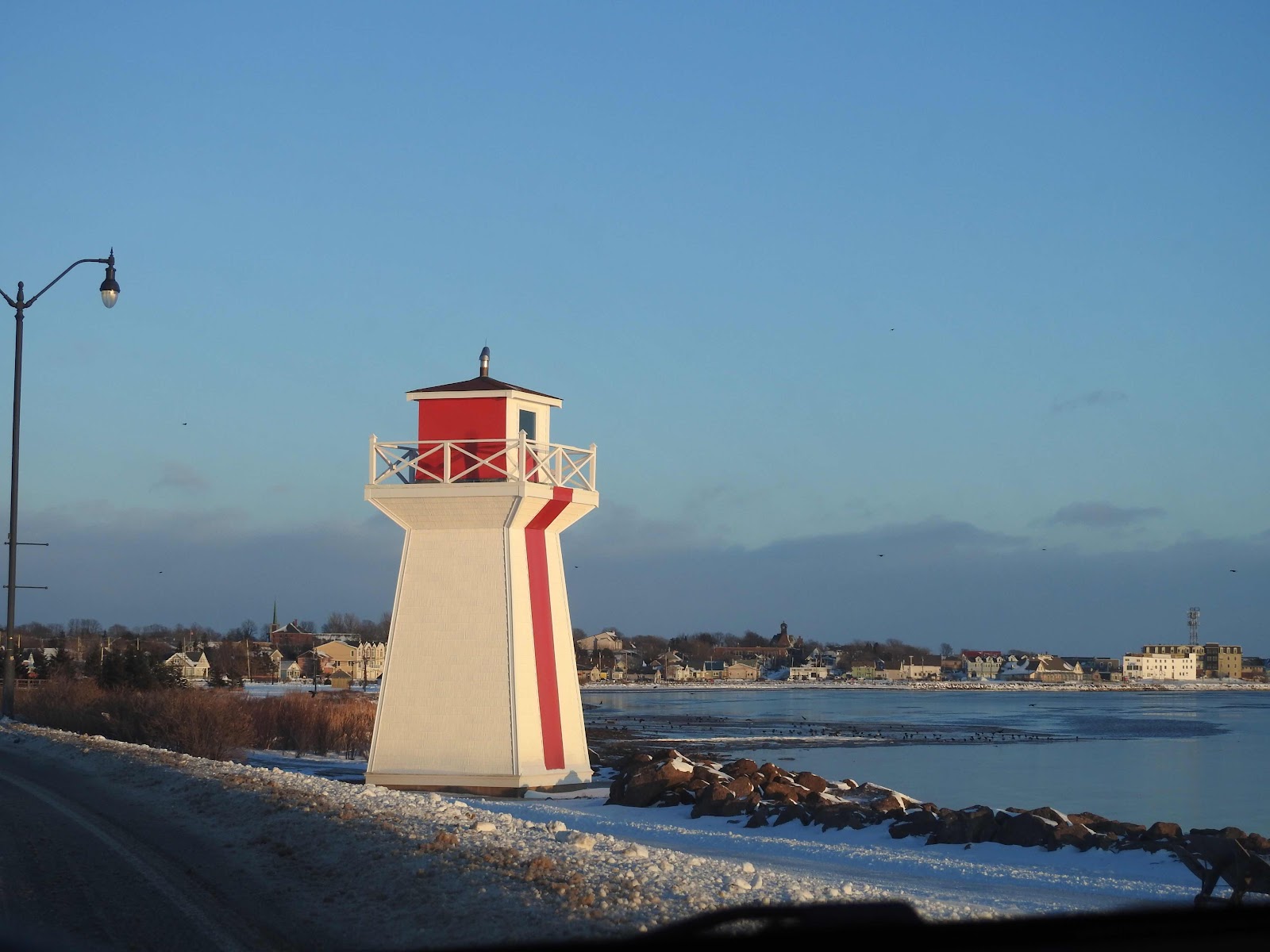 I love learning about your island, Marie. That last picture is a stunner. :-)

That's a cute little lighthouse too.

Spinnaker’s Landing looks appealing to me

You do live in a beautiful area, great shots. Cheers Diane

i LOVE the close up of the hard working men. and the lighthouse, it is beautiful!!!

The lighthouse is pretty impressive. It looks small compared to the ones I usually see.

Underwater work is amazing to me. How do they build rigs, dredgers and other working boats. Who can evem imagine how this works.

I always enjoy pictures of the island. It has incredible beauty and is so very different to anything here.
Many thanks. And your current header photo is blissfully cool looking - which is very welcome at the moment.

I love the last colorful shot.

That is a grand, old timey light fixture in the last photo.

You do live in a beautiful place. I love the lighthouse.
Enjoy your day, happy weekend!

The harbour will be tranquil fir a few months and then the noise and the congestion will start up again.

Looks a wee bit chilly over your way Marie, the complete opposite to the weather here. Loved the sound of your New year family dinner, very special and the shot of Georgie bounding into the forest is priceless 💙

I wonder if there is a school for teaching how to run the towboat and the dredge is it just on the job training....maybe even growing up with a dad that does it and just grow up learning.

I love that last shot.

Hi Marie, This afternoon I spent a little over an hour looking over your posts from last August and September. In the days ahead I will continue until I'm up-to-date with all your posts. I don't want to miss any of them. I'm starting my tenth year of blogging and, the way I see it, I have not found a better blog than Island Musings. I enjoy your photography and writing. You may laugh at this but I seriously think you have the most wonderful way of taking what some might call ordinary and presenting it in a way that makes it special. During August and September the one post I must mention is called A Dorian Experience. What a great job you did writing up the story of the hurricane as it affected PEI. And there is one photo I've got to mention too ... it's the last photo in your 14 September post called "Forest vignettes". That's a contest winner for sure. Now, thank you for keeping an eye on John's Island and your comments on my blog. I can't wait for you to hear about my visit to PEI last September. Take care, Marie, and have a good weekend.

Your island is fascinating. I love learning all about an area that is so different from my home.
I sure is pretty but makes me shiver as I look at the ice forming around the edges.
Thanks for sharing .
Sue

Nice shots - I was taking some colourful boat pictures in the last weeks as well - they may even end up on my blog!