The harbour at Summerside hasn’t been dredged for a number of years and the process began this past November. There isn’t much boat traffic before the harbour freezes every year, so the dredge boat was an unusual sight. The dredger worked at different locations and when my husband and I photographed it one day, it was positioned near the Indian Head Lighthouse. 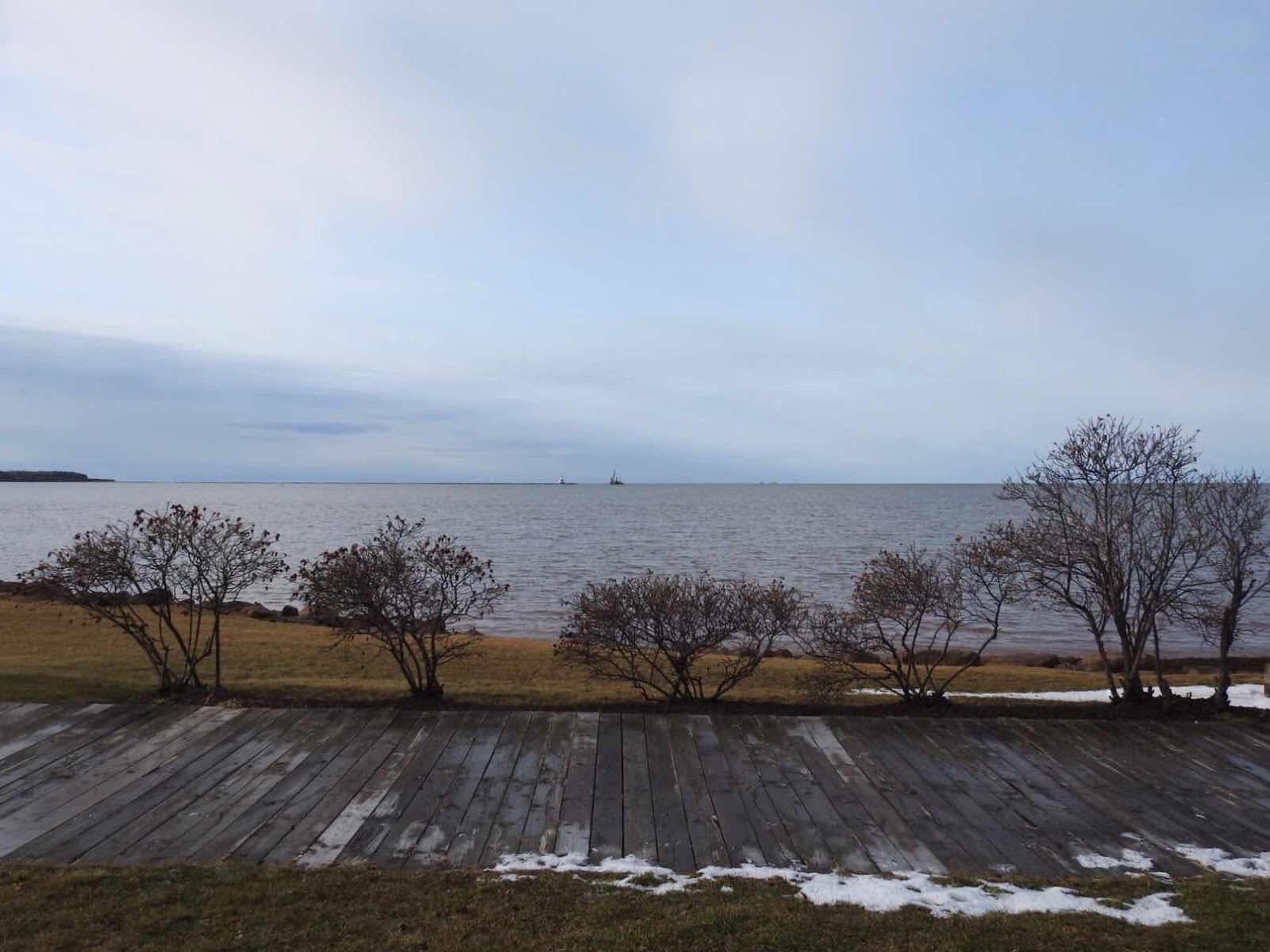 We took the first photos in the harbour looking out towards the lighthouse. The sun on the structure highlighted the repair work done over this past summer. 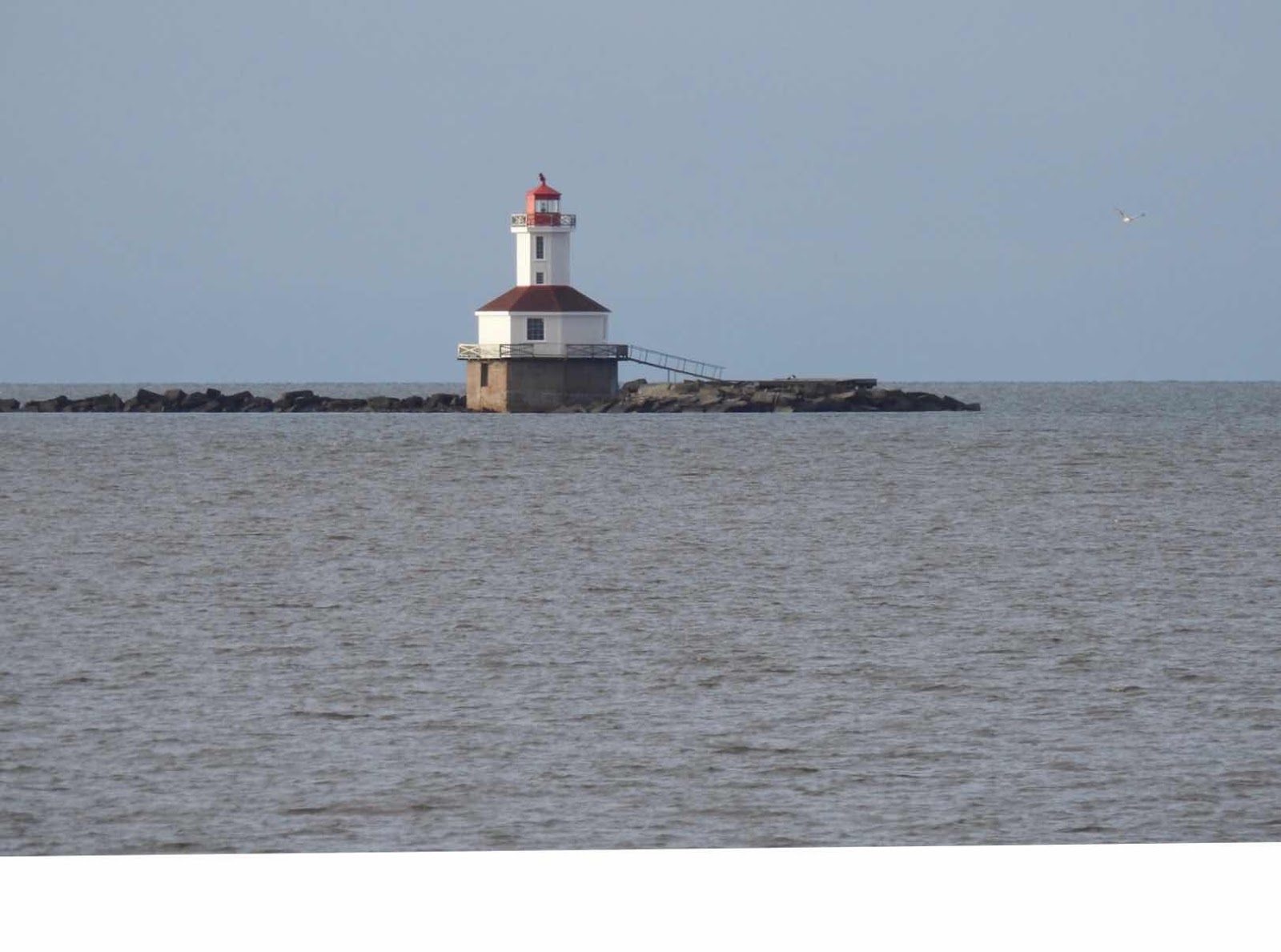 From the inner harbour, you could see the dredge work on the channel wasn’t far from the lighthouse. 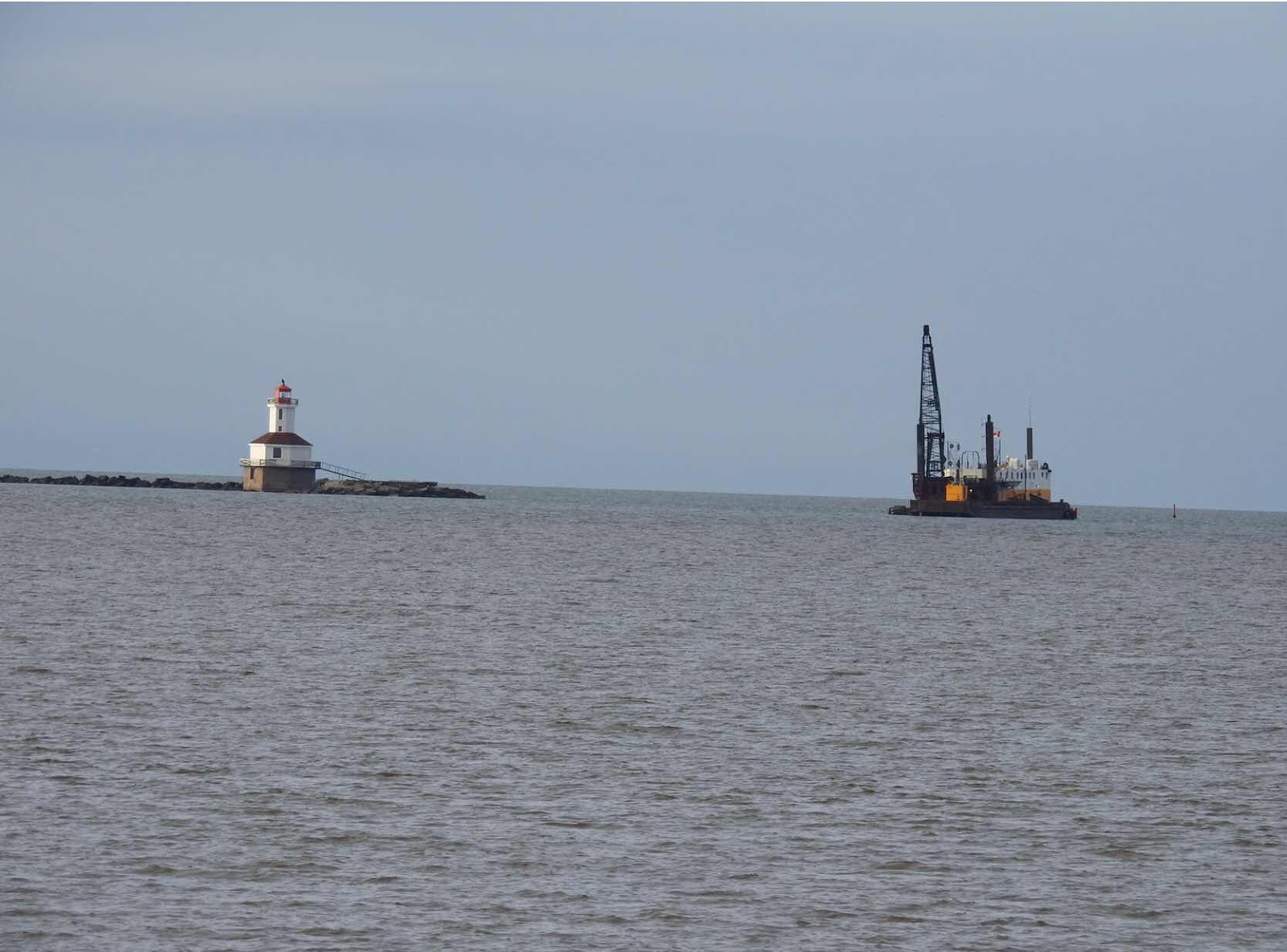 Zooming in on the activity off-shore in the Northumberland Strait revealed what I thought to be a tug boat with a barge. 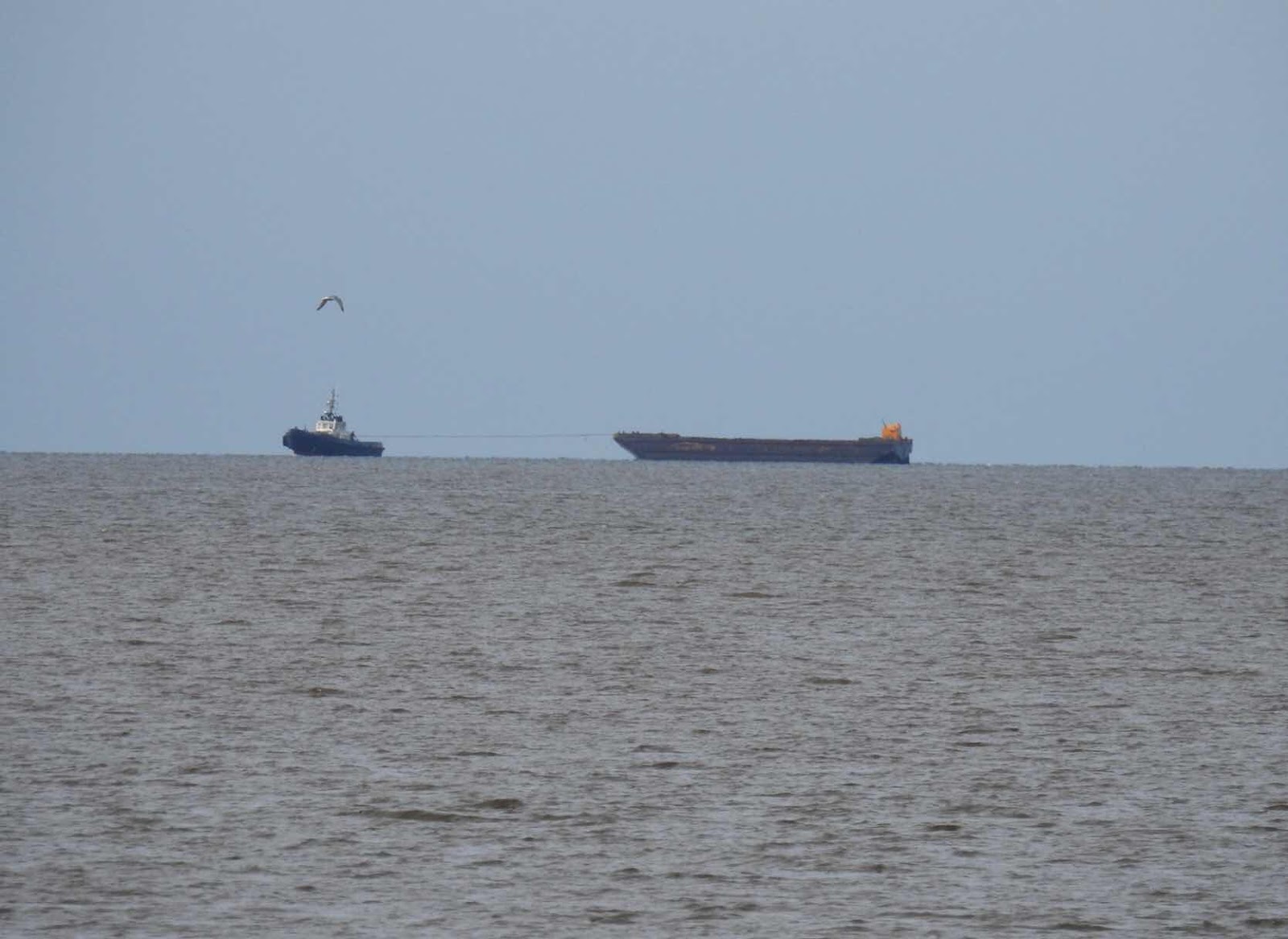 One of my favourite images of the two has a crow or raven in the shot as well. 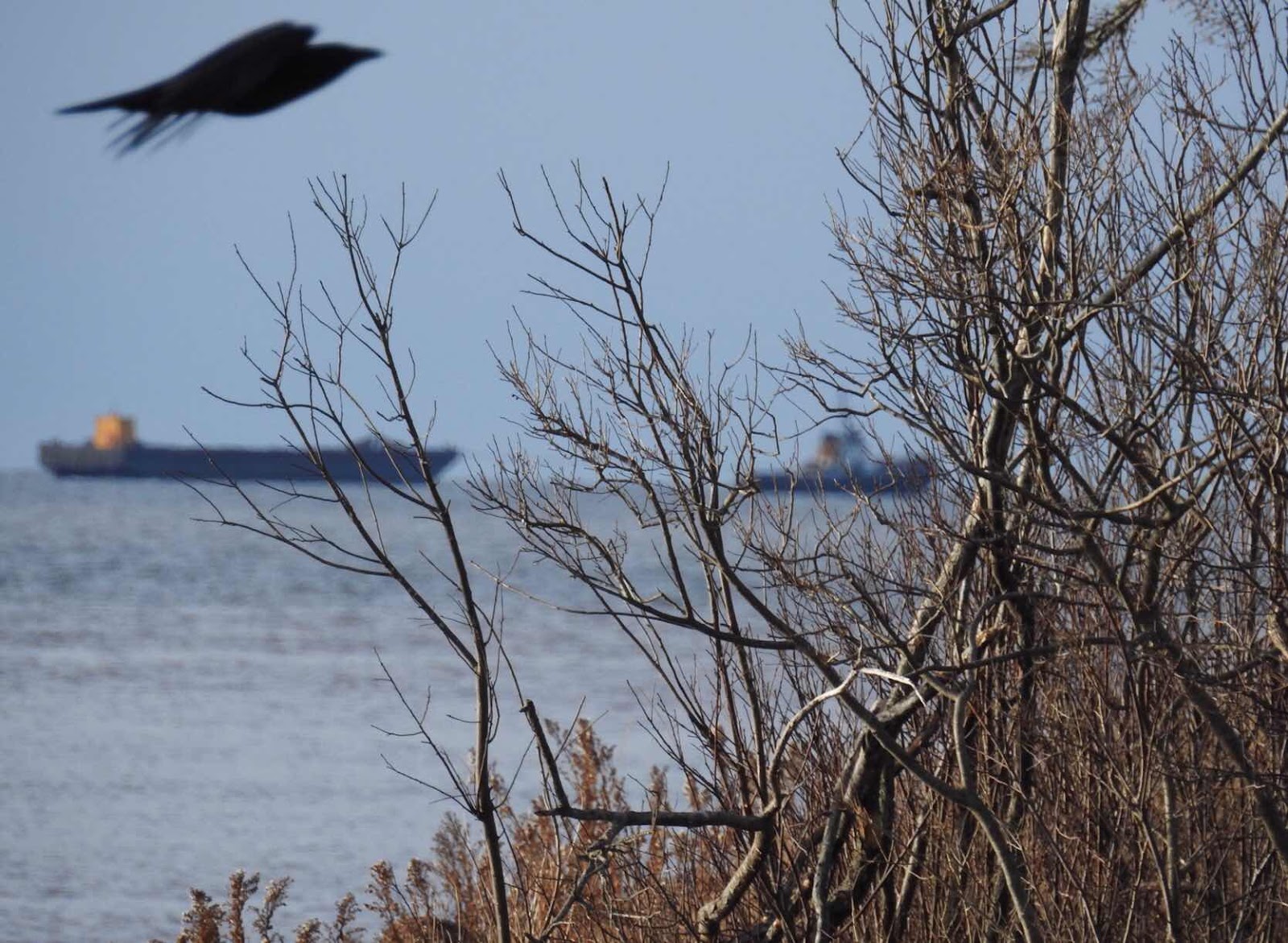 I learned later a barge is pushed into place by a tow boat not a tug. The bow of the tow boat is constructed to allow it to make contact with the barge to manoeuvre it. Below you can see the tow boat pushing the barge. 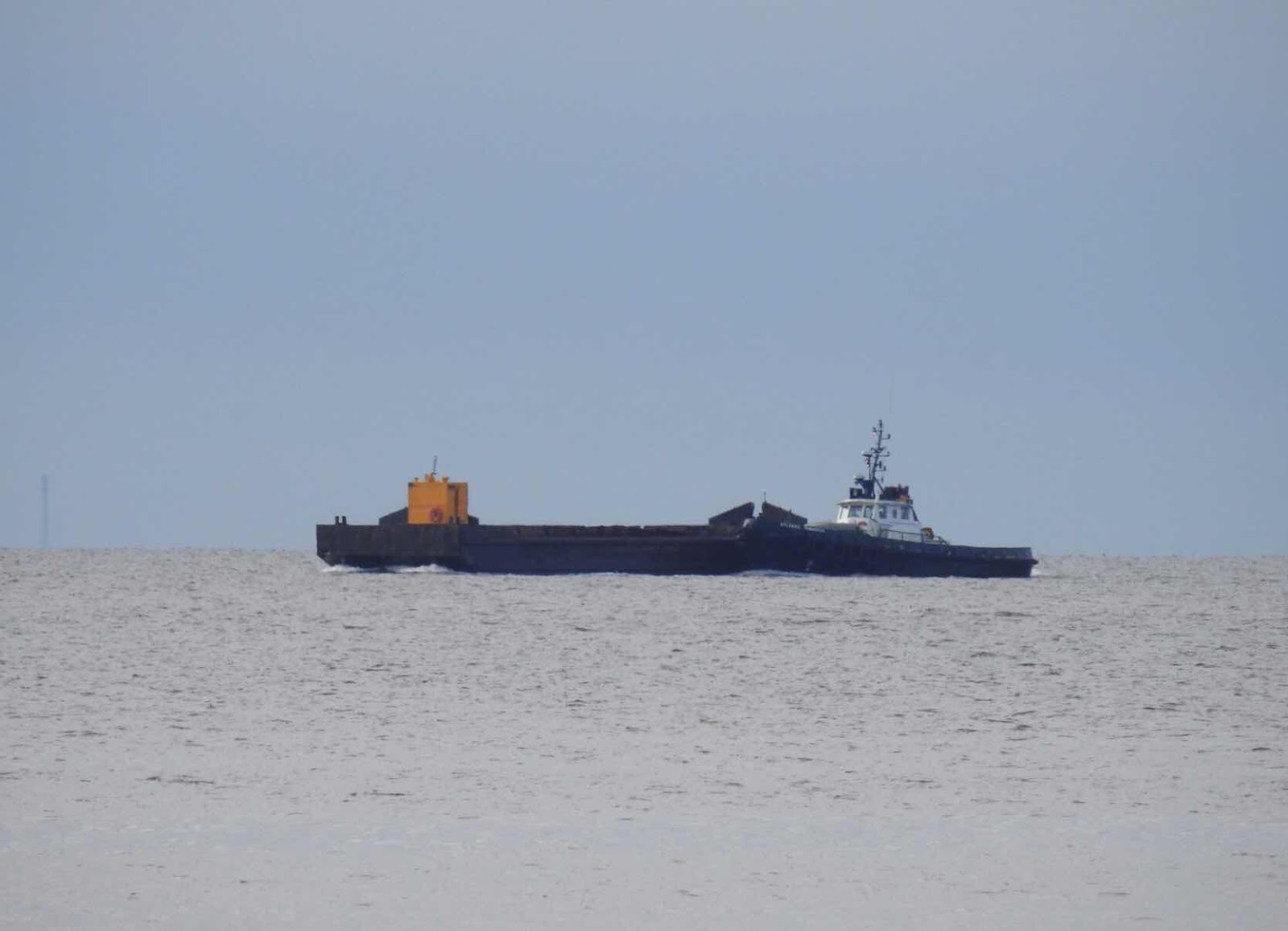 The barge works in tandem with the dredger. Once the barge is manoeuvred in place, the crane on the dredge boat lifts the soil into the barge. Later it is towed off shore to be dumped. 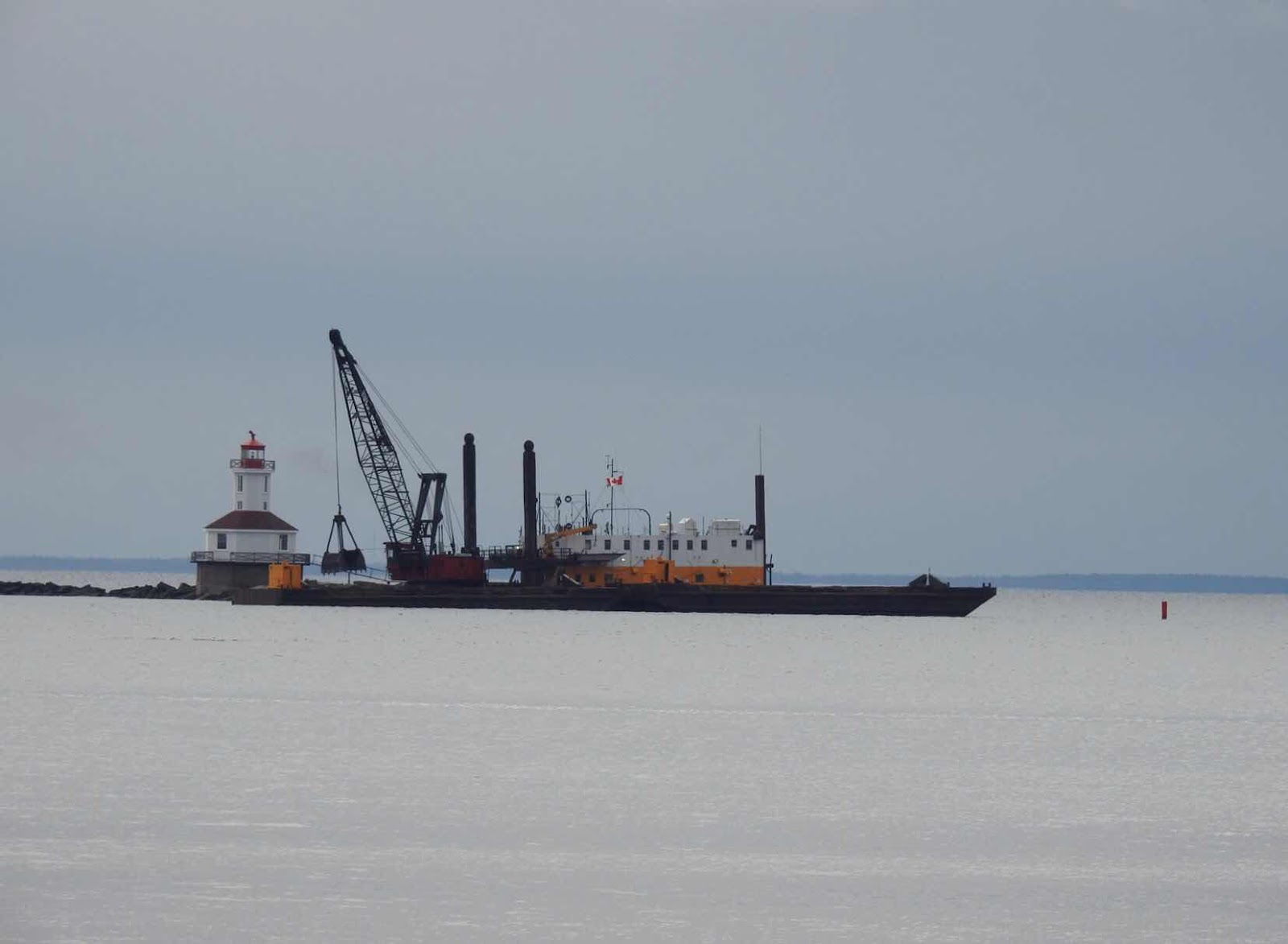 The harbour will be able to accommodate small cruise ships following this work.

I'm glad you explained what dredging is and its purpose because this prairie girl had no clue.

Fascinating! I also knew little about dredging and how it works. :-)

Not being used to seasons, it is so interesting how I just know that it is cold out by looking at the pictures.

Seems to me that dredging would be a monumental undertaking but I guess they know what they are doing.

I do love a lighthouse.
Poor little tow boat having to push that barge!

That lighthouse is a beauty.

What an interesting process, thanks for explaining it.
I love your new header, it's so pretty and the different coloured houses stand out with the dark clouds in the sky. Have a wonderful day, Marie.

they have been dredging the oceans on the new jersey coast. since super storm sandy and the other nor'easters we have been having. tow/tug i thought it was all kind of the same!!

Huge thanks for the education. And the images.
I do love lighthouses - and the corvid family.

Very interesting . It would seem that this is slow work.

I would love watching this being done.

I like the shot with the crow, but also the one before it has a bird in it, too.

Quite an interesting process Marie! Wonderful that you were able to get some closeup photographs of the boats at work. Has Summerside had cruise ships come in before? I'm sure this would be a boost for the tourism industry!

Life at seaside is so fascinating to me, Marie, as I can tell it is for you. And when it's about boats of whatever kind, including dredgers, you're getting into Dutch territory for me as well. I LOVE lighthouses, so that's an added plus...as is the photo-bomber! :)

This kind of disturbance to the bed of the ocean plus the dumping of the soil elsewhere must be quite damaging to the marine ecosystem.

Your pictures are always so interesting.

I have heard good things and bad things about dredging. I know the harbor here had to be dredge to allow the large ships come in and dock.
I like the cute lighthouse. Wishing you a happy day and a great weekend ahead!

Very interesting to see how this all works.
Cruise ships in the harbor mean more people and more profits.
Thanks for the lovely photos.

That is interesting. I never knew the difference between a tug boat and a two boat. I'll have to make a trip to the ship channels to see if I can spot the two kinds.