It was -13C and sunny without a breath of wind. We’d heard the Rotary Trail had been groomed so we headed out with Georgie, the golden grand-dog who was visiting for a few days. The weather had kept us in recently and we missed the fresh air and the time in nature. It did not disappoint.

The coniferous trees were laden with snow as we entered the trail system. 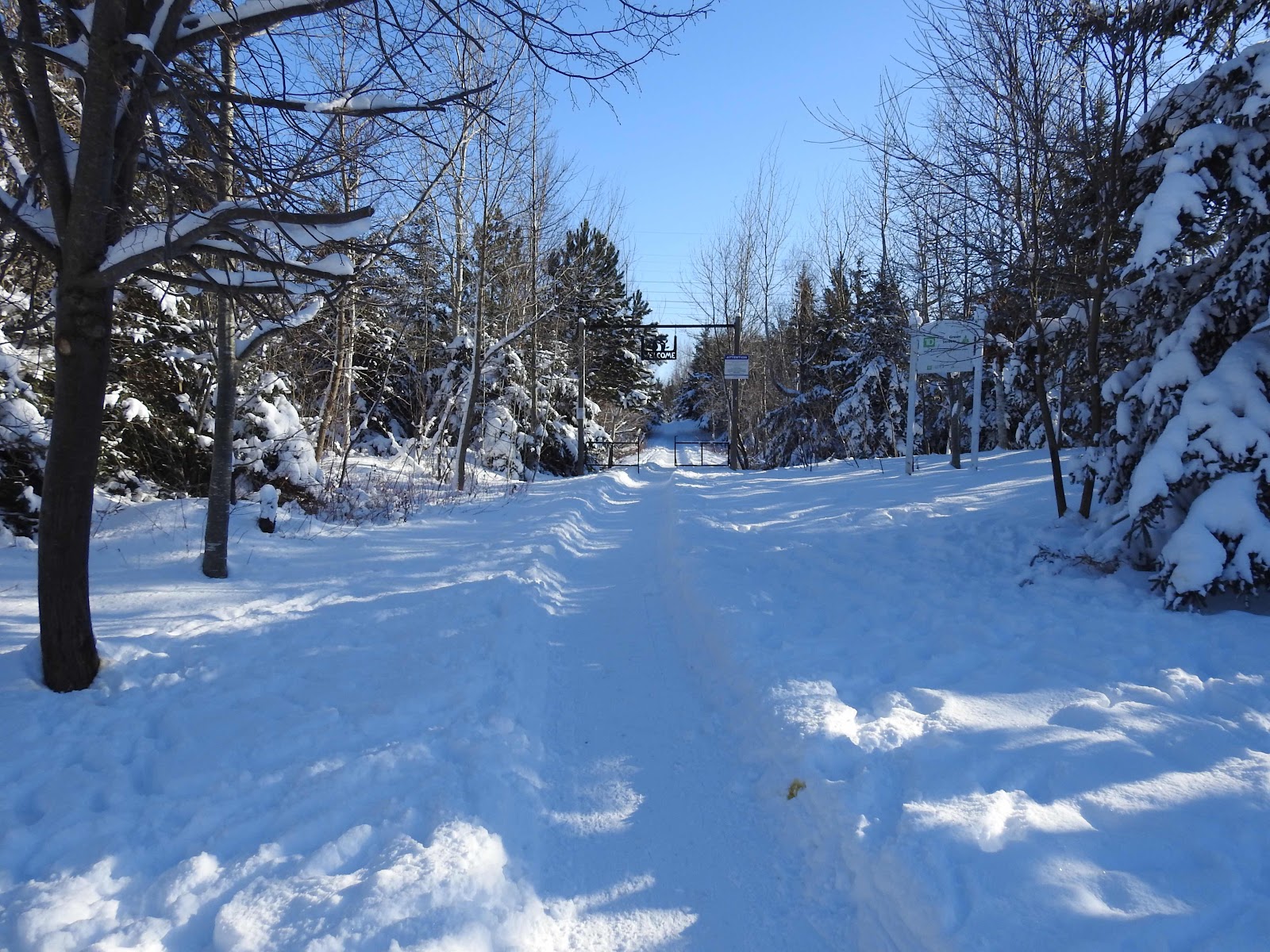 The trail was well groomed and the walking was easy in the cold temperatures. The sunny sky made the shadowed areas look blue. Solitary trees, laden with the fluffy white looked frozen in time. 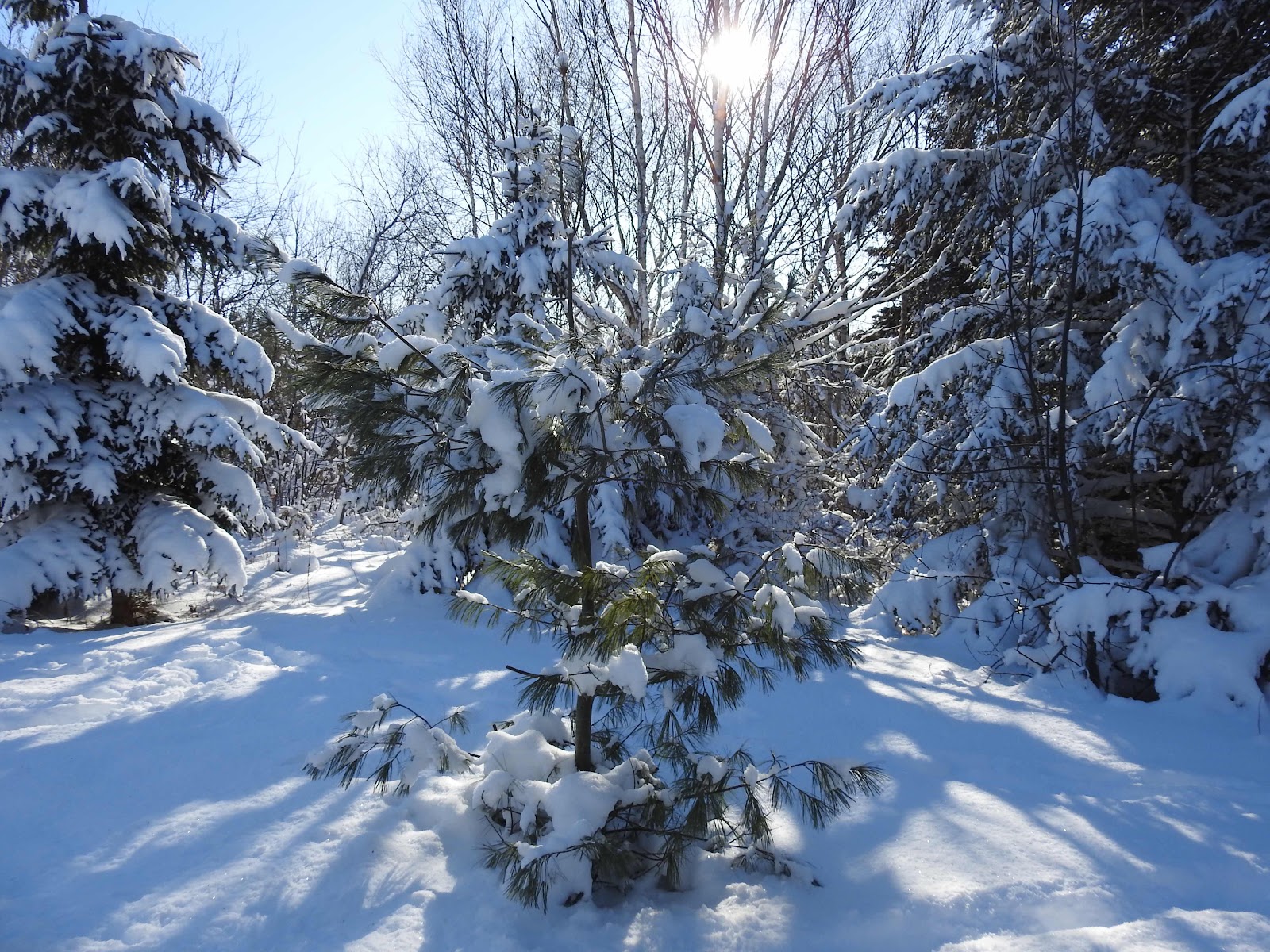 The song of a Downy woodpecker was unusual. The only sound we normally here from the tiny birds is the tap tap along the tree trunks.

The snow piles up on the remnants of tree trunks and on the windward side of the trunks. 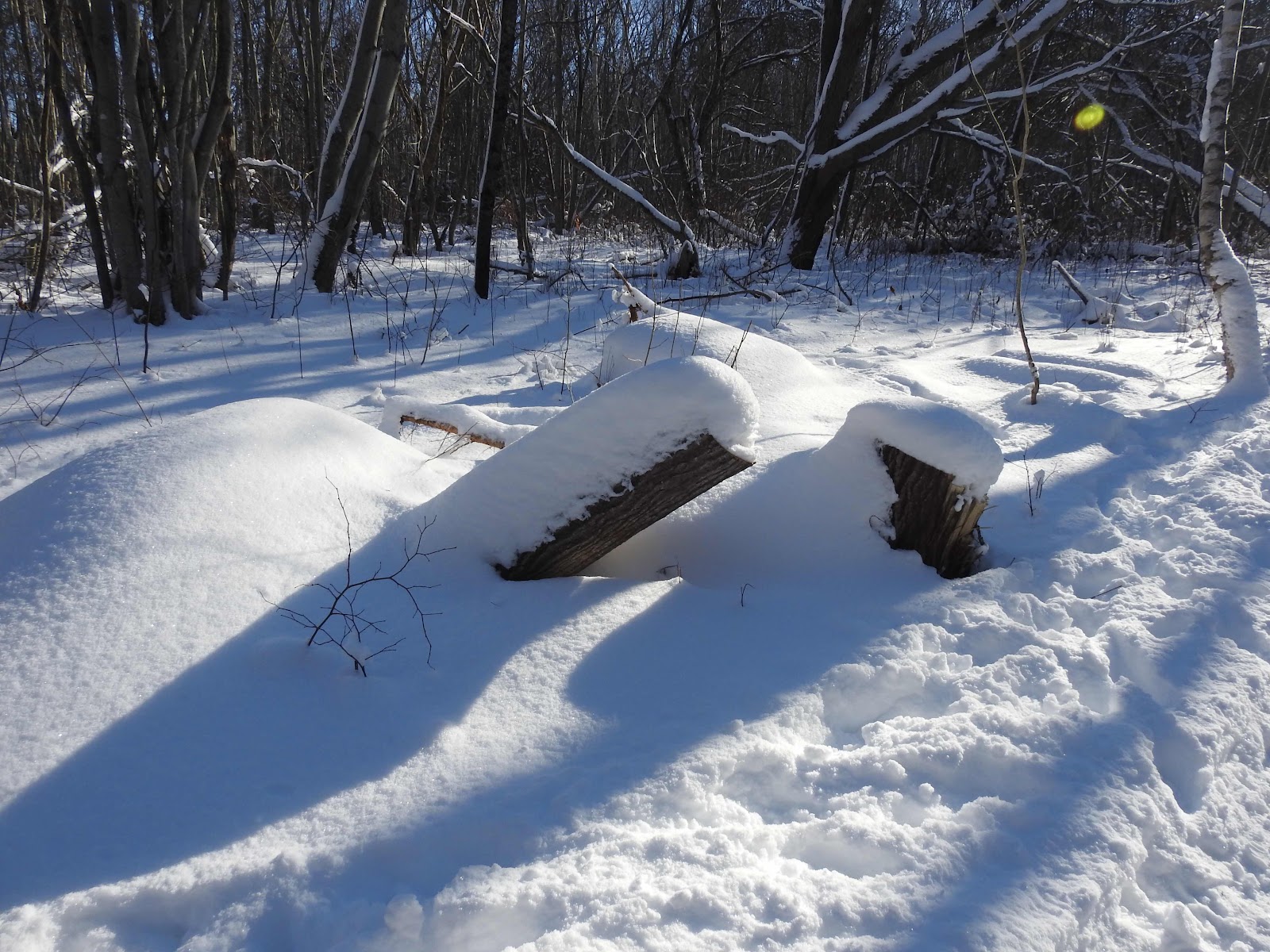 It can be harsh here when the wind blows. 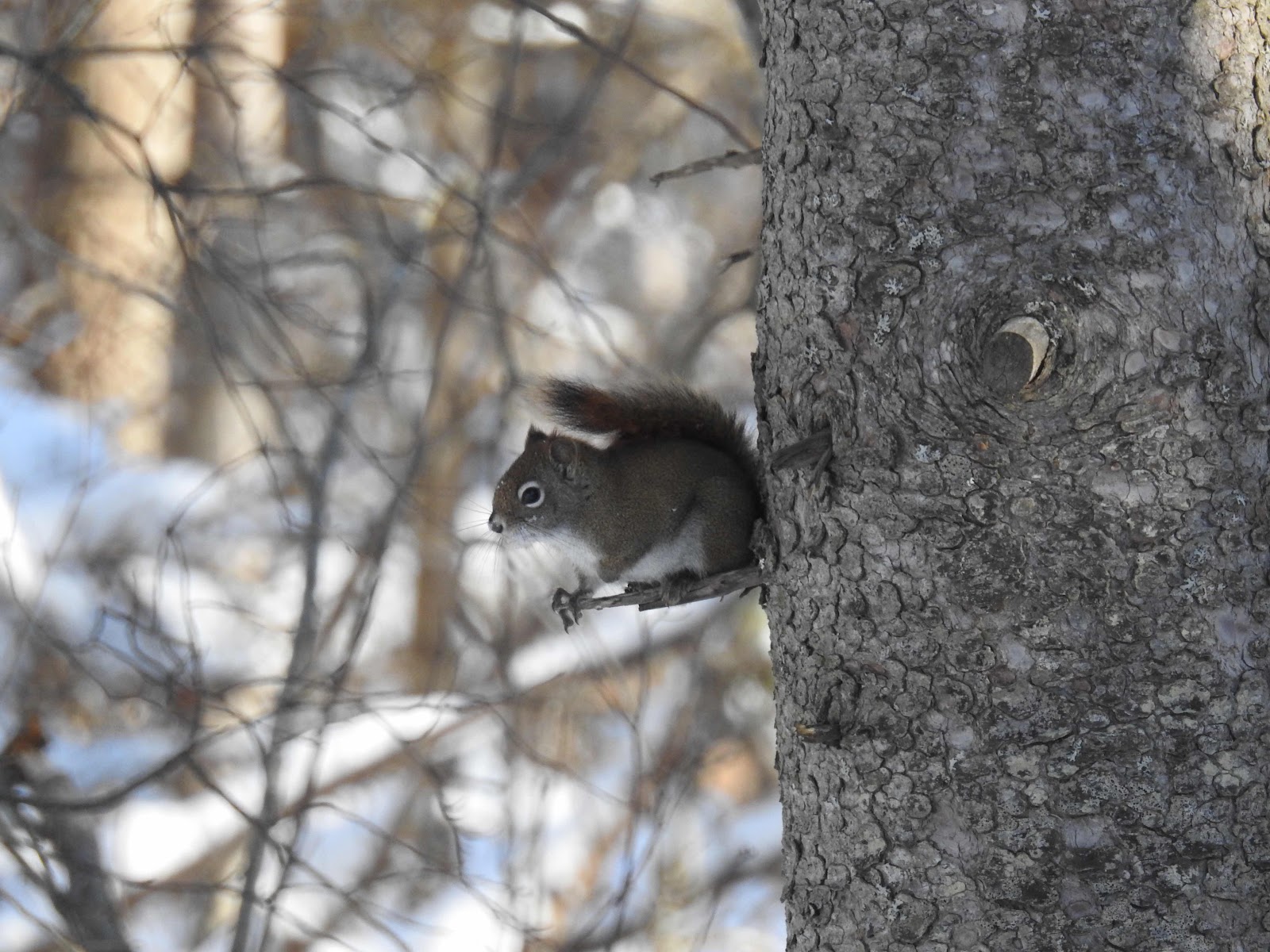 She enjoyed the trail and we allowed her off lead to run between us. Georgie stayed on the groomed trail where she stopped periodically to nip the ice from between her toes. 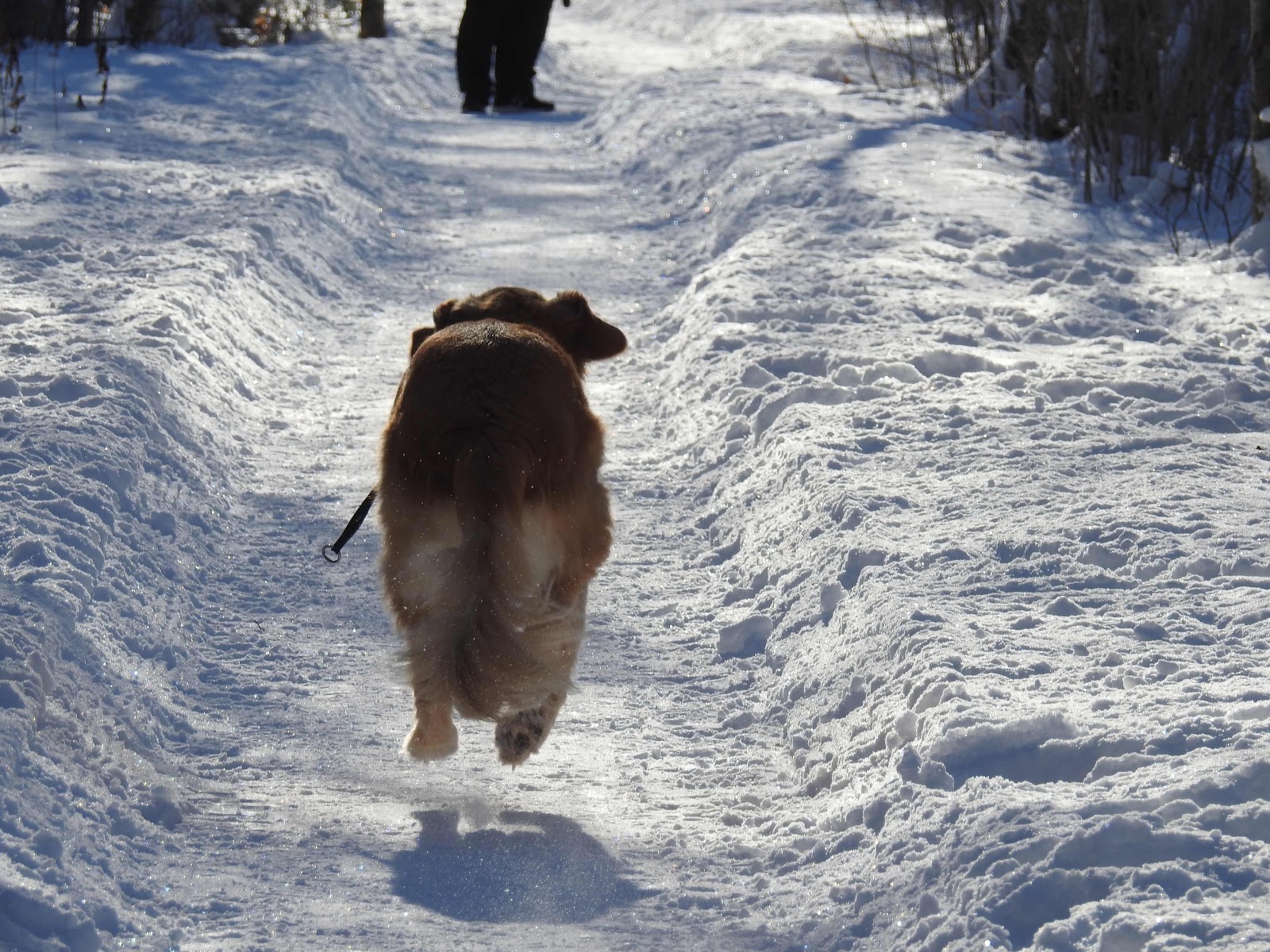 She groomed herself in the snow.

Before long we had walked to the Confederation Trail which is used by snowmobilers this time of year. 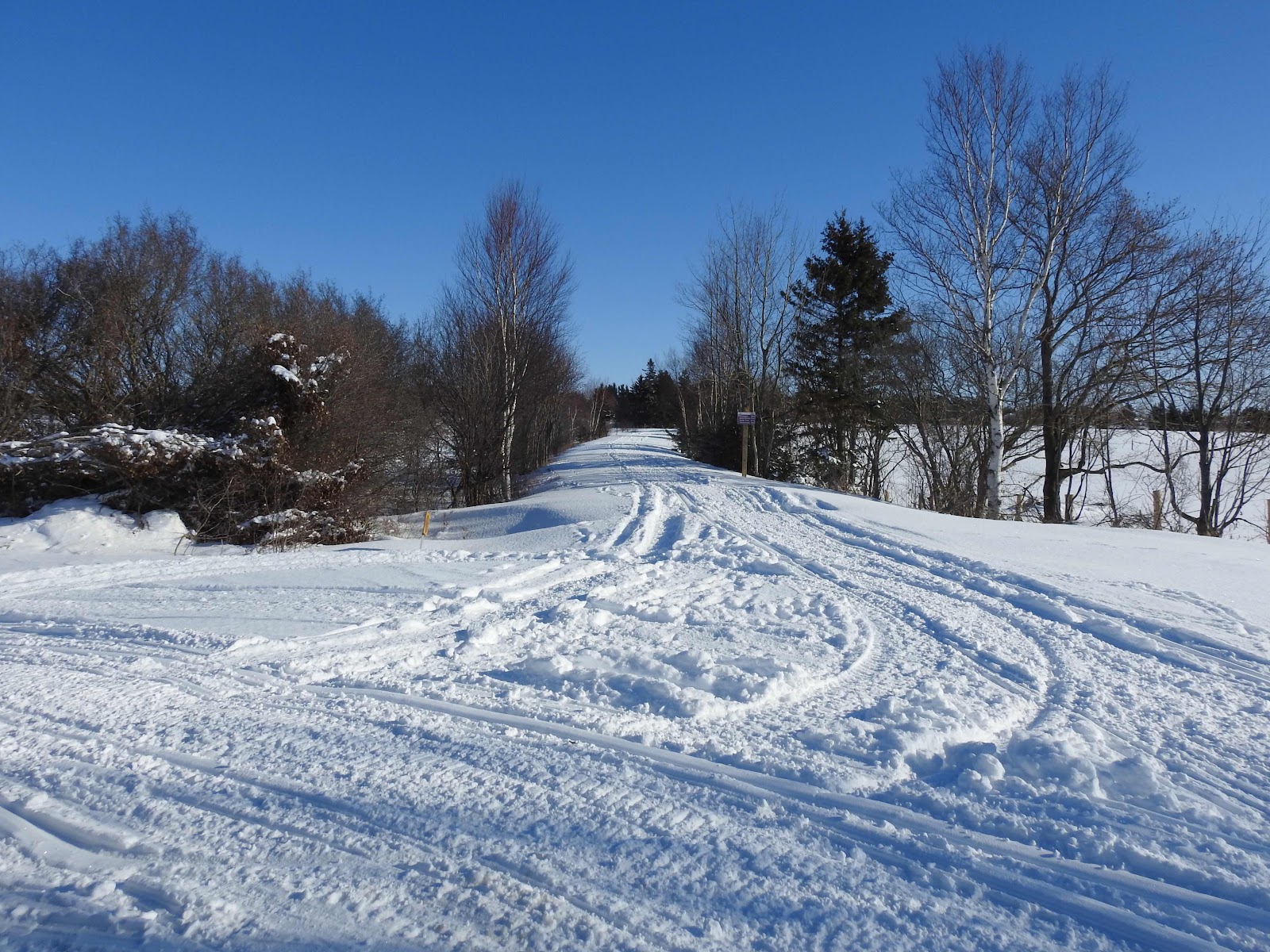 Some snow machine enthusiasts were on the fields which are parallel to the trails.

We walked back the way we came, savouring each minute in nature this time of year.

Pretty winter scenes. I like the shot of Georgie running and the cute squirrel. Have a great day and happy weekend!

It looks like it was a good outing. I love the picture of Georgie in mid-leap. :-)

What a beautiful experience. Thanks for sharing. We see the downy woodpecker frequently, but have never identified its call.

I wondered if the snow bugs the paws after awhile. Sounds like she know how to take care of herself.

What a fun walk.

How very, very beautiful. Many thanks.

I probably would have enjoyed that if there was no wind. Always here it seems there is a biting icy wind. Have a good weekend, Diane

The scenes are gorgeous. A walk in the brisk air can be so refreshing.

Georgie would definitely have an interest in that squirrel!

These are amazing pictures!!
We are practically snowless,,, I am not complaining... just saying... : )

Looks like my kind of walk, Marie. In preparation for this kind of activity, we make lots of soup in the late fall so that we have several kinds in the house, and a bowl of hot, steaming soup at the end of the walk is about as perfect as it gets.

Must have been so good to get out again Marie, although I can't even imagine those kind of temperatures 😱 Georgie is in her element, amazing that she doesn't seem to feel the cold. Gorgeous captures here ✨

the first two pictures could be Canadian winter postcards, they are so gorgeous!!! i'm sure it felt good to get out, and enjoy that crisp fresh air!!!

A chilly day for a walk but I'm sure you were bundled up for it!

What a lovely way to spend some time...had to look up what a Downy woodpecker sounds like. I cannot believe I am this old and did not know.

Stunning photos. It is great that the trails get groomed so people (and dogs!) can enjoy them. I do feel a bit sorry though for the wildlife trying to live in that cold weather.

Lovely views of a real winter. We will not get one this year, it seems.

Wonderful Photos - Airborne Pup, Righteousness - So Pleased You Were Out & About - And The Weather Status Report Cracked Me Up - Well Done

I love that picture of Georgie! It looks like she's flying. I love it when they're so happy it seems like they literally can't stay on the ground.

I see why you called my snow picture a dusting! That is A LOT of snow! It's amazing to me that you stay functional in it. I don't think anyone would be on the trails here if we had that much snow.

thank you for taking along
the serenity you enjoyed was passed to me little bit
i agree wind can be so cruel in such weather but Lord is merciful indeed!

Love the blue snow. We had a little cold front blow in last night and I was thinking how cold it was. After looking at this, I'm rethinking my definition of cold.