It was one of those days when winter invites you outside. Without a breeze and 2 degrees Celsius, my husband and I headed to the beach at Cavendish for a walk. Georgie, the golden grand-dog accompanied us. She enjoys the area too but to be honest, she enjoys everywhere.

The boardwalk to the beach at Cavendish was empty as we approached. This was one of the rare times this has ever happened since locals visit the beach in the off season. The wood against the backdrop of the snow and sky gave us pause. 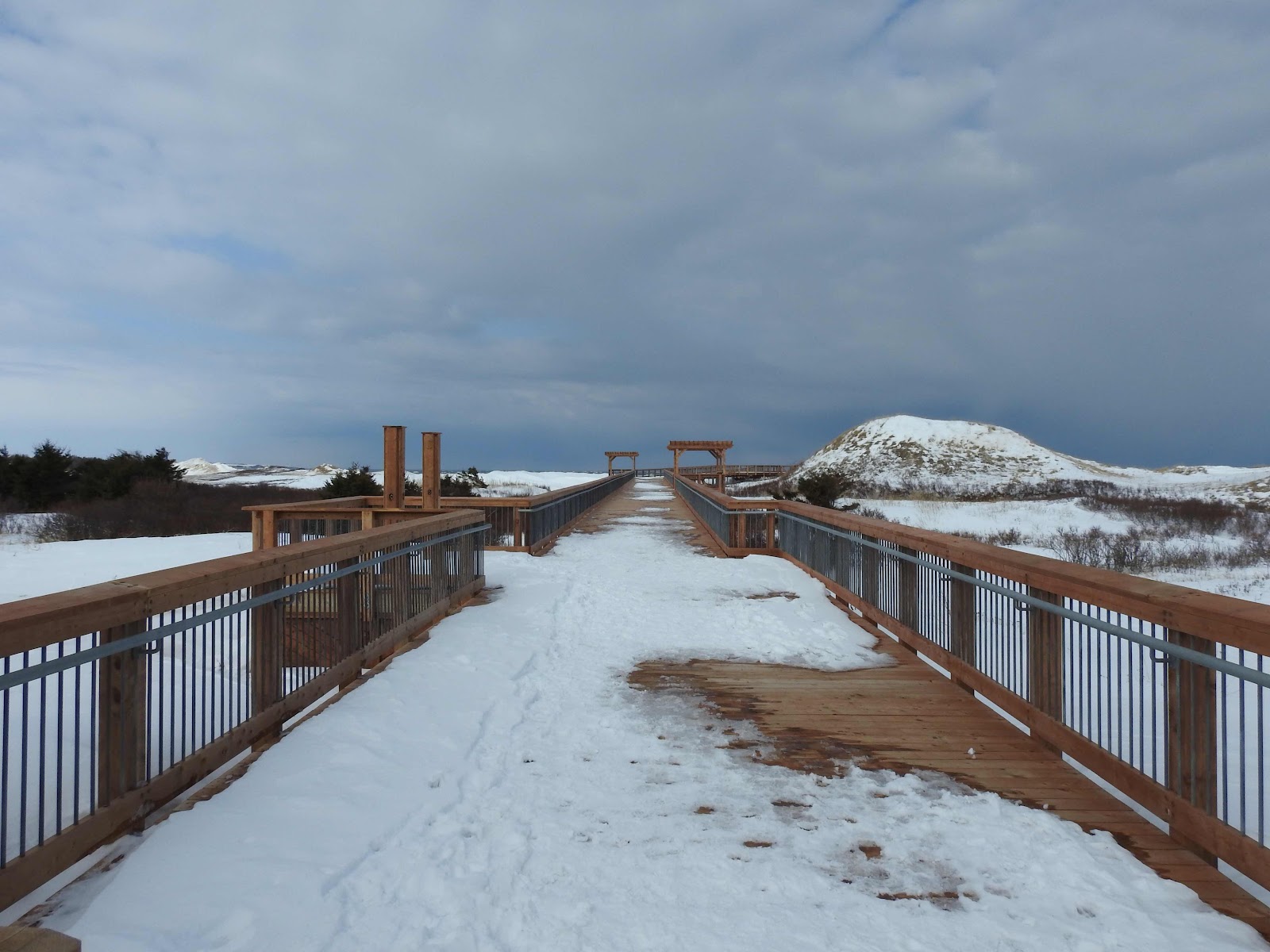 The boardwalk disappeared behind a sand dune giving the sense of a walk into the unknown. Georgie was anxious to go while I wanted to take in the scene for a few minutes. She won!

Along the way we could see through the dunes that the sea along the north shore was not frozen this year as is usually the case. 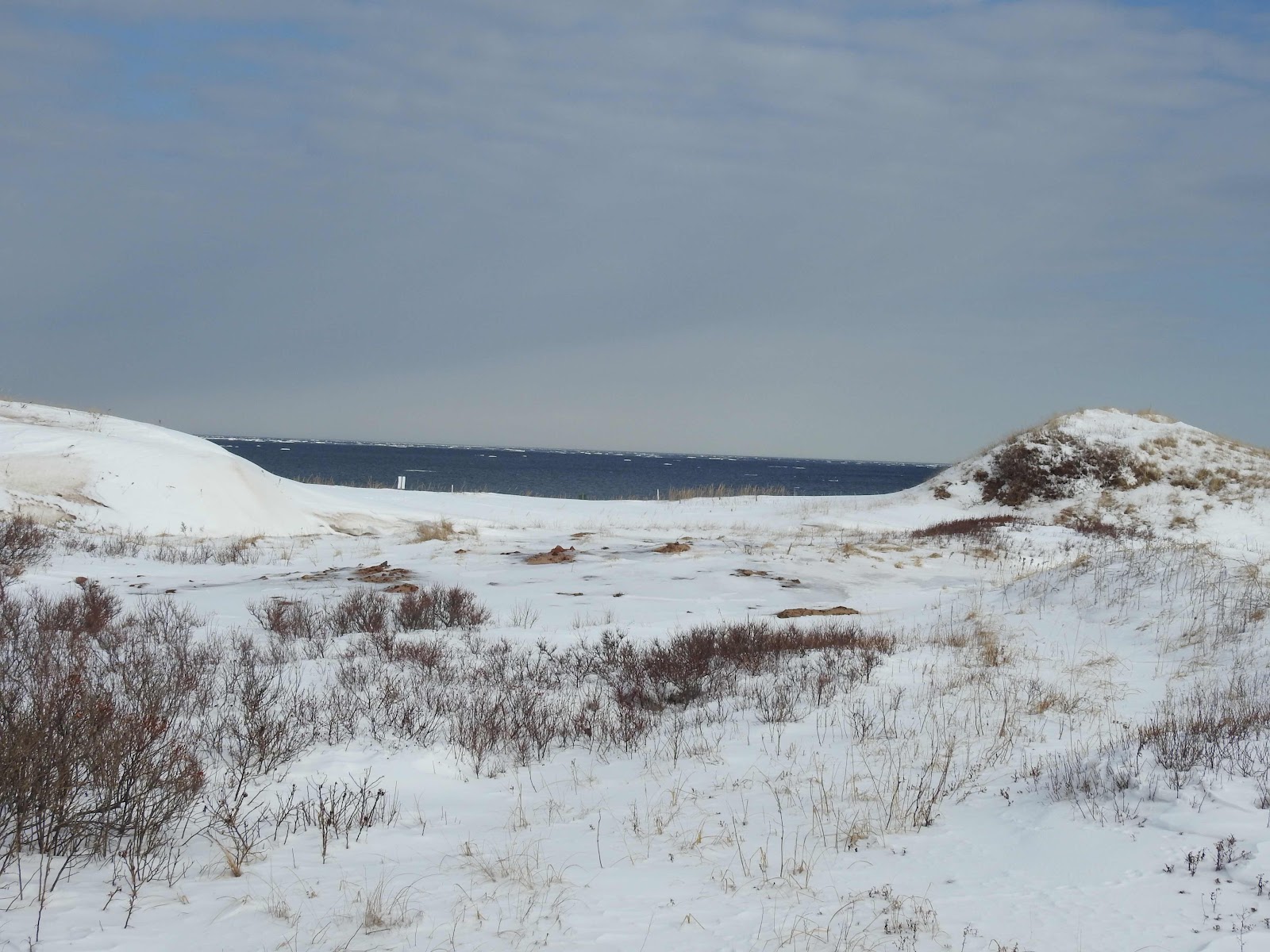 The stream across the marshland and behind the dunes hadn’t frozen either. 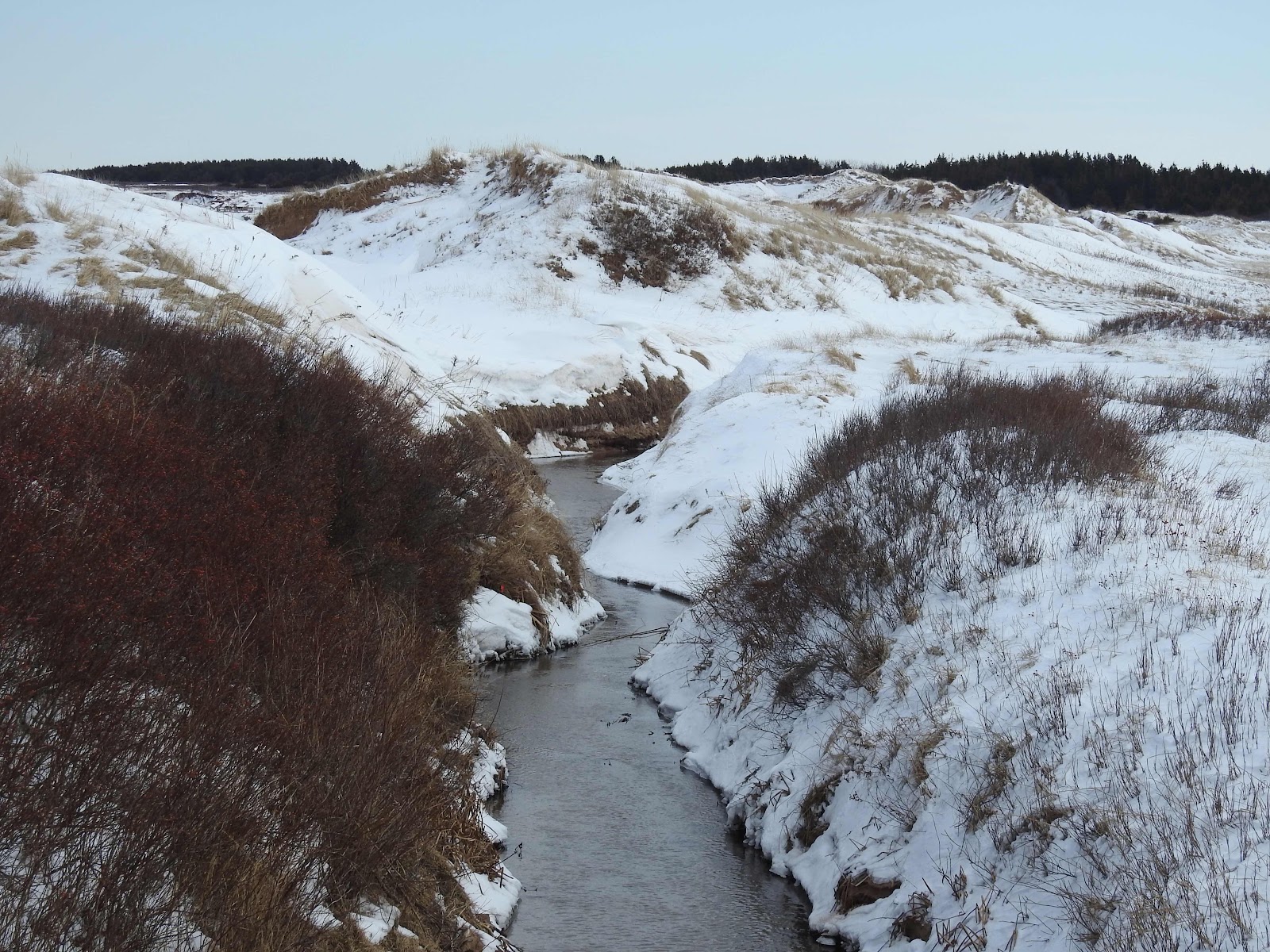 From the top of the boardwalk overlooking the beach, the dunes were frozen and snow covered while the beach was frozen past the low water mark. 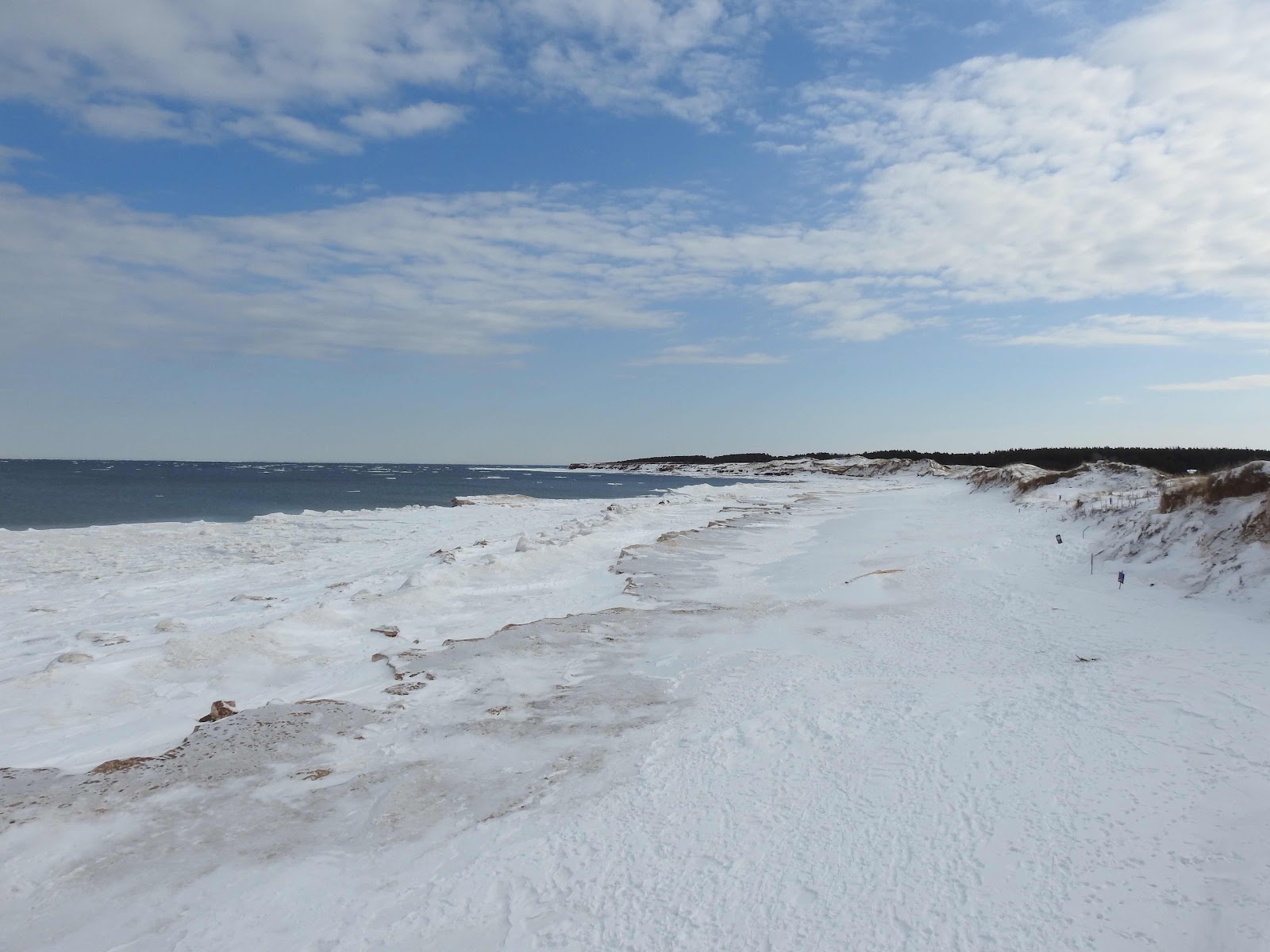 It was possible to walk along its length. 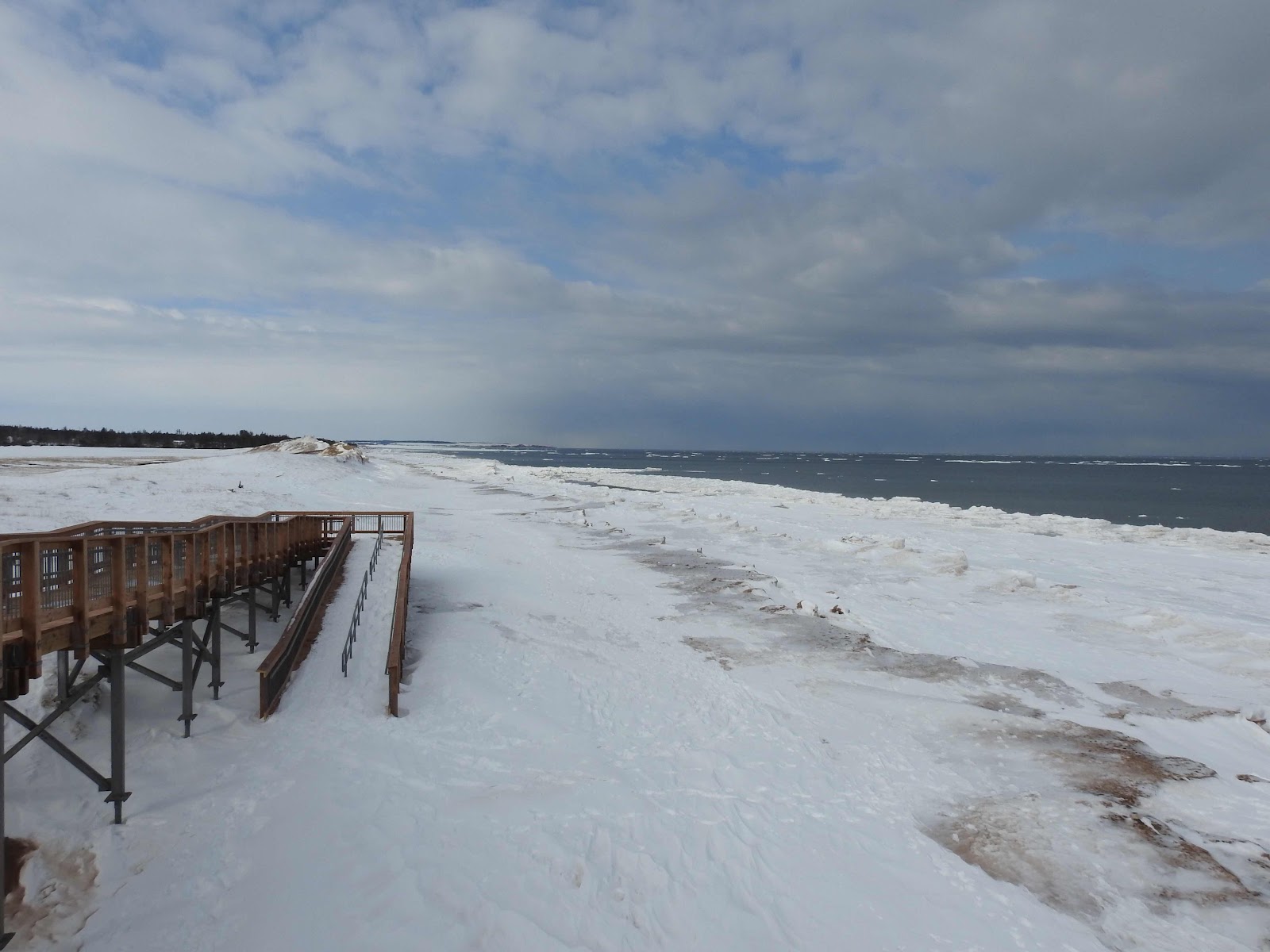 Dogs are allowed on the beach in the winter and without a soul in the area, we let Georgie off lead to run between us as she always does. 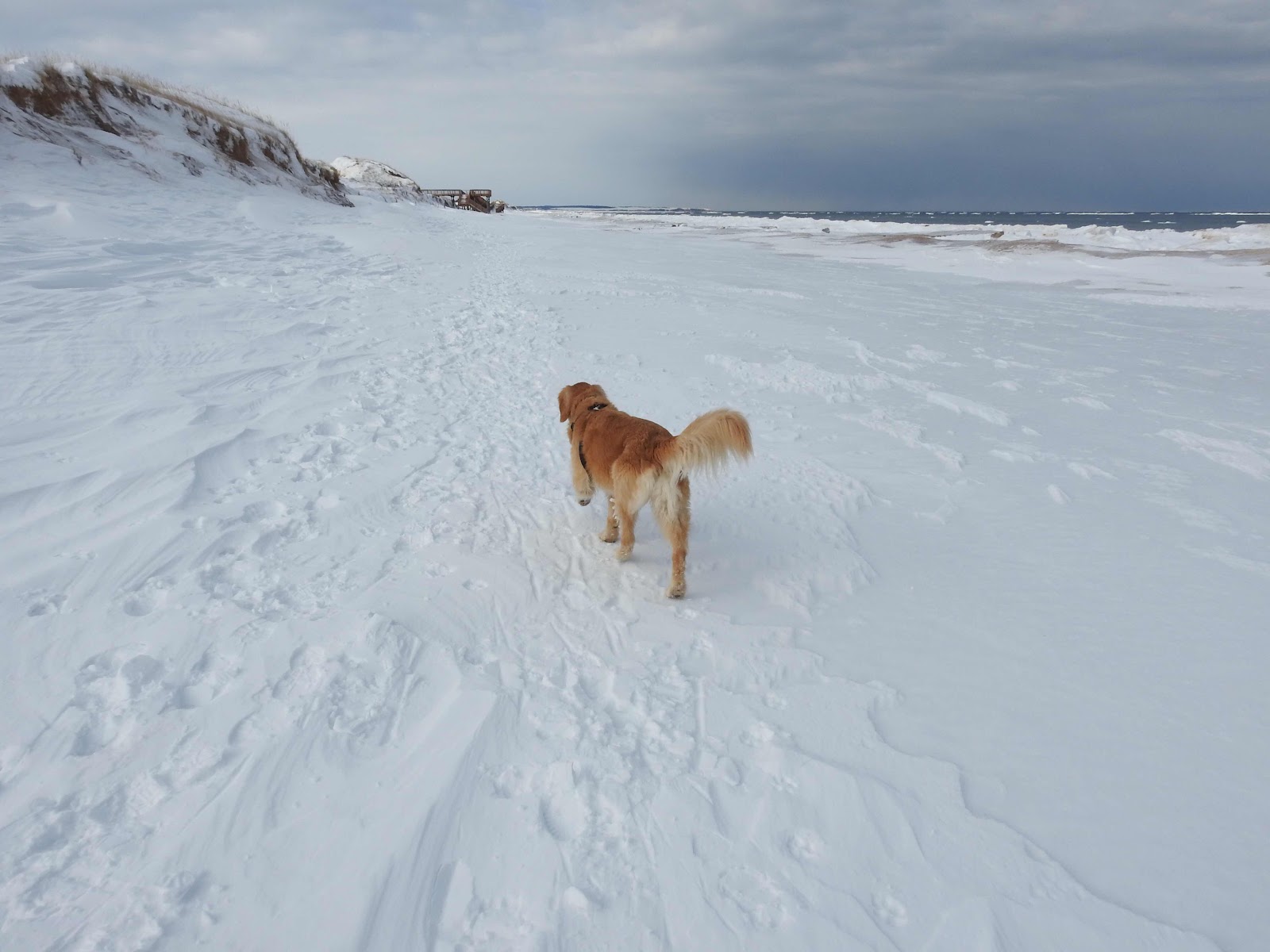 I heard a buzzing which sounded as if it came from the sand dunes. Above, a drone flew over the dunes as we watched. 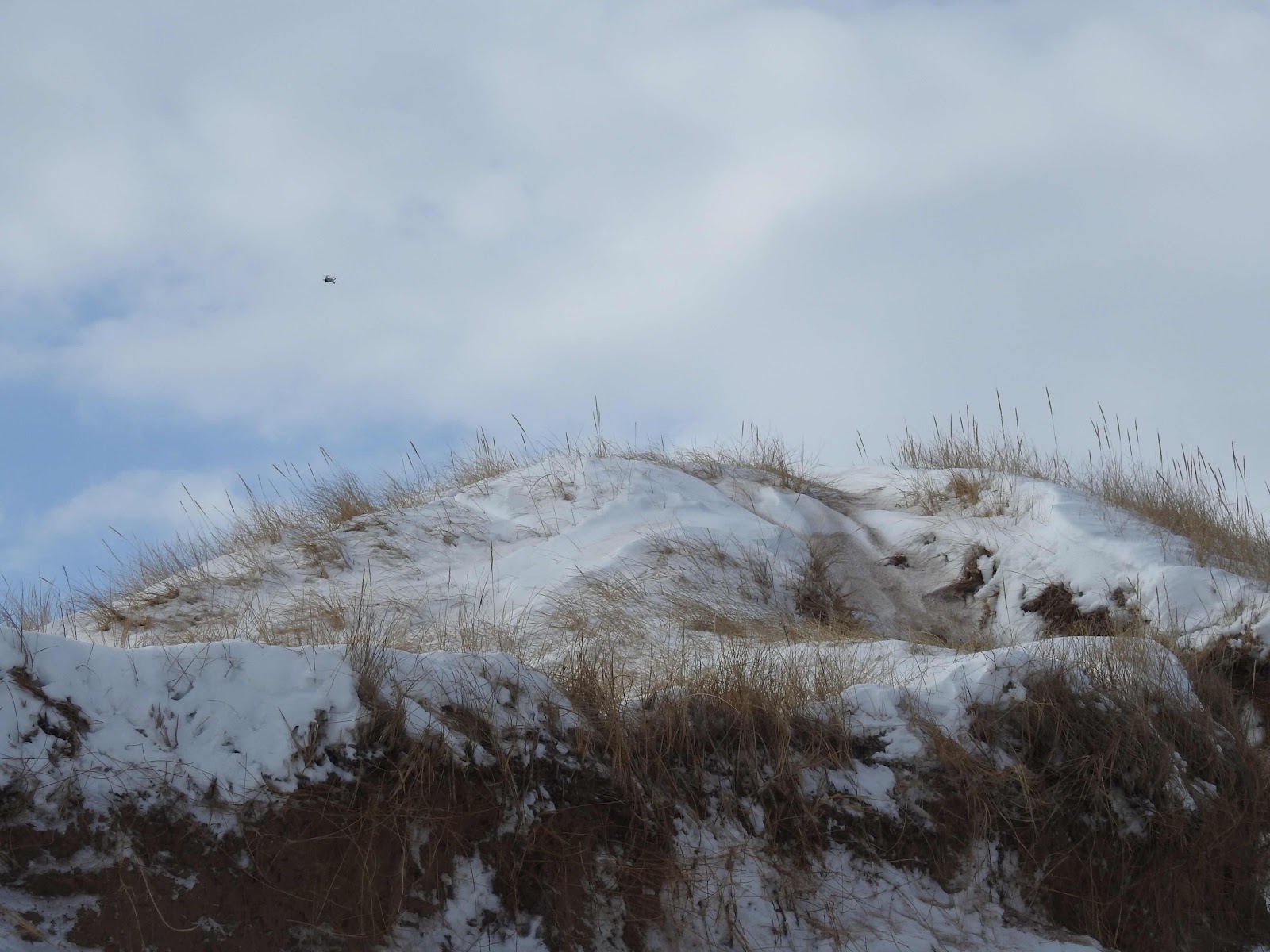 A drone looks like an insect above the dunes

A few minutes later, what I think was a juvenile bald eagle flew over, scanning the beach for lunch. The feathered flier was my favourite. 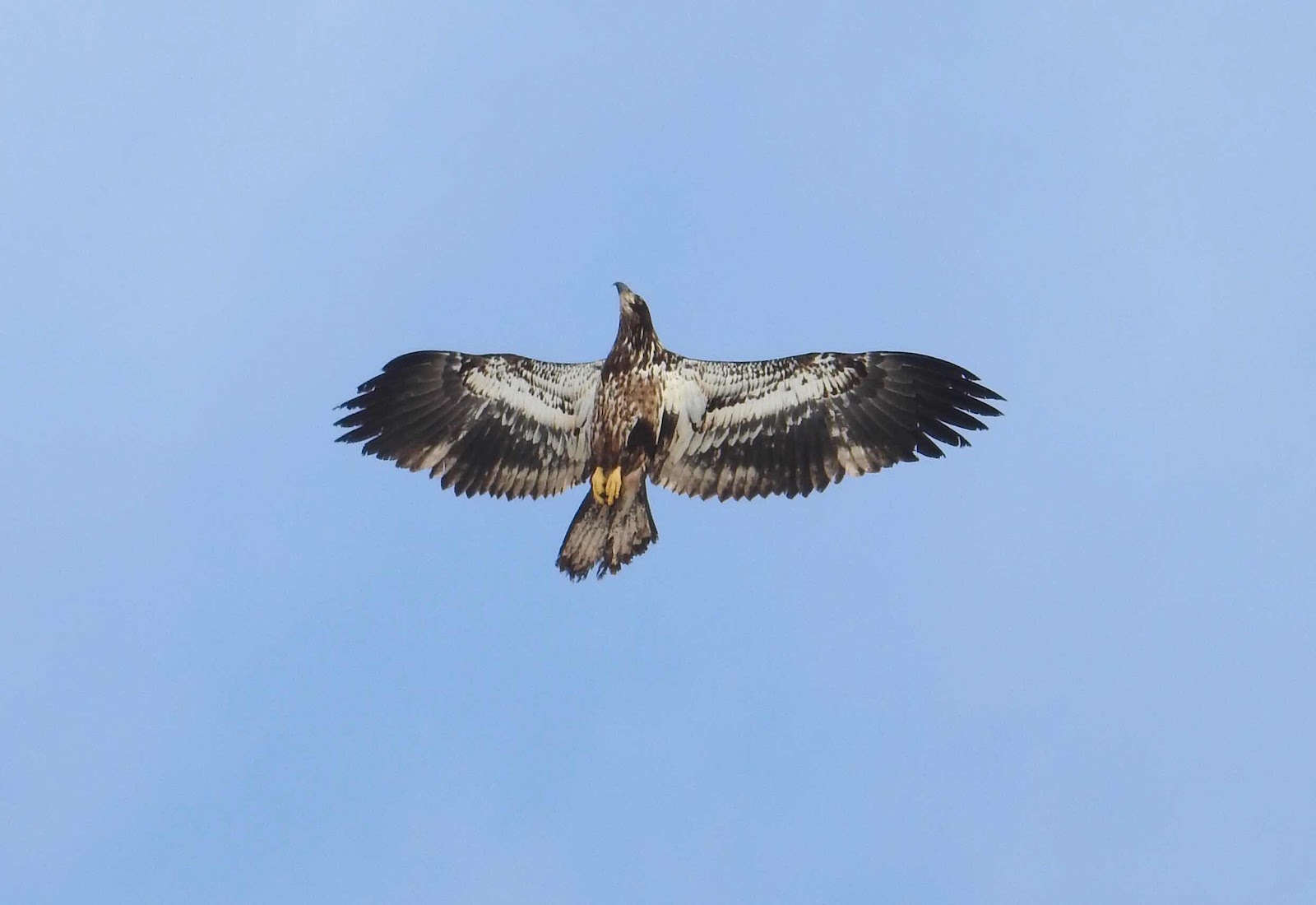 Off shore, pans of ice were visible in the distance. Unless we have consistently cold days for an extended period, the north shore will not ice up this year. So far this winter, we have a few cold days, then the temperature rises to hover near zero for a day or two. We have had a significant fall of ice pellets this year too which was unusual. Winter, as ever, is hard to predict.

Even at 2 degrees, looks darn chilly out there.

It looks wonderful out there, especially with Georgie and that gorgeous eagle showing off. Thank you for all your great pictures, Marie. :-)

Wow, I love your wintery photos...I have to admit I enjoy them from the warmth of my home though.
Gorgeous photo of the hawk too.

Maybe the eagle will bring down the drone :-) Have a good weekend Diane

Wonderfully moody. I've been on that beach in warmer weather.

Lovely scenes, but my favourite is also the feathered flyer. Right now we are waiting for the eagles to make their return north for the summer.

Beautiful pictures. Winter does not entice me outside, possibly excepting the eagle.

i have really missed having snow this winter!! beautiful pictures, the capture of the young eagle in outstanding!!

Oh, that is a great capture of the juvie...it is wonderful. I bet Georgie had a great walk.

It looks so beautiful. Amazing to see dunes snow-covered and frozen.

The beach in any weather is always magnificent.

I'd have enjoyed a walk like that as it would certainly make a change from the mud we have here. What is it about dogs and beaches? They seem to really come alive there.

Gorgeous beach, I love the dunes. Love the Bald Eagle and the cute Georgie photo. Enjoy your day, happy weekend!

Beautiful shot of the boardwalk disappearing into nowhere Marie 💙 It's so surreal for me to see sand dunes covered in snow! Living so close to the ocean I see sand dunes nearly every day, but as at the moment, under the scorching sun 😊

What wonderful shots, Marie. You have found colour everywhere. Yes, it has been an extremely open winter here, hasn't it?

Beautiful views!! Must be delightful to take walks around there. Georgie is a very enthusiastic companion! It still looks a bit cold though. We are covered in snow but with temps at 35 degrees Fahrenheit today. We get snow storms here in March. Keep warm!! Thank you for sharing the beauty of your surroundings!

Very pleasant walks even in the winter.... that's the beauty of this land.

No Way!!! What A Shot!! That Eagle Is Gorgeously Captured. And Love The Happy Dog Shot As Well.