The beauty of the scenes this time of year adds another dimension as the trees and shrubs stand against the worst nature has to offer. They hold their place while we mere mortals run for cover. These are some of the gems I see around the harbour.

It is hard to stand alone along the shoreline. The salt sea spray for the majority of the year assaults the trees. This solitaire is not big enough to be toppled by the wind which batters vegetation along the shoreline since it bends rather than breaks. 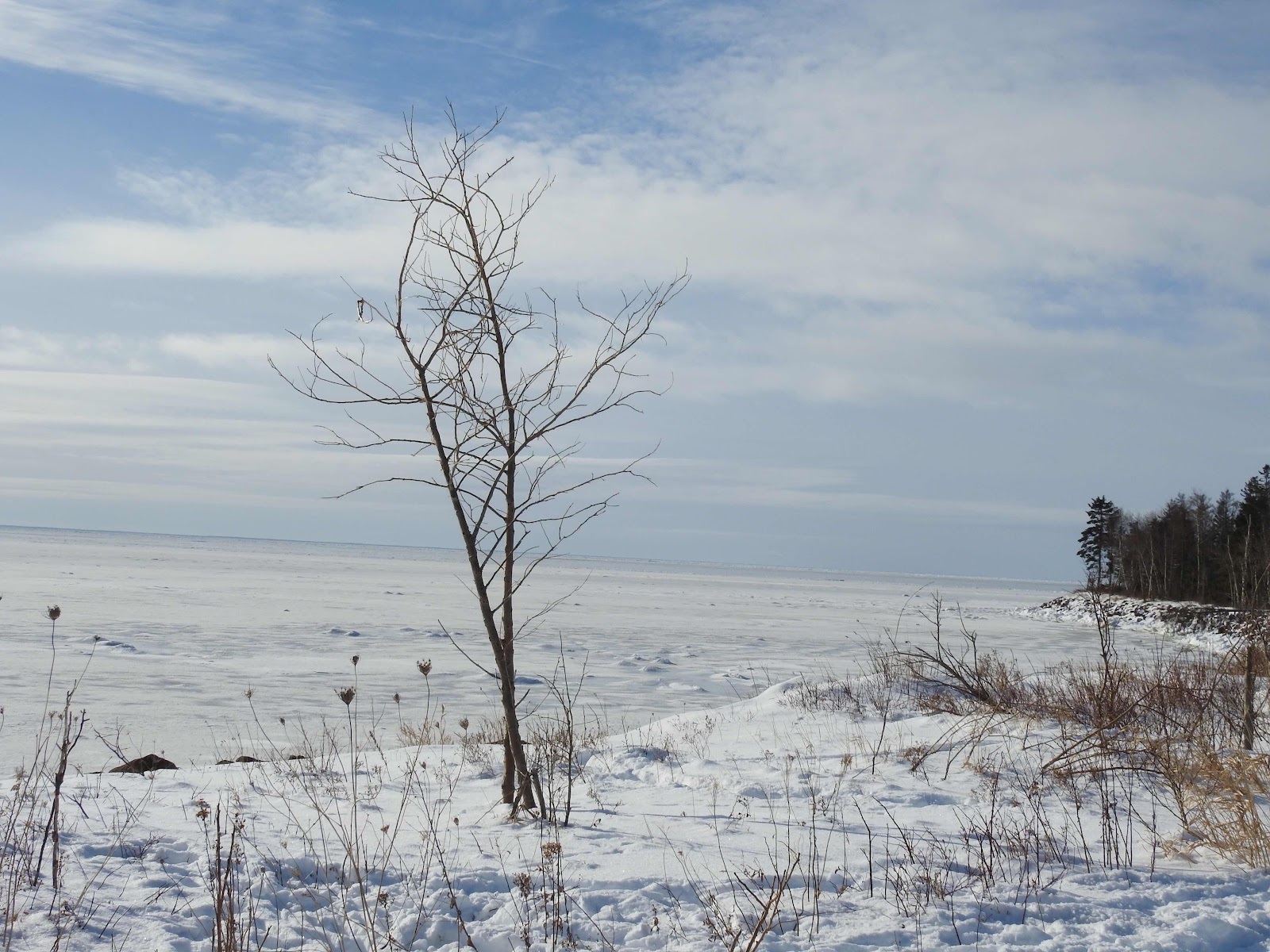 The perch is all that’s left of this tree which has succumbed to the elements where the stream empties into the harbour. Crows love this spot this time of year and in the summer, kingfishers avail of the location as they watch the stream for fish. 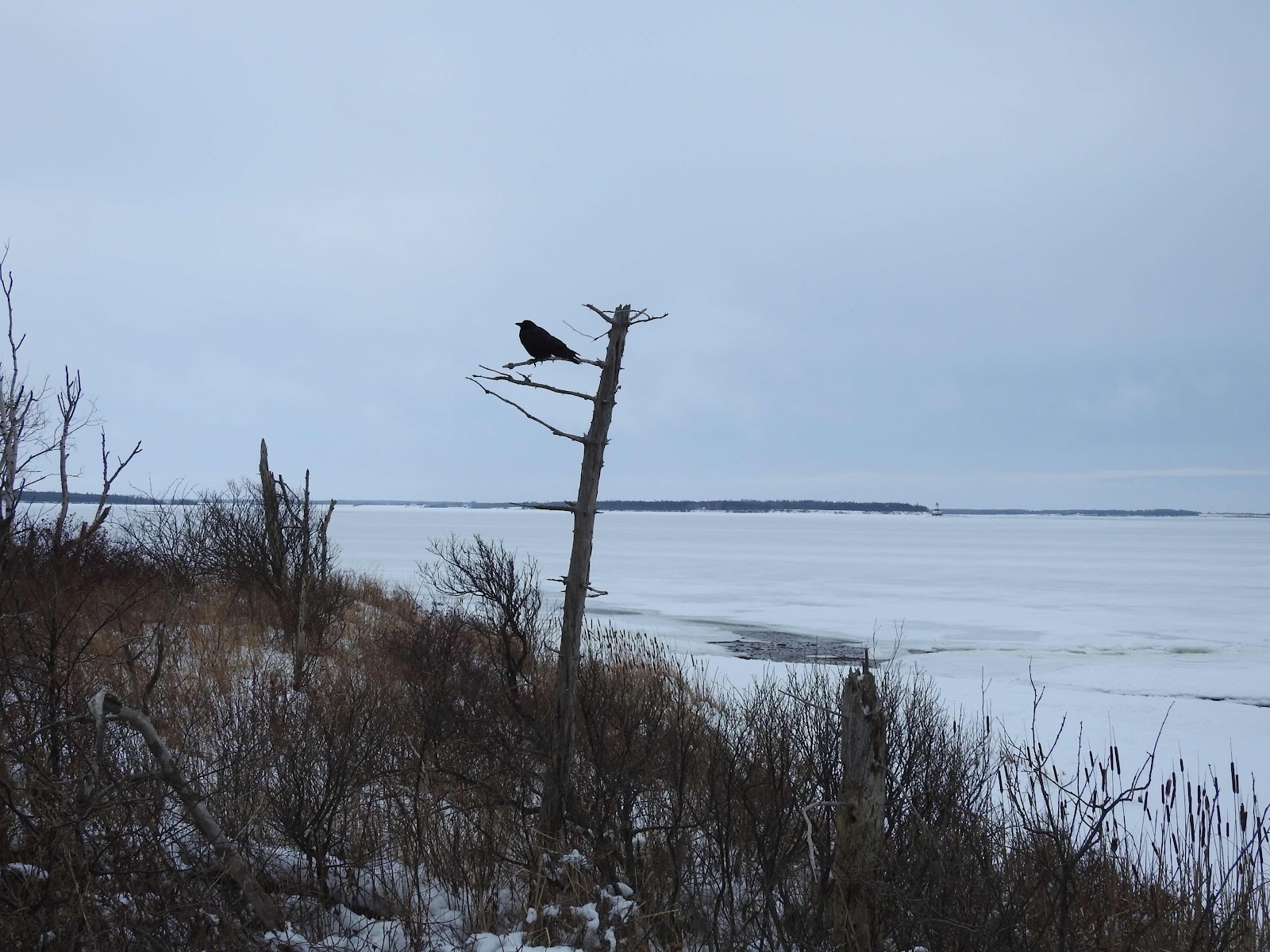 The top of this spruce tree above the reach of the salt spray is all that’s left of its coniferous needles. I suspect a gale will topple it soon. The two young trees at its base give us hope for the future. 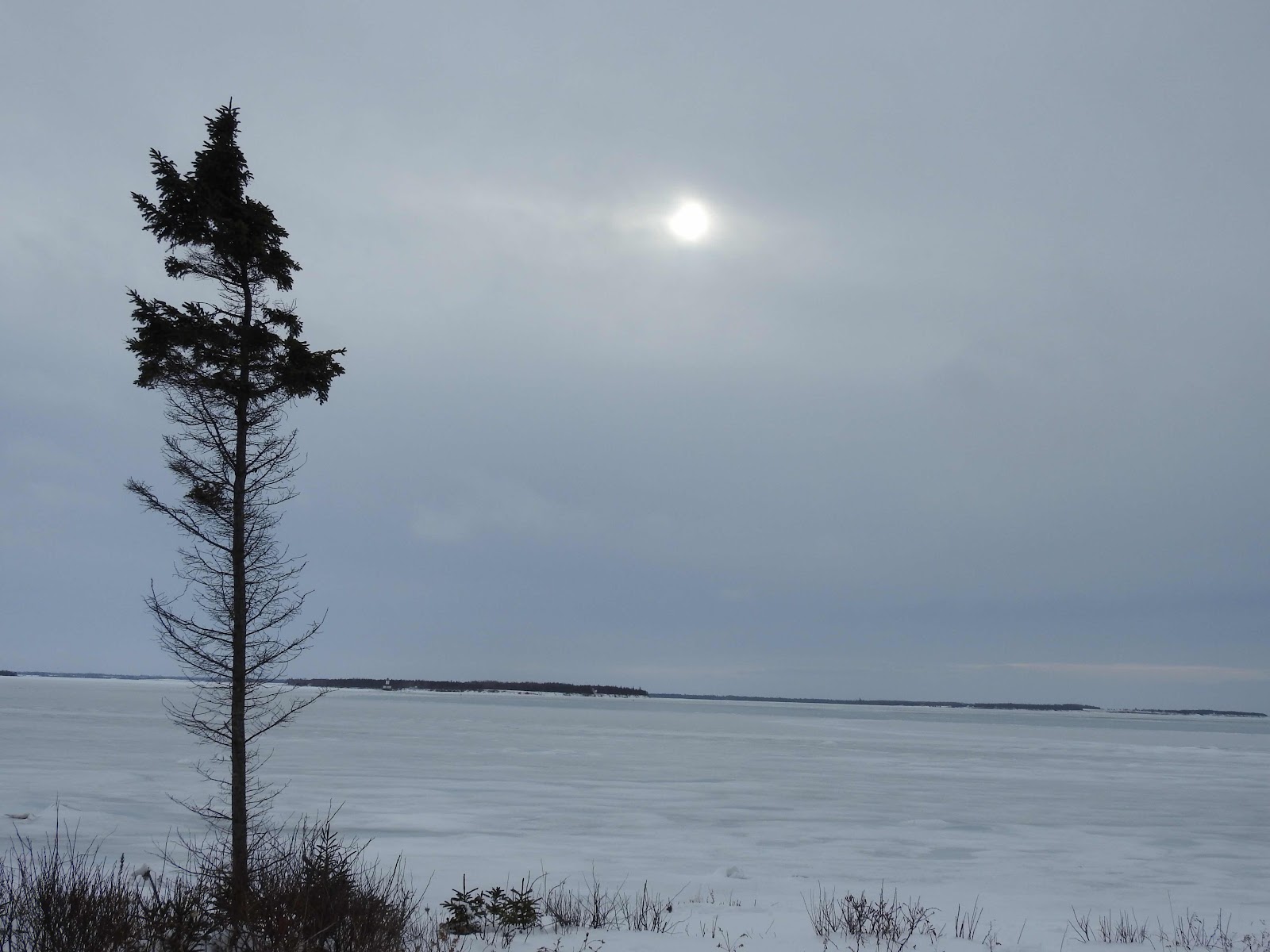 Rugosa bushes are tended along the boardwalk by the city staff. During the winter, they are interesting in their shape and spots of colour against the white plain. I have never seen birds eating the rose hips however. 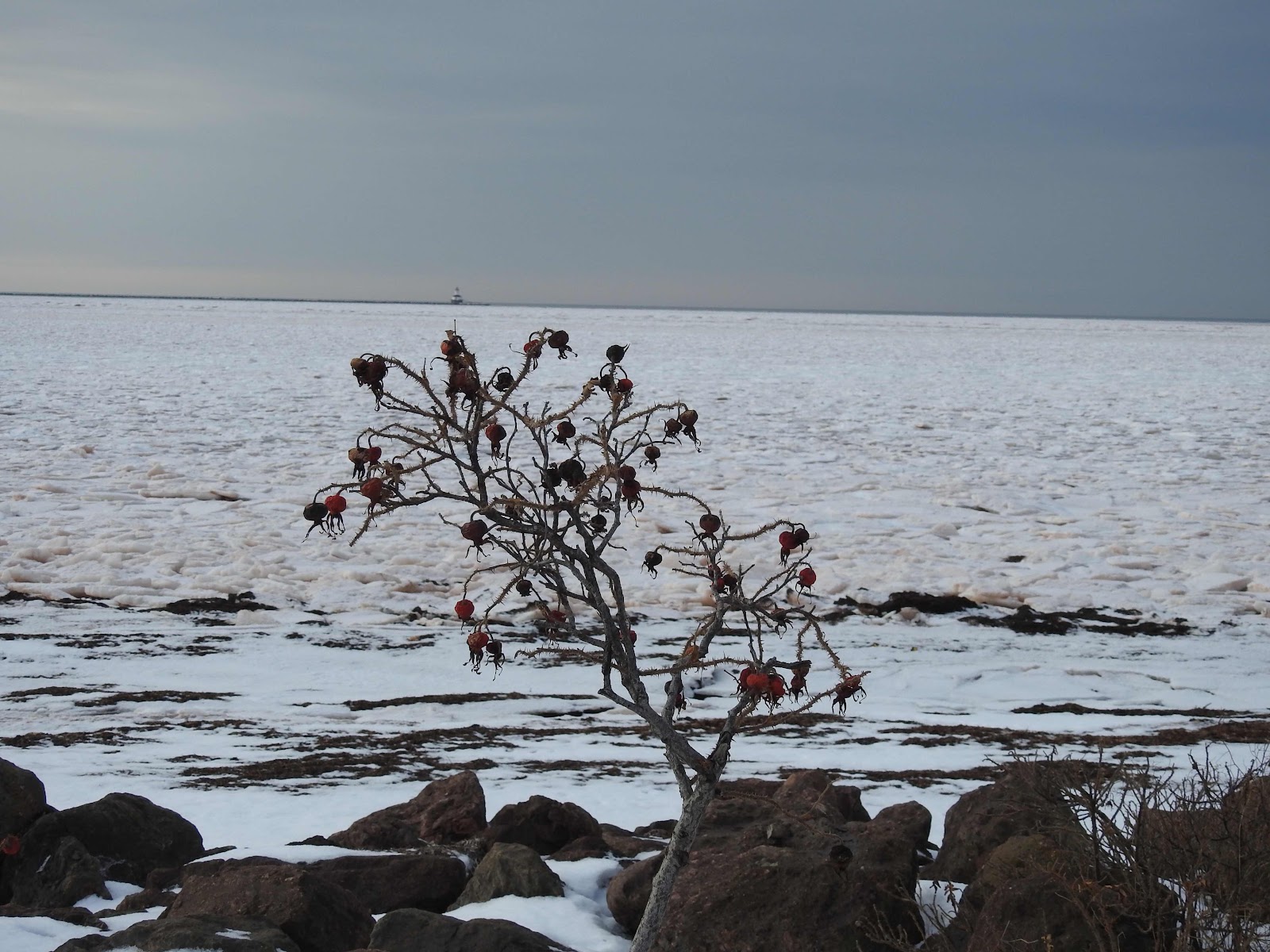 It looks like this bush has been trimmed and the branches have erupted in response, a circle shape which defies the injury. Its shape is highlighted by the frozen sea. 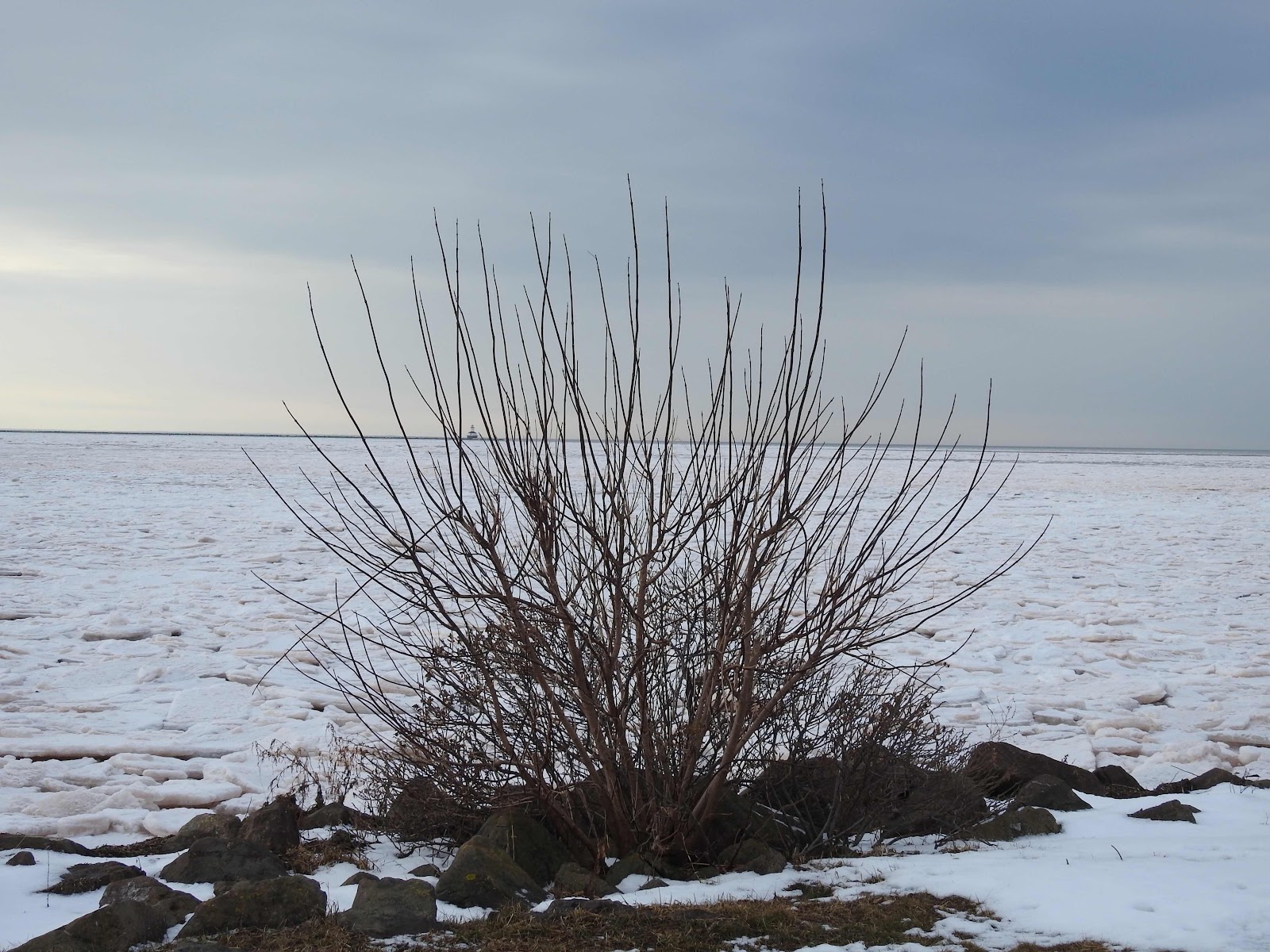 Posted by Marie Smith at 04:19
Email ThisBlogThis!Share to TwitterShare to FacebookShare to Pinterest

I love that shot of the crow on that poor decimated little twig-tree.

These pictures have captivated me!!
:)

I love your take on these bits of trees and bushes, Marie. You have a poet's soul. :-)

Hello, love the views of the sea, the trees and bushes. The beauty is everywhere. Wonderful post and photos. Enjoy your day!

oh i enjoyed this marie, the pictures are really beautiful. beauty really does defy the elements!!!

it was nice to read about the critters who call these trees home!!

A beautiful photo diary of an interesting day. I especially like the crow pic and your thoughts on the pine tree.

They stand out so well against the background.

What a great theme and images too.

These Are Beautiful - Winter As It Was Intended - Grey, Cold, And Desirable

Yet another post I love. From beginning to end.
DJan is right about your soul. And I thank you.

Very dramatic images. Nature can be hard on itself.

Lovely pictures and theme Marie. I loved the little bit of red thanks to the Rose Hips.

These seem so lonely....

It seems there is always beauty to be found in nature, even in inhospitable places, and you have captured it really well. The title "solitaire" is very apt :)

Ah the no warmth sun behind an icy sky. But still it is light.

I really enjoyed reading this post. You demonstrated the simplicity of nature and photography in a very effective way. It gives me ideas of a new approach for my own material.

Beautiful series of winter scenes Marie, thank heavens for the strength and endurance of trees.. most of the time ✨

Trees along a shoreline need to be hardy for sure. And snags do make great perches for kingfishers!

All the pictures say one word - Winter!

Beautiful photos Marie!! I like how you narrate about your surroundings. Lovely places you have there for walks and exploring.

I love that last shot with the trimmed tree against the frozen water. The tree/bush looks like an alien creature on a frozen planet.

reminded me bare branches of tree in winter season back in my native town ,it was hard to move eyes from such sublime sights
bare branches beaded with crows and barren paths would seem fantasy to me