They dot the countryside, these old buildings, once places of congregation where people prayed and sang hymns of praise for all the big occasions in life and the times between. Now they are decommissioned and up for sale, some bought and repurposed, others left to disintegrate. This is possibly the fate of the old church on a country road west of our city. 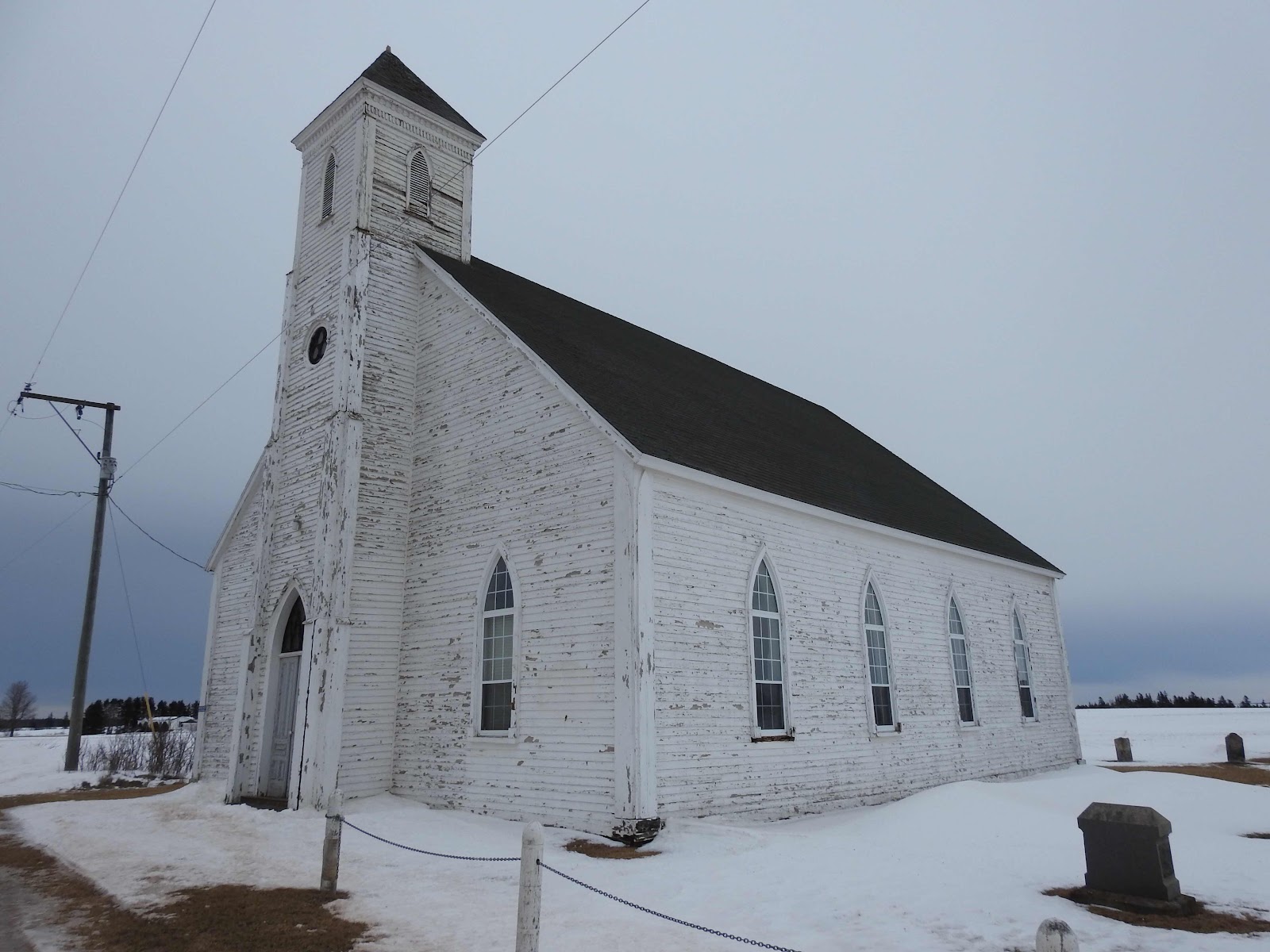 It is slowly falling apart, peeling paint and rotting boards, 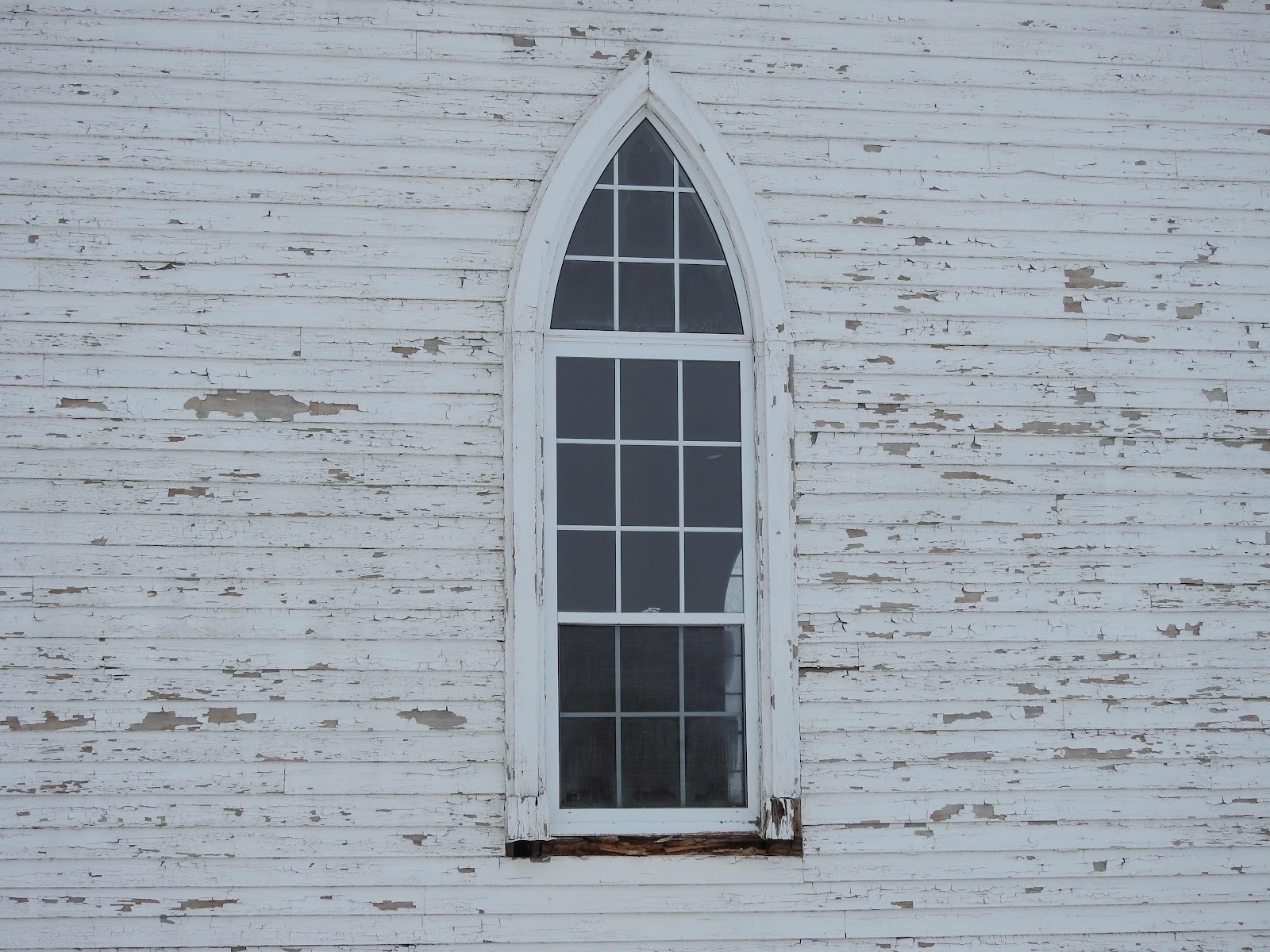 without a time of service posted or even a name. There is nothing welcoming about this building. Former congregants, having passed to their eternal rest, fill the yard, the old headstones doing the best they can to stand vigil. 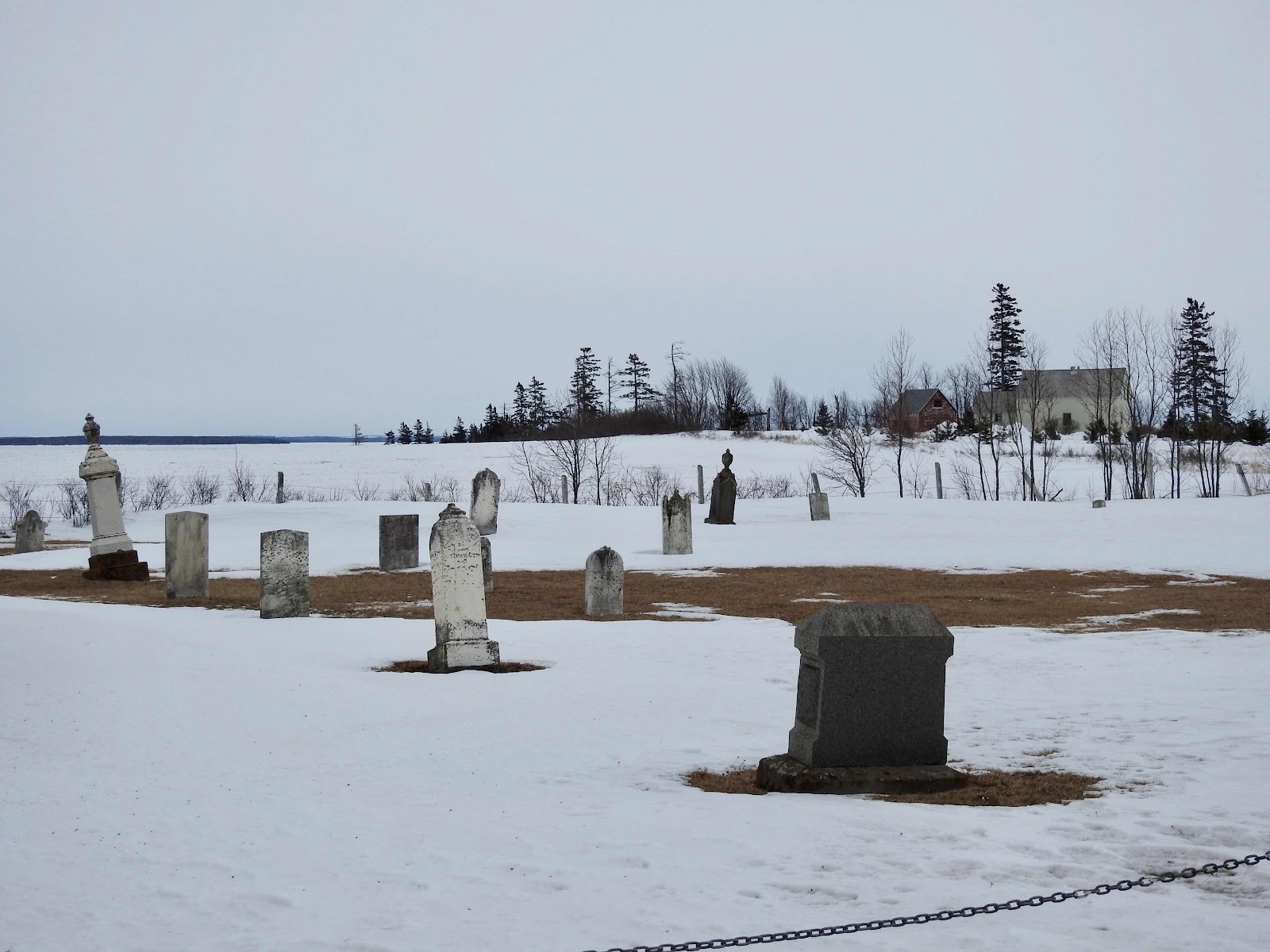 Someone has placed the fallen ones to lean against the walls. On this cold day in February, as I walk around the building and through the cemetery, the silence and cold envelop me like a shroud. 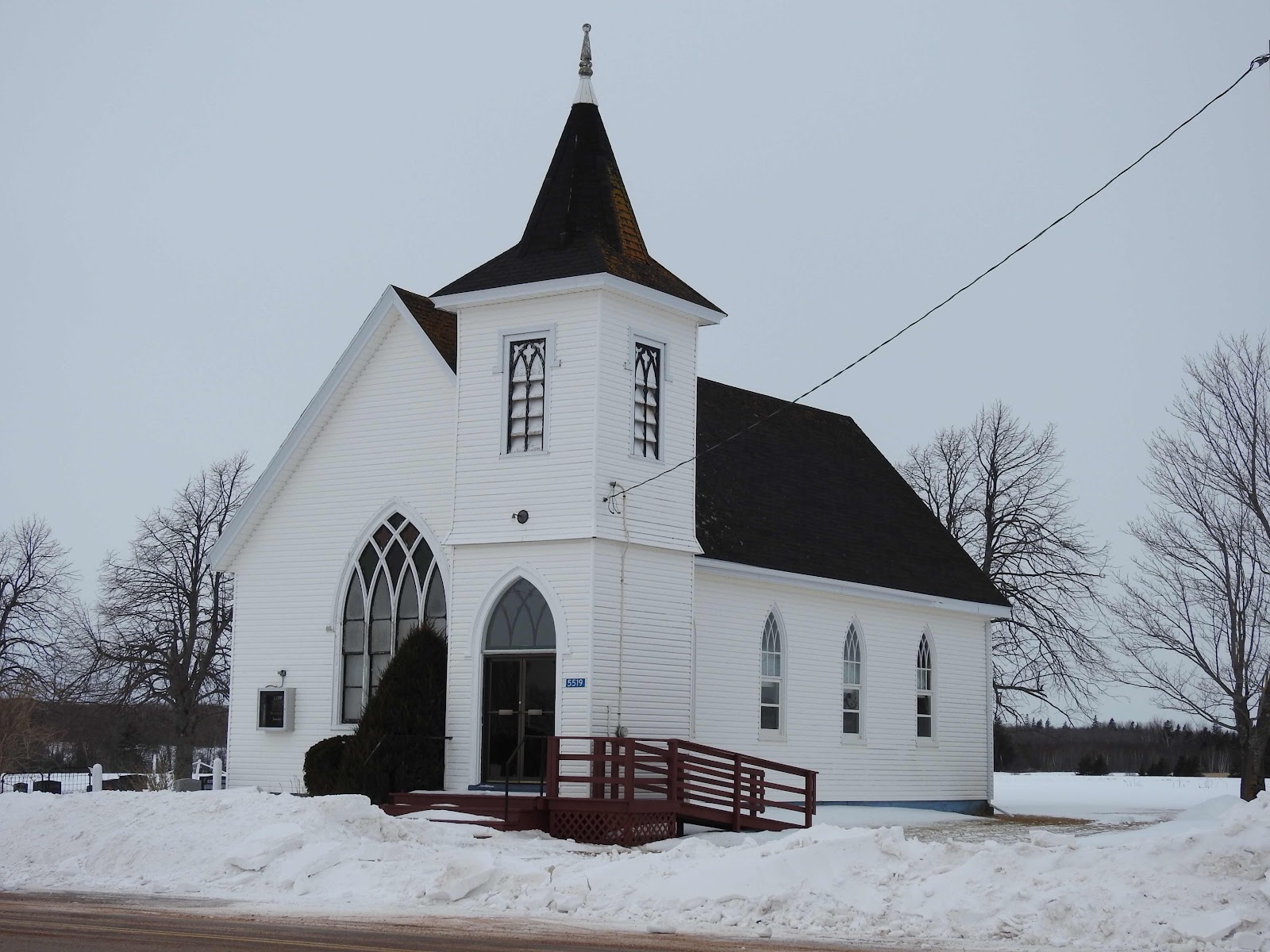 Meanwhile the older building is crumbling.

Behind the church, among more headstones, three white birds which looked like Willow ptarmigan, flew off as I approached. We surprised each other. 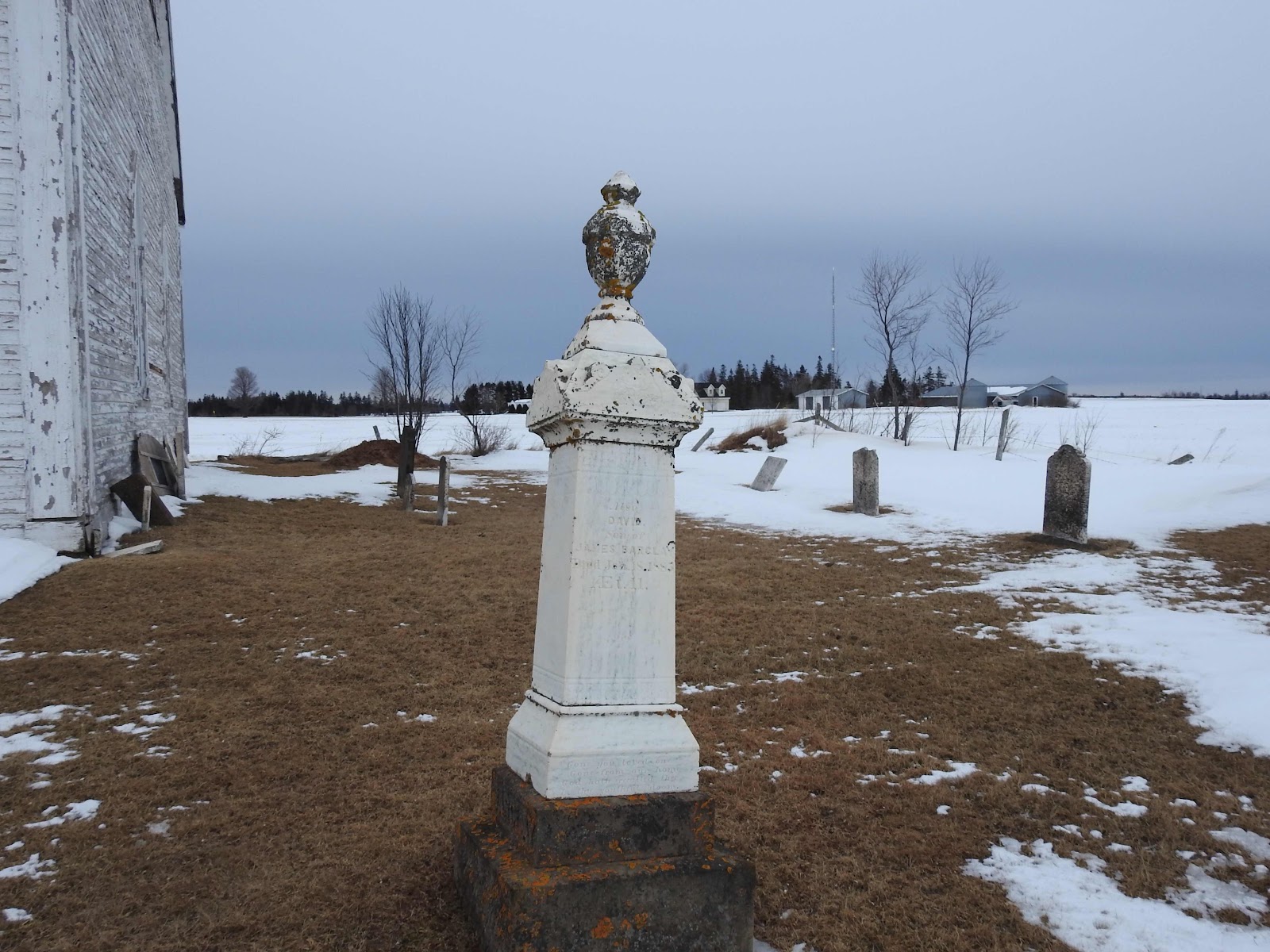 However it was not surprising but somehow fitting to see such beautiful white creatures here among the ruins.

I wonder if these ghosts are holy?

I'm glad to know there is a church in use, even while the other deteriorates. You write so eloquently about the ghosts of an earlier era. Thank you, Marie.:-)

Yes, what a contrast between old and new!

Despite not being a church goer I find disused churches (particularly those with graveyards) sad. It is good to know that there is another church nearby.

i know the churches are in disrepair, but i still find them to be beautiful!! it would be wonderful if a congregation needed a home and settled in one of these and fixed it up!!

Gorgeous photos but oh that picture of the old church makes me so sad.
I hate seeing it crumbling and aching in the cold silence of the winter day.
I do love to wander around in old cemeteries.
What history there is among those headstones.
I do hope they will remain.

Those two churches look as though they were carbon copies of one another. I find those abandoned buildings sad too. When I was a child we used to camp in Eastern Oregon and the abandoned farm and ranch houses, many from before 1900, would occupy my imagination for days. Who lived there, why did they leave, where did they go? So many stories blowing in the wind.

The white church is beautiful, I love finding these old cemeteries. Why built the new church and leave the other abandoned, it is sad.
Have a great day and a happy new week!

Always so sad to see an old building in disrepair. I am glad that France, in general, is quite good at renovations. Have a good week, Diane

I love the shape of these old churches. They looked like a church, not like many today which could be anything. I know, it's not the shape of a building that matters, but I still like these older looks.

Lack of funds... I suppose.

Something good will come of it.

These old buildings are great - I also think the footpaths that no longer go anywhere are also ghosts.

To the best of my knowledge, Marie, there are no Willow Ptarmigans on PEI.

Oh that's so sad Marie, I wish so much that they had found another use for this lovely old church ✨

I always think it is so sad to see buildings and homes abandoned and unloved. It was a lovely place in its day.

Thanks for your comments on my blog yesterday. We have the same thing around here, but most get bought for residences. I wonder a lot about the stories of the others.

That is sad to see.

These sad old buildings are so romantic to look at in a melancholy sort of way, but I would much rather see them being cared for and a use found for them. Maybe someone will fall in love with this old church one day and give it a new life.

it is sad how once flourished life to it's fullest are ruins now ,nature's work are astonishing and reveal secrets of her cruelly

I don't know how I have missed these recent posts...normally I check your blog every day. It is such a shame to see these old buildings going uncared for. But maybe too expensive for someone to keep up.