The most easterly point in North America, Cape Spear with its lighthouse, wasn’t far from my childhood home. However my mother lived even closer to the Cape when she was young and she visited there often and stayed at the lighthouse. Her parents were friends of the light keeper and his family.

You can see Cape Spear here.

Over the years when my husband and I travelled to St. John’s to visit my family, Mom and I often visited Cape Spear to sit and watch the waves or go for a walk if the weather permitted. The Cape is one of my favourite places on earth. My love of lighthouses comes from my mother’s stories of Cape Spear and my own experiences there. Now we live on Prince Edward Island where there are also many lighthouses so my husband and I have visited a number of them.

There are four lighthouses left on Prince Edward Island which have the light keeper’s residence attached to them. We wanted to see all four and made the rounds this summer.

One of these lighthouses we visit often in New London at the base of Yankee Hill. The lighthouse is tucked behind the sand dunes and though it looks small from the beach, it is more impressive when you stand beside it. It was the home and workplace of the first female light keeper in Canada, Maisie Adams. 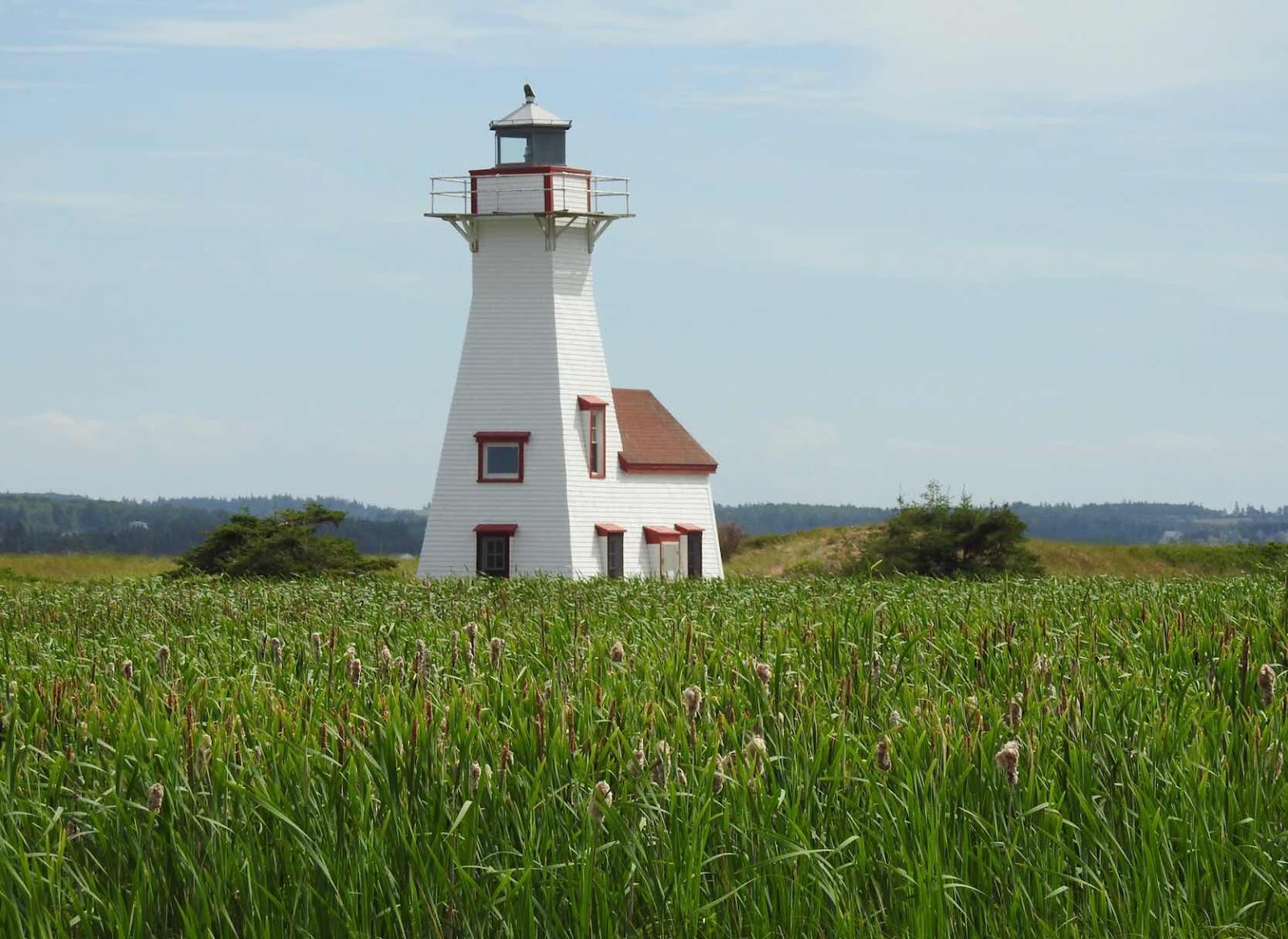 Not far from New London is North Rustico on the north shore of the island with its lighthouse down by the water at the entrance to the harbour. Here the shoreline is reinforced to prevent erosion around a building which already has been moved several times to prevent it from disappearing into the sea. It was built in 1876 for a cost of $1700.00. It presently sits in a busy part of the community near homes and businesses as it casts a shadow over the boats passing by. 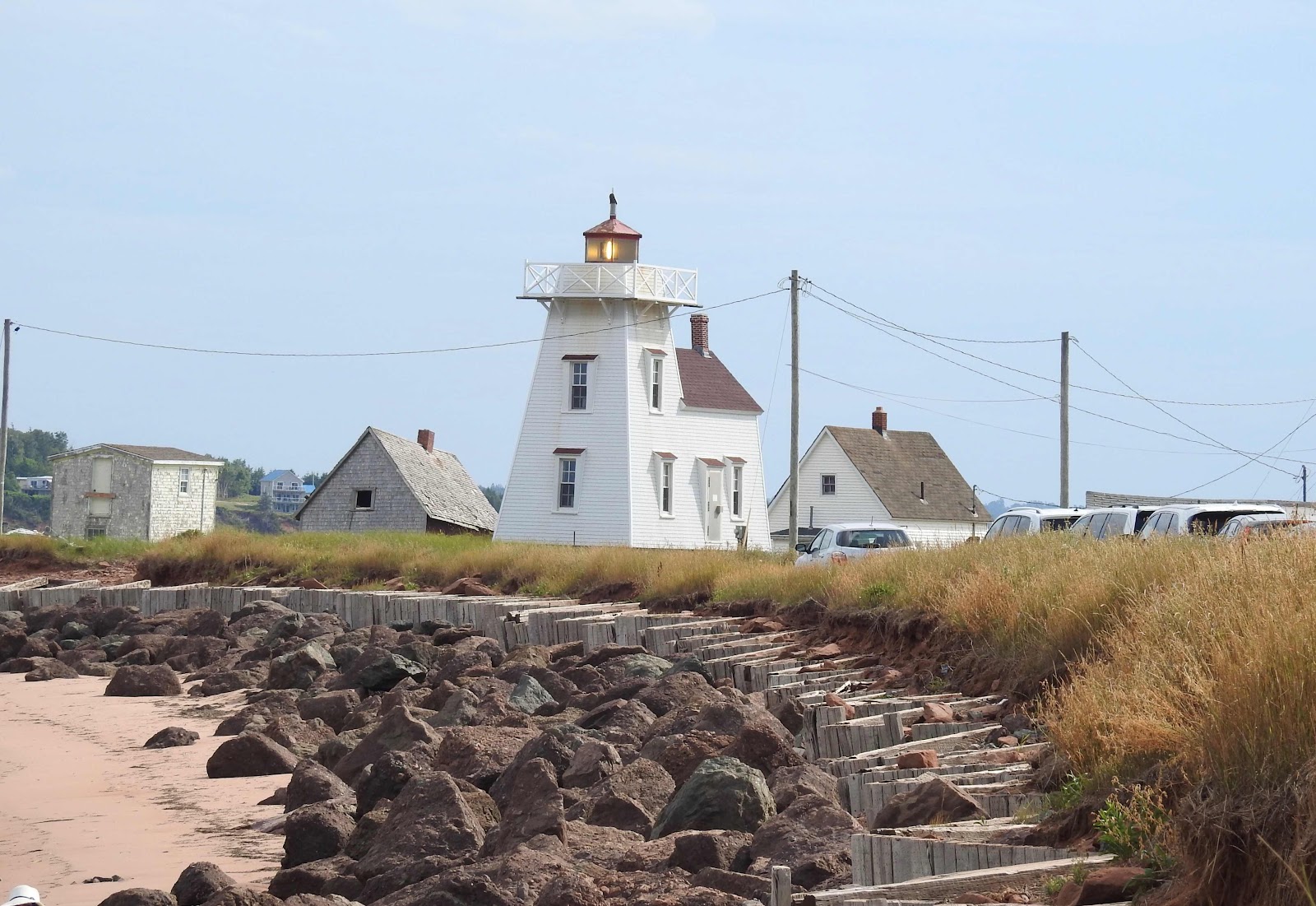 On the southern shore of the island at Rocky Point, across the harbour from Charlottetown, the capital city of Prince Edward Island, the Blockhouse Point lighthouse is one of the largest lighthouses on the island. This structure was built in 1876 but the original light in the area was established in 1846. This area was frequented by the original settlers on the island, the Mi’kmaq, and later, the French and the English in the 1700s. 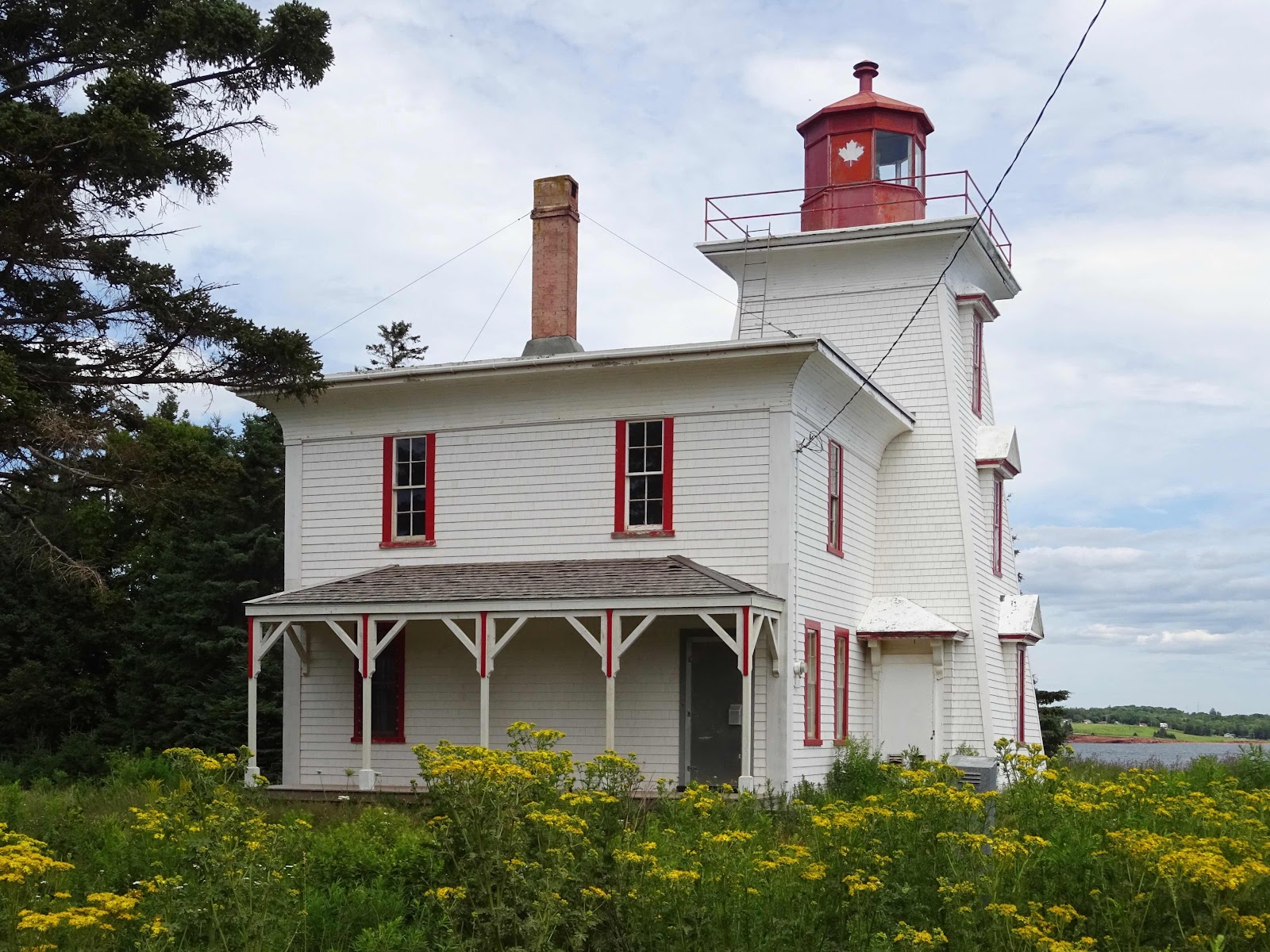 The final of the four surviving lighthouses with houses attached is at Wood Islands. We recently visited this structure at the southern most point of the island, near the Northumberland ferry terminal. The lighthouse has been moved 150 metres from its original position due to the threat of erosion. It has eight rooms and construction was finished in 1876. 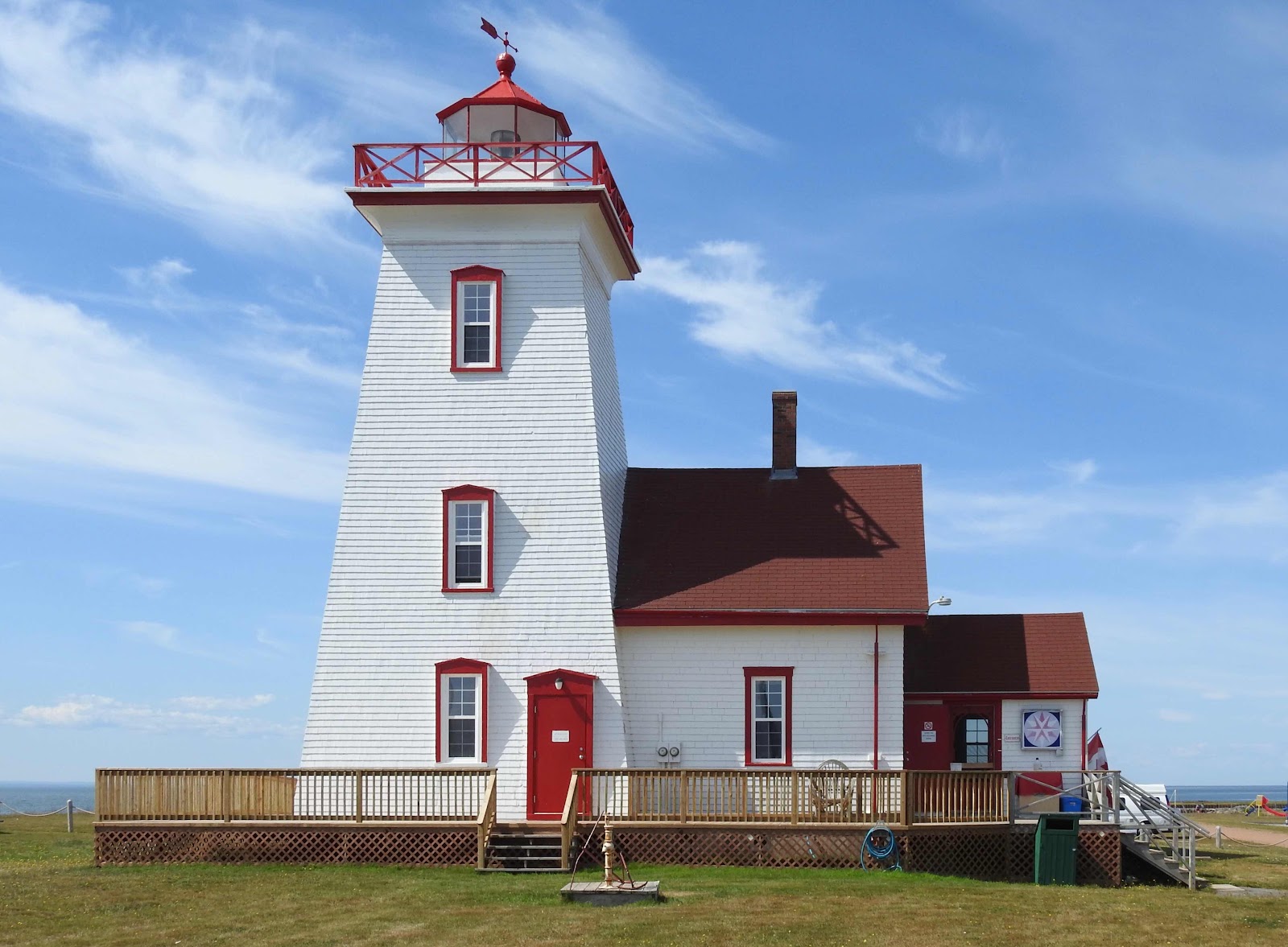 These lighthouses are automated today and the one at Wood Islands is open to the public. It is well worth a visit.

The Blockhouse Point lighthouse seems to have fairly spacious living quarters, but I may like the last one best.

They are beautiful lighthouses, I would like to take a road trip and just visit all the lighthouses. I have heard of some lighthouses you can stay in like a B&B. Wonderful post and photos. Enjoy your day, have a great new week!

I also would love to visit these places. It seems magical to think of living in one of them. Thank you so much for sharing these lovely lighthouses. :-)

Who wouldn't want to live in a lighthouse?

I just finished reading about Maisie. We all just do what we have to do, don't we? She certainly had her hands full. PEI keeps their lighthouses in tip top shape. They are lovely.

On another note, I enjoy reading The Buddha Diaries by Peter. He's interesting, smart and his spiritual take on things is fascinating. I also enjoy getting to know another side of you in your responses. Blogging is such a fun pastime.

I just love all the lighthouses, so beautiful. I would love to be able to visit all of them!

I've enjoyed visiting quite a few light houses here around the Great Lakes.

I live on the east coast of the US and have visited lighthouses as far south as the Carolinas. My son when young loved climbing up the endless spiral staircases. I was less so, and had to sit down once back on land, to recover my balance! They're beautiful structures and they all seem to come with stories.

wow such great photoes!!Love the lighthouse!

wonder what camera and lenses you use?

Wish you a great Monday!

I love lighthouses. We have some nice ones in North Carolina, but would love to visit your area and see these. Thanks for sharing the photos.

Those lighthouses are beautiful. When my daughter was small, we camped along the coast of Oregon and visited all the lighthouses. It was a great experience.

Oh, I love lighthouses.
I have only been to two but i think they are magical and a wonderful link to the historic past.
Thanks for giving me a tour of your beautiful Island.
It's on my bucket list...
Sue

Each of these is charming in it's own way. Since I don't see lighthouses, I am thrilled to see them on your blog.

DEFINITELY well worth a visit. I envy you.
Seeing them 'in the community' was a bit of a shock though. My romantic self thinks of them in isolation...

Love them all. Only 59 left for you to share with us.

Marie...I so loved seeing these. They are so beautiful. I sure wish I could see them in person.

I've never visited a lighthouse but I would compare it to a forestry tower.

Thank you. I, too, have a life long interest in light houses, their purpose. It started with a Bobbsey Twins book.

Love lighthouses, they are so fascinating. The ones you show all seem to have a similar distinctive style, quite different to ones here which are often circular in shape.

I have never known anyone to say nay to lighthouses. Why are they so interesting? And loved? I suppose there are many answers. Thank you for these photos.

these places seems fascinating ,like they are from fairy tales :)

such a lovely sharing dear Marie ,specially i loved knowing about your childhood love for lighthouse familiar to your mom

how amazing to have such beautiful memories and how wonderful to have four lighthouse near you :)

these images and your words both are CAPTIVATING
thank you for incredibly exquisite blogging my poet friend !
more blessings to your world !

Oh my gosh I'm in lighthouse heaven, how fabulous they all are and without a doubt they would be top of my list to visit. I'm fascinated by the lighthouses with living accommodation attached, I haven't seen anything like that here. So beautifully shown here, merci beaucoup Marie 💜💙

Lovely !lighthouses. I found the design interesting. The tower and house meld together without each being a separate unit only connected by a passage. And the towers are unique in their design compared to lighthouses here in the States. Thanks for the pictures and info. I just read more about Maggie.💖

Lighthouses are always special. I have been inside one, I recall, but I don't remember where. This memory of mine...

there's something very romantic about lighthouses. However on the only occasion that I ever stayed in one the foghorn was sounding every few minutes throughout the night which somewhat spoiled the peace and quiet!

what wonderful childhood memories, you are lucky to have them!! i am a lighthouse lover and because of where i live, there are so many for us to visit. we don't visit them often enough!!

Oh how I'd love to be able to visit them ... but I guess I'll have to settle for your wonderful write-ups and pictures. Thanks marie.

Such an interesting post. I don't think I ever visited a lighthouse, but my adult kids were at the shore this weekend and said they drove to visit a lighthouse .

Beautiful lighthouses. I like what they symbolize - light to guide to safety. We visited the East Point lighthouse when we were in PEI several years ago.

Just beautiful. The one lighthouse near us is an often photographed building for me. I just finished playing with the composition of the latest shot this morning.

I do love lighthouses and those are beautiful.

I have a thing for lighthouses too. I'd love to see these for myself!

I love light houses. There are several nice ones on the Washington/Oregon coast, but not as impressive as these.