Birds of the shoreline

Most of our walking this summer has been along the boardwalk in Summerside. As July slipped into August, the migratory birds were feeding along the shoreline. Low tide was the best time to see them.

A Spotted Sandpiper was perched on a rock looking south. I wonder if it was pondering the journey ahead. 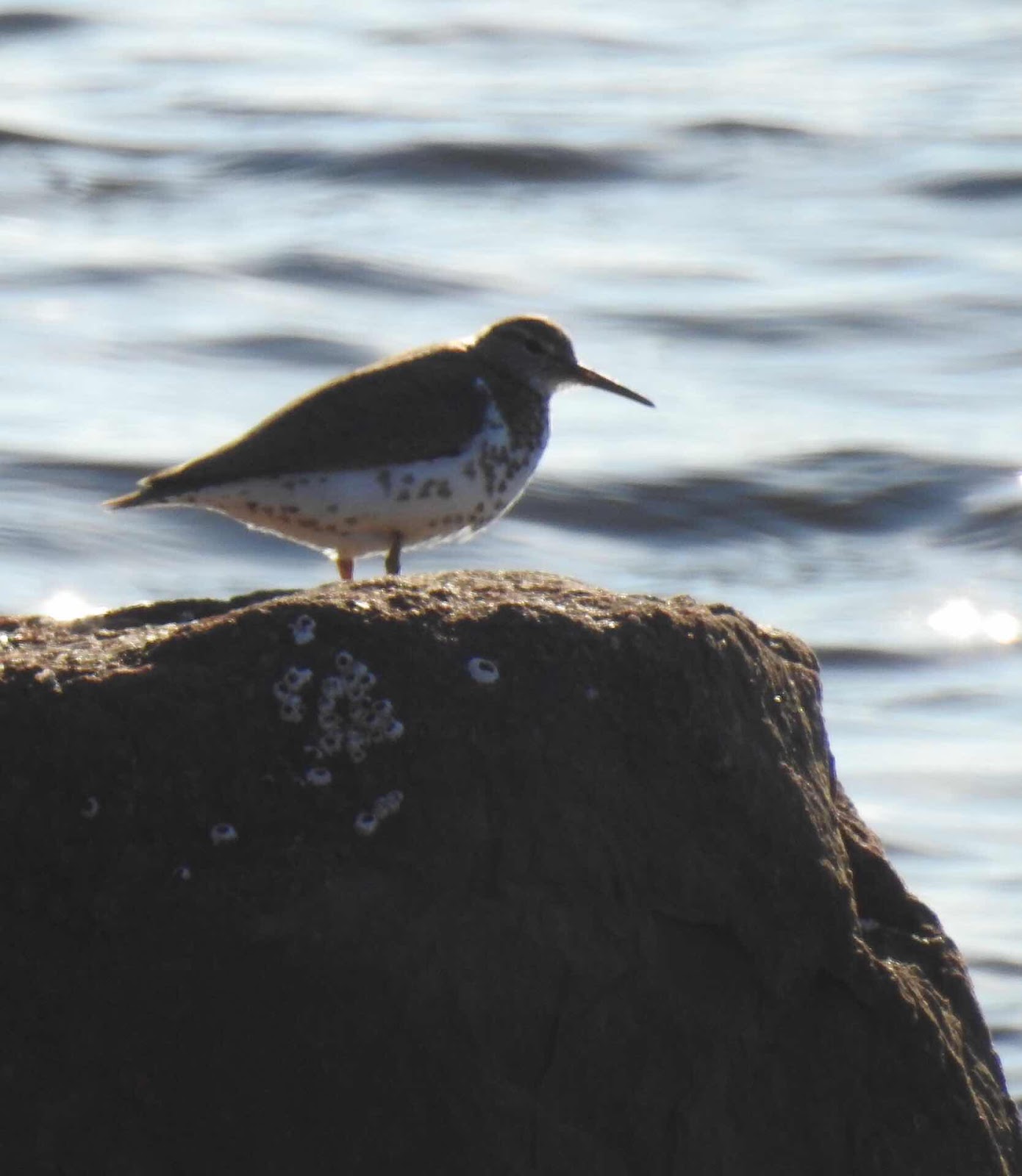 This Solitary Sandpiper stood on an island in the salt marsh. 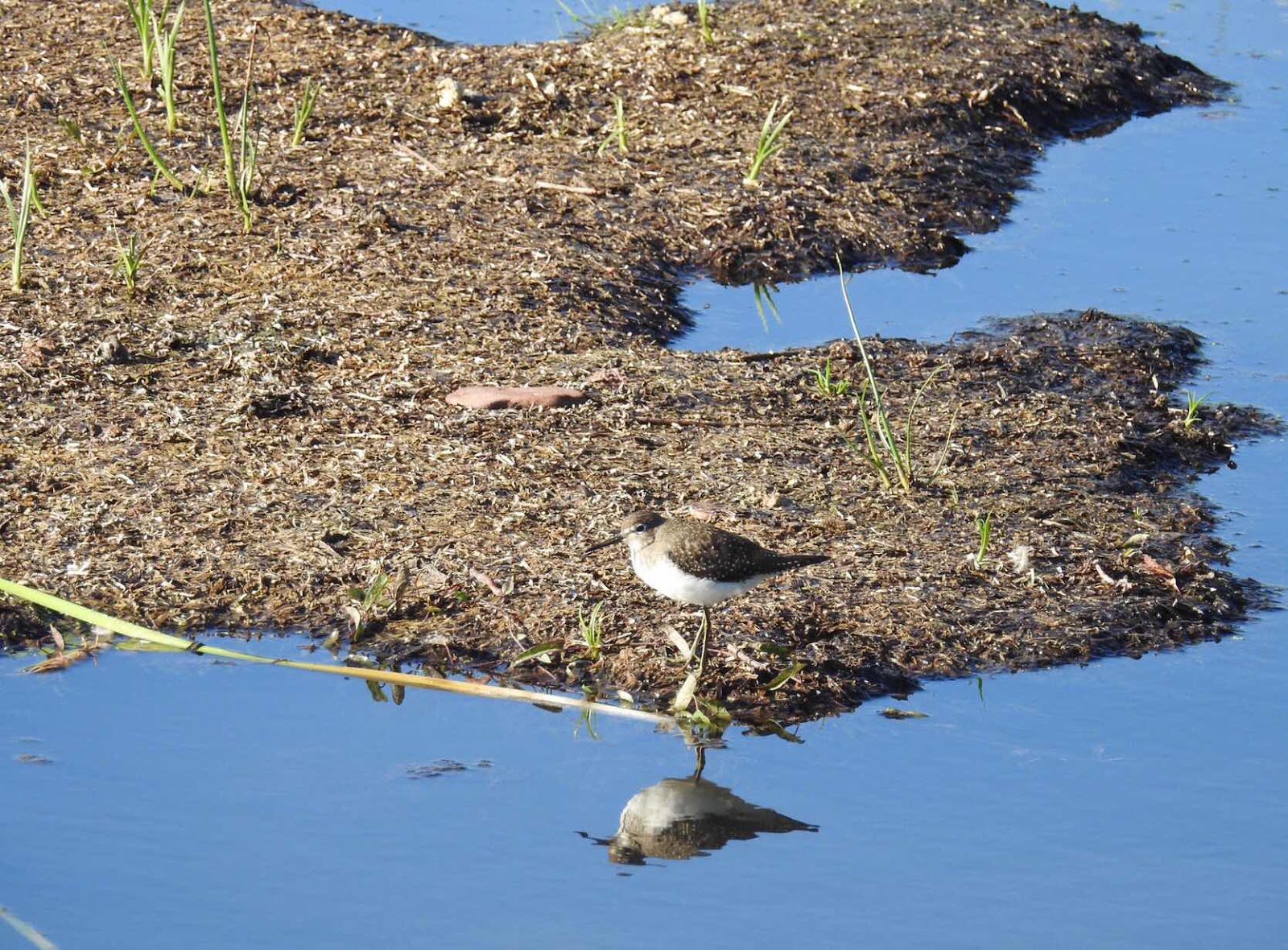 Contrary to its name, it had a buddy there too and they flew off together.

These tiny birds were visible along the shoreline for a few days. The Semipalmated Sandpipers blend in so well with the shoreline, they are difficult to see. 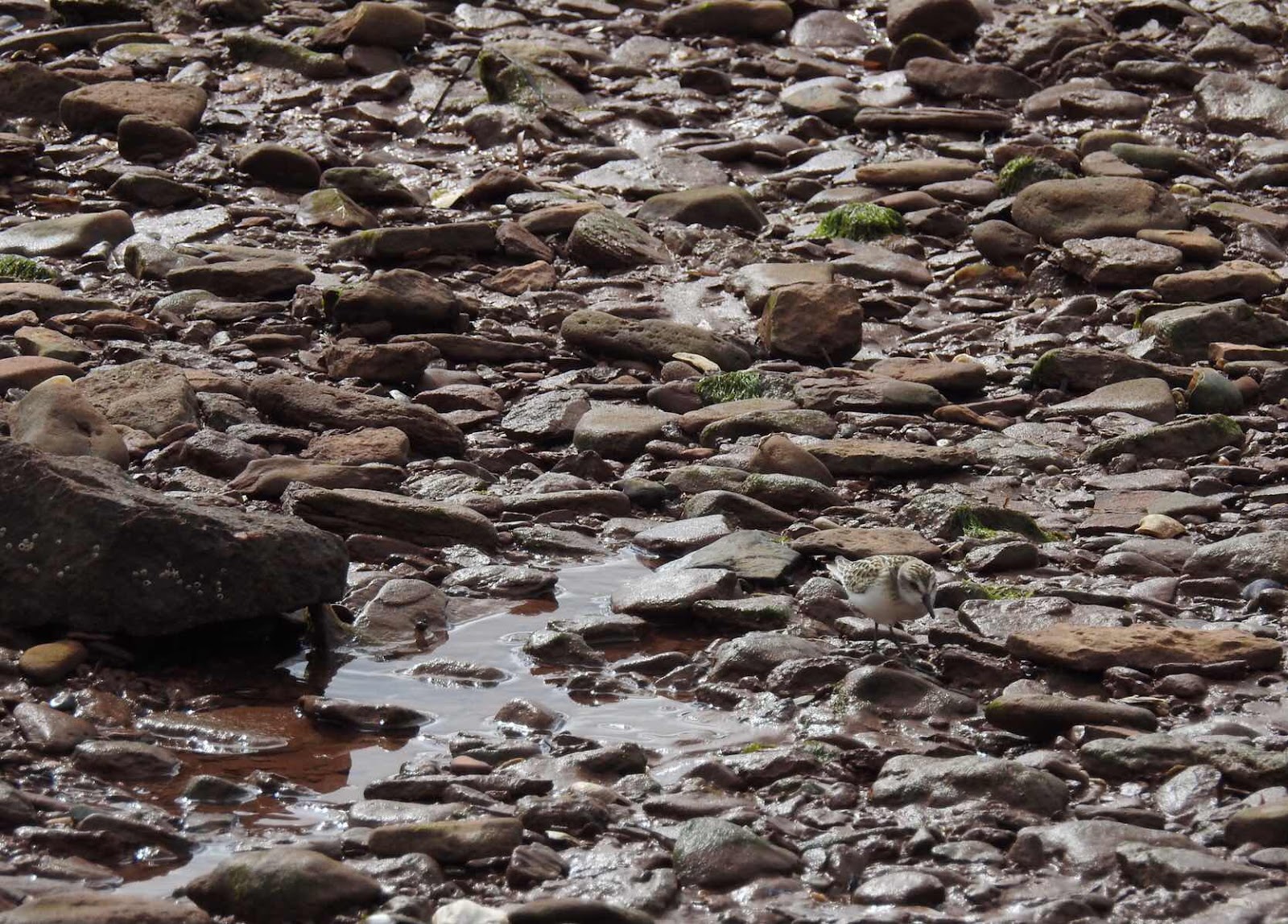 Semipalmated Plovers were around longer than their Sandpiper friends. They are hard to spot among the rocks along the shoreline. 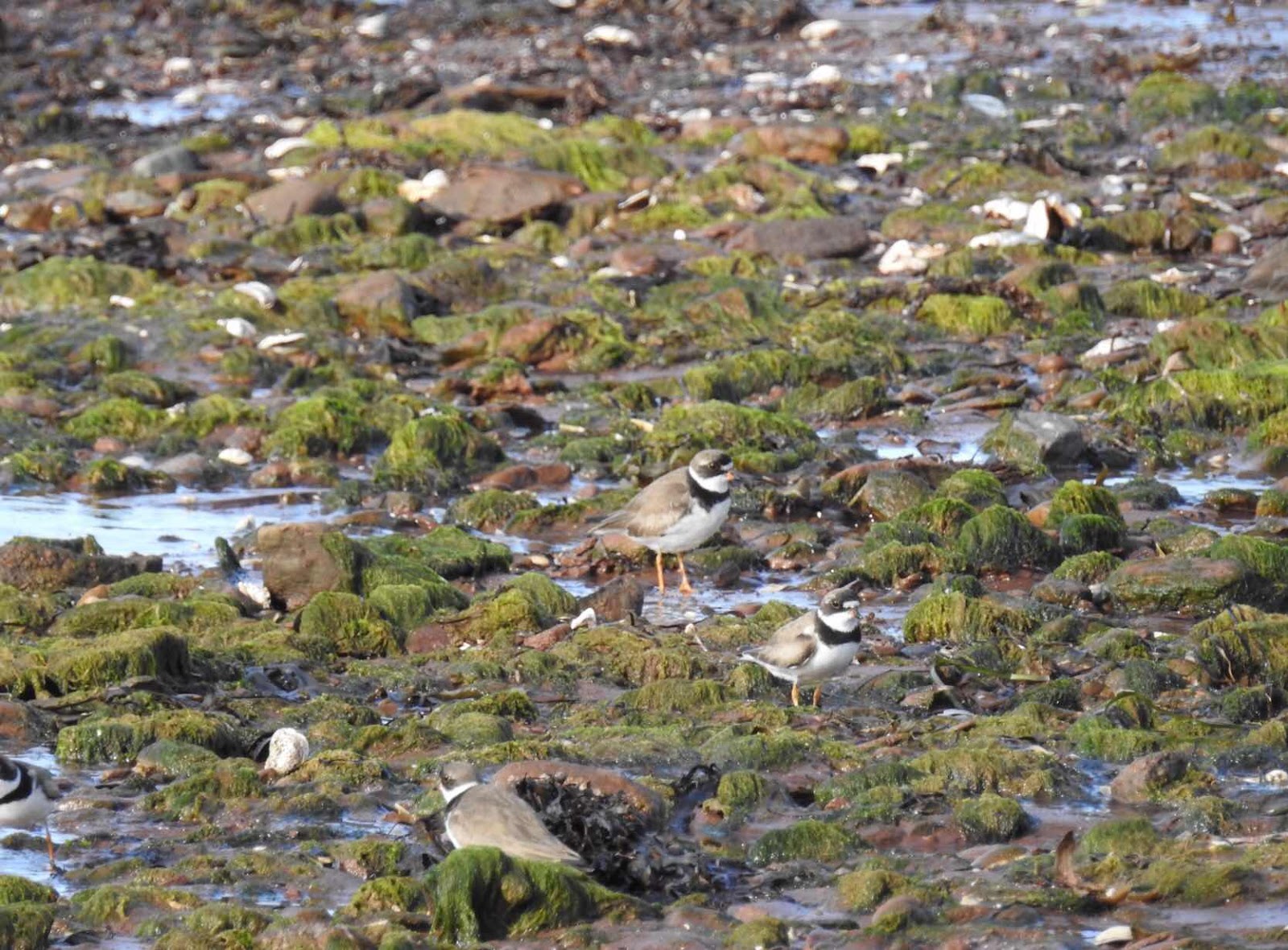 For several days, Black-bellied Plovers were among the birds along the shoreline in the harbour. They are unusual visitors to this location but we were happy to see them. Their markings are unique and quite attractive. 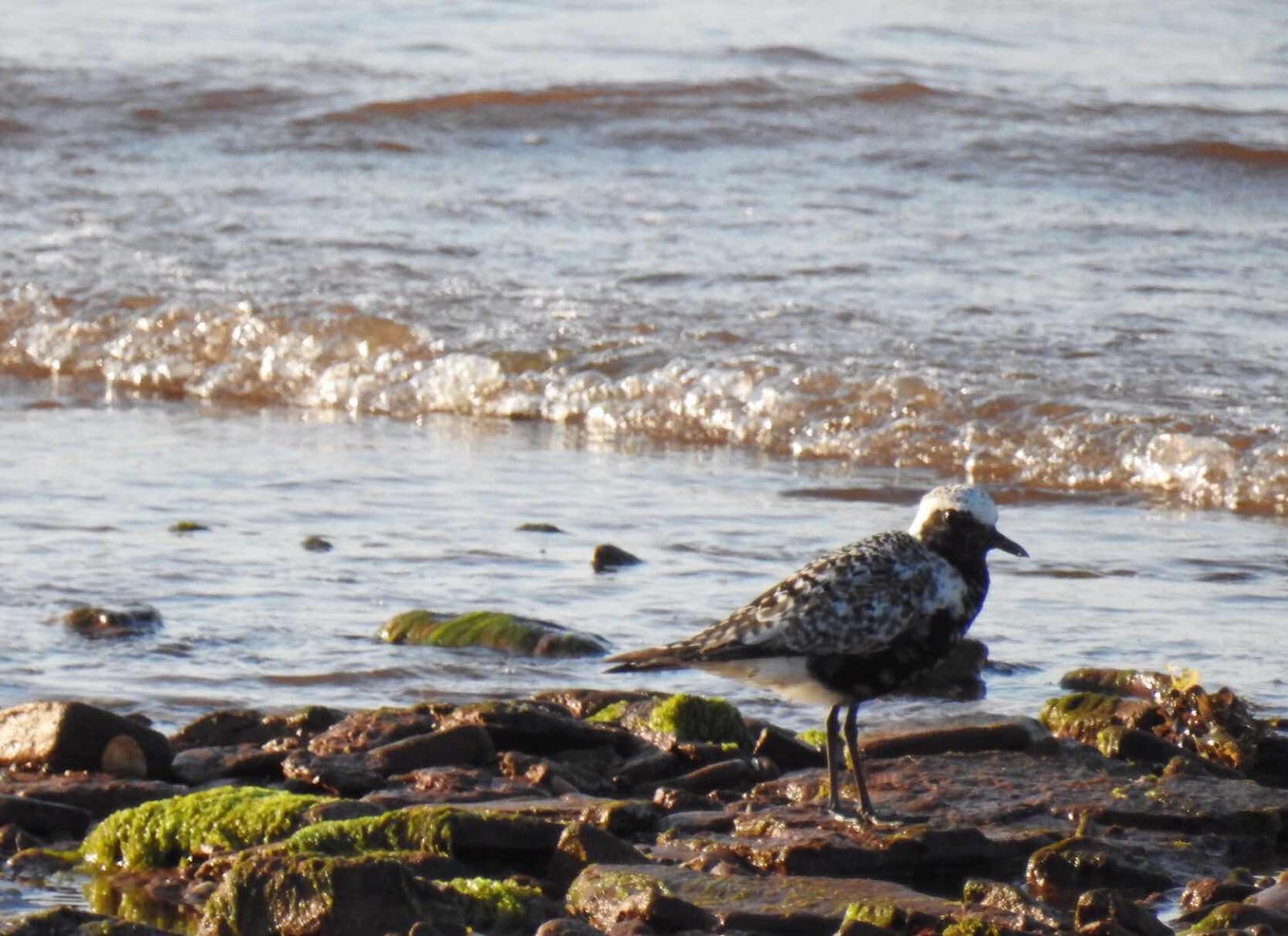 Another larger bird is the Ruddy Turnstone. A few were present on the beach at low tide when the Black-bellied Plovers were around. The Turnstone’s markings are unmistakable as well. 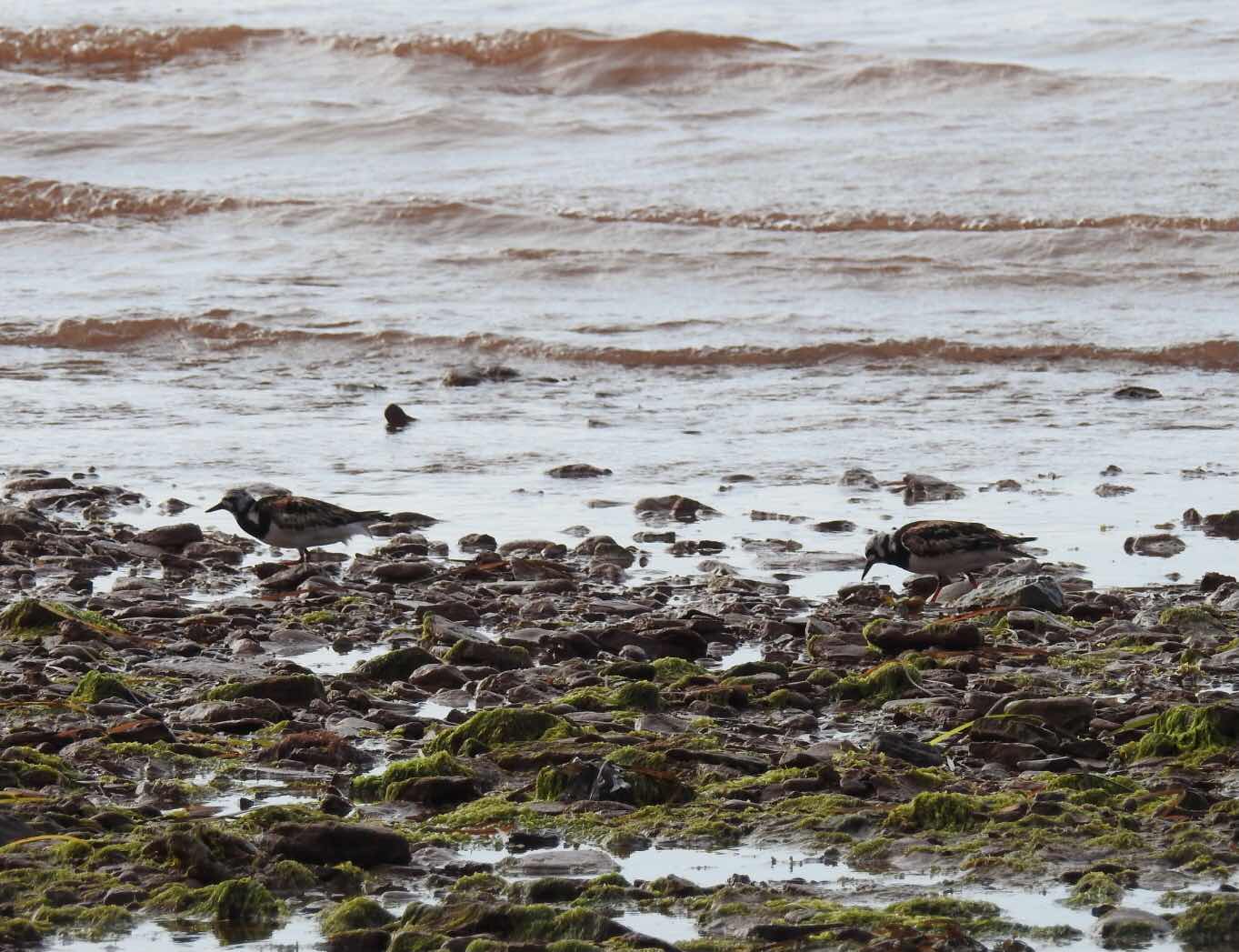 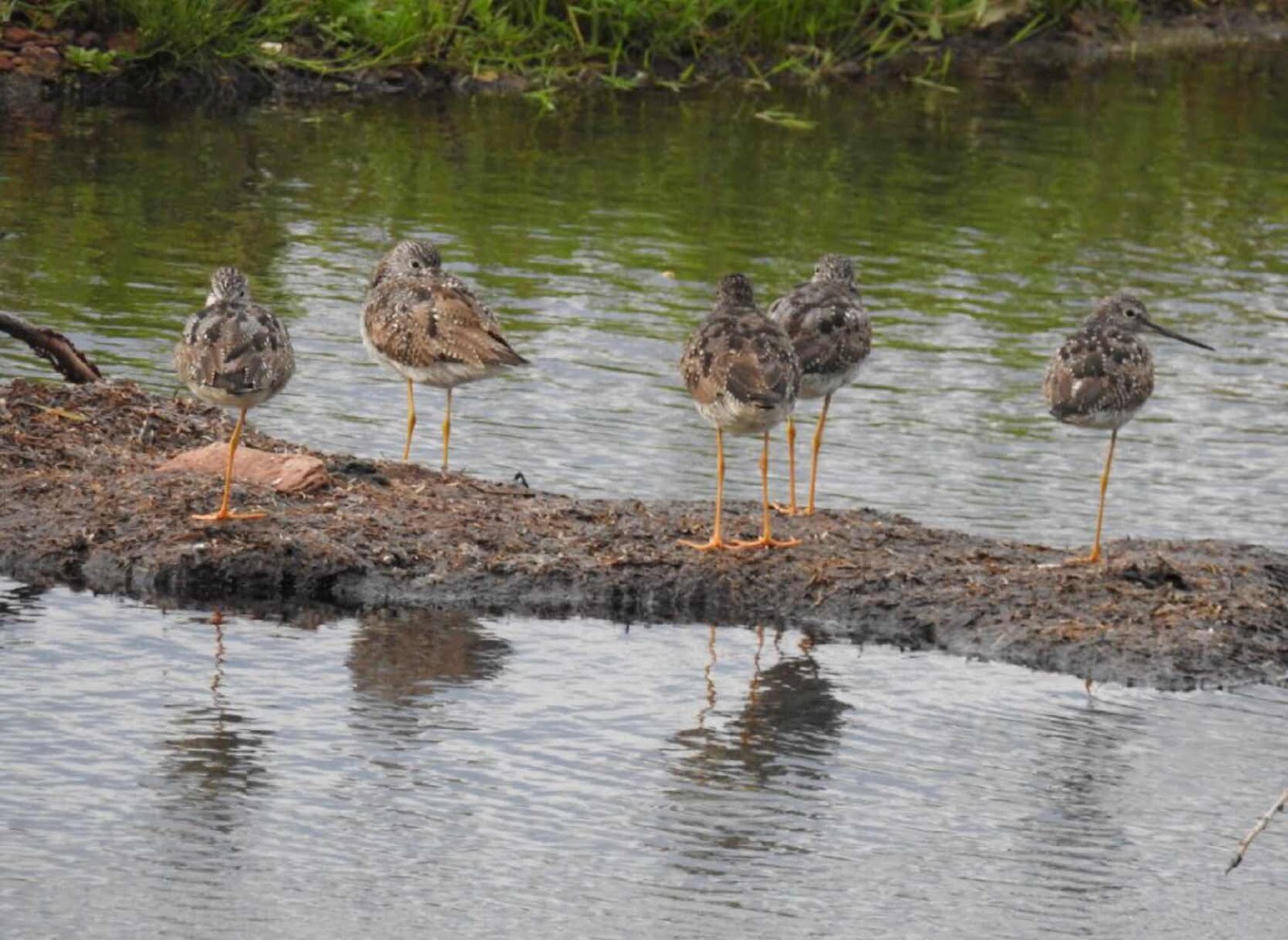 Lesser Yellowlegs were alone as they fed along the shoreline. 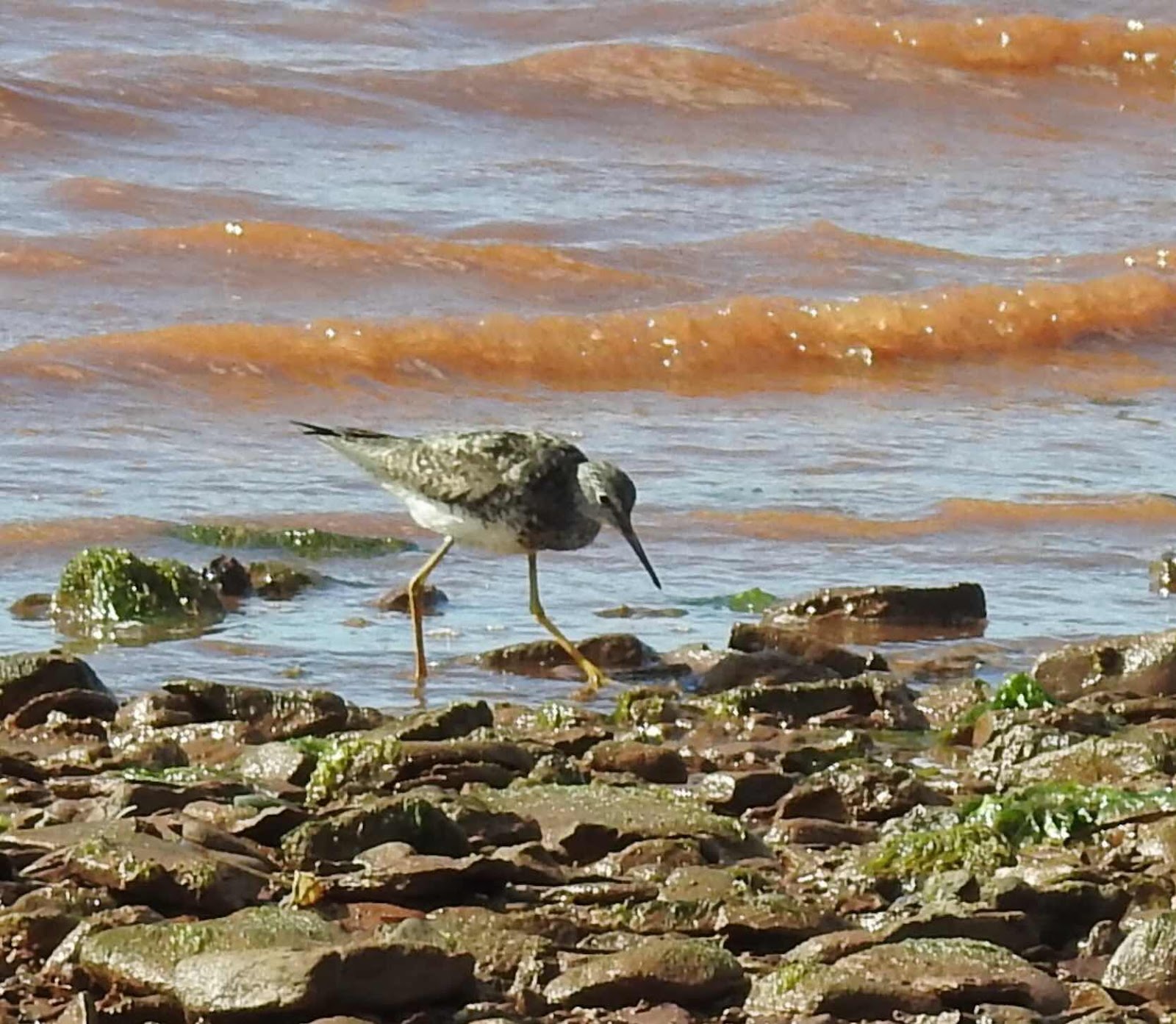 My favourite photos of the birds are those with two species together. This photo has a Yellowlegs and a Killdeer. 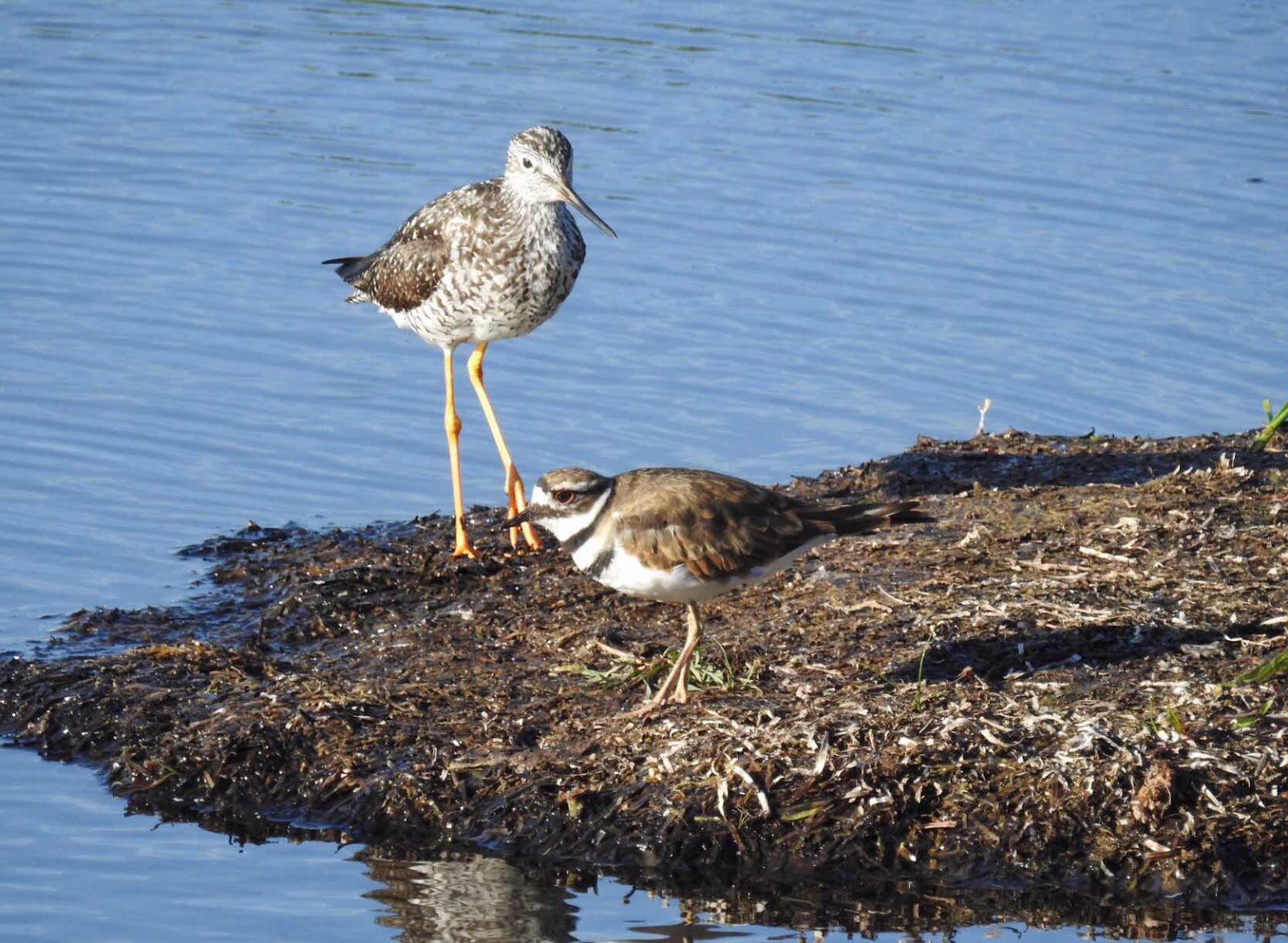 Some birds are not as easy for me to identify, such as this one. 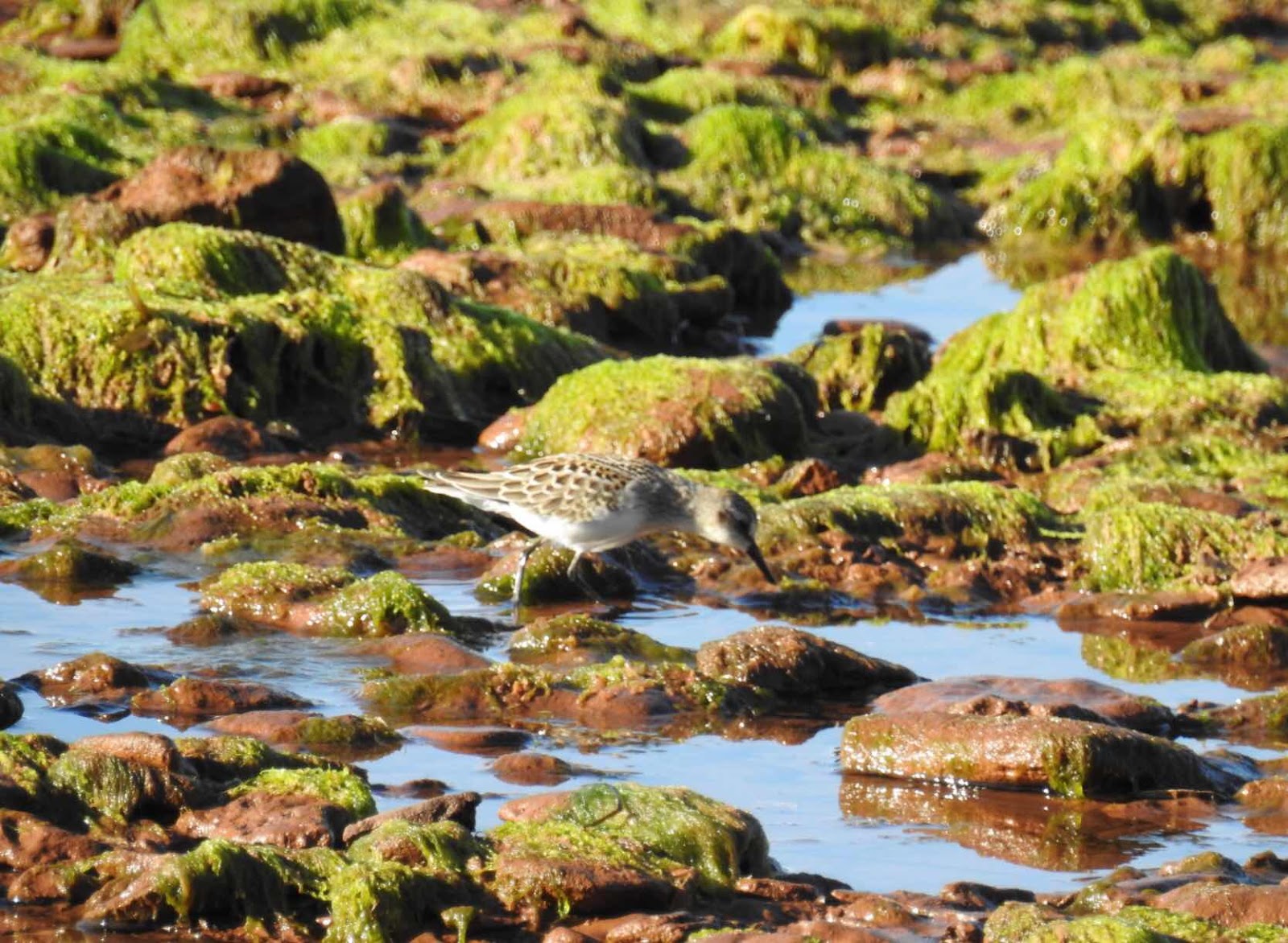 Most of the birds have flown south now but occasionally we are surprised to see some migratory birds along the shoreline. One day recently, twelve Great Blue Herons fed along the shoreline of the Summerside Harbour at low tide. The birds don’t mind the busy street nearby or the occasional senior stopped to photograph them. 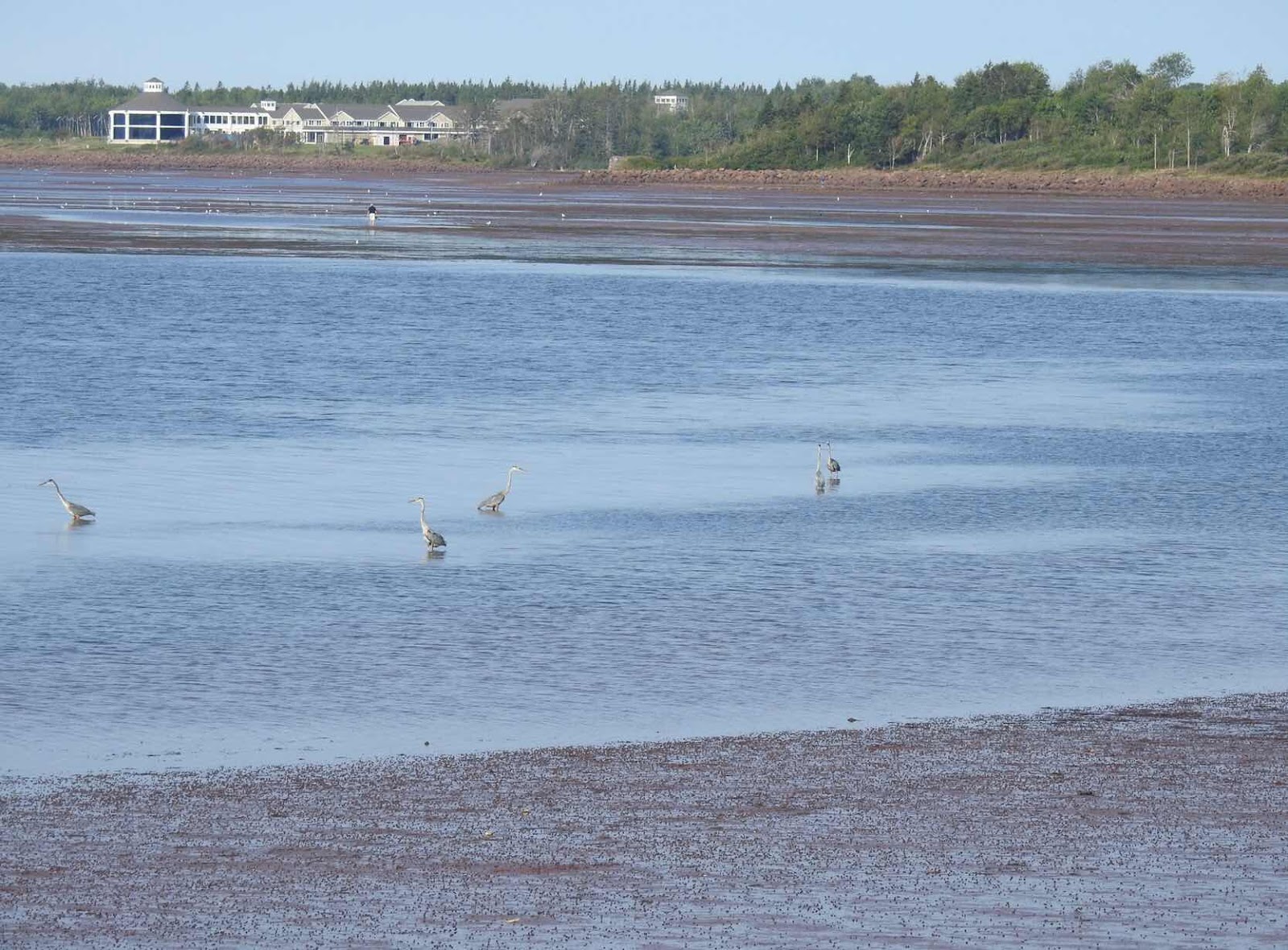 Wonderful bird pictures, I enjoyed them all. I could not have identified any of them without your help. Thanks for sharing these. :-)

Beautiful series of images here Marie, I love how birds, the yellow legs here, stand with one leg tucked up to keep warm.. I used to get upset that there were so many one legged birds, until someone pointed that out 😁

I wish I could photograph those birds! I don't see those here. I believe I don't go to the right places to see them.

Those Yellowlegs have such long legs! True shore birds, I guess.

Years ago, my husband and I used to go over to Cape Cod, every Autumn. And he would carve long-legged birds, on the beach. ~smile~

Nice look at your shoreline birds. Those Yellow Legs have long legs! I've never seen 12 herons outside of a heronry.

Thank you for this post. I delighted in each and every one of the featured birds. Of course.

They are all beautiful, thank you for sharing them with us! Have a great weekend :)

Beautiful birds!It is so nice walking along the shoreline breath in the sea air and looking at all those lovely birds

Thank you for sharing!

Wonderful bird photos, It took me a few minutes before I finally saw the Semipalmated Sandpiper among the rocks. It blended in pretty good.
Happy weekend to you!

I very much enjoyed this post. All the birds, except for the unnamed one, are familiar to me. Great work of getting those photos.

I hadn't realised that there is more than one family of plovers. We just have the masked lapwing.
What amazing journey's they all take.

You certainly saw lots of shore birds. You're right that they are wall camouflaged.

I wish your heron would send word to my heron, there is a senior who would love to take another picture of him.

what an exquisite collection from your beautiful walk dear Marie :)

i enjoyed thoroughly all the feathery beauties that are still in your area :) MAGNIFICENTLY captured each one indeed !

specially first image is taken artistically and i loved unidentified within green :) Sublime

wishing you all the happiness and peace in days ahead my friend!

I loved this post, I am missing the shorebirds sightings. The Plovers are so darn cute. I love the Yellowlegs too, neat capture of the GB Herons. I assume they are gathering for their trip south. Great series of photos. Have a happy day and a great weekend!

The shoreline was very productive. You must have enjoyed seeing all those shorebirds.

aww... a lot of birds along the shoreline....wonderful.
look like icy on some part of the beaches...cold.

Have a great day

Lots of wonderful shore birds in this post. I suppose some of them will be heading south soon. At least they don't have any travel or quarantine restrictions at the border!

I would be in heaven to see birds like that on an outing, Marie. I'm especially fond of the sandpipers but don't see them here in the Netherlands. Actually, seeing this post makes me think I could really get into bird-watching, if I were in an area where many species abounded.

I would have been as happy as a kid in a candy shop if I had got to see all of these...maybe even happier! I am not at all good with identifying shore birds. I don't see them that often.

Thanks for pointing out the Plovers among the rocks ... I would have missed them completely !

What a wonderfully rich environment to go birding in, even if they are mostly migratory. You take lovely photos :)

I always enjoy posts about birds and their photos! Most of the birds that you encountered are birds that I have never seen. I've been to Cape Cod once in the middle of the summer. It's beautiful

Lovely set of bird photos, I do miss not ever seeing water birds. I guess even a Solitary bird needs to have a mate for them to exist😉 Take care and stay safe, Diane

You captured some terrific snaps. Hope you enjoyed your birding adventure. Have a wonderful week.

Loved these bird pics, Marie. You are so lucky to live n such a thriving and beautiful place in this world.

you hit the "bird" jackpot didn't you?!?! you captured some really great images. your rocks are beautiful, i would have never seen that sandpiper had i not known it was there!!! i saw so many egrets the other day, more that i have ever seen in one day!!