For one of our recent cycling experiences, my husband and I went to the Confederation Trail in the central part of the island, a bit further from home. The trail is on the old rail bed which was left after the track was removed when the trains stopped running in 1989. 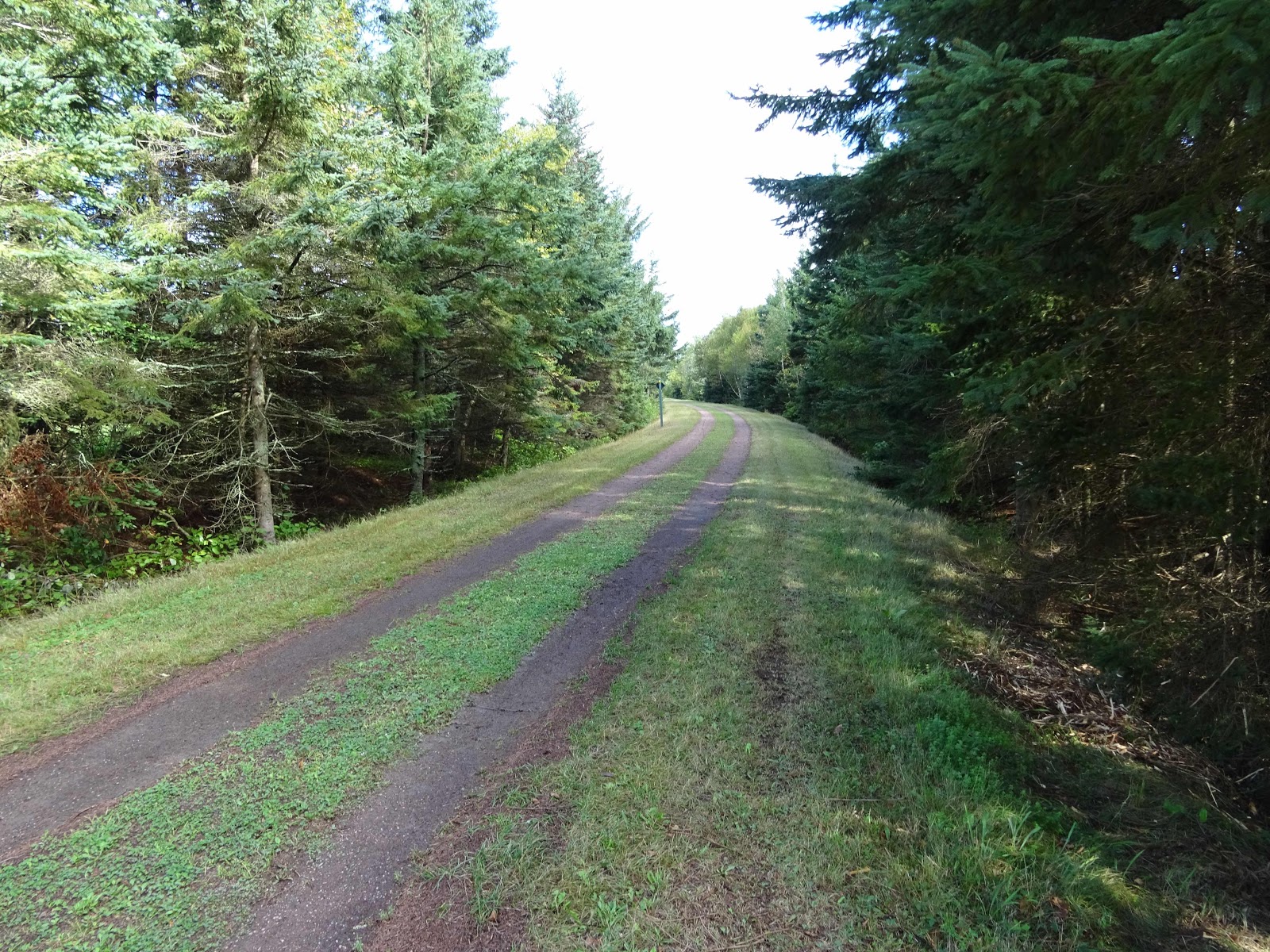 The track ran through the center of the island rather than along the coast. At the various stops along the way potatoes from the farms were loaded into boxcars to be shipped to markets through Borden along the South coast of the island.

Though the island is relatively flat, it doesn’t feel like it when you’re cycling. There are long grades with a gentle climb which don’t feel particularly downhill on the way back when you are tired. To this person new to cycling, the trail feels uphill both ways. But fun!

We went further again this time which is our goal with each outing. We passed fields of wheat 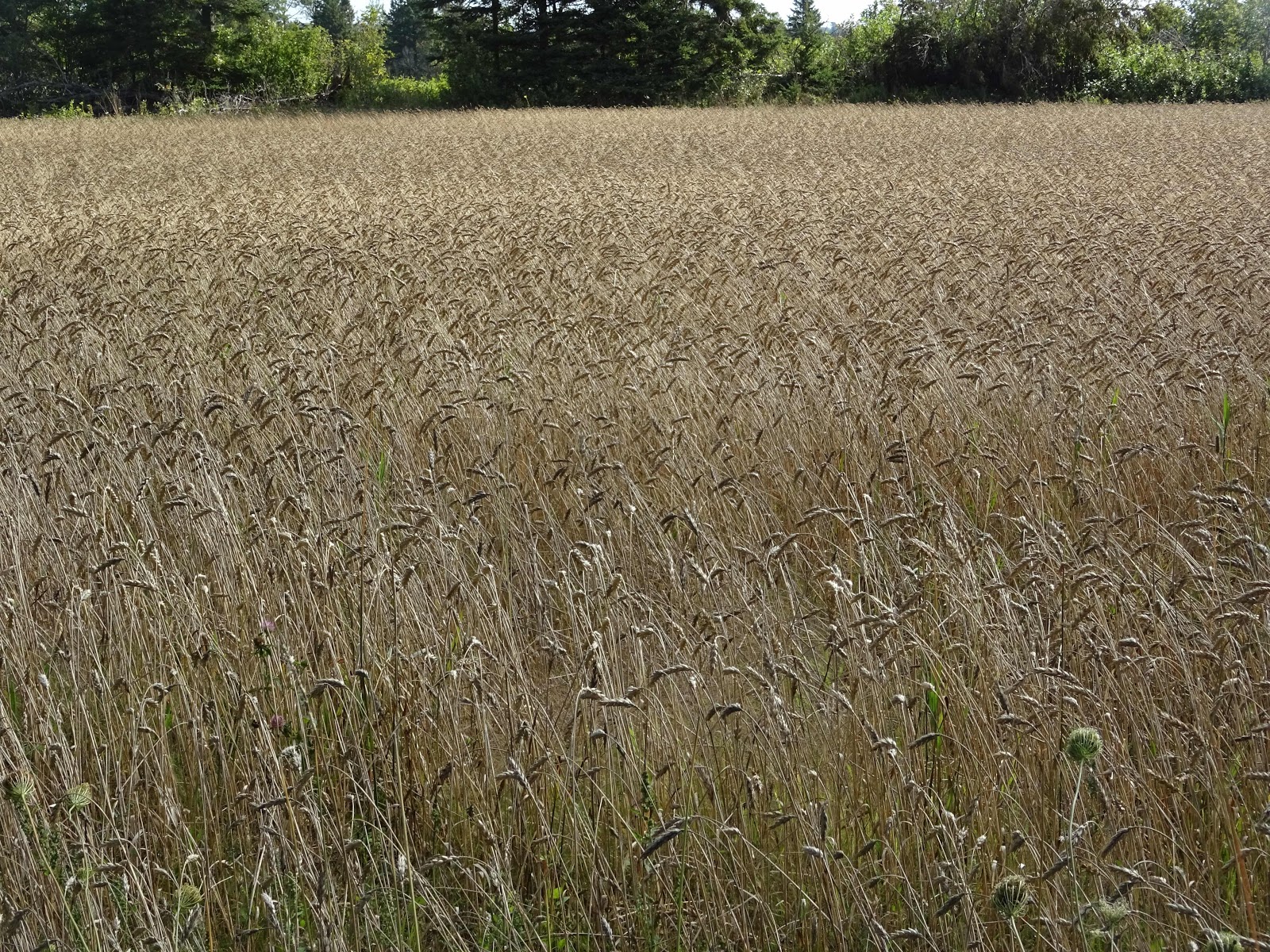 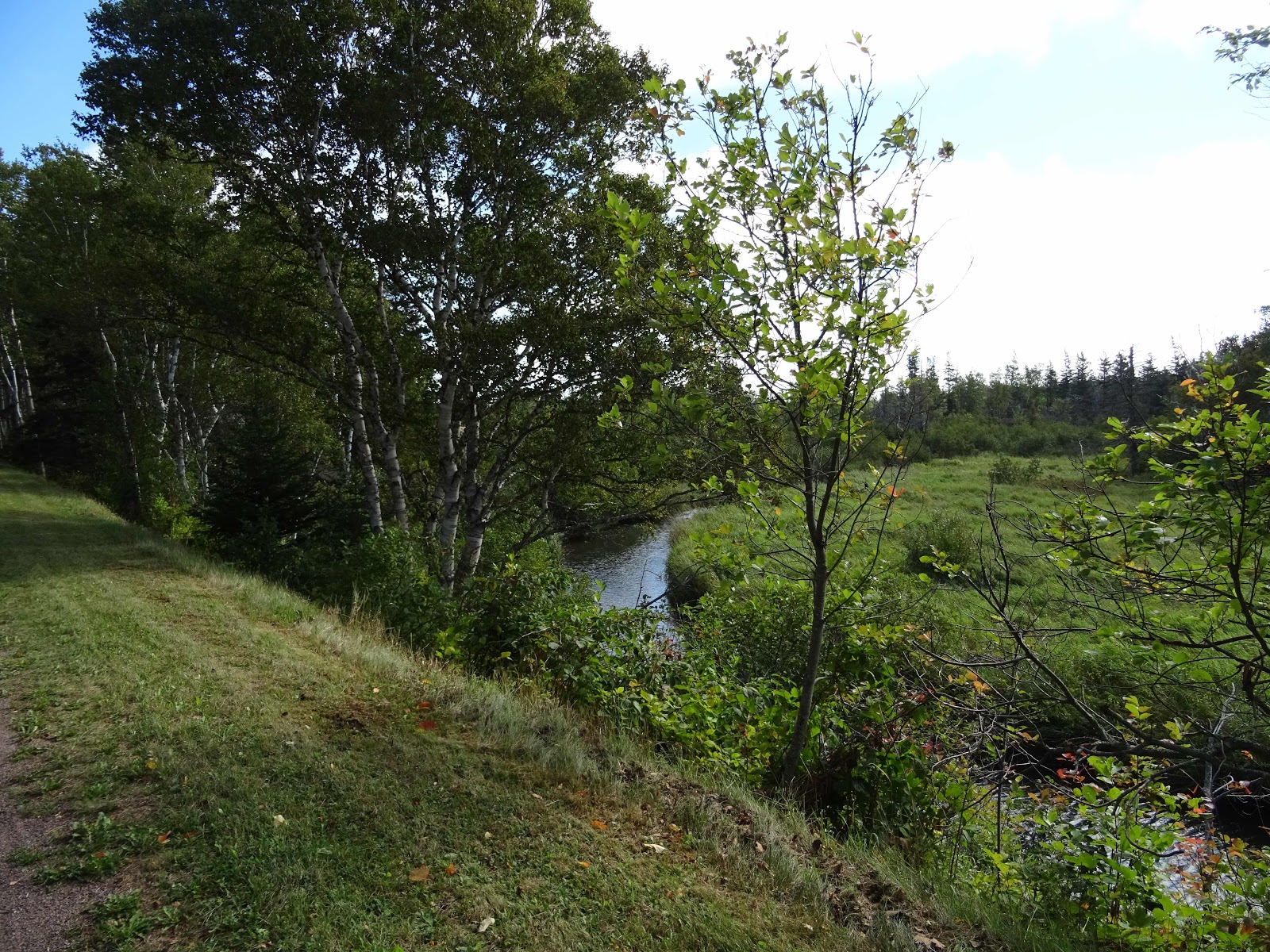 we had never seen before and fields with irrigation equipment. 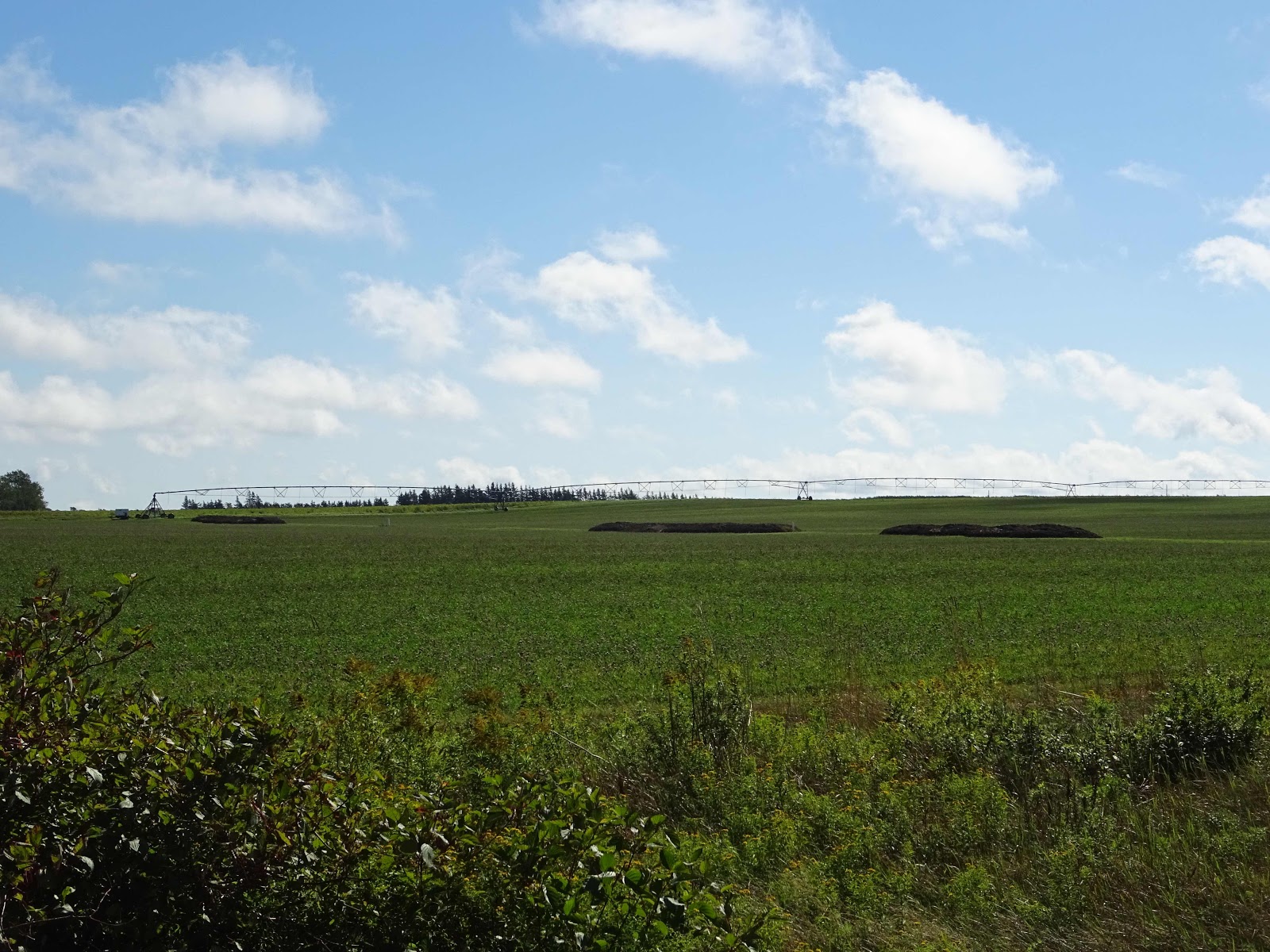 Around one bend the light through the trees shining on the birch trunks caught us by surprise. We stopped for photos. The green on the path with the strips of red earth, shadows dancing over them and the stately highlighted birches, made us want to stay and watch. However the trail urged us on to see more of its beauty. 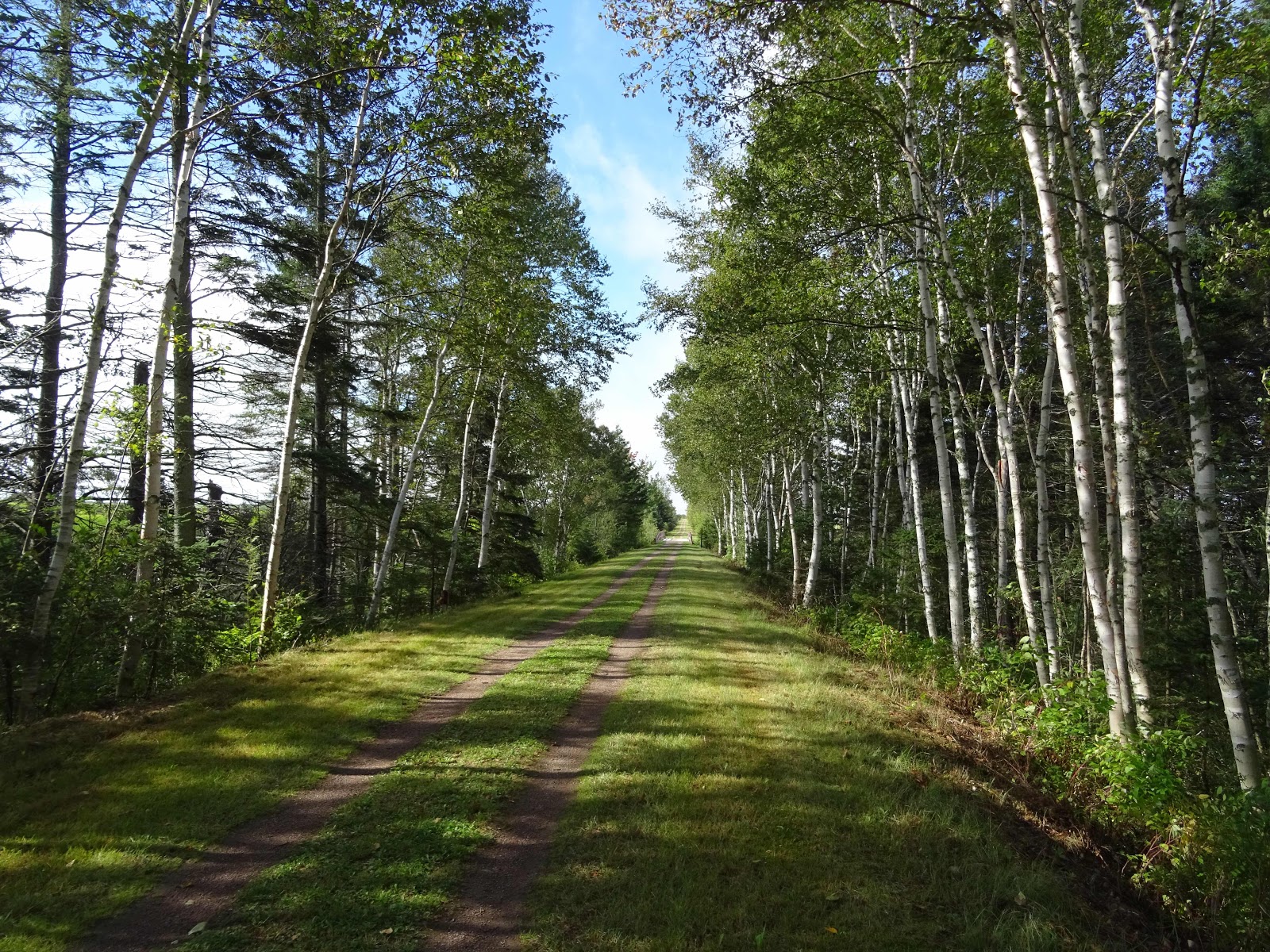 Along the way, lots of pale green butterflies lifted into the air as we rode by and in several areas small brown grasshoppers hopped around us as we passed. Even though you ride by quickly, you can notice the little things when there’s just you and the bike in nature.

Every now and then we see birds, such as robins, among the trees or on the trail. By the time you stop, they are gone of course. You can hear them among the trees sometimes and familiar ones like blue jays or chickadees are easily recognizable. I like the idea of the countryside around us filled with the unseen avians though I would like to photograph them. However, the beauty of the trail and the countryside suffice.

On another outing closer to home, we watched as a crew harvested a potato field. Never ones to miss a scavenging opportunity, dozens of gulls staked out places in the newly ploughed earth. They don’t miss much going on in the area. 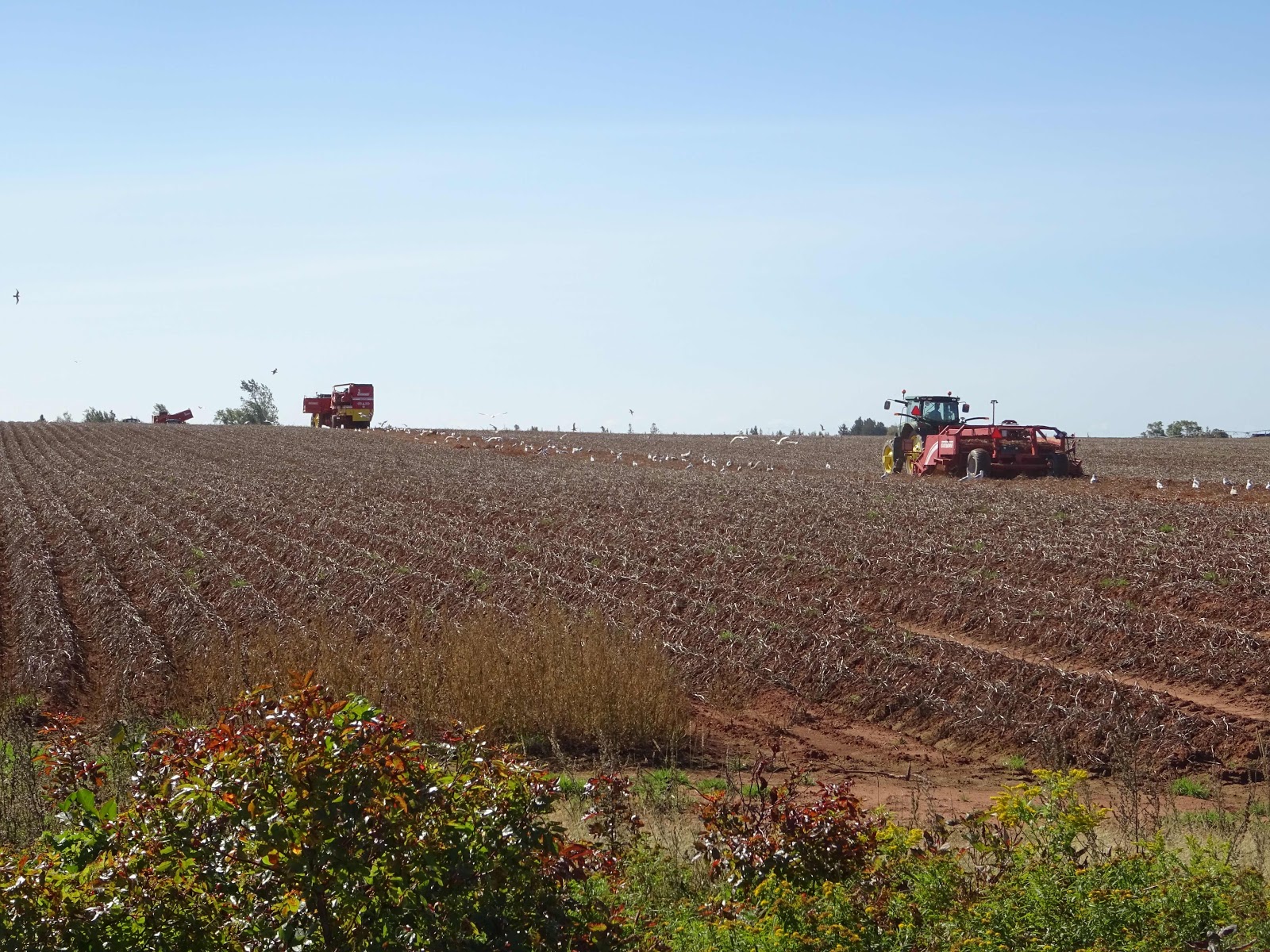 Red at http://hiawathahouse.blogspot.com/  who cycled himself until he was eighty, asked if we wear helmets.

My husband and I both wear helmets. Neither of us would dream of cycling without them. We were like children at the store trying on helmets and selecting our favourite colours.

After harvesting my own first batch of potatoes out of our garden, I was really interested in learning how they do it with machines like those. They must lose a good number, making the gulls happy. I'd like bicycling on that lovely surface, too.

For some reason, this post reminded me that daughter and friends cycled your island, I think in 99. I believe they did much of perimeter and camped. Daughter was the one who got to pll the trailer. I am not sure that she really enjoyed the experience.

The extent of my potato growing nowadays is in a container. I empty out the container and never miss one of those precious spuds. When I had a garden I think I missed some when I dug them.

It's cool that your bikes are taking you to new places. You see a lot on a push bike, and hear a lot too. No engine noises to interfere.

The trail looks beautiful, what an awesome bike ride. I enjoyed the scenery all along the way. The birch trees are a favorite. I like the last shot of the harvesting with the gulls. Take care, enjoy your new week!

That trail sure does look inviting, and love the one shot with the birch trees. I would like just hearing the birds...

That looks a lovely cycle ride. Travelling by foot or in a car you never notice the gradient like you do on a bike!!! Stay well Diane

What a lovely bike ride Marie. Congrats to you both for working so hard to stay healthy and strong.

What beautiful scenery, such a gorgeous place to ride! I'm glad you are able to get out in nature and glad you are wearing your helmets too. Have a fantastic week :)

What a nice trail to take a bike ride on. Lovely photos especially all those birch trees. Have a great day and a wonderful new week.

So many rewards, of cycling....

You are wise to do it, for as long as your can.

An awesome bike ride! I love birch trees too.

That was quite a marathon. And you managed the "big hills"!!! Good job!!

Both of you are an inspiration to people like me who are afraid to cycle in the big city... That's my excuse... : )

Bravo to you. If I had good knees, I would join you.

What a wonderful world of adventures you are having.
I suspect the train tracks are just left here. Which is a shame.
And I remember those looooong gradients. They can be painful.
Well done you.

A nice, deep breath of fresh air! Thank you.

Oh what beautiful views along your bike path.

I used to have a favorite oil painting that featured opposing tree shadows. I had to let it go, when I last downsized. I hope it has a new, happy home.

There were very wise people in PEI when they made the railbeds into trails.

Such an incredible experience being able to be out in nature like you are!Interesting how the grasshoppers jump on you even when you are moving!

I only learnt how to ride a bike a few years ago - I know what you mean by the 'up hill both ways' idea - it seems a rather common design feature if you ask me!!

My wife is quite convinced that "uphill both ways" becomes the normal state of affairs once you pass sixty!

Oh I don't relish the idea of riding up hills however gentle they are Marie, memories of riding to school many years ago come flooding in 😁 I love all the beautiful trees in this post💜

I really applaud you for riding the bikes ... and especially making it a little longer or more difficult each time. That beats so many other ways of exercising ... fun as well as benefiting health,

i am so happy for you, riding and having so much fun!! and feeling that i was, in a small way, part of getting you started!!

this is a great trail with lots to see!!!

How thrilling to be able to explore new places now you can travel further. I had to chuckle at your uphill, I think a lot of us can relate to that!

What gorgeous photos! You live in a beautiful place. I too have recently taken up cycling, but use an e-bike. (although I try to avoid using the power assist) I always wear a helmet, although I should probably wear full body armor the way I turn sometimes.

I love the Confederation Trail. Perhaps on a bike, I would take fewer photos! Wonderful to see your perspective of this time of year. I bet you can't wait for your electric bike to arrive!

Another wonderful tour of your neck of the woods. So many great areas around you!

Beautiful landscapes. Must have been a great, but tiring, ride.