Lighthouses figured prominently in our summer of the pandemic. We visited a number of them in different parts of Prince Edward Island. While we don’t often visit eastern PEI, lighthouse visits were worth the drive a few hours away to see the shining sentinels.

We visited Cape Bear, on the southeast corner of the island. Built in 1881, the tapered square stands above the cliffs casting its light over the Northumberland Strait. 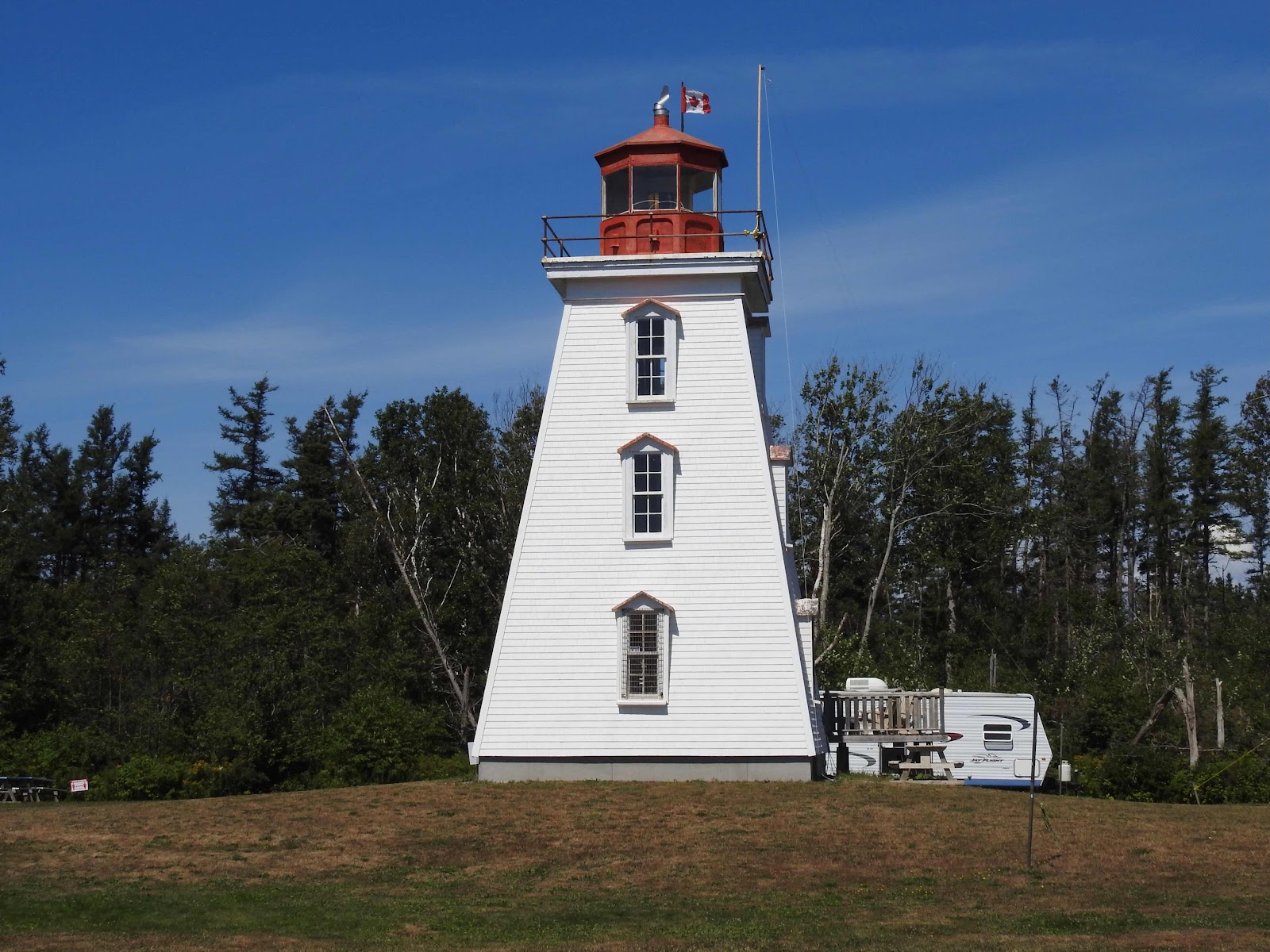 While we were there, a fishing boat passed nearby, illustrating the need for the light along the coastline in the days when it was established there. 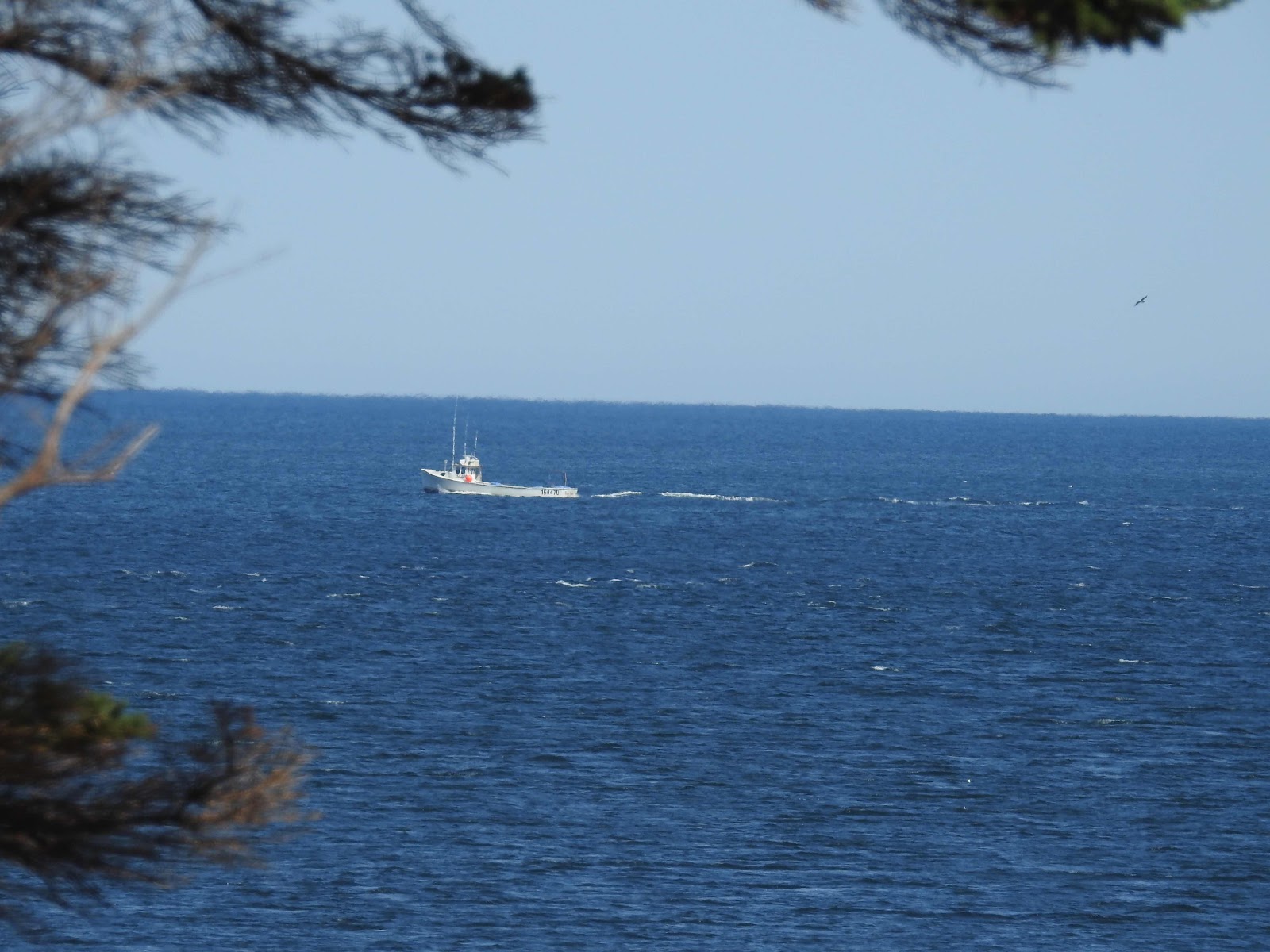 What is unique about this place however is by 1905, another building at this location housed a Marconi wireless telegraph station. This was the first Canadian station to receive a distress signal from the Titanic in April of 1912 after the vessel hit an iceberg on the Grand Banks, off the south coast of Newfoundland. Cape Race in Newfoundland received the first signal but Newfoundland was not part of Canada at that time.

Today the Marconi building is gone but the lighthouse has a museum where one can see the links to this past. 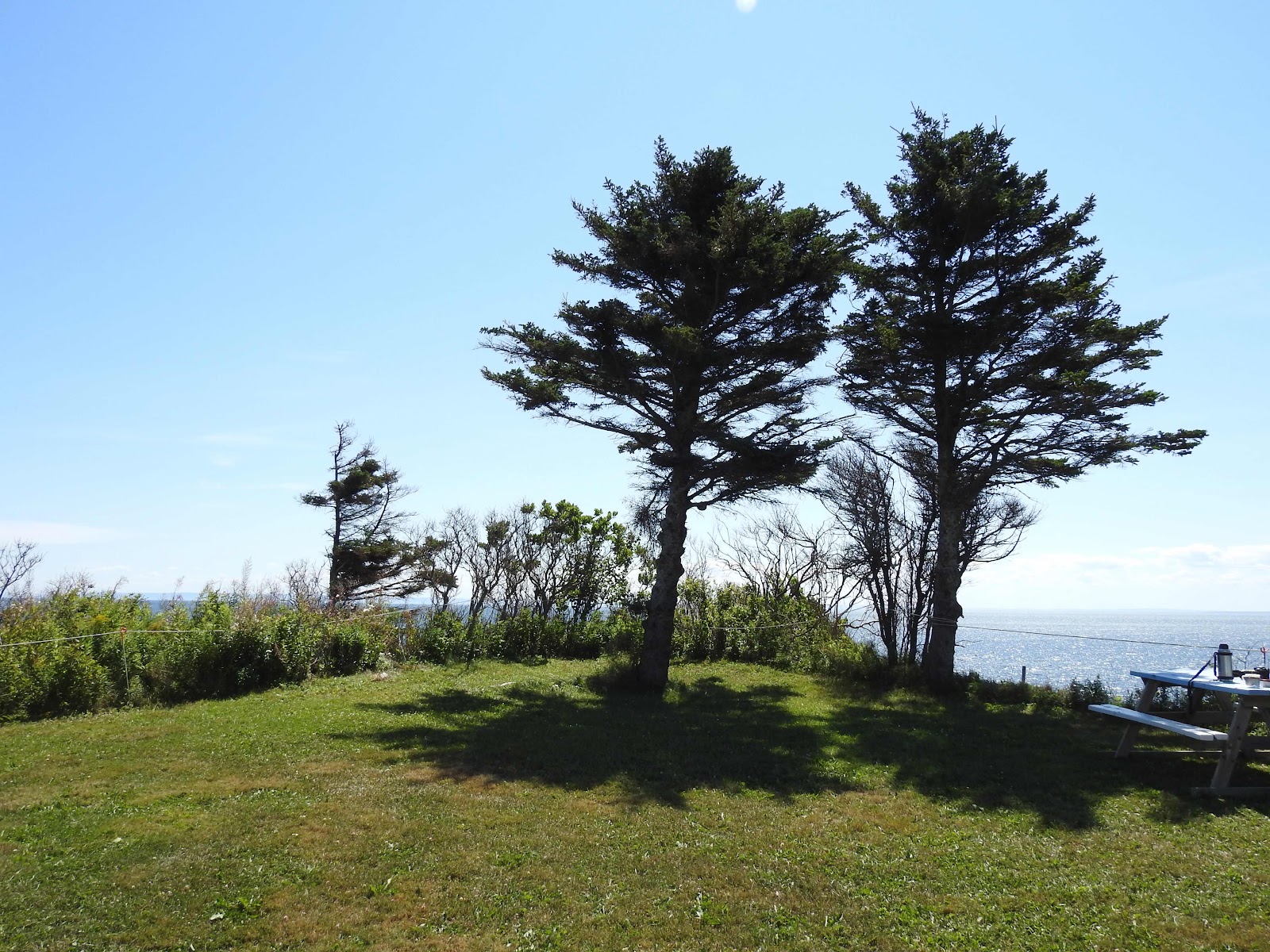 We had a picnic lunch under trees within sight of the cliffs. 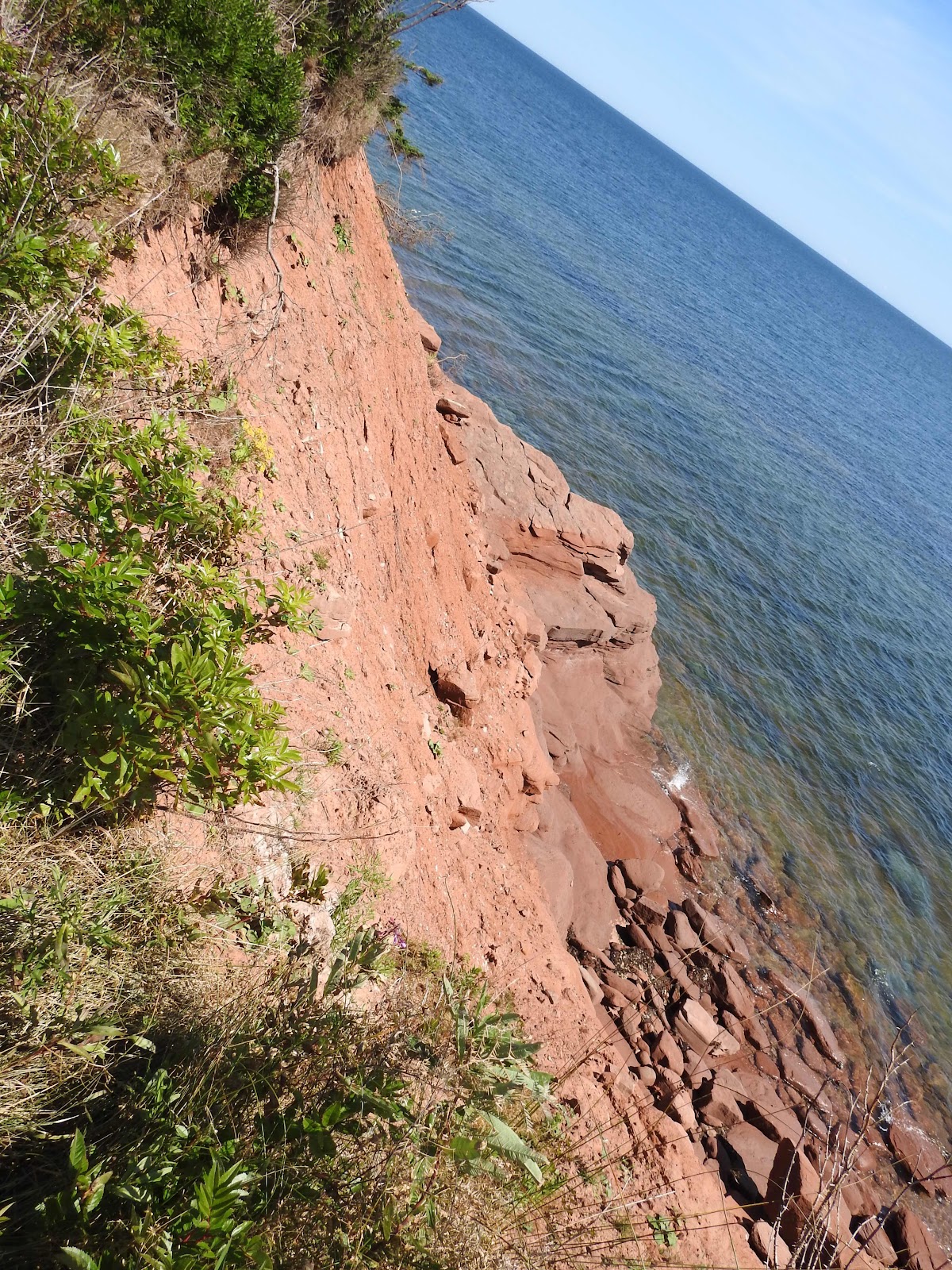 Then we drove north along the coast to see the Panmure Head lighthouse.

It was built in 1853, the second built on PEI, a wooden, octagonal structure with a keeper’s house nearby. The light was automated in 1985. The four story structure is now maintained by a local group, as are many of the lighthouses on the island. 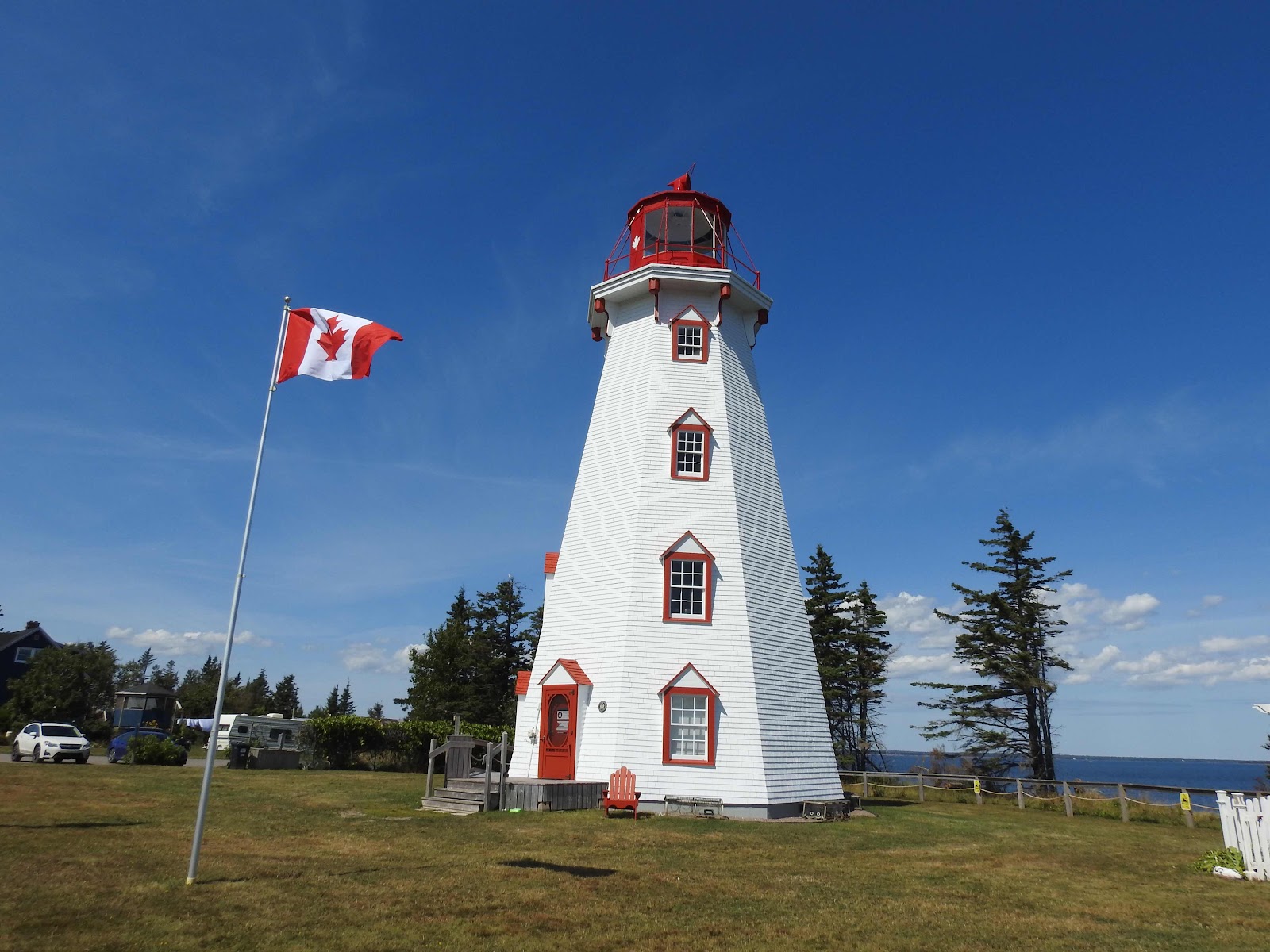 In an adjacent field, two horses grazed, unconcerned about the steady stream of visitors nearby. 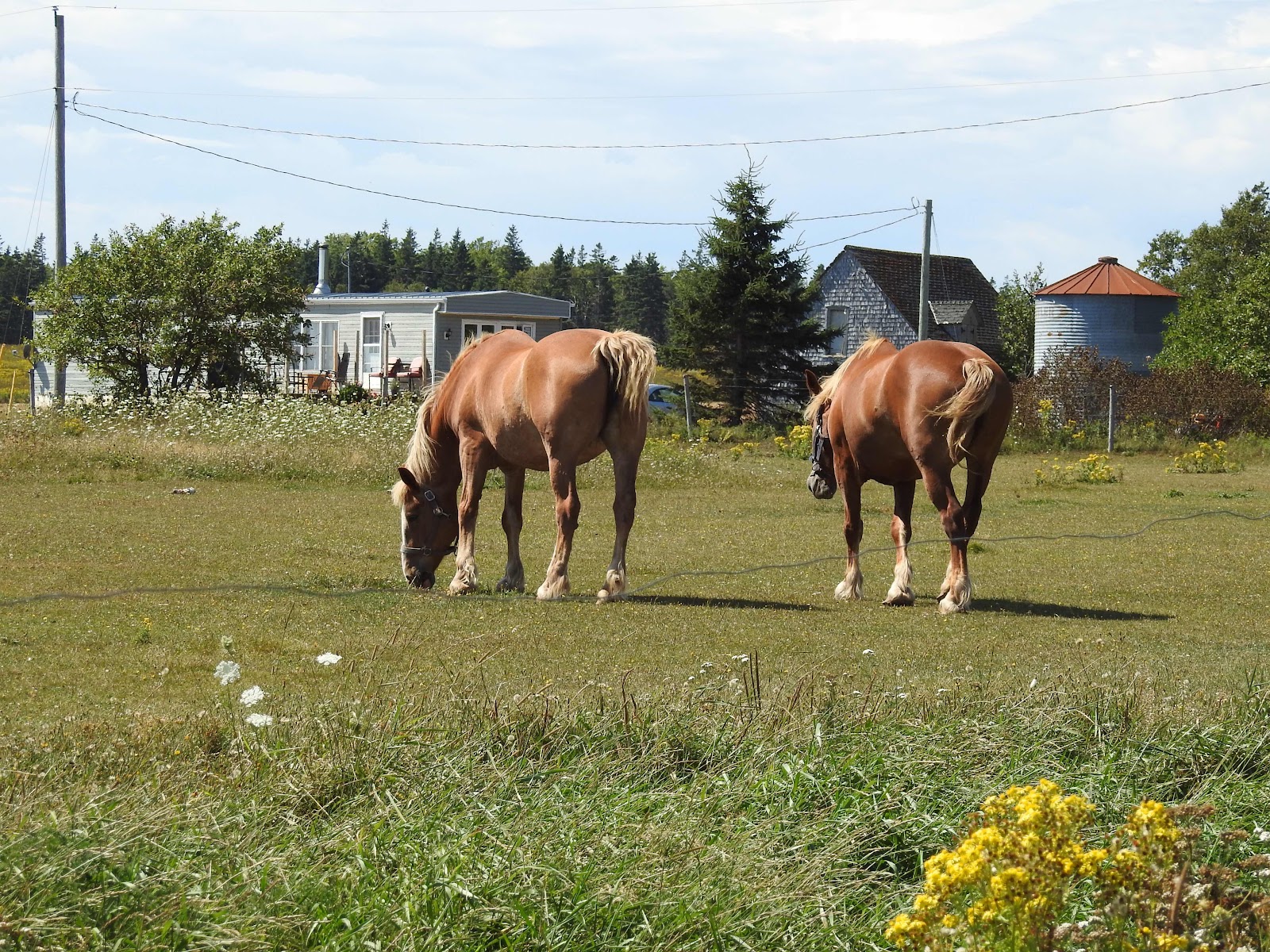 On the water, recreational craft speeded past or caught the breeze in their sails. 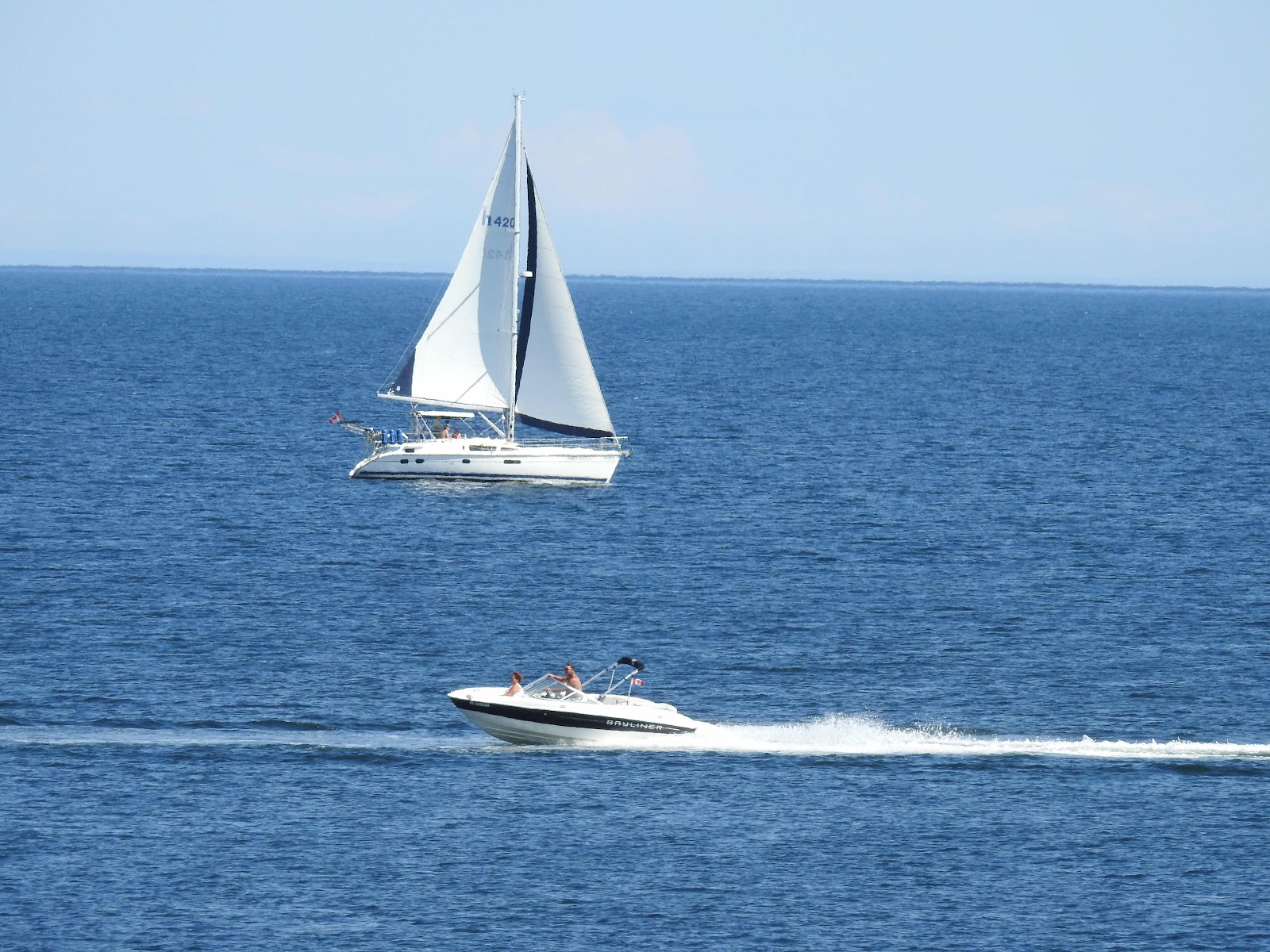 Below along the shoreline, people enjoyed the beach. 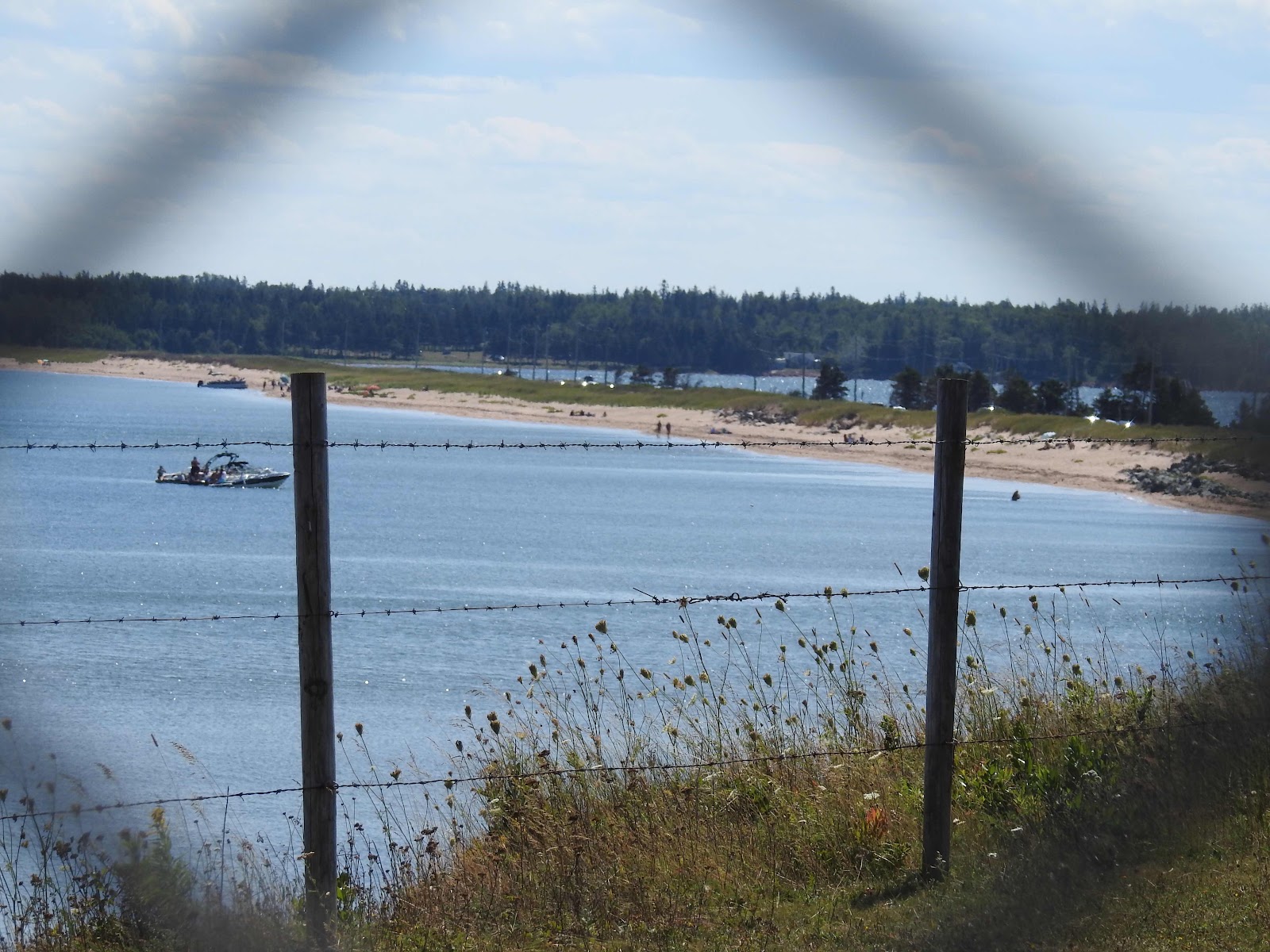 For this lighthouse lover, these two were well worth a visit.

Gorgeous photos! I'm glad you had a nice time. You made me nervous with the photo off the cliff, looks like you were way too close to the edge!

I love lighthouses, and these two are really exceptional. I wish I could visit them in person, but your pictures are a good way to visit them without having to fly! :-)

Oh absolutely and for this lighthouse lover I'm so happy to see them. These two are a really attractive shape. So interesting about the Titanic signal, such a tragedy on it's maiden voyage. Happy weekend Marie ✨

Two lovely old buildings. I think all our lighthouses in the UK are built of either stone or brick. I've never seen a wooden one here.

What great lighthouses with style all their own. Love them.

They are beautiful...and I agree, well worth the visit. If only I lived within driving distance.

I love where you had your picnic.

All photos are lovely...

I really love lighthouses.
There are so few along our West coast of California.
Maybe that's why I enjoy your photos so much.
Glad you took the time to go to the other side of the Island.
Sue

I love lighthouses, and those are beautiful ones! I envy the photos of blue sky and sun too since we're having torrential rains right now. At least that's good to put out the wildfires. If it's not one thing, it's another.

These lighthouses are beautiful.

What wonderful memories from the pandemic days.
And what beautiful lighthouses.

Having only seen lighthouses on pictures,visiting these would be a thrill. Thanks for sharing your visit.

What a beautiful lighthouse. Spectacular shot of the edge of the cliff, what a wonderful perspective. Have a great weekend.

What a fabulous day! Love the photos. Sunshine, water and lighthouses!

My father was also a radio operator on the great lakes shipping in the thirties. We had lovely stories of storms and water and light houses.

It has been awhile since we were in Nova Scotia and visited a few lighthouses, bu we didn't visit that famous one.

There's lots of history with these lighthouses.

LOL your cliff photo gave me vertigo!!
I'm currently planning a road trip with three others for the end of October and we have three different lighthouses that we want to visit. Am looking forward to that :)

lighthouse in your area sound to have historic importance and exquisite beauty:)

your shots are powerful and intriguing as always ,seems like i accompanied you there :)
thank you so much for sharing
blessings!

You live in a beautiful place. Beautiful and with an interesting history. Have a good weekend, Diane

Beautiful!
Have a wonderful weekend!

Trying to catch up on all the posts I've missed.

I love trees and forests but for me you can't beat the sea. You live in such a beautiful place.

I would love to join you on an expedition to see lighthouses! And it would be lovely to be by the sea, I miss the sea so much, but I think I have said that before!!!!

Your posts exude peacefulness and, for the most part, tranquillity.💖 I do so enjoy your Island through your words and photos. I, too, love lighthouses and their stories.

such interesting information about the titanic and the lighthouses. nice that you were able to have your picnic!!!

Oh these are both beautiful places! Gorgeous lighthouses with wonderful history. Thanks for sharing !

Fabulous photos. Of course I love the ocean and miss it!

I am a lighthouse lover too, these two are both beautiful. I love the views of the water and boats. The cliff looks a little frightening. I love the pretty horses too. Wonderful collection of photos. Enjoy your day, I wish you a great new week!

There is something magical about lighthouses ... similar in so many ways but always with their own special flair. Lovely.

What a perfect spot for a picnic! The lighthouses are nice. I wish I could see them.

A trip worth taking... absolutely!!

One of my brothers lives in the Puget Sound area of Washington, with a beautiful view of the sound. He likes lighthouses so much that one of his bathrooms is a lighthouse theme. Love the pics in this post!

That lighthouse is beautiful. We hope to visit there some day and see the museum.