We visit the Argyle Shore on the south central coast of Prince Edward Island several times a year. Canoe Cove, along that shore, is where we buy wildflower honey from our favourite vendor at his roadside stand. 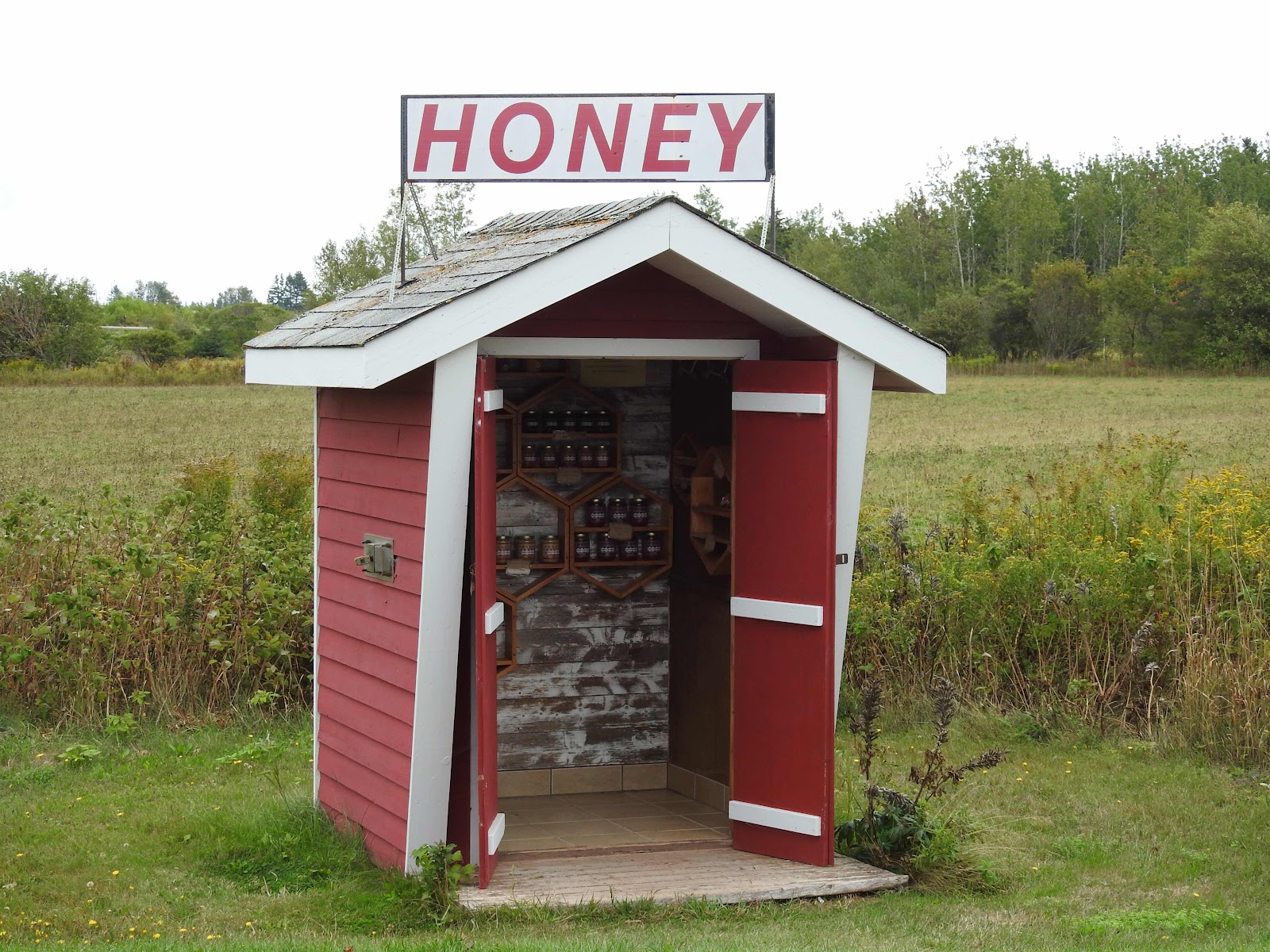 However, we’d never visited Rice Point until one day last week. We were hunting seals.

I recently posted a photo of a seal, the first I’d ever seen around the island though my husband and I always watch for them. Helen, a blogger from Brisbane, Australia, see below, told me where she saw seals with her family when she visited here. Sure enough, there were seals at Rice Point at low tide, just like Helen said. Thank you, Helen! Here.

The beach reminds me of Canoe Cove just up the road where the tidal pools at low tide are of great interest to our grandchildren. 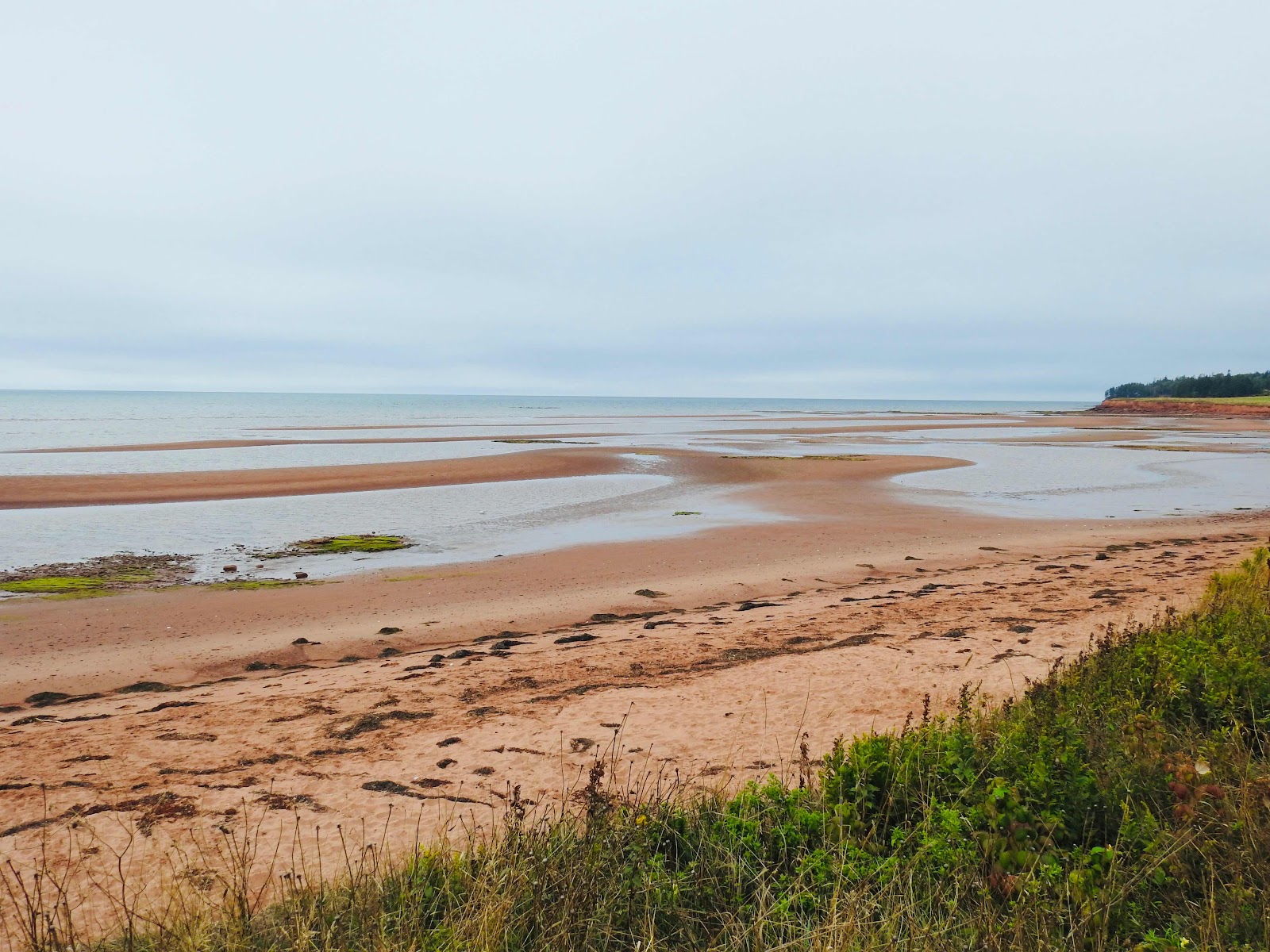 Here, at Rice Point, offshore on a small, barely exposed sand bar, I saw shapes which could have been rocks. 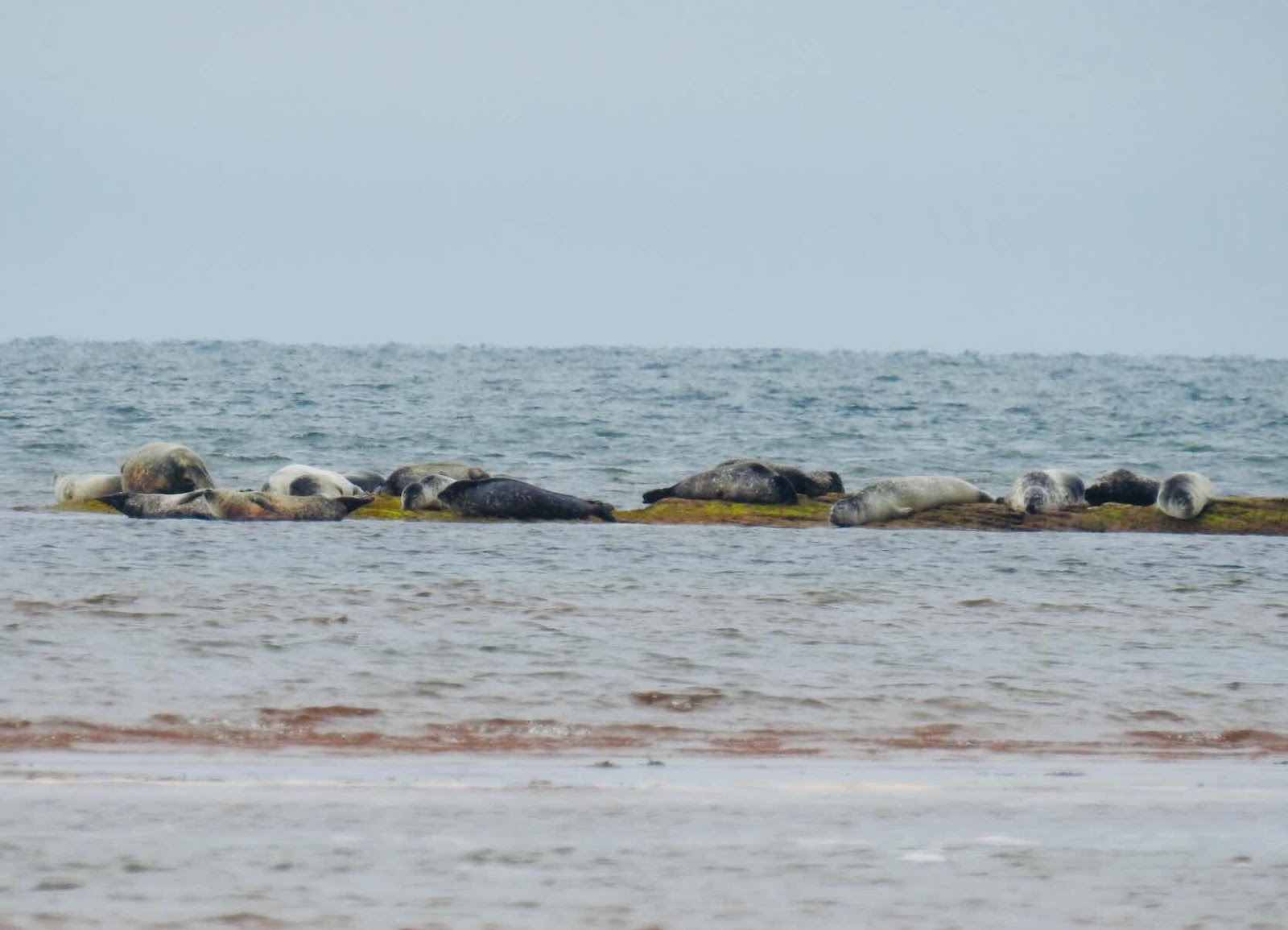 I recognized the familiar shape of cormorants along one part of the sand bar too.

I walked as far as I could and sure enough, the shapes were seals of various shades of grey and black and various sizes though all were big. Had I been prepared to wade in the water, I could have taken closer and had better photos. Another time. 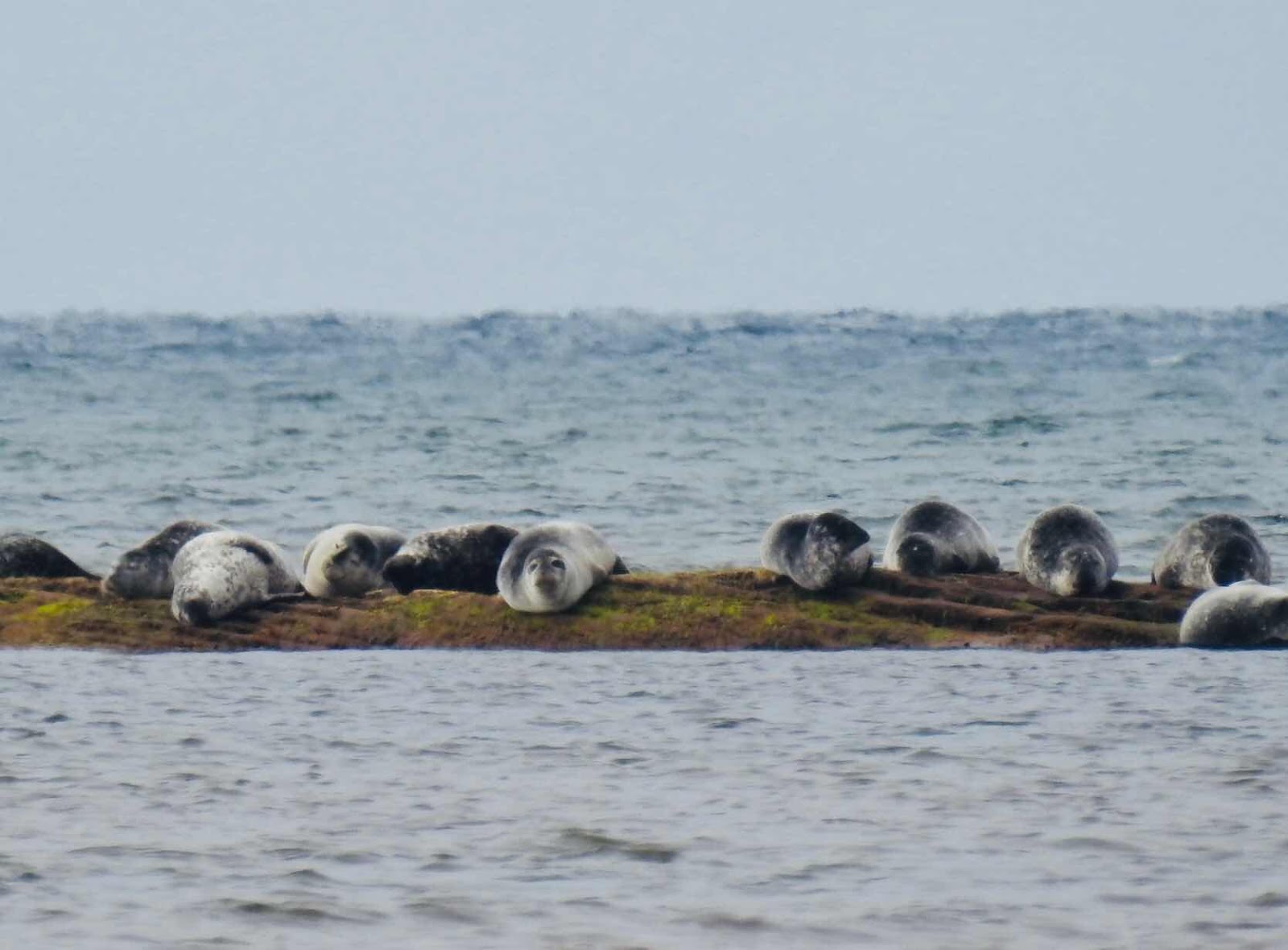 The sand itself has wave induced shapes which I find intriguing too. How does ebb and flow create these? 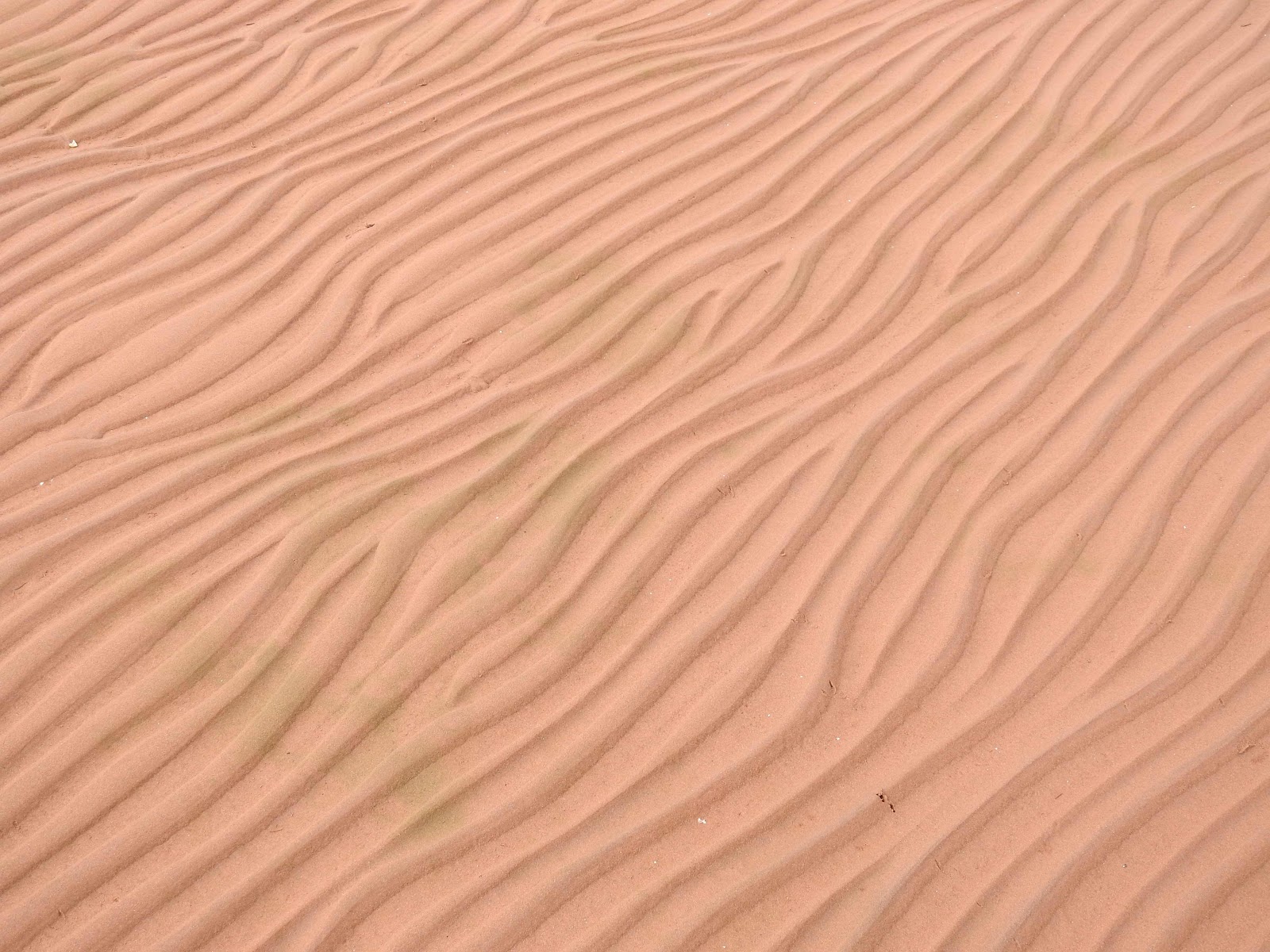 Also, the sand was full of holes made by shelled animals. 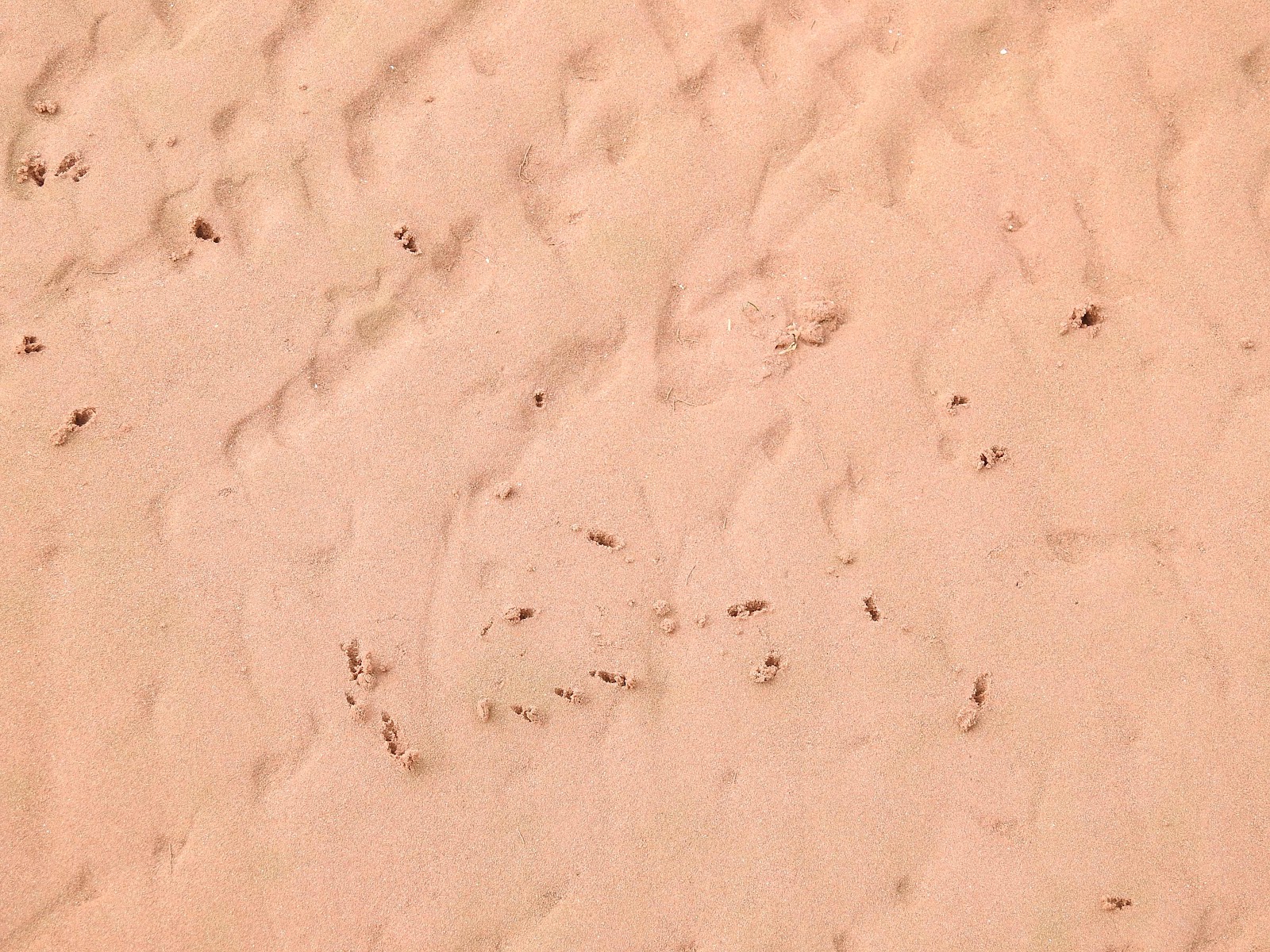 Our grandchildren would love to dig here.

The beach, though not a huge one, is a beauty. 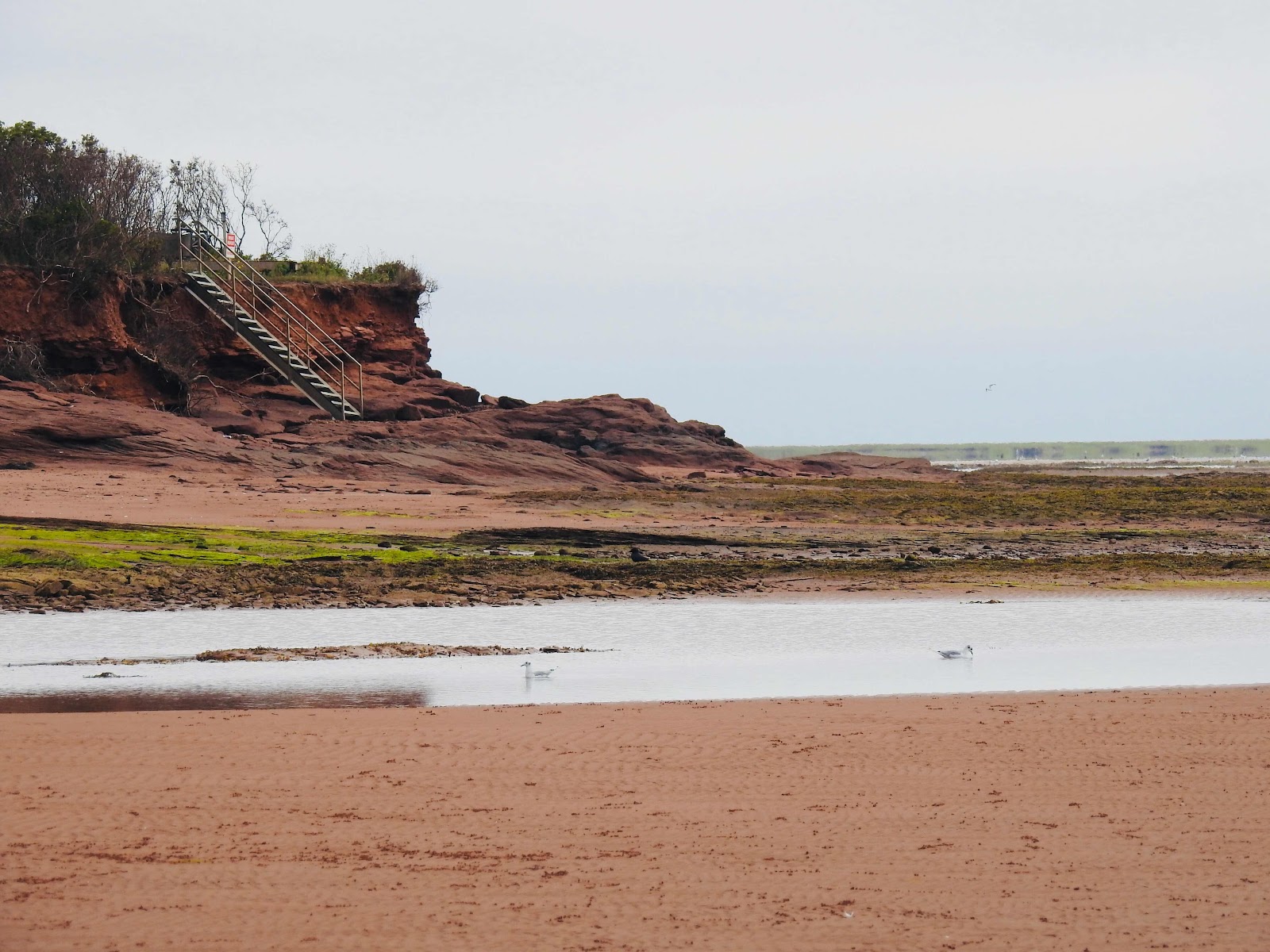 It sits between two points of land in a shallow cove. 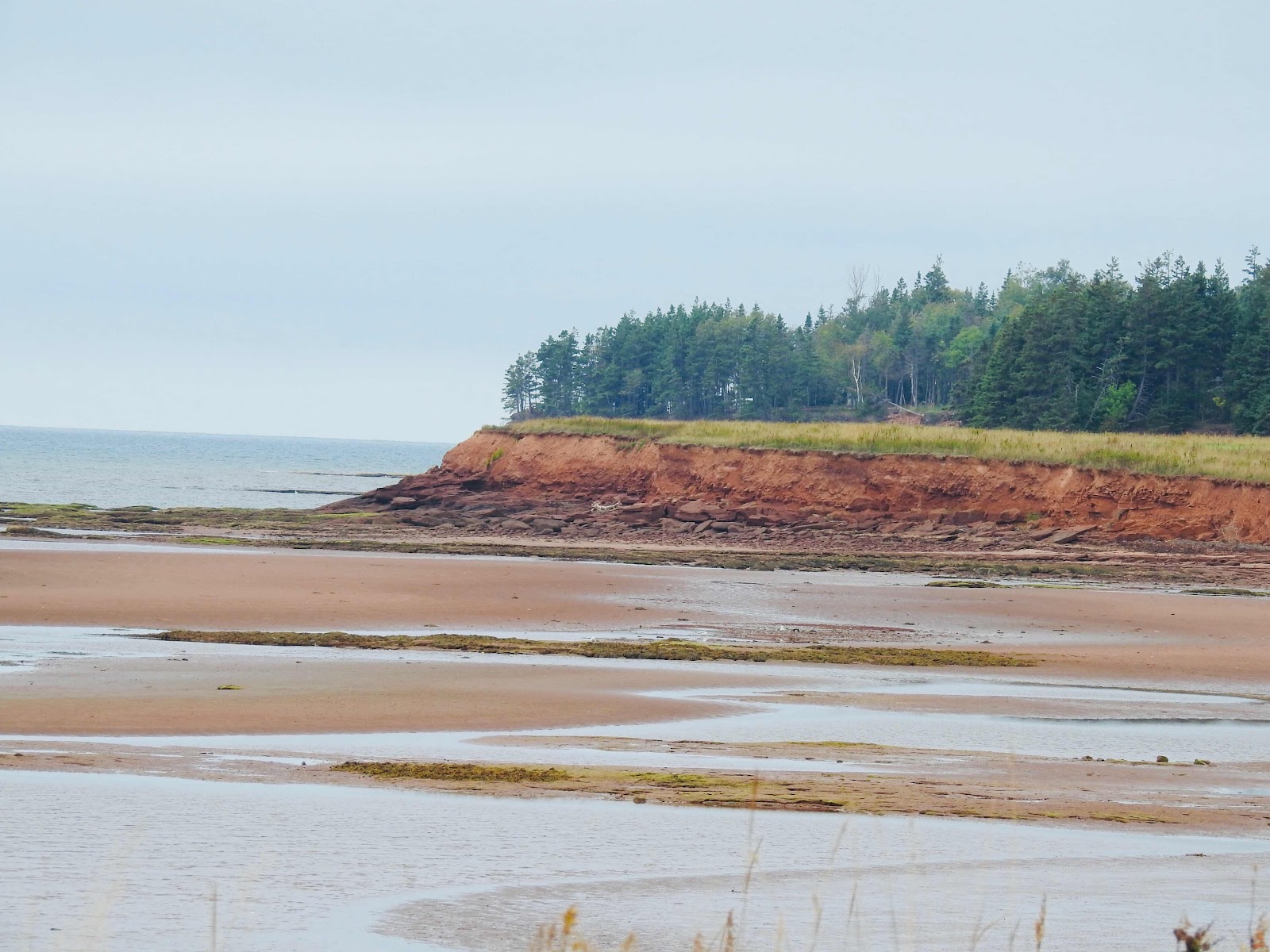 The countryside around is farmland and residential. 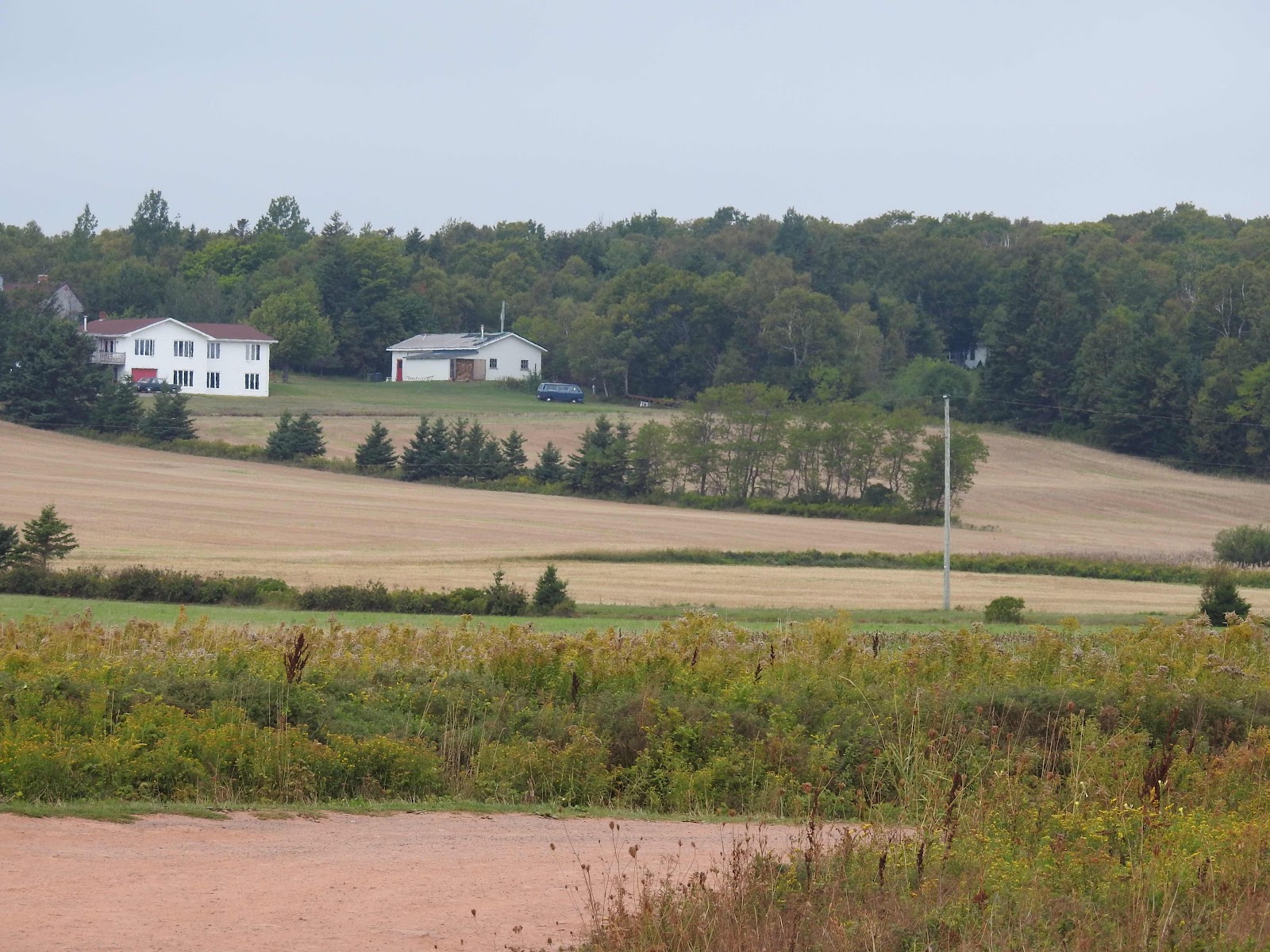 Gulls walked around the tidal pools, the ocean’s remnants easy picking for the scavengers. 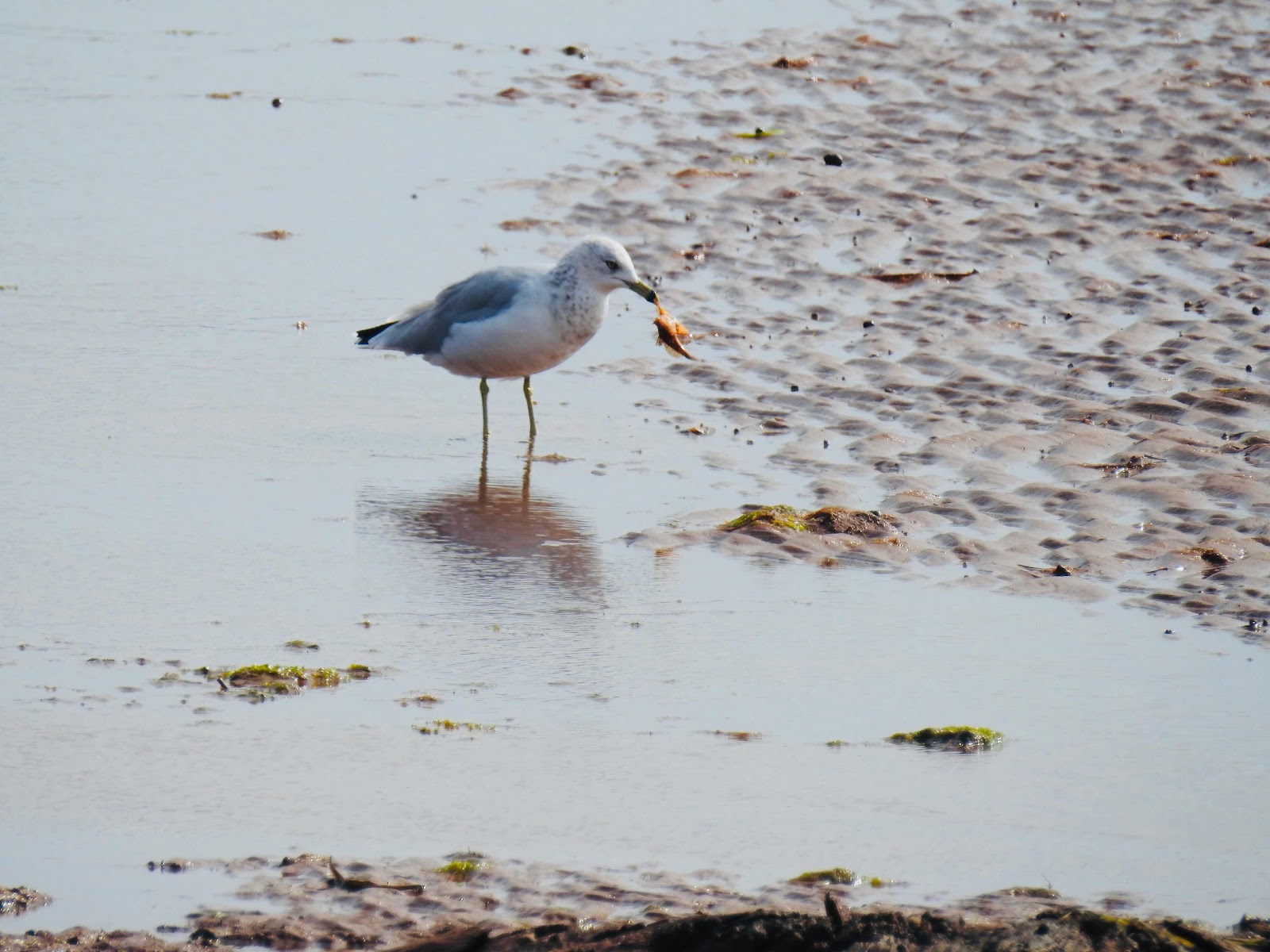 We will visit Rice Point again and bring the grandchildren but it may not be until next summer.

What a treat to see the seals. I don't know anything about them. I assume they migrate for the winter.

How lucky to see the seals Marie, and so many! I hope they are there sunning themselves when you visit with the grandchildren 💜

It's a beautiful place. I would love to walk along that beach at low tide, too. Those are huge seals! :-)

I'm glad you got to see the seals! That is such a beautiful beach. I think one of my favorite shots is the one of the wave shapes in the sand. That is so intriguing! Happy Wednesday :)

What a cute little honey shack! I saw a seal once in Vancouver Harbour.

I can almost smell the salt air. What a beautiful place.

WOnderful post. To see the seals is special. I also love the patterns in the sand.

Another beautiful part of where you live!!!!

Love the idea of tidal pools...

What a beautiful place and to see seals just lounging around is priceless.

The seals look quite relaxed.

Delightful. I'm glad you got to see the seals and explore a new place. Your Grands are going to love it.
Sue

What an amazing and beautiful place. The seals are a bonus. A BIG bonus.
Thank you.

The trail of the back flow of the water is intriguing! I hope your tell us when you learn about it.

What a great place to visit...I would love seeing the seals! And I LOVE the designs in the sand. that first is a great quilting design. I liked seeing the glimpse of the surrounding area.

The seals look like they could be the young of the year.

Hello,
What a beautiful beach, lovely views! The seals are so cute, they look very relaxed. The wildflower honey is delicious! The patterns in the sand look neat. The gull found a bit to eat. Great series. Take care, enjoy your day!

It is so precious to be able to look out and see those seals. The Lake Ontario shoreline holds many attractions, but seals will never be one of them.

So glad you found them, Marie. It is lovely for me to return through your lens. Yesterday we were walking on our pure white, soft sand and watching the waves roll in. Such a contrast to the red sands of PEI, equally beautiful in its own way.

I think your photos of the seals are excellent. The sand design is incredible. Nature is such gifted artist!

A great place to visit! And revisit!

i wonder why it is called rice point ,probably rice are produced in farms near

you managed to share seal image which i am happy about as i think only geographic channel has clue of places where seals live :)

i am intrigued by sand pattern ,so pretty and amazing

We have flocks of seals here, and I like going out to see them on the sands. Yours are delightful so far out to sea.

How exciting to actually see the seals! What a beautiful beach too.

Wow! What a special treat to see all those seals! I'm sure your grandkids would enjoy seeing them too. How fun to explore in that area.

i almost missed this and seals are my favorites!!!!

so cute that little honey sand and such beautiful markings in the sand!!!