It had been below zero overnight and was not much warmer when we arrived at the boardwalk. My husband and I always head to the gazebo first to look out on the harbour and the lighthouse. We look over the saltwater marsh as well, now flooded to a pond by a recent high tide. 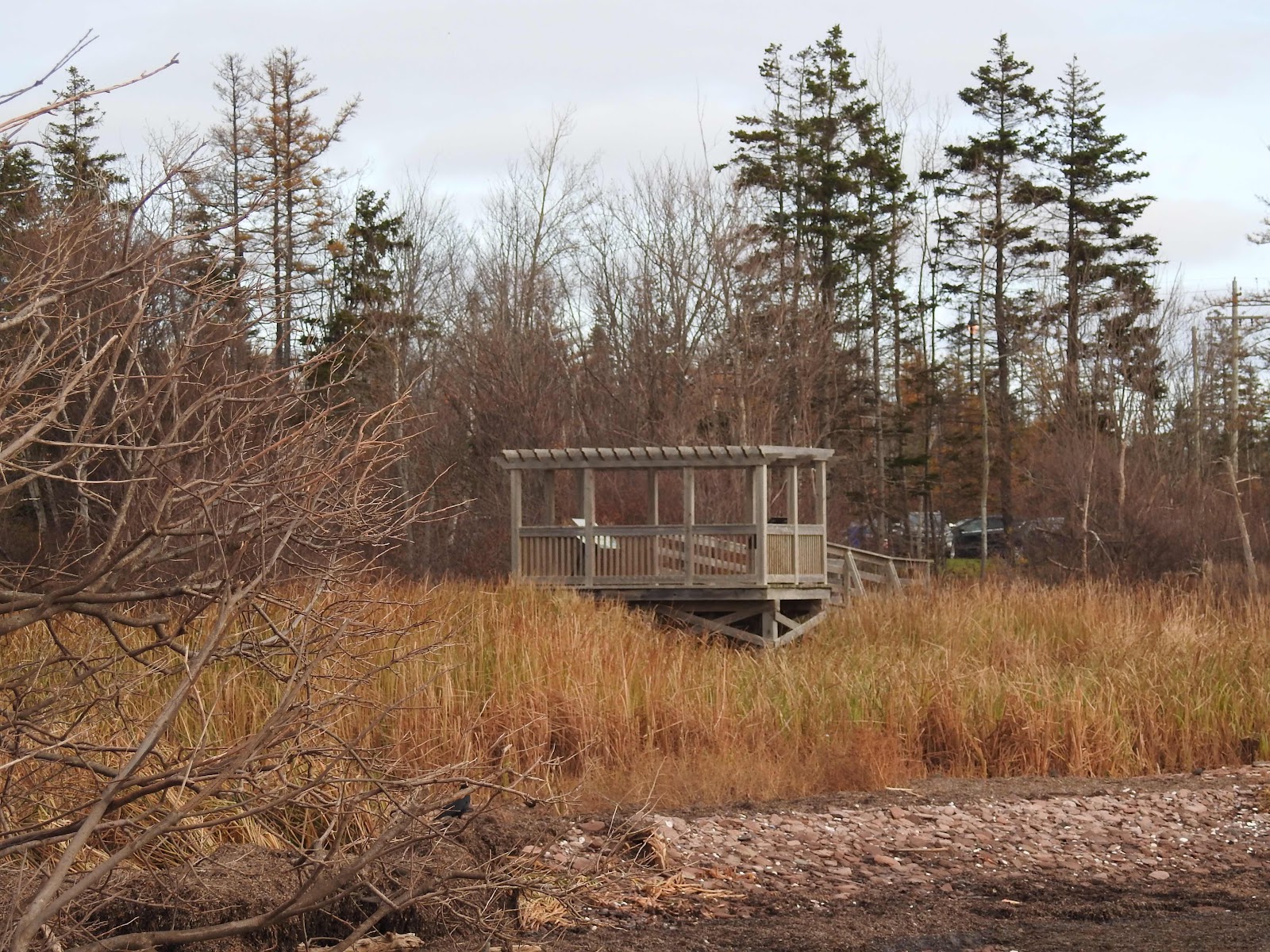 The water below the gazebo was frozen or caught over as Newfoundlanders say.

There were two American Black Ducks swimming in a small area of open water, but you could hear them break the ice as they swam along. 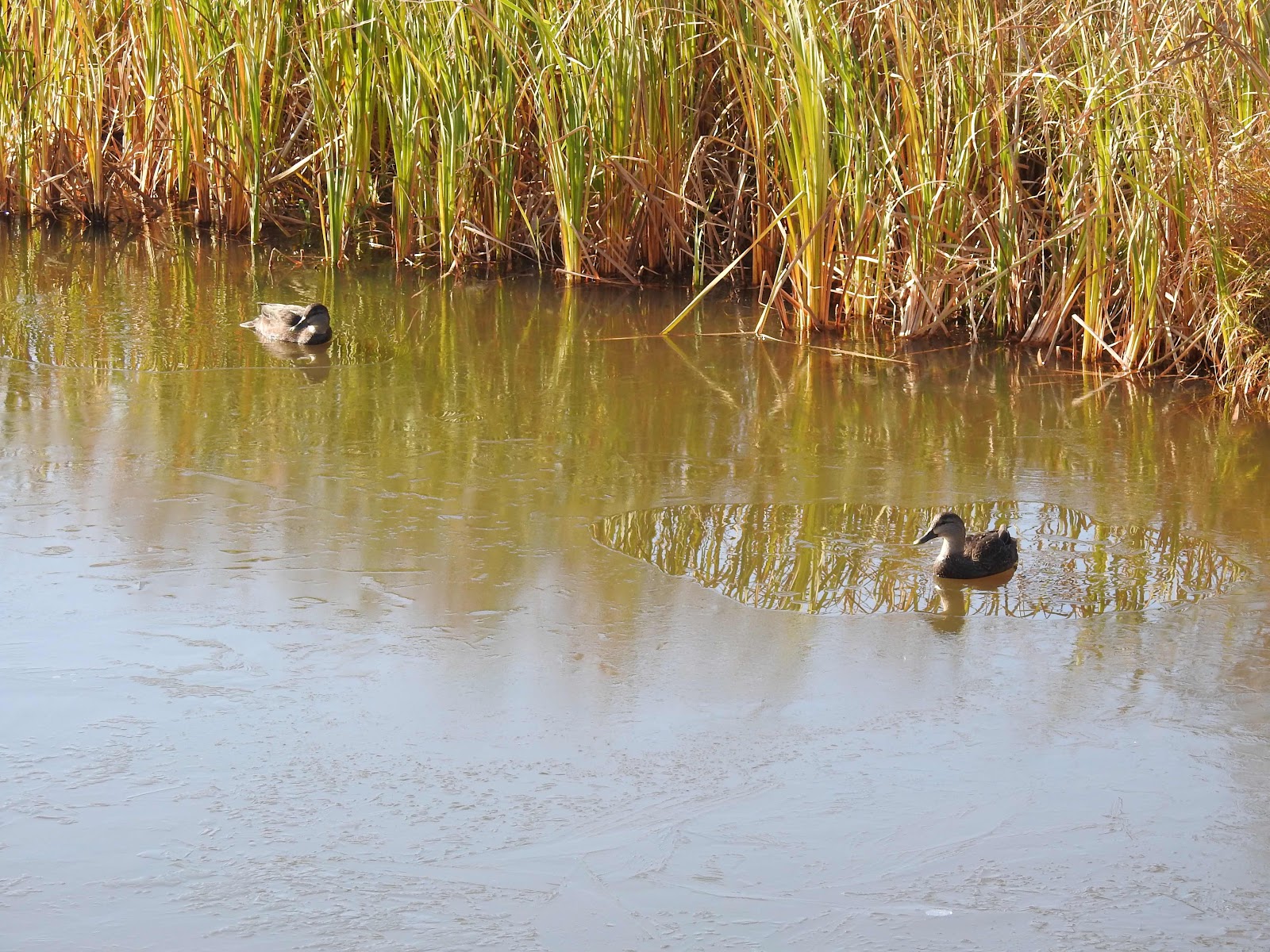 Before long one flew up-stream, leaving the other as the lone ice breaker. 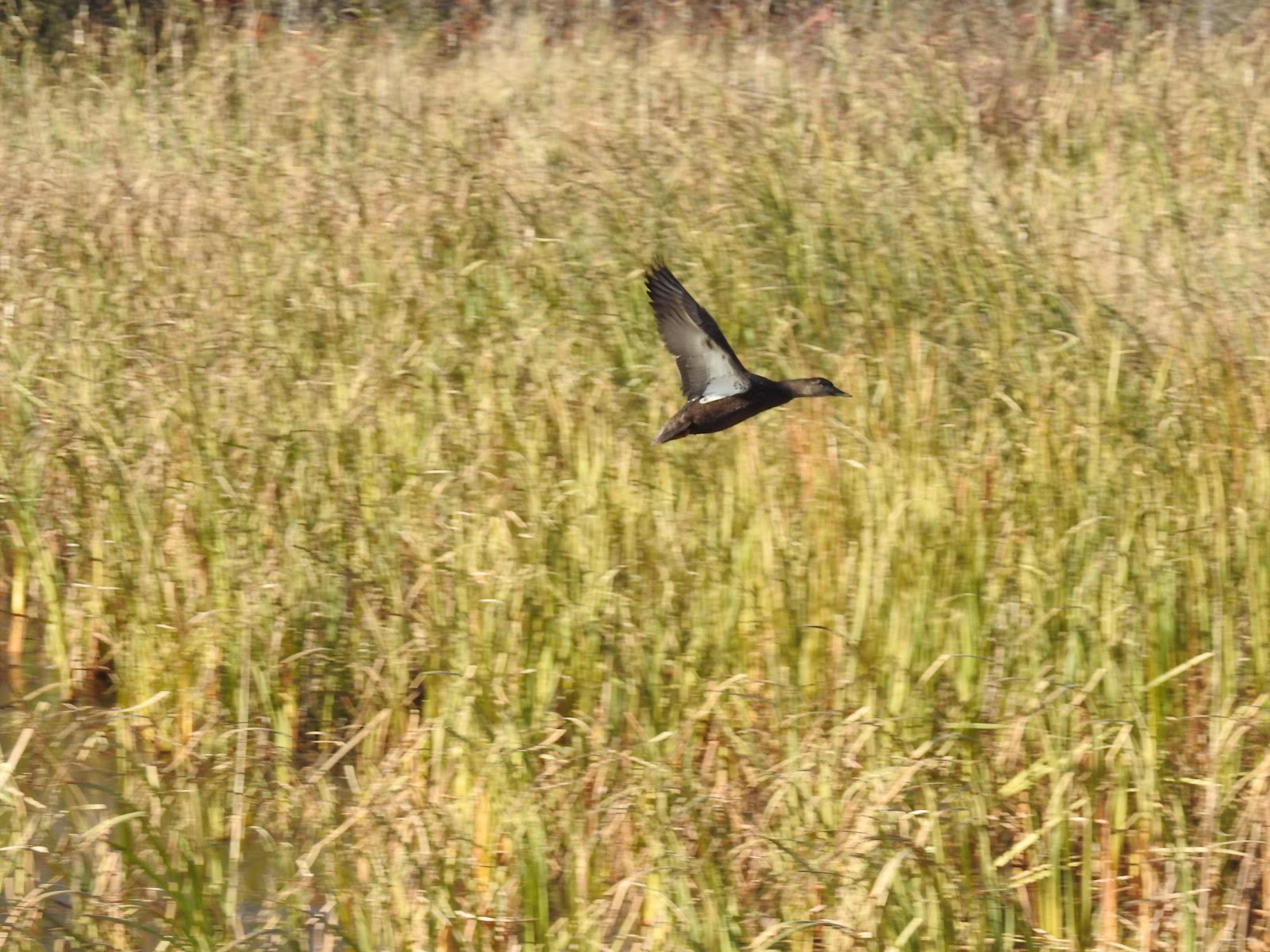 A Red Squirrel, with two rose hips in its mouth, greeted us as we left the gazebo. It looks like squirrels in addition to birds eat the red morsels. There are lots of rose hips along the boardwalk from the wild roses which bloom there most of the summer.

The Black-capped Chickadees have fed from people’s hands for years here. 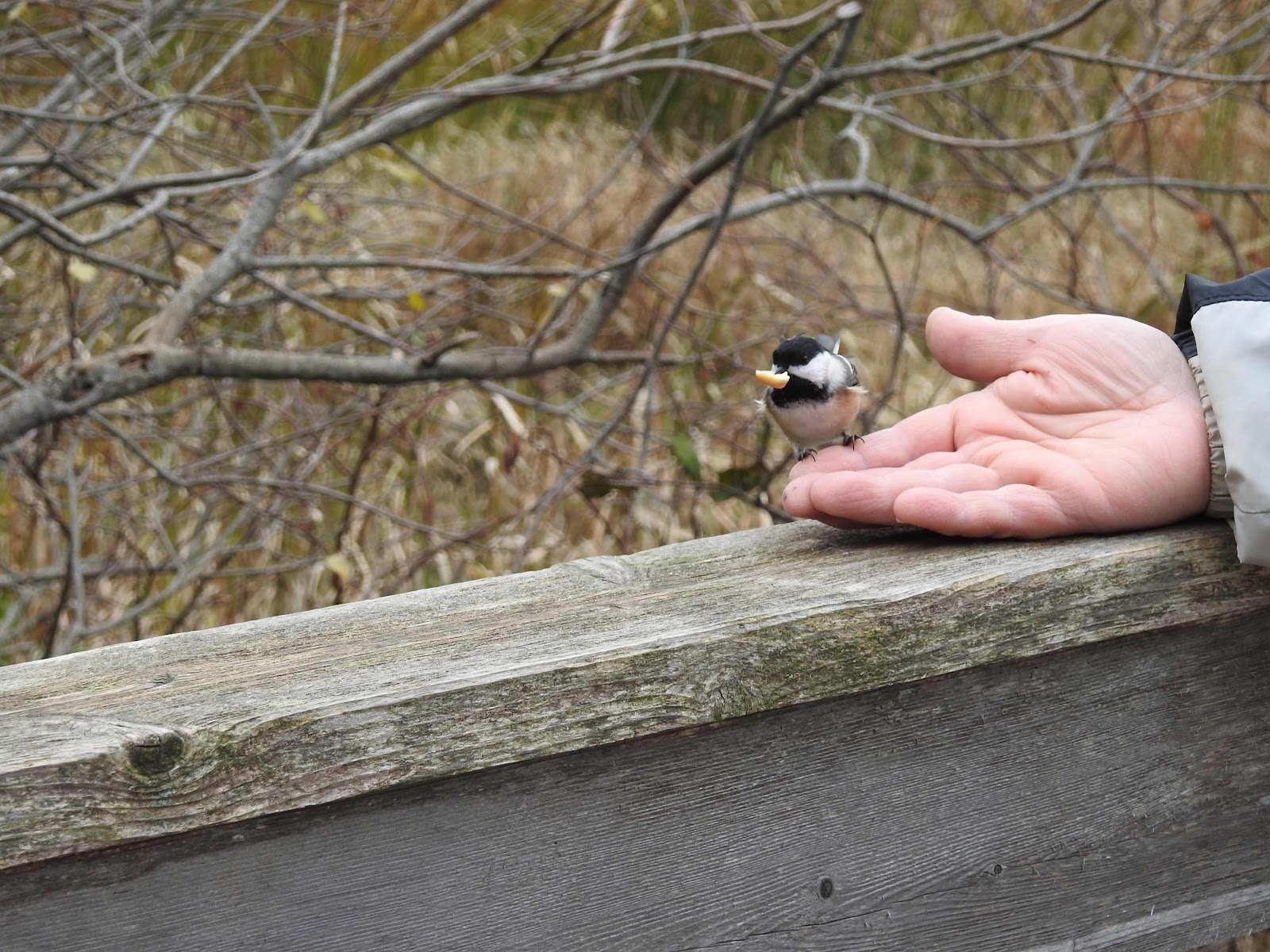 Still it is exciting when one of the little creatures lands on your hand, like a whisper of a touch from a tiny wild animal.

We crack the peanuts for the chickadees while the Blue Jays like the whole peanut as do the squirrels. One chickadee followed me after I had fed it raw peanuts but flew off when it realized I only had a whole one. 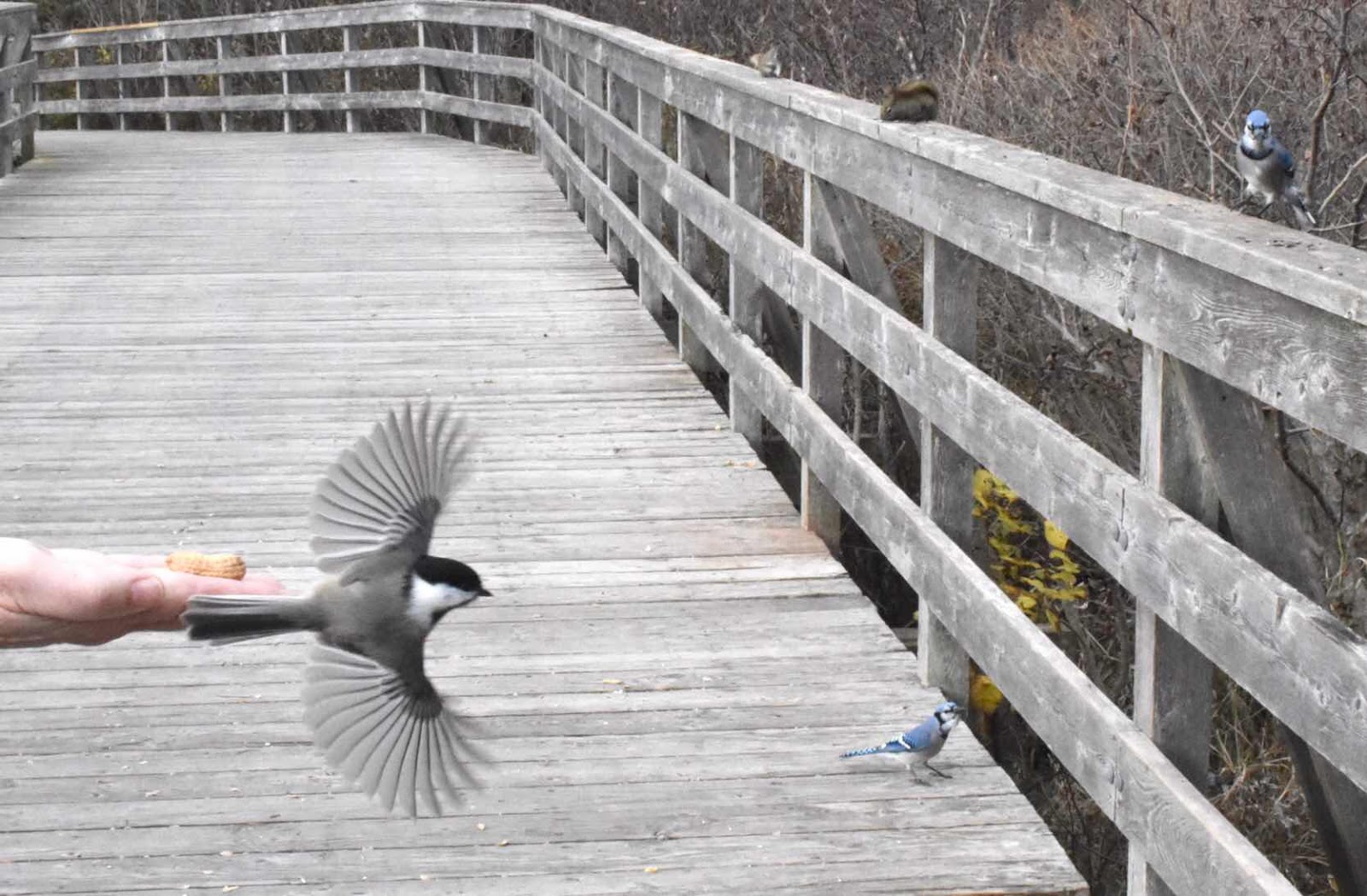 It made for a good photo.

A Red-breasted Nuthatch was interested in the seeds we’d brought too. They are comfortable with people hand feeding them as well. 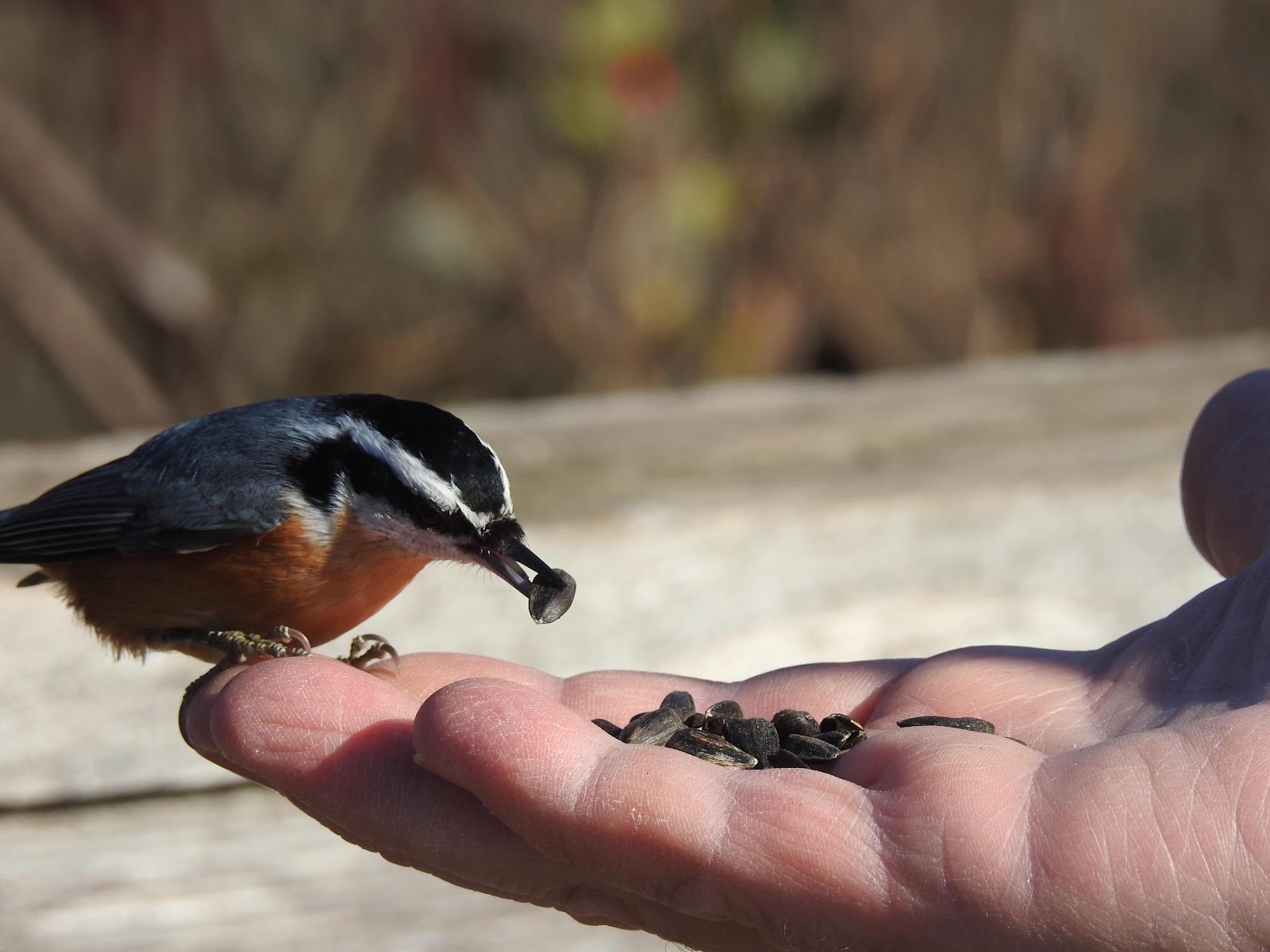 This was a first for us and such a thrill.

The Summerside boardwalk and the animals who live there are a treasure.

It is cold here but not cold enough to freeze the open water. I just love all the birds, great captures of the hand feeding. Great capture of the duck in flight, the red squirrel is pretty. Wonderful photos. Take care, enjoy your day!

The thrill of feeding birds from the hand never gets old, whether you are five or eighty-five. And some species are so confiding! It is a wonderful experience to have this intimate contact with a wild creature.

I am always delighted seeing the chickadees landing and feeding like this.

What a lovely experience!!

How thrilling to be so close to wildlife like this, and your photos capture the intimacy of it all so perfectly.

That's a great shot of a chickadee in flight!

This is so awesome, I would love to experience that! fantastic captures too as always :)

I love those birds. So beautiful!!

Oooh. And ahhhh.
Thank you for sharing these beautiful treasures.

These are wonderful shots, especially the chickadee in flight and the last one. Thank you so much for sharing and making my day so much brighter. :-)

What a wonderful experience to have birds feed from your hands. Like David says, it's a thrill no matter one's age!

I love how you caught the Chickadee in flight. That is beautiful .

It's quite a thrill when these little critters come to your hand.

I think the hand feeders are lovely. I would love to encounter one.

For us too, thank you.

I loved the picture where you show where the duck has broken the ice. I was going to wish you a HAPPY THANKSGIVING but then remembered that yours is over and ours it today.

you saved the best image for last but all of these images are really exceptional!! i have always hoped that i could hand feed a bird, so far, no such luck!!!

Thank You for being
my Dear Blogging Friend!!!

What a delightful, rewarding morning. Just wonderful to have the birds feeding from your hand. I love the image of the chickadee flying off. Great timing and capture.

Hard to believe winter has arrived already in many parts of the world - and I'm sitting here in Saudi Arabia with the AC on 24/7. I really love the capture of the bird in flight. Its wings are just beautiful.

Wow-what fun to have the birds eating from your hand. Our birds here, thanks to the amount of hunting that goes on, are extremely nervous. The blue tit will come to our windowsill, but not if we are close by.
Have a good weekend, Diane

Having birds feed out of your hand is so cool. I wonder if you have hummingbirds on PEI and if they stay over for the winter? Here in Seattle the Anna’s Hummingbird stays all year. One has to do some reading on the web and what I’ve found is that as the climate warms the birds are able to survive the winters along our West Coast all the way up to Vancouver, Canada. I guess that’s one of the silver linings of climate change. For the first time at my current residence I put up two feeders for the hummers at the beginning of last summer. It took a while but now I have a few hummers who are not frightened away when I step out by the feeders. My goal is to have them feed from one of the small feeders that one can hold in their hand. There are pictures of this on the web so I know it can be done. Just going to take some patience and persistence. :-) Thanks for the neat post.

The nuthatches are so sweet Marie, what a treat to have them eat out of your hand. Your boardwalks are a constant source of delight in one way or another on every walk 🐦

I want to come for a walk with you! I so would love that! (Birds feeding direct from my hand.)

what a blessed life while having so many pretty ,cute and lovely birds and animals around dear Marie :)

how fantastic these images are ,you are wonderful ,excellent photographer indeed ,specially bird flying from hand wow this was brilliant capture
feeding bird on hand wow this is most sweet thing i see here ,mom's parrot were so friendly and would sit on shoulder and hand or arm ,i had only that experience :)