The salt marsh which is sometimes a pond along the boardwalk is changed again. A recent storm removed the seaweed and sand which provided a dam at the mouth of the pond. Now the pond is gone and a stream is back in its place. You can see the opening to the harbour in the photo. 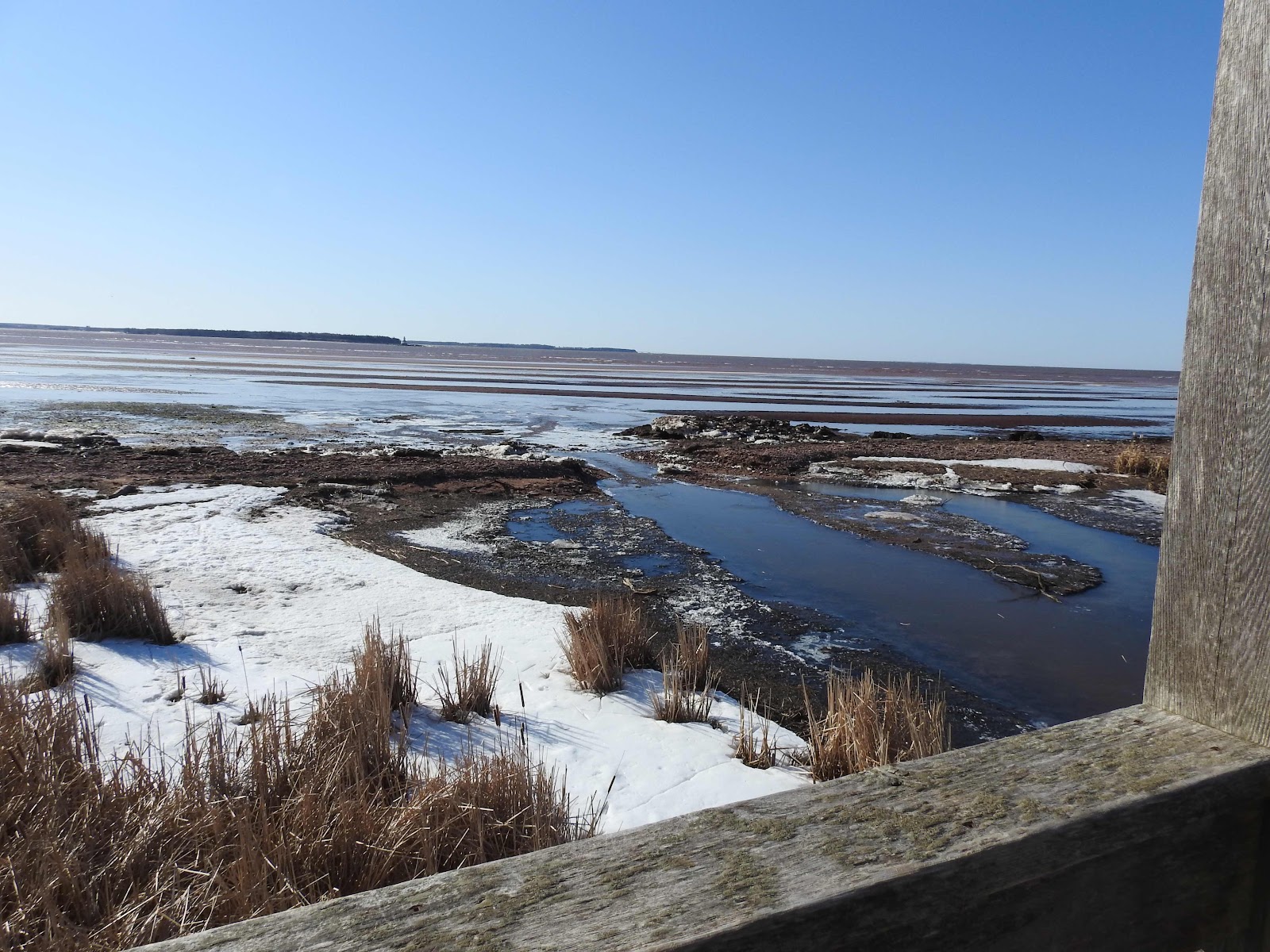 The poor American Black Ducks which call the area home don’t have enough depth to swim in places. Now we see them on the beach most days. Another storm is required to wash seaweed and sand back into the opening in the natural dam. I hope the ducks get their home back in their favourite condition soon. 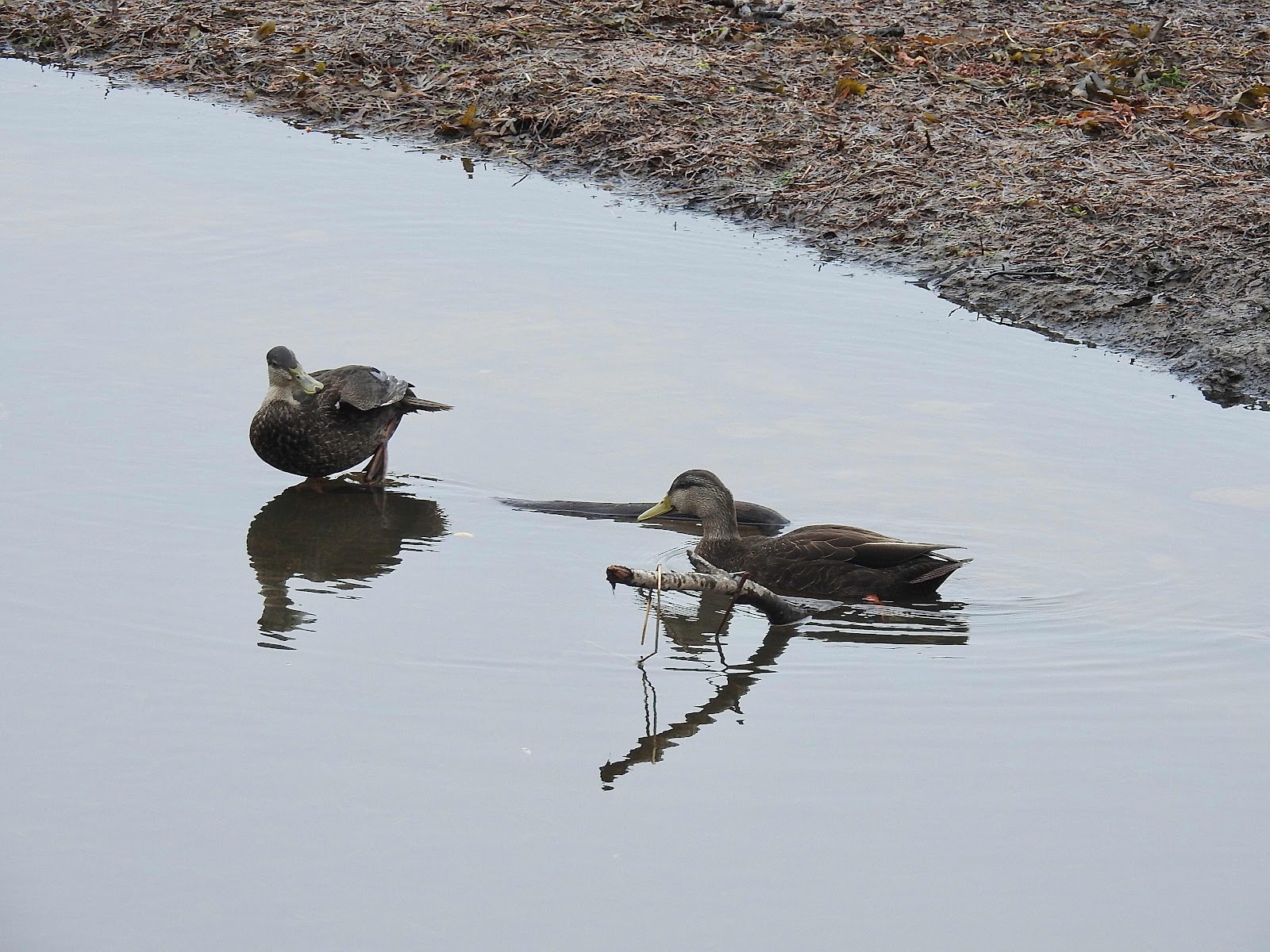 Late in March, a pair of Kildeer were back in the marsh area. A pair hung out there last summer. Could they be the same birds? 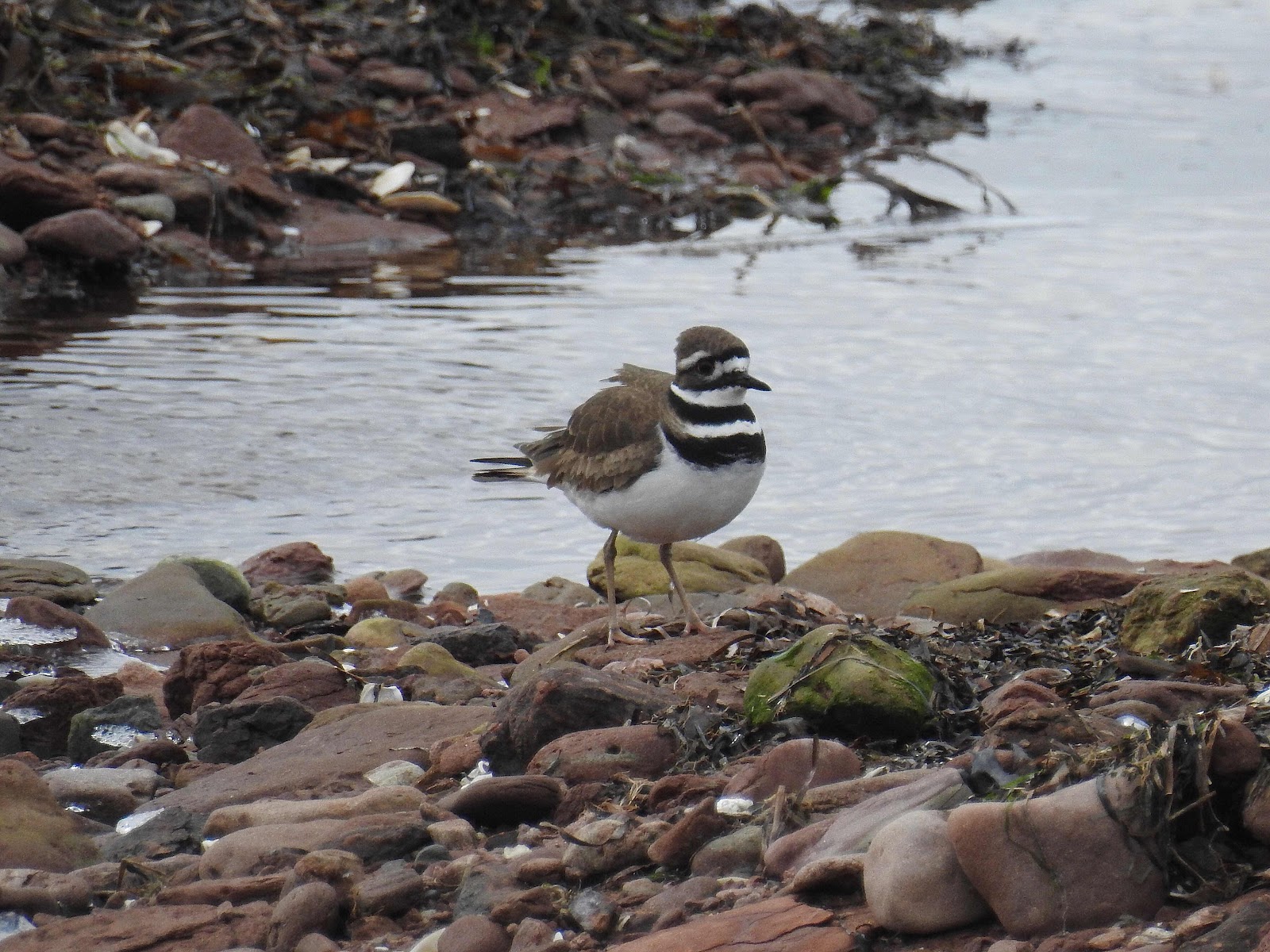 One day recently, this Hairy Woodpecker was interested in the senior taking her photo. 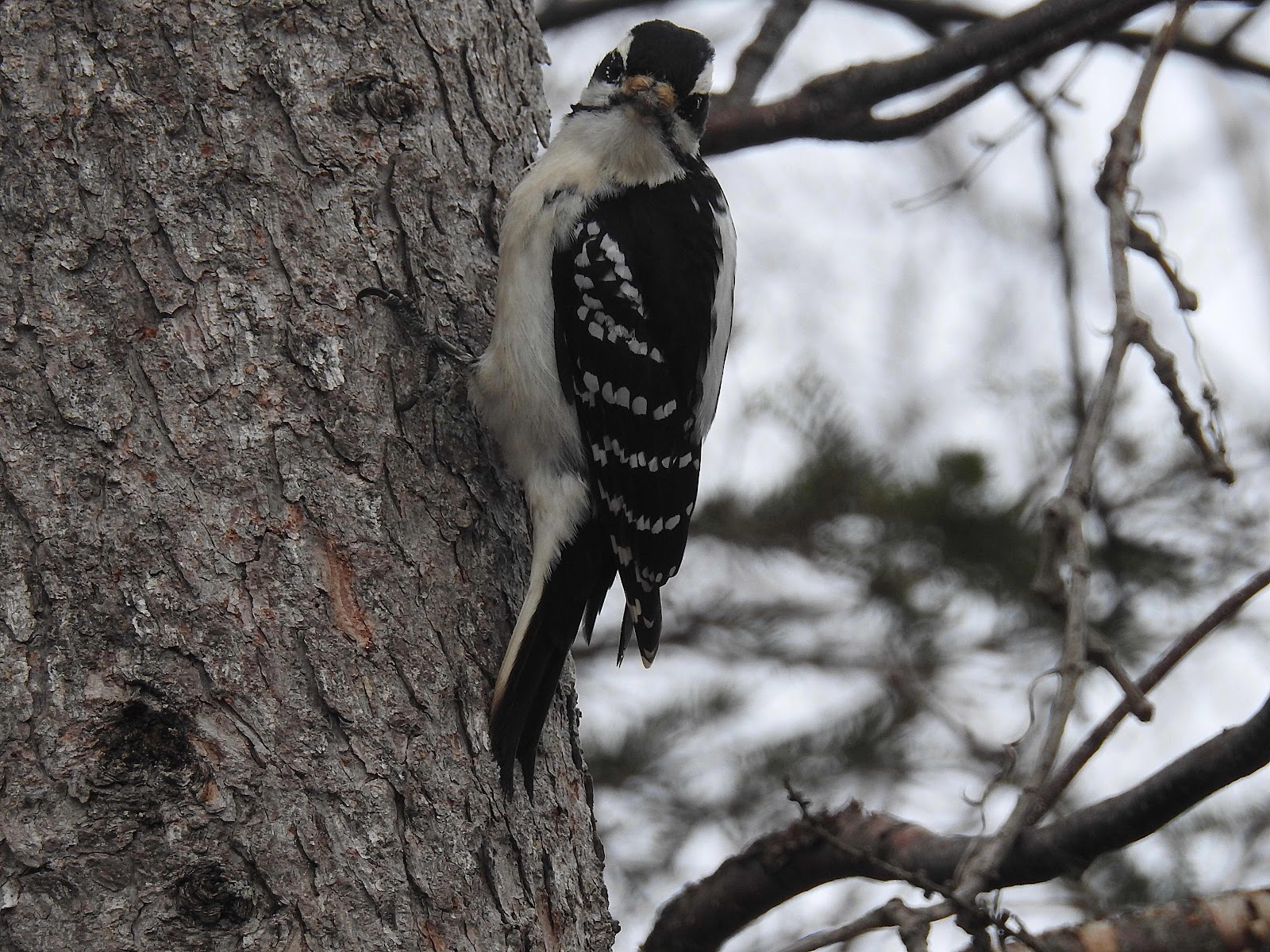 The American Robins were back on the island during the last few days of March. 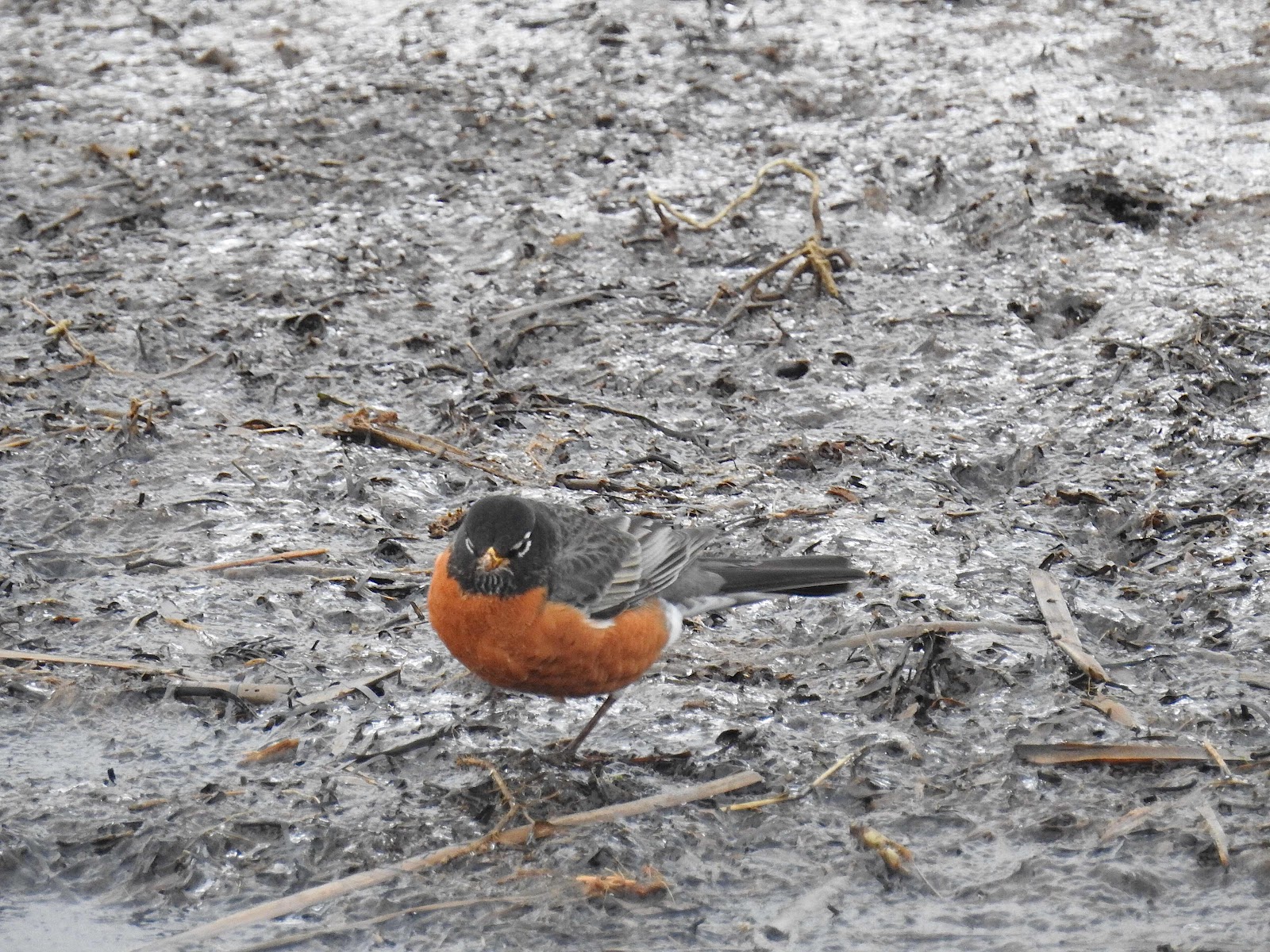 A Black-capped Chickadee landed on the bridge while I was there. I placed my hand in my pocket and the little bird flew around my head. I imagine it expected some food. 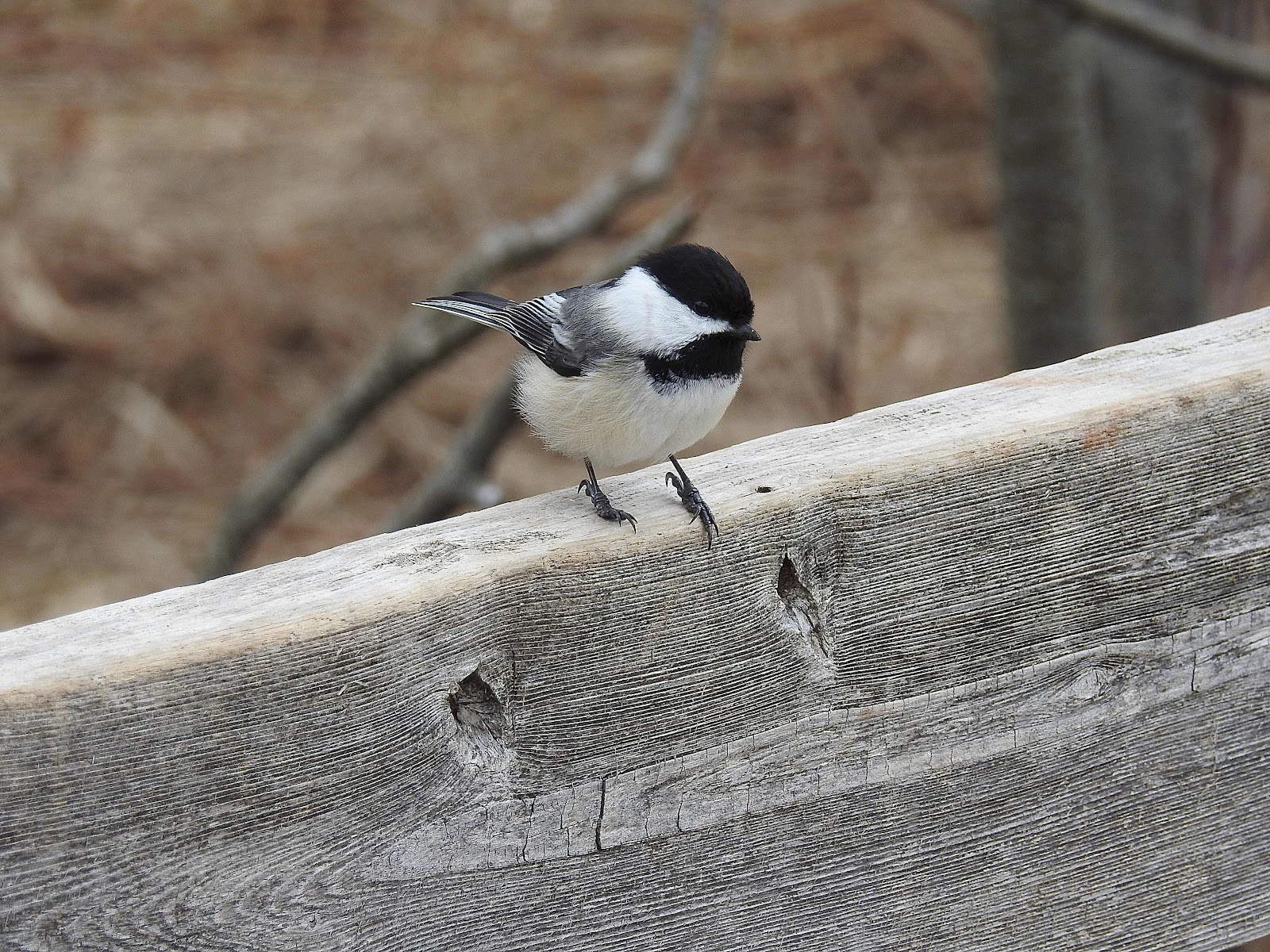 Mourning Doves like to pick seeds off the bridge when there aren’t any walkers around. 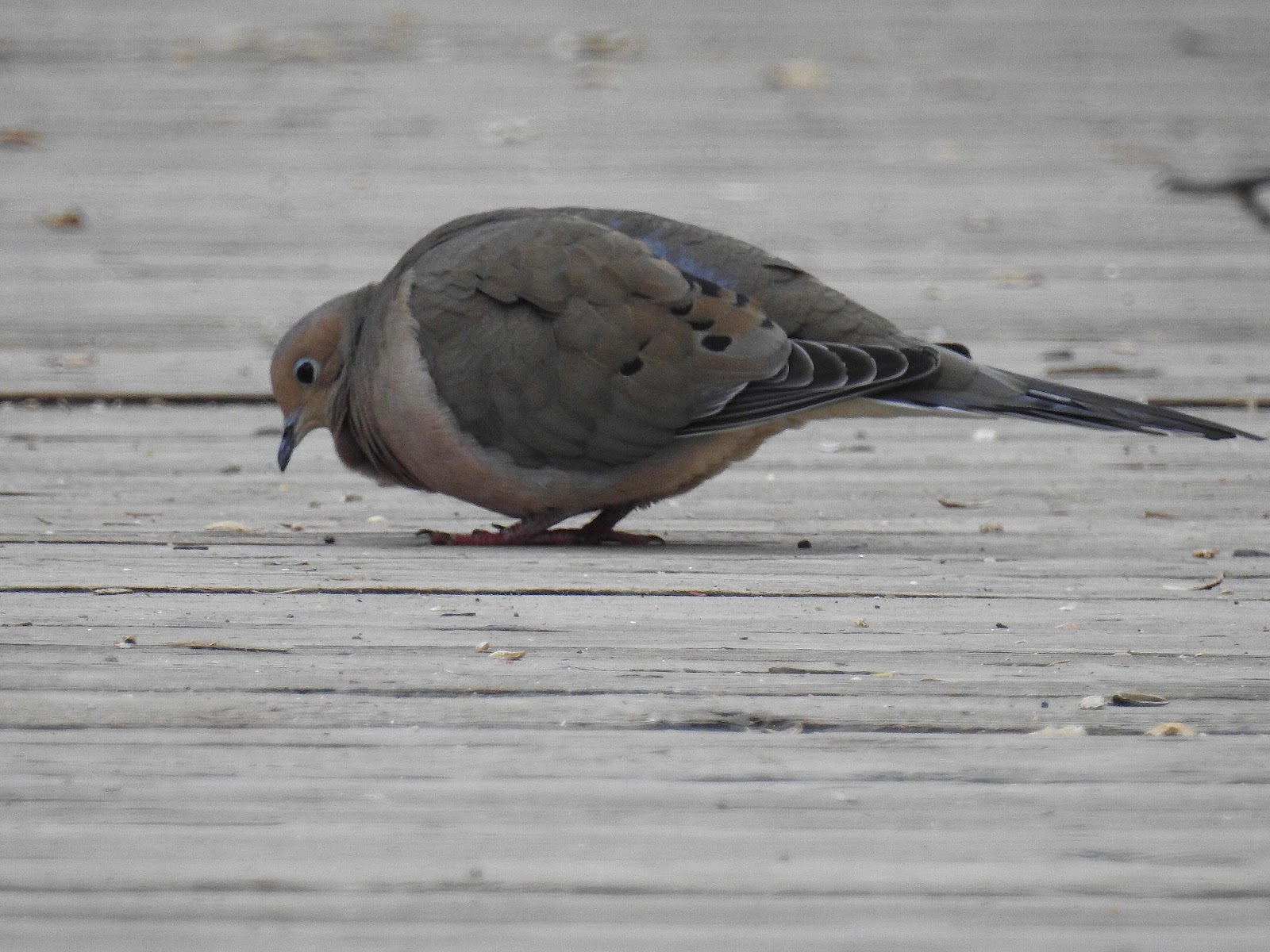 Dozens of Song Sparrows sing their greetings all along the boardwalk. Several were busy on the bridge collecting seeds one day. These tiny birds have powerful voices and their songs fill the air. 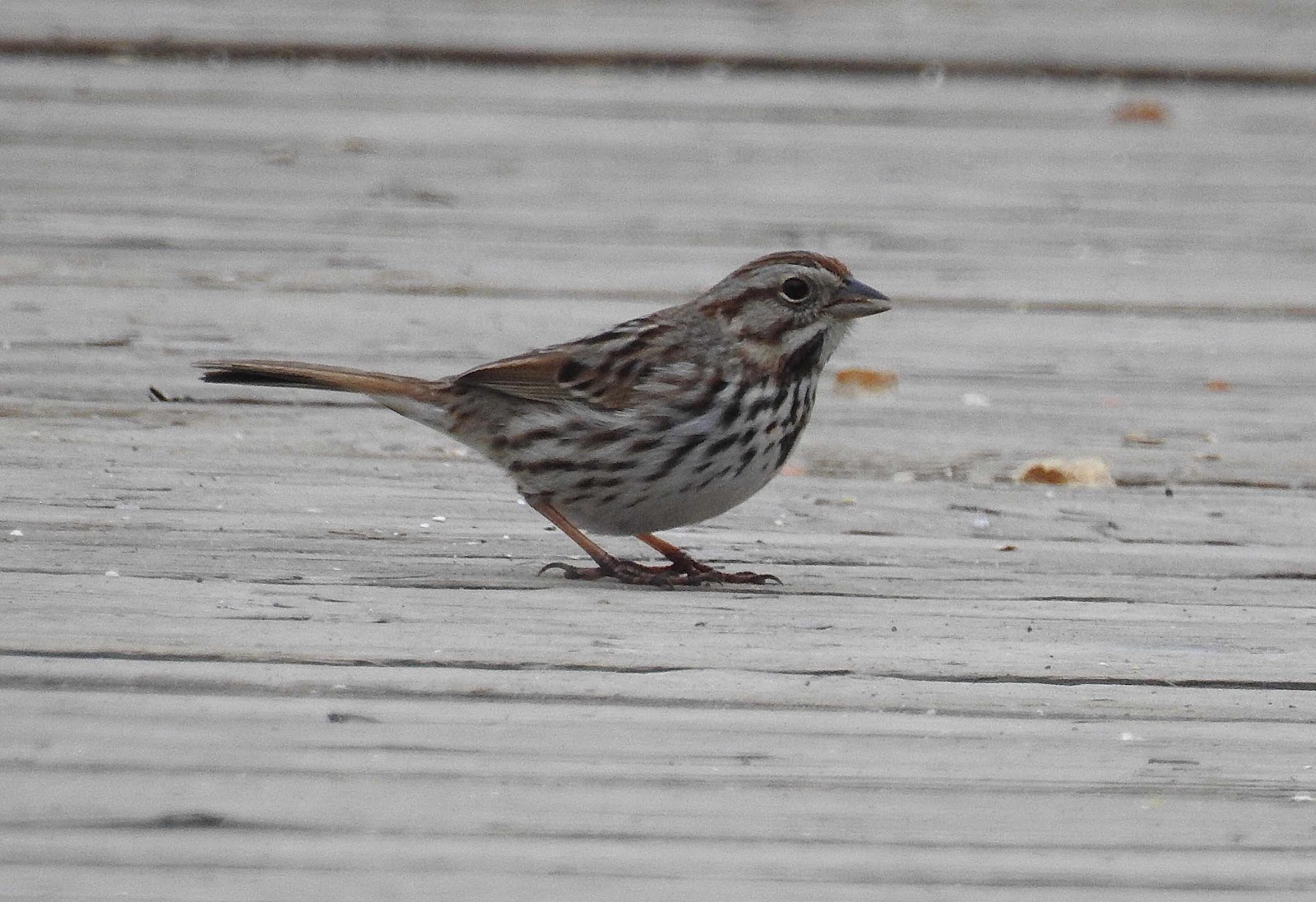 Tree Sparrows continue to visit the bridge as well. 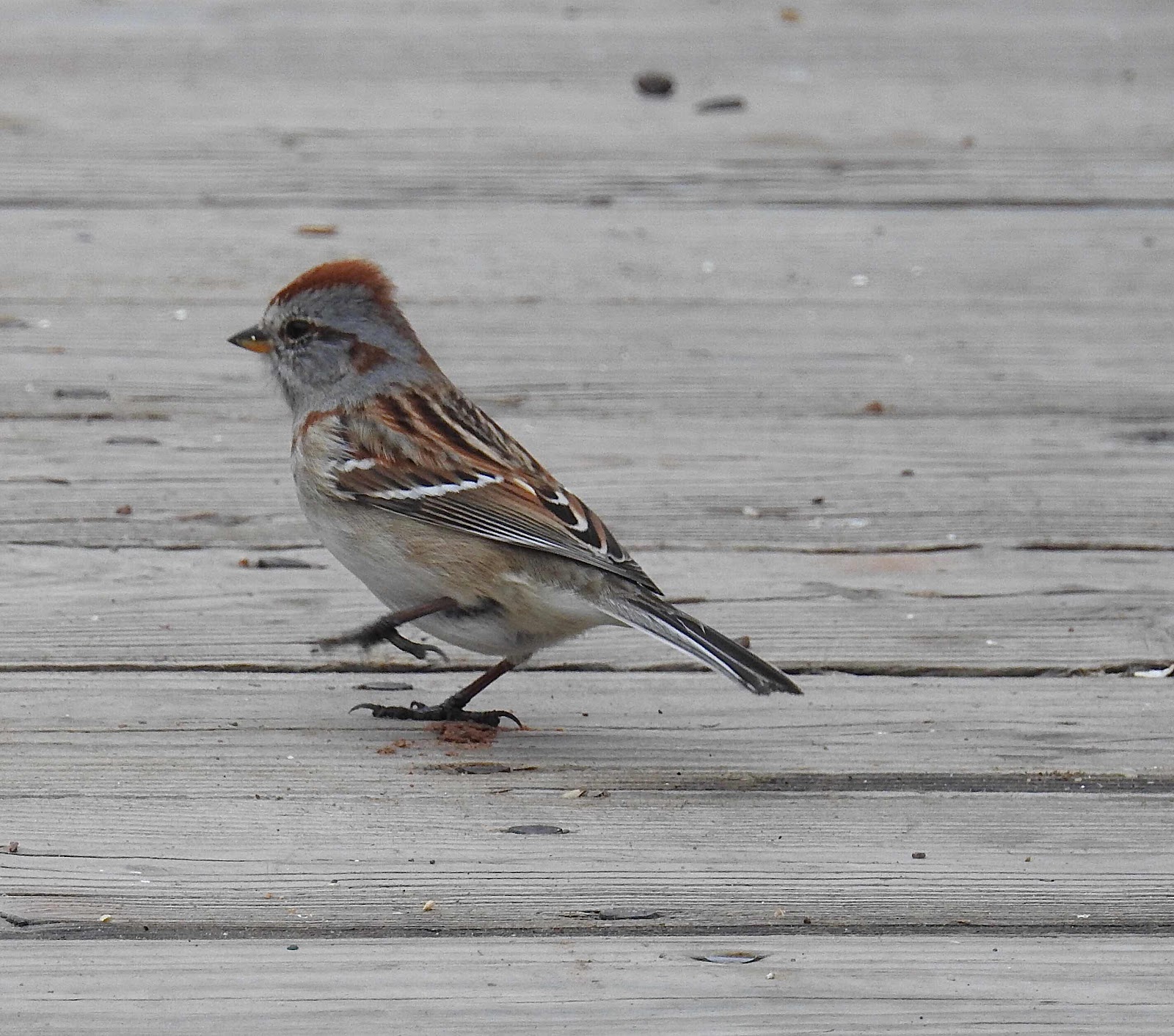 A Red-winged Blackbird  finally stood still long enough for me to photograph him. We have heard their chatter for a few weeks. 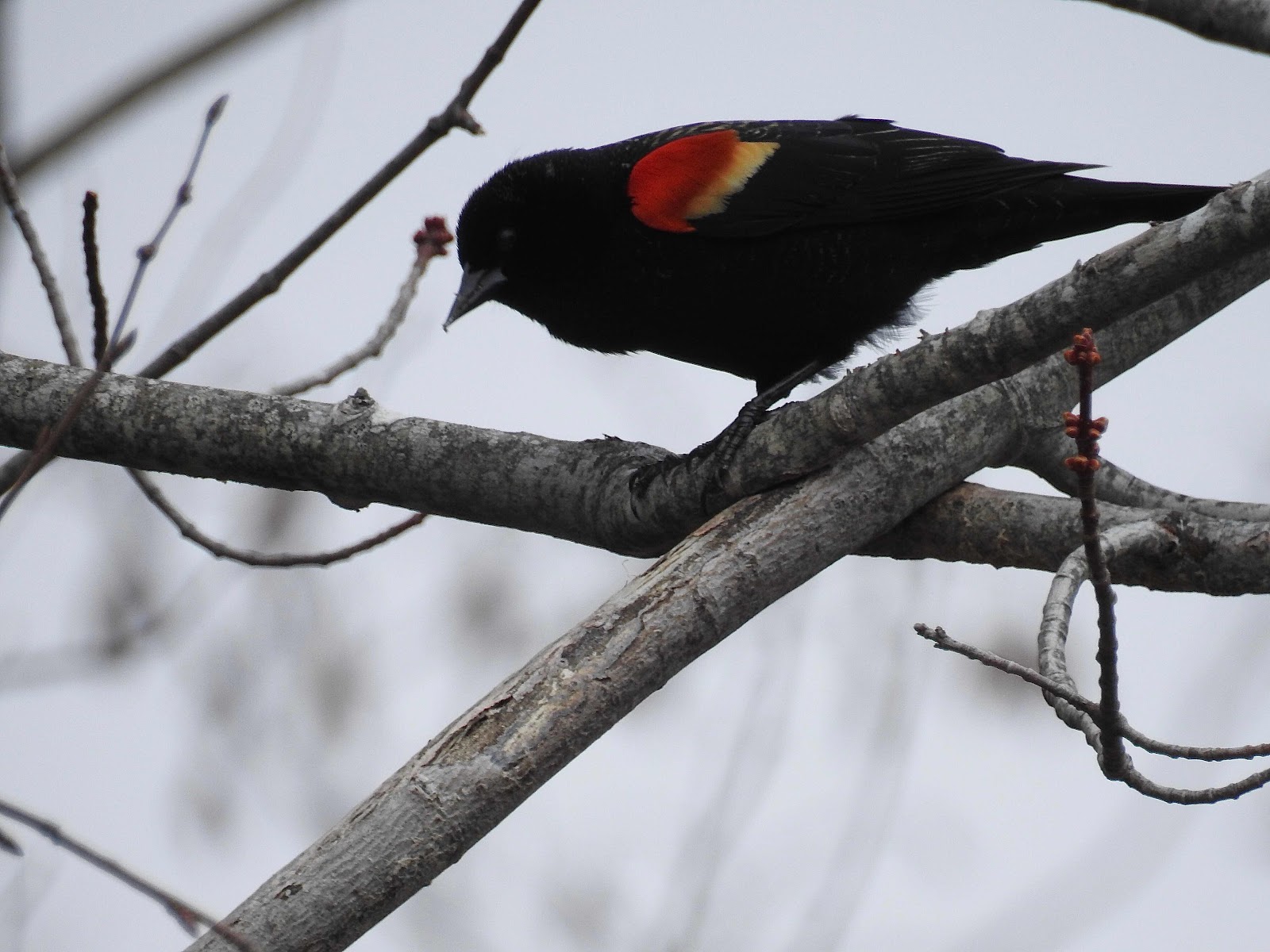 The Blue Jays along the boardwalk are always talkative. Their voices dominate any choir. 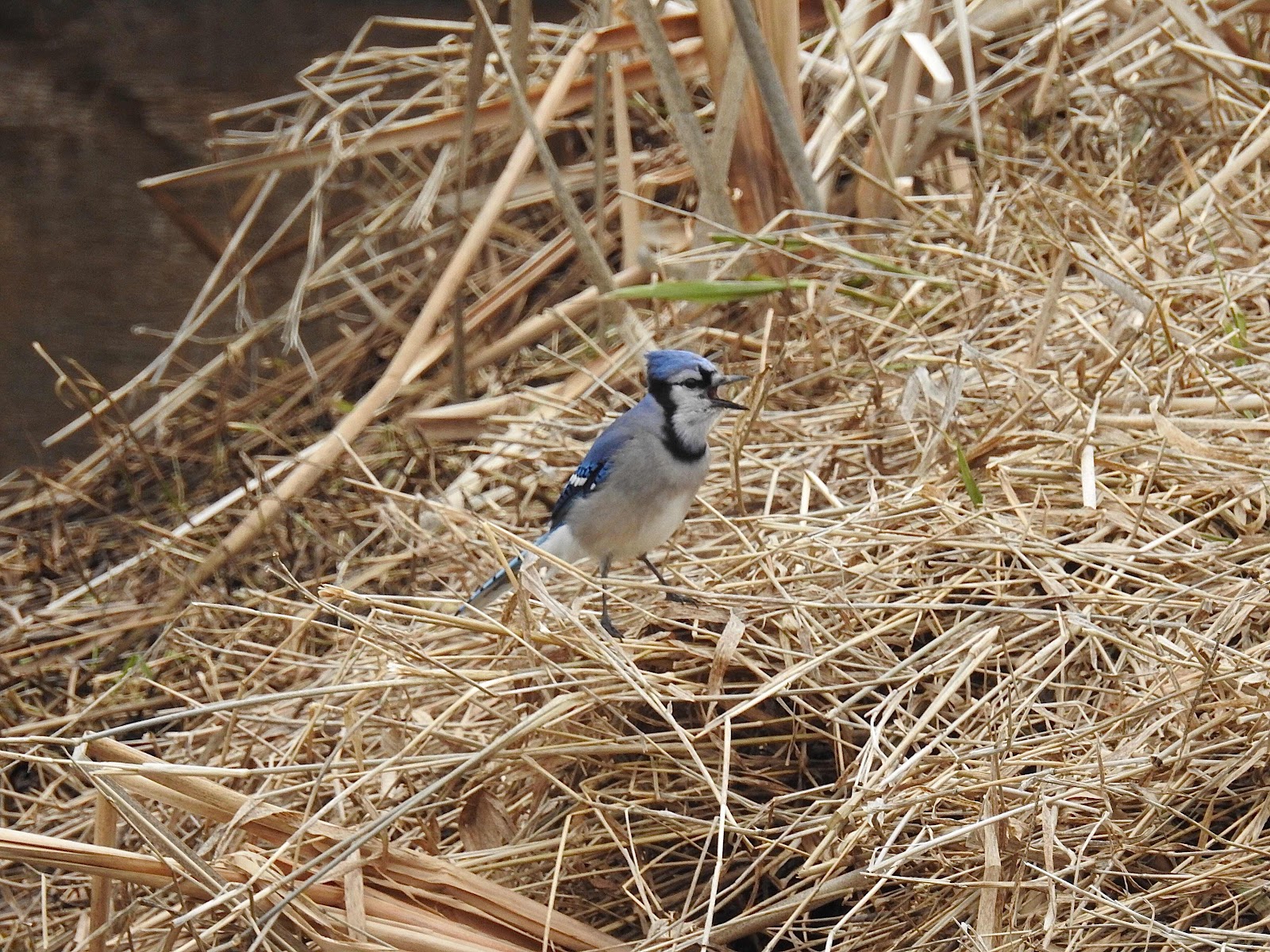 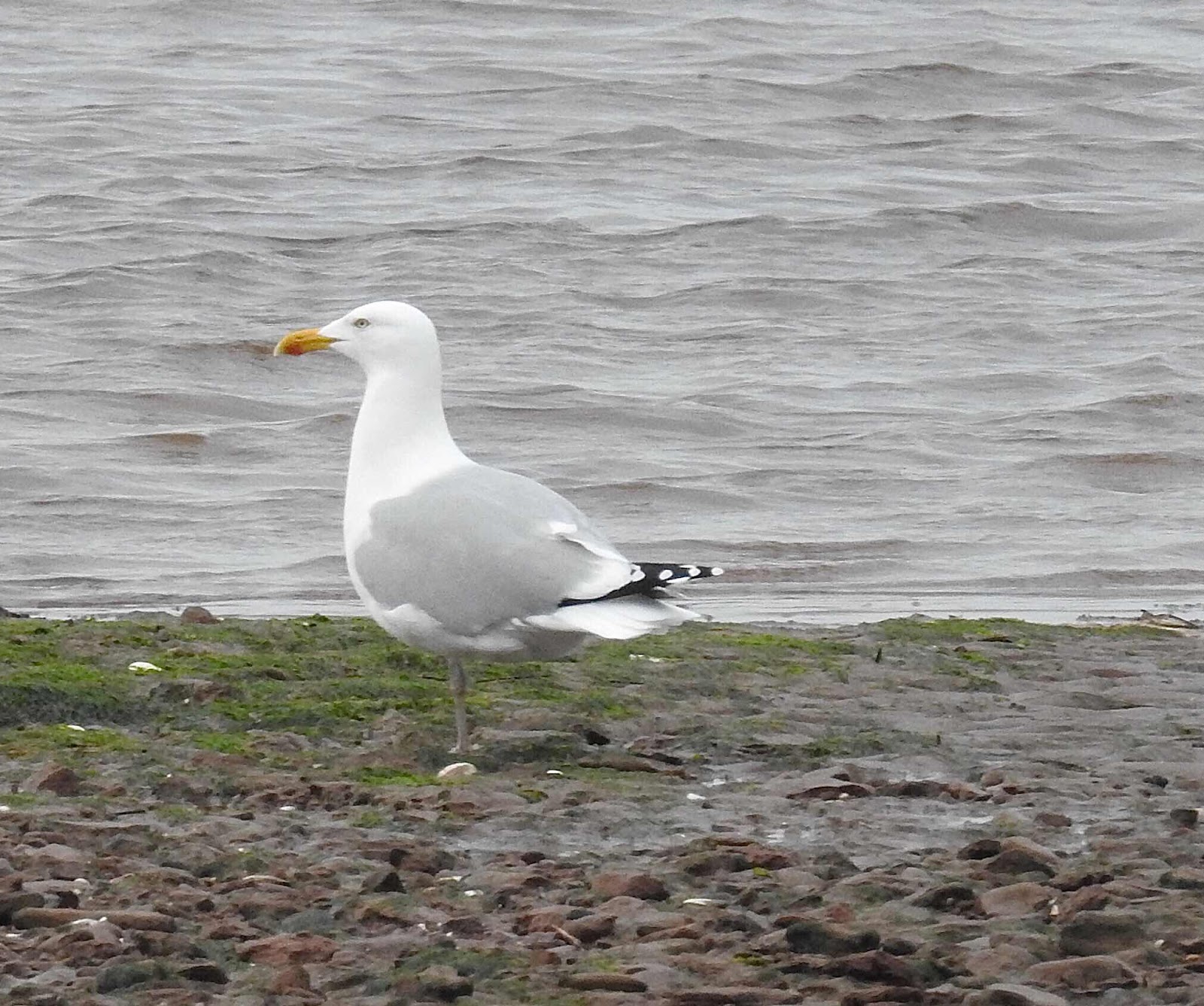 and a Ring-billed Gull 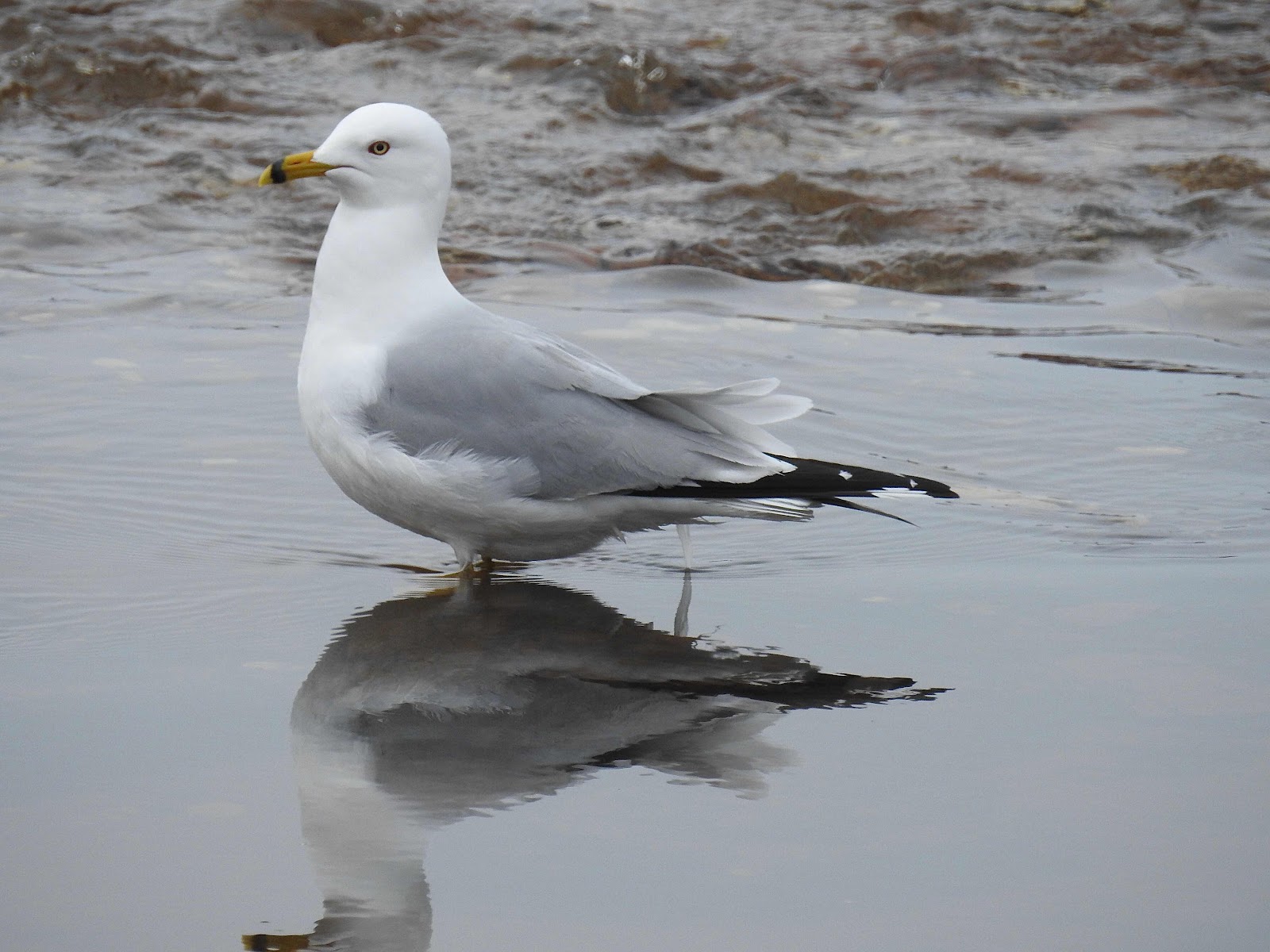 are from a flock of various gull species enjoying the harbour these days.

The harbour/boardwalk area is an avian paradise despite the cold so far this spring.

Beautiful photos of your birds Marie. My favorites are the pretty black-capped chickadee and the tiny sparrows! The sparrows here also have powerful voices.
They are good at singing!!
Have a good day!

Such wonderful birds! And quite nice portraits of them all, as well. Thank you for the visit to the shore.

The first robin of Spring! They haven't shown up here yet though.

Oh I can't even begin to tell you how much I enjoyed seeing your wonderful bird shots here Marie. I love all of them but the tiny birds are my favourite, so sweet and such pretty colours, how lucky you are to see them 💛

Glorious bird photos Marie. Amazing the speed with which the coastal areas can change. Imagine coming home to find your house remodeled. The birds adjust better than I would. :-)

Yes, hope, ducks can swim back to their natural places

What a great variety of birds and pretty scenery! The Chickadee and Tree Sparrow are a few of my favorites. Take care, have a great day!

So many exceptional little bird shots Marie. I love each and every one!

wonderful!! gorgeous ducks and birds!! i often wonder about the birds, robins always build a nest in the wreath on my front door. is it the same bird??? i see all of these here except the tree sparrow, i don't think i see them!!

curious critters...as curious about us as we are of them!! what a great post!!

Wow such a beautiful bird post!Ilike all of them,many I have not seen before

Thank you for sharing!

Beautiful series of bird photos. You captured quite a variety of birds. Thanks for sharing, Marie.

I adore your fantastic feathered friends. Thank you.

What a lovely and amazing variety of birdlife in this post. I loved seeing them all, and reading of the natural dam created for the ducks each season. I hope they can soon return there.

Burr, the first picture made me cold with the snow. Wonderful up close pictures of the birds. You must be quite talented to be able to snap the shutter at the right time.

It is amazing how the weather can change the countryside so much. Love all the bird photos. Keep safe Diane

The coasts are always changing - the sea giveth and the sea taketh away! What a fine collection of birds to accompany any walk.

With all those birds around, I don’t think I'd get a lot of walking done.

All those songbirds habituated the yard at my old house. Nice to see old friends again.

With The Pond Receding Like My Hair Line, Do You Ever Discover Sea Glass?? Fantastic Photos For Sure

If you're out often enough You'll know where the birds will hang out.

Such wonderful shots of all those birds! I love the way the woodpecker is able to hold onto the trunk of the tree.

Plenty of robins now.
Coffee is on and stay safe

Wow, Marie - what an amazing variety of lovely birds! You're so lucky to have so much beautiful nature around you!

Nice series, Marie. I am sure the Black Ducks will cope with the vicissitudes if the tides. The female should be laying eggs anytime soon.

Avian Paradise for sure!
Love all the photos, especially the Jay giving his opinion on the day's events.
Great captures of nature's finest.
Sue

Oh, what a lot of fun all these birds are.

These are spectacular. Birds with personality. We have a robin that is in a bad mood too. You are a really excellent bird photographer.

Coastlines can change so rapidly when a storm hits. It seems the one constant in nature is change :)

A delightful post, Marie. I've enjoyed seeing all these birds returning to PEI.

Lovely to see all the birds enjoying some sunny weather. Lots of birds around my house too, especially so may robins.

Gorgeous captures you have here!!
I need a camera like yours and, needless to say, your talent!!

You have some wonderful birds. I love the kildeer and your chickadees are very similar to our tits.

Ohhhh, you commented that you are becoming Gluten Free. How wonderful!

I suffered with all sorts of gut issues and IBS for years! Did not get tested for Gluten, just cut it out. And I was free of IBS!!!!!

It was so worth the issues, to become Gluten Free. Which (issues)
are much fewer, now days. There are many "substitutes" today.

You said 'becoming.' My suggestion is to go all the way! It's the best way, to really notice the happy differences, in how you feel. -smile-

Lovely photos!! How nice you have a boardwalk to walk on, something this Island is missing. I love Spring and renewal.🌸

I so love your pics of all the birds. Beautiful. And what an amazing place to live.

I feel I just took a walk with you as you photographed these lovely birds. Thanks for the pictures and the names of the birds.

Oh. You hot some wonderful.photos of the birds. I cannot pick a favorite.

Beautiful bird photos
Ring billed gull, I saw one at Lake Champlain today. I was wondering what kind of gull it is. Thank you

Oh thank you sooooo much for sharing these incredibly beautiful images dear Marie .they reminded me my native town where i would see so many like these in winters ,such a variety and astonishing beauty indeed
thank you again fr catching them as nicely :)