Best if by sea

Prince Edward Island is covered in rockets and lupins this month. The beautiful blooms appeared just as the dandelion blossoms made way for puffs of seeds. As my husband and I cycle or walk along the trails, we stop to take in the colourful scenes, fleeting moments in a natural flower show which are too beautiful to ignore.

Dame’s Rocket pops up along the Confederation Trail. Bunches of purple, pink and white blooms can be waist high. 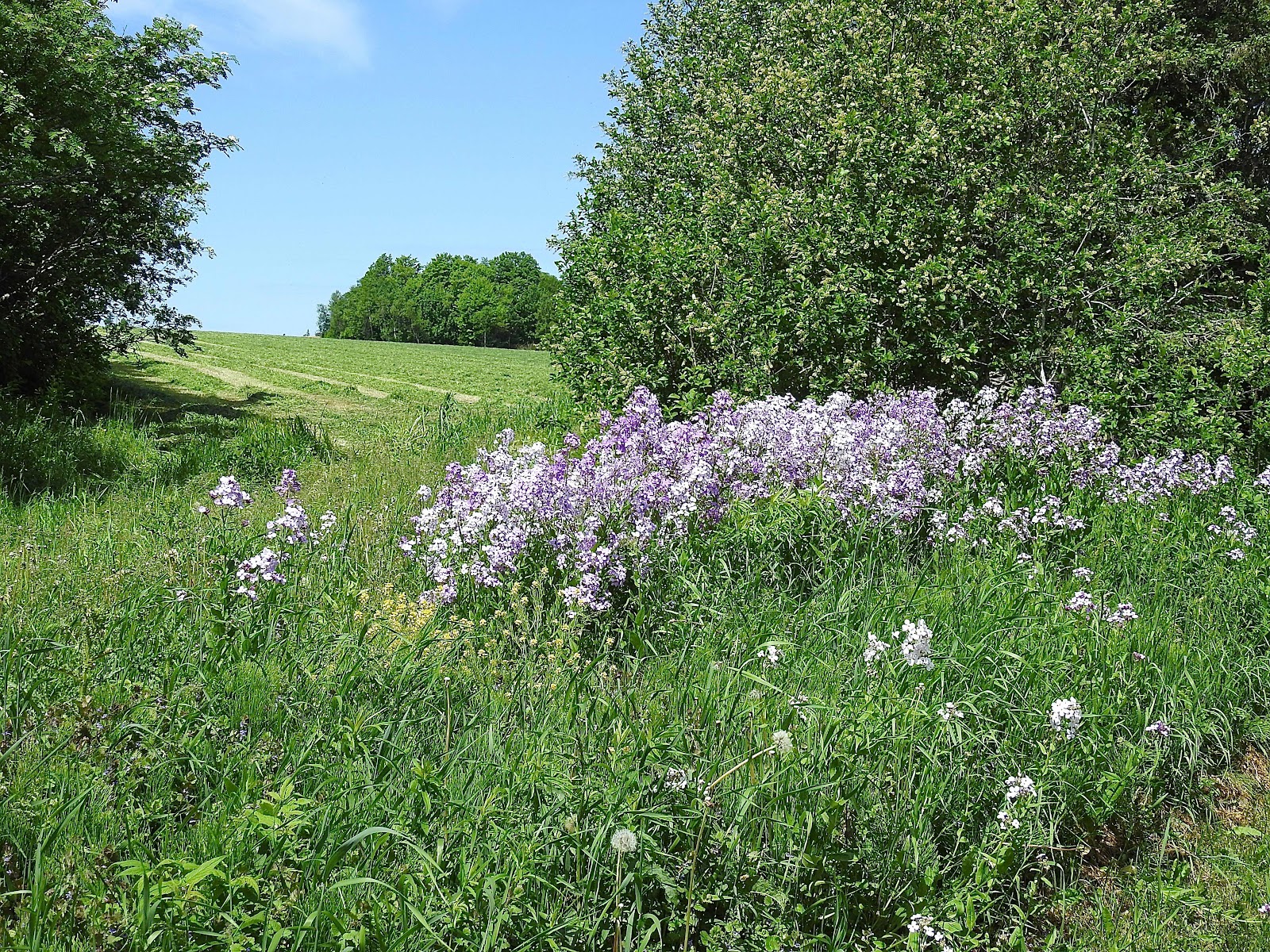 Along the boardwalk, it grows between the walkway and the sea. On closer look, the flowers have four petals and blooms in a cluster. 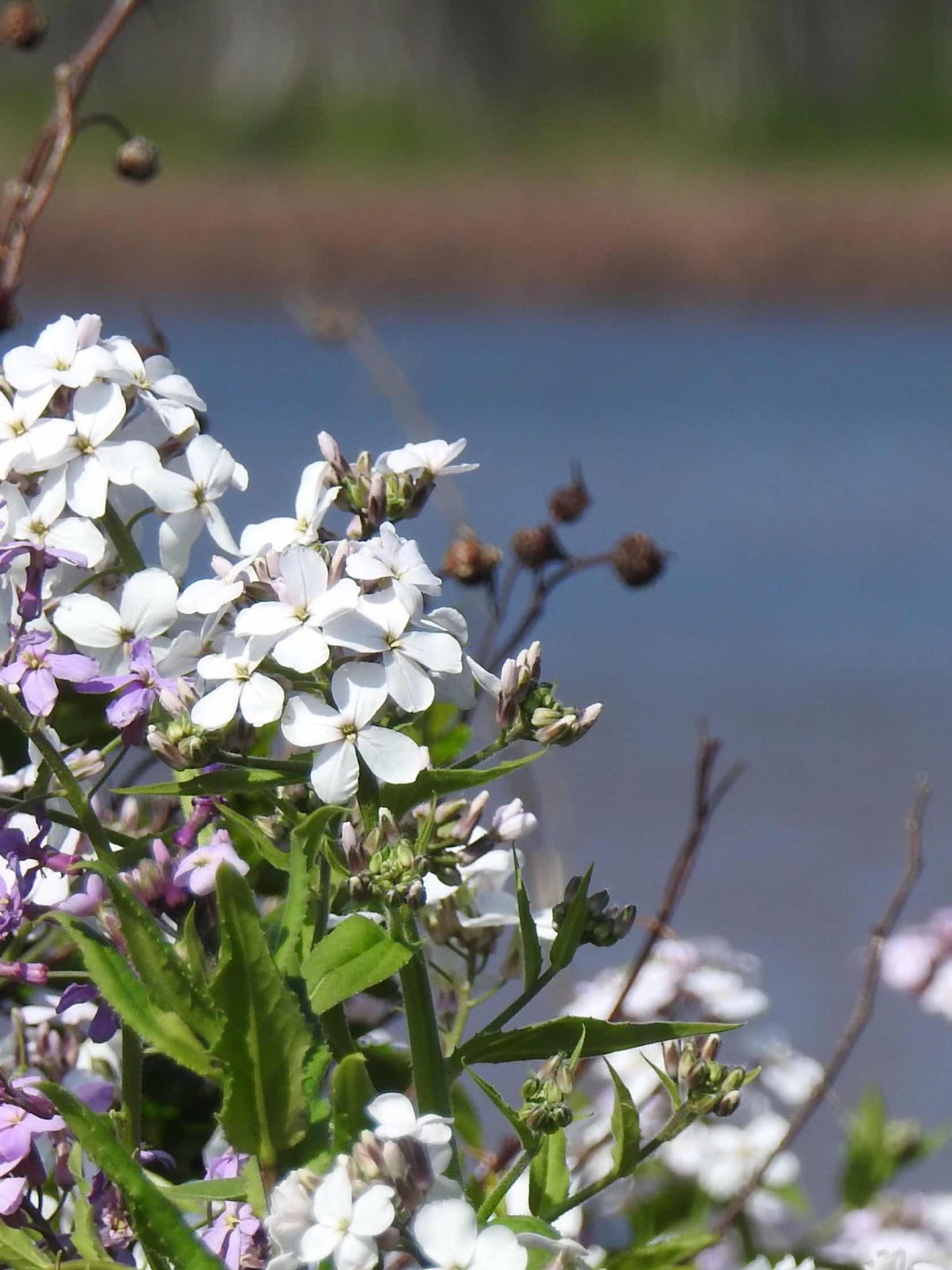 In an industrial area of the city, Dame’s Rocket lines the metal fence which closes off the area from the Confederation Trail. It is such a softening element to the industrial look. 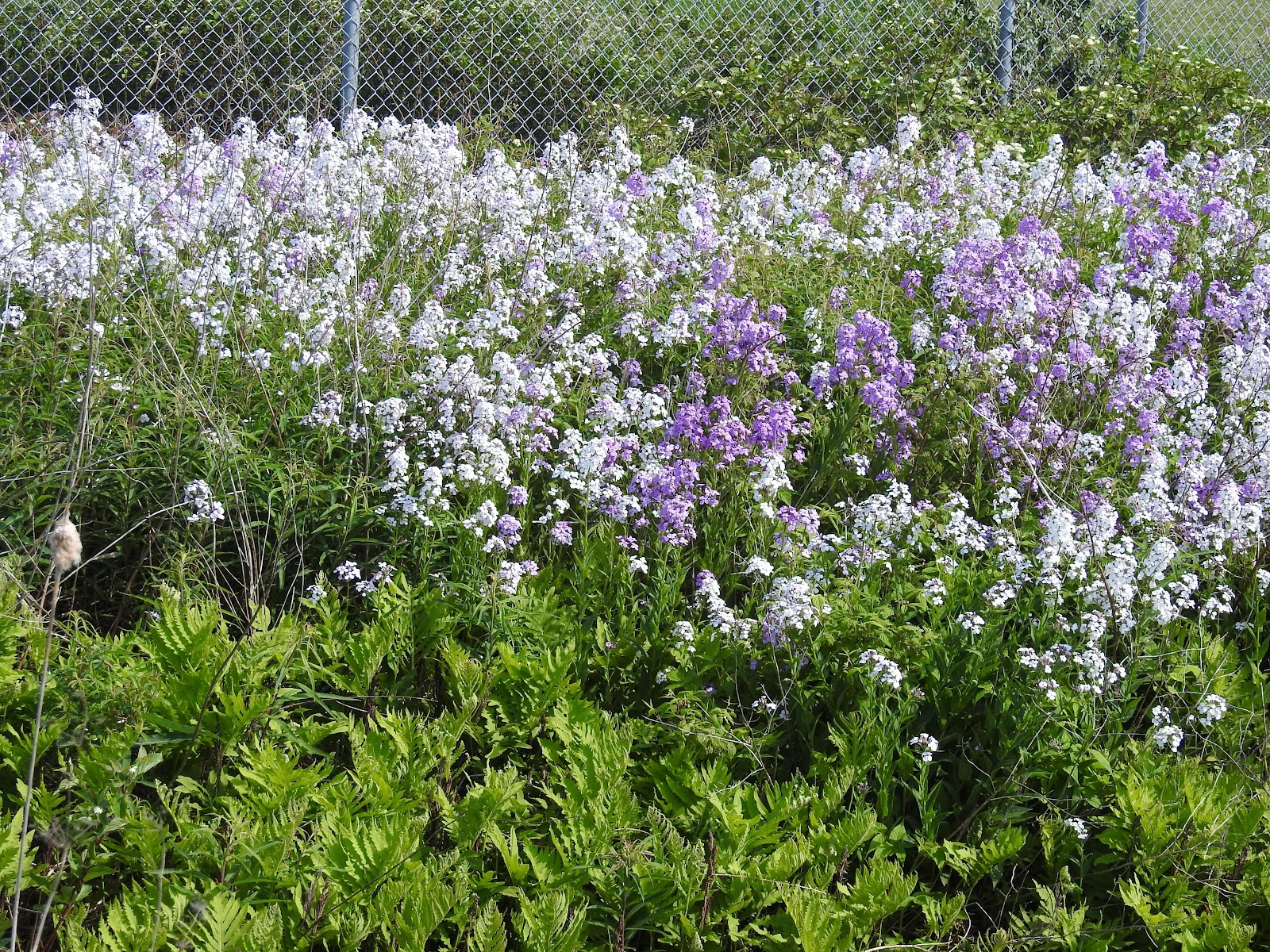 My favourite photos of rockets are those with the sea as a backdrop. 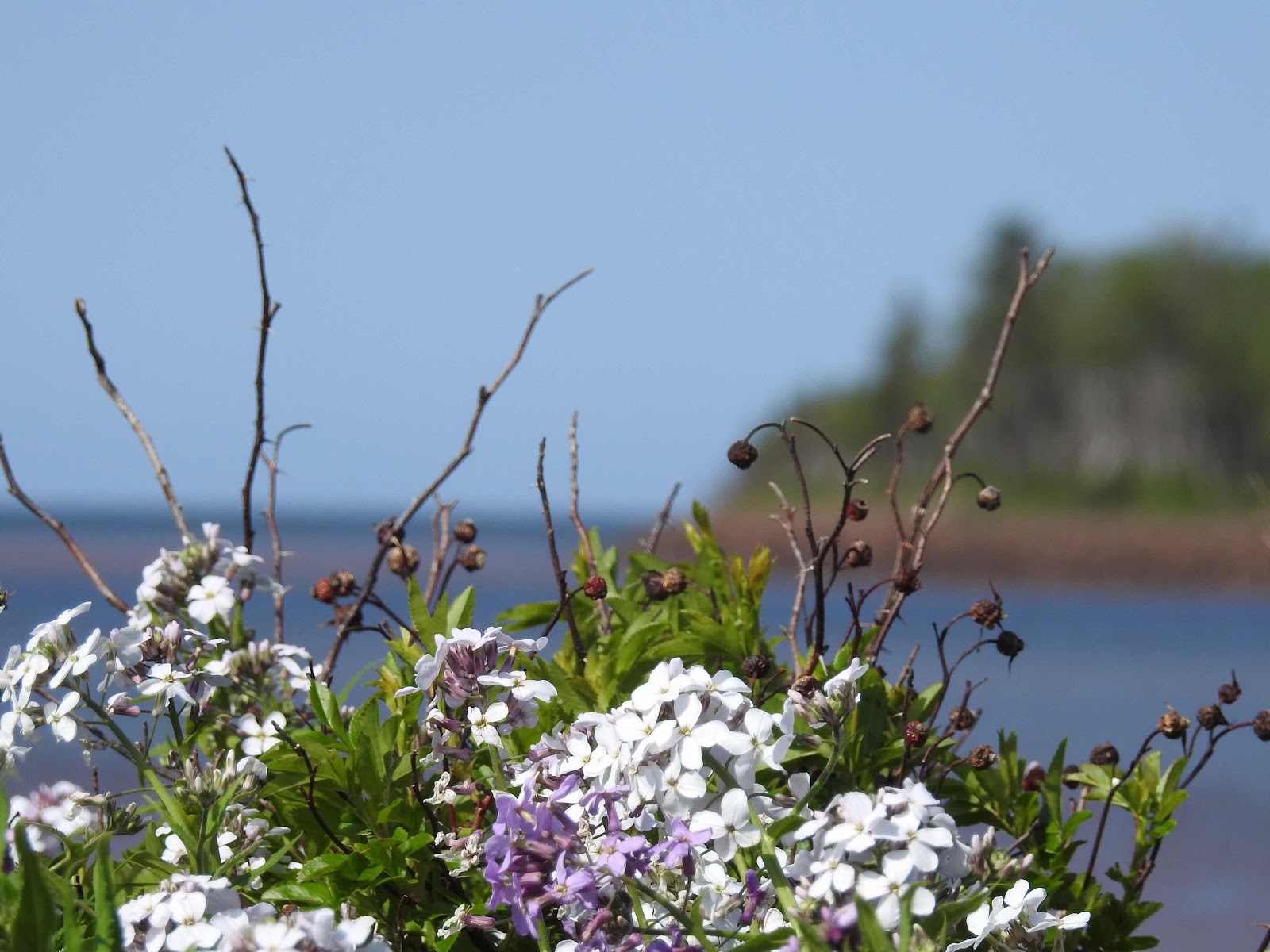 It was the same for the blooming trees. There is a common theme here.

Along the Confederation Trail, lupins or lupines as some refer to them, are abundant in some areas. They spread quickly, so we haven’t found single flowers but huge patches. One such patch, this past weekend within the city limits, caught my focus. 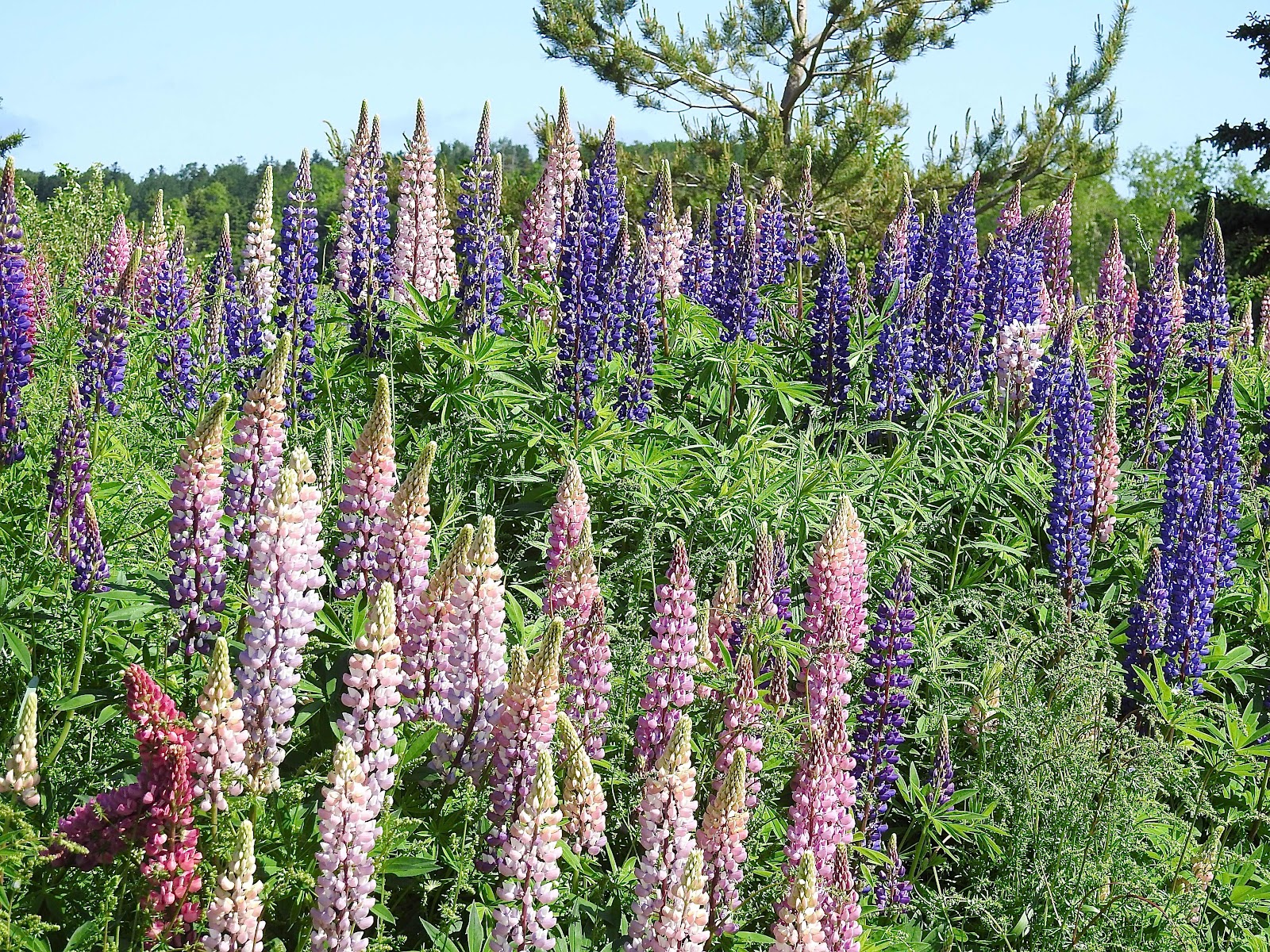 Lupins have a variety of colours and shades, including white. 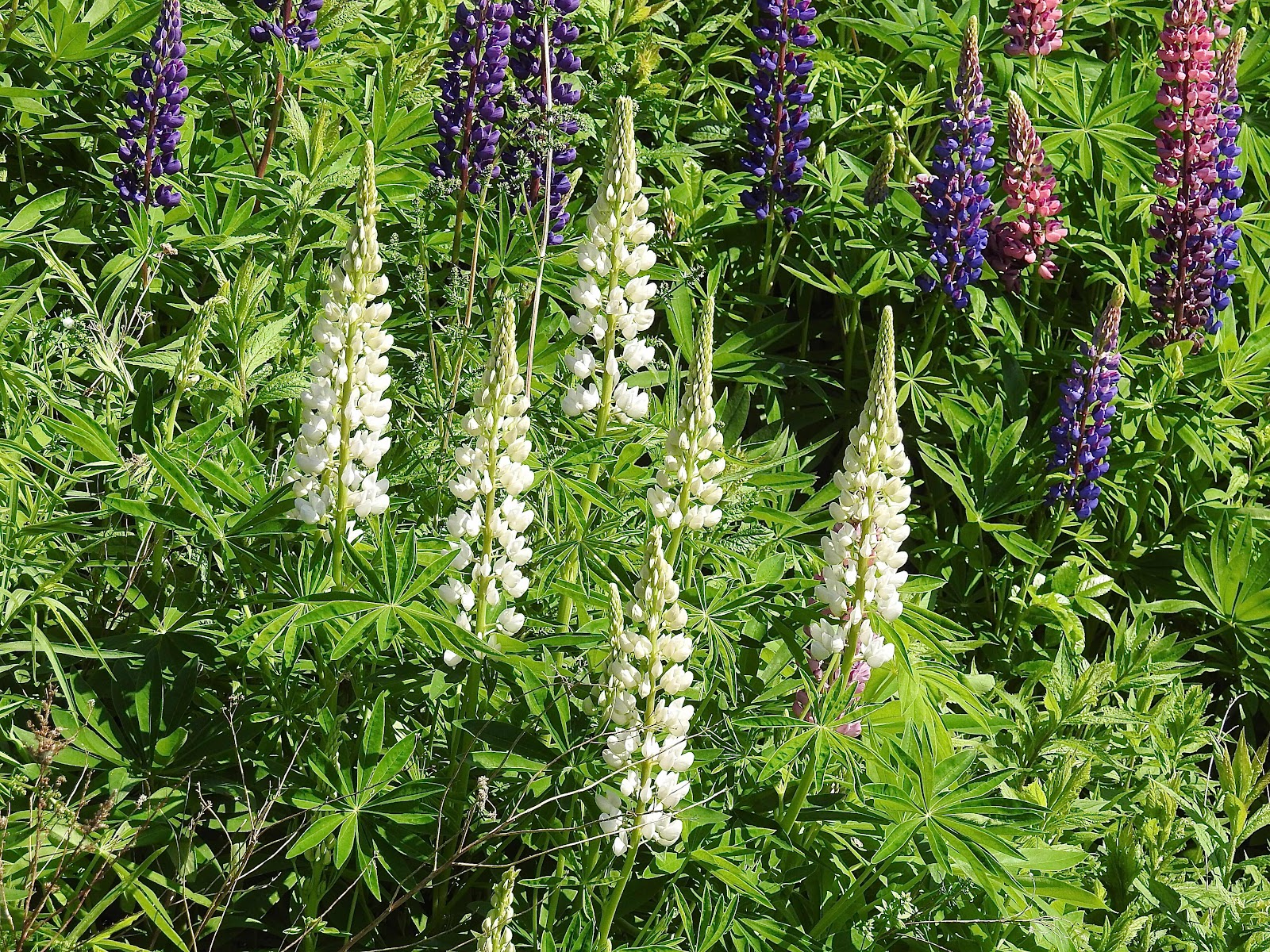 The pure purples, pinks, rose and blue colours are pretty as they are but I am always drawn to the dabs of white on various colours, dabs of rose on pink or purple on pink. 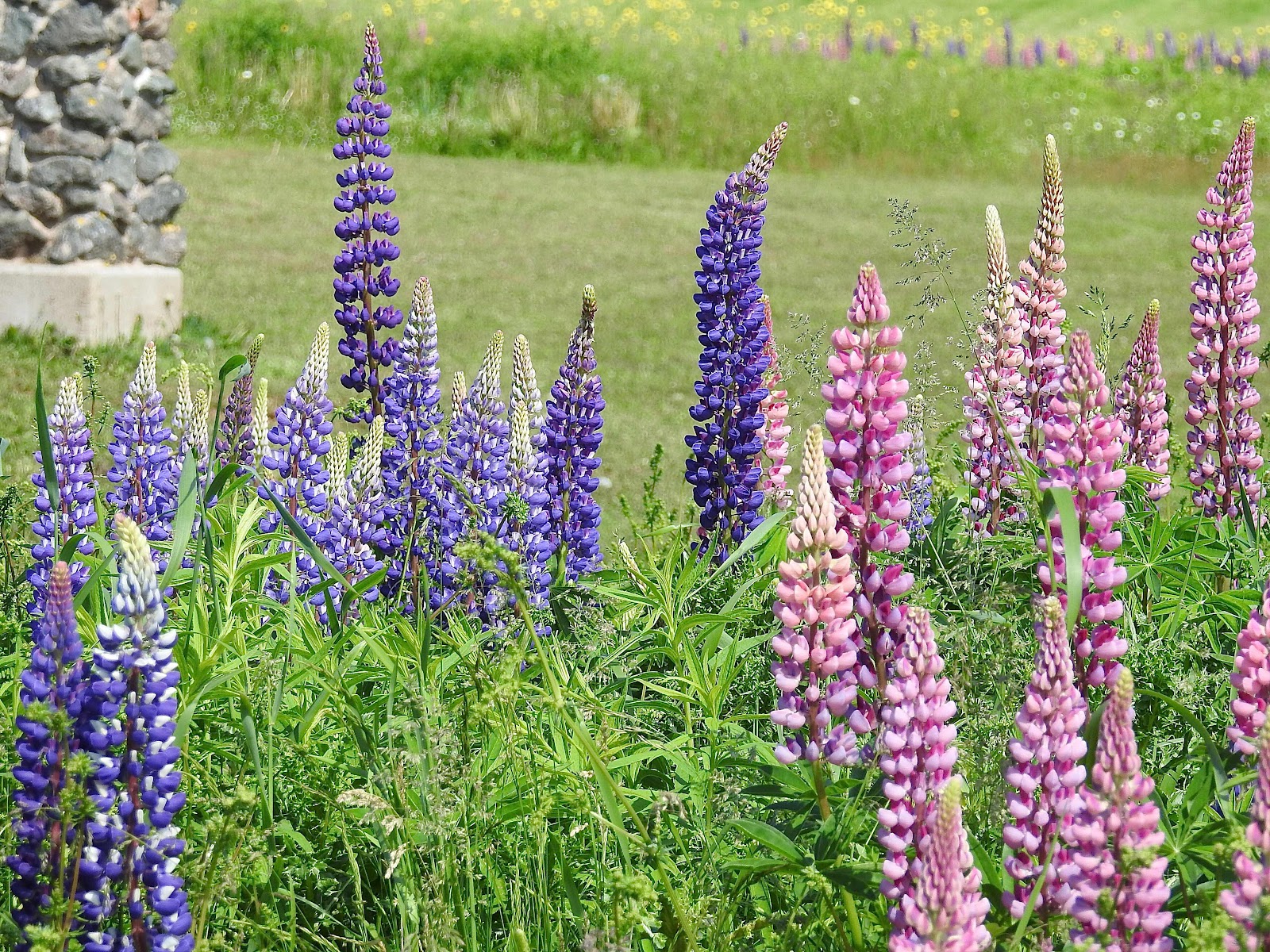 In this lupin patch, yellow day lilies found a footing. They add an interesting puzzle to the scene. How did the day lilies happen to be there? 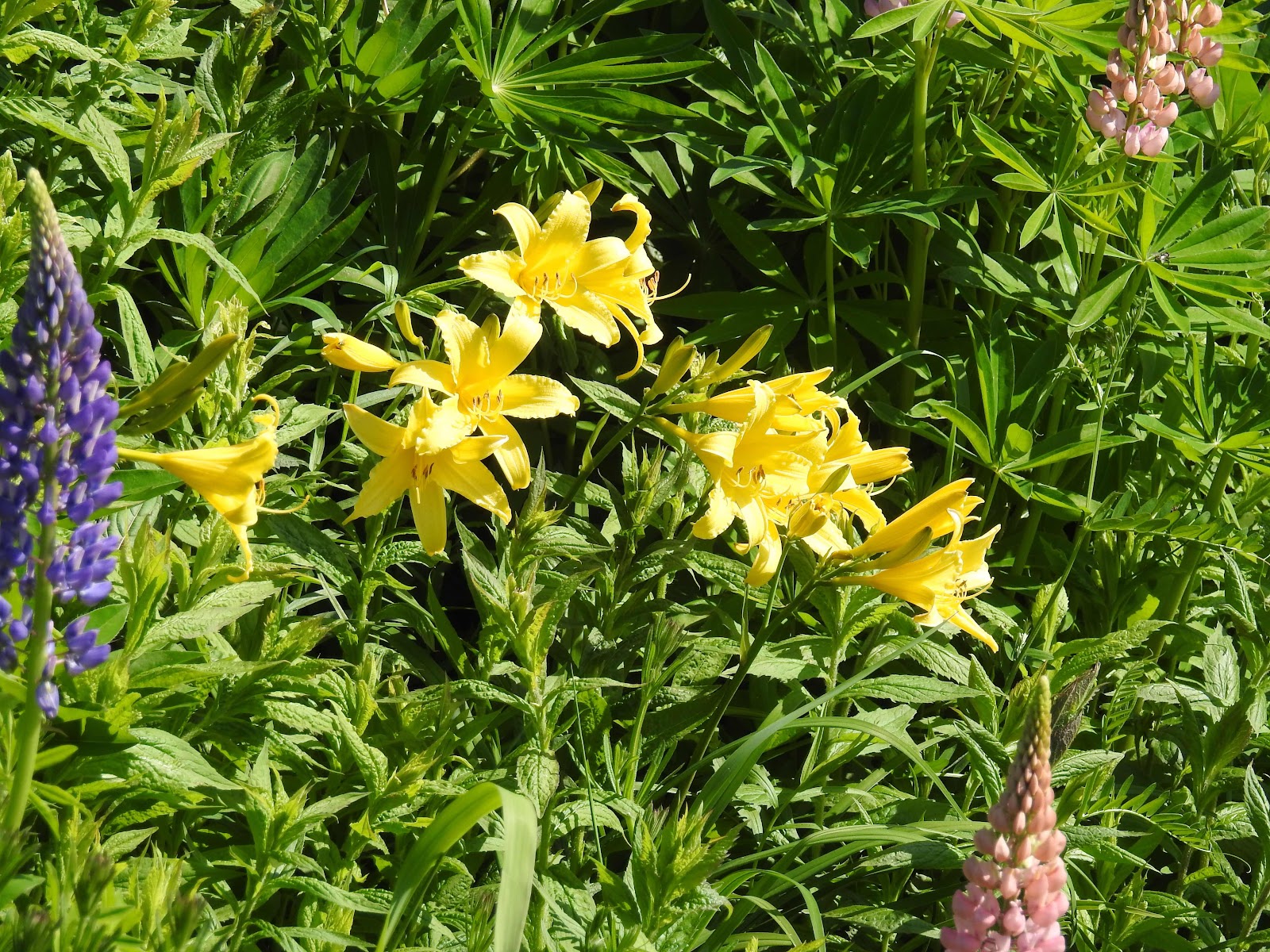 Lupin season doesn’t last long but the quest is on for a seaside setting which includes them.

My mother's garden grew a good stand of lupins most years, self-seeding themselves. They often "escape" from gardens and grow in the wild here but, as far as I know, never get out of hand. They must make the Trail a very attractive place at this time of year.

Absolutely beautiful. They don’t flourish in this climate to that extent.

Those lupins are just beautiful! I see them often in the High Country during summer excursions. Your PEI version is so lovely! Thank you for sharing.

So pretty, bright and colourful!

Not familiar with the name Rocket. They are beautiful...

As are the other flowers. -happy sigh-

I dearly love, how they take over. And how they are allowed to do so.

Oh my goodness...so gorgeous.
All those spring time flowers are long gone from our area...
How refreshing to see them in all their glory...
Us??
We are in drought time and everything is dry and going to brown and not very lovely.
Scary because it means a very early wild fire season.
Thanks for sharing your walks and rides with us.
Beautiful.
Sue

These are impressive - every single shot is so gorgeous!

Hi Marie, Your photos of flowers, trees, and other plants are excellent and your descriptions are informative. You could put together a horticultural guidebook! I find it fascinating that several flowers you saw are along my walk here on the waterfront. Especially the lupines! John

Oh wow.
What an absolute delight for the senses. Lupines are definitely a garden only plant here (as are day lilies) and I would love to see them dancing on the hillsides.
The frothy rocket is new to me - and also a delight.

Very pretty and colourful, they add their beauty to the landscape.

Oh wow! I had to think of my husband, he loved lupins and we used to have a big patch of them, all started from a few seeds given to him by a friend

Wow such beautiful photos. They really are so colourful. Hope all is well, Diane.

Lupins are so beautiful. Here we grow them in gardens and they never spread so much.

We well remember the Lupins on the island! Beautiful. We have rockets here, but few wild Lupins.

You are fortunate to have many wild flowers that make the area attractive.

Lupin is such a pretty flower.

all are wonderful.... great captured.

Other than the views of the ocean those pictures could have been taken right here in Ontario, Marie.

I have such treasured memories of the lupins on our summer visit 2019. Hennebury Road, Rice Point is where you will find them by the sea and perhaps the seals will be at play as well.

I didn’t know the name for Dame Rockets so thank you. We have lots of them in Pennsylvania. And your photos are so pretty. Our lupines here in Maine on Little Deer Isle are waning now. A bit sad for me since they are a favorite of mine. ❤️

What a delight to see these pretty blooms! We don't have them growing over here in our tropical corner of the world. Love the fabulous photos.

Dame's Rocket is a flower that I don't ever remember seeing or hearing of. I wonder if we even have it here in North Carolina????? (U.S.)

So they're wild lupins? That's amazing. You don't see those here. (Incidentally have you watched the Netflix series, Lupin (Or is it on Amazon?) It's very good.

I am in love with the flowers that bloom near the sea. Those are amazing. Thank you so much for sharing.

Beautiful wildflowers. I love all the lovely colors. I wish we had the lupines growing around here, we do have the Dame's Rockets. Pretty flowers and photos. Have a happy day and great weekend!

I love the Lupins. I don't know why but I thought they were only blue. Good to know.