Recently, as we cycled a section of the Confederation Trail in eastern Prince Edward Island, 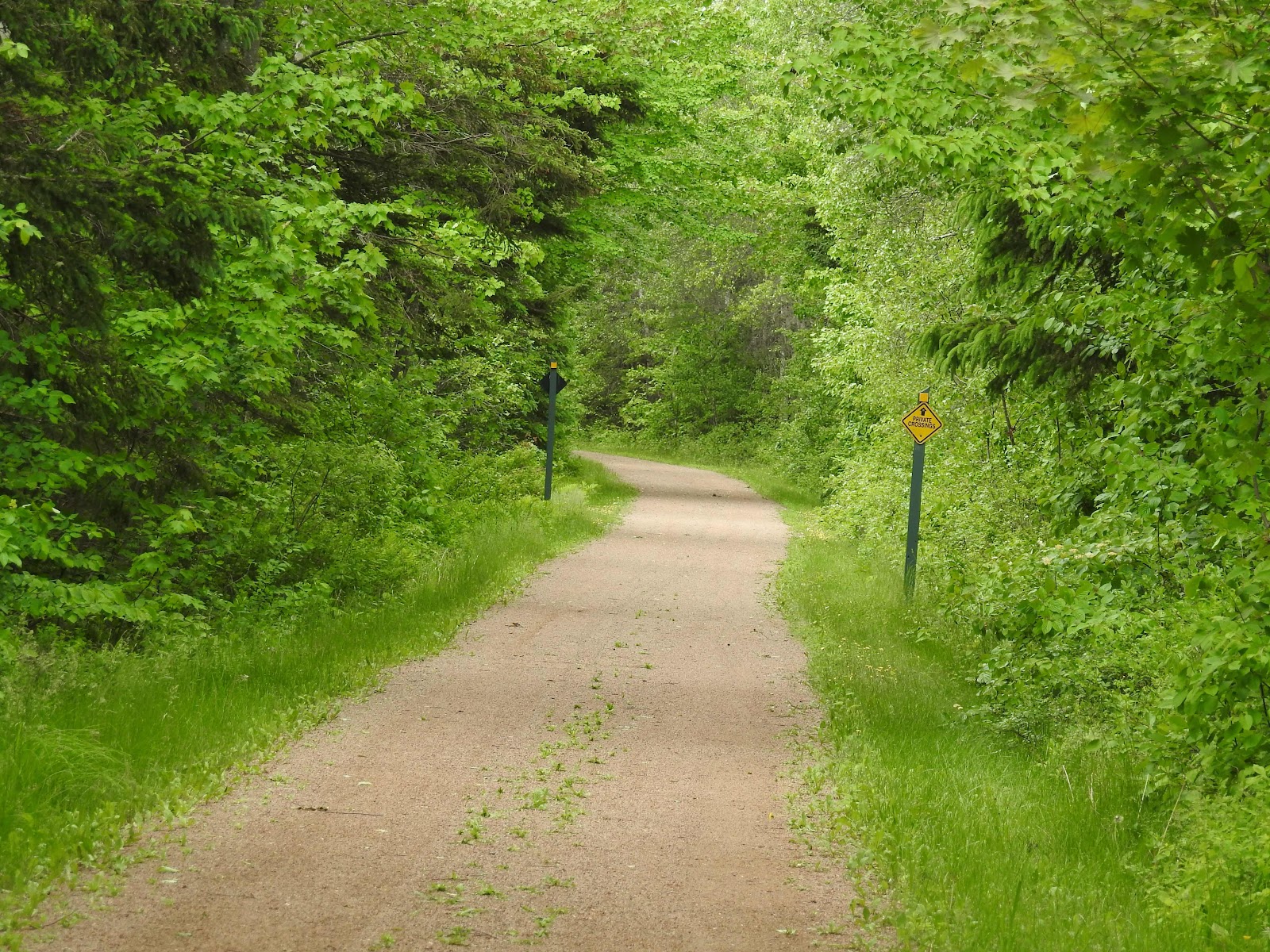 we learned from a friendly trail worker about a Ducks Unlimited protected area near Morell, where we were headed. The wetland had an Osprey nest which we were glad to hear about.

Sure enough, we found the area mentioned and the nest was obvious at the back of the pond. 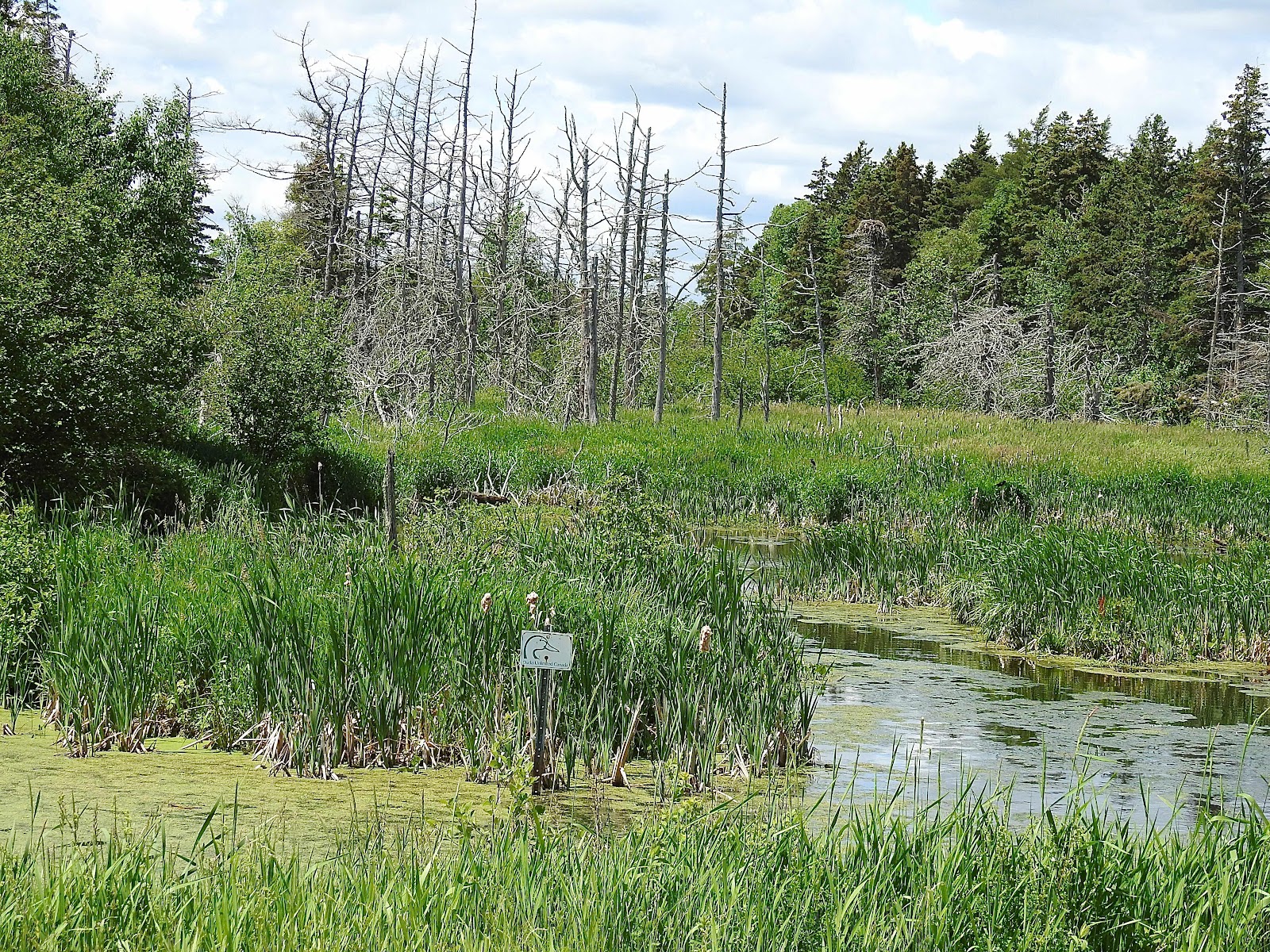 We didn’t see any Osprey however. It is interesting, though sad, to see how the birds recycle plastic when building their nests. 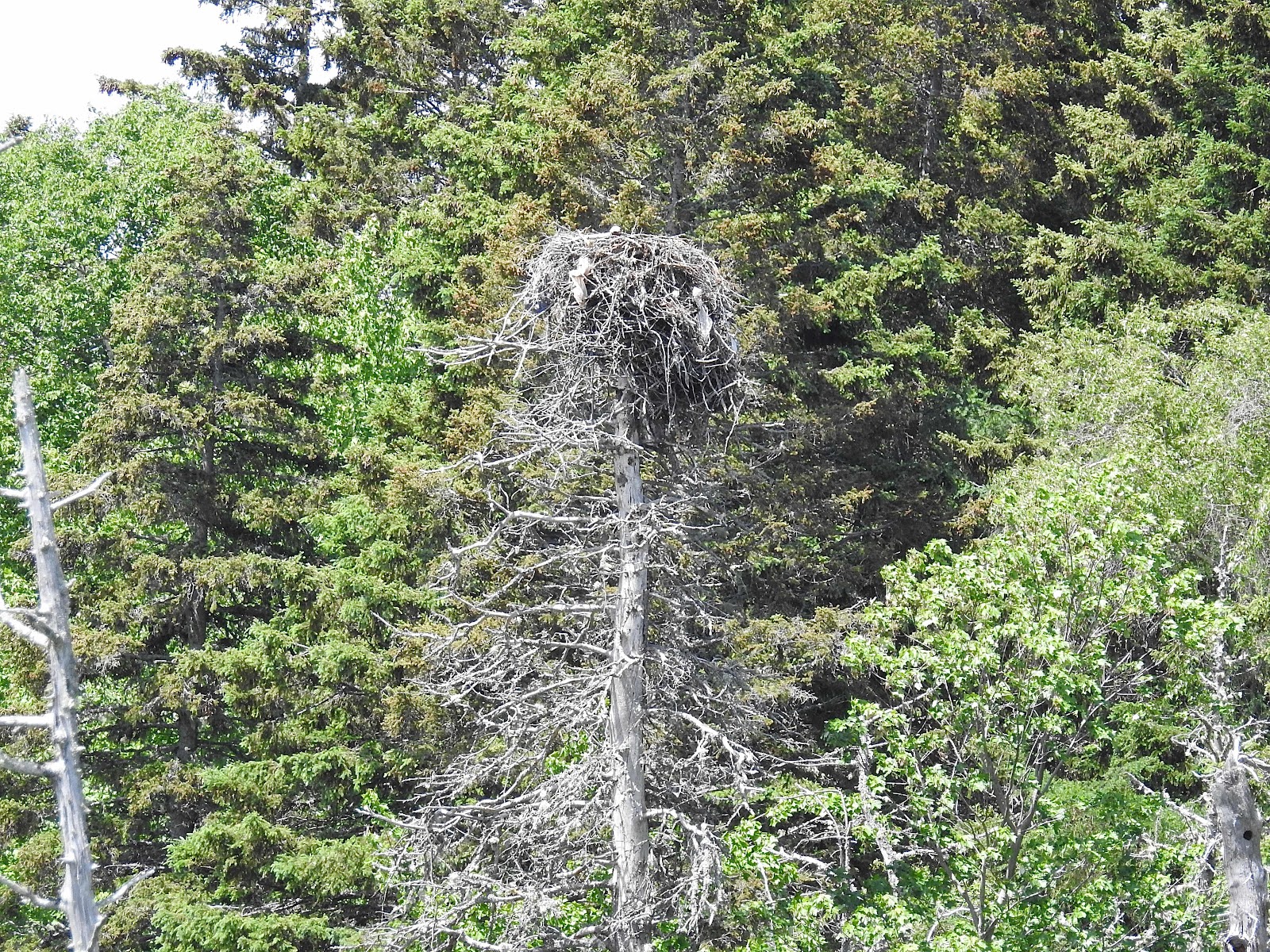 Also in the pond were several male Wood Ducks. 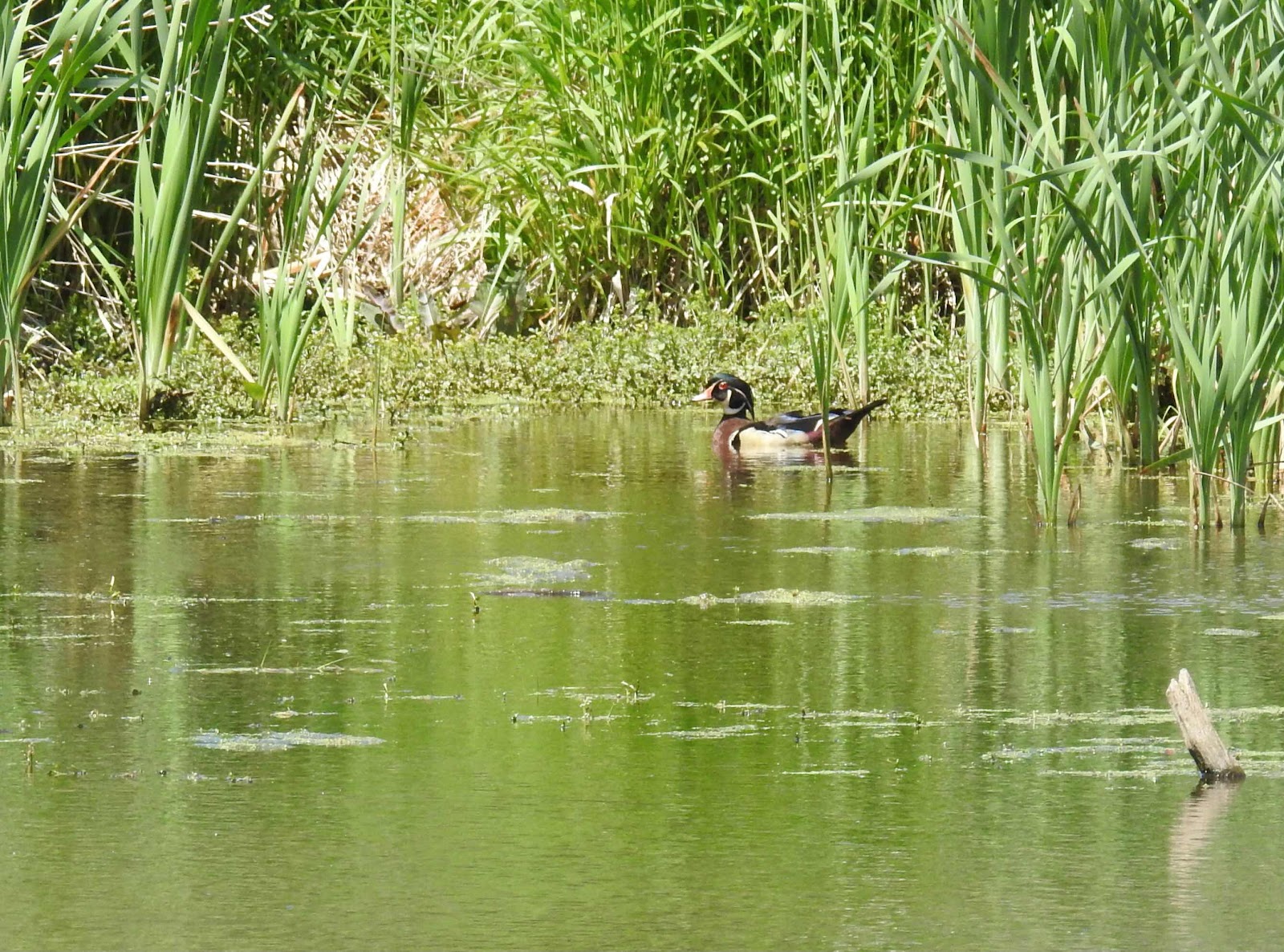 I was thrilled to see them though they tested the limits of my camera. I had only ever seen one such duck previously but had not been able to photograph it.

In addition, a pair of Canada Geese with five goslings nested on an island in the pond. The goslings were the biggest I had ever seen. The gaggle was initially in the water, 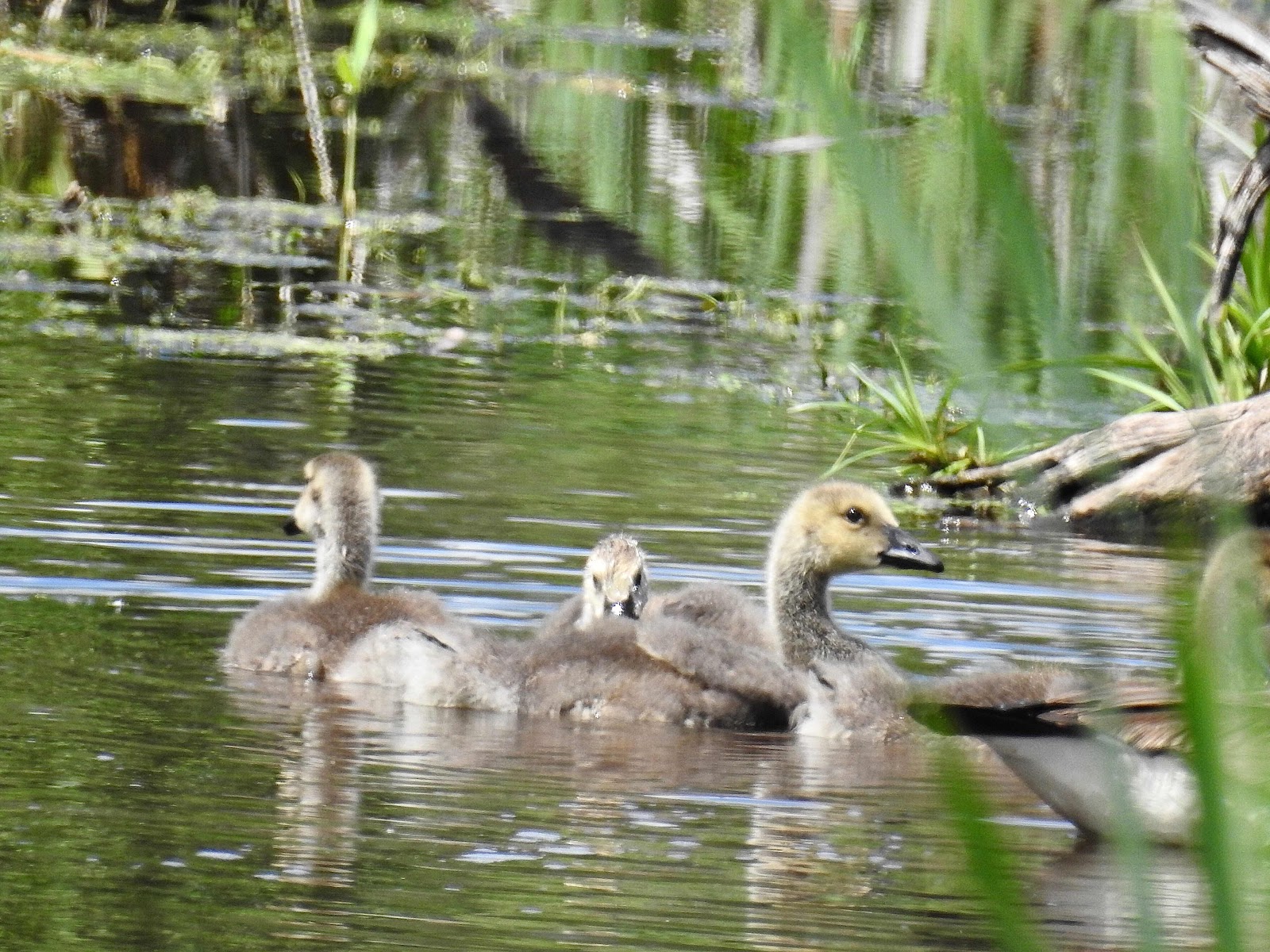 then moved to the island where the adults gave a display of wing spread. Three of the goslings watched intently. 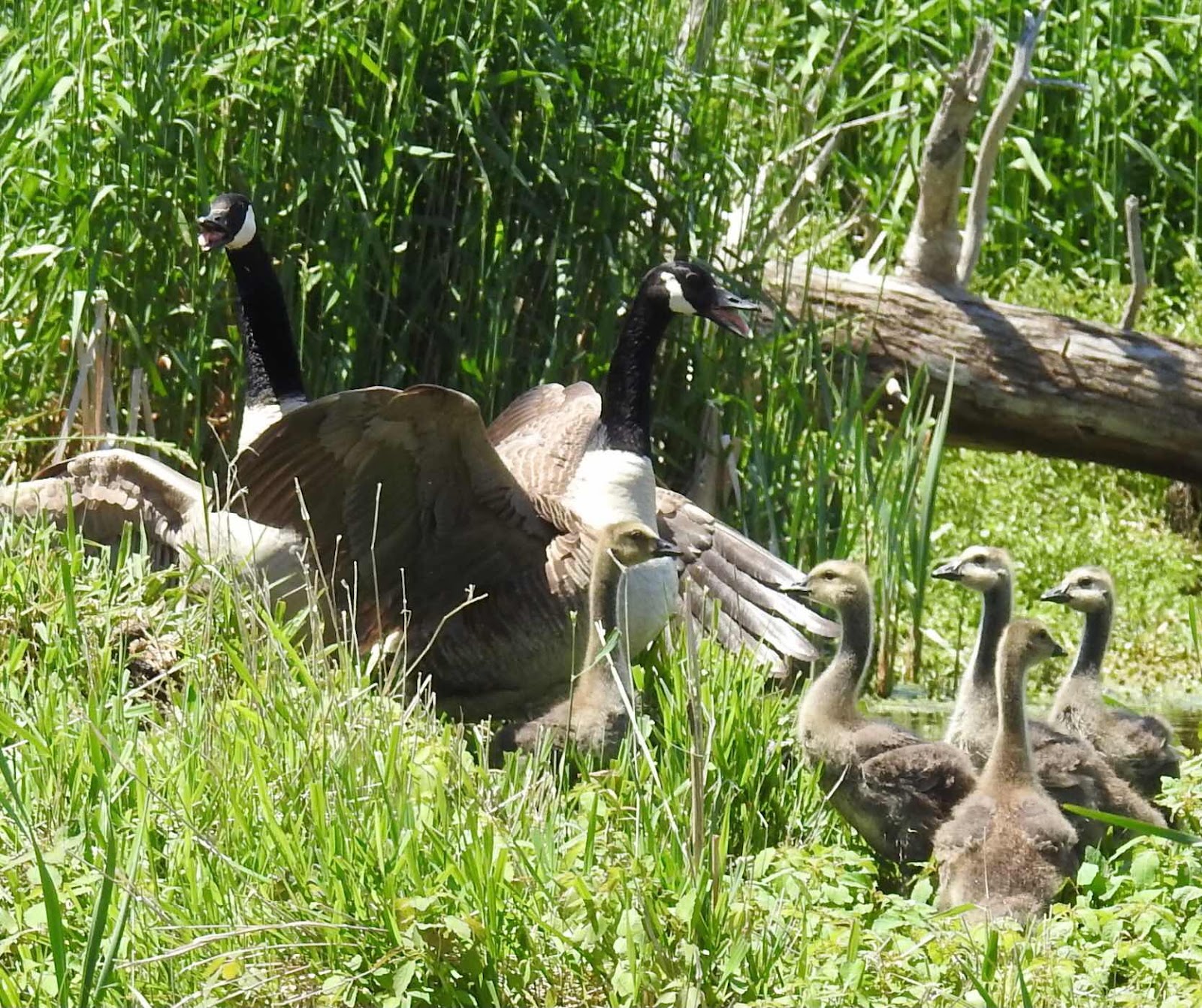 Meanwhile, three Tree Swallows where flitting above the water, moving too swiftly to be photographed. Among the bulrushes, Red-Winged Blackbirds chattered loudly. 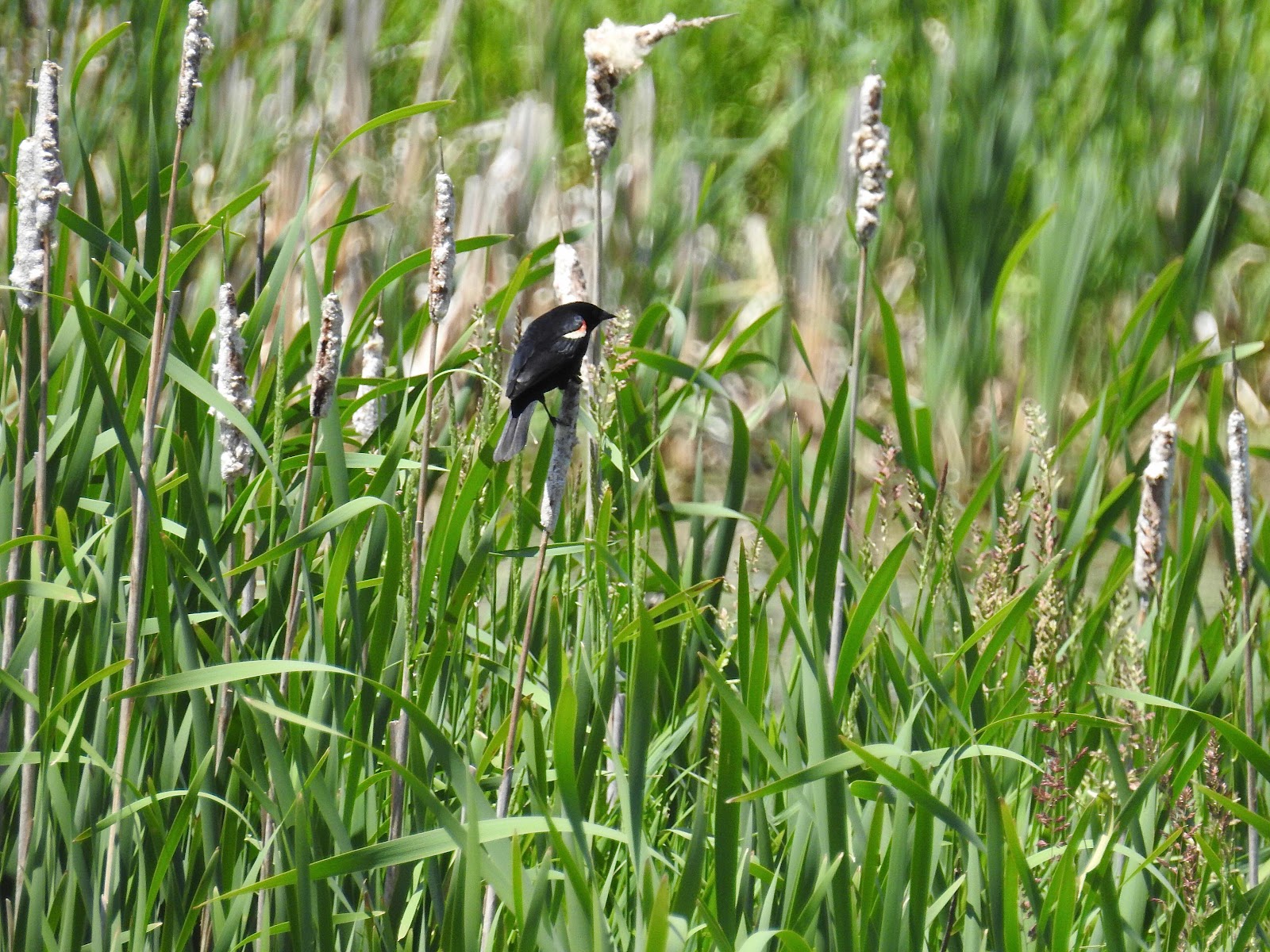 Before we left, two crows appeared to be bothering ducks at the back of the pond. There was a lot of quacking and the two crows looked like they were attacking something in the grasses. Crows can stir things up when they get started.

A few words from a friendly person can make an already great day even better.

Hi Marie, What a neat post. Very cool to find the Osprey nest. Nice capture on the Wood Duck. Best of all, in my opinion, the shot of the Canada Geese and goslings! What a neat picture. Another award winner. Lastly, I know you were referring to the friendly trail worker when you said, "A few words from a friendly person can make an already great day even better." I'm thinking that could be a great stand alone closing thought. Maybe I will use it on John's Island, if I do, I'll be sure to credit it to you. Have a great day! John

A Few Simple Words From The Heart Really Is An Attitude Changer - May I Always Remember To Speak With Happiness - Thank You For The Reminder - Cycling, Cures That Cloudy Mind - Big Hugs

What a beautiful place and fantastic captures as always!

I love your shots of the Canadian geese Marie, the goslings are so adorable, love the shot of the goslings watching their parents preen :) Crows certainly can stir things up, I'm not particularly fond of them.

wood duck looks so beautiful.... I never seen in nature.

Hello Marie,
it is cool to find the Osprey nest. Great sighting of the Wood duck, the goslings are so cute.
You saw a nice variety of birds. A few nice words can brighten someone's day. Take care, enjoy your day!

Love the beauty where you hike and ride. All of God's creation is bountiful, especially all those little critters.
Wish we were doing some of that now ourselves...a few more months and Dave will be completely back to full mobility..yay!!
Sue

What a lovely place! I love the goslings watching the parent, and the entire excursion looks like it was a success. Thank you for sharing it with me. :-)

Yet another wonderful outing. Thank you so much for taking us along.

Beautiful photos. There are times when I see you banner photo, and feel like I'm on vacation.
The osprey nest on Cornell Bird cams, the two young ones have fledged already. I'm not sure if osprey have more than on family a season or not.

Another wonderful ride and lovely sightings.

Bird life is so fascinating.

Oyspry how cool.
Coffee is on and stay safe

In your first image the trail beckons and then we get to enjoy its beauty and its birds. Wonderful.

Wood Ducks are so attractive.

I hope there are osprey your next time by.

This looks like a very active wet land. Some people can let you in on good info.

It's really quite exciting to come across an Osprey nest atop a tree. It is quite a few years since I saw one other than on a tower expressly constructed for the purpose, or on top of a transmission tower which can be fatal to the bird at times, and potentially a nuisance for the power company. I will look forward to further reports if you are able to confirm breeding.

first is my most favorite as i love looking at lush trail without blinking my eyes for so long :)

the pose of goslings in wing spread image is really amazing
more blessings!

Seeing your lovely photos improves my day as well :)

Lovely shots of the Canadian geese Marie. The goslings are so cute!

Too bad you didn't get to see the ospry! I love seeing all the goslings with their parents and following them around. Great photos and interesting post.