The beach at Thunder Cove is one of the most beautiful beaches on Prince Edward Island. The gorgeous red sand beach, tinted by iron oxide, is pristine and appears to stretch into forever. 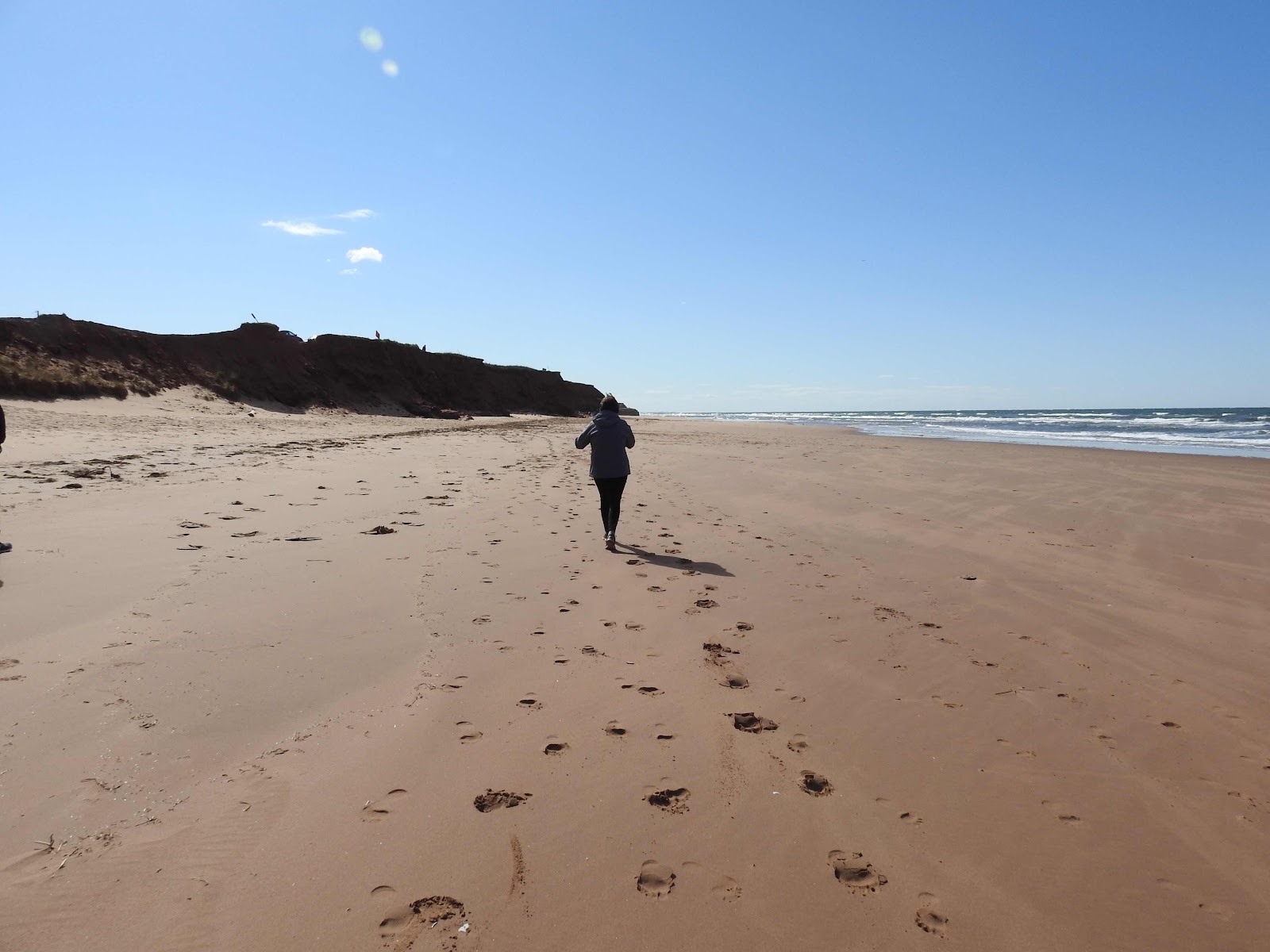 Sandstone cliffs along the length of beach are easily eroded and this process has always been a source of interest for residents and visitors alike. 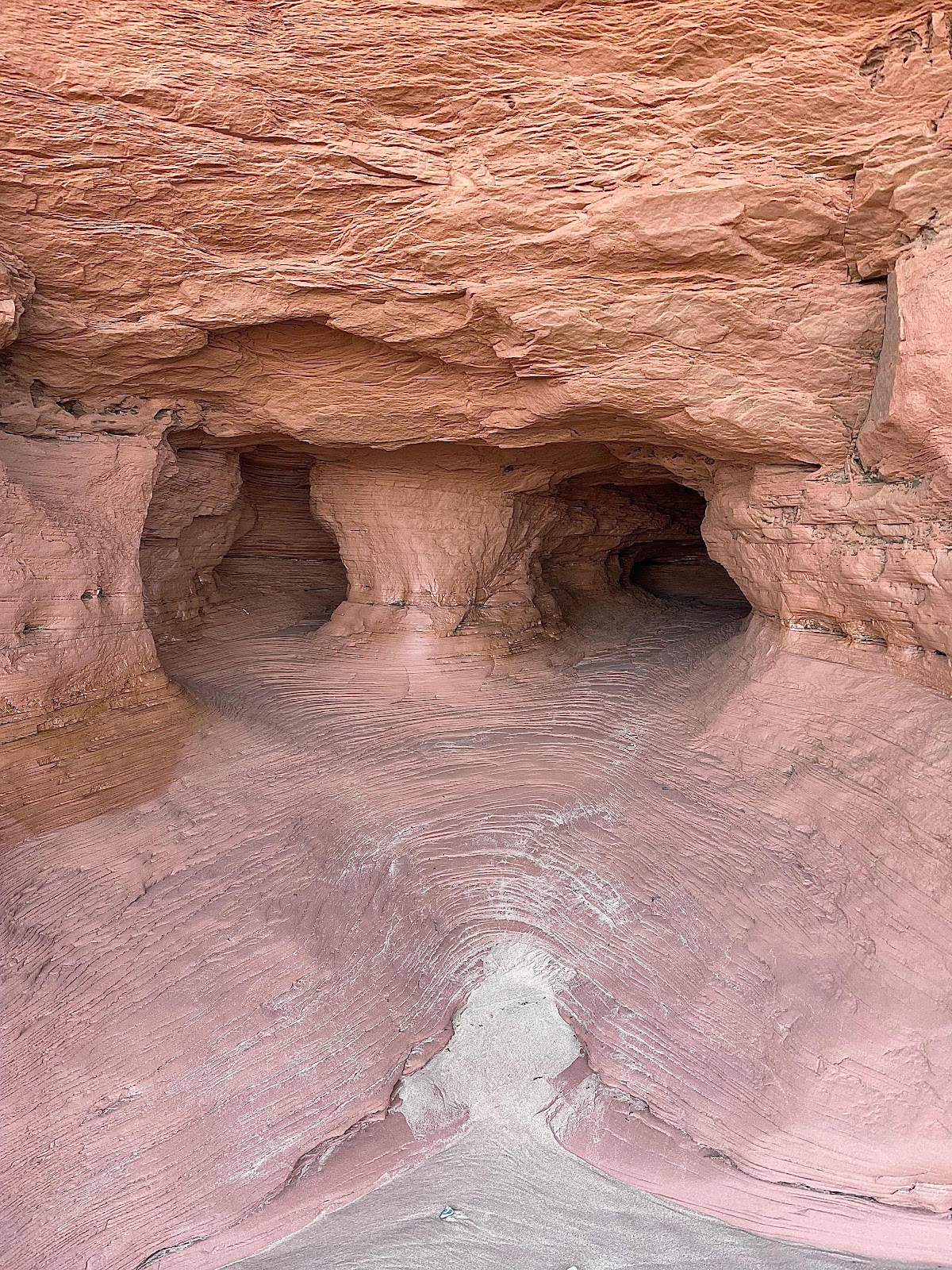 The sea’s sustained assault on the sandstone creates interesting shapes, holes and crevasses which are tempting for people to explore. This is not a safe practice however as the cliffs above collapse when the supporting sandstone is undermined.

Then there are the sea stacks around the island, the most famous of which is the Tea Cup at Thunder Cove. Created by erosion, they too draw people, as this one drew us on a recent visit to the Cove. 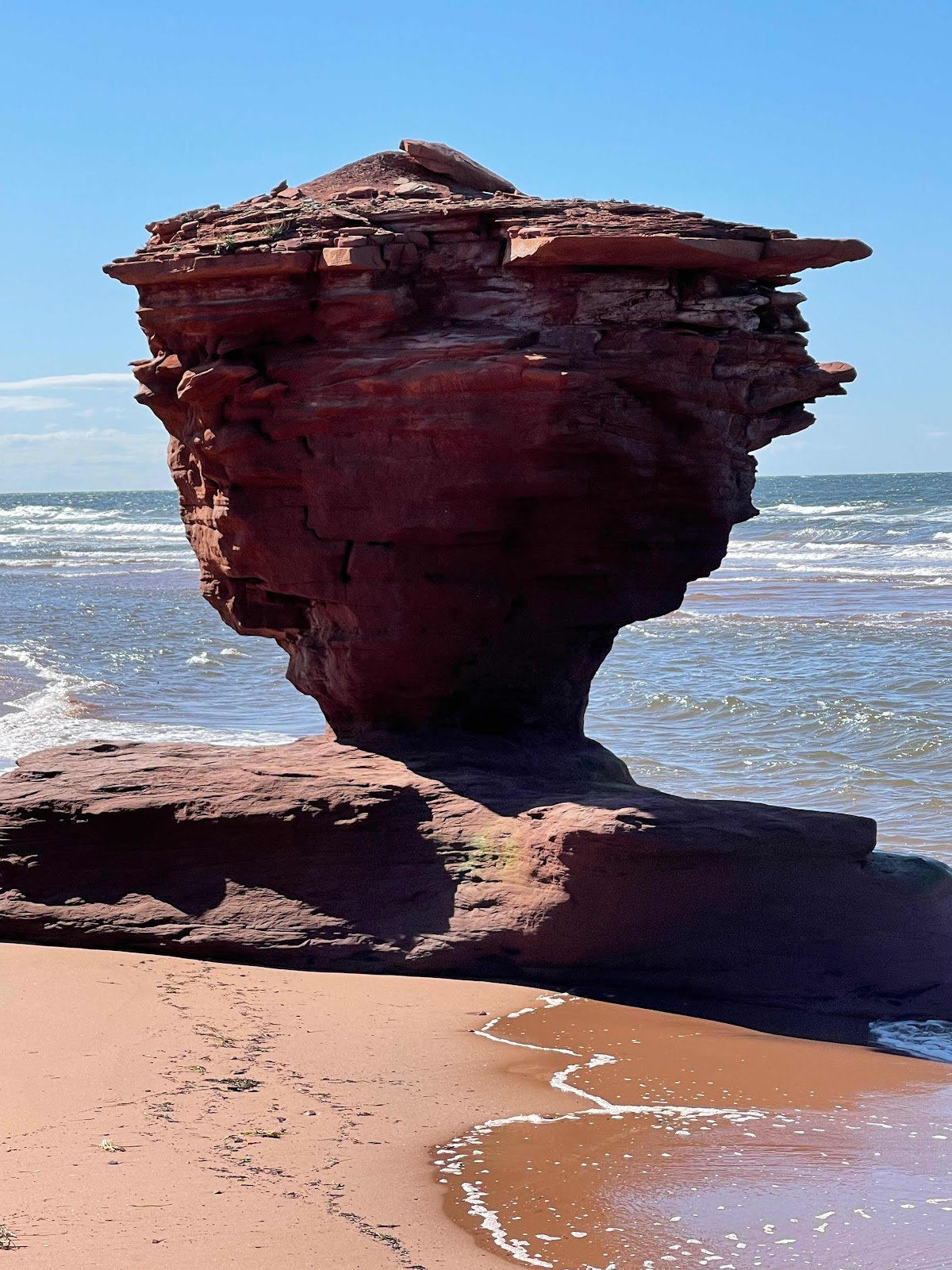 We hadn’t seen the Tea Cup in several years and it was interesting to compare it to previous photos. The Tea Cup is not much different although the stem of the cup has narrowed. Every spring people expect to find the cup collapsed but it has defied the elements thus far. Its time is running out.

Meanwhile, one of two other sea stacks nearby has changed more noticeably since it lost its connection to the cliff. 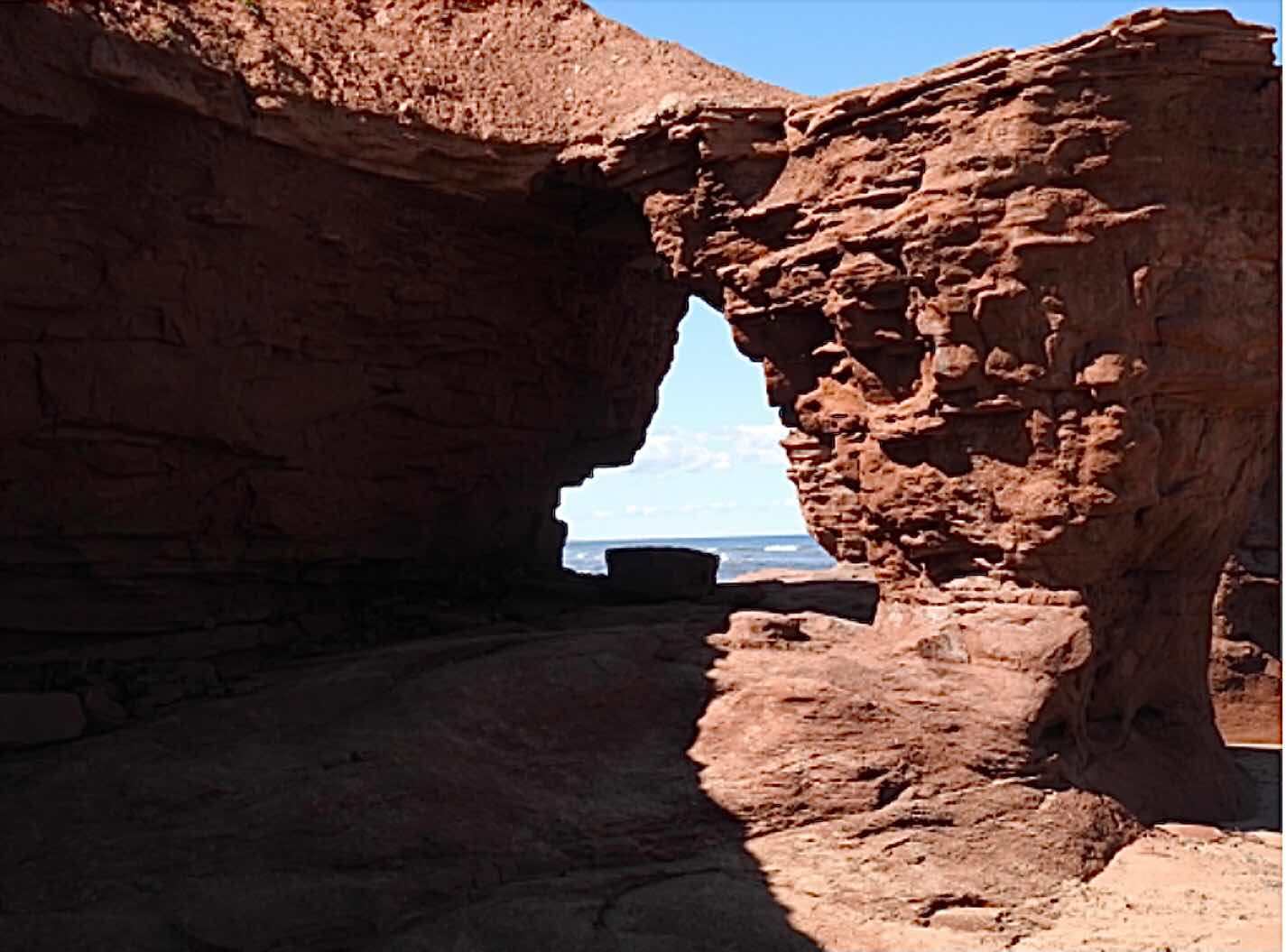 The soil and sandstone nearby illustrate the danger of getting too close to the cliffs. 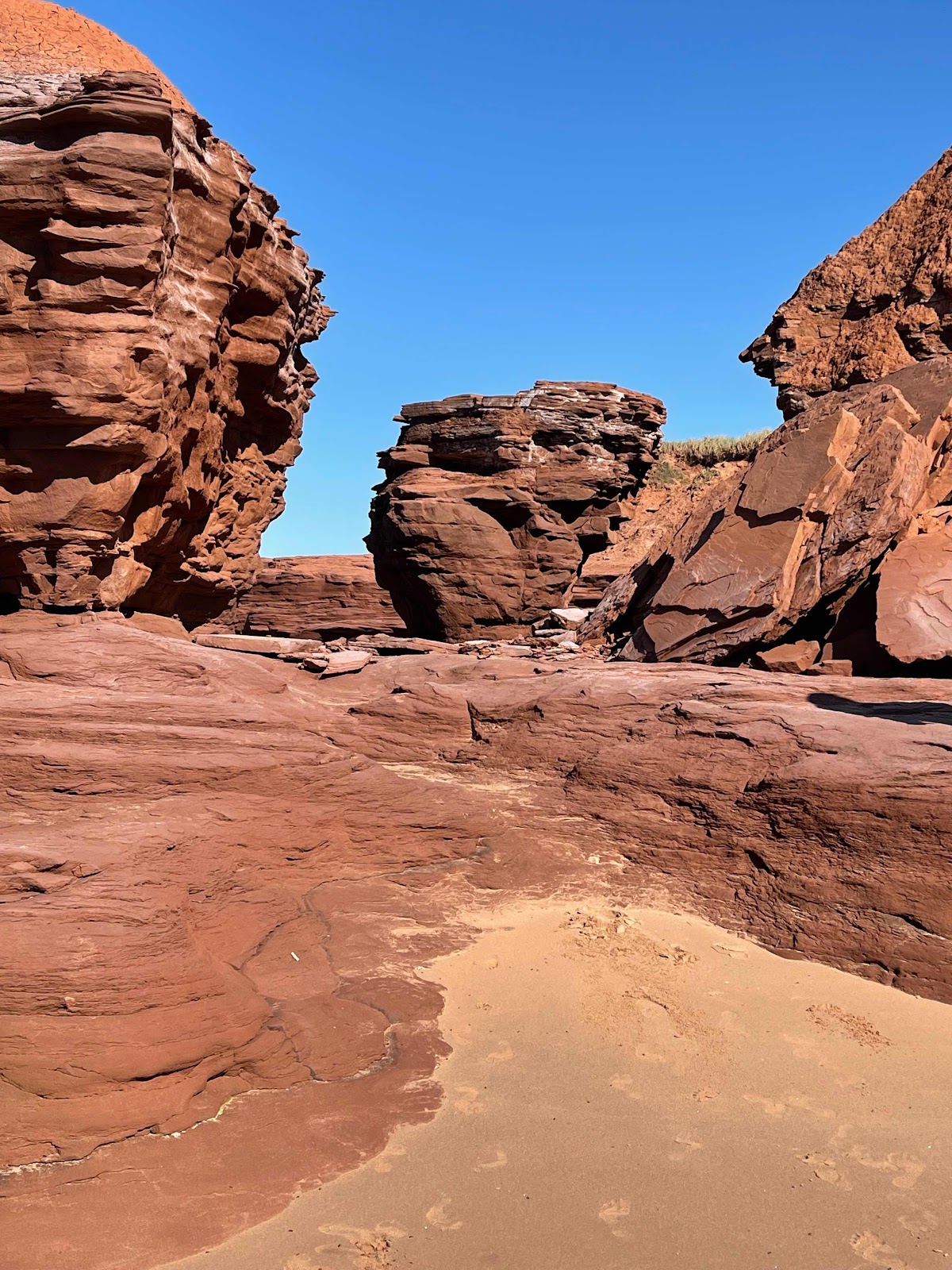 We enjoy the cliffs at a safe distance and the sea stacks as long as the exhibit lasts.

Hi Marie, Such an interesting post. Spent several minutes looking at the photos. That first one ... I could almost feel like I was there. Great shot. The teacup is a fascination. Your photos would make great illustrations in a textbook describing the effects of erosion.

A beautiful place to explore.

Warp speed erosion! Does the sand stain the way red clay does?

Sandstone is such a wonderful (if fragile in the long term) terrain! The closest thing we have here in Alberta is the hoodoos in the badlands.

You have to wonder how long these formations, and the shoreline itself in fact, can last, given the increased frequency and severity of storms, and the inexorable rise in ocean levels.

So beautiful! I would want to explore close up by can sure see why it's best to keep a safe distance. Nature is amazing!

Fascinating and so lovely...the sandstone makes wonderful photo ops.
I don't blame you for visiting them. Love the red beaches...
Enjoy your Wednesday.
Sue

That is quite a difference in the last two photos.

Oh, I want to come and visit!

Wow! I never think of PEI as having scenery like this.

What a stunning display. David's comment echoes my thoughts.

Such a lovely place! A teacup is beautiful. I would like to walk along this beach.

Stunning images of sandstones. And your first image looks so good, like it's on some other planet.

That is a beautiful beach and I love those rock formations. Thunder Cove sounds like a book or a movie! Love the name. If I ever win the BIG contest, I'm going to travel to all the beautiful beaches.

And I agree with John's Island. Your photos are spectacular.

I can see where people would want to explore under and on these forms. I does look like an accident waiting to happen. Beautiful to photograph.

Such a beautiful place to visit, the rock formations are amazing! I just love that teacup rock, and all the nocks and crannies in the rocks. So wonderful to visit and see the beauty there!

What a wonderful location! Thanks for the amazing photos.

Yes, lovely from a distance.

What a beautiful beach. The weathering away of the sea stacks and cliffs is sad, but nature takes its course. It makes you wonder how long that Teacup formation will stand.

It's sad when well-known landmarks finally succumb to the elements; though without erosion there'd be no beaches!

Beautiful beach, the views of the tea cup and the sea stacks are lovely.
Nature is grand! Take care, have a happy day!

Love the name Thunder Cove! These shots made me think of the Sculpture by the Sea exhibition we have here Marie, only with nature's sculptures instead of man made works. So fascinating to see the changes each year ✨

The colours here remind me of a wonderful trip I had in Colorado, where the soil and sculping of the rock are similar, but without water.
Beautiful shots. Thank you.

Lovely photos, what a great beach. It's so long since my toes have walked on a beach, I miss the sea so much! Long may the Tea Cup survive the storms of the ocean!

I can feel your joy!
These red sandstone outcrops are impressive and dramatic.

The cliffs should be seen at a distance no doubt... they are beautiful but a bit intimidating. .. :)

i found the first image really impressive one dear Marie ,wonderfully captured,it gives brief look how amazing these stacks are thank you so much!

i love to see how water shape shore with it's constant attempt ,nature has power to make things go accordingly indeed ,long process of shaping is not just great way of story telling to senses of viewers but also plays it's roll in the gradual change of appearance of earth indeed

Wow! absolutely spectacular images and your photography is exceptional. thanks for sharing these.

WoW!!! your beaches are so different than ours but i really enjoy seeing the differences!!

the 2nd picture is extraordinary, 2 eye balls, a nose and a frowning smile!! the tea cup is also so interesting, it must be amazing to see in person!!

Beautiful formations. It is nice to see different geology along the ocean.