Back to the sea

Fishers are back at sea again since the lobster season opened earlier this week on Prince Edward Island. 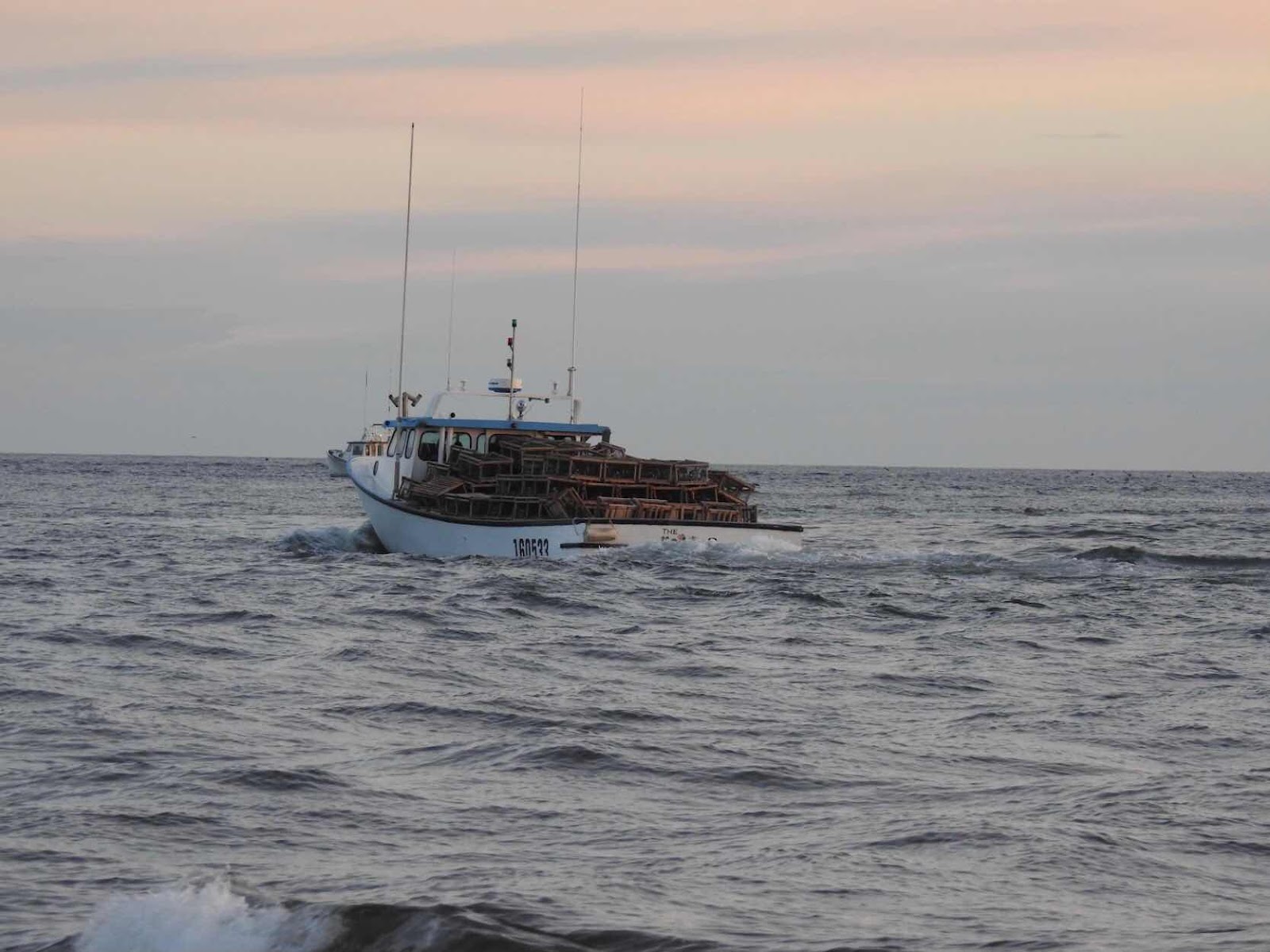 Prior to the start of the season, boats are returned to the water, traps and other gear readied. In addition, dredging of the waterways occurs since the sand around the island shifts over the winter and can pose a hazard to the boats. 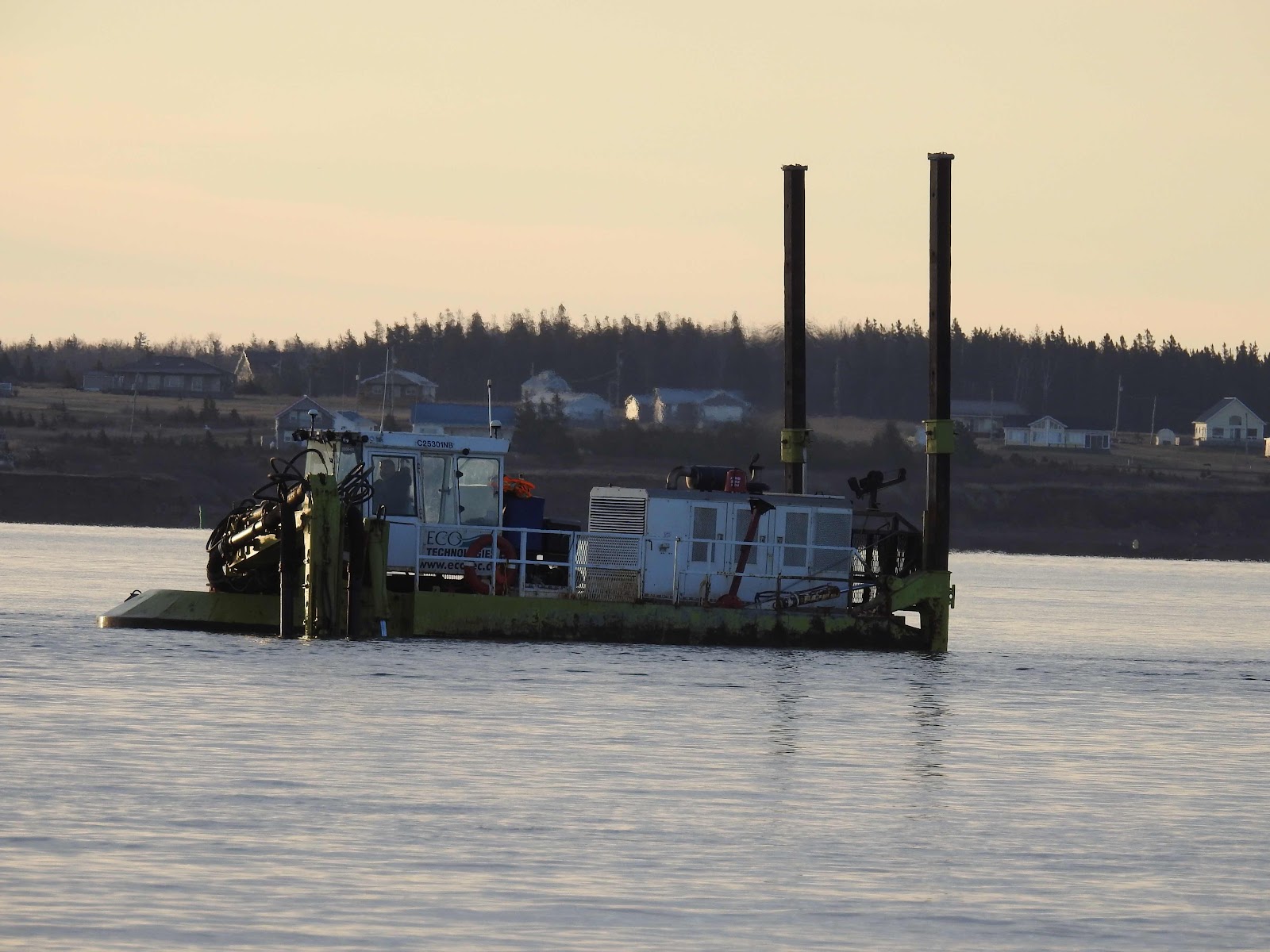 At Seacow Pond on the northwest corner of the island, this was the scene last week as boats and gear were prepared for the season. 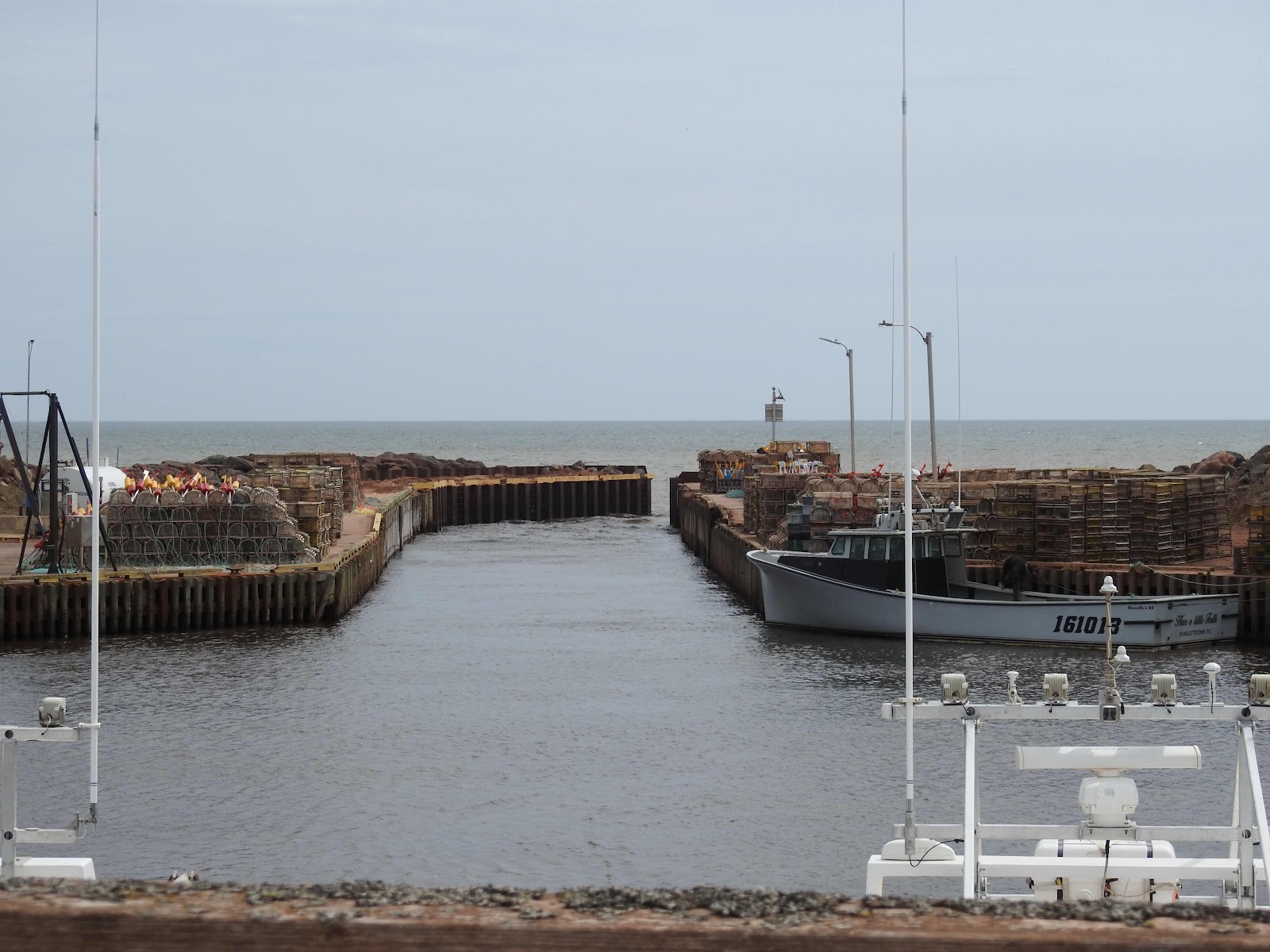 Boats lined the pond and along the wharf, by each boat, its gear was piled, ready for loading on the big day. 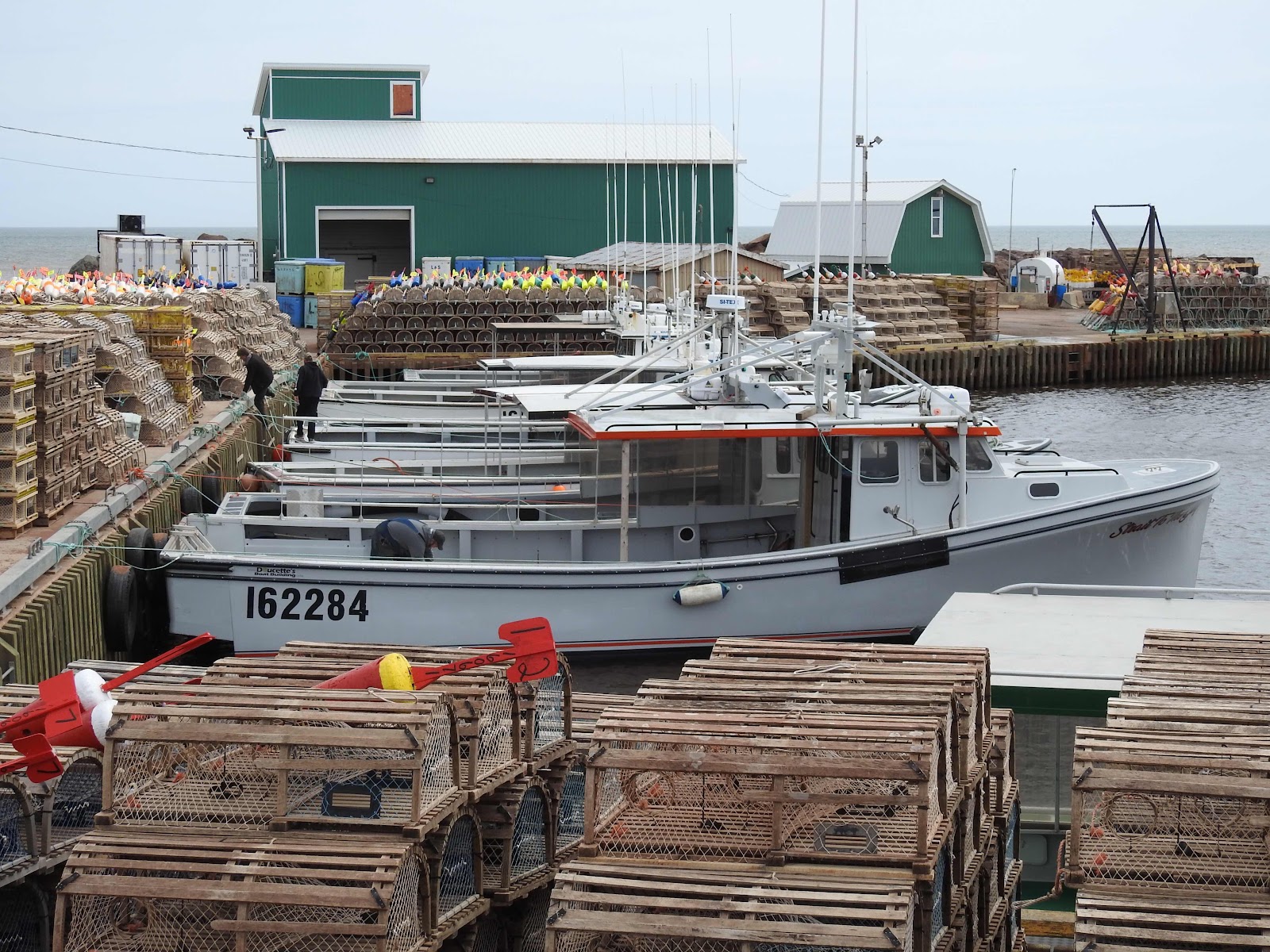 It was interesting to be close enough to see the weight in each trap, which causes it to sink in the water. 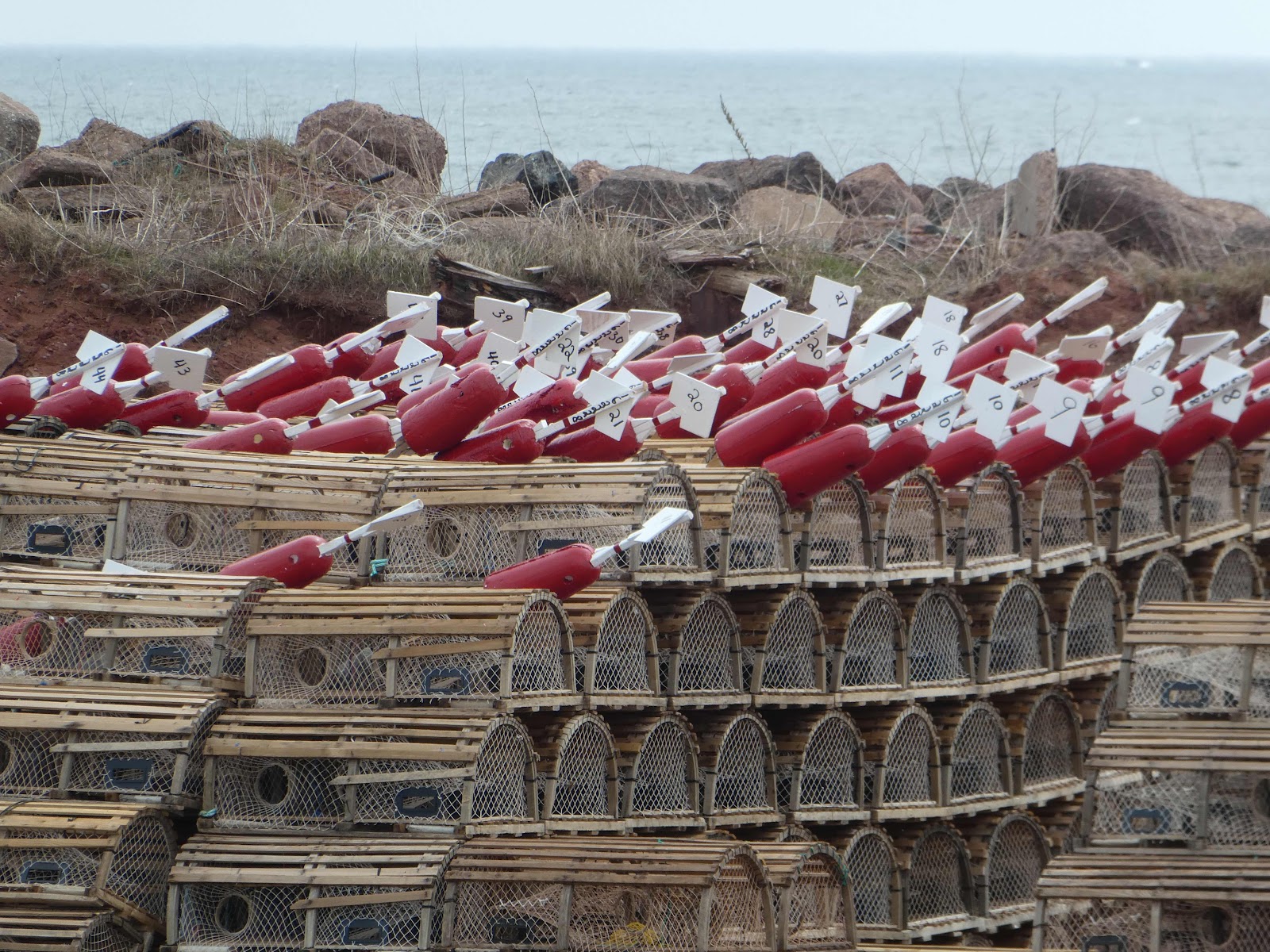 The buoy which is the marker for each trap has a weight as well which keeps the buoy upright in the water. The weights on PEI are concrete, made by the fishers. 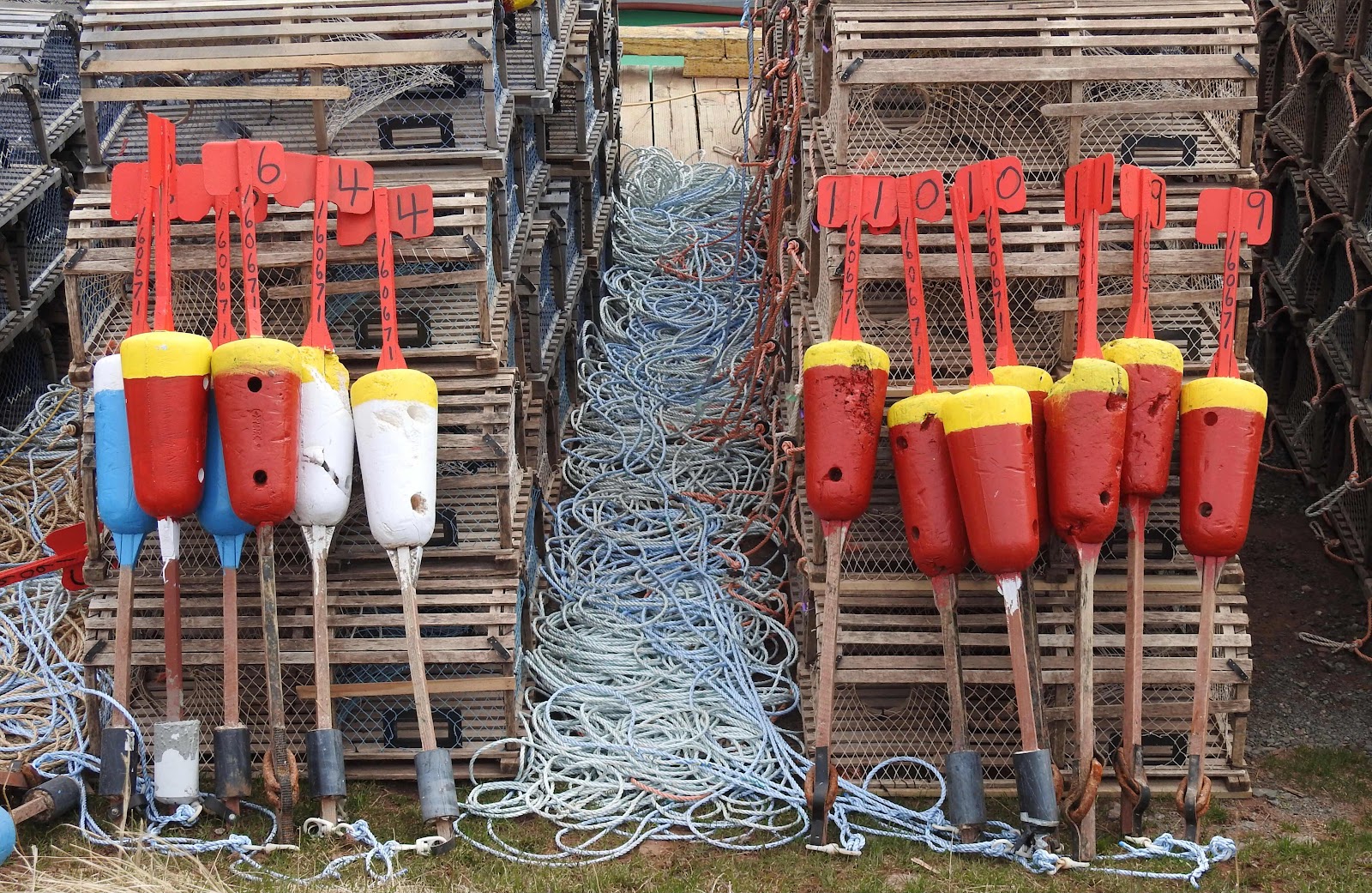 On Setting Day, the opening of the season, fishers load the gear and head out to the fishing ground as their families gather along the shoreline to wish them a safe and successful season. 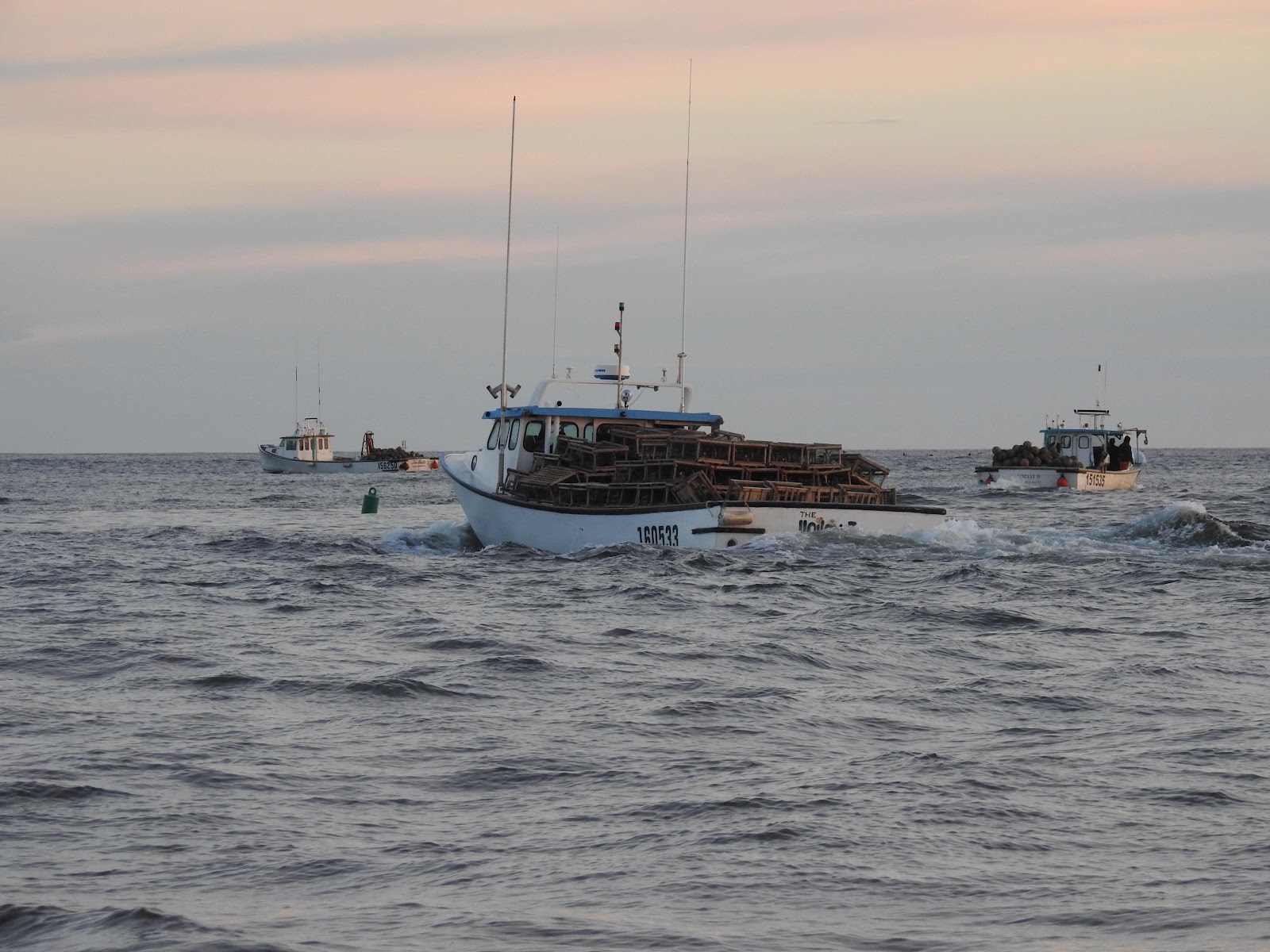 Last week in a nearby inlet, we saw a dredger which was pulled ashore,

allowing us to see the cutter head which bores into the seabed. 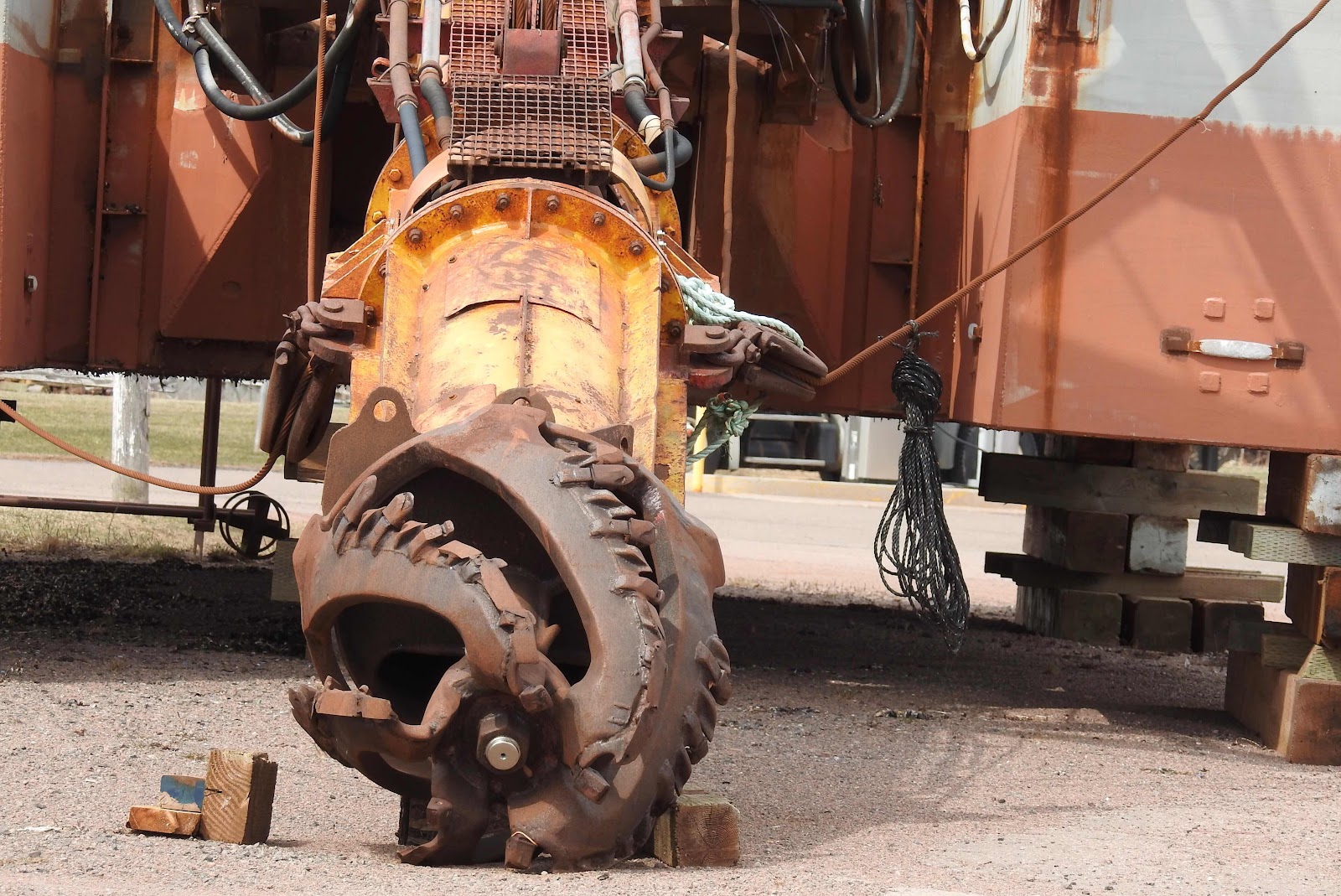 The sand is sucked through the dredger and ejected away from the shipping channel. With the weather co-operating, the dredging done and gear and boats ready, Setting Day was Tuesday.

That day on the northwest coast, we had our picnic lunch in the yard of Christ Church at Kildare Capes, a peaceful setting along the coastline. There is a stained glass window at the back of the church with the words, “Peace be still,” whilst Jesus stands in a boat amid stormy seas. It is a reminder of the danger of working at sea and the faith of many people on the island. 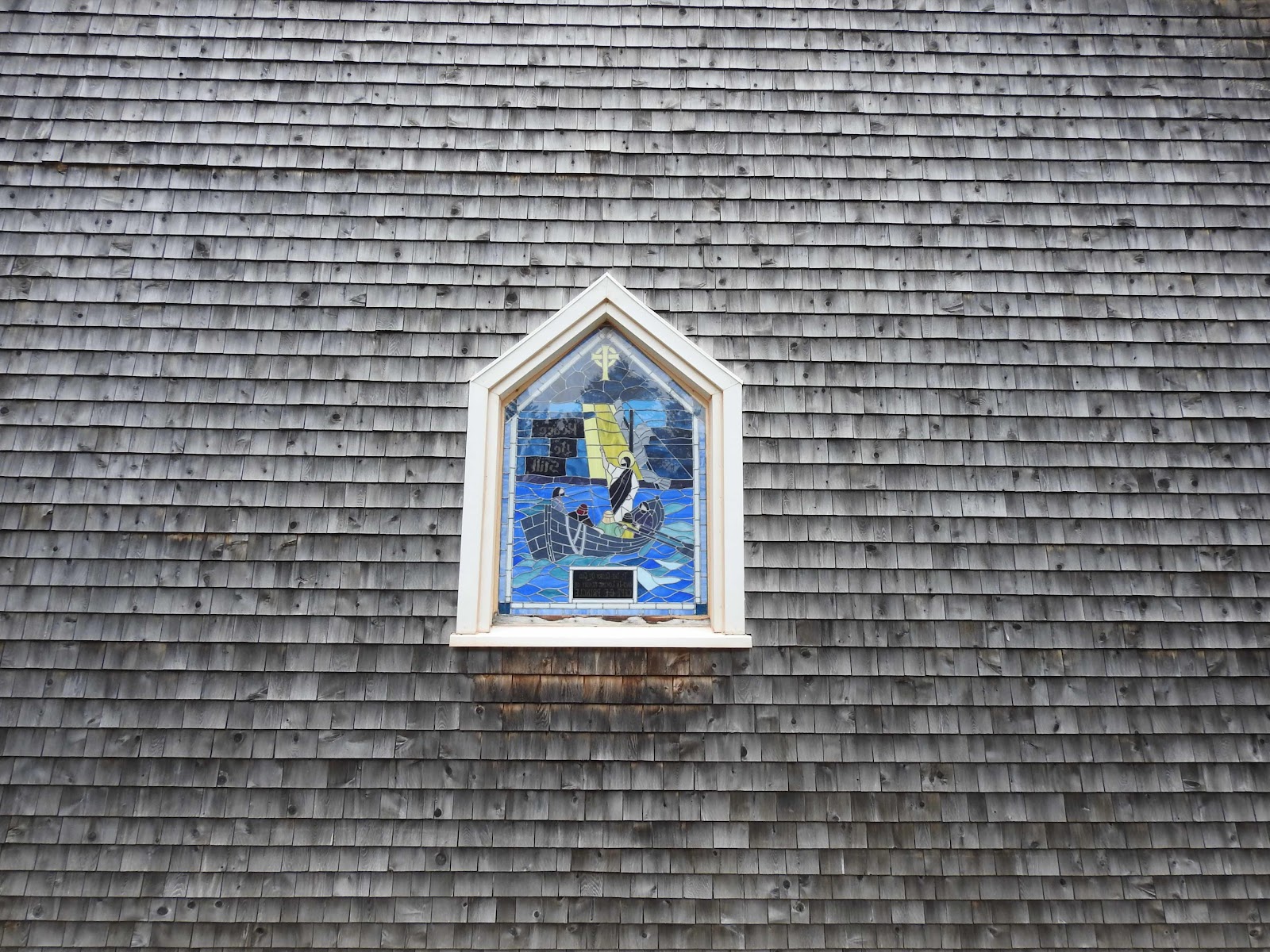 Meanwhile, as is the tradition with many island families, we are having our first lobster of the season for Mother’s Day this Sunday. Even the children enjoy a meal of lobster. It is a part of island culture which our family enjoys.

What a thoughtful post. Are there in fact seacows to be found at your latitude? I thought they were warmer water creatures.

There aren’t any seacows at this latitude of course, but the name is used in several places around the island. There’s probably an interesting story there that I am unaware of…yet.

Your water always looks choppy. Is there any places around for swimming? It has been suggested that we not feed the birds also....and I am not feeding much but they are coming to the yard looking for food since I always feed so I am giving them some. Keeping the area around and the feeder cleaned...hoping that helps.

The lobsters are all shaking in their tiny boots!

People swim here anywhere there is a sandy beach and the wind isn’t too high to make the water choppy, of course.

Seafaring is a dangerous occupation...

Thank you for your answer to my question...

Thank you so much Marie for sharing all this interesting information on the opening of Lobster season.
There is a lot of work involved to just get things started.
I do love lobster.
Sue

What a nicely documented sequence.

As far as lobster goes, I’ve had it twice, and that is probably sufficient for a landlubber.

You, and the fishers, must be so excited. Thank you for this photojourney.

What a dreamy sky and calm sea as the boats set off.
The stained glass window is beautiful. Being at the back of the church, I wonder if it is facing the sea.

The window does face towards the sea but the view is obstructed by trees.

Thanks for sharing life around your area. This is all so unfamiliar to me,living on the prairies.

We simply do not realize the vast work and resource required!

For Such An Overcast Day, You Sure Brightened My Day - Thank You

Good luck and safety to all your fishers.

Yay for lobster season. It is similar here but for blue crab season.
Great views of the fishing boats. Sounds like you had a lovely view for your picnic. Take care, enjoy your day and happy weekend.

this is lovely to see that your island is ice free completely now dear Marie and life's hustle and bustle is being celebrated here and there exquisitely:)

now in my imagination i will be witnessing you riding bike and exploring your beloved island like a butterfly my friend ,may you be safe each moment and each step !

i so enjoyed the glimpse of how people of the island are embracing the glorious season .how nice to learn about amazing t traditions .
more health ,peace and joy to you and yours!

Marie,
I really enjoyed this post. I gained insight into what it is like in a fishing town getting ready for the season- so interesting. Happy Mothers Day and enjoy your lobster.

As always your post is beautiful. I love seeing your Island photographs too. The picnic sounds lovely and the stained glass window is gorgeous with a wonderful message.
Hugs June x

Marie, I really enjoyed the post/photos. It is all so interesting, and that cutter head looks like something from a moster movie. I am so glad you got a photo of it. I would never have dreamed it looked like that. Of course I can't tell you what I would have thought it looks like.

A good glimpse into the seafaring life on the east coast, which is different from ours here on the west. No lobsters here. But I did enjoy them when we were out east a few years ago. The fishermen work so hard in often perilous conditions. Enjoy your Mother's Day lobster!

mm, lobster. Your fishing boats are very clean! Not like the ones around here. And your seasons always seem to change quite quickly. I have noticed this before on your posts.

An interesting story about life and tradition on the island. Thanks for sharing.

A tough way to make a living.

We have one species of squirrel on the island, the Red Squirrel.

I been out crabbing in Pacific.
Coffee is on and stay safe

A wonderful report on the beginning of lobster season. The photos are spectacular.

What beautiful, atmospheric pictures. I particularly like the one with all of the lobster traps. The thought of fresh lobster makes me swoon.

Isn't that dredger amazing. Something about machinery always interests me.