On summer afternoons, we have a drink on the balcony. It may be a glass of wine, a cold beer, a gin and tonic, or more commonly, ice water. While there are some constants associated with the location, there are often surprises as well.
One of the constants is the wind turbines. This past month, they produced fifty percent of the energy needs of the city of Summerside. There are four turbines north of the city and they are visible from our balcony. 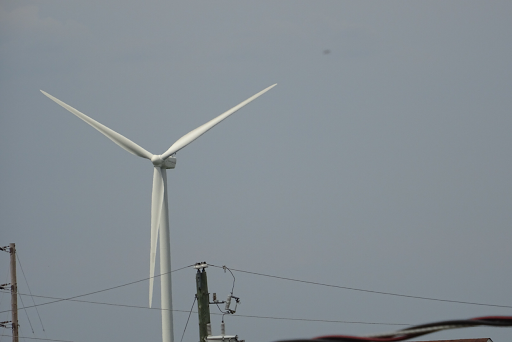 We always know the wind direction from the direction of the turbines. This information has become more important to us since we retired.
Malpeque Bay is north of our location as well.

Summerside sits on a thin strip of land between Malpeque Bay and the Summerside Harbour. Malpeque opens to the Gulf of St Lawrence while the harbour at Summerside is on the Northumberland Strait. North or south, the ocean is never far away.
Birds are often visitors as they sit on the roofs or utility lines. Their antics are entertaining. This tree swallow had a lady friend on the line with him. He made amorous advances to her but she rejected him, several times, then flew away. 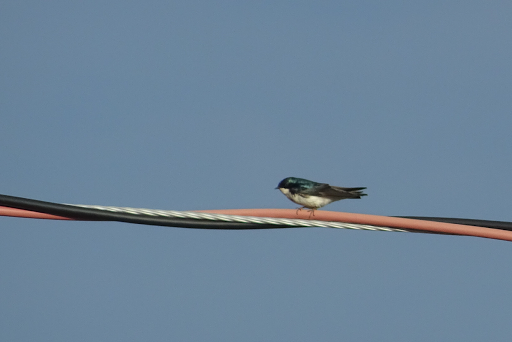 He sat, dejected, for the longest time. Was it the wind which ruffled his feathers? 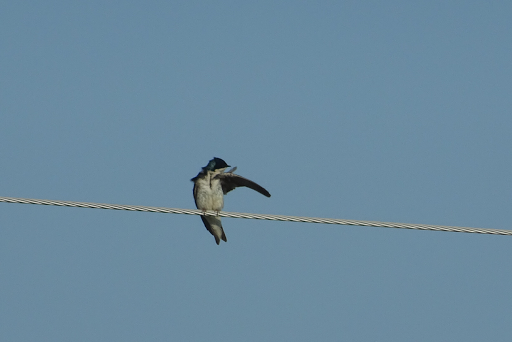 This song sparrow, one of a pair with a nest in our flower bed, sat on the utility line waiting for us to leave, rather than chance revealing the location of the nest. The pair of sparrows was protective of the young. 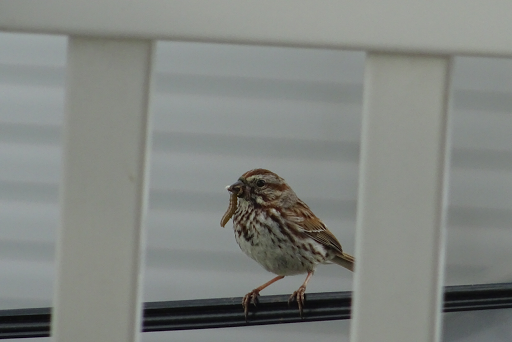 We are on the flight path of cormorants as they travel between Malpeque Bay and the harbour at Summerside. They frequent the area around the Indian Head Lighthouse in the harbour. 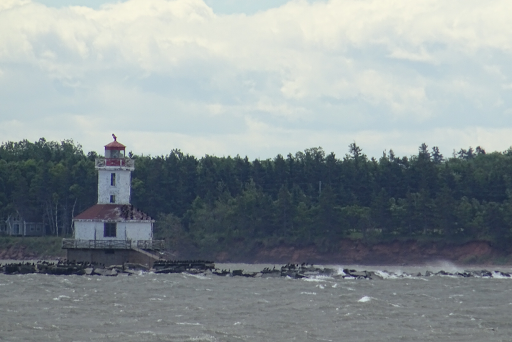 These birds often travel in groups and are inclined to travel in the v pattern typical of geese, though they are silent unlike geese. 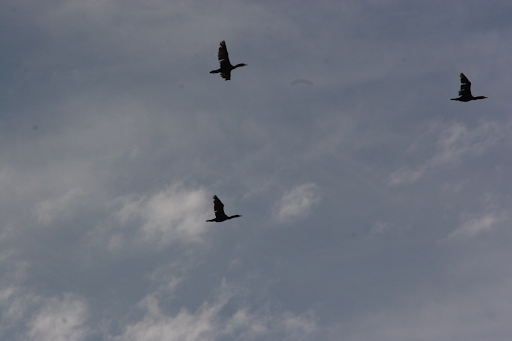 One calm day recently, we could hear the action of wing against air of a bird flying at a low altitude. On a windy day, we noticed that the young cormorants often gave up flying into the head-wind and turned back. The older birds persevered, though flew much slower than their usual speed. 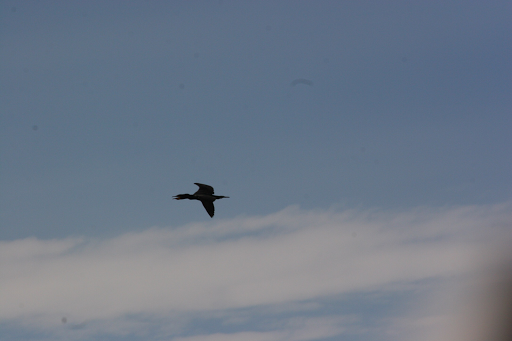 Cormorants never land in our area and getting a photo of them in flight has proven difficult.
Until 1991, there was a Canadian Air Force Base here in Summerside, Prince Edward Island. Today, Canadian aircraft from Nova Scotia do maneuvers in the skies above Summerside and use the air field. 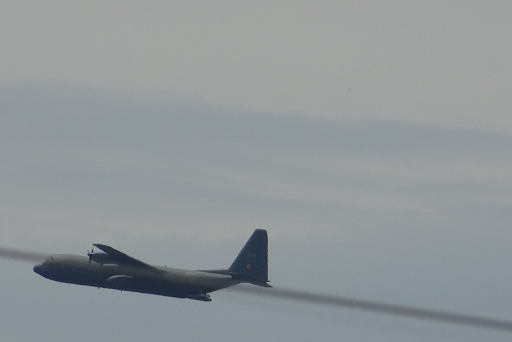 Sometimes sky diving is part of that training as it was on this day. We could see the parachutes in the distance as the aircraft flew overhead.
There are but a few months when we can enjoy the balcony and making the most of those days is important to us. Besides, the balcony never disappoints.
Posted by Marie Smith at 04:16

When I was a young woman, I was never aware of the direction of the wind. Once I became a skydiver, however, it became very important to me, and now I am always aware of it, its direction and its strength. I love watching the birds and sometimes wish I could fly like that! Interesting post, Marie. :-)

Your balcony is a good place apparently. How nice that you get to sit and enjoy the view for these few months.

Good to see the birds but I dislike wind farms. Unsightly inefficient things.

A cold drink on the balcony is one of the delights of summer. And you have so many things to look at.... birds, planes, the sea, even the wind turbine, lovely!

Because we can get nasty storms in the summer I always pay attention to the direction of the wind. My husband and I used to sail a small boat and that made both direction and strength of wind important. I love watching the lives of birds. It is my reality TV.

I like the sight of revolving wind turbines. There are several in a row located in an industrial section on the way to my daughter's house.
I have far fewer birds in my new house; the more opportunity to learn to distinguish between sparrows.

We spend a LOT of time watching the birds. Each and every day. And marvel at it. Hooray for wind turbines. I am hoping to see more of them here. And more solar cells too.
Loved this post. Thanks.

I think of you every time I see the skydivers, Jan. There were three of them today.

There is always something interesting to see on the balcony, AC.

I like the wind farm. There are a number of them on the island and many big farms have wind turbines too. Being energy self-sufficient would be a great goal I think.

It is a great spot with lots of variety for sure.

I love the birds too. As a younger, working person, I did not stop to notice them. Now I see them as never before. Such amazing creatures!

The sparrows are amazing parents. We've seen a few different kinds of sparrows now but the song sparrows are the ones who nest in our flower beds.

The birds are amazing creatures. We love them too. And the wind turbines of course. Solar panels are becoming more common here as well.

There seems to be so much to see from your balcony! Does the wind turbines ever affect the birds? Sarah x

I have looked for reports of birds kills due to the turbines locally. There is a larger wind west of us and the number of bird deaths is not high, though there are some deaths each year. Fog can be a factor or birds around the turbines, but we don't have much fog.

I LOVE balconies like this where you can SEE things, Marie. How fun for you. We see cormorants here in the Netherlands, usually on the ground sunning/drying themselves. I seldom if ever see them flying, so lucky you. Maybe I just need to sit still long enough to see it happen?! :)

You've pushed me to check out the map.

It is a great place to relax.

Between us, we get the full cormorant experience, Ginnie!