The sun was low on the horizon as I drove westward, making it difficult to see on-coming cars or the road. I focused on the edge of the pavement on the passenger side and slowed as I drove. It was a stressful way to end a difficult time.
I was returning from Mount Pearl, Newfoundland to my home in Buchans after my father's death. I spent a week with Mom and my brother after Dad died, helping Mom do a few of the deathly details you don't think about as you accompany a loved one to the end. Although glad to be going home to my husband and daughter, I was heart broken. I could only imagine what my mother and brother felt and I was not there to share it.
The last time I saw Dad was two days before his death. We didn't realize how close he was to the end, never having seen a death from cancer. Dad had beautiful brown eyes, the windows to his patient, kind soul. Those eyes were all that looked familiar; Dad was swollen, barely conscious. He still could speak and we parted after loving goodbyes. "His spirit is eager to leave now," I said to myself as I gazed into those eyes that day.
There was a moment on that journey home when a straight stretch of highway to a hill lay before me. The sun was behind the hill now and a brilliant sunset was imminent, with flaming colours. The road appeared to come to a point in the flames and I thought of that gentle spirit soaring now, free of pain. I felt it as Dad's way of saying he was at peace.
Several days ago, on a walk by the bay, I took this picture which I didn't really see until I downloaded it to my iPad. 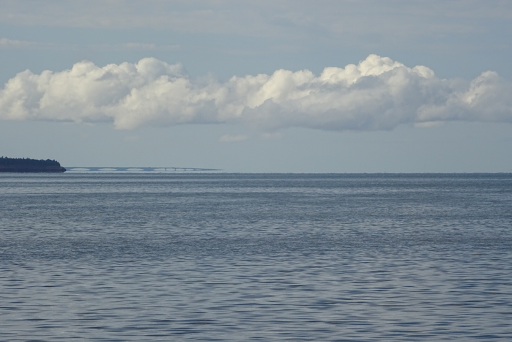 It startled me at first. I realized it connected me to that previous experience, how the bridge disappears into the air, even though it connects to the land on the far side. Unseen though it is, we know it is there.
Who knows what is to come? But, every now and then, life has a way of reminding me of the faith of my youth and it is comforting. Maybe that is all it is meant to be, comfort in the face of the eternal nothingness. Or maybe...
Posted by Marie Smith at 04:17

It is always so hard to lose a loved one. Your beautiful post brought tears to my eyes, thinking of those I have lost and feeling the pain you are experiencing. What a wonderful bridge to Heaven you shared with me. Blessings to you and your family.

It is a painful growth accepting our lives are limited and and limitless at the same time.

A beautiful picture, and ties up your loose thoughts as much as that can be done. I think the cloud band is meaningful, too. I just put in my meaning, then erased it.

It is so hard to say goodbye to a loved one. It is interesting how things in the present brings the memory back. Everything passes but God is eternal. What a beautiful photo you got there.

Who knows, but we keep going regardless. Your photograph speaks volumes ♥

So sorry for the loss of your father, it's hard to see them decline with age never mind cancer. When my dad found out he only had months to live he made it a priority to live each day to the fullest and kept reminding me to do the same every day.

Such a heart-warming reminder.
I think of my father often but ALWAYS in the autumn when I first see the sprays of orange berries he brought home each year.

Thank you Jan. I wish the same for you.

I wish you'd left your thoughts about the clouds, Joanne.

I love this photo too, Angela. It is inspiring I think.

We just go by faith I guess, Ann.

Live as if every day was the last, is a good way to live, Judith. One day it will be.

Those memories are precious, aren't they, EC?

What a startling revelation. Friends with pets call it the rainbow bridge. By george, I think you got it.

What a perfect picture of the clouds. I love it.

I don't know about that but I love the picture!

The clouds are beautiful! I love them too.

Each word you wrote touched my heart, i lost my parents few years back and I was not there to say last goodbye to them still it hurts me till my soul may God bless your father with peace and joy of heaven amen

Amen! Thank you, Baili. We have all lost people we love and our shared human experience brings us together, wherever we live.

Every death of a loved one has a way of reminding you of the spiritual side of life and opening your mind to the beauty of life and love. I don't think I knew what love is until our son died.

Losing a loved one is a spiritual experience for many people. Thank you for sharing what you learned from the death of your beloved son.