It rained buckets, the wind bent the trees and the temperature was unseasonably cold. It was one of those stay-in days unless you had to venture forth. We didn't.

The next morning it was sunny though chilly again. That sun alone was enough to tempt my husband and I to take our latest visitor, Georgie, the golden grand-dog and head out. 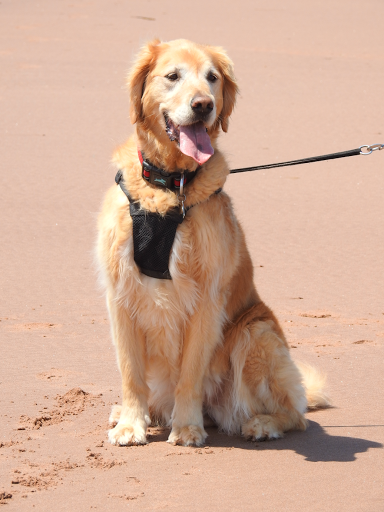 We dressed for the cold.

Thunder Cove on the north shore was our destination. It is a pristine beach 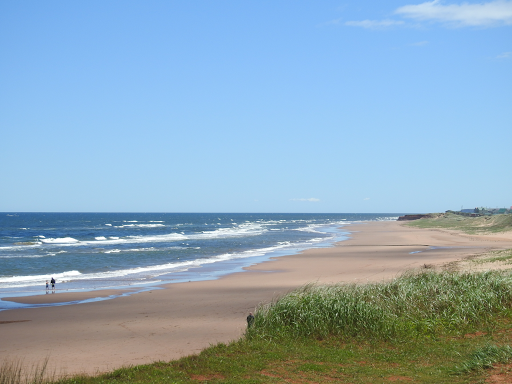 with a sandbar offshore, making the waves break a distance from the beach. Cliffs in the west and sand dunes in the east, give a variety of island beaches in one setting. Only a handful of people were on the beach though many of the cottages in the area were occupied.

Lunch was at cottage level overlooking the beach as we watched the lobster boats travel the Gulf of St Lawrence. 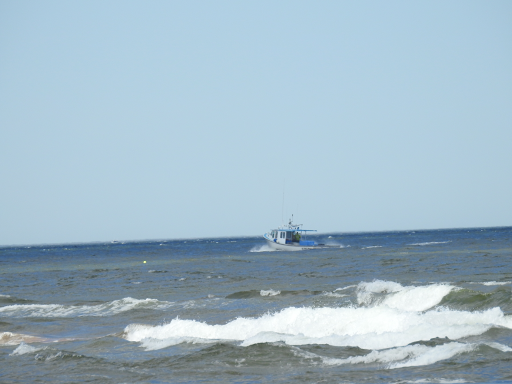 The sound of the ocean filled the spaces in the conversation. Listening to the sounds of the planet was a welcome break from the clamour of world news.

This beach has a tea cup sea stack which we wanted to see again this year. However, high tide made that part of the beach inaccessible to us older folk. People with more courage and younger joints climbed the cliff to transverse the high tide mark. 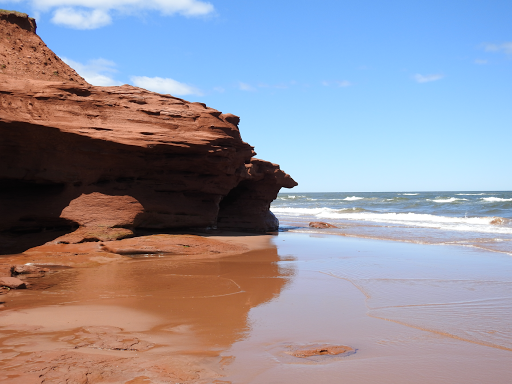 We retreated but not before we had a closer look at the sea caves. 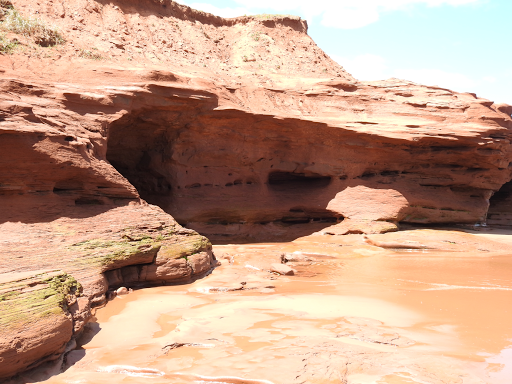 One might expect giant mice to peek out of the mouse hole-like erosions in the sandstone. 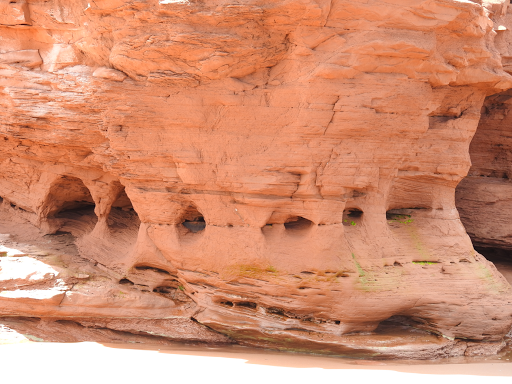 Some holes were cave-like, big enough for a person to stand inside, bigger than last year as you can see. 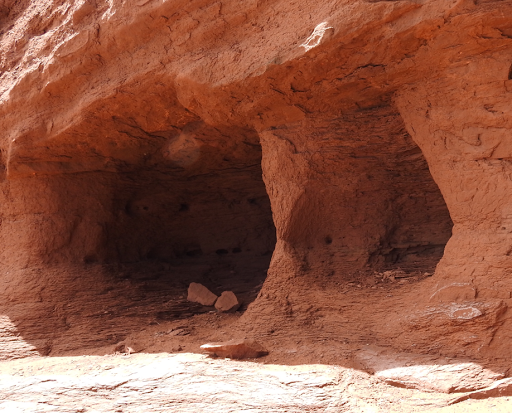 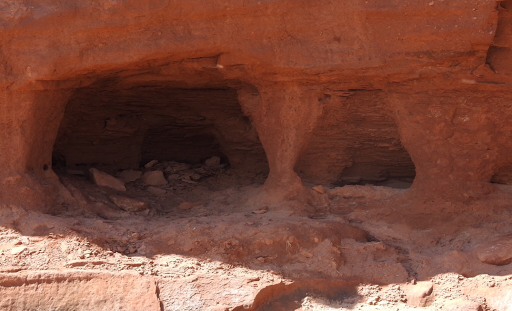 On the east side of the beach, Morrison's Pond empties into the Gulf, crossing the beach. We could hear the sand along the banks of the stream falling into the water.

Rather than cross the stream and get wet on this cold day, we left Thunder Cove to return on a warmer day at low tide.

That ocean is a monster of a machine. Makes me so humble.

As always, beautiful scenery and Georgie is precious! Hope you have a nice Monday.

The beach is so lovely! And yes, the sandstone is crumbling away quickly. That was an amazing comparison shot. I love your posts, I can join you on that beach, also dressed for the cold since it's chilly here, too. :-)

Giant mice!! Wouldn't that be fun!

Beautiful and stunning landscape, thanks for sharing!

Sounds like a wonderful walk Marie, as you say for a short time ☺ It's quite worrying how much and how relatively speedily the ocean waves wear away the coastline!

Wow, that sandstone is eroding fast.
It is simultaneously beautiful - and scary.
A lovely walk though. Thank you so much for taking us along.

Such beautiful landscape Marie. I enjoy taking the walk with you, the scenery is absolutely gorgeous.
Thank you and have a wonderful week.

So true, Tabor. The sound of the sea is over powering in a way.

Georgie is as much our pet as she is our daughter's, I think, Mildred.

That beach is one of my favourite, Jan. However, it is hard to choose one.

My imagination goes crazy in these places, Debra. But, would giant mice be rats?

It is a stunning beach, Blogoratti.

That walk was exceptional, PDP.

It amazes me how quickly the sandstone is disappearing, EC.

The landscape along that beach and the seascape are gorgeous, Bill.

Beautiful ocean, beach and sky as always! Georgie must be happy with you on the beach!
I look forward to seeing your big lobsters landed from lobster boats. Wishing you a good new week.

what a glorious walk you and your hubby had with the Grand-dog.
We have a granddogger here too. We take care of her occasionally. Snicker is her name for Snickerdoodle..she's a labradoodle....what else could we name her?

At a previous home, our neighbor had two dogs that looked just like Georgie. They were brother and sister. The guy worked all day and those dogs were as much "ours" as his! We truly loved them.

Good decision to come back another - warmer - day

They are gorgeous animals, Mildred! They can get into your heart.

I'll get some pictures of the lobsters, Tomoko.

We have to watch the tide tables too, Cathy.

My camera trigger finger gets itchy when viewing some of your scenes.

A wonderful walk with such a cute puppy!!

Beautiful pictures. So many places to explore. I always see a wonderful mystery whenever I see a good place to walk.

The island is photogenic, AC.

I am having trouble publishing comments, so I had to copy and paste.

It was a beautiful day after the storm, in spite of the cold.

So true, Ratty. There are interesting places along that beach which would make a great mystery.

I hope that storm isn't heading in our direction, it does look rough. Sarah x

The wind was high that day, Sarah.

I love taking a walk with a dog. It is like sharing with a child - they see and hear .... and smell so much that we would miss without them.

This dog is a curious one for sure, Barbara.

I remember the red shorlines, but not the little caves. We may have to return!

You have to go to the right beach, FG.

this year weather sounds like made one .
George is a Marvelous dog!!!

cave like holes look very interesting .
i am glad you enjoyed the beautiful day after storm dear Marie!

It is a great beach, Baili. A breeze on hot days is welcome. This particular day was cool.