We recently visited the Francophone area of Prince Edward Island, the Evangeline region, just west of Summerside. The area is home to Acadians, 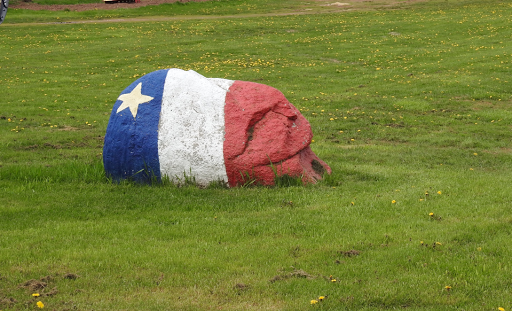 French speaking descendants of the original French settlers to the island, who survived the expulsion at the hands of the British from 1755-1764.

Headed to Evangeline, my husband and I stopped first at a nearby provincial park at Linkletter. Here, at high tide, walking on the tons of seaweed was akin to walking on sponge. 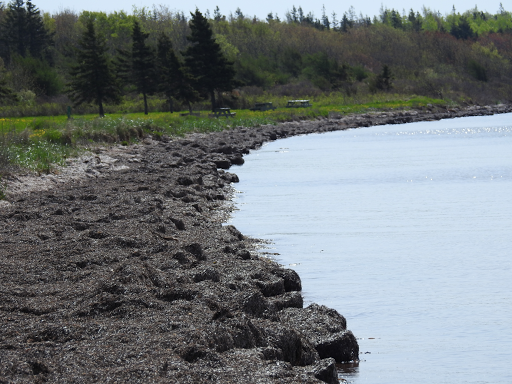 The Confederation Bridge is visible in the distance as is the Indian Head Lighthouse at the entrance to Summerside Harbour. 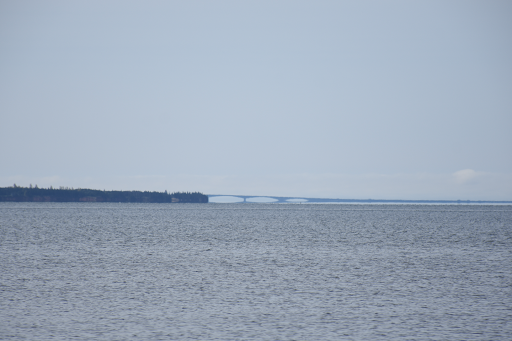 Further along the south shore, we dropped by the park at Union Corner where the bridge is visible again but appears as a mirage in the middle of Northumberland Strait. 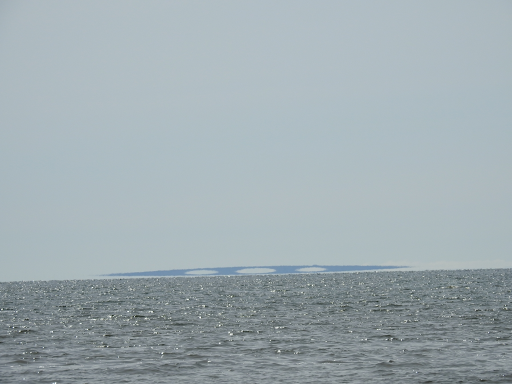 The layers of sandstone in the shoreline here are thinner than any we've seen elsewhere. 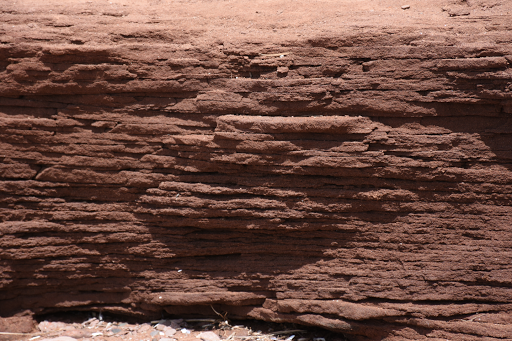 Nearby, the shoreline was lined with cottages, some of which were fortified against erosion. 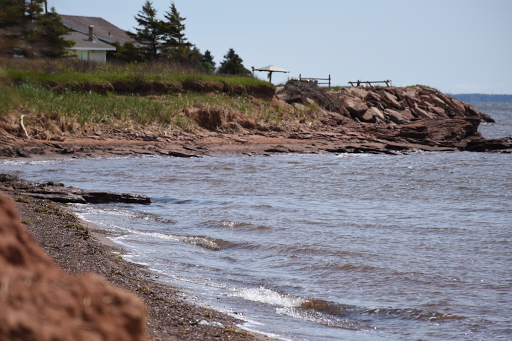 The lobster fishery begins in the summer on the south shore so the wharves are not busy as they are on the north side. In Evangeline, boats are still high and dry, waiting their turn at the lobster. We did spot one retired boat, which had seen better days. 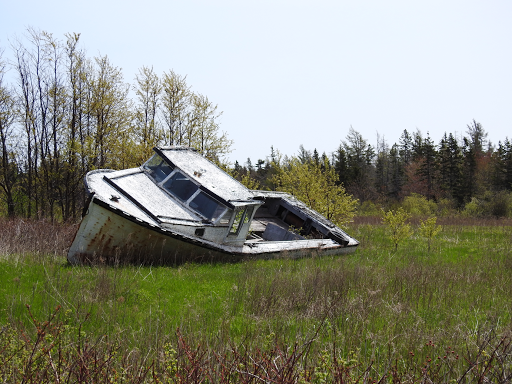 A cultural center in Abram Village is the site of summer musical performances in the Acadian tradition. 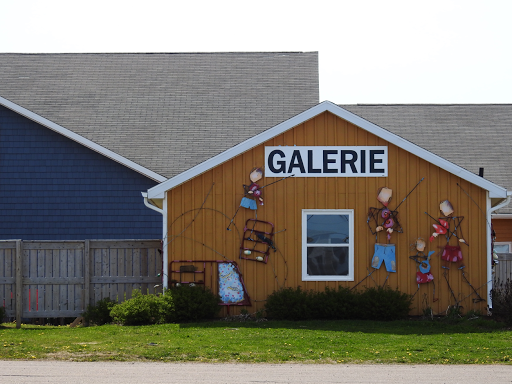 Those musicians on the Galerie walls will be joined by those inside playing Acadian music. And of course, there is the food!

Further along the coast, in the community of Egmont Bay, a beaver was busy in the Jacques River which flows out of Arsenault's Pond. 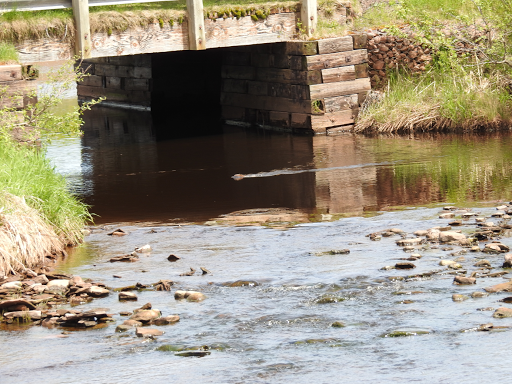 She, like the other beavers we've seen on the island, was impossible to photograph, as she disappeared under water when we tried a closer look.

The Jacques River has a fish ladder which allows trout, salmon, smelts and Gaspereau to swim up-river. Both the river and the pond above are licensed for sport fishing. 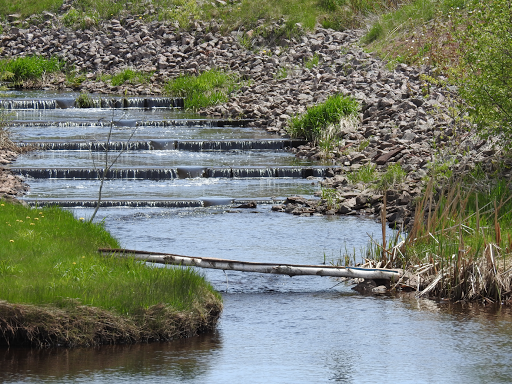 Gaspereau, the Acadian term for alewife, is a type of herring which swims from the ocean inland to spawn, as do smelts. The ladder makes it easier for the fish to get into the pond.

We were familiar with fish ladders from our days living near the Exploits River in central Newfoundland. There, Atlantic salmon, much bigger fish than smelts and alewives, use the ladder at Grand Falls-Windsor to swim up-river. We didn't see any fish negotiating the ladder in Egmont Bay.

We enjoyed our exploration of part of Evangeline and will return soon.

What an interesting place you live in, Marie. I didn't know anything about this part of PEI and will find out more from the internet. Thanks for the great pictures and commentary. :-)

I hadn't quite realized that there was an Acadian presence in PEI.

What an interesting trip you had to Evangeline. I've heard the song "Evangeline" and it is very sad, what happened to the Acadians that had to leave. You always share such interesting photos, and I'm thankful to be able to tour the island with you virtually :)

A wild and beautiful looking place. I remember reading Longfellow's poem "Evangeline" in the 4th grade, that led to studying the history. One of my favorite bands Beausoleil wrote and recorded "In Search Of Acadie." Lovely, sad, and in French. Fortunately they included a translation, my high school French isn't holding up. https://www.youtube.com/watch?v=OQlxsLPcqEo

Beautiful landscape, a nice scenic tour. I do like that retired boat, such a great photo opp. Well done!
Have a wonderful weekend Marie.

Another lovely meander with you. I had read about fish ladders - but never seen them. Thank you so much.
And that is a LOT of seaweed. I suspect I would have tried to avoid walking on it (not very surefooted these days).

Beautifull and fascinating. I hope you got to listen to some of the music.

A small but vibrant part of the island, AC.

I love the Galere too, Debbie. The boat is sad in a way, to me anyway.

I am happy to take you around the island, Marilyn.

Thanks, Celia. I will check it out.

Thanks Bill. When you look at the world through a camera lens, you see things you would not have noticed before, as you know.

I was happy to show you one, Debra.

I am always concerned when I walk on seaweed Iike that, EC, concerned I will fall through and break an ankle or something else. I shouldn't walk on it either. It is so unusual, I am drawn to it everytime however.

Nomusic this time, Mage. Another time we hope.

i viewed the boat as "decor"...we all have to retire at some point. perhaps it was replaced with something beautiful. I'm sure it served a great purpose in it's day!! have a wonderful weekend!!!

Watching the new and more serious version of Anne of Green Gables on Netflix. Wondering if it was filmed there.

I always learn something new when I follow your blog entries, Marie. I had never heard of the Acadians and now I feel like I've been there. Thanks.

You two do go on the best walks Marie! I've seen salmon swimming upstream in Scotland but have not seen a fish ladder before 😀

They only filmed some outside stock footage here sadly, Tabor.

Acadians who went to New Orleans are Cajuns, Ginnie.

Have a great weekend, Mildred.

Wish you could come along, SW.

We do have great walks, PDP.

I've never see sea weed piled up like that.

I hadn't seen this much seaweed before I moved to the island either, Barbara.

It is beautiful, FG.