The stream by the boardwalk in Summerside was busy earlier this month. A pair of mallards, male and female, were busy feeding in the stream near the entrance to the bay. The two were inseparable, as they swam the length of the stream to the bridge. My husband and I wondered if they were the same pair who appeared in the stream last spring after the ice melted.

On a recent visit to the gazebo which overlooks the stream, one of the ducks was chased by a muskrat. After a minute or two, the duck turned and chased the muskrat which swam away as the duck turned. We watched for a few minutes at the two animals at play. I took numerous photos but didn’t manage to take a focussed shot.

Another day, the mallards had friends come to visit. Six black ducks shared the stream with the mallards, without any concern for territory or conflict. Since both species are dabbling ducks, there were times when eight heads disappeared below water. 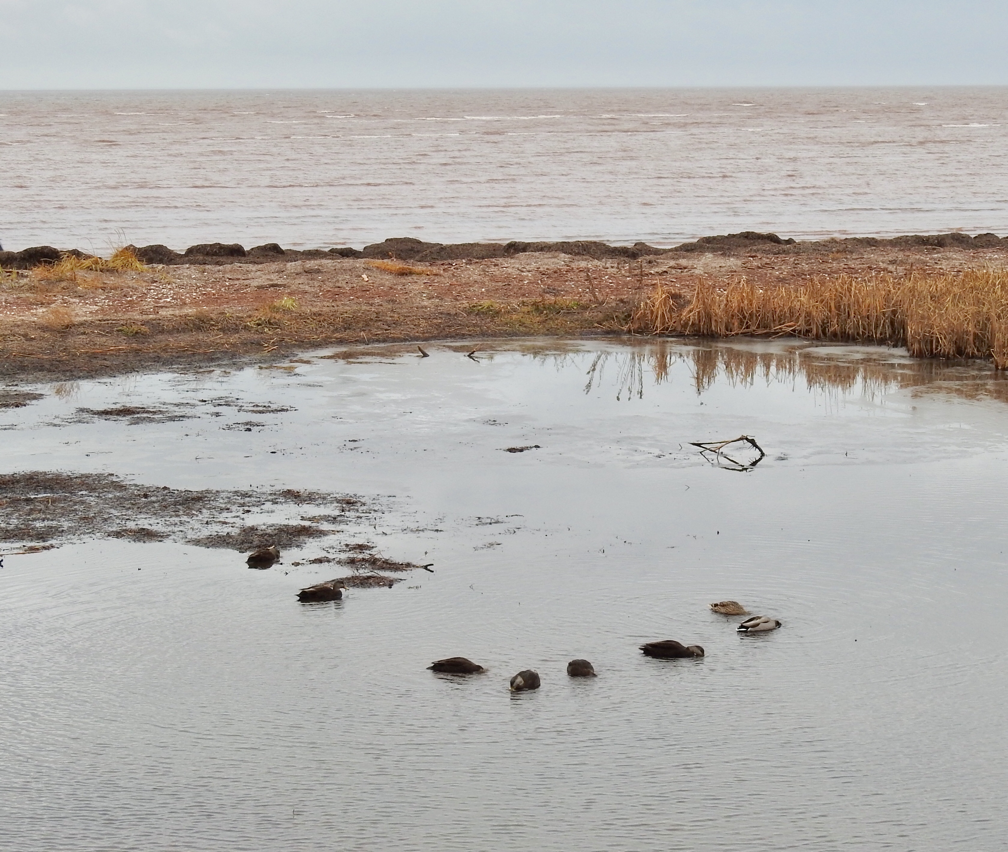 Adorable! They are sweet ducks and now they seem to be having some friends drop in for the holidays. :-)

So sweet. I love these shots. Love the ripple in the water of the first photograph.

Watching birds is such good therapy for me.

There's a little drainage pond near us. Most of it is frozen over, but I saw ducks this morning on a patch that was clear.

I've watched mallards and Canada geese share the same lake. It was spring, and there seemed to be brood sharing among the mallards. One duck would herd the who colony of chicks around the lake, but come evening they all split off to their own mama for the night.

they are fun to watch!! i always wonder how they are able to tolerate the temperature of the water....although it may be warmer than the air temperature!!

I don't know how creatures of God handle the cold weather, but of course He equips them for it. brrrr.

Synchronised dabbling cracked me up. And undoubtedly is MUCH better to watch than synchronised swimming.
Yet another lovely post. Thank you.

Ducks are fun to watch, you never know what they will do when others come in to their space. Your captured some nice photos Marie.

It seems all ended well! No grudges, no bitterness...
: )

I love ducks. Seeing them always makes me happy.

Cute! Imagine the duck and the muskrat chasing other and some funny cartoon music playing? I can picture it now! Great shots!

It should be, Debra.

They were gracious hosts, Jan.

I enjoy the birds so much, HW.

They are hardy creatures, AC.

It makes me shiver to watch them, Debbie.

I know. It is a natural wonder reallly, SW.

They existed in harmony, EC. And so entertaining.

Thanks, Bill. Ducks are among my favourite creatures!

Just sharing what was available in harmony, Catarina.

I can imagine it, Jenn!

I love the synchronized photo. So cute. You two capture some wonderful pictures.

Priceless for sure, Mage.

We enjoy our adventures, Mildred.