We are escapees, broken out of the house after the winter. My husband and I have had that first glass of wine on the patio and the first barbecue is on the horizon. The first picnic has already happened. The beach, heritage road and trail walks have begun. Meanwhile, our fascination with birds is on-going. They are everywhere we go these days.

From our patio, we watch a starling check out this bird house in the neighbour’s yard. 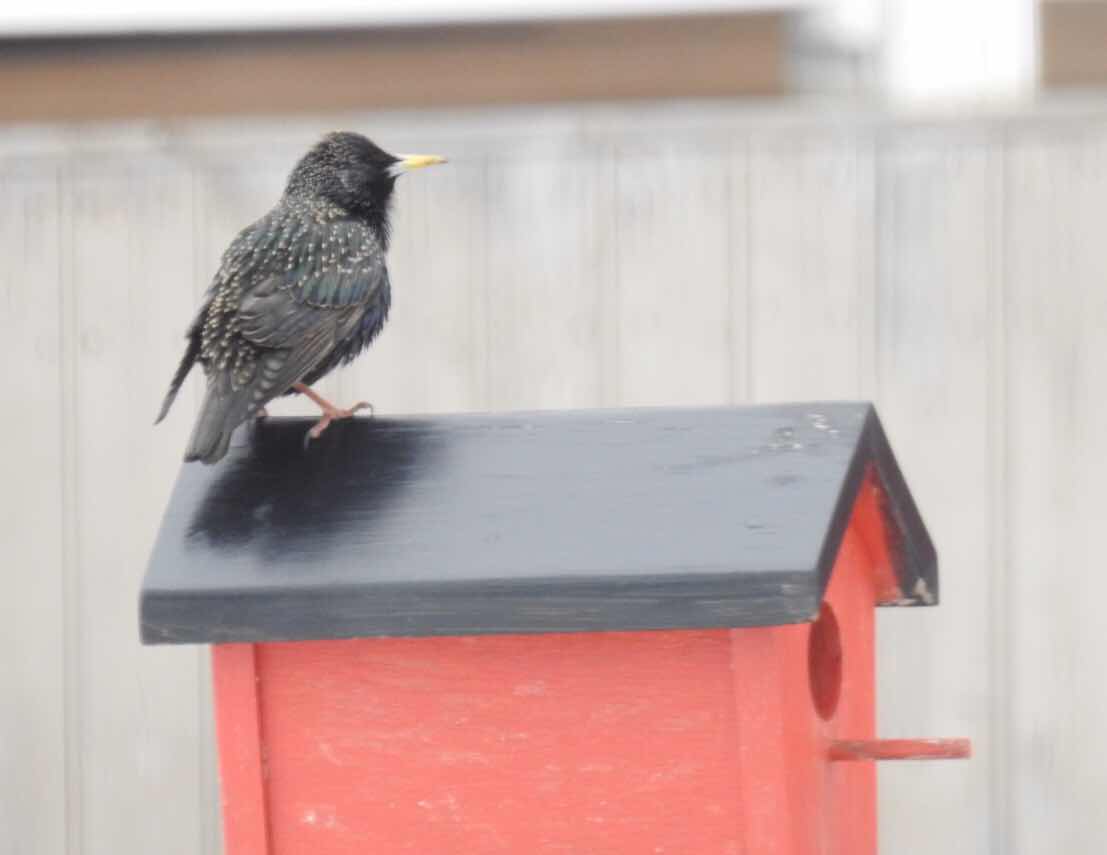 Gulls float around in Richmond Bay, having gorged on the fish which stir up the water around them. 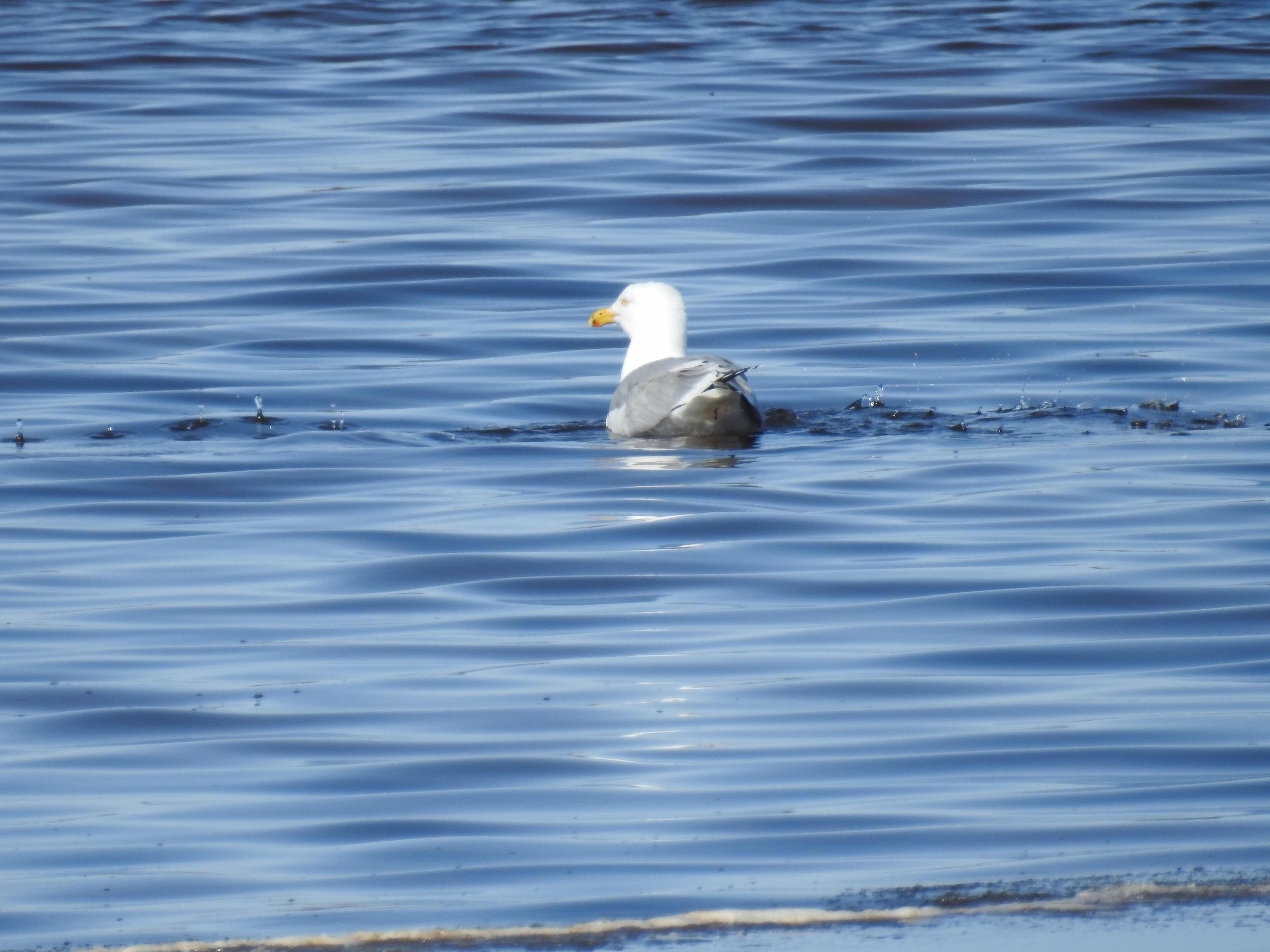 Puddle ducks, including male and female mallards, swim around water accumulated beside a field. They waddle away as we leave the car. I bet they complain to each other about our interruption of their morning routine. 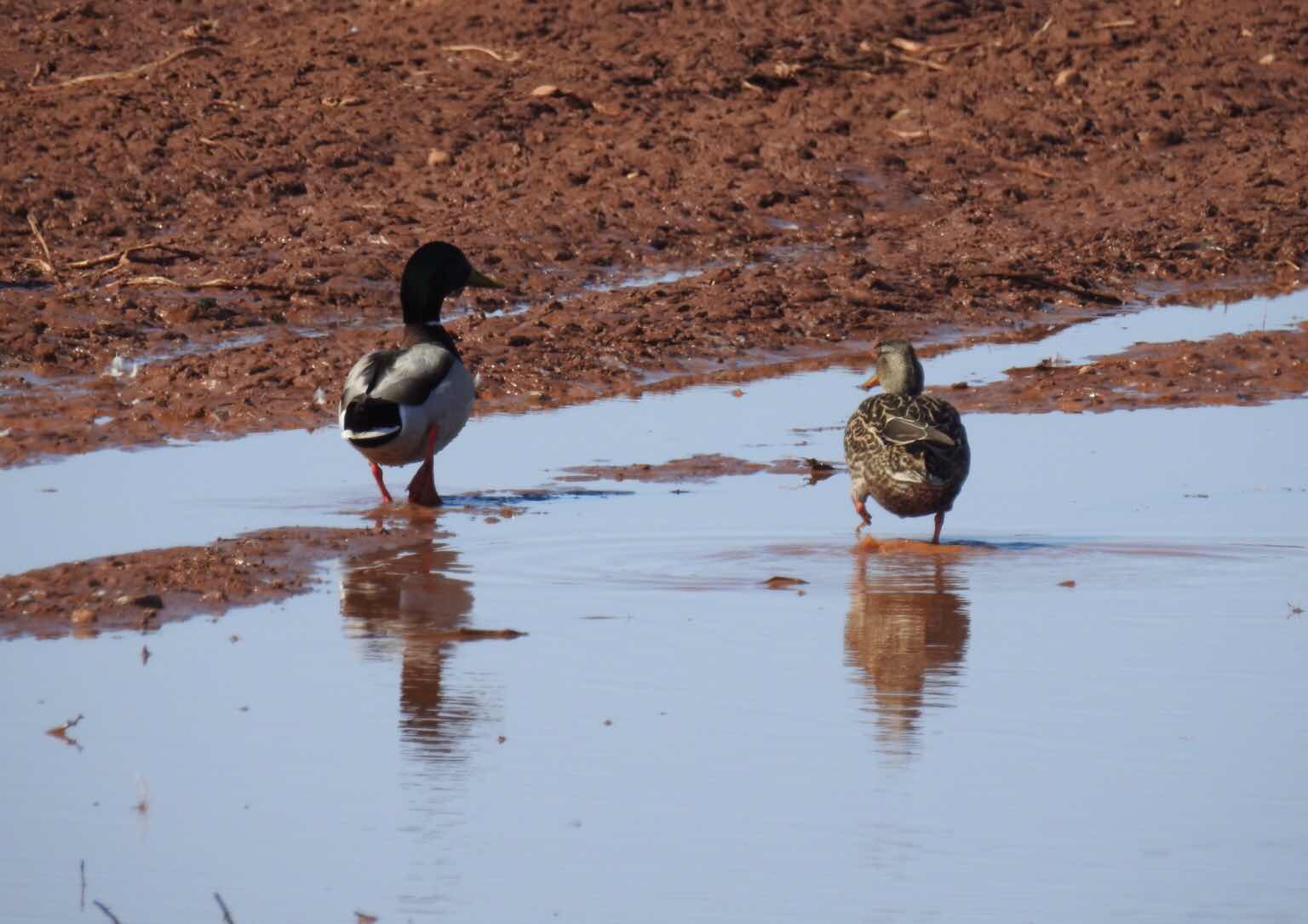 Canada geese take to the air as the car door closes. 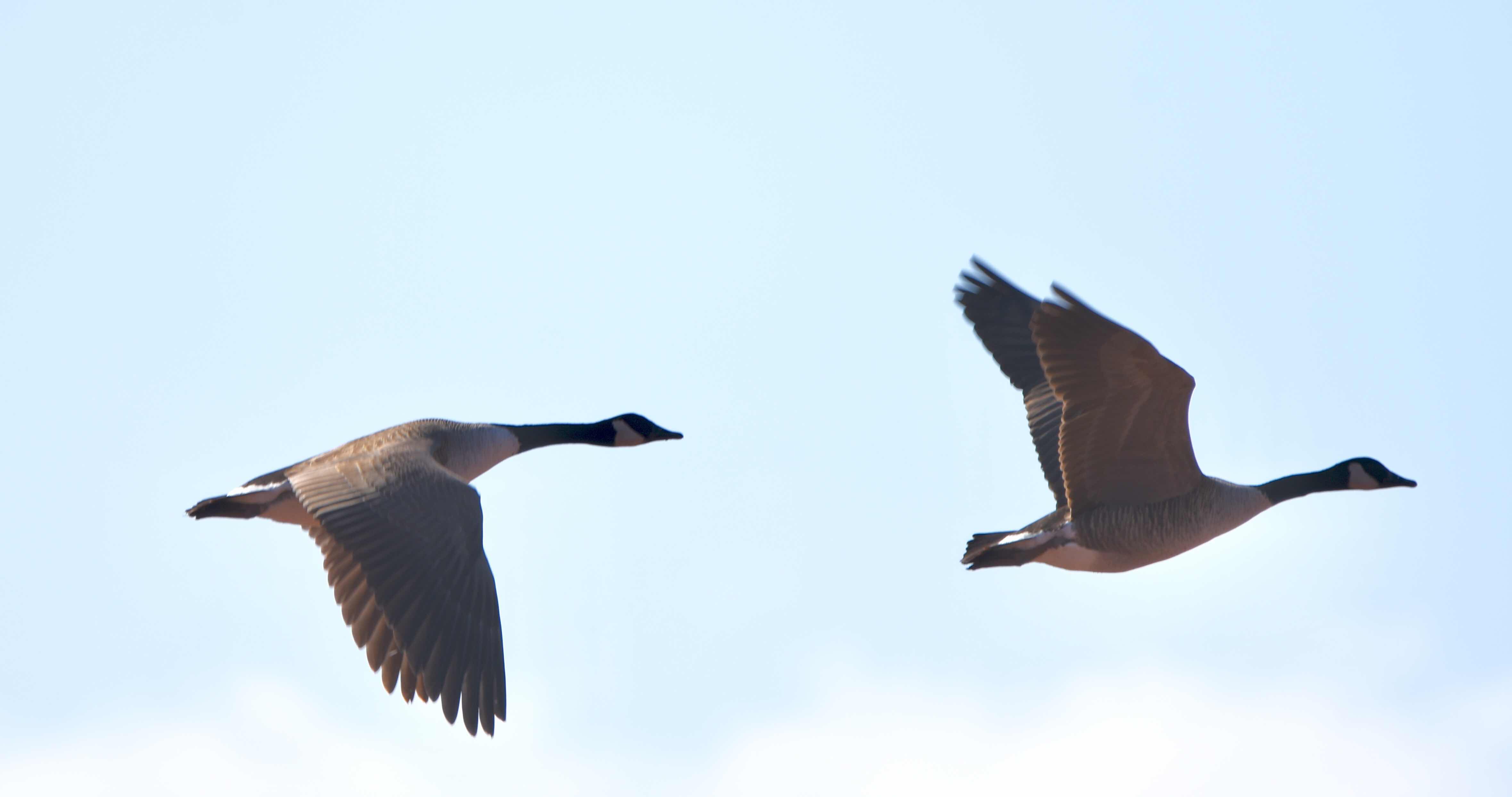 Blue herons are back. Five of them have taken up residence in a pond near Malpeque. They wade in the water and dip their beaks in to grab food. Stately creatures, their movements are slow and deliberate. 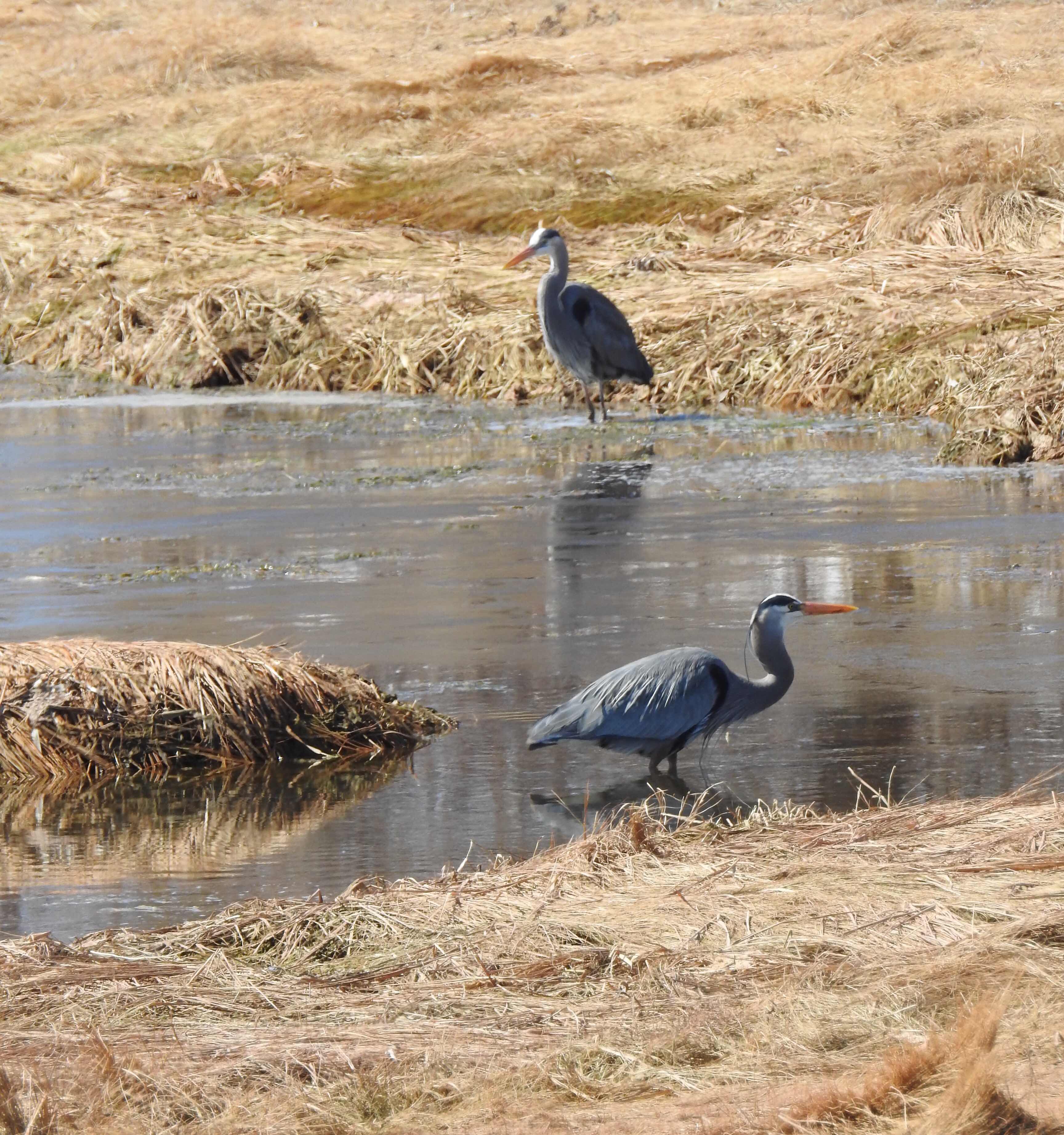 Black ducks fit in anywhere, among the geese, the mallards or the blue herons. 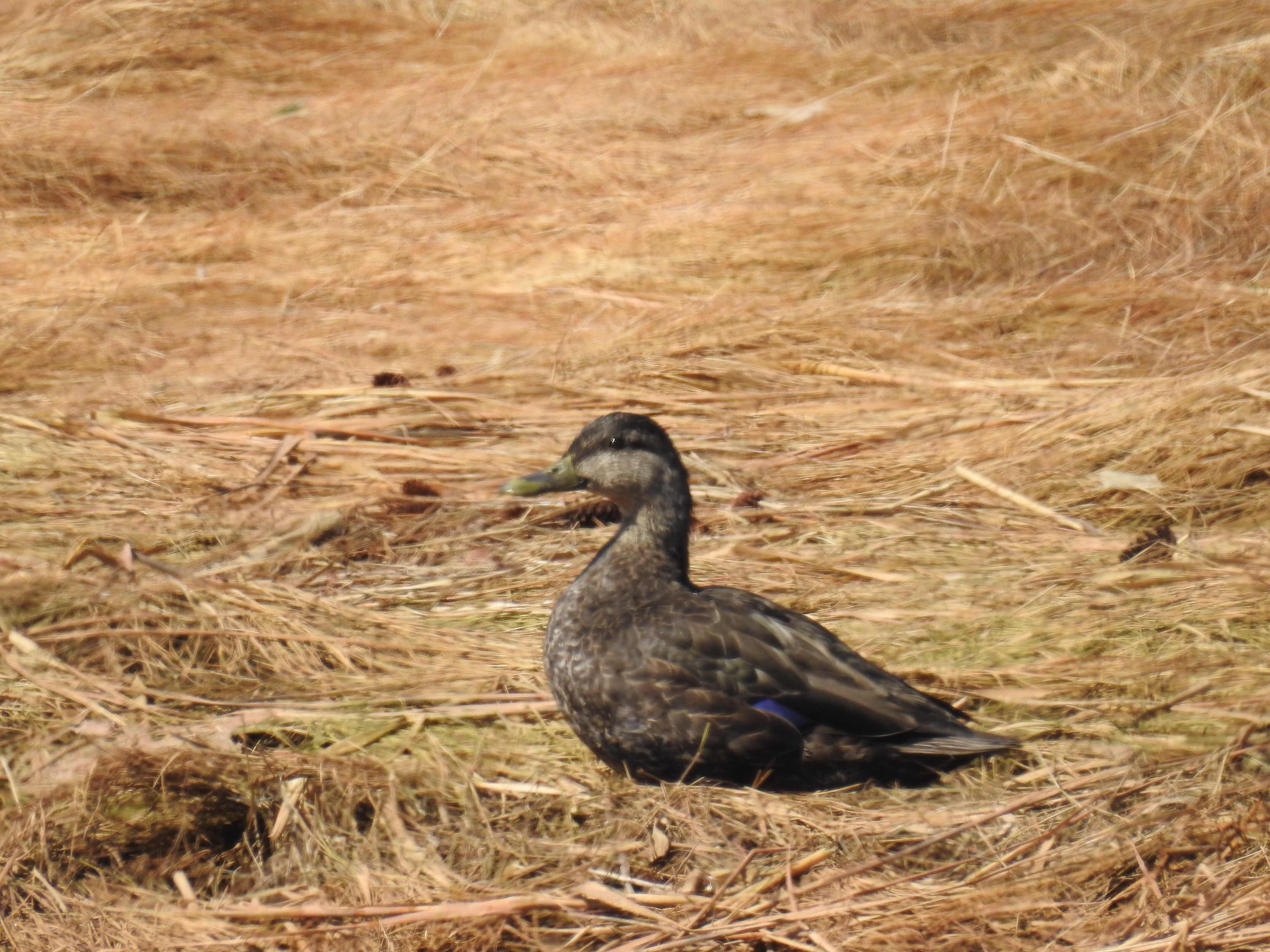 The male blackbirds are among the bulrushes again, their coloured wings obvious even at rest.

This song sparrow sings its happy notes along the trail to Cavendish Beach. 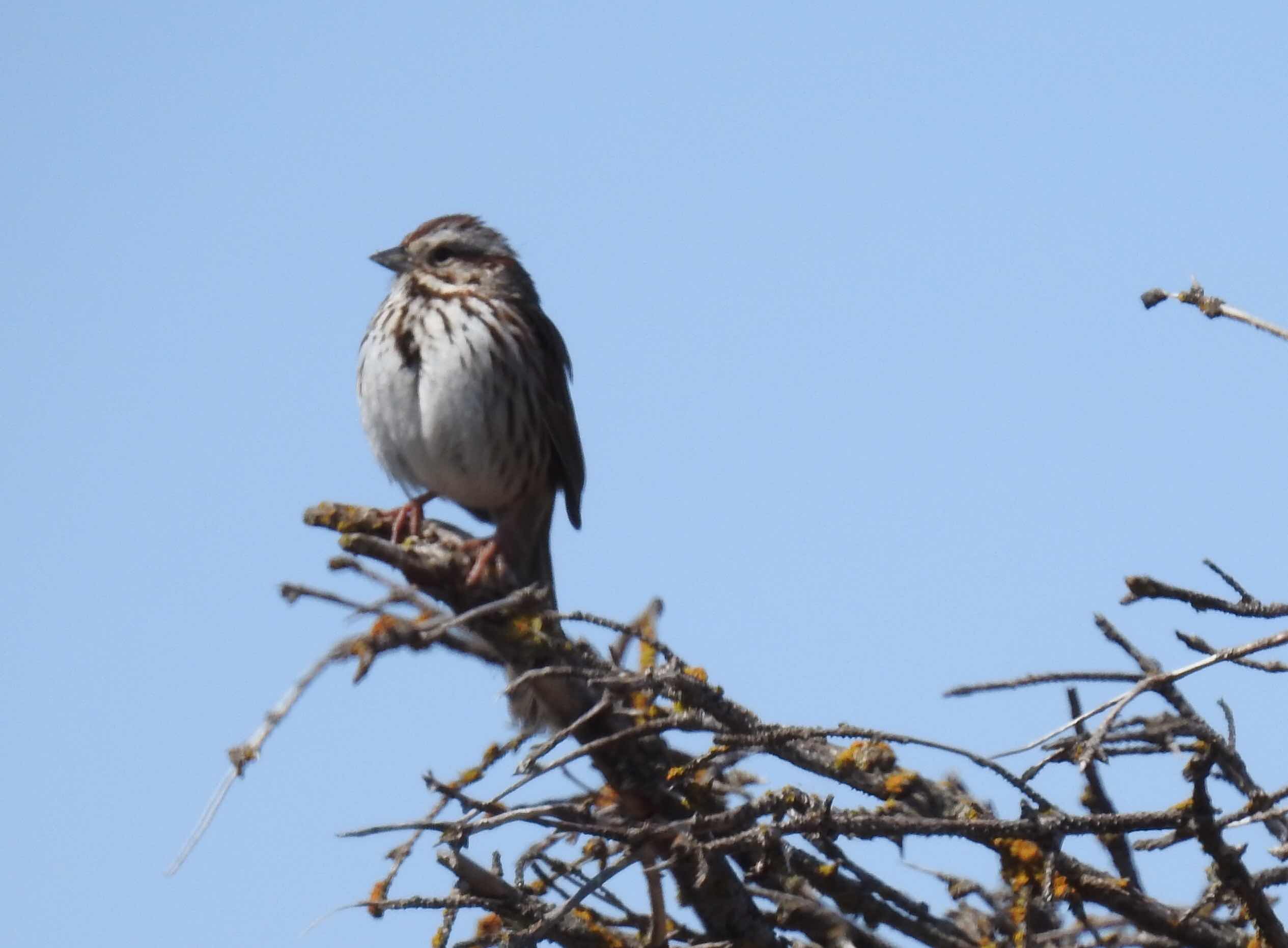 Wouldn’t it be a sad world without birds?

And you, yourselves, are early birds.

What wonderful birds you have around you! Yesterday I saw two bald eagles flying around and making their call to one another. Birds are magnificent creatures and yes, it would be a very sad world without them. Did you read "Silent Spring" by Rachel Carson? It started the environmental movement long ago. :-)

I do love a redwinged blackbird!

WoW!!! lot's of beautiful birds!! i love the herons, i was photographing one yesterday. the red winged was a real treat for me. they are in my area, often in my yard, but they never come up to the window. that's a great picture!!!

I have never seen the orange winged blackbird. Neat. Yes birds are so wonderful in our lives.

I haven't seen the herons here yet, but that doesn't mean they haven't returned yet. I have heard a blackbird's call, but didn't see where it was.

Red winged blackbirds live in the rushes in the wetlands by us, year round. We have a slew of youngsters right now. Their wings have a touch of yellow and a white bar.

The starling is scoping out the house, he wants it. Glad you can begin to enjoy your hikes and picnics once again. I love this time of the year when every thing begins to change and flowers begin to blossom.
Enjoy the weekend Marie.

It would be a very, very sad world without birds. It is just before dawn here, and the dawn chorus is just practising their lines...

Lovely Marie. I love the blue herons ... you so seldom see them in any posture but the tall regal pose so I loved seeing the one in front so at ease.

Delightful photos; I smile at the waddling ducks!
Have a nice weekend.

The song birds are slowly coming back...what a joy to hear! I just turned off my t.v. this morning so I can listen to the birds. Of course, here they are saying "it is cold"! I feel sorry for the robins hopping around trying to get worms out of the frozen ground! Andrea

We have escaped the cage for another year, AC.

I read that book in the early 70s in university. Time has not changed much as pesticides are a huge issue here and in much of North America and the rest of the world.

The females get far less attention in their brown feathers, Debra.

The blackbird was by the side of the car. I took the photo through the window, Debra. I could have touched him.

The blackbirds are such showy creatures this time of year, Barbara.

The blackbirds are loud, that’s for sure.

It must be fascinating to watch the young ones, Joanne.

We are a ways from blossoms yet but it is beginning to warm up this coming week. Have a great weekend, Bill.

The birds here are not exotic like the ones you’ve seen, Diane.

The herons are one of my favourites. They never appear to be in a hurry, Ginnie.

I love those waddlers, Mildred. They are content in a puddle.

The song birds are a special gift to humanity I think, Andrea.

Goodness, those are all so lovely. I smile as you talk about the walks, the wine on the patio, and the wonderful birds.

It's finally defrosting here and we are starting to see birds as well. You do a great job with the photography of wild life. All your photos are beautiful. The photo of the Canadian came out very special and gorgeous!! Wishing you a lovely weekend!

Some of my favourite things, Mage.

I am glad you are getting some milder weather finally, Angela. Happy spring!

It would be very sad indeed - as would a world without wine! Nice set of pictures.

Sorry its taken me so long to visit, things have been pretty hectic here!

A world without wine would be sad for sure, Stewart.

Spring is a wonderful time Marie.. I'm so glad to see things are warming up for you since I've been away, you had such a cold winter. That first barbeque is the best! The birds must be loving it too, nesting will be in full swing.

Great bird photos! Dare I say spring is here? Most of the snow here is melted and we BBQ'd last week!!

The birds are loving spring as are we, PDP.

There is ice offshore still and lots of snow in places, Jenn.

Great shots of your winged friends!

Thanks Jenny. I love birds!