North shore coastal communities on Prince Edward Island are a flurry of activity these days as fishers prepare for the lobster season. During our recent visit to Northport, we stopped at the wharf where fishers have been busy preparing their lobster traps. 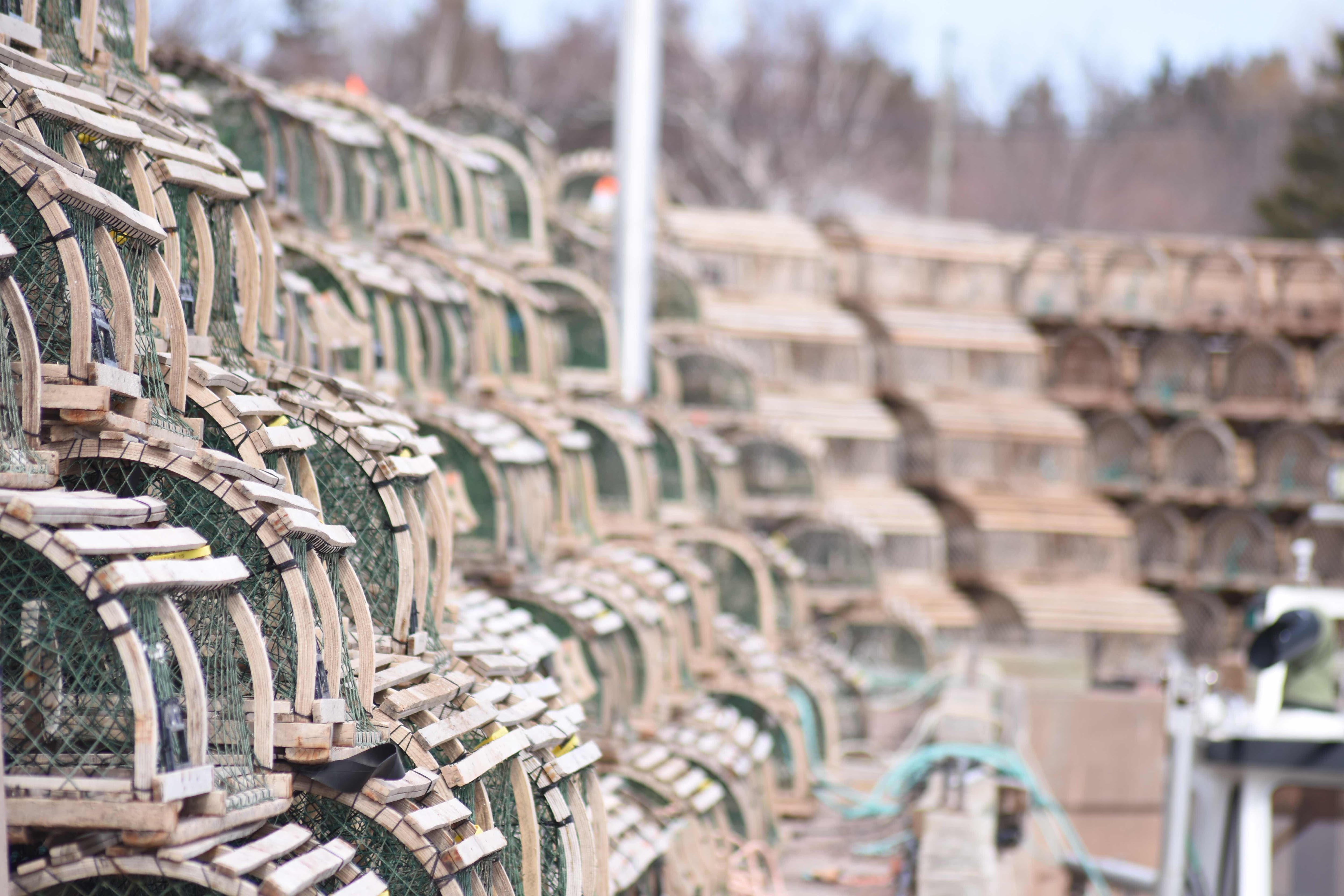 The wharf was lined with the traps and buoys; everything looks ready to go. 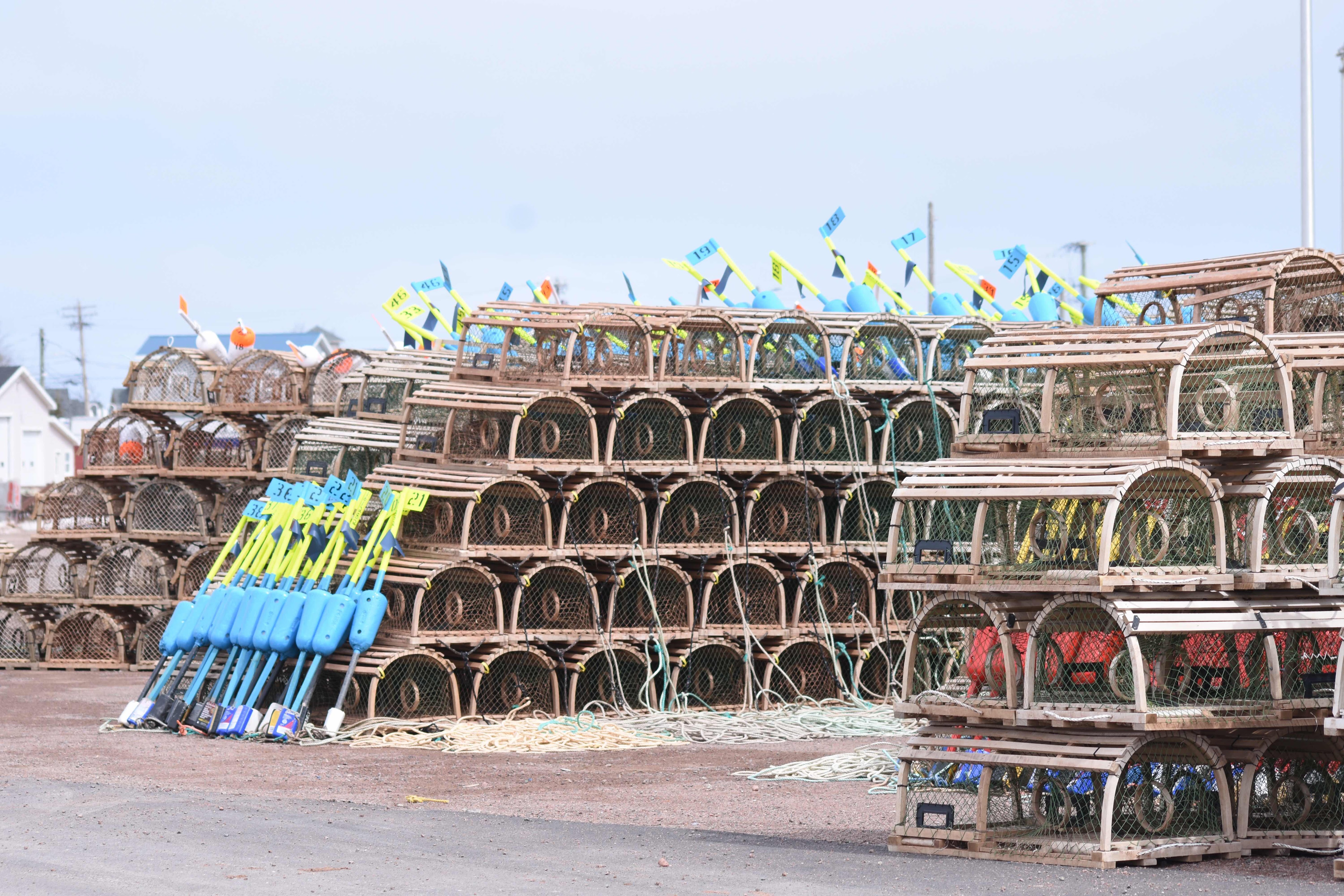 The traps sink in the water because of two concrete slabs held in place at the bottom of the cage. 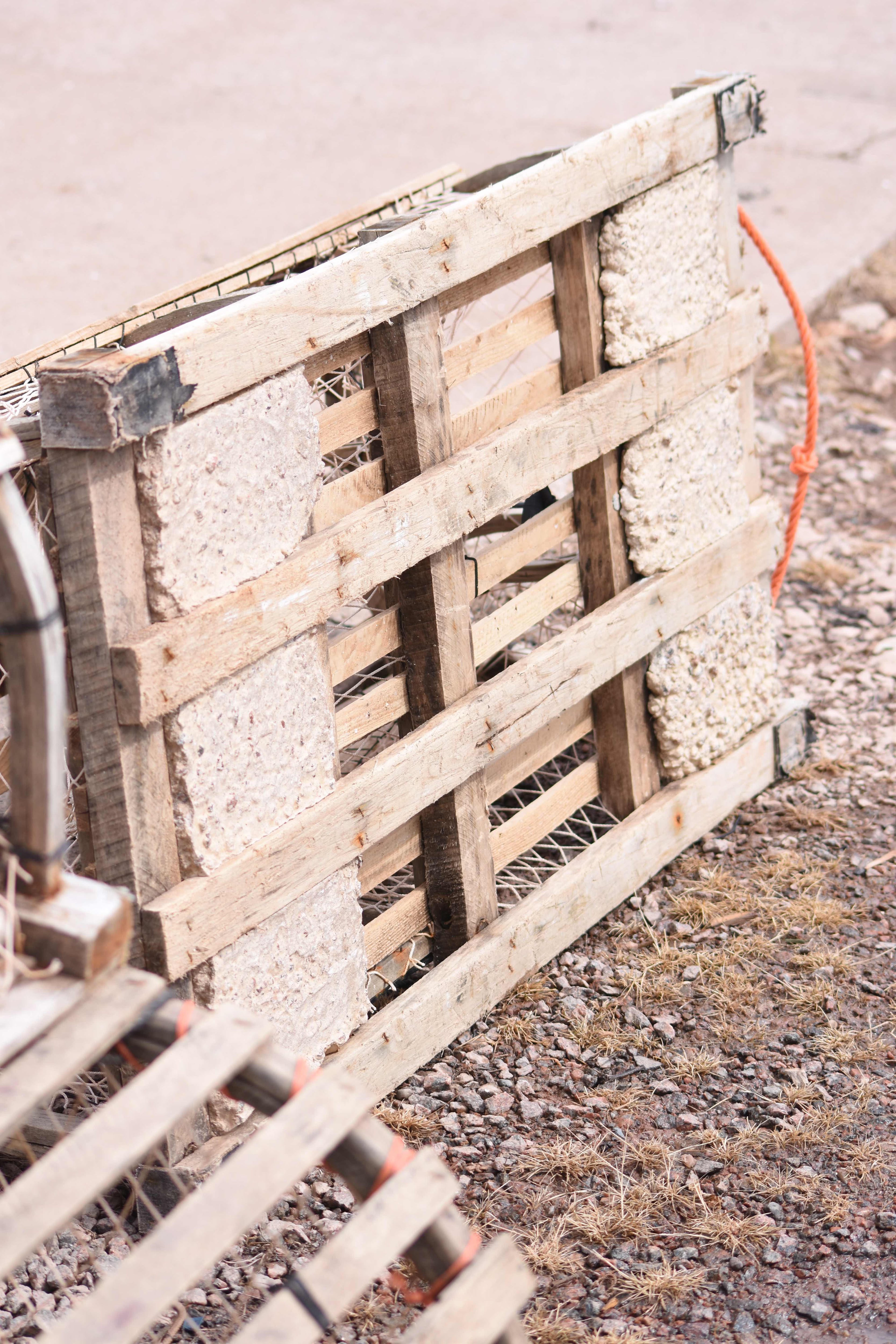 A boat with its traps loaded aboard at the beginning of the season lies low in the water, as we saw last April on setting day, the first day of the season. 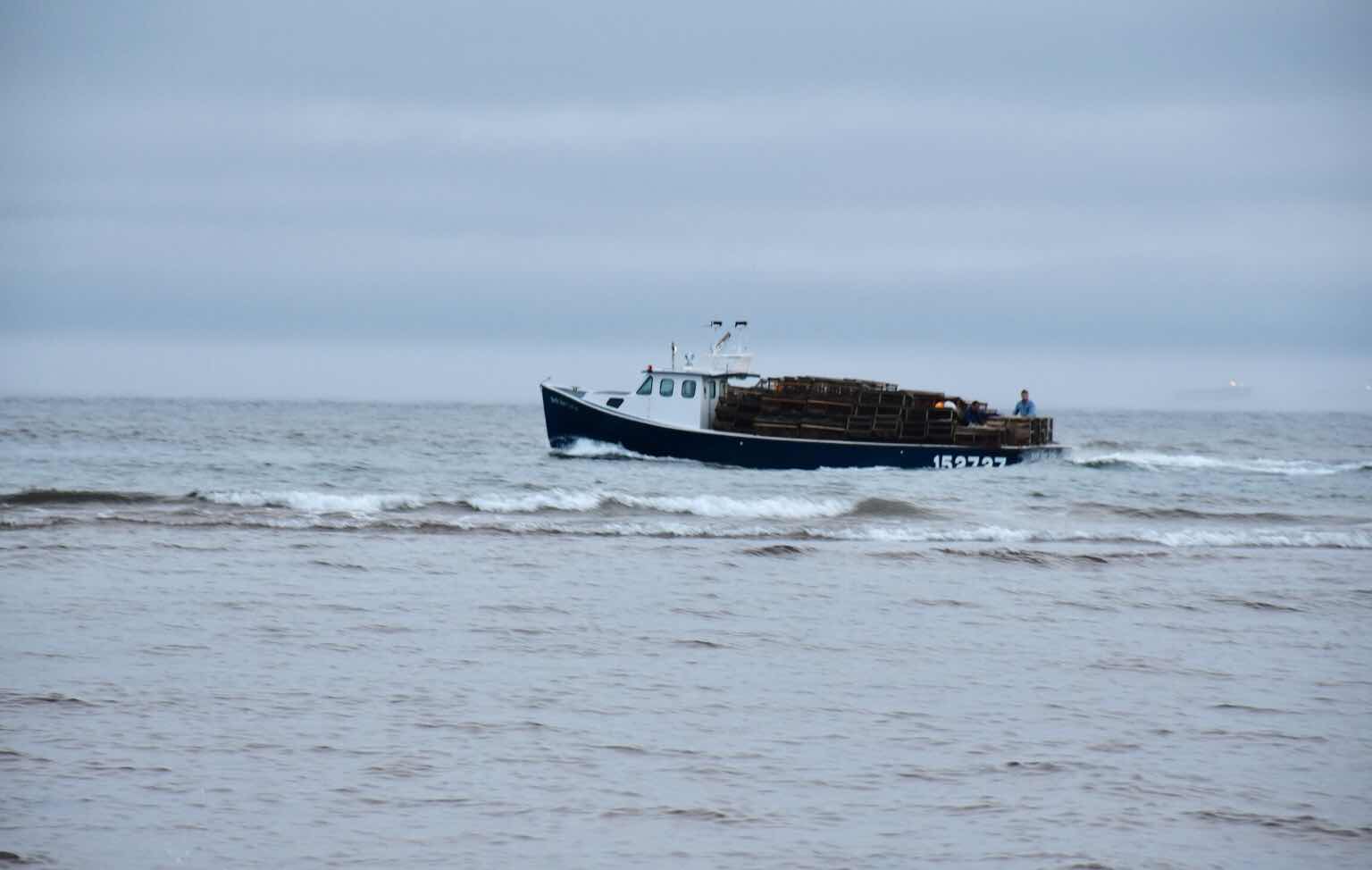 The ice is offshore but remnants linger in the boat pond inside the breakwater/wharf. 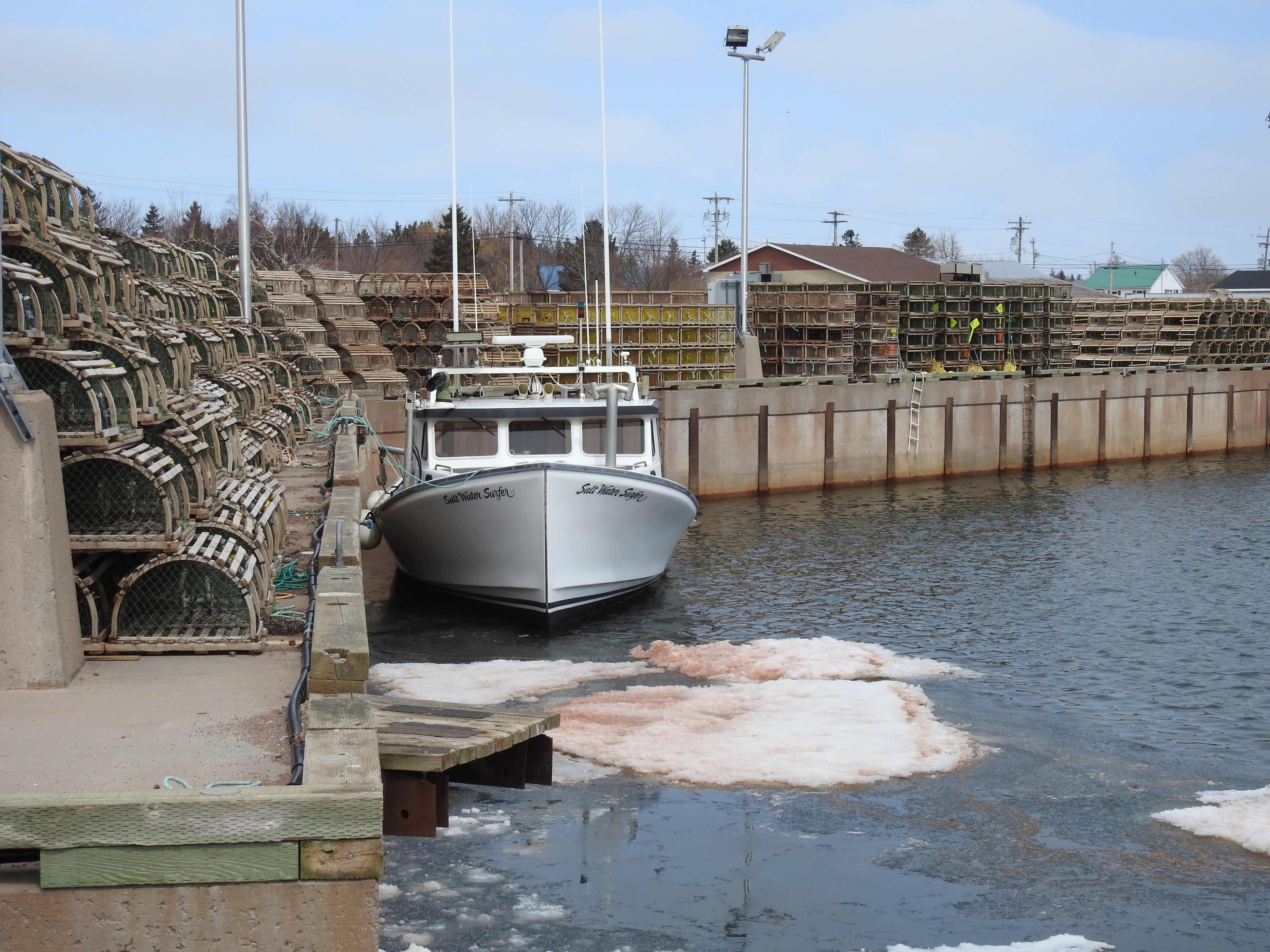 Here, the boats are slowly being returned after the winter ashore. Google maps shows the pond inside the unusual wharf, middle left. 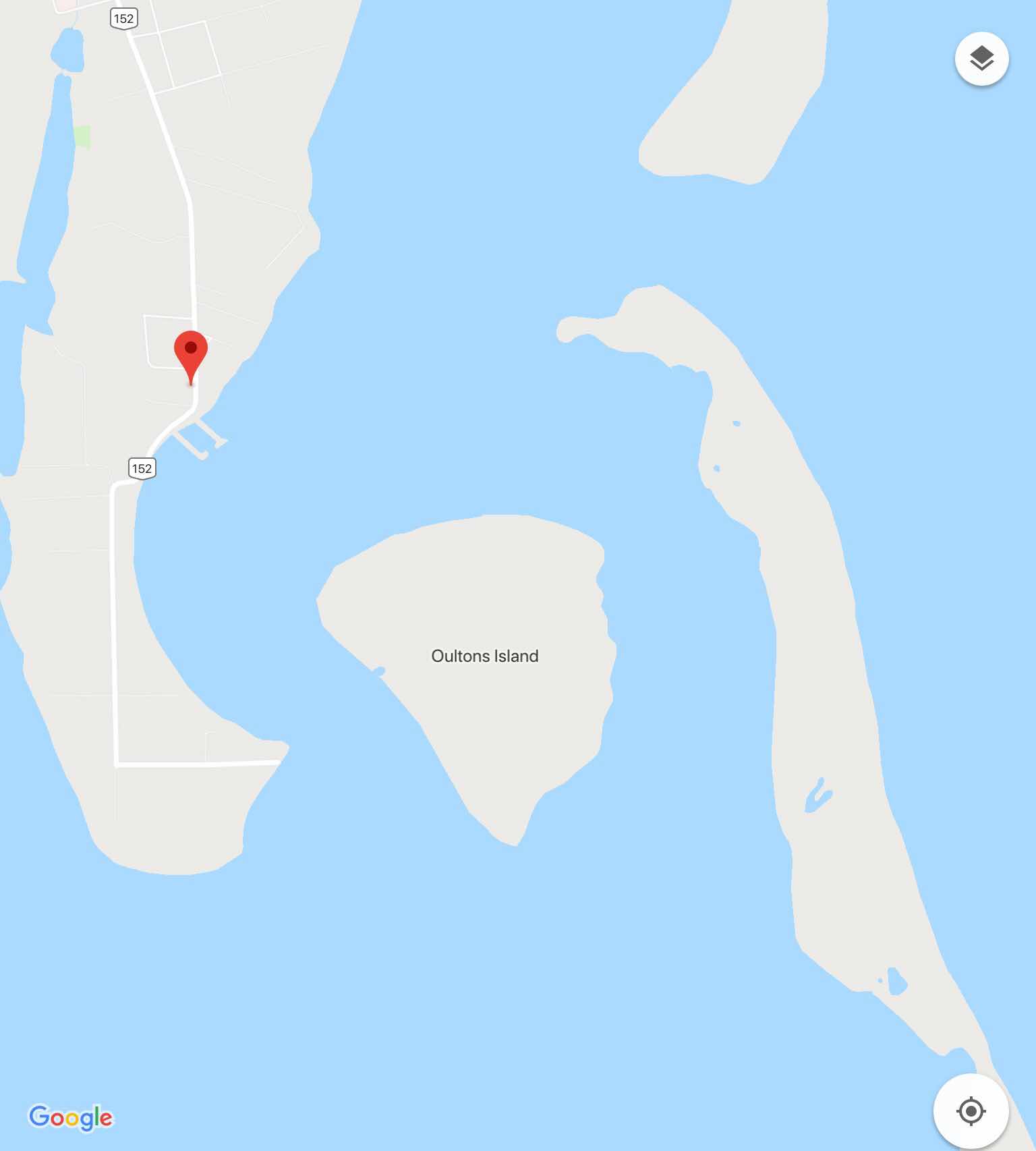 On an island off-shore, the former Cascumpec lighthouse still stands. It has been decommissioned and is privately owned today. 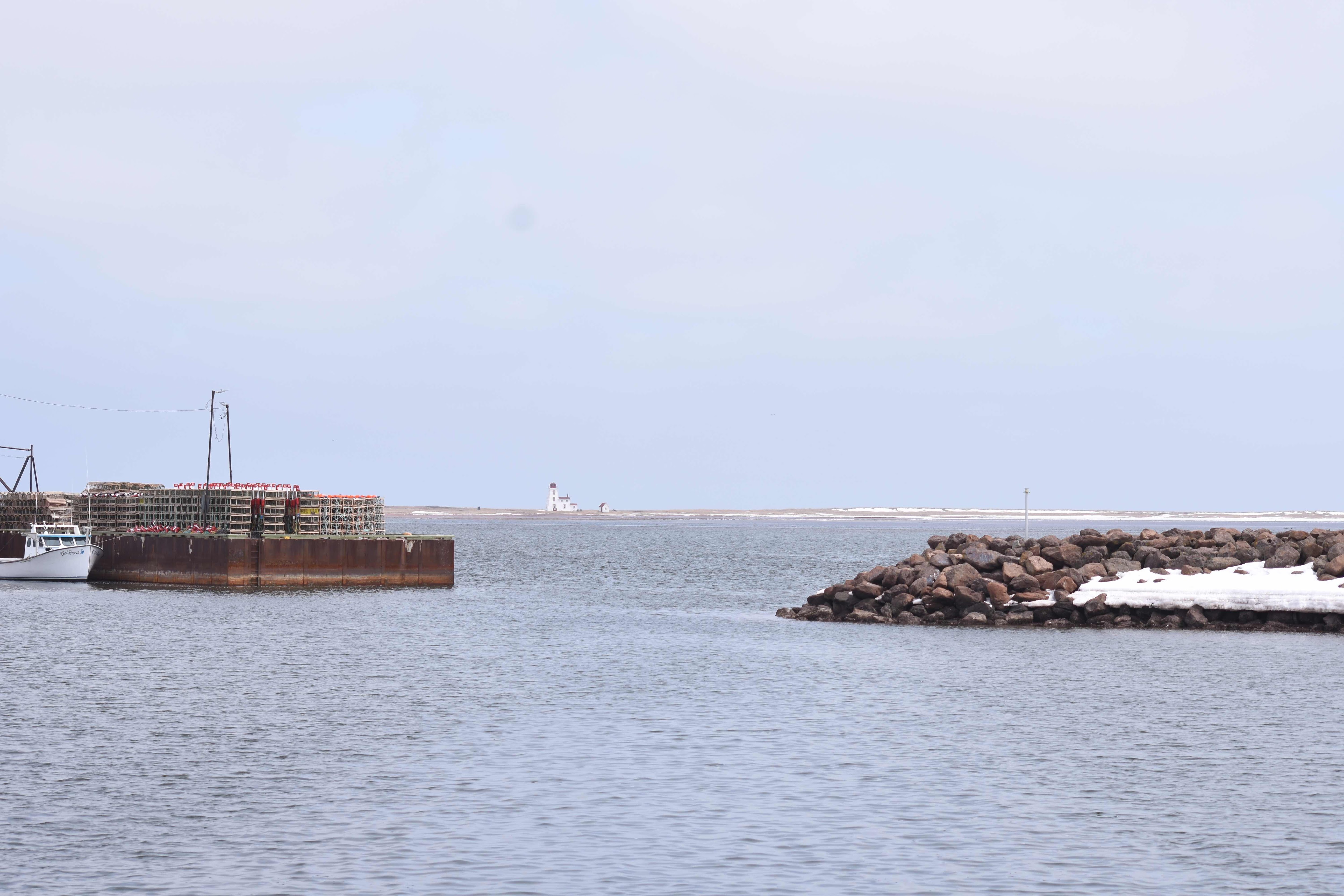 On shore, near the wharf is the range light which still guides boaters home. 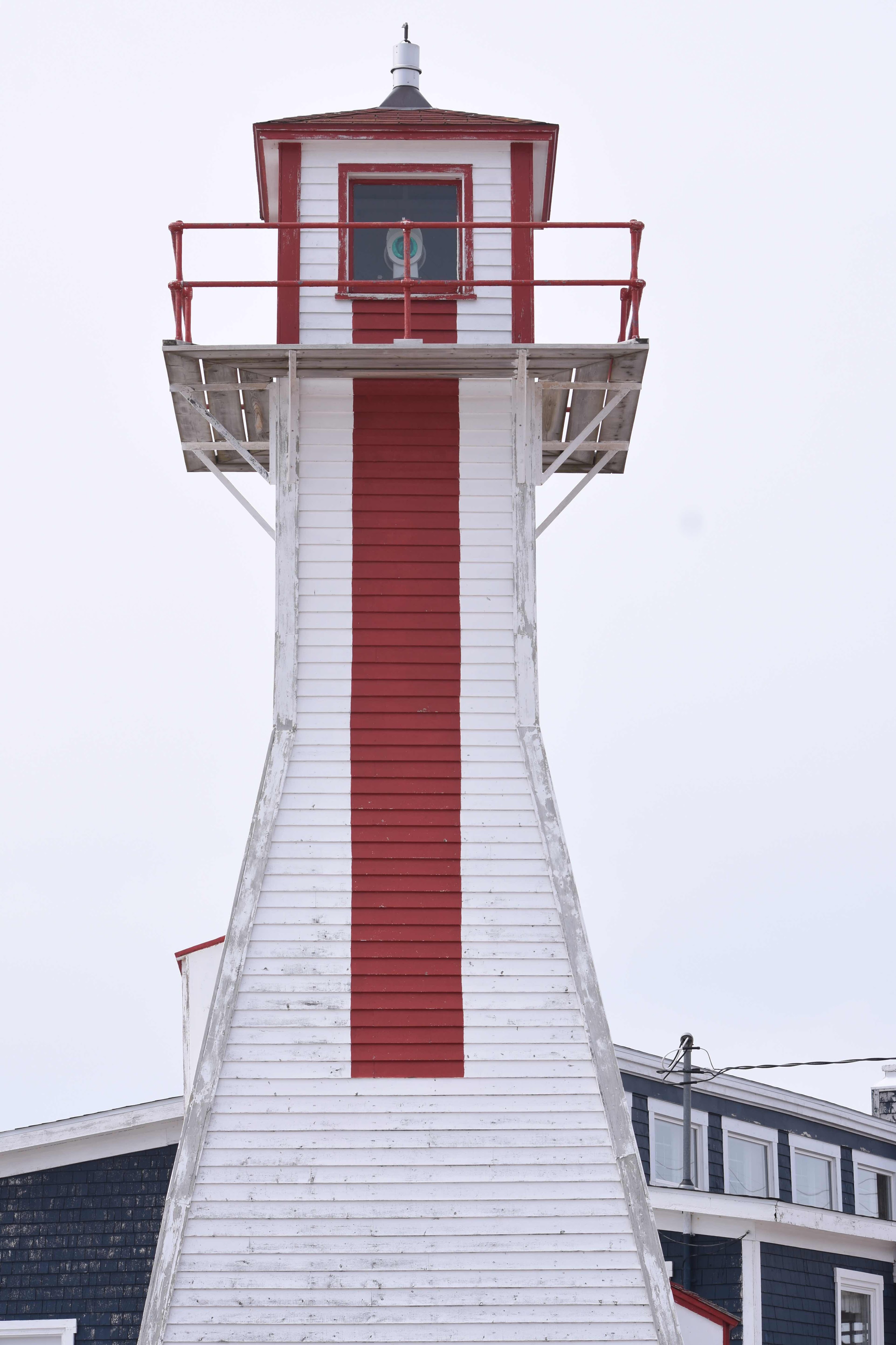 Next week it will be an important part of the life of the community.

Lovely to see what other communities do 🙂

There's something about harbours, boats and fishing that I find irresistible. But clearly no place to be a lobster!

Wow, Marie, it's a huge industry. I've learned so much from you about this particular kind of fishing (do you call it fishing when you use traps instead of lines?). Do you like lobster yourself?

Gosh so many lobster pots Marie, must be a huge industry! I would love to privately own that lighthouse, it's gorgeous ☺

I find this so interesting and enjoy the photos so much. Enjoy your day.

Lobster lovers everywhere are salivating and getting the butter ready.

If we had a boat pond here, it would still have ice, too. I wish all your fishermen a safe and plentiful season.

A delightful picture you paint today. Thank you. Here our traps are square. Yours are more picturesque.

these images are so awesome and as i often say, they remind me of my area. beautiful lighthouse, an odd shape for this area!!

They're geared up for sure.

I love that lighthouse, very nice indeed. Lobster season once again comes around. I assume they will get a big sendoff when they head out.

Shame poor lobsters. I hope they breed more than they actuallly bring in. Great photos, Diane

This is fascinating. Thank you. And how I would love to own/live in a lighthouse.

Great photos! The piles of lobster traps make for an interesting photo!

Sounds like the year 'proper' is about to begin.

I remember those lobster traps. It was a new experience for me since I had never seen them before I visited P.E.I. so many years ago.

I love these scenes John. Lobsters beware however.

We call it a fishery Jan.

We love lobsters. Our first meal for the year is on Mother’s Day, just a few weeks after the season opens. Our youngest grandchild will try lobster this year. The older two love them. We have lobster several times a year. This past year we had them on Christmas Eve. They are available year round here.

That lighthouse is a beauty, PDP.

Thanks Mildred. I love these scenes of the preparation for the fishery.

We are having lobster for Mother’s Day, Debra.

The fishery is such a dangerous occupation, Joanne. Thank you for your comments.

I have seen square traps but they are not as common, Mage.

It is visible through the break, William.

The lighthouses here are different shapes from those in Newfoundland too, Debbie.

They sure are AC and this is just one location.

Family and friends will give them a good send-off, Bill.

The stock is well regulated, Diane.

There is a lighthouse here which is a hotel, EC. There is one is Newfoundland, only accessible by boat where I’d love to visit and stay for a few days. It would be my dream vacation.

There are thousands on each wharf these days, Jenn.

It is a huge industry for this island, Cathy.

I love these scenes, Catarina. They are a huge part of island life.

Did someone say L O B S T E R?! OMG. I would love this seasonal rite of passage, Marie. My big question: Can you buy lobster there for a decent price or...like most other places...is it pricey? It's almost too rich for me (which is why I prefer crab legs), but every once in awhile would be a delight!

Mmm, lobster! So yummy! The light range is so pretty. I enjoy all of your island pictures. I live in the mountains, but love the beach, so I always enjoy your pictures.

Marie, in all the years I've seen piles of lobster traps here, I never knew they were weighted down! I'm kind of flabbergasted at that :) I thought the traps would sink under their own weight. You learn something new every day, if you're paying attention :D

We get six lobsters, one and a half pounds each for $70+. We think it is a fair price. That was last year. We don’t know the price for this year.

It is a dangerous occupation for sure, Tabor.

Thank you, Danielle. I love the mountains. You are lucky to live there.

THere is always something new to learn. It keeps us young, Jenny.