There has been a church in this spot since 1812 on Prince Edward Island. This is the third building, here since 1898. Known as Notre Dame du Mont Carmel, this church is an islander, made of red brick from the island. 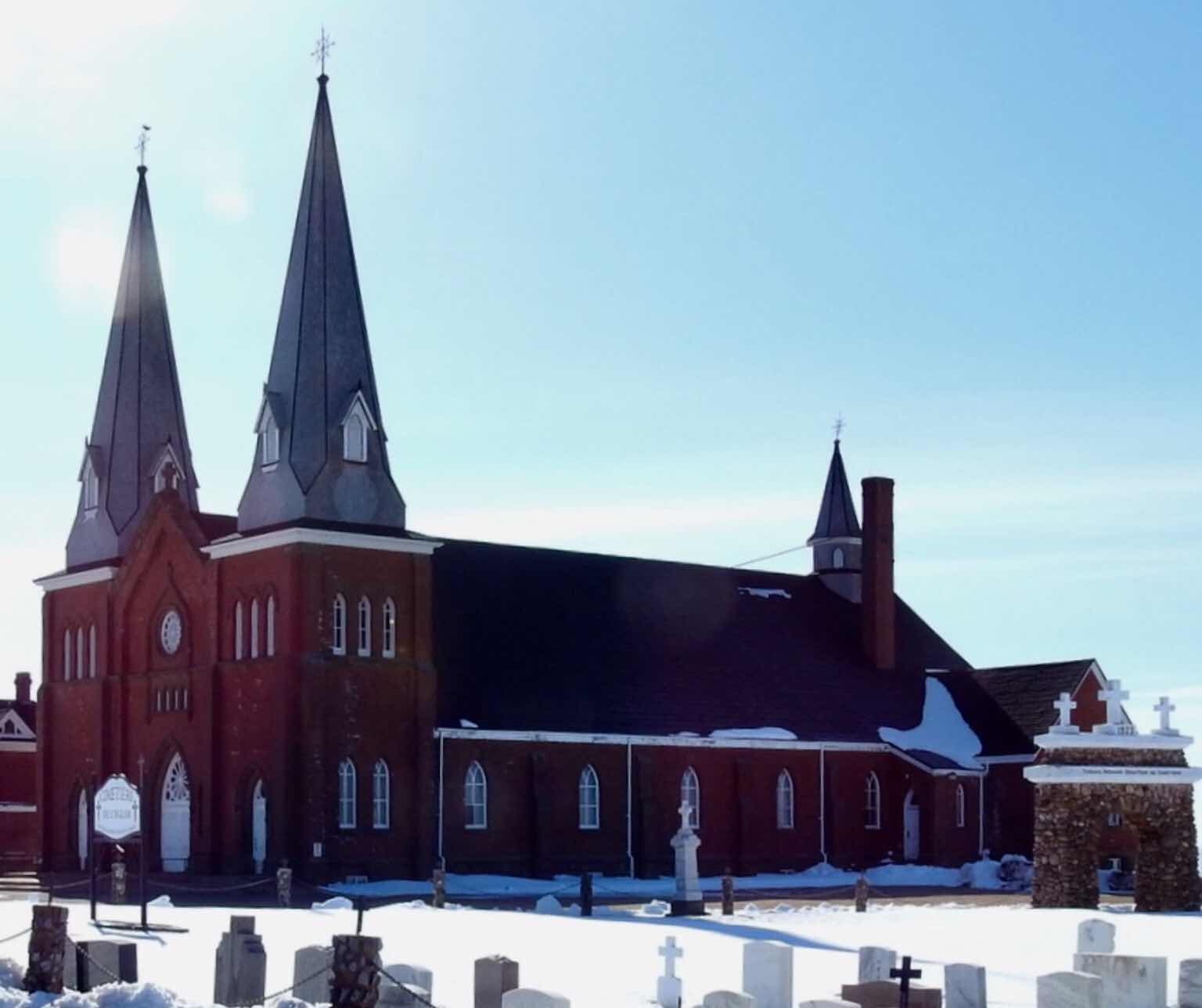 The catholic church sits in the Evangeline region of Prince county, home to many Acadians. It was designed by Rene Lemay, an architect and son of Pamphile Lemay who translated the epic poem, “Evangeline,” by H. W. Longfellow into French, in 1865, almost twenty years after it was written.

The church is on the coast in Mont Carmel, behind a stone archway. The Northumberland Strait in the background was frozen when we visited. 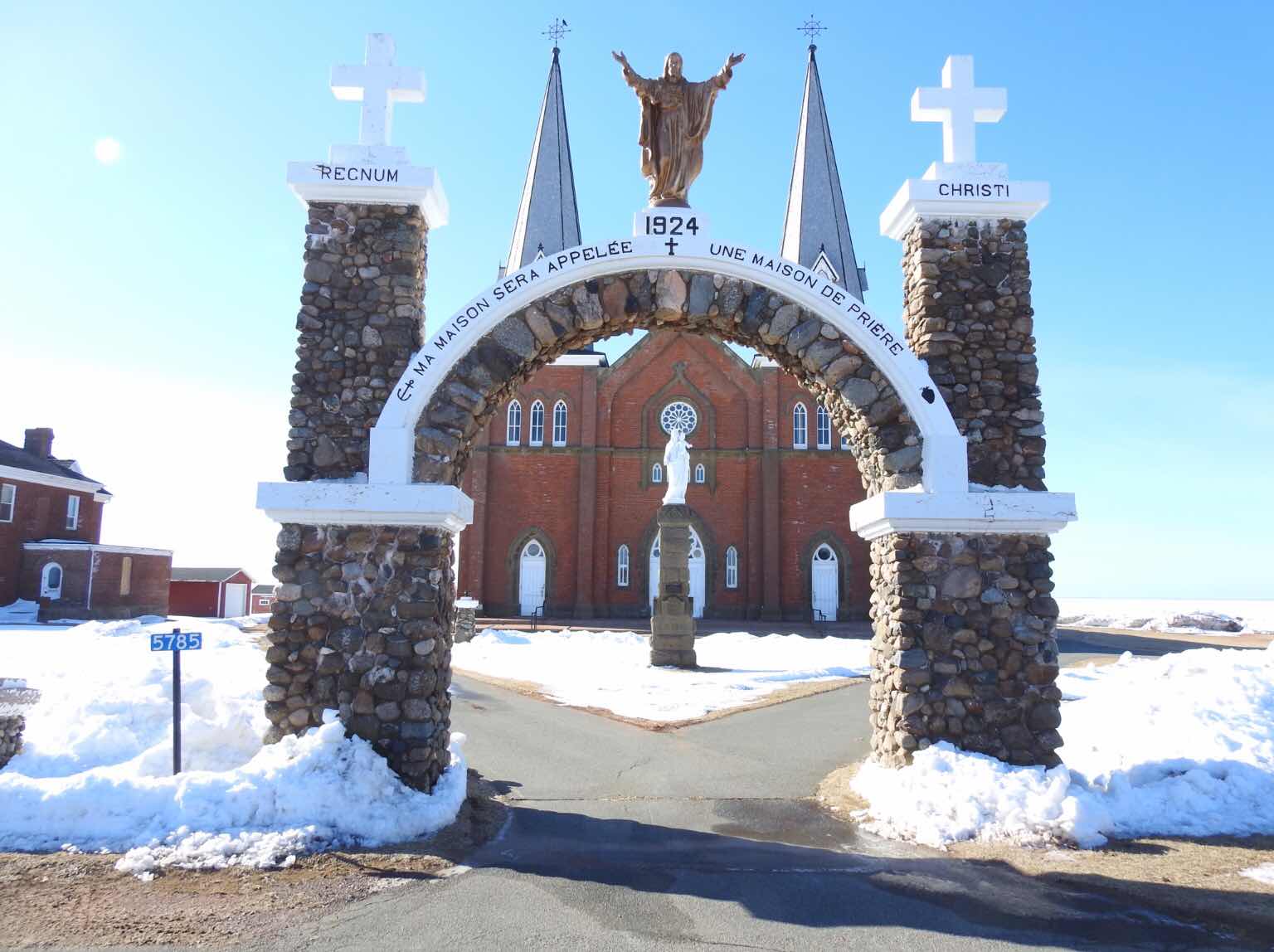 There are two bell towers at the front of the Victorian era building and the traceried windows are inspired by Gothic design. 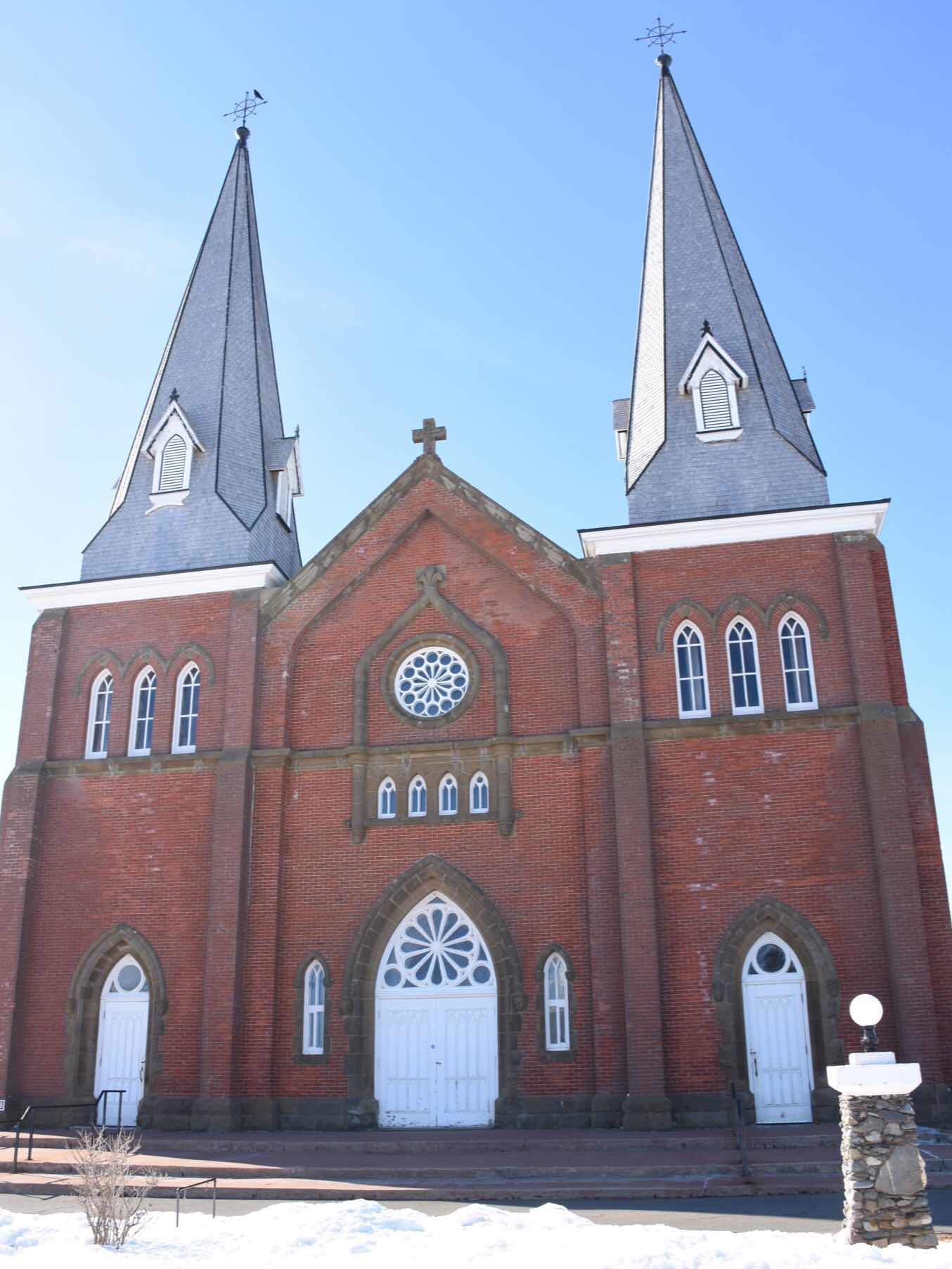 The statue of Mother Mary and Child Jesus is prominent inside the archway. 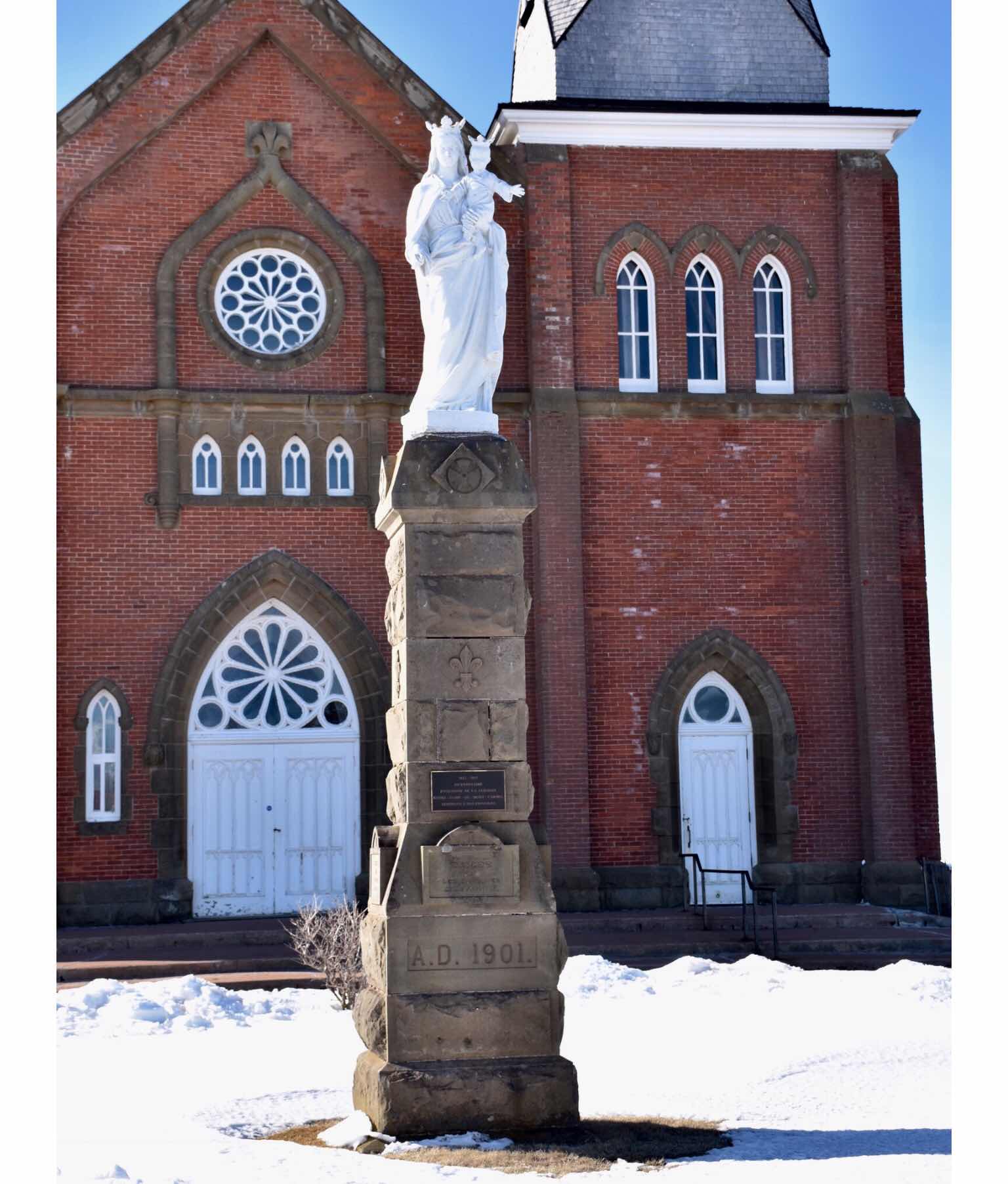 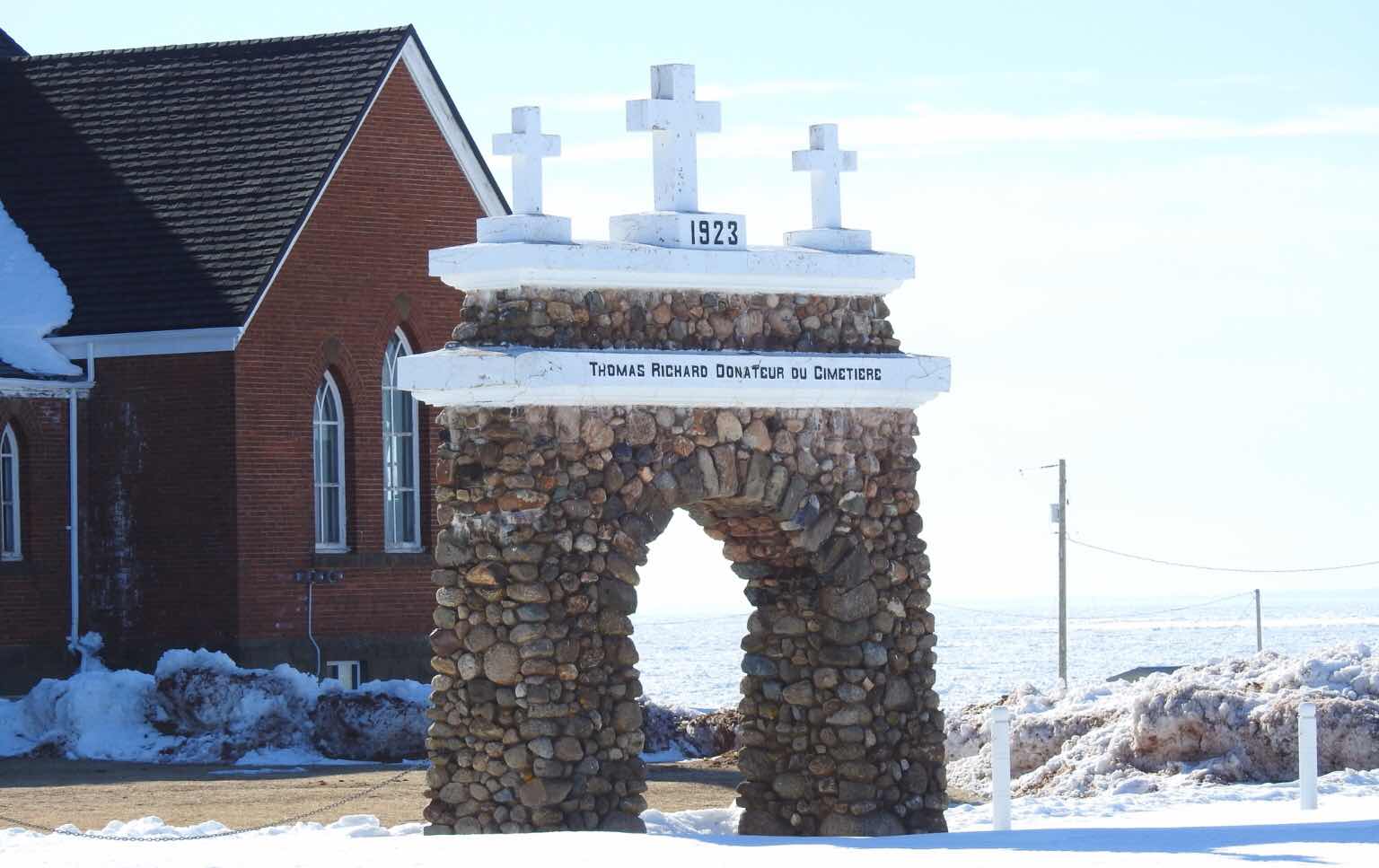 and one from the roadway. Inside the cemetery is a stone mausoleum. 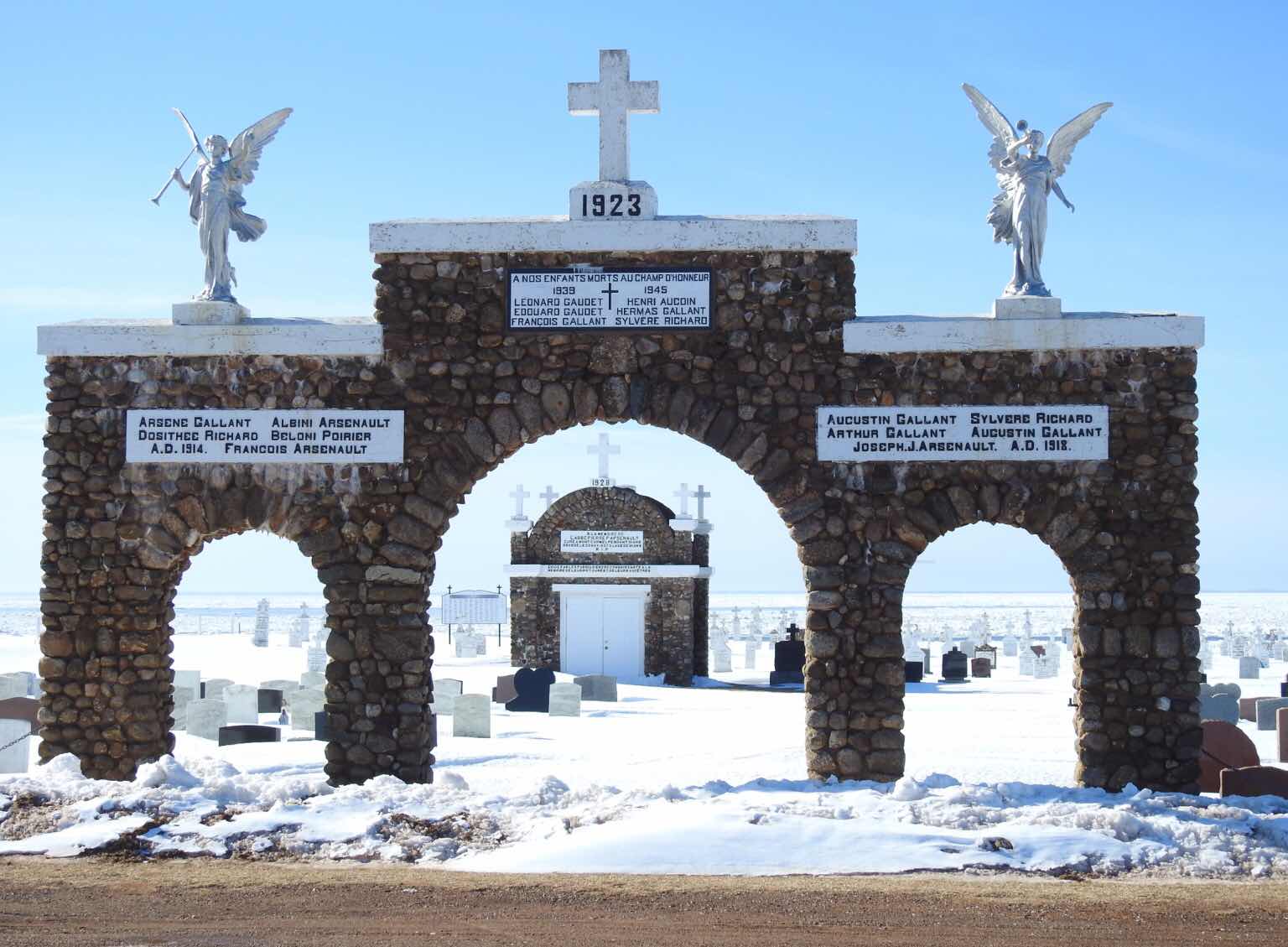 The archways amaze me, not only for their grand design and craftsmanship, use of natural elements and positioning. Rocks such as these are a rare commodity on the island. It is common for garden centers to sell rocks. For the construction of breakwaters and causeways, rocks are brought in from other provinces. We have never seen rocks such as those in the archways.
The exterior beauty of this church makes us want to see the inside again.
Next time.

This was a bit surprising to me as I have never associated Catholicism with PEI, but of course they were/are there too. My impression from my brief trip there is a small white churches.

Your photos are wonderful. The rocks in the archways are amazing.

It seems odd that rocks are so scarce that they are for sale. That does make those arches fascinating. It's a very beautiful place, in any event. :-)

A beautiful church. Now that I think of it, I don't remember visiting churches when I went to PEI, and I like doing that when I travel to new places. Next time.
:)

it is a beautiful church, looking pretty in snow!! interesting information about rocks on the island, i would not have thought of that aspect!! it is a grand entrance!!!

I really enjoyed these moments with the church. Brick and stone...what an interesting contrast.

A beautiful church! I've seen it once.

Would love to enter that one. I can’t wait for the next trip. I enjoy the history too.

That is indeed a beautiful church!

Curious - they seem to have gone to more trouble to build the arches than for the church itself, for which bricks were considered quite adequate. We have a shortage of building stone in Cambridgeshire too, which means that all the stone for the Cambridge colleges had to be transported around fifty miles, some from further still.

Love those shots through the arches.
It is indeed a lovely church.

To me that is the perfect church and it looks right. I dislike the odd shapes of some of the new churches. Great post. Diane

Thanks for the history lesson along with the pictures, Marie. It is indeed a very unusual church and not at all what I would expect to see on Prince Edward Island.

I love the stone archways. Very attractive to my eye. I'm looking forward to your shots of the church interior; I wonder if it will be fancy or plain?

Great post! Gorgeous architecture!! Indeed must be great to see the inside!

This red brick one is exceptional, AC, from what I’ve seen.

They are indeed, Mildred.

We looked for three years for a rock to stabilize a clothesline pole, Jan. We refused to buy one!

It is strange to me, too, Debbie, a woman who came from a place known affectionately as The Rock.

It is indeed, Mage.

The setting certainly adds to it too, William.

I plan to visit again, Linda.

The setting adds to it, Debra.

The church was made with island brick which makes it unique, John. Unlike much of the red sandstone, this brick has stood the test of time.

I love the blue towers too, Ec.

Thanks, Diane. I love this church in the setting. It’s perfect.

It is made of the elements of the island, Ginnie.

I do too, Barbara.

It is perfect in the setting, Angela.

The outside is pretty. Very nicely built.

It looks great in that setting, HW.

Such a beautiful church, I love brickwork.