We hadn’t seen it before. On a recent drive through the French region of the island, we spotted a man working at the taps on his maple trees. My husband and I stopped there on the way home to take some photos. By this time, the man was gone so we couldn’t ask any questions. 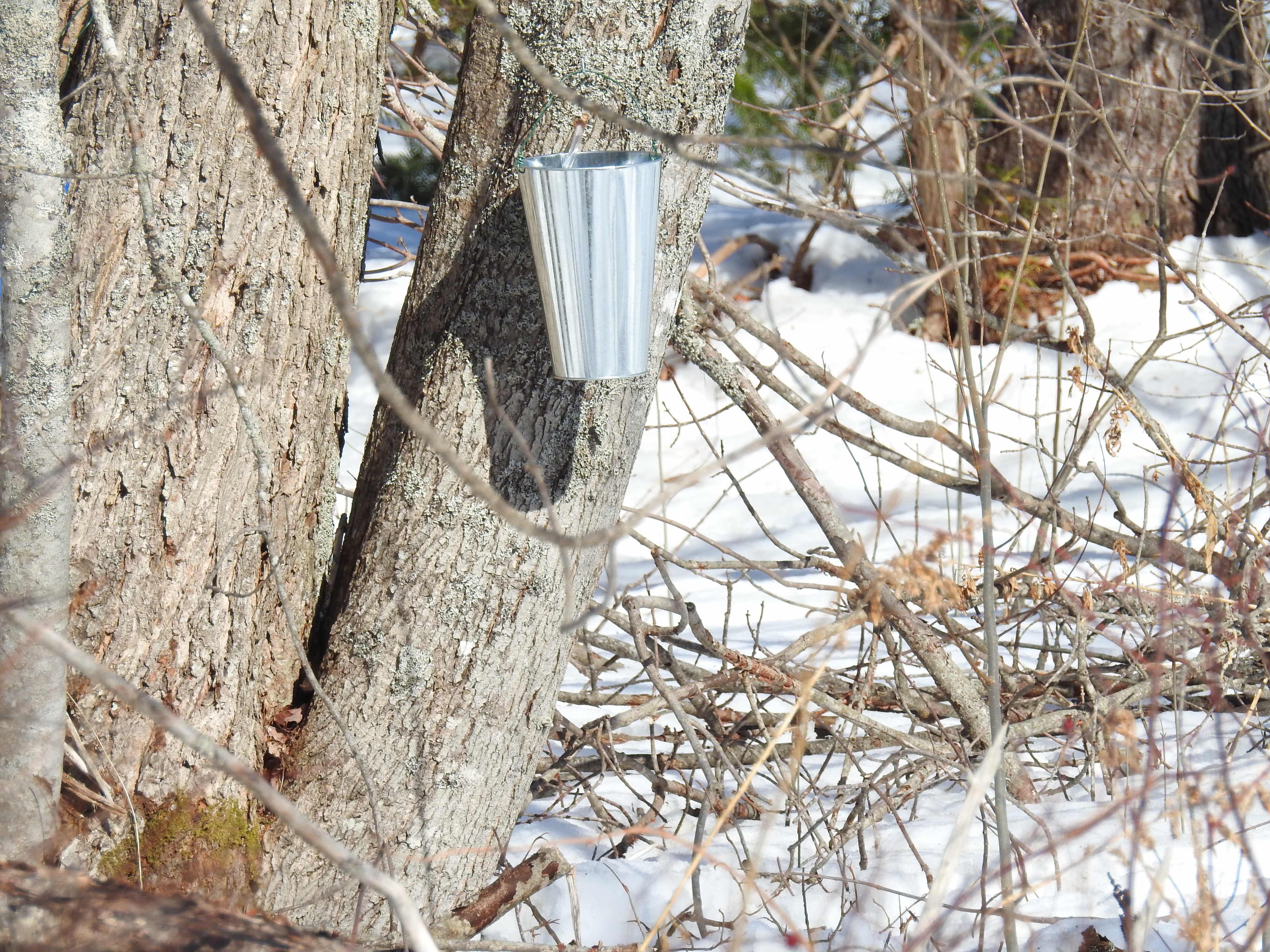 Prince Edward Island doesn’t have many huge stands of maples. There are only four producers listed for the island this year, producing about 10% of the maple syrup used here.

However there are a number of small family maple syrup operations such as the one we saw. We were interested to see the taps collecting the maple sap. There were a number of trees around the property with active taps that day. The trees in front of the house had four taps, one on the back side of a trunk. 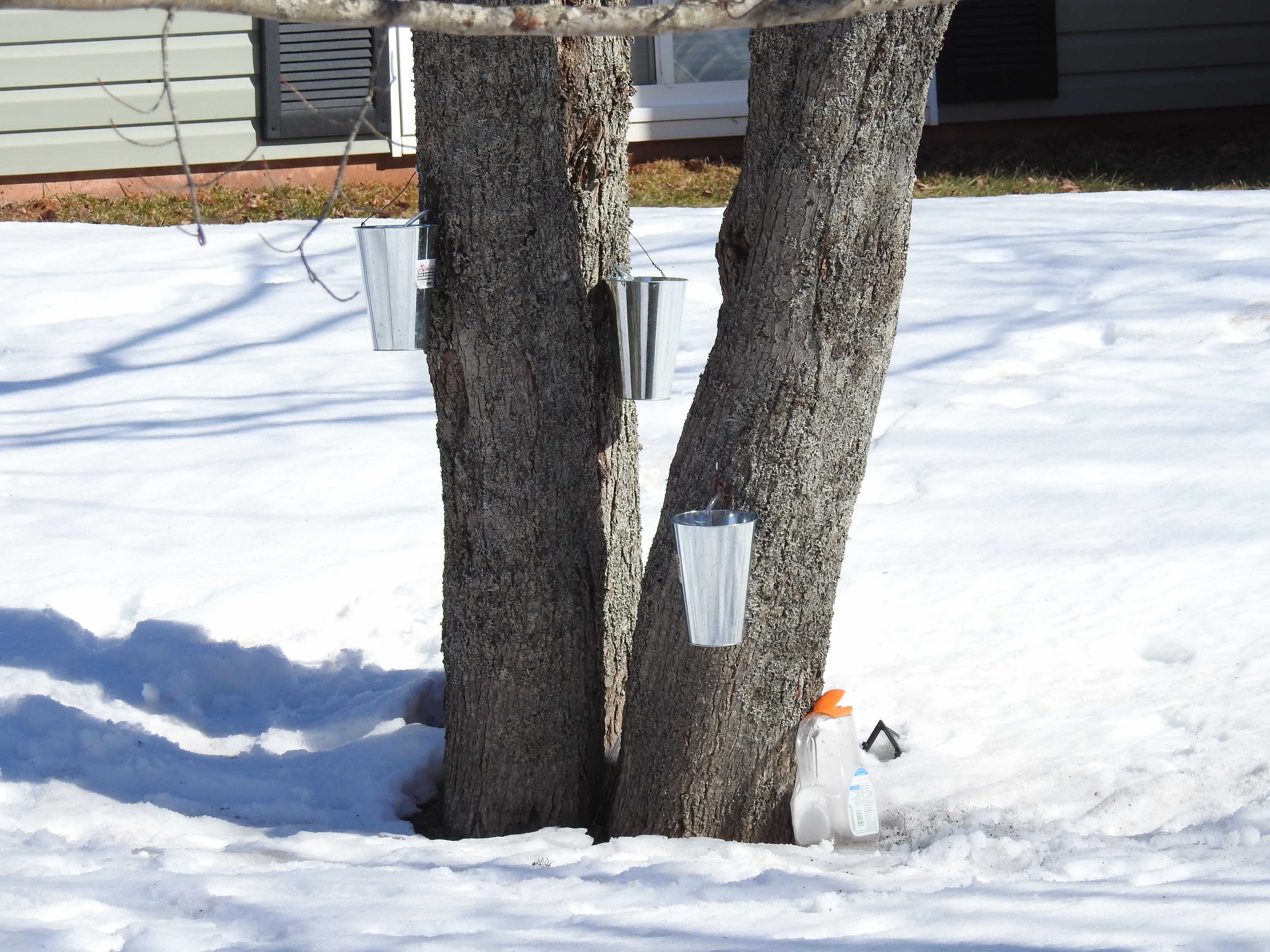 We will look for some of the island’s maple products this year.

Posted by Marie Smith at 04:19
Email ThisBlogThis!Share to TwitterShare to FacebookShare to Pinterest
Labels: maple syrup

The old way of collecting sap in shiny new buckets.

How interesting. Too bad he took off.

I love maple syrup and will allow myself to have a little when I can find some really good stuff. I hope you'll post about what you find. :-)

Very interesting. Too bad you did not get to talk to the man.

Maple syrup production is full bore here, and the warm days and freezing nights are perfect conditions. We have big producers whose taps empty into hoses that empty into a collecting tank. And, we have family stands that have old milk jugs under the taps. I love seeing it.

oh how interesting. i have maple trees, i am going to google this and read about the details!!

I always assumed you only did one tap at a time. Very interesting.

I use to have some friends in Vermont who used to tap in to their maple trees. The maple syrup was great on french toast. Now I want some. :)

How fascinating. I really look forward to learning more - and hope that the gentleman isn't so quick to disappear next time you head out that way.

Maple season is in full swing here in our area as well. I love seeing the buckets hanging on the trees.

That would be pretty neat if you ended up being able to buy some of the maple syrup from the place you saw.

No modern methods there AC. It works though.

I would have loved to speak with him Linda.

I will visit a store which carries local product Jan. Photos to follow.

Love maple syrup in a variety of recipes. A pinch in salad dressing is delicious.

I know. Maybe another time Mildred.

I’d love to see one of those modern productions, Joanne.

Maybe you could tap your trees, Debbie?

I didn’t have any idea how many taps a tree could have Barbara.

It is yummy on French toast Bill.

It is a short season EC. I hope to find some of the local product.

This place was a small family production from what I could see, Danielle.

My grandparents lived in Brattleboro, Vermont and they always tapped their trees and made their own maple syrup. The room where they boiled the sap was connected to their kitchen and was also my Granddfather's shop where he made furniture. I will never forget the wonderful smell of sawdust and maple and have never experienced it in any other place. Thanks for reminding me of that.

I use maple syrup quite a bit but it is not cheap here. Cheers Diane

That's cool. I saw some on my walk yesterday!

We see a lot of it here this time of year. As long as the nights go below freezing and the days are a few degrees above, the sap will run.

How neat to come across this scene close enough to the road to photograph it. I tend to picture tapping being done in the middle of nowhere!

What a great memory Ginnie. Thank you for sharing!

Maple syrup is not cheap here but cheaper than it is there I imagine Diane.

I’d never seen tapping before, Karen. I never saw it in Newfoundland but I know it’s done there too.

It’s been perfect conditions here the last week or so William.

It is indeed, SW.

It was in front of the family home, Jenny., not my idea of the setting either. Great to be able to see it though.

Interesting! I wonder how different it tastes fresh out of the tree?

I wonder what the sap tastes like too, Jenn.