It’s been hot and humid so we recently spent a day at Cavendish Beach with our daughter and the kids. A sea breeze was a welcome relief. The children enjoyed the water and sand while the adults enjoyed time outdoors under umbrellas. We also had visitors while we were there.

The picnic blanket our daughter uses is an old quilt. It is large and heavy, perfect for the location. It has plain blocks of various colours on one side and is red on the other. We spread it out with the block side up.

Within five minutes, two Blue dashers found the quilt. They were interested in the blue, turquoise and denim blocks. 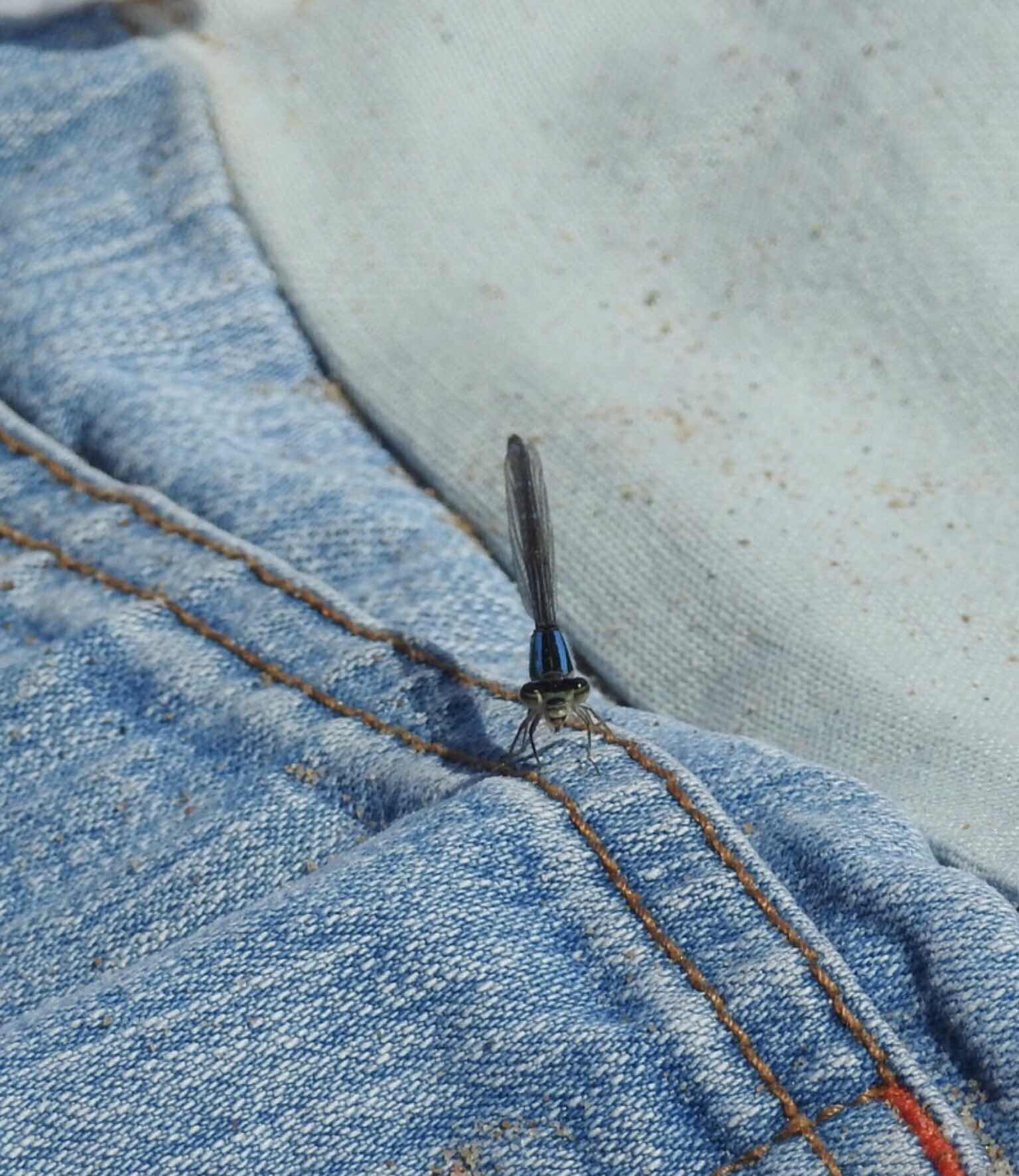 They hovered above the various blue squares as they flew around the quilt. After a time, they landed on several of them. 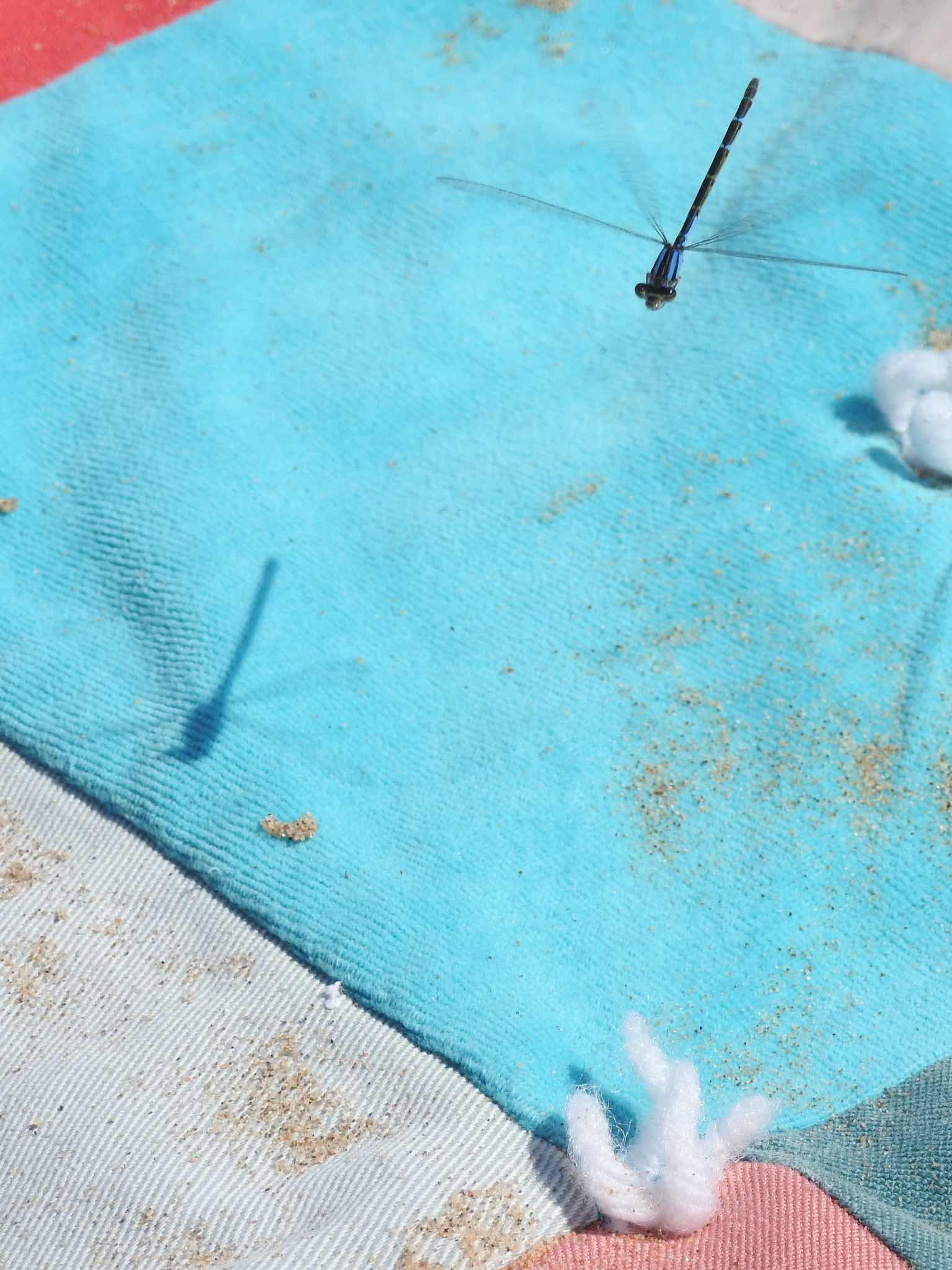 The kids were interested in the insects but didn’t want them around during meal time. We turned over the blanket to the red side and the Blue dashers were not seen again.

Did the insects think the various blue blocks were water? We can only guess. They were an interesting addition to the day at the beach however. 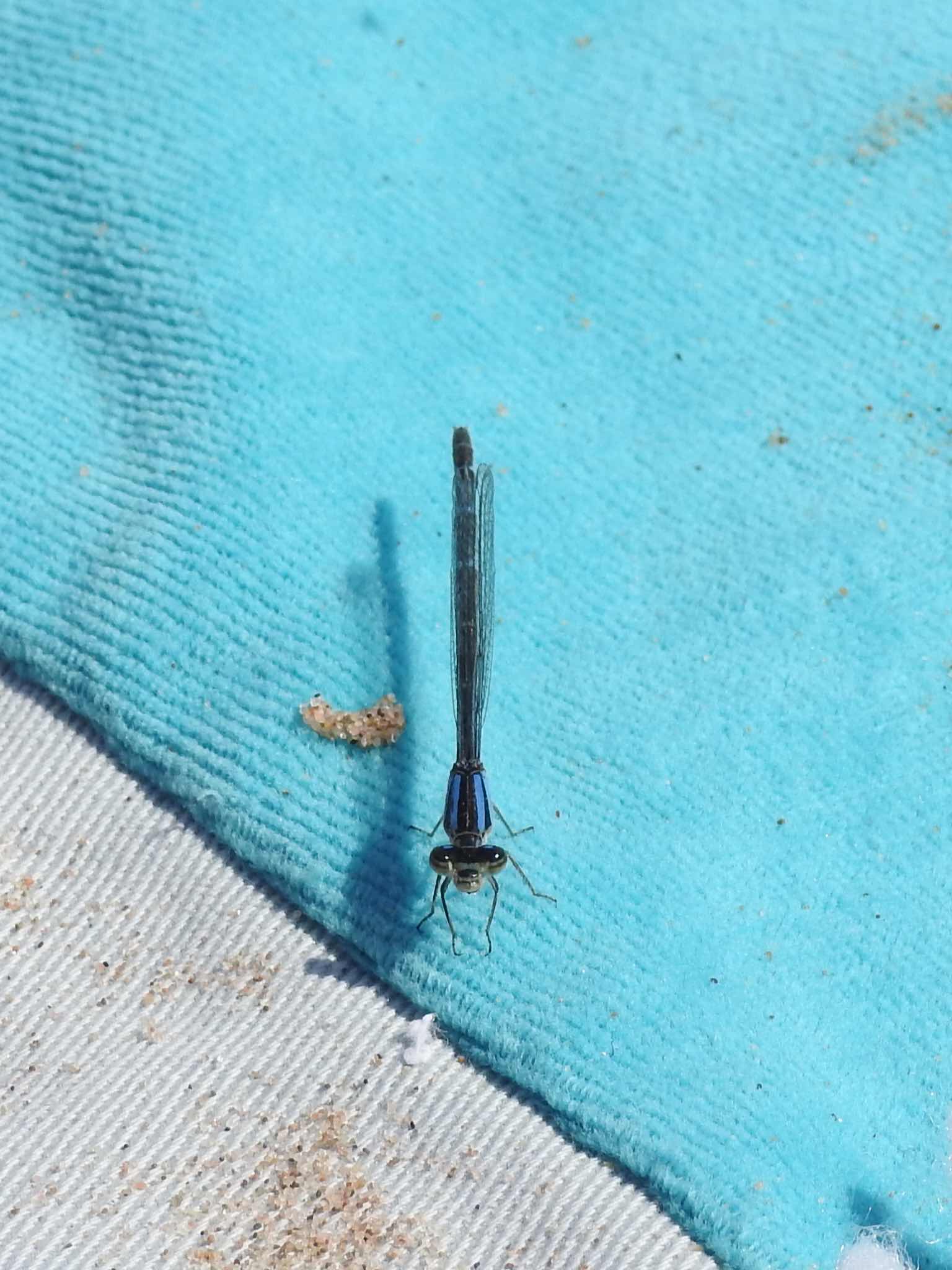 WOW. That's so interesting, Marie. I bet you're right about the blue, since they seemed totally unintrigued by the red. It does make you wonder about color and how it lures the insects. Not too long ago a butterfly was attracted to my strawberry-blonde hair. I really wondered what THAT was about! So cool when we see this happen.

How fascinating Marie, your theory certainly seems to be feasible. Sounds like a lovely family day out by the beach. Happy weekend ✨

You do wonder what their thought processes are about such things.

Interesting observation, Marie and I was wondering if they are colour blind. Nice close up of the dashers, the second one looks like it is looking right at you. I think when I was young, we use to call these dragonflies. don't know if they are the same as the dashers.

Oh my gosh, these area great shots. Like he's posing for you.

Interesting that the colour attracted them, I wonder if they did think water? Here we call them damselflies. Enjoy your weekend, Diane

They are interesting little creatures. I'm sure they were attracted to the color, probably thinking it was water. Aren't they usually around water? Great pictures of them! :-)

Great shots of the irridescent charmers. And how fascinating that they are drawn to the colour blue.

these images are crisp and clear, with so much detail!! i have been seeing a lot of these dragonflies this year, much more than usual!!

A day at the beach sounds wonderful, and the lovely quilt blanket a treat that the insects enjoyed as well, quite fun to watch them I'm sure! Great pictures as always Marie!

How interesting. The blues were attracted to the blue.

What a fun story. Didn't know those things were called Blue Dashers. YOu learn new things everyday. Sounds like a fun day was had by all. Your theory about them thinking the blue was water sounds reasonable to me.

I agree Ginnie. Colour and insects is fascinating.

It was in redibly hot Grace. The umbrellas helped the old folks.

Wonder how much thought they have William?

We didn’t have these blue ones around when I was growing up Bill.

There are many variations of these type insects Diane.

They are usually around water catching other insects Jan.

They are pretty little creatures!

It was amazing how the dashers hovered Debbie!

They were indeed AC.

It was a great day at the beach Sandy, dashers and all.

I love these delicate creatures of God! Very sweet! Hope you have a great Sunday Marie!

They are a beautiful part of creation Angela.

Interesting creatures. I don't want to call them bugs lol, that seems too harsh. Lots of dragonflies around right now, I like seeing them. I don't think I have seen the Blue Dasher variety though.

No they are not Catarina.

I was not familiar with them prior to this encounter Jenn.